At the Civil War Statue built in 1909 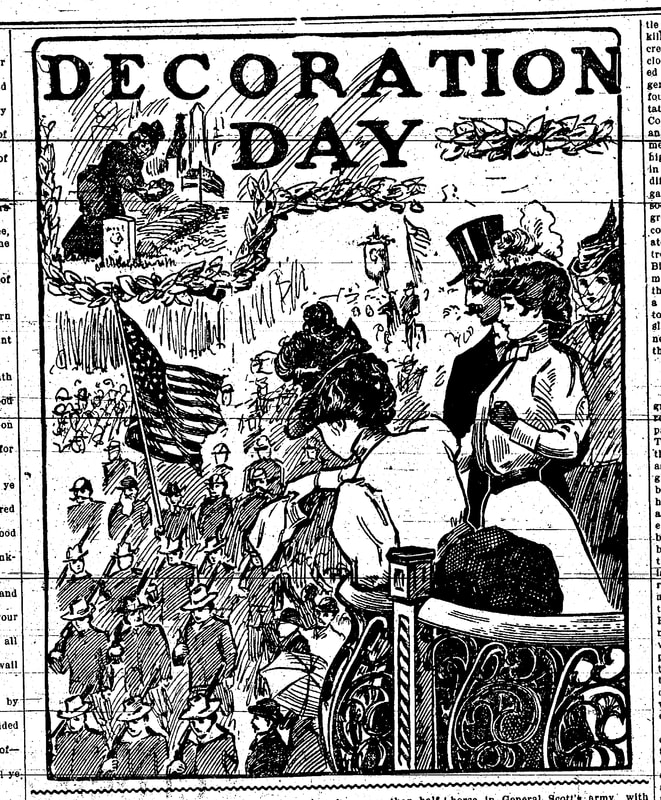 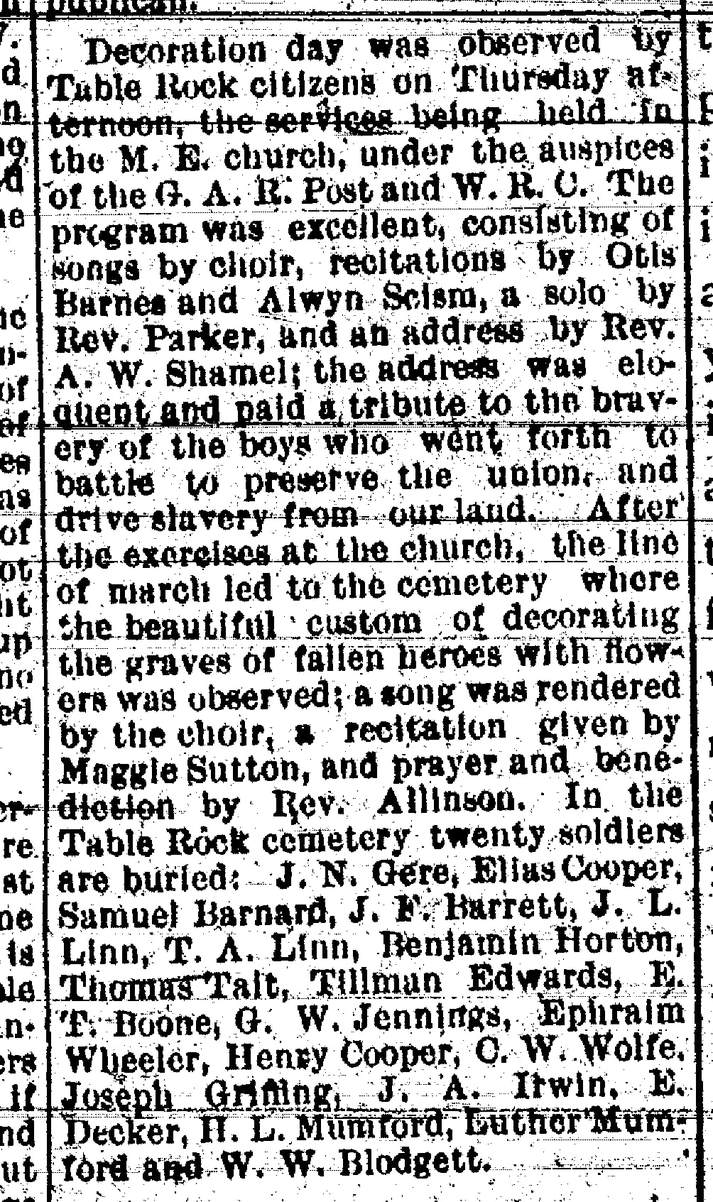 Then, under the command of the officer in charge of the day, Union and confederate veterans, the ladies of the Women's Relief Corps, and Spanish-American veterans formed up to march the Table Rock cemetery.  At the cemetery, "old soldiers accompanied by children" decorated the graves.  All then formed up and marched back to the opera house.

There were not so many veterans' graves in those days, of course.  An undated listing in the Table Rock Historical Society's papers lists 45 veterans in the cemetery from the Civil War and 6 from the Spanish-American war.  Five civil war veterans were still alive at the time of the list, their names heading the list.  The last died in 1941 so the list was probably compiled in the 1930s, or based on information from that time. 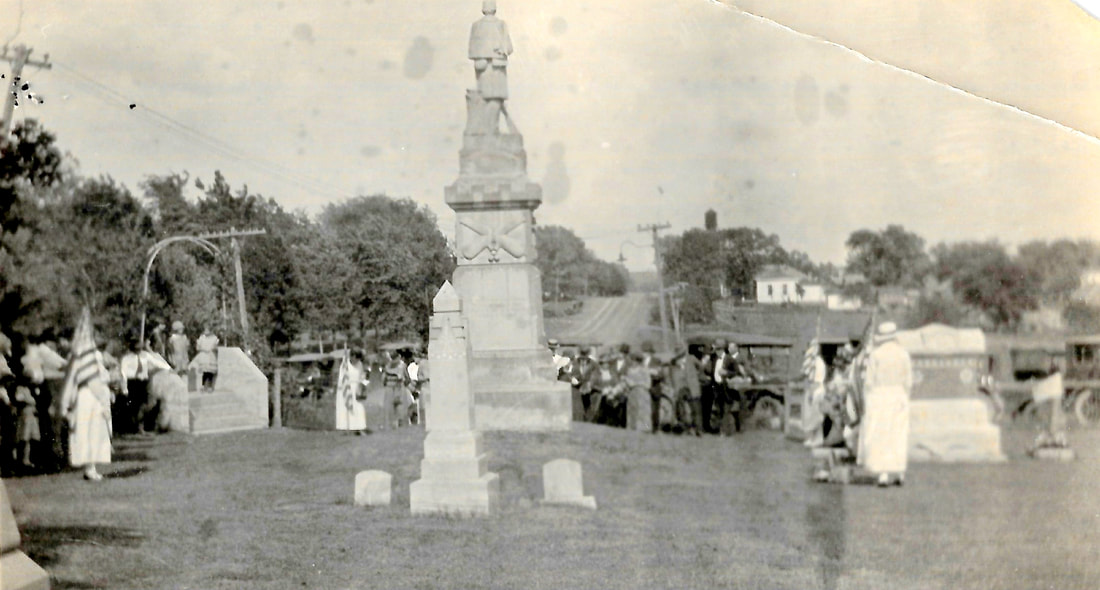 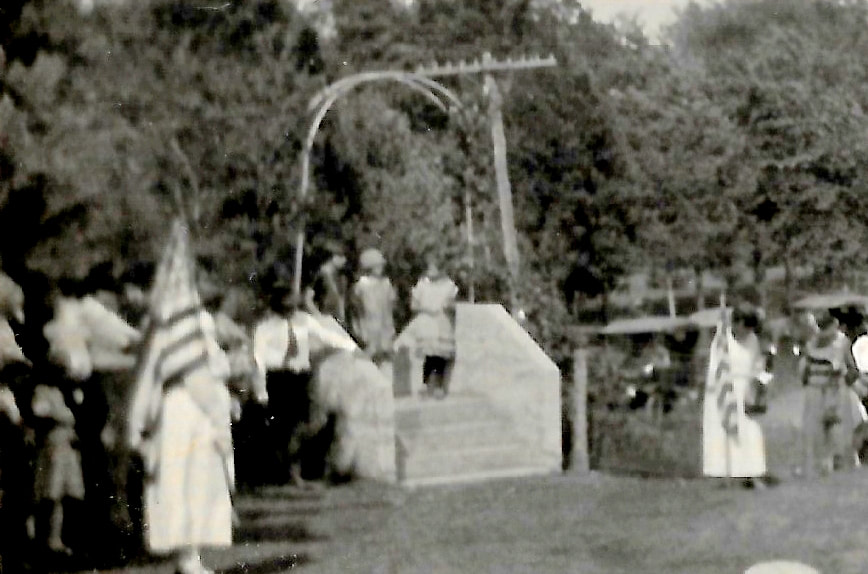 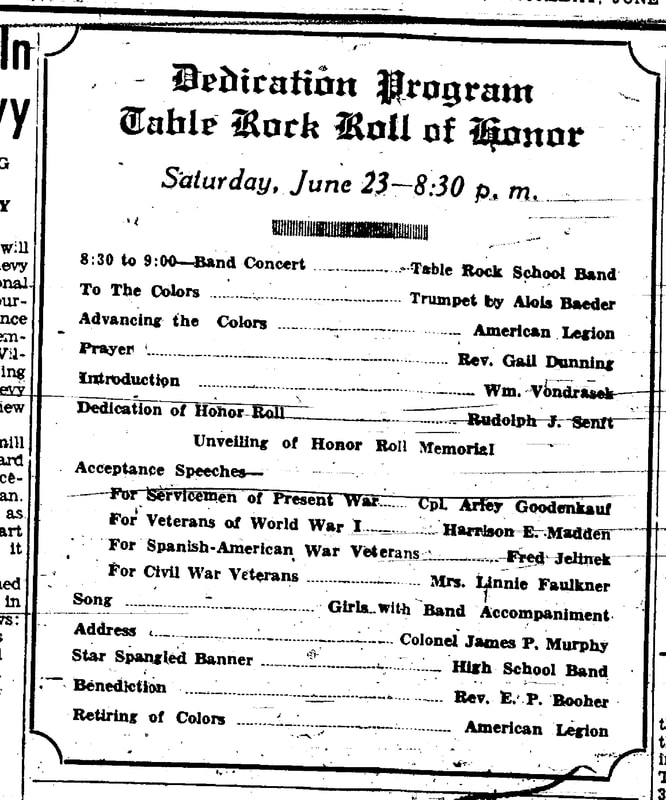 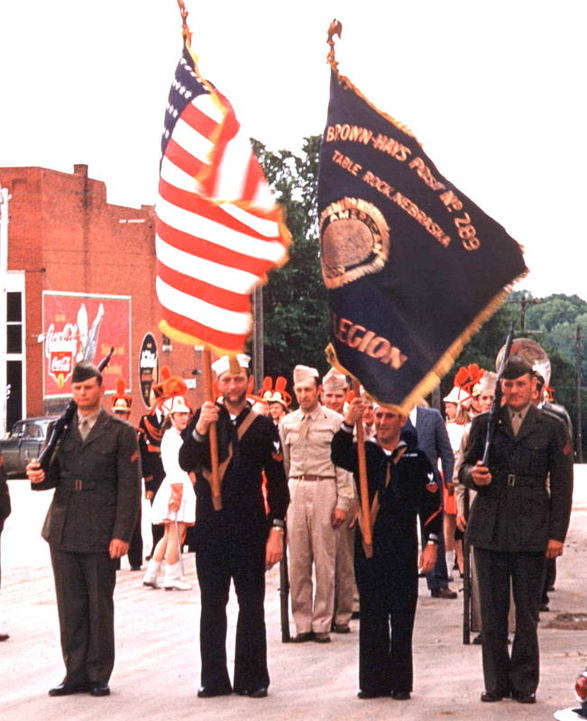 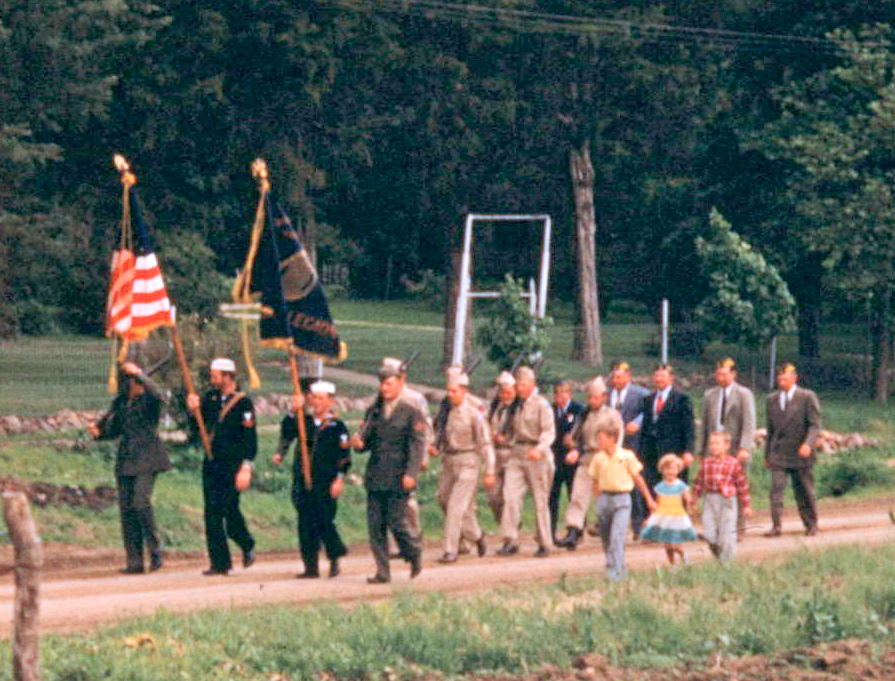 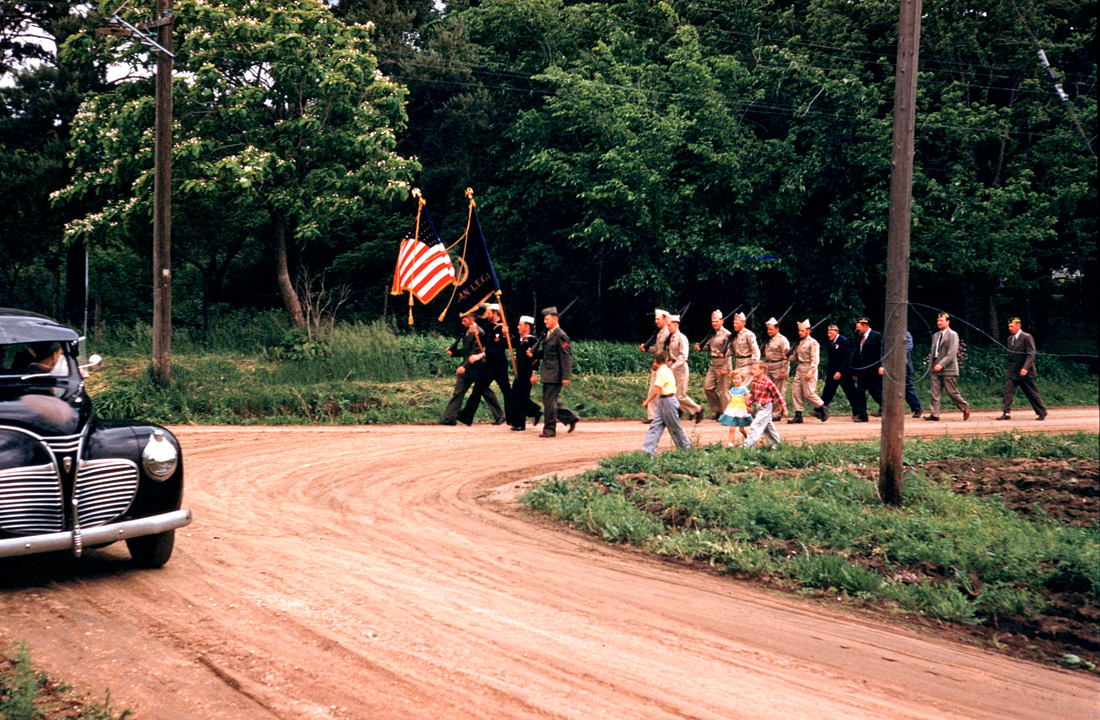 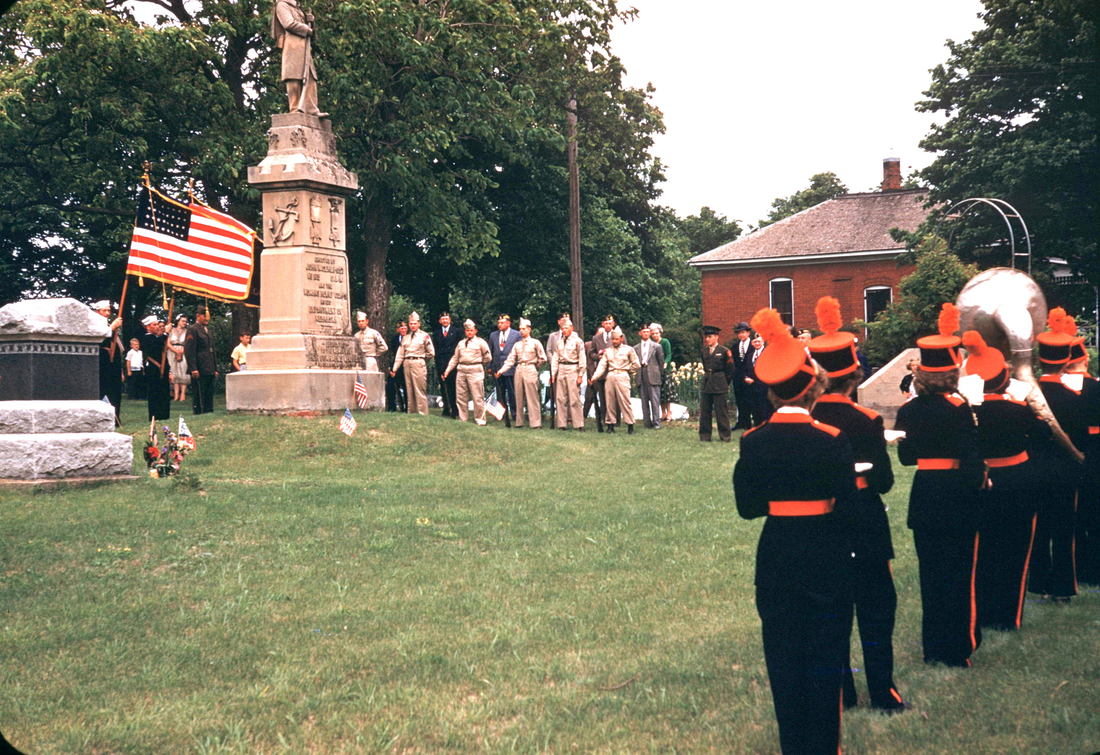 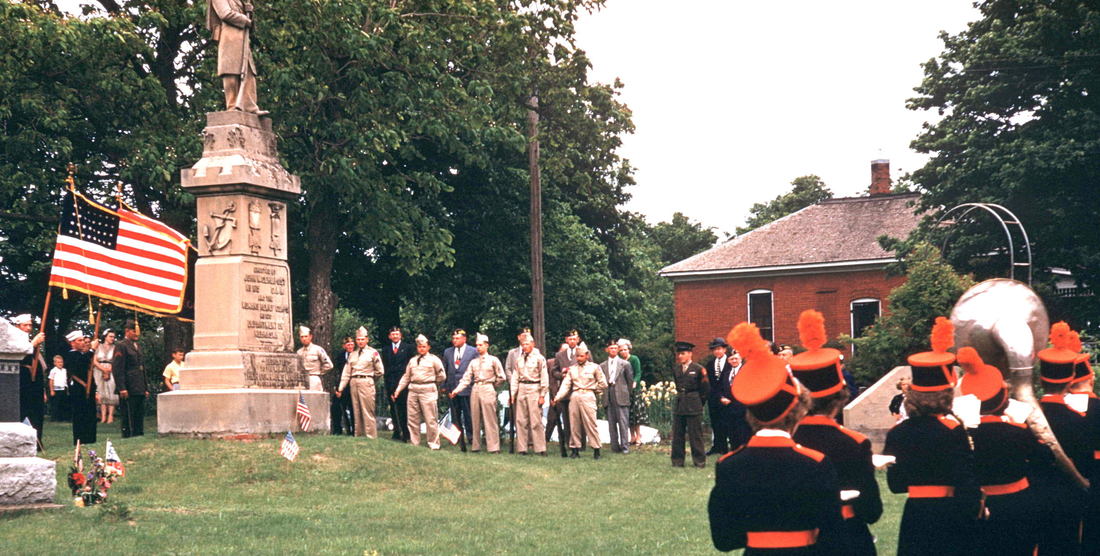 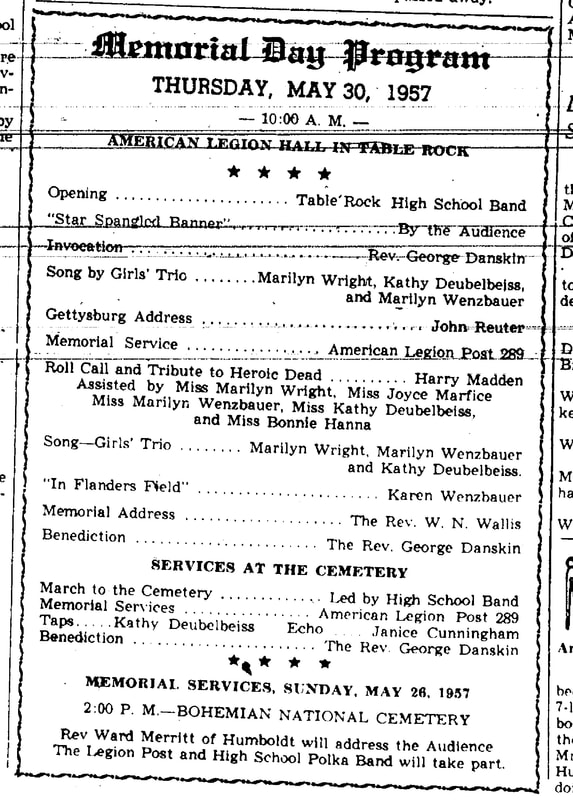 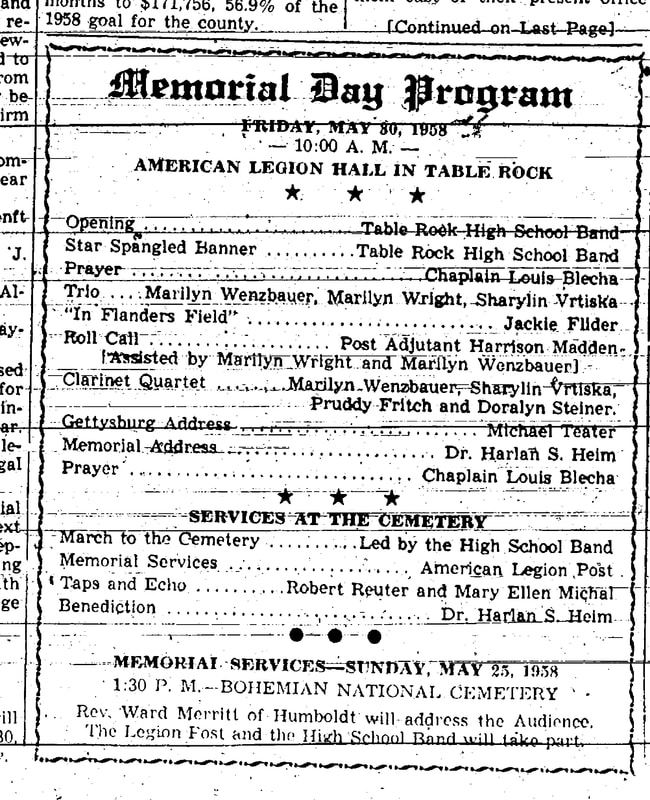 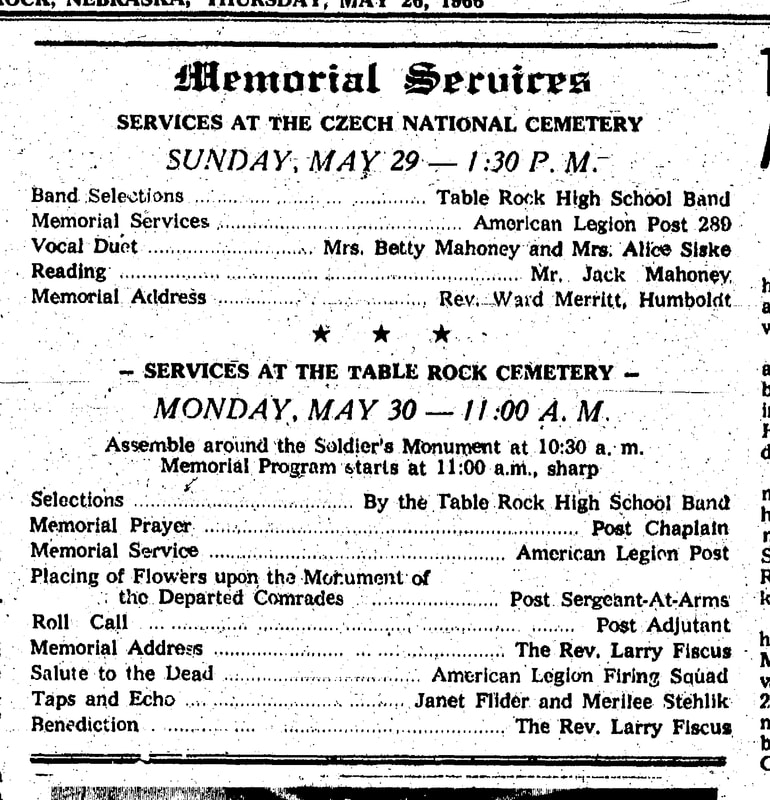 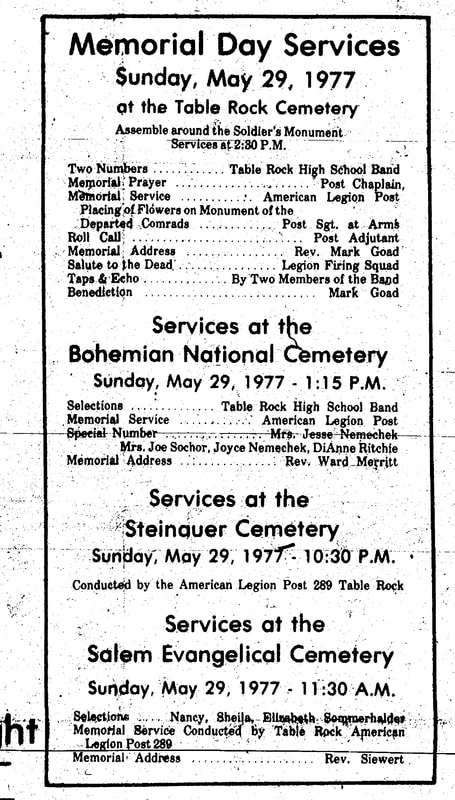 These Memorial Day photographs were taken in 2007 by Irene Penkava Blecha and shared by Delores Penkava, her sister-in-law, who shared them with us.  They were taken both in the Bohemian Cemetery east of Table Rock and also in the Czech National Cemetery south of Humboldt.  They are assembled here together because both draw from a common culture.  A Reconnaissance of Historical Sites in Pawnee County cites to those on the Richardson County side of the line, too, calling the entire group as the Nemaha River Bohemian Settlement. 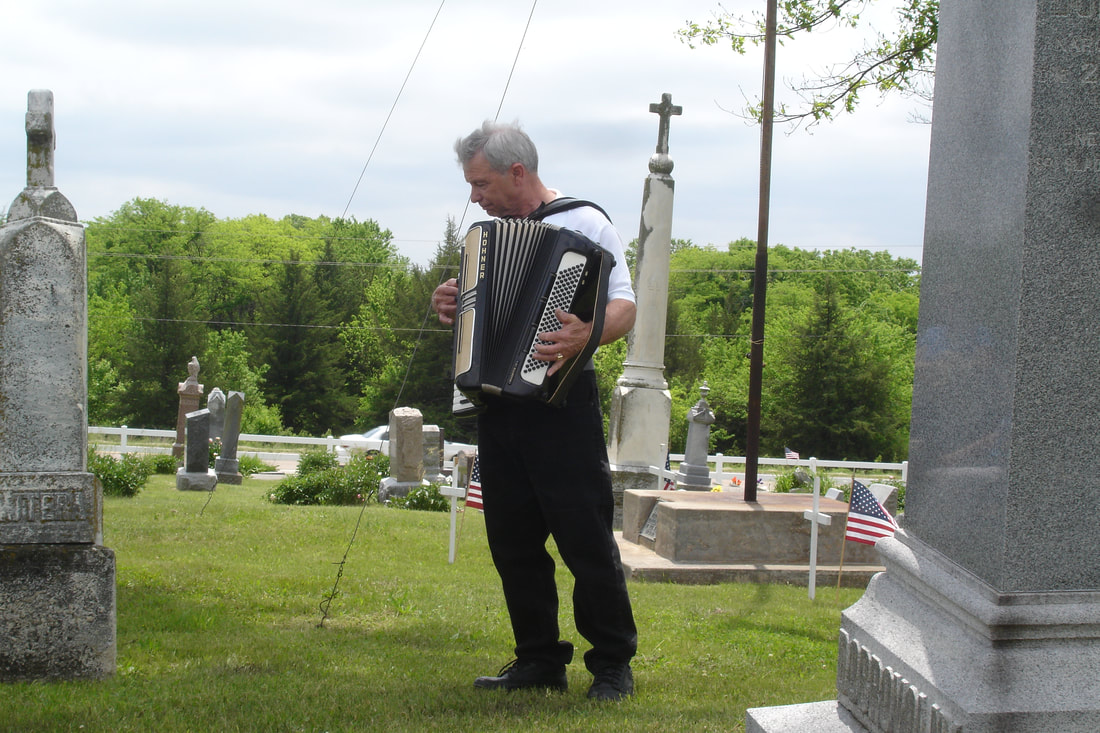 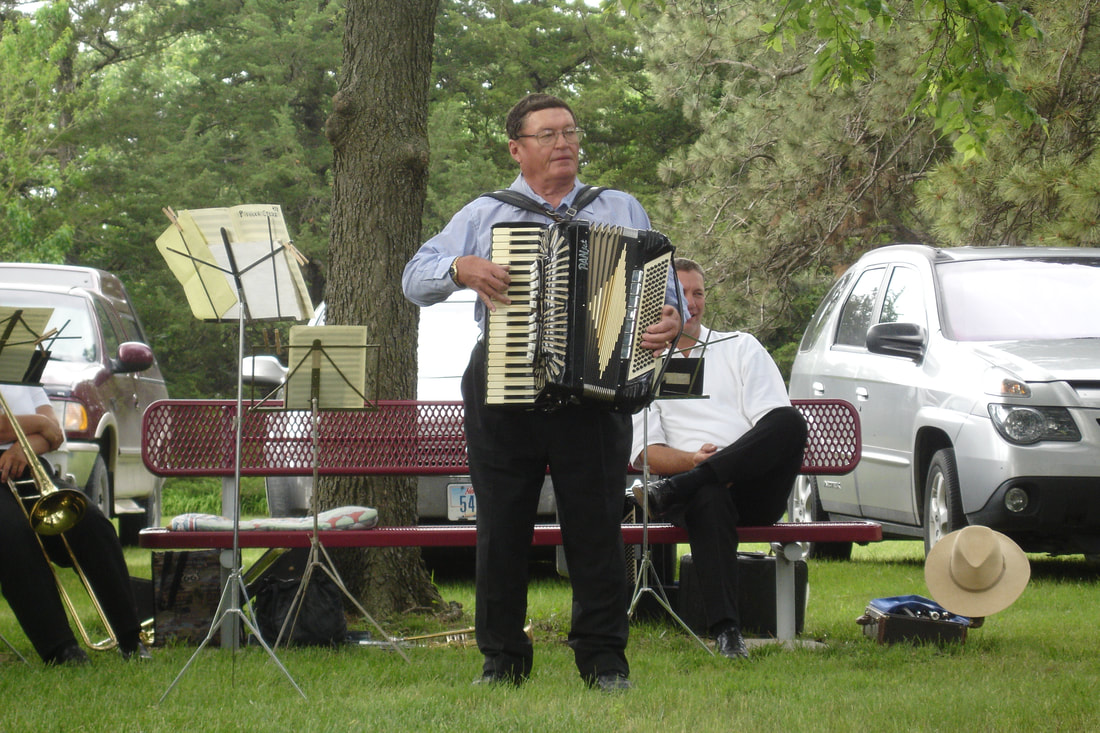 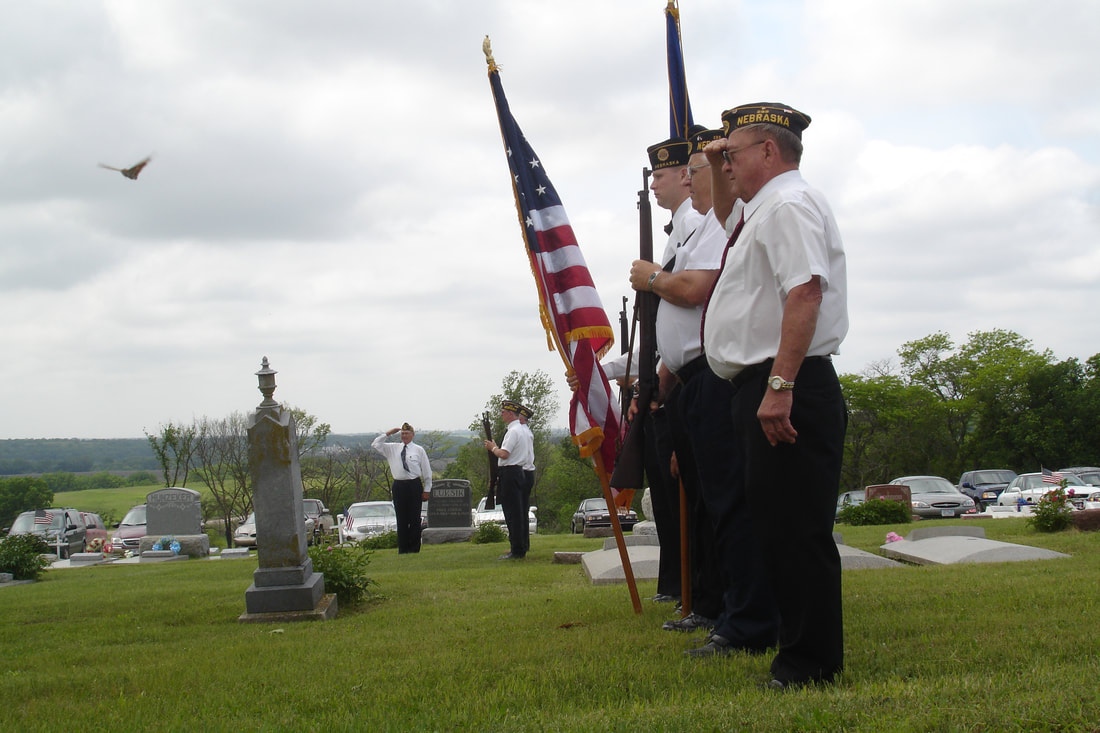 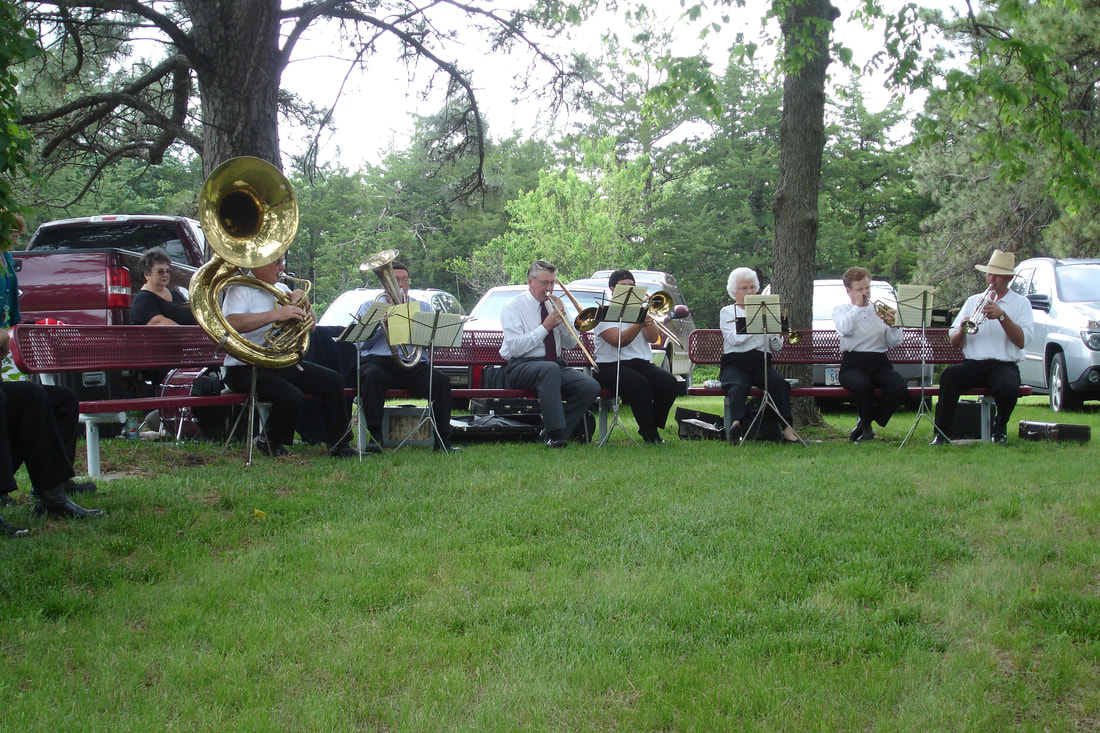 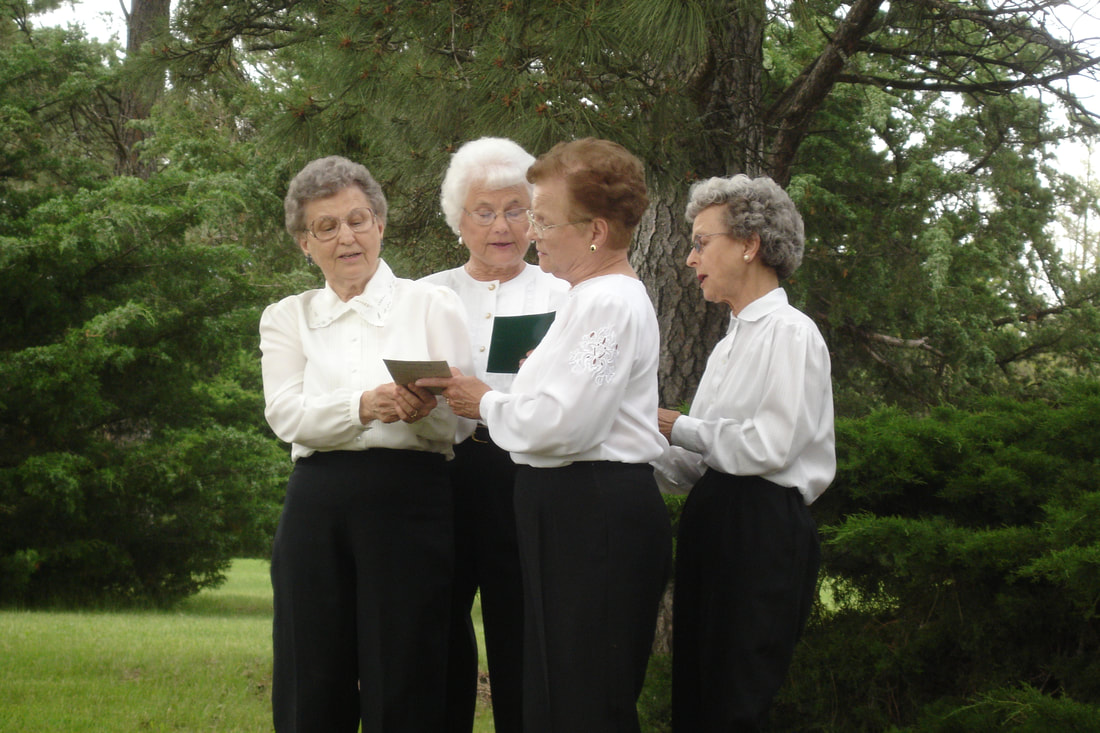 At the Czech National Cemetery 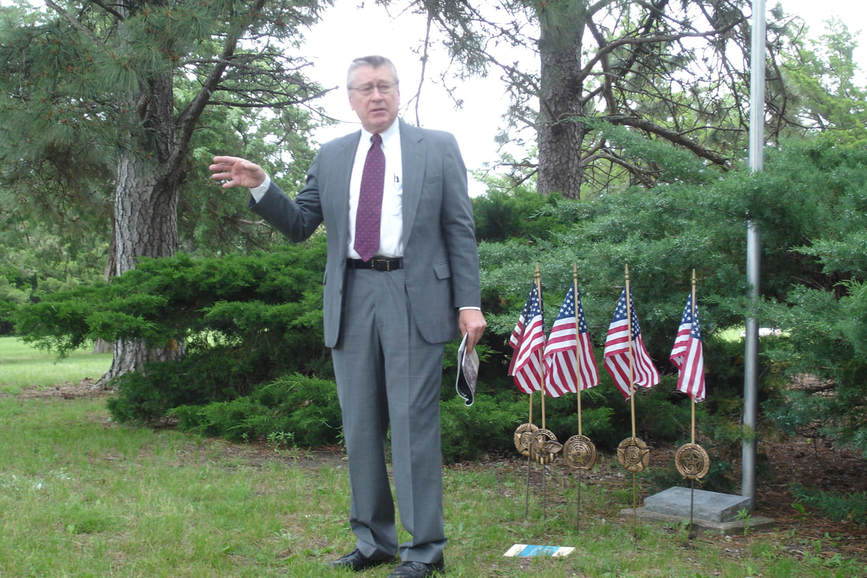 The statute in the northeast corner of the cemetery 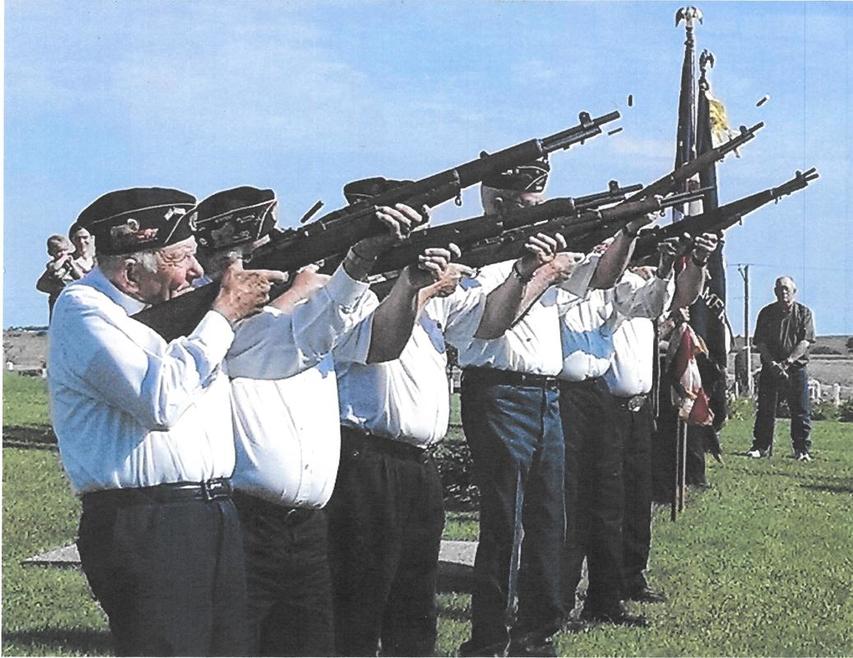 Lavon Covault in the foreground. Photo 3005, shared by Gregg Clement.

On Memorial Day weekend 2017, the Historical Society raised the burial flag of Clarence Morton in his honor. The flag, still in the box, his family too grief stricken to remove it, flew in Clarence's honor.  A moment of silence was held for this young soldier who was one of 11,000 surrendered to the Japanese at Corregidor; he died in a Japanese Prisoner of War camp.

That same day, the Historical Society coordinated a cemetery dedicating the new military tombstone of a young man from Table Rock who died in the Civil War.  The U. S. Army sent two soldiers to provide funeral honors for this fallen soldier, whose body was never recovered and for no military rites were on record. The Sons of Union Veterans of the Civil War conducted the ceremony and an appearance was made by the Daughters of Union Veterans of the Civil War as well.  The Historical Society arranged a riderless horse in honor of McNeal, who was in the cavalry.

Follow the links at the lower right to see some remarkable pictures. 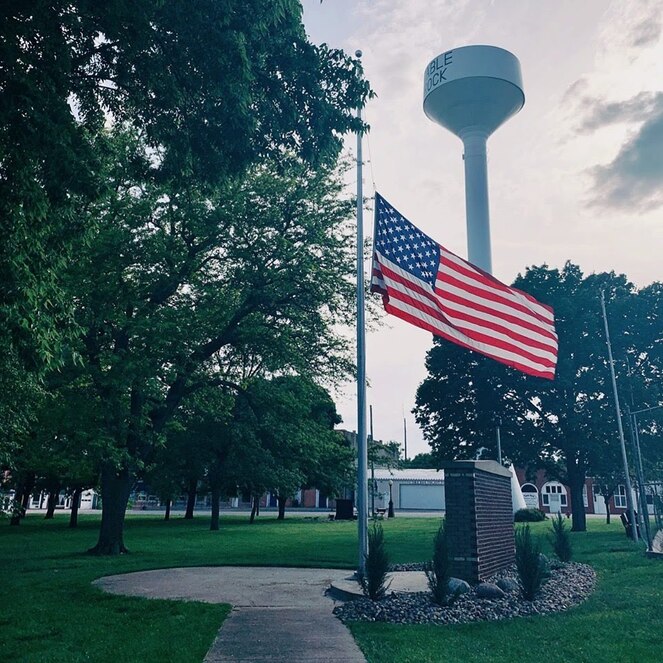 A stunning view from the Veterans Memorial in the Square, taken by Ken Edwards on Memorial Day Weekend 2019. Photo 6896.

at the table rock cemetery 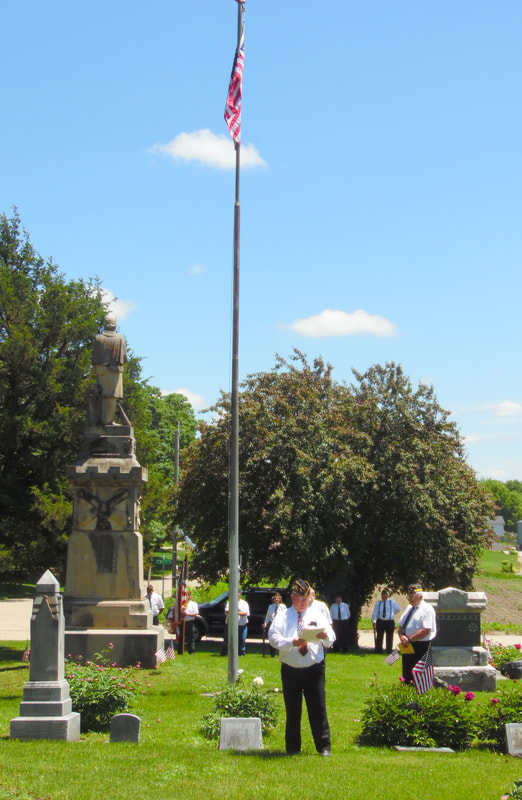 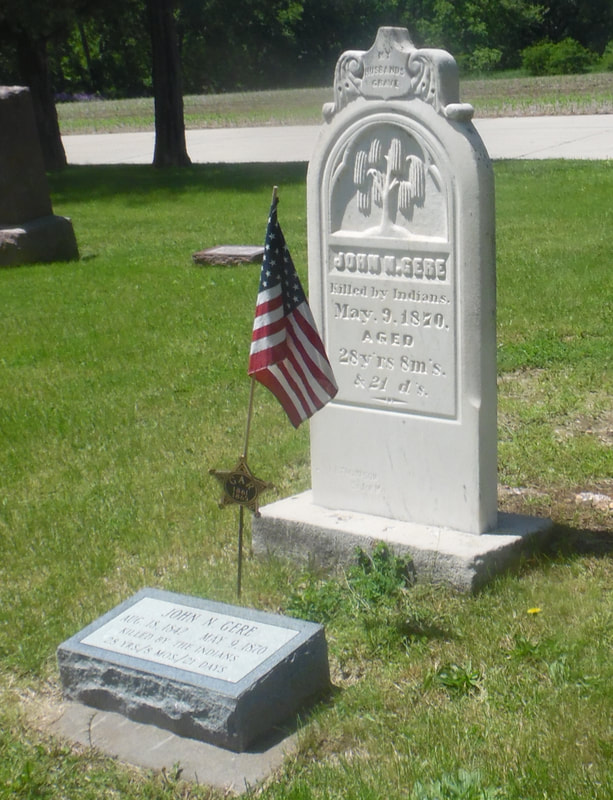 Civil War veteran John N. Gere. He came to Table Rock as a boy, in 1857. He served in the Civil War, married and had a child, and in 1870, when his wife was pregnant with their second child, was killed by a band of renegade Indians while helping on a friend's homestead in Kansas. 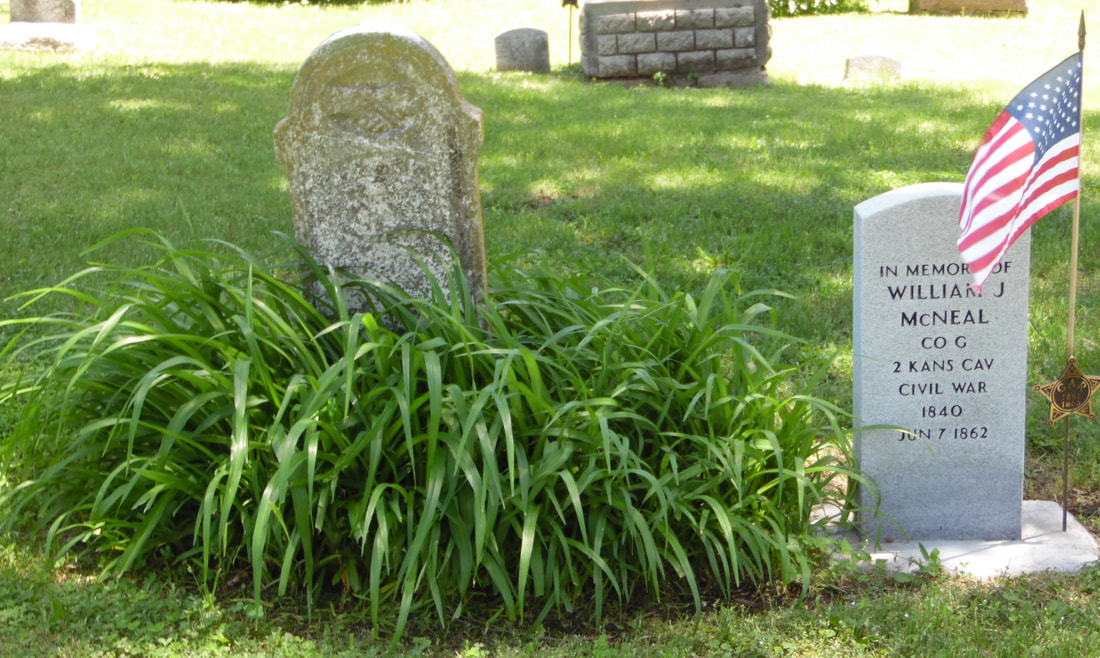 Grave of Wm. McNeal, to the right. He came as a boy in 1857. His father died in 1860. He and his brother enlisted and served during the war. Billy, as he was called, never came back -- he drowned at a river crossing near Ft. Riley, Kansas. His brother returned with a bride and had children, eventually moved away. Their mother Eleanor is buried to the left. 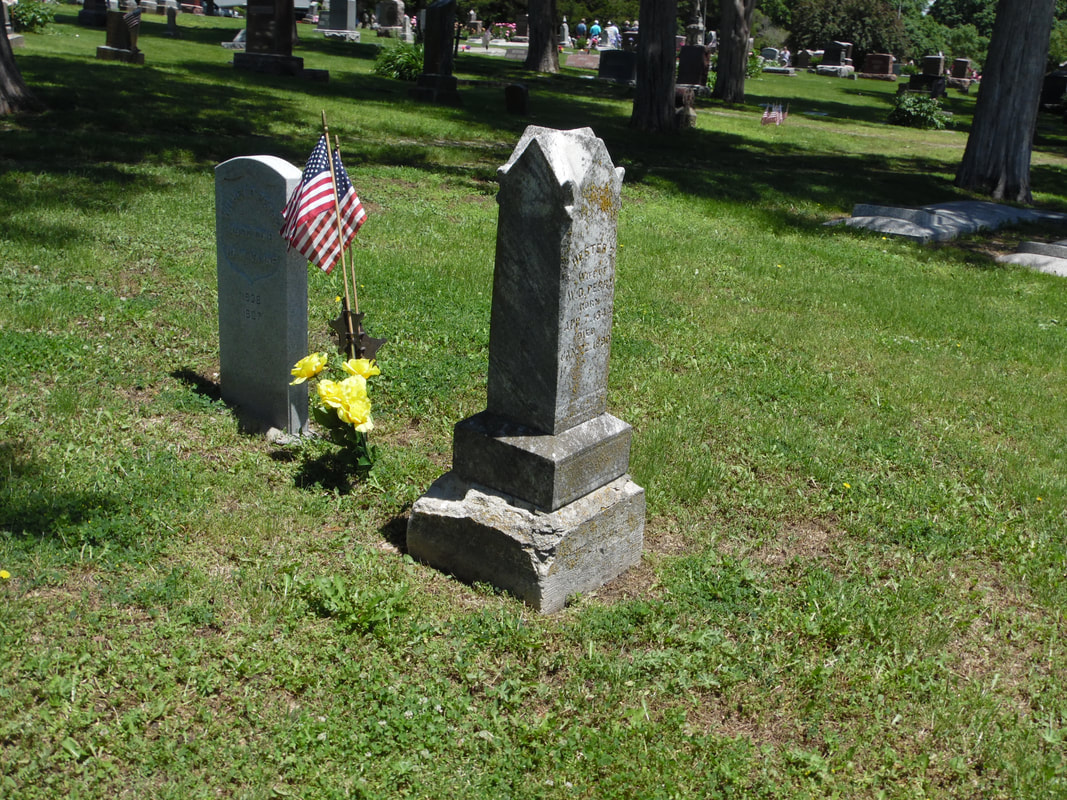 Grave of Civil War veteran Wm. Perry to the left. He served as a drummer for the 10th West Virginia. He was a prisoner of war in the infamous Libby Prison in Richmond before being transferred to a prison near the even more infamous Andersonville camp in Georgia.

​more at the table rock cemetery notice the beautiful avenue of trees, and the peonies just beginning to bloom, after a spate of cold weather. 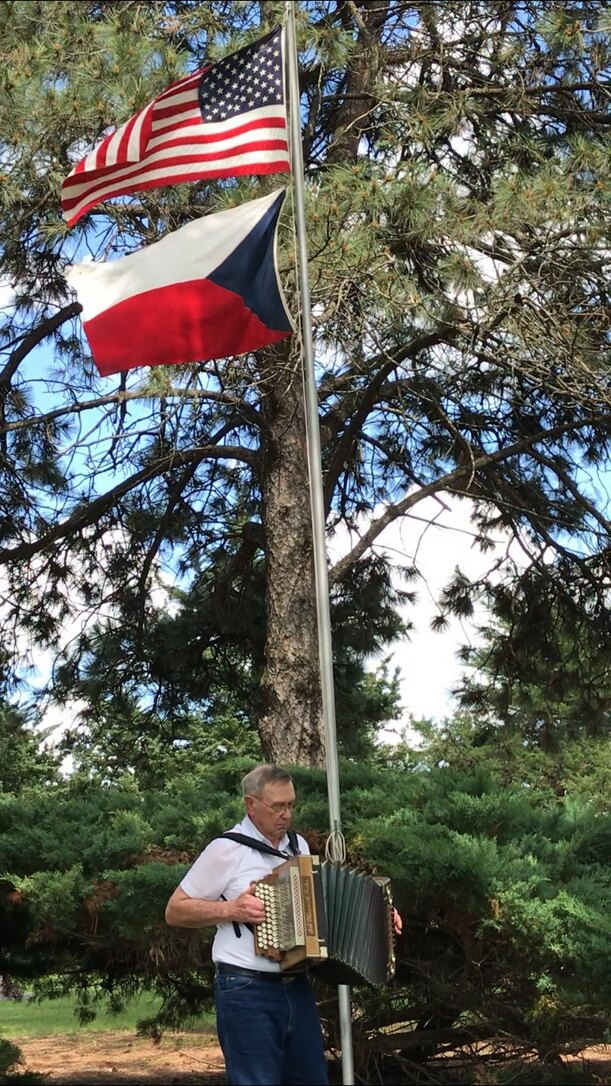 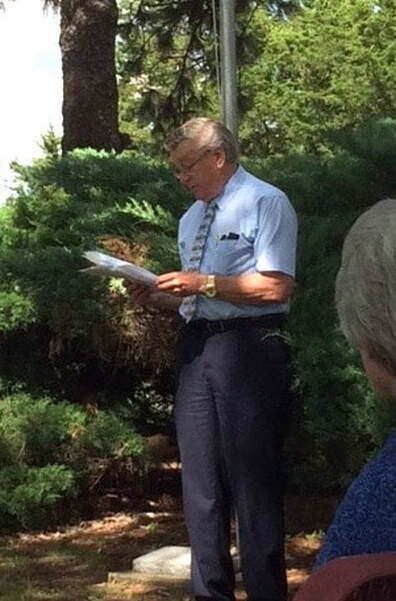 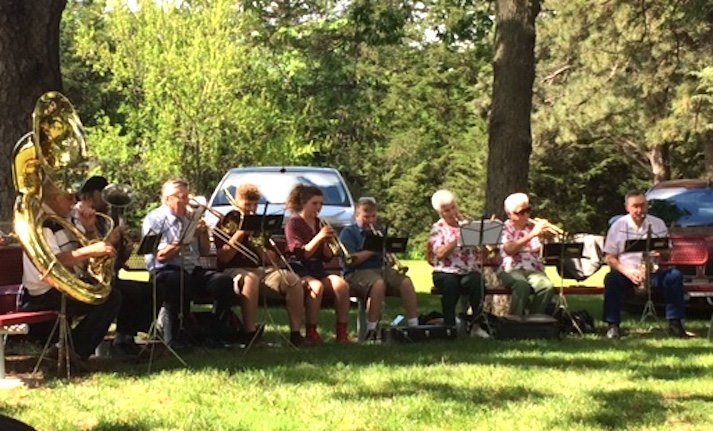 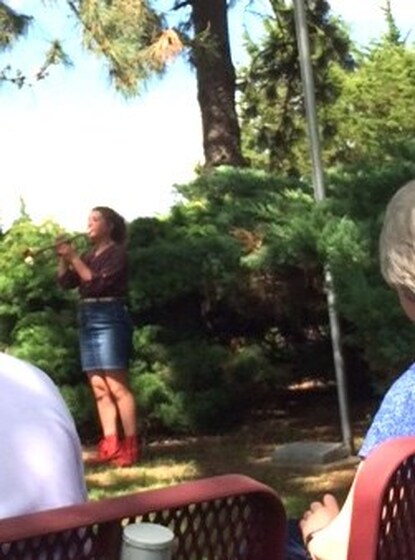