From the editor, Sharla Sitzman, a short introduction.  Corrections are always welcome, and further family information would be gratefully received:

Mother Juliana Gere was about 54 when H. H. died.  She married again in 1867; her new husband, Thomas McClure, was another of the early settlers.  Julia died in 1875 at the age of 73, cause of death presently unknown.  Her second husband died mysteriously in 1878 at the age of 82; he was found dead in the creek near town. It was theorized that he had been thrown from his horse and killed; McClure family tradition says that is a suggestion of foul play by persons unknown (per descendant Scott Bodie in 2016).

The daughters, Hanna Jane and Julia, died in the early days, still in their teens.  Hanna Jane died in 1857 and her mother wrote that she was the third person in the new burial ground (later the Table Rock Cemetery).  Julia died in in 1859.

Son John served in the Civil War and afterward married Lydia Giddings, who had arrived in Table Rock as a teen shortly after his own family.   John was killed at age 27 in an 1870 incident in Kansas when a renegade band of Indians caught a band of farmers unawares. John was with a group who were establishing homesteads in Mitchell County, Kansas, in an era where Indian depredations had been common.
​
Son George eventually became a noted physician in San Francisco. He died in 1918 at the age of 70.  We know that he married and had at least three children, Harrison, George, and Raymond, but we know nothing about the children or descendants other than where they are buried.

Son Charles (C. H.)_Gere was caught up in the events of the Civil War and served the Union before he was finally able to make his way to Table Rock after the War.  By that time, his father and two sisters had died, his brothers John and George out on their own.  He stayed with his mother a short while then set himself up in  Pawnee City and then Lincoln.   He was a notable in politics, and even more notably he established the long-lived Nebraska State Journal.  He had at least children; again, we know nothing about them other than where they are buried. 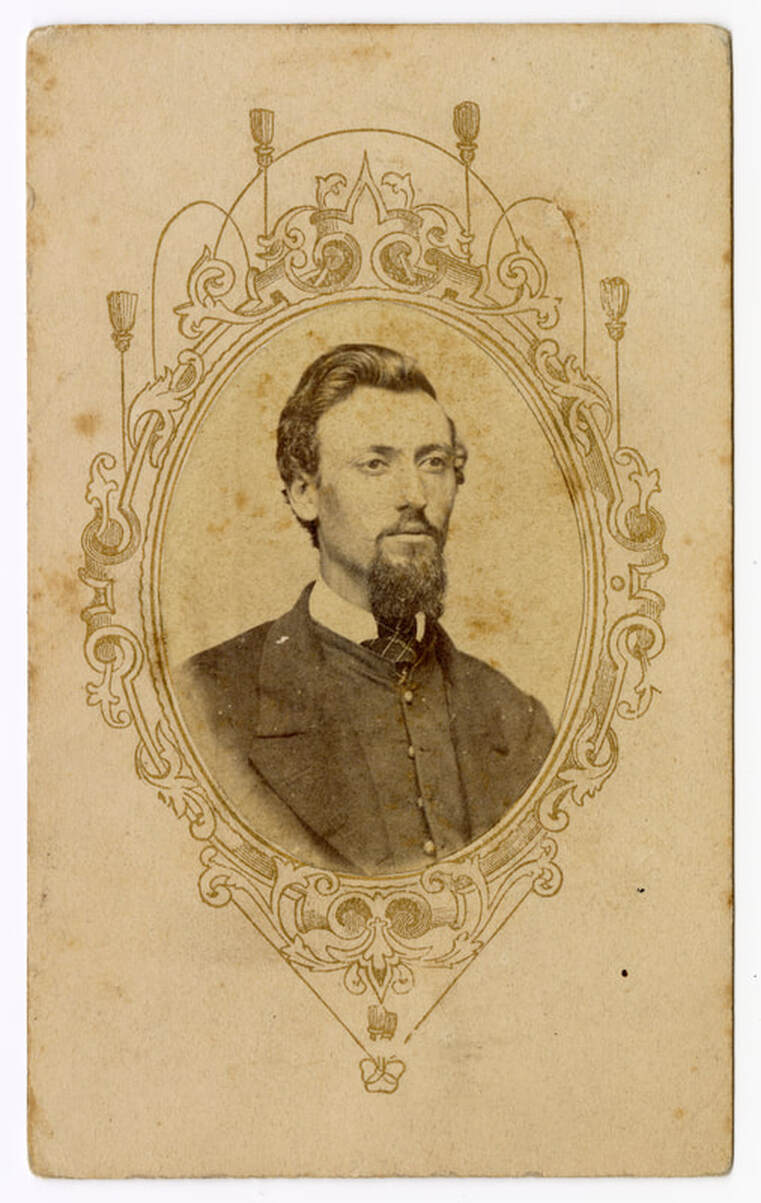 1869 - at the great nemaha indian agency

The two men in the back are not identified, but Giddings descendant Jon Voils, who locate this photograph, suggests it may be John Gere.  We tend to agree.  The second gentleman from the right is rather short; it would be interesting to secure his military record and ascertain his height.  The unidentified man at the right is readily identified as Indian agent T. Ross Williams, whose photograph was taken separately by the same photographer, Zeno Shindler, in a photo dated 1868.  The man seated in the front center is readily identified as C. H. Norris, and again he appears separately in a photograph by Shindler dated 1868, as does the man in the back far left   That man at left back is identified in the separate photograph as "Big Brave (Pa-hatch or Elisha Doreau), an Iowa interpreter; he wears a felt hat, shirt, vest, suit and tie; and holds a walking stick in one hand and a cigar in the other."  These are all men who with whom John Gere would ahve been acquainted. 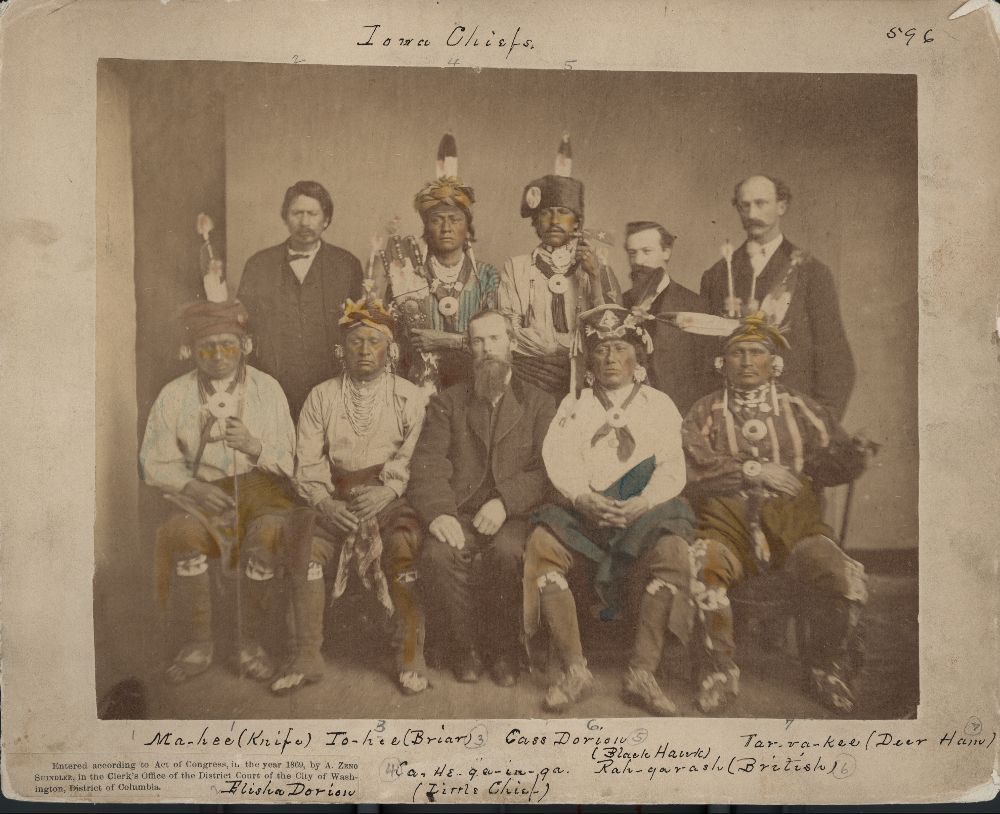 fannie's memoirs in her late years

John's sister-in-law Fannie was asked about John when she was interviewed for her memoirs as she approached the age of 90.  These are her recollections.  (Note that the year is off, as the event happened in 1870.  Note also that the recollection begins with his death, but then goes back.  John worked as a teacher at the Great Nemaha Indian Agency for a time in the late 1860s, he and Lydia living there. 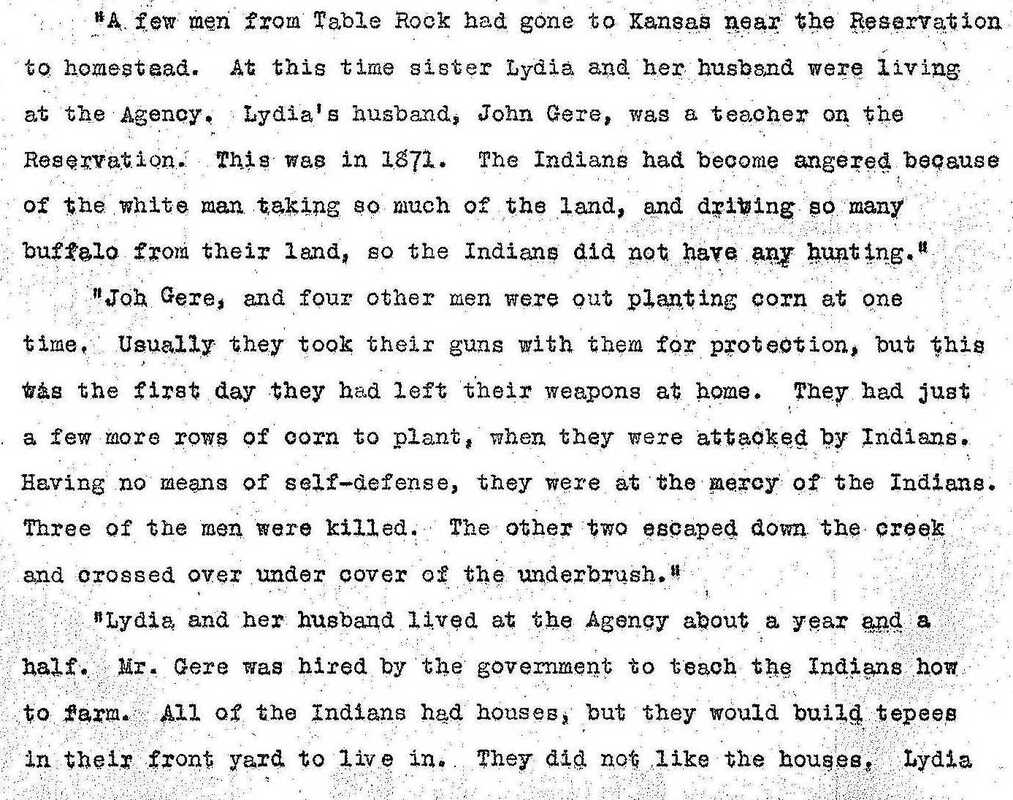 John Gere was the son of Horatio Nelson and Juliana Gere. He came to Table Rock with his parents and two of his siblings in 1858, brother Chester staying behind to continue his education.

When the Civil War broke out John volunteered to serve in the Kansas Cavalry on November 28, 1861. Serving until January of 1865.

John and Lydia Giddings were married in 1866 and were the parents of two children: Giles Henry and John Nelson, Jr. In April of 1870 he left his family in Pawnee City, Nebraska and went to northwestern Kansas to stake a claim on Solomon's Fork, in Mitchell county. He was killed by the Indians, along with two other men, near Glen Elder, Kansas. His belongings and body was brought back to Nebraska, and he was buried in the Table Rock Cemetery.

John and Lydia had two sons, Giles (who went by Guy) and John Nelson, Jr., (who went by Ned).  Lydia was pregnant with Ned when John was killed.

In 1883 a post of the G.A.R. was formed in Table Rock, in his honor that post was named after him, he was the first Union veteran buried in the Table Rock Cemetery

John's widow Lydia eventually married Aylwin Holmes, a civil engineer in charge of the new railroad line going west from Table Rock toward Denver; they had one child, daughter Laura, who never married. Aylwin died in 1884.  Lydia moved to the Kansas City, Kansas area, where she is buried. She died in 1941 at the age of 98, having outlived both husbands and both sons.  Only her daughter Laura was longer lived.  Laura, who was born in 1878, lived to see the year 1979.

Both of John and Lydia's sons eventually made their way to Hawaii following an 1894 visit by Guy during which Guy fell in love with the place.   Guy went to live there in about 1899.  He died in Hawaii in 1917 at the age of 49, following stomach surgery. His wife had died suddenly only a few months before.  They left three children, John, Margaret, and Giles; we know where those children are buried but nothing of their lives or descendants.

Ned went to live in Hawaii at that time as well, but we don't know what happened to him after that, or much of anything about his family or descendants.  Ned died in Honolulu in 1928 at the age of 57.  We do have this beautiful photograph of Ned and his children. We wish we knew descendants of those children..... 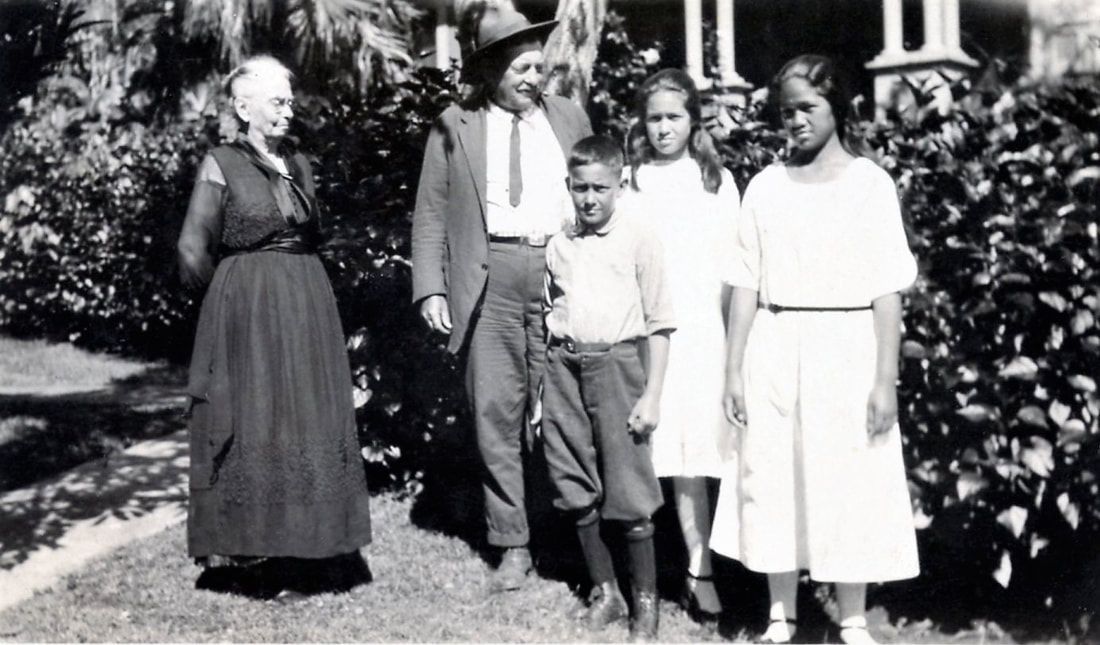 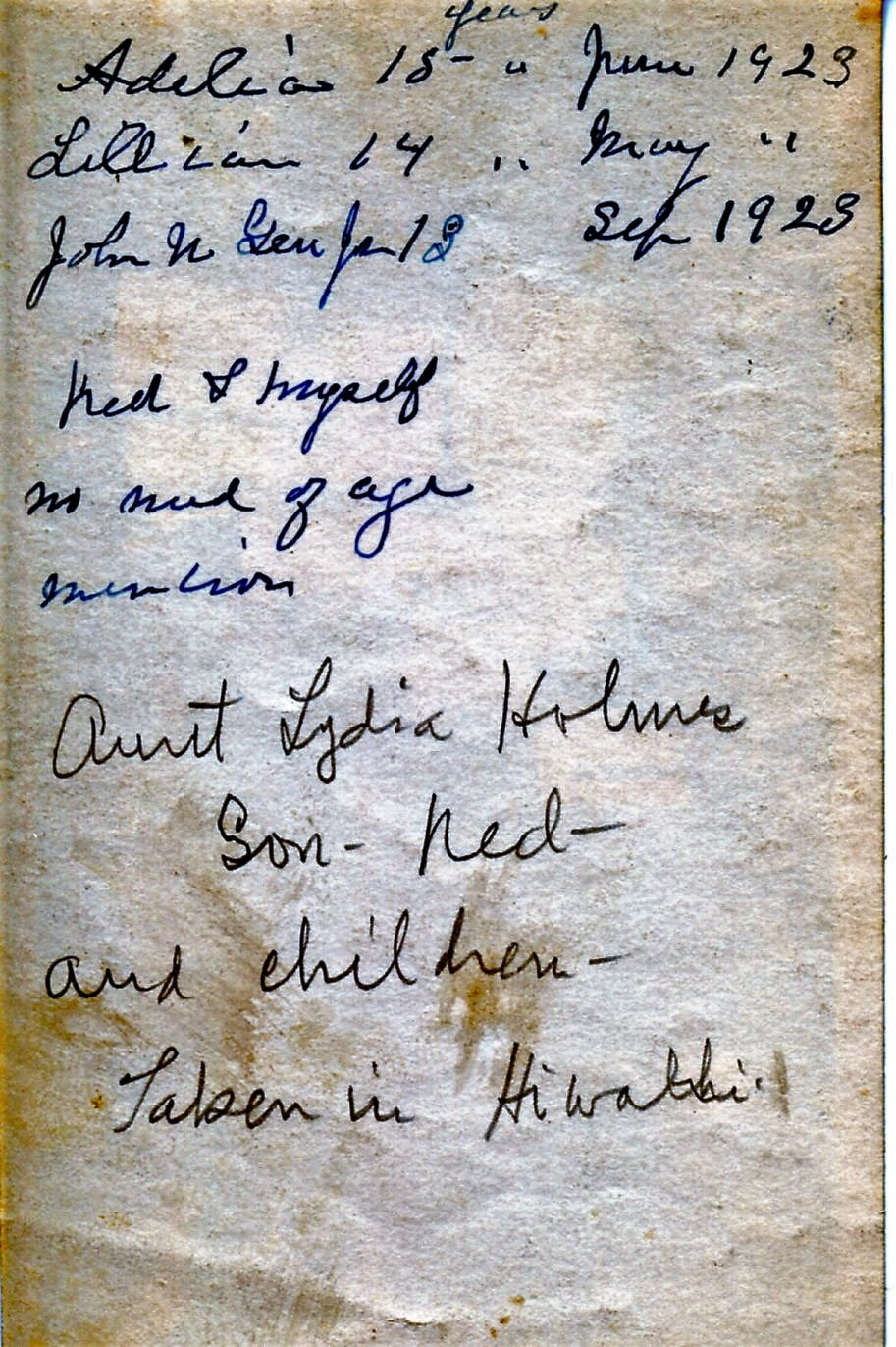 ​Here is an obituary for his wife from the Table Rock Argus.

Lydia Adelia Giddings was born in New York March 24, 1843, and died at her home in Kansas City December 13, 1941. She moved to Pennsylvania at the age of six, and came to Nebraska with her parents, the Rev. and Mrs. C. W. Giddings, in 1858, where the family established a home at the present site of Table Rock.

She was married to John N. Gere at the close of the Civil War and to this union two children were born, Giles Henry Gere and John Nelson Gere, both sons and her husband preceding her in death.

In 1872 she was married to Aylwin A. Holmes. Surviving this union is one daughter, Laura C. Holmes.

In 1909 she moved with her daughter into the neighborhood of the Westpoint Methodist church, where she was active until her death.

​Mrs. Holmes was well known here as her father, Mr. C. W. Giddings, was the founder of Table Rock and gave the land to the city for the park. Her first husband, G. N. Gere, was a Civil War veteran and was killed by the Indians in 1870. 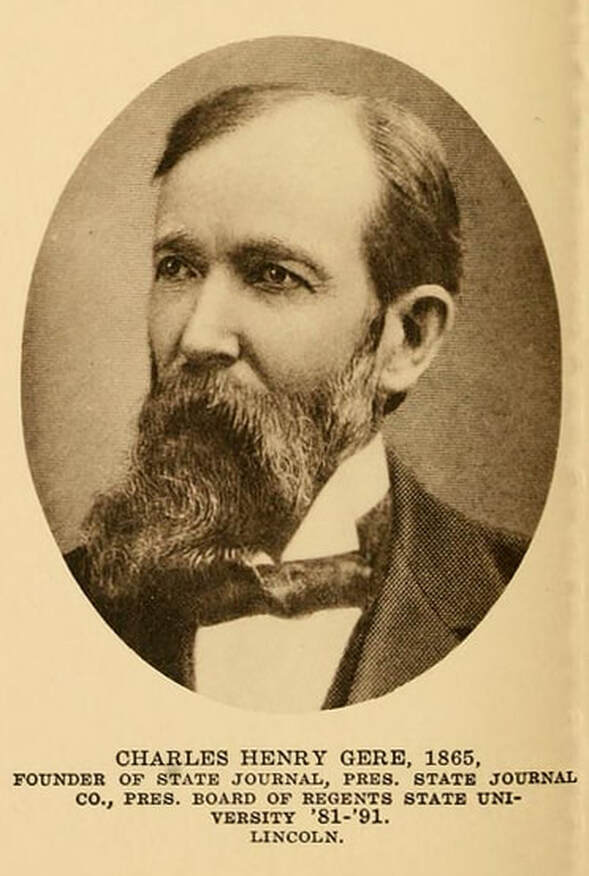 Hon. Charles H. Gere, editor and founder of the Nebraska State Journal, died at his home in Lincoln, on Friday evening. Mr. Gere was a brother of John N. Gere for whom the G.A.R. post of this city is named and whose remains are buried in Table Rock cemetery, as are also those of his parents. Mr. Gere began the practice of law in Pawnee City, and represented this county in the legislature in an early day. He was greatly interested in the education interests of the state and did much to place them on the high plane they occupy today. He abandoned the practice of law, and has been editor-in-chief of the State Journal since the establishment of the paper. Mr. Gere was past 66 years of age at the time of his death and leaves a widow and three daughters. 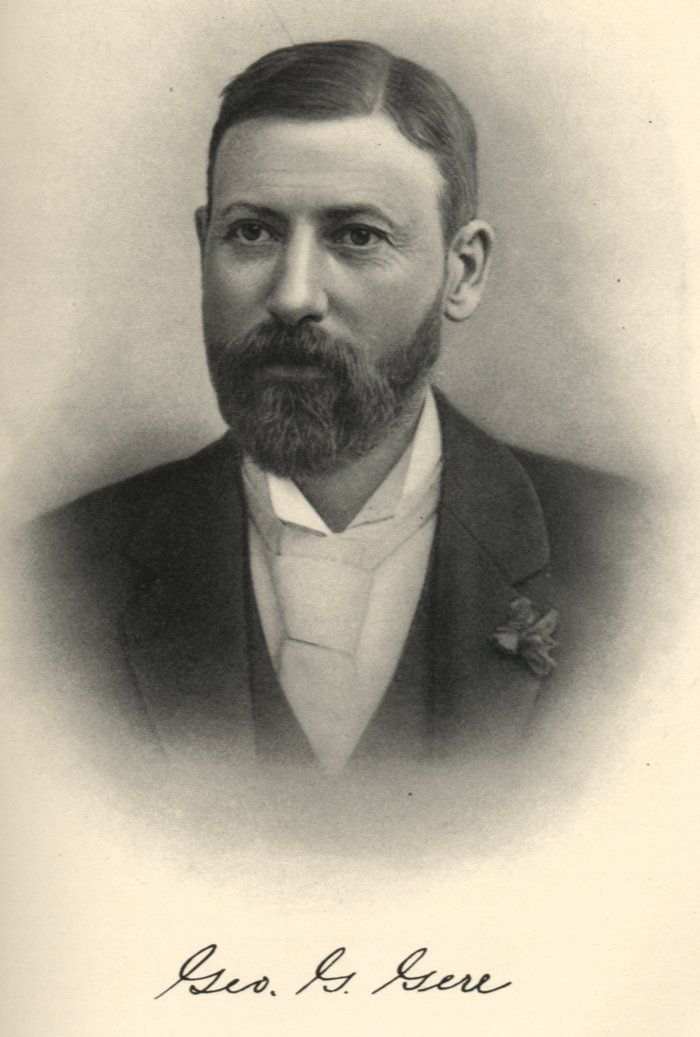 Photo 10004, George Gere Grant, found by Louis Roth in the History of New California. Roth is a dedicated FindaGrave.com volunteer who chipped in to help with some of the Gere history.
From FindaGrave.com:

]Father: Horatio N. Gere
Mother: Julia Grant
Wife: Josephine Wood (married 1891)
Son: Harrison George 11/1/1893- 3/20/1951
Son: George Gere 5/12/1896- 9/6/1963
Son: Raymond Tavers Gere: 2/5/1898- 9/4/1954
Daughter: Florence Cecie : 9/1894
----------------------------------------------
Primary education received in New York. In 1857 his parents moved to Pawnee, Nebraska, where they were early settlers. In 1867 Dr. Gere graduated from the seminary in Pawnee, Nebraska after a 3 year course and studied medicine under Dr A. S Stewart in Pawnee. Graduated after 3 years of medical school at Eclectic Medical Institute in Cincinnati, Ohio in 1871. Practiced with Dr Stewart for 2 years in Tecumseh, Nebraska, later moving to Utah territory in the towns of Ophir and Silver Reef.  He did not like the fluctuations in the mining settlements, and moved to Porterville, California for 4 years and then San Francisco in 1881. For 5 years he was the Chief of Anatomy at California Medical College and later the Chair of Surgery. He served 8 years on the Board of Examiners of the Eclectic Medical Society of California. His specialty was surgery, and particularly correction of facial and physical deformities.

California history: "The Bay of San Francisco: The Metropolis of the Pacific Coast, Volume 2
Editor's note:  FindaGrave.com indicates he married Sarah Josephine Wood, born November 27, 1862 in New York, New York County (Manhattan), New York, USA, died June 17, 1933.  In Table Rock, one of the earliest settlers was John C. Wood (1835-1912) who came to Table Rock as a young man in 1857.  Was Sarah Wood related to John C. Wood?  It is such a common name.  He may have met his wife in any of the other places that he has lived. We don't know but throw it out there in case someone is looking for a connection.  Sharla Sitzman, 3/9/2021.
View My Stats