the reception line
​students thank veterans for their service, one-on-one 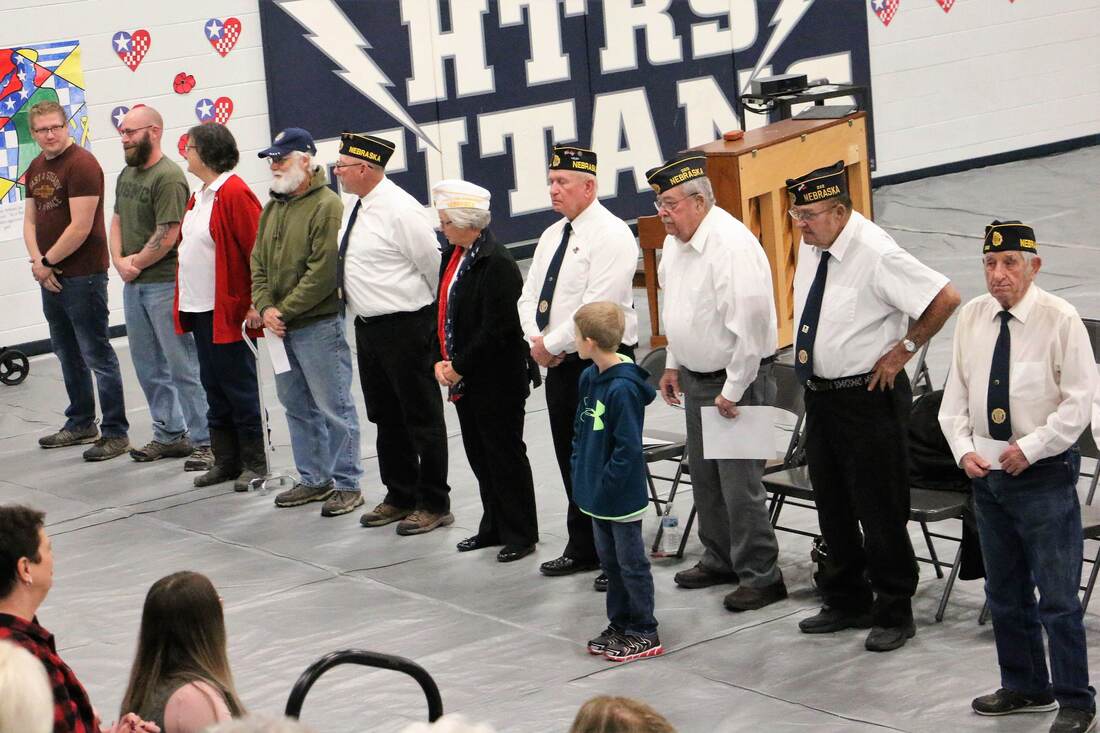 A few of the vets lining up as requested. Photo by Sandy Stalder 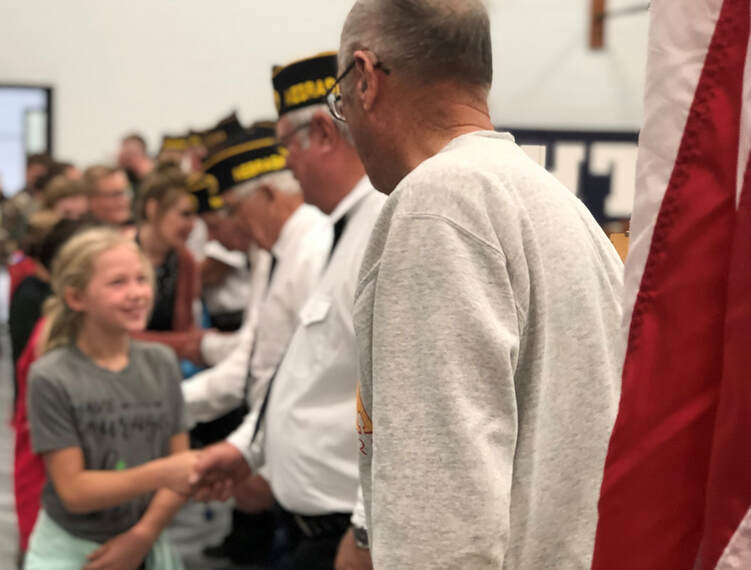 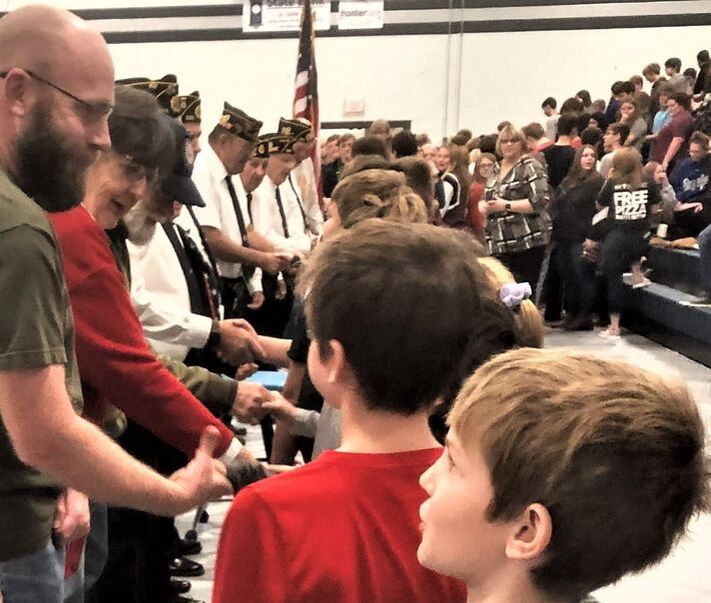 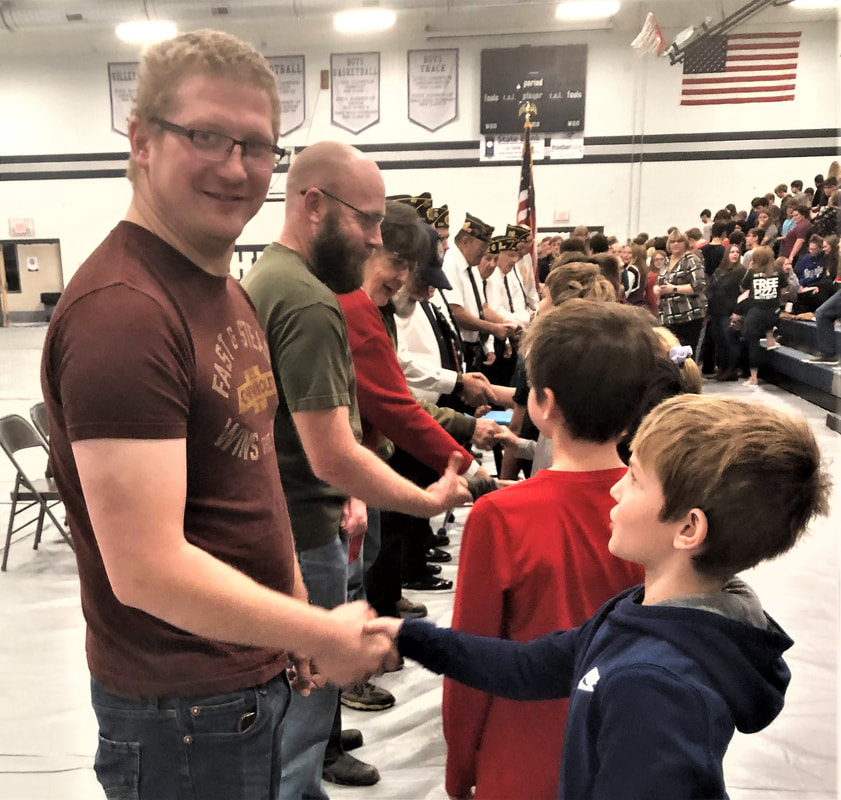 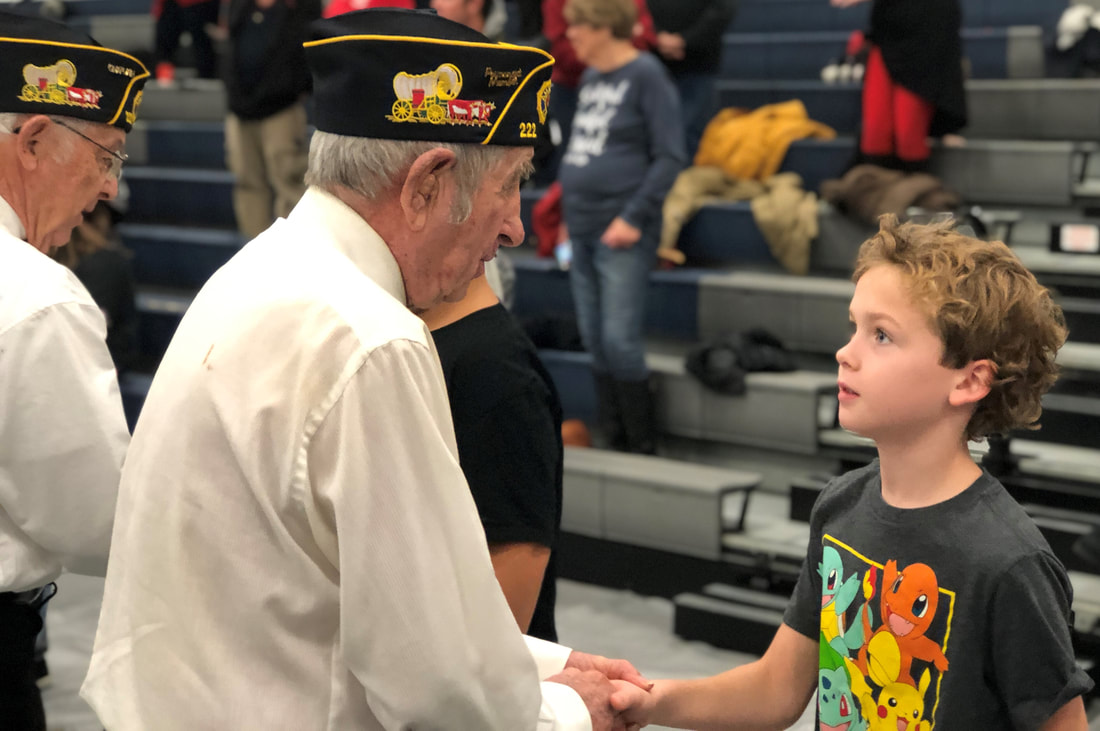 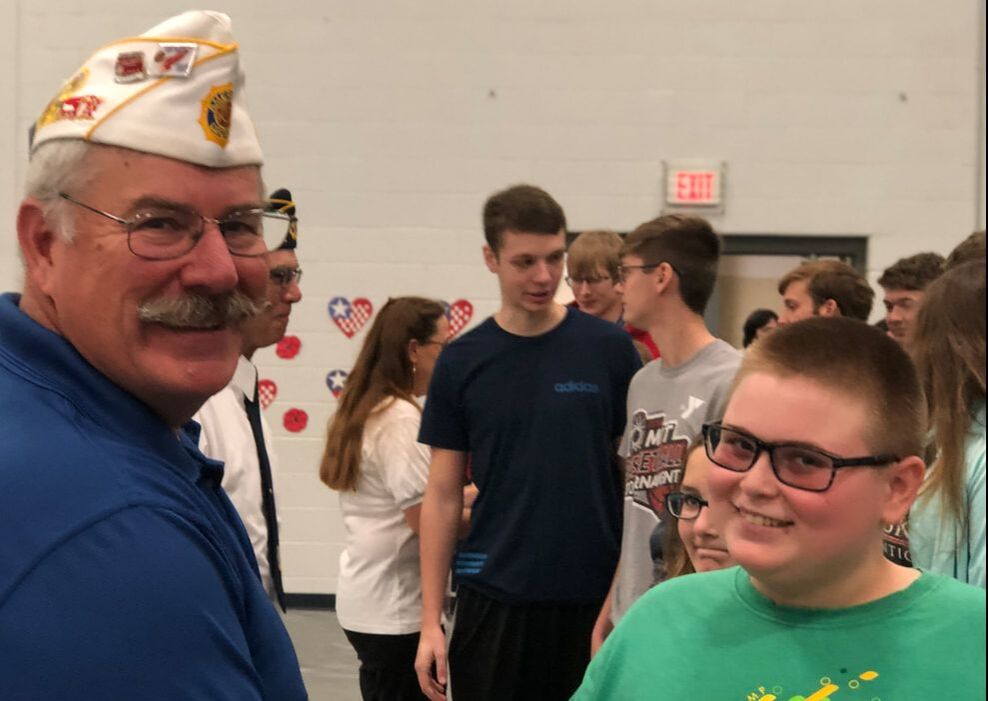 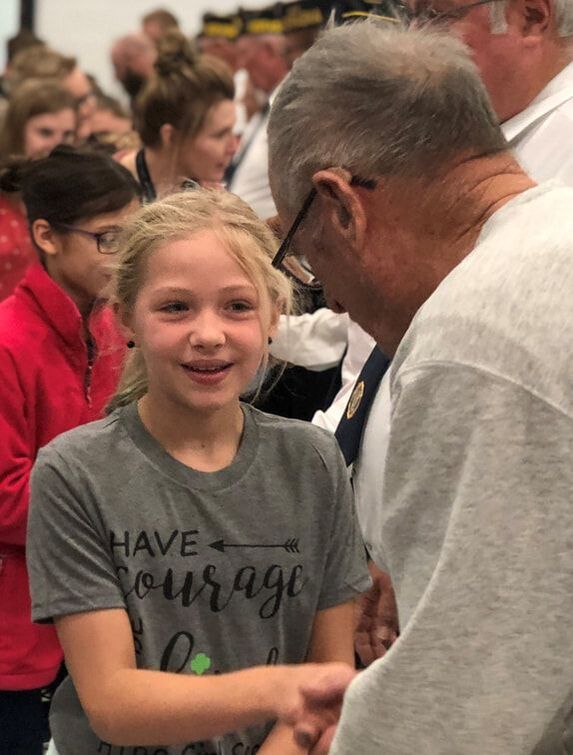 Detail of a photo by Sandy Stalder 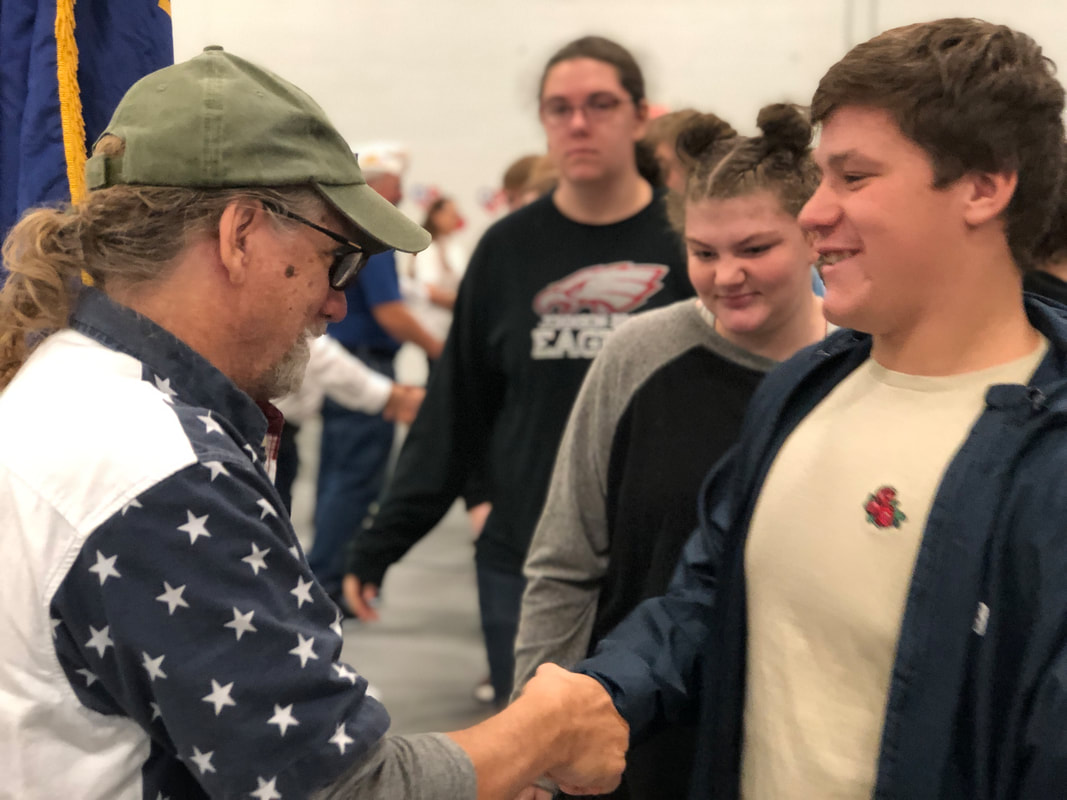 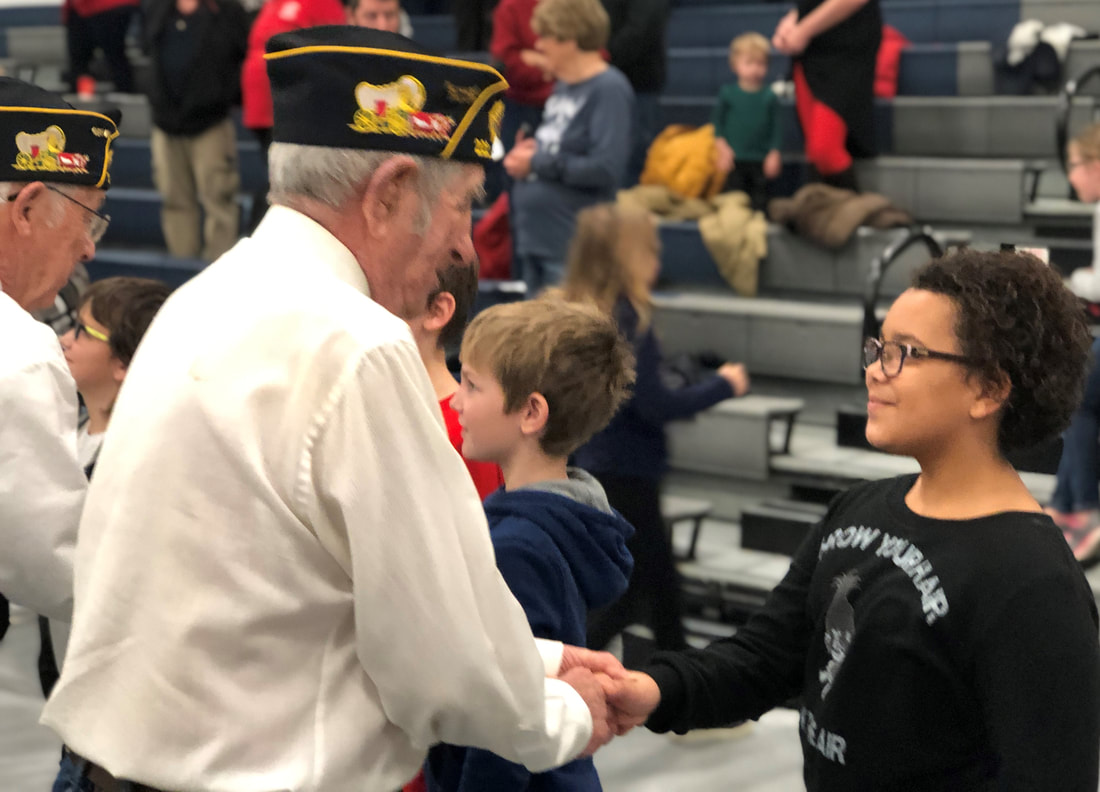 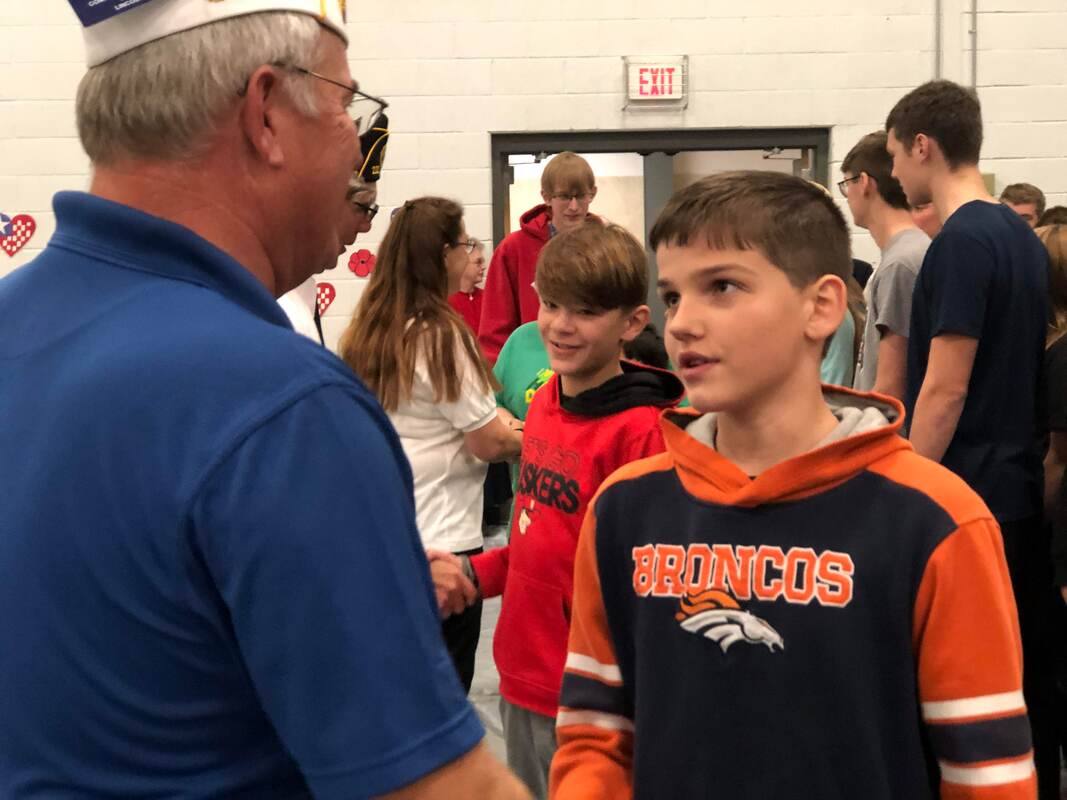 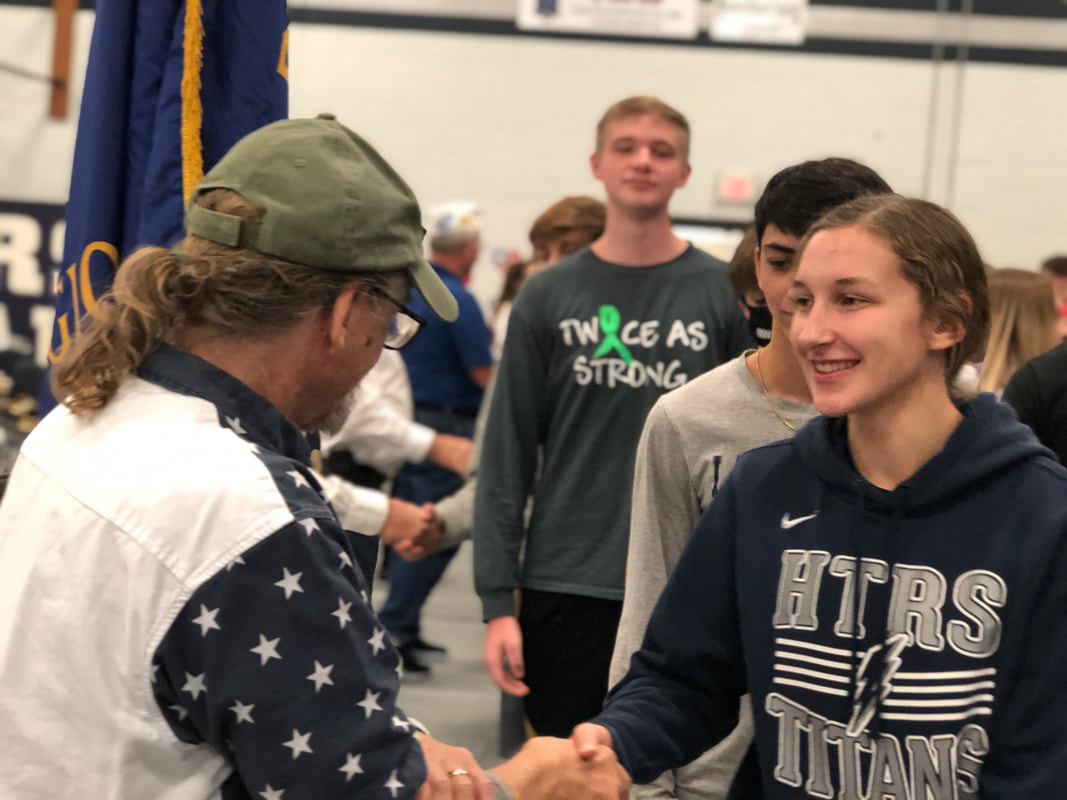 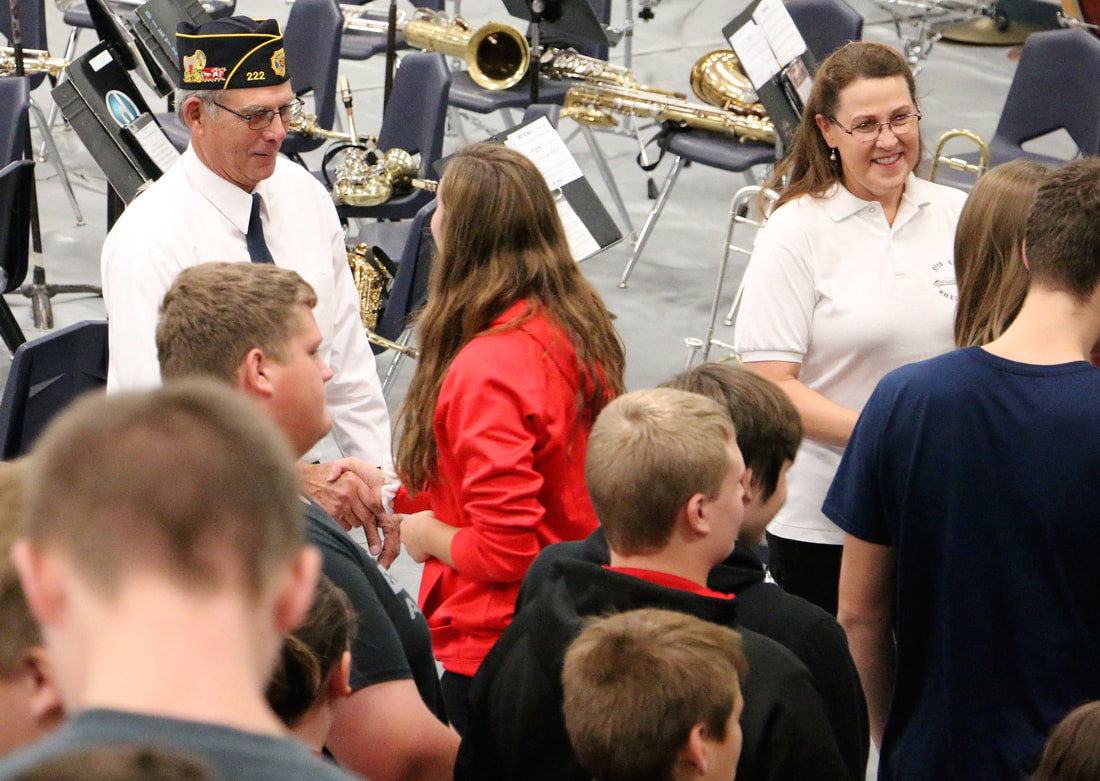 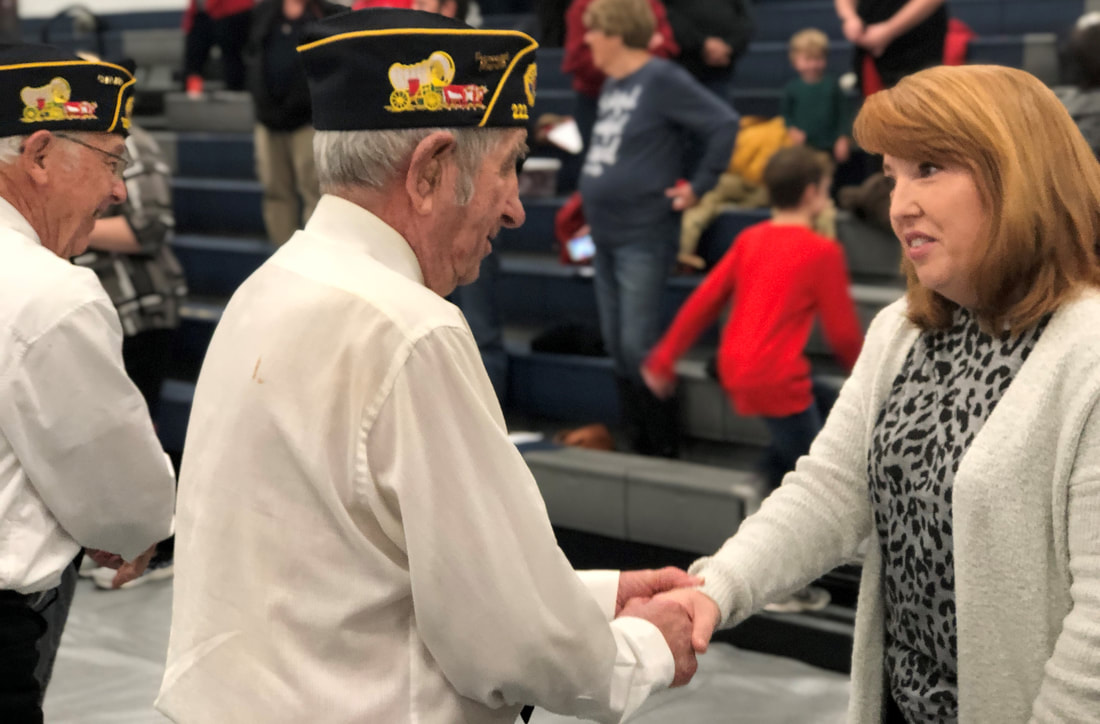 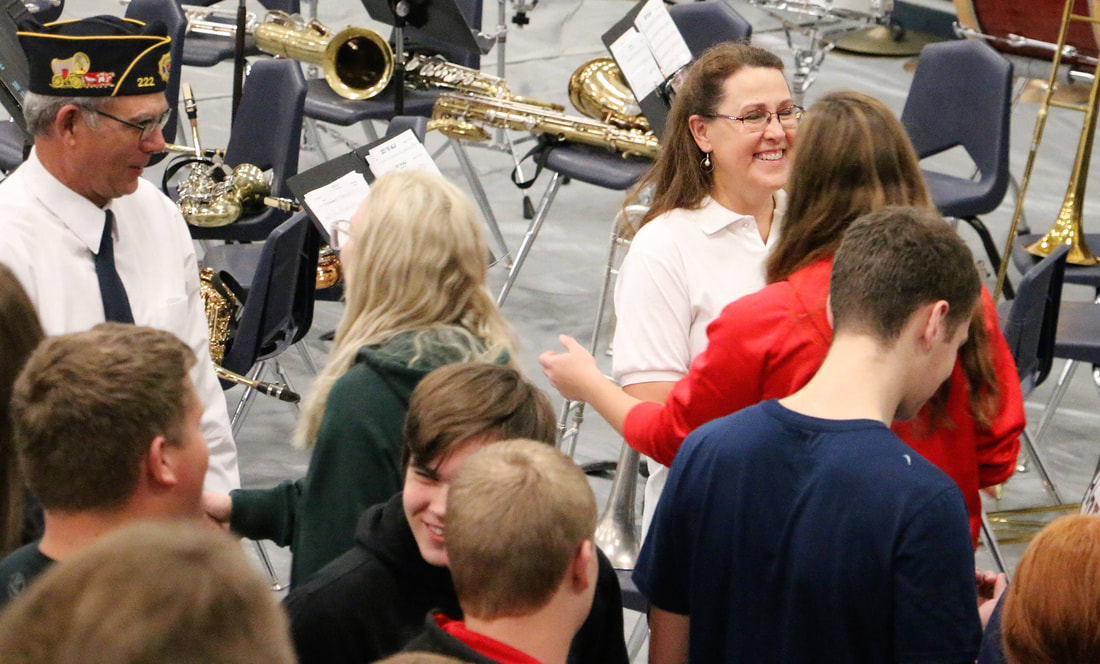 article about the 2019 veterans program 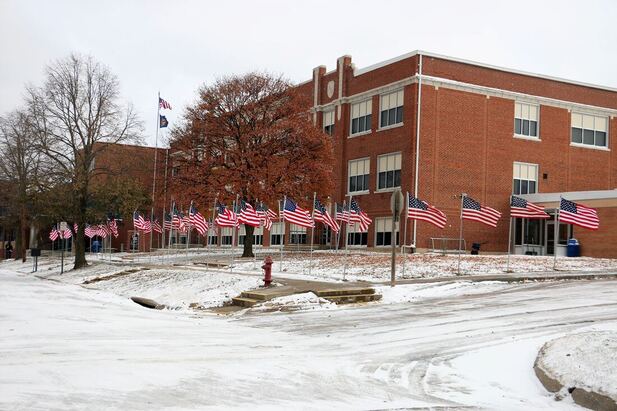 The annual Veterans Day program at the HTRS school touched the hearts of the veterans who came and helped educate the students about the cost of freedom.

The program began when the flag was posted by a color guard of Legionnaires with measured pomp.  Hands to their hearts, some of the smallest students led the Pledge of Allegiance, speaking in slow firm voices, and the HTRS band played the Star Bangled Banner.  There followed band and chorus pieces.

Tanna Brown of the Schubert Legion Auxiliary spoke about the Auxiliary and what it does.   This is the 100th anniversary of the Auxiliary. Bonnie Brewer, U. S. Navy Retired, was the keynote speaker. In between, Sharla Sitzman of the Table Rock Legion Auxiliary presented the annual opportunity for the students to thank the veterans who came to the program.  She introduced some of the veterans, both in the audience and in the Legion members present.  For example, there was George Ketnar, who served U.  S. Army from 1959 to 1961, in the Chemical Corps.  Byford Schmidt, U. S. Navy, 1964-1967, who served aboard the USS Newport News and was stationed in Cuba.  Jim Owings, U.S. Army 1970-1971, who served in so many places in Vietnam that he was asked himself to list some of them.

Students were called forward to show how to thank a veteran.  Look them straight In the eye, extend your hand to shake, and say clearly, “Thank you for your service.”  Then all of the veterans present were asked to line up in front of the bleachers; there were so many that they stood shoulder to shoulder, and there was a standing ovation.  Students were invited to come thank them. They all flowed from the bleachers to shake the hand of some of the men and women of the Armed Forces who helped make America what it is today.

​                After the ceremony, Jim Owings spoke with Tanna Brown of the Schubert Legion Auxiliary, who organizes the program each year.  The reception line was meaningful to him.  “It might seem a simple thing to say those words,” he said, “But you can’t imagine how heart warming it is.”  One could see it in the broad happy smiles of the veterans in the line who had the opportunity to engage with so many young people who shyness may have prevented from coming forward to say what they felt. 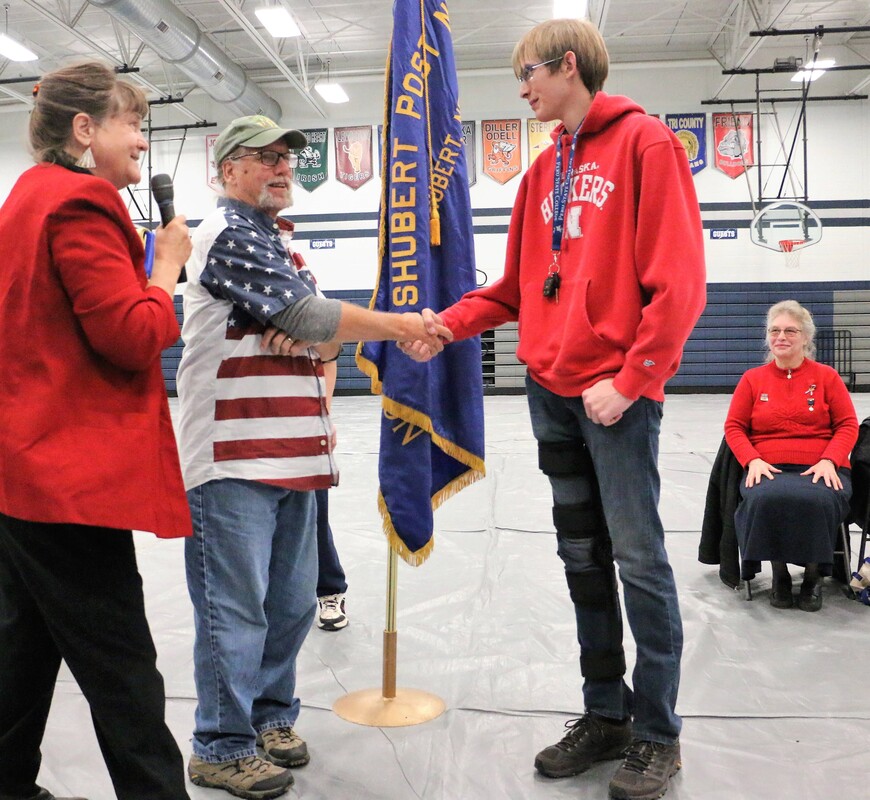 Beginning the part of the program where the students thank the veterans -- a demonstration of how to do it! moderator Sharla Sitzman, veteran Vince Riley, student Trey Blecha, and program organizer Tanna Brown looking on. Photo by Sandy Stalder

About 200 students, teachers, and guests attended a Veterans Day program at HTRS.  It was put on by the Shubert, Humboldt, and Table Rock American Legion and American Legion Auxiliary.

A well-practiced color guard advanced the flag. With sharp, proud steps they marched to the front of the gym to place the colors.  After Tana Brown of the Shubert Auxiliary unit welcomed those present, the HTRS choir and band provided music.  The choir sang beautifully to render the famous World War I poem about the poppies of Flanders fields.  The band played well, as usual. Two of the Legionnaires explained symbolism of the MIA table, including not only the missing chair, but also the table cloth, red rose, candle, and so on.

Sharla Sitzman of the Table Rock Auxiliary unit talked of all the veterans of all the wars, veterans who have paid the cost of today’s freedom, veterans who have died and can no longer be thanked.  She then brought the veterans present, from both the Legion ranks and the audience,  to stand across the length of the gym bleachers.  There were about 20 of them.  All of the students, teachers, and visitors, filed down to shake their hands and thank them for their service.  From small children from the grades filed past, each solemnly thanking each veteran.  At the close, as the veterans turned to resume their seats, all in the gym leapt to their feet and spontaneously broke into thunderous, raucous applause that did not die down until the last veteran sat down.

Speaker Lt. Mark Novak closed the program. He is a graduate of the Naval Academy and spent 27 years as a Navy flyer, logging in 328 hours of combat flying time.  He reminded the assembly that this year marks the 100th anniversary of Armistice Day, the end of World War I, to which the United States sent 4.7 million men.  Over 116,000 of them died within the 18 months that America was in the war, which had been going over three years when we entered.

Lt. Novak cited statistics about other wars. In the 245 years since the Revolutionary War, there have been 57 million veterans.  The number of veterans of courses decreases with time. There are no living World War I veterans; the last died in 2011.  Only 350,000 World War II vets (about 2% of them) are alive.  Less than 40% of the Korea vets are alive.  About 85% of the Vietnam veterans are alive.  Today, there are a total of about 20 million veterans alive, and about 2 million men and women are presently serving this country, which is about 1% of the population.

Lt. Novak concluded by answering the question, “What can you do for veterans?” Two things, especially, he said.  You can thank them for their service.  And you can ask them for their story, how and where and when they served.

​Veterans gathered in small groups as the Auxiliary handed out poppies to the departing students.  They discussed the program. One said, “We didn’t have a program like this when we were in school.”  They appreciated the chance to remind young people about this part of our history. They were struck by the attention rendered throughout the hour-long program and by the sincerity of the thanks they had received this day.  They were glad to be there.

The middle school has since been closed.  All students now attend at the campus in Humboldt. 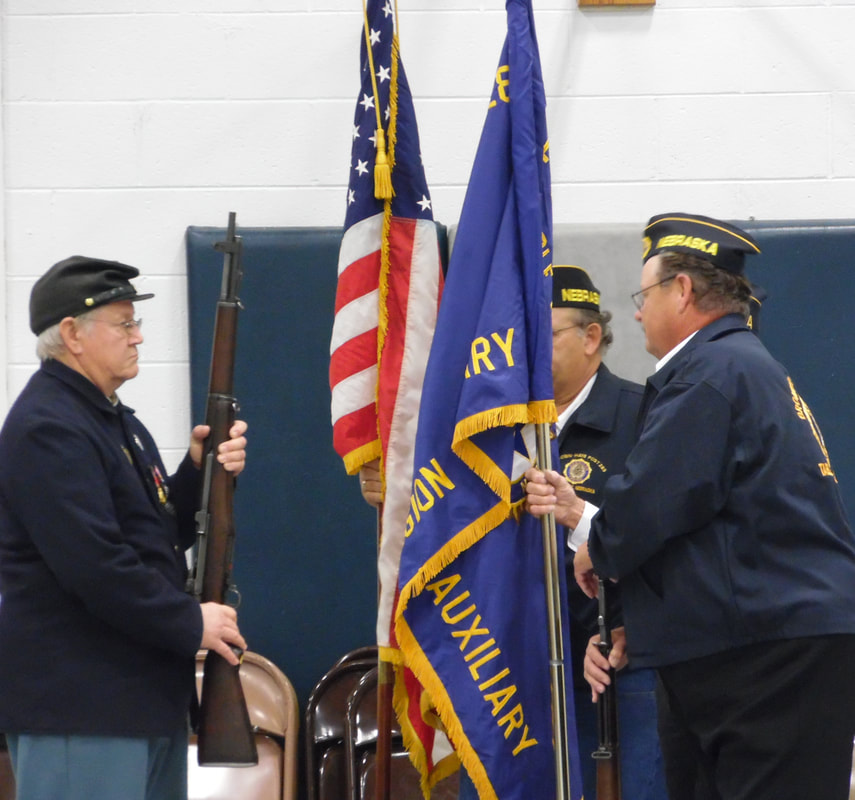 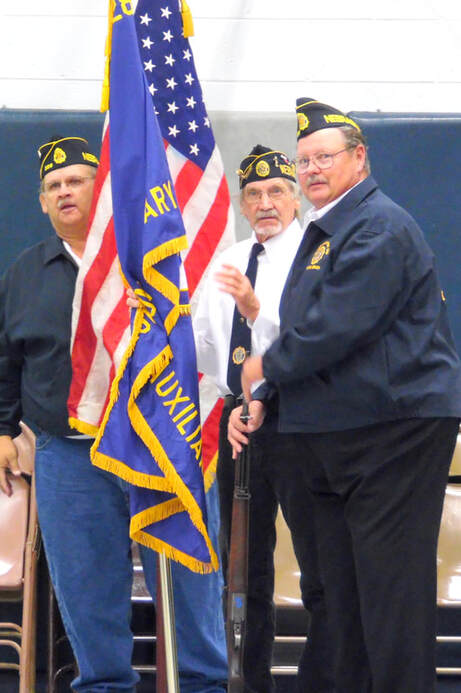 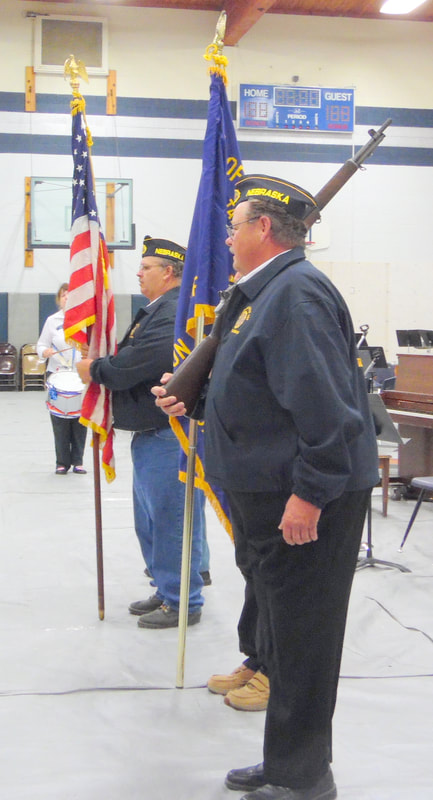 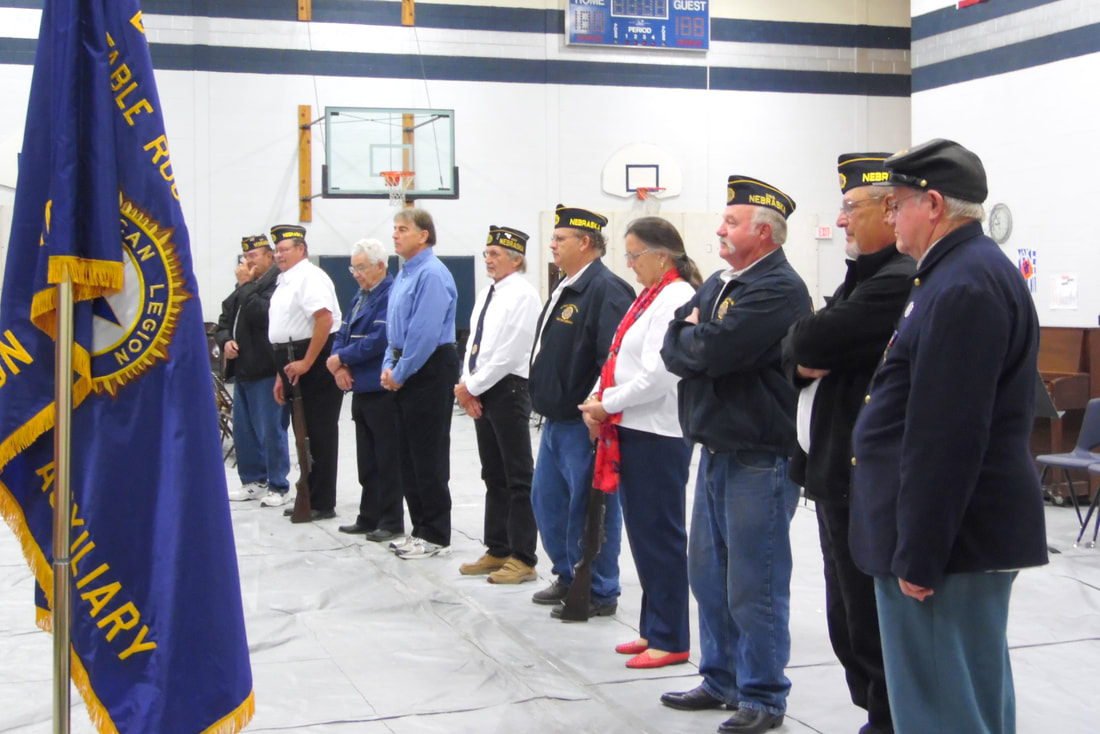 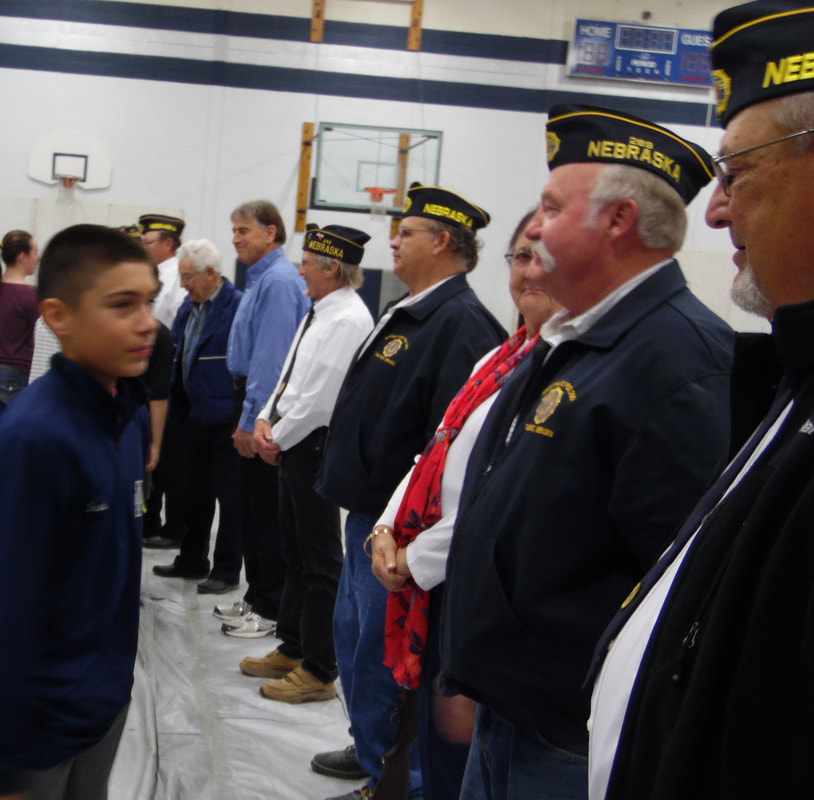 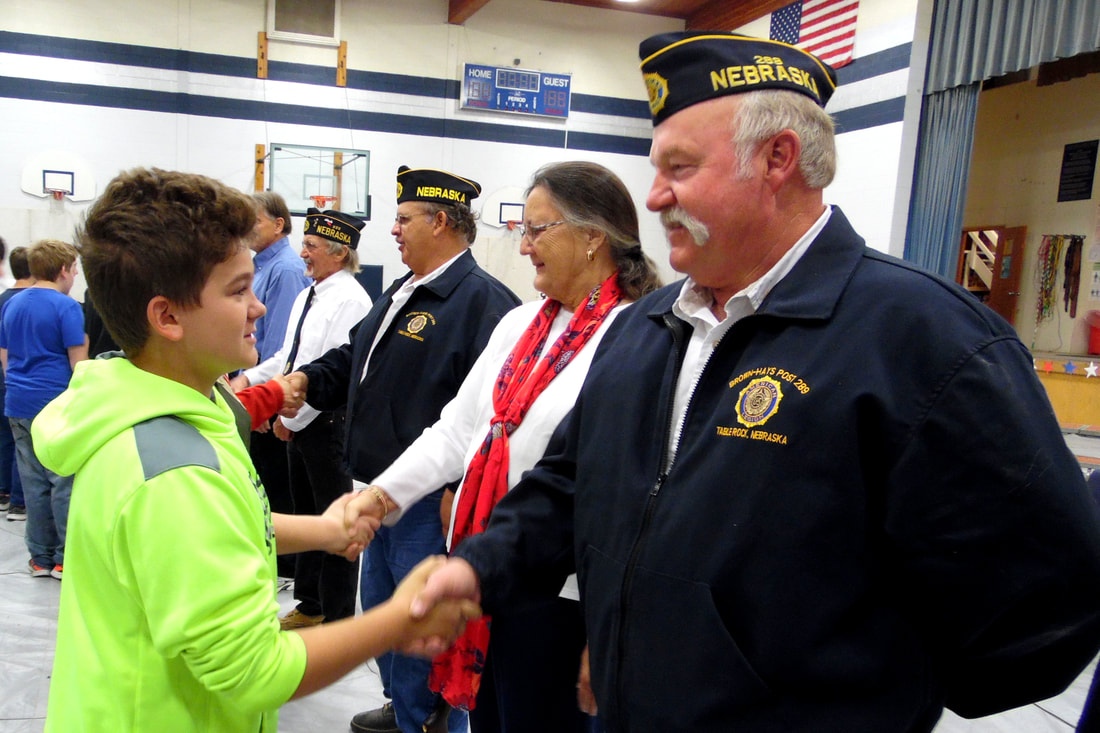 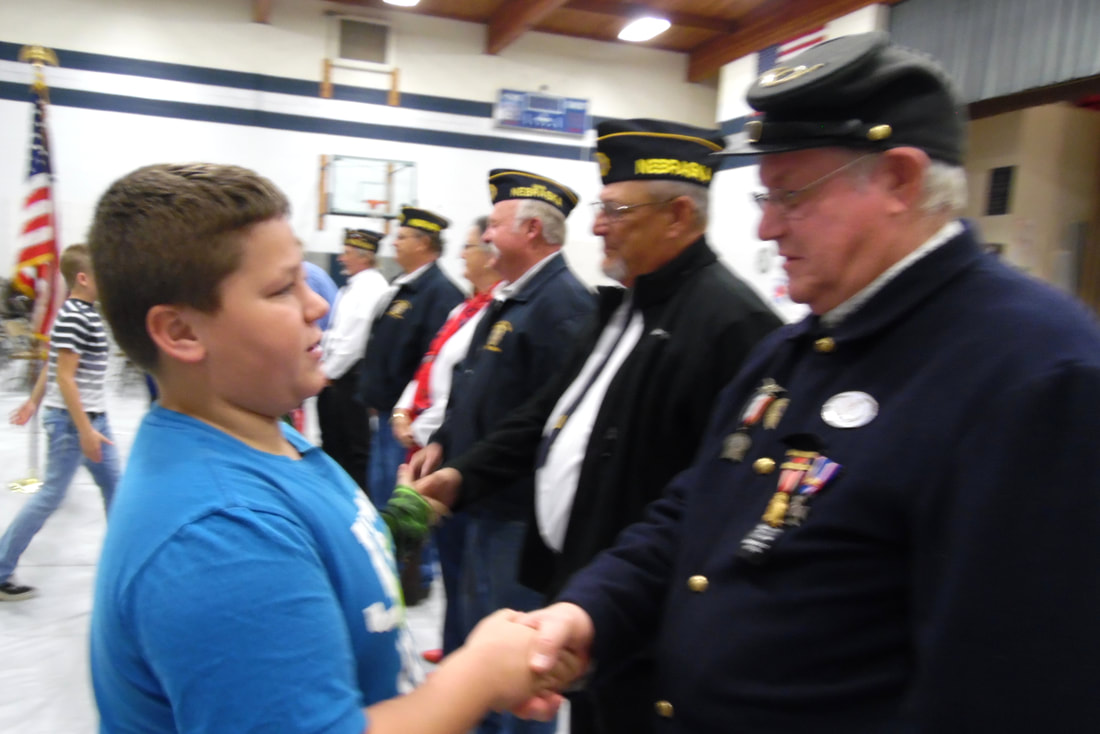 Aiden Worthy with Bill Dean, Sons of Union Veterans of the Civil War 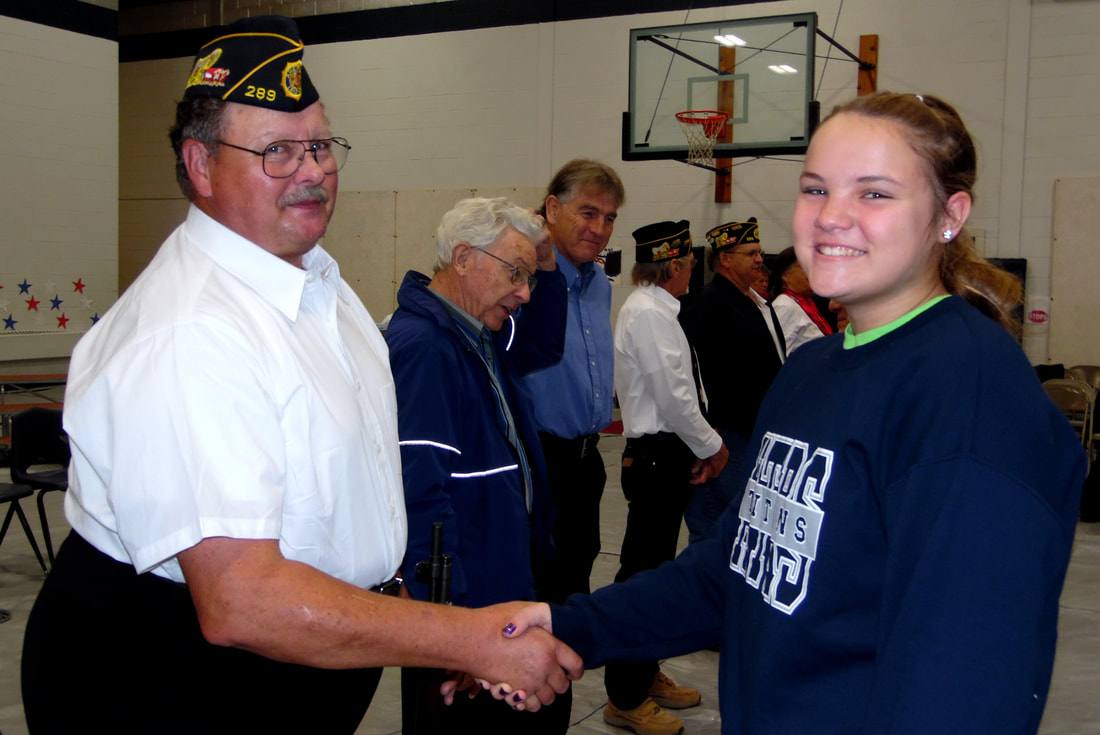 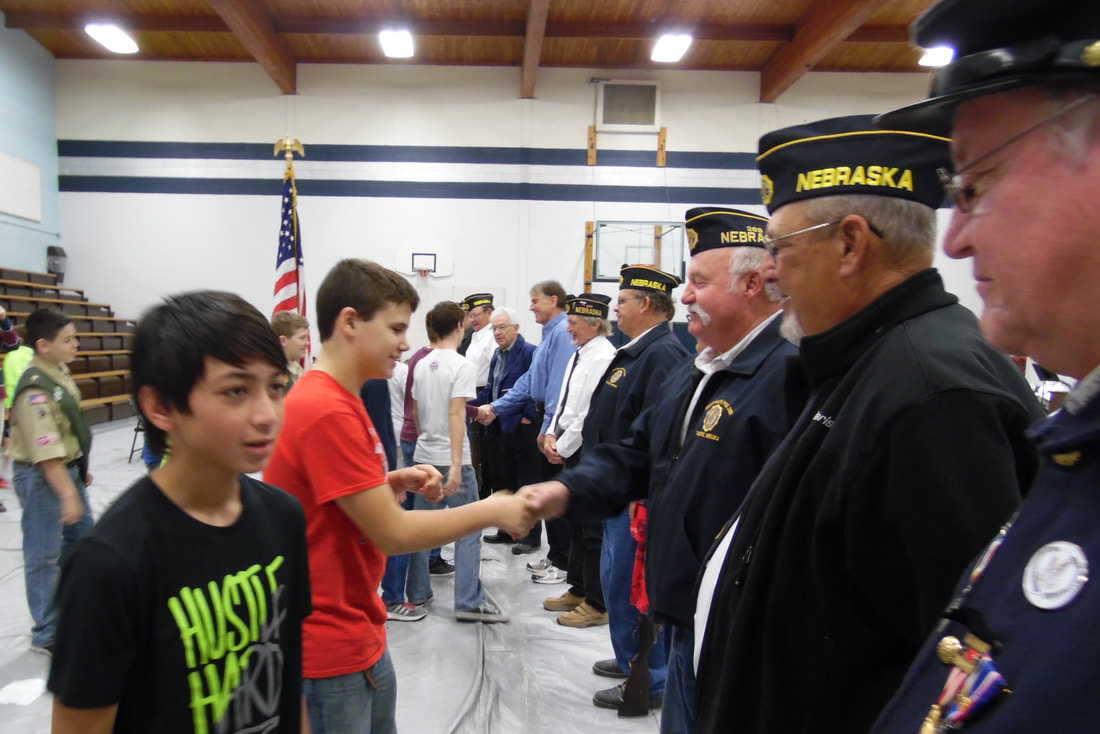 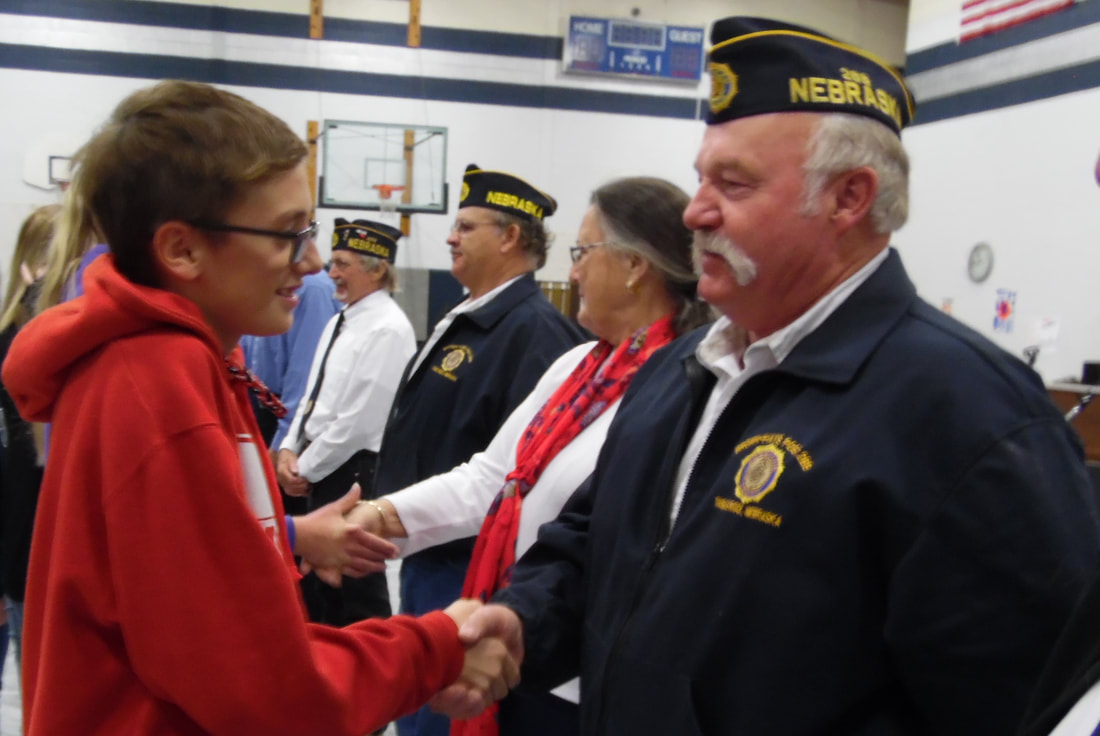 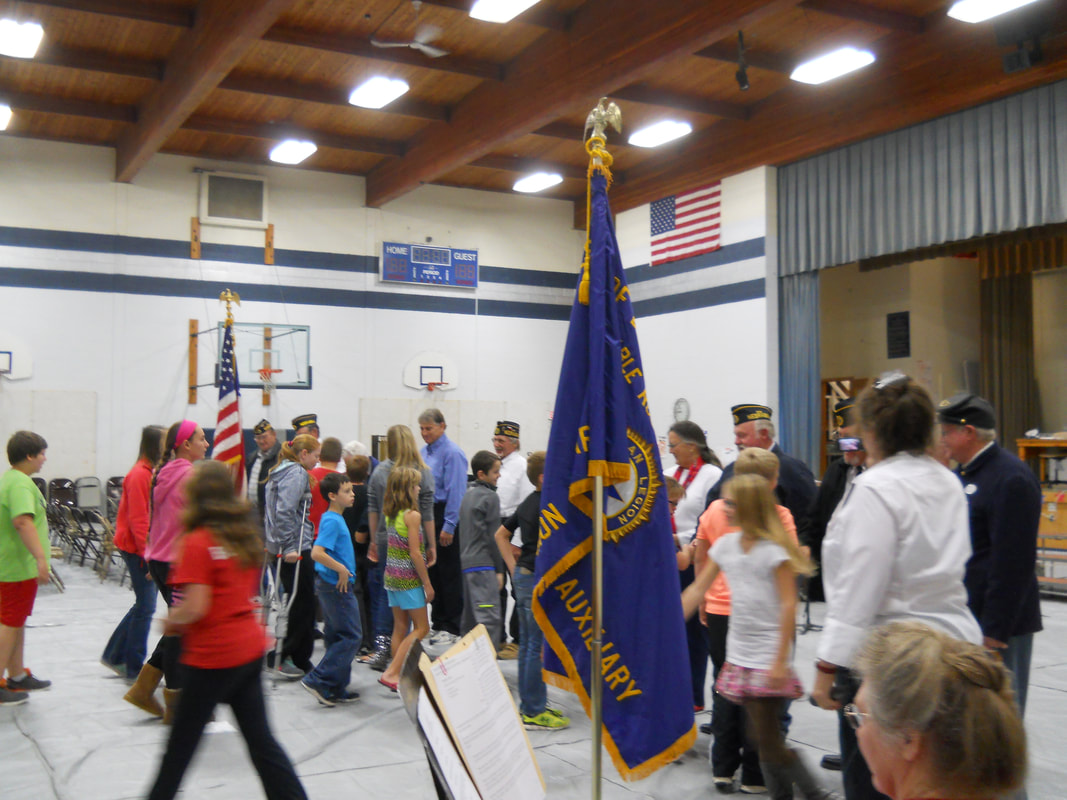