editor's choice
of the
​photo collection of terry hunt korell

Terry is a descendant of several old families of Table Rock, including names like Purcell and Muscheites.  Many of her photos belonged to her grandmother, who wrote names, annotated them, and on occasion even added a family story.  There are pictures of family memories and occasionally of friends and neighbors.. 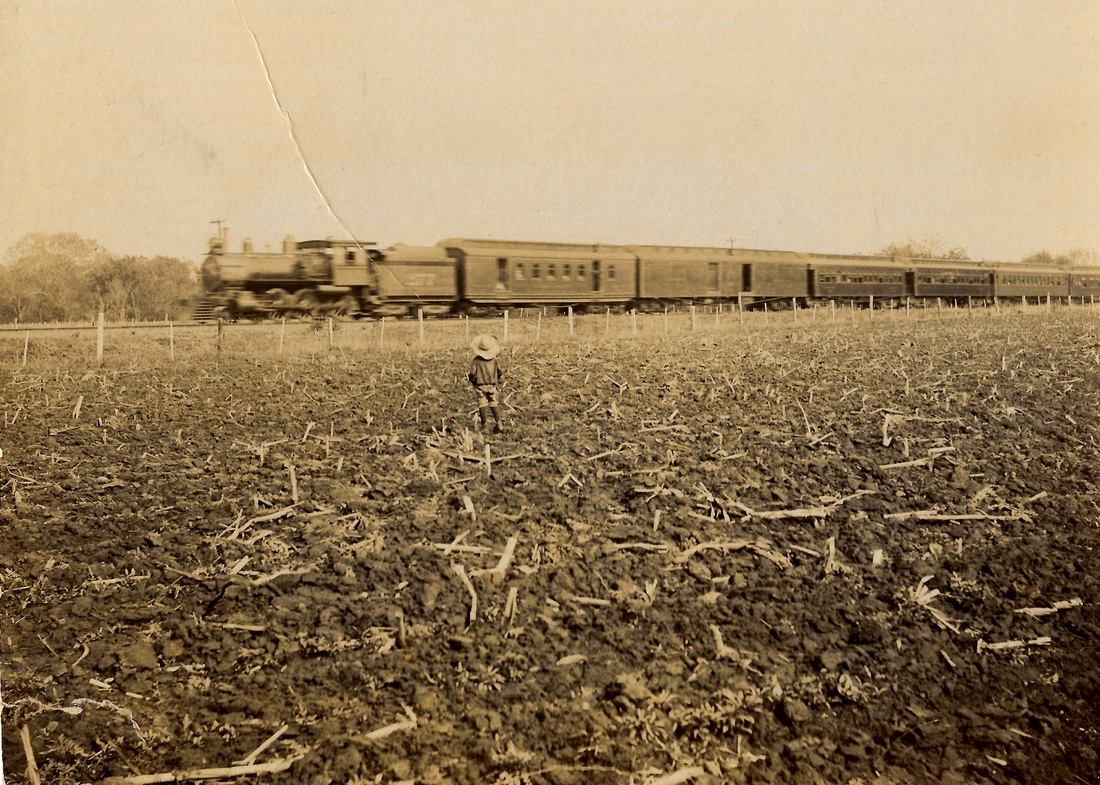 Truly a wonderful picture -- they say there are not very many pictures of steam engines in motion but this one certainly is, and the story behind makes it even more special. This is Emory Miller, an orphan from the "orphan train" program, which brought orphans from the streets of New York City to the farms. Some were treated well, others were used as little more than slave labor. Emory was treated as one of the family, but did not like rural life. Here he is at about age 8, watching a passing train. The north-south line that ran through Table Rock went past the family farm north of Table Rock. Photo 1813.

A story about the orphan taken in by Jack and Ida Purcell:

The little boy’s name was  Emory [Miller] and as Uncle Jack found out, he was ornery. Jack was too soft-hearted to punish him.

During one of his tantrums, he threatened to kill himself.  Grandpa Jimmy (James H. Purcell) said, “So you want to kill yourself.”

Emory answered with an emphatic “Yes.”

“So how did you figure to do that?”

Again with feeling: “I’m going to hang myself.” “Well then, let me help you.”

Grandpa went out and found a rope, tied a noose in it, and placed it over Emory’s head.  Grandpa had palsy, which caused his hands to shake, and as he shook the noose got tighter and tighter until Emory actually feared for his life and admitted he wasn’t real sure he wanted to die after all.

In the end, Uncle Jack despaired of ever being able to tame Emory.  He was sent back to New York City where he eventually became a policeman. He kept in touch with the family all throughout his life.

uncle george of the twinkling eyes 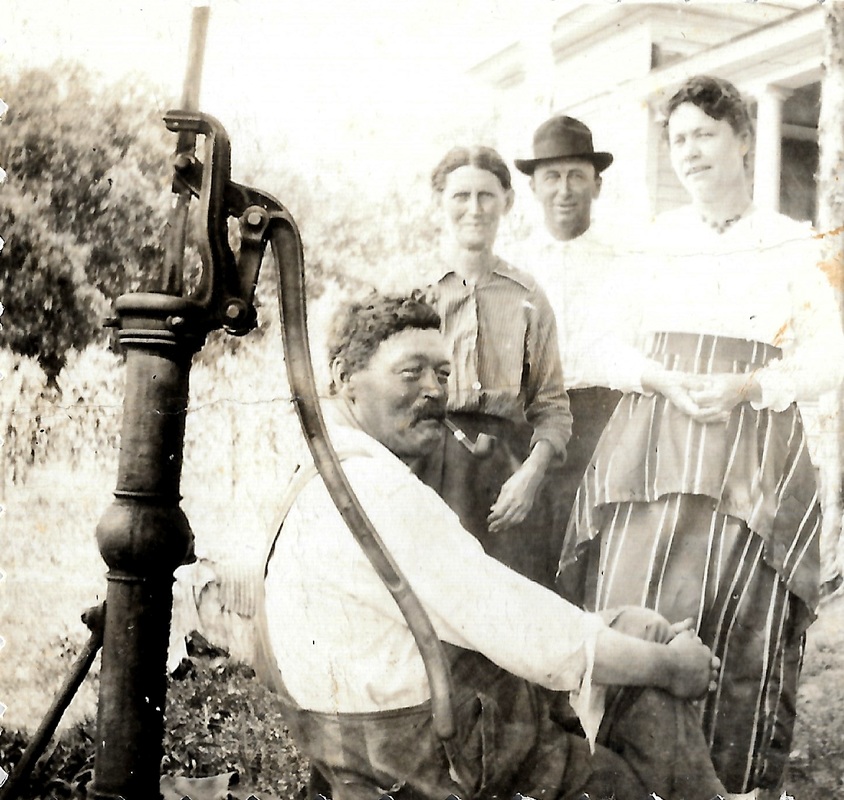 grandma margaret hunt's story with the picture of her uncle george

Uncle George was a real kick – quite a character! He had twinklng blue eyes which sparkled with mischief and – when I knew him – snow white curly hair and mustache.

Never without his pipe.

In his youth, he loved to fight and play practical jopkes. He got in a fight with a man about a presidential election. (George was a Republican) and his opponent bit his little finger off!  Uncle George won the fight in spite of it all and nearly killed the man.

He fell in love with a girl but she married another – so George never married!

seeing off uncle jake at the train station 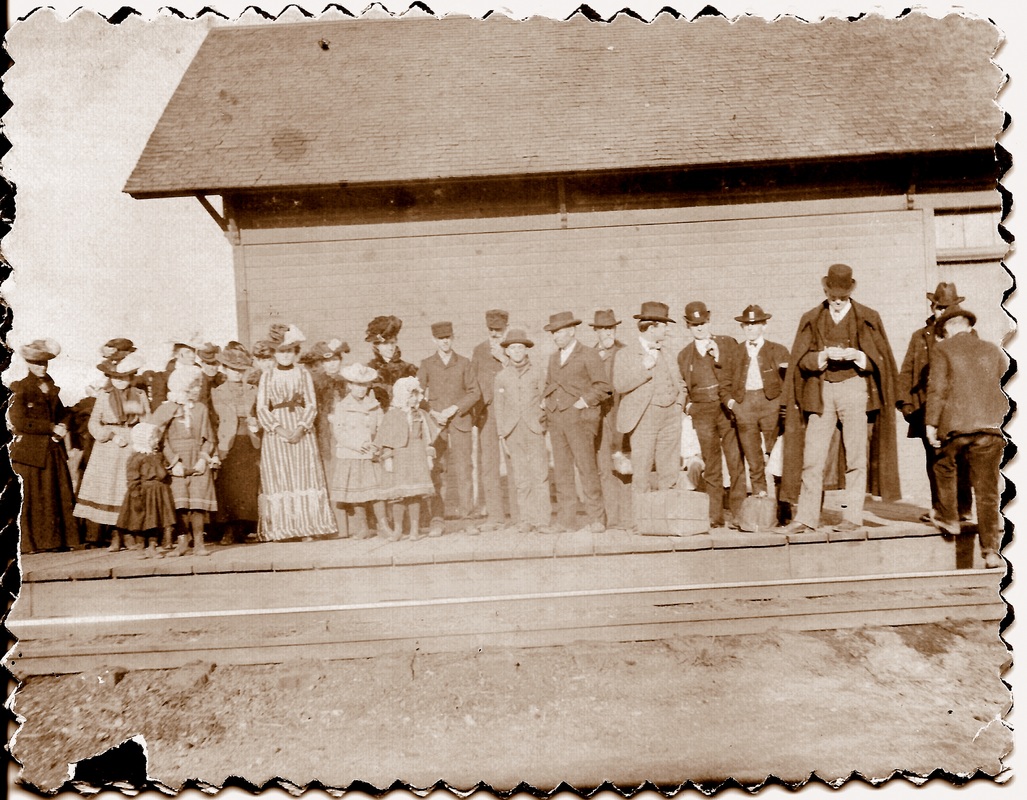 Photo 1825.
This is a rare picture of people waiting for a train in Table Rock.  We have so few.

Grandma Margaret Hunt says there are "so many" she doesn't recognize, but spots quite a number. They include not only Purcell family but also some friends -- Matilda Werner and Bertha Hays. 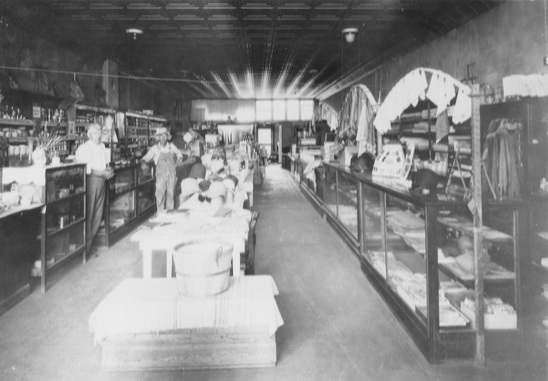 Photo 1812.
Jack Purcell's father was an early merchant in Table Rock. The original Purcell store was on the south side of the square and was wiped out in the 1920 fire.   Uncle Jack built this one back.  It was in the middle of the block, and was later used for businesses such as Knapp's IGA and Vrtiska Electric.

​Grandma Margaret Hunt had some things to say about this picture:

This is Uncle Jack’s store in Table Rock, Nebraska. T

his store was built in 1920 to replace the hardware store which burned on the same site.  The fire burned most of the block including a bank, hotel, great grandpa’s hardware store, Fellers’ merchantil, a drugstore, etc.

Uncle Jack is the man on the left, other man unknown.

The left side of the store was Uncle Jack’s, the right side was Aunt Idie’s.  My grandmother, Della McCoy, was a kid and was here sometimes, too.

Uncle Jack was not a very good businessman, being too concerned about the customer getting all that was coming to him.  To make sure they did, he always gave them one or two extra pickles or extra measures of this or that!

This building is still standing,thought it is now empty and in rather deplorable condition.  We saw it this summer.

In this same block and burned in the fire also stood a restaurant owned by Uncle Mylum, Jack’s brother.  My mother worked there when she was a youngster.

Uncle Jack’s store would be called I suppose a general store since he sold groceries and about everything else from the look of it. The hardware store which stood on this site before the fire belonged to my great grandfather James Purcell .

I was in this store many times when a small child and used to run and play up and down the aisles.  This picture was probably taken when the store was quite new. 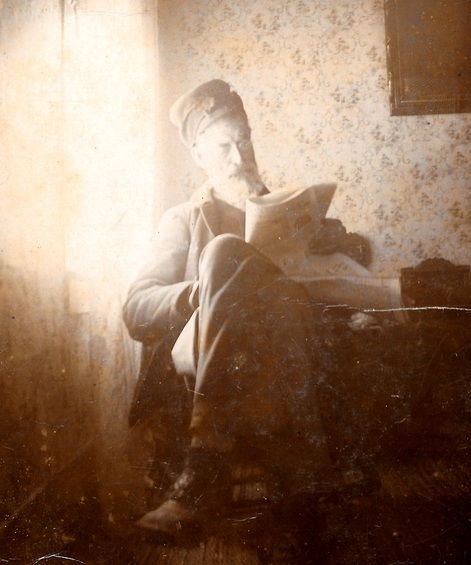 This is Great Grandpa James H. Purcell, an earlier settler of Table Rock who came here before the CivilWar.  This is another rare type of photo.  Few Table Rock photos taken inside someone's home exist from this time period.  Photo 1819. 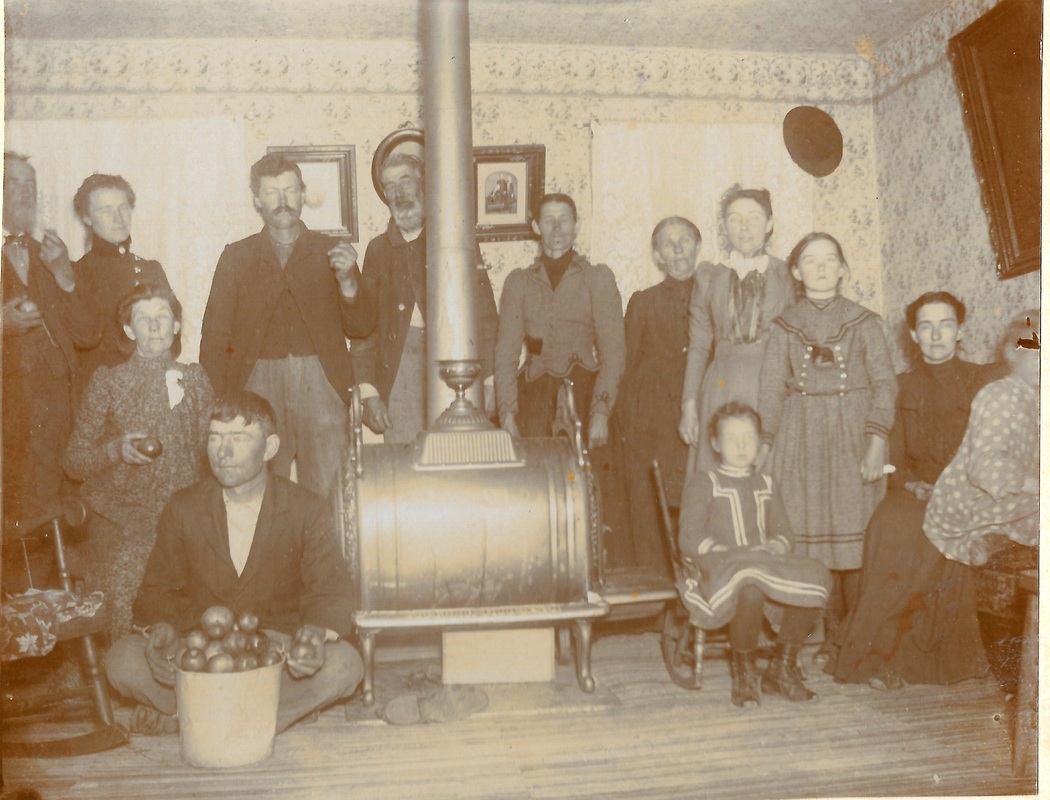 They are especially neat because friends are included, so that many families may see their ancestors.  For example, the one below has the only known image of Lizzy Freeman, back row, second from the left.  Photo 1824 above, Photo 1823 below.

Grandma Margaret Hunt gives names of the people above and says a bit more:

The apples were gotten out of the hole where they were buried up in the orchard and the hole stuffed with straw. We’d have to pull out the straw to get the apples out and were they ever cold.  Some would be covered with frost but were ripe and crispy. 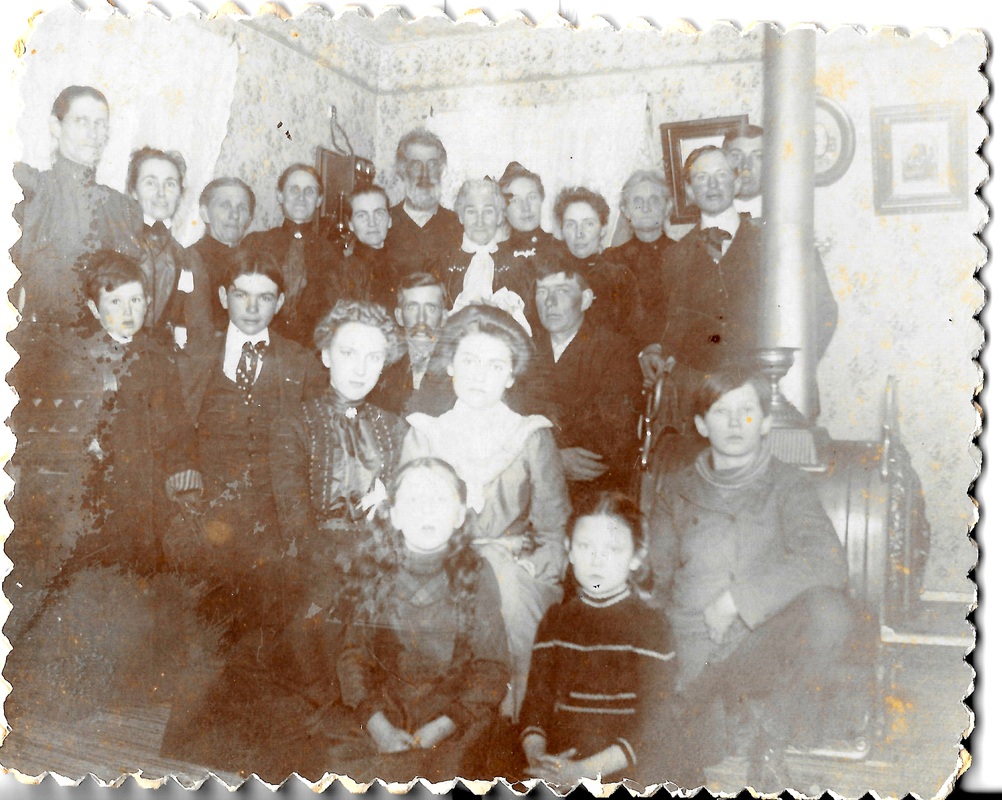 ​There were many family and friend get togethers in those days.

posing in front of their home 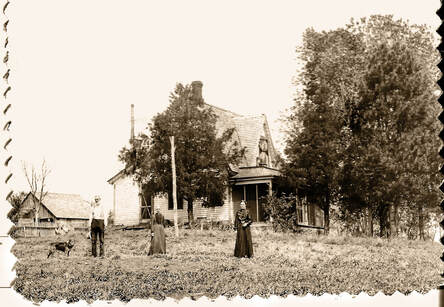 Photo 1816, retouched by Kristin Quevedo
A convention in the early 1900s was for families to pose with their homes in the background.  Their entire home and often part of the farm as well.  Here are Grandma & Grandpa Purcell & their daughter Della Purcell.  Photo 1816.  Grandma Hunt says:

In front of the original farm house at Table Rock that burned. 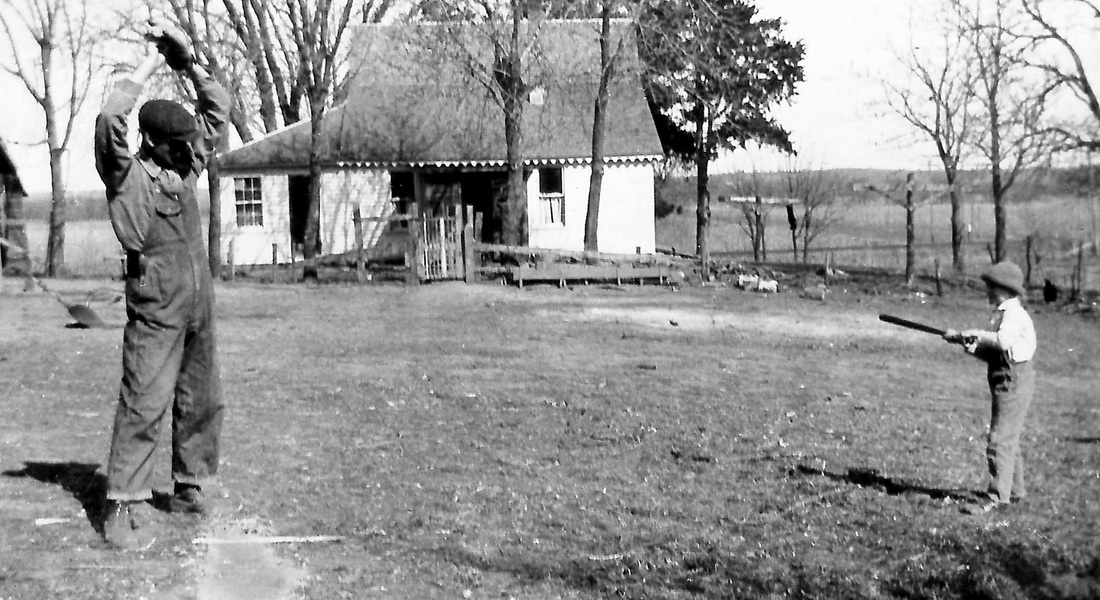 Again, people doing ordinary things.  These are special.  Fred Muscheites, Sr., and Jr., at the Purcell farm.  About when was this picture taken? Fred, Sr., was born in 1891 and married Ruth McCoy, Margaret Hunt's niece. Photo 1861. 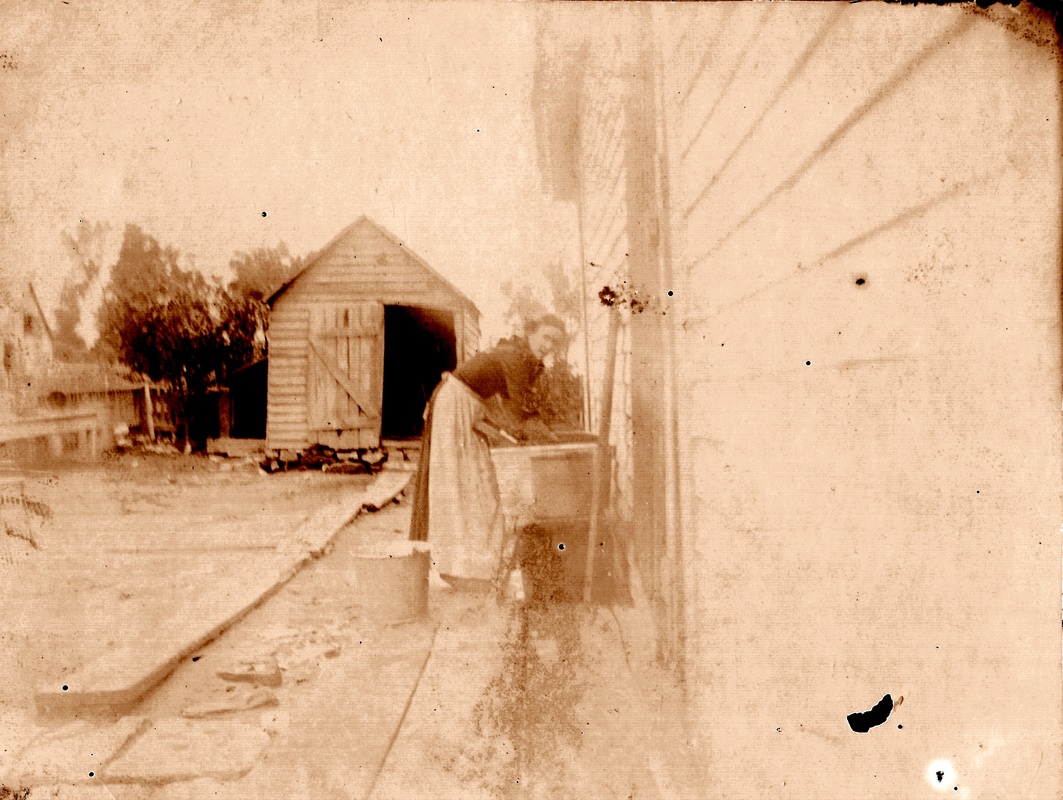 Always prized are photos of people doing everyday things.  This is a photo of Della Purcell McCoy doing laundry.  It's hard to make out - the original is extremely faded.  It appears that she has a wash tub on a stand and is using a washboard. The structure behind her looks like a board sidewalk up to a shed.  Photo 1817.

Below is Della with her daughters Ruth and Stella, Photo 1837.  The girls are wearing small corsages, stems up as was the convention. What was the 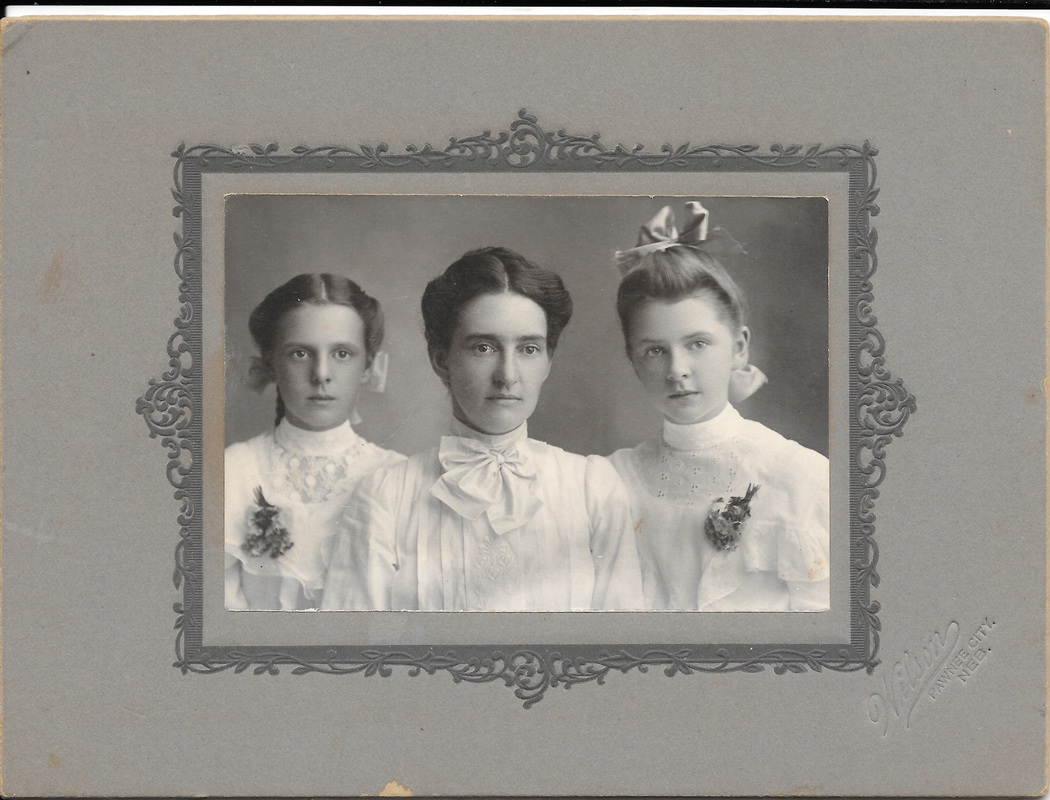 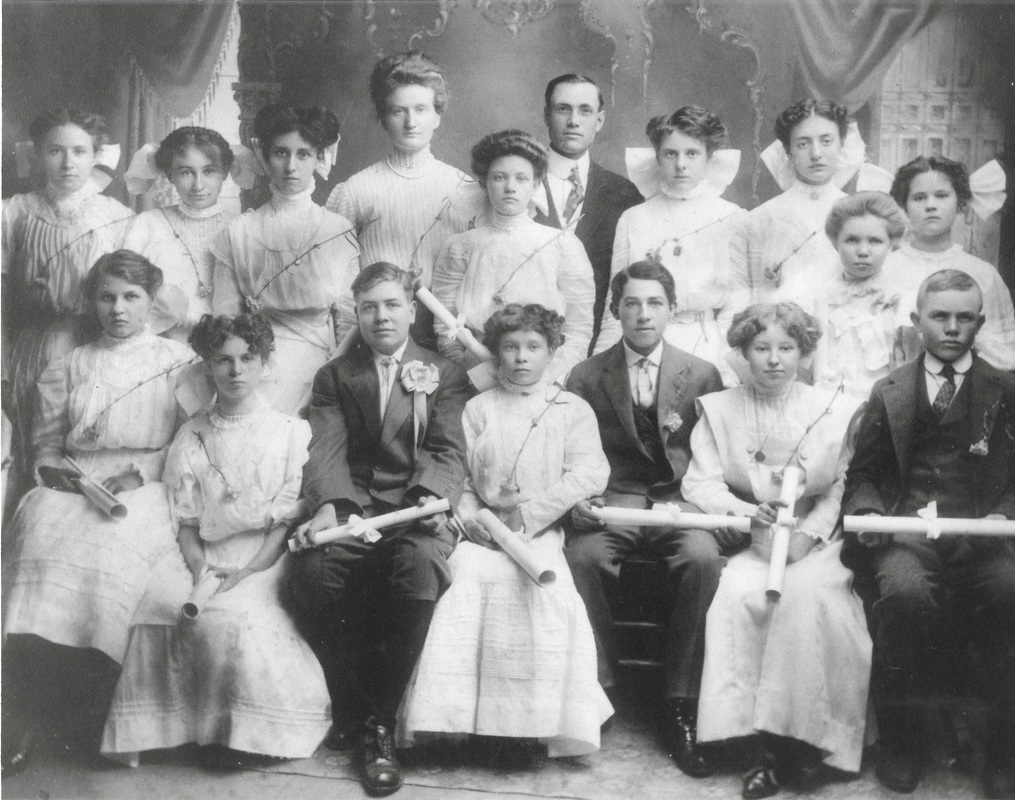 In an age when not everyone got to go to high school, 8th grade graduation was a big deal, as you can tell from this photograph.

This photo may be mislabeled. The 8th grade class in 1908 would be the students who would graduate from high school in 1912. According to the Table Rock - Steinauer Alumni Association, there were only 5 graduates in 1912: Leila (Fellers) Zoak, Lena Smythe Wood, Dr. John Woods, and Lottie Woods Andrew.

The previous year's class was about the same size, but the Class of 1913 had 13 graduates, including 2 boys. There are 15 here, including 3 boys.  The graduates include good family friend Tillie Strejc, which might explain why the photo is in the family collection when it seems no Purcells were in it.

Below are the exquisitely ovely Strejc girls, Julie & Tillie. Photo 1834. Tillie might be the girl to the farthest right in the photo above. 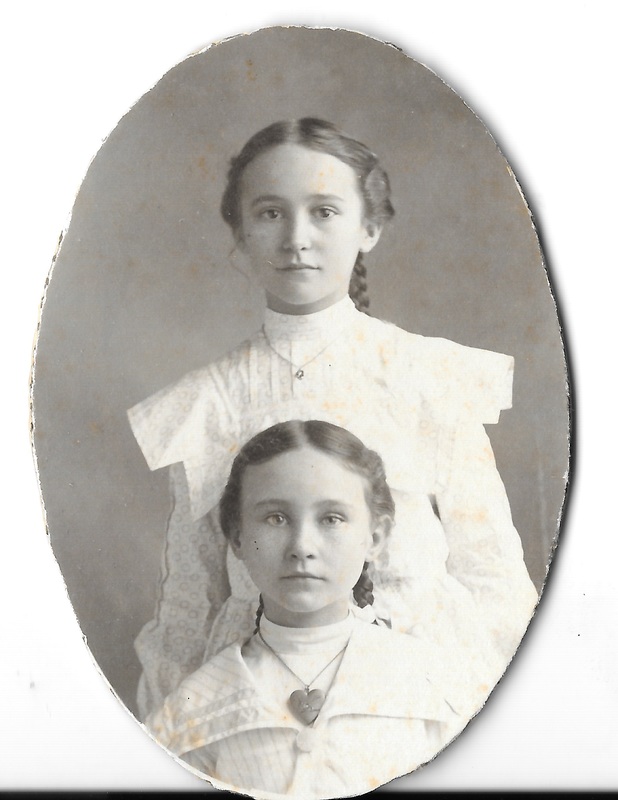 Rode to school with them from the country.

They were [Aunt] Ruth McCoy’s friends.

They were artistic. They always had the first Johnny Jumpups and walked through the timber to get to school and drew pictures in colored chalk of the pasture, etc., on the black board. 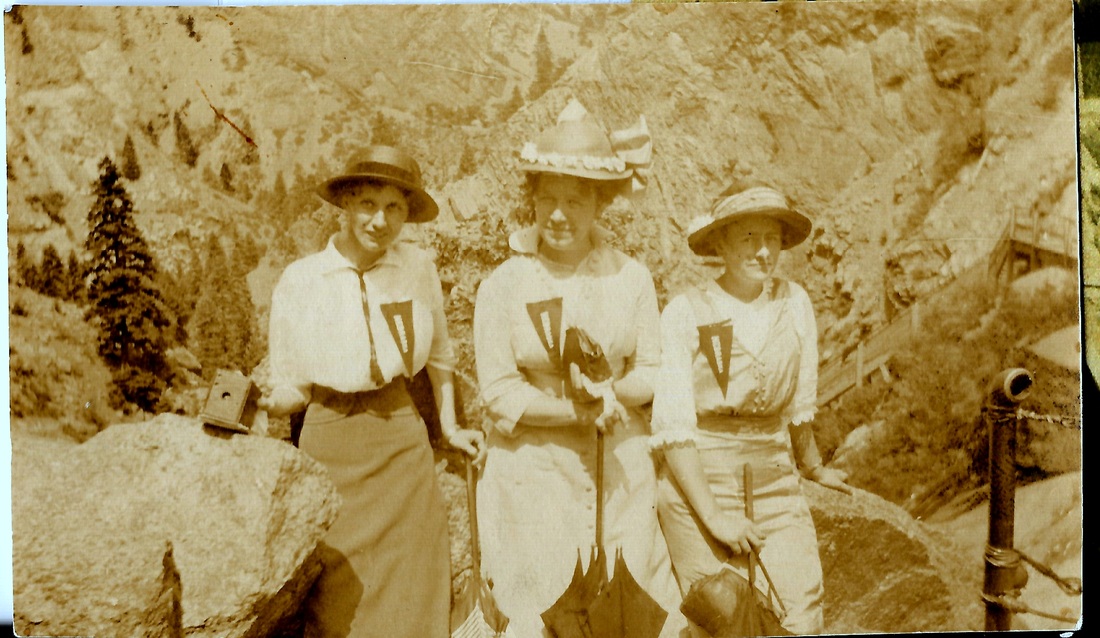 Now who has a vintage photo of a teacher on vacation?! Here are three -- Nelle Irwin, Maggie Engberry, and someone else.  Maggie eventually married a Purcell. Where were they?  Colorado, the Black Hills?  I don't know, but they are on vacation, ad they have hats and parasols!  Photo 1828.
View My Stats