a baby delivered by dr. mccrea in 1915 - beulah kreifel myers

a baby delivered by dr. mccrea in 1926 - floyd vrtiska

On Memorial Day Weekend 2017,  bothers Edward Lee and McCrea Miller visited Table Rock, along with their mother and Edward's family.  The brothers are the great-great grandchildren of Dr. McCrea.  Edward is named after Dr. McCrea, who was born with a middle name he hated and took the name Edward Lee when he became an adult.  McCrea Miller got the family name. At a reception held by the Historical Society at the Argus, the brothers and the McCrea babies got to know each other.  The brothers shared a few family stories that had been passed down to them, and those who had known Dr. McCrea shared stories like crazy.  There was much laughter and fuzzy warm stuff.  Here is McCrea baby Floyd Vrtiska with Edward & McCrea. 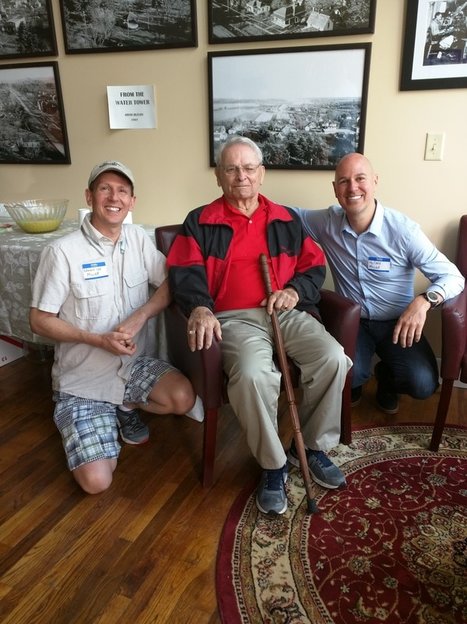 At age 88, Floyd remembers the doctor who brought him into the world and treated his aches and pains through his teenage years.

a baby delivered by dr. mccrea in 1926 - lloyd vrtiska

Yep, there were two of them!  Floyd's twin brother Lloyd is on the list. too!

a baby delivered by dr. mccrea in 1926 - darlene wilcox turnbull

1927, Ed hanna comes into the world with dr. mccrea's assistance

a baby delivered by dr. mccrea in 1928 - ardis gottula hunzeker

Ardis graduated from Table Rock in 1945, along with other notables including Willard Binder, Joe Sochor, and Art Alderman. j In November 2016, she visited the Argus Museum in the company of two of her children, Russ Hunzeker and Judy Siefken.  We stopped at the desk of Dr. Ed McCrea, and I asked if she was born in Table Rock.  "Oh yes," she said, "And Dr. McCrea delivered me!"  I forgot to ask her what the year was! 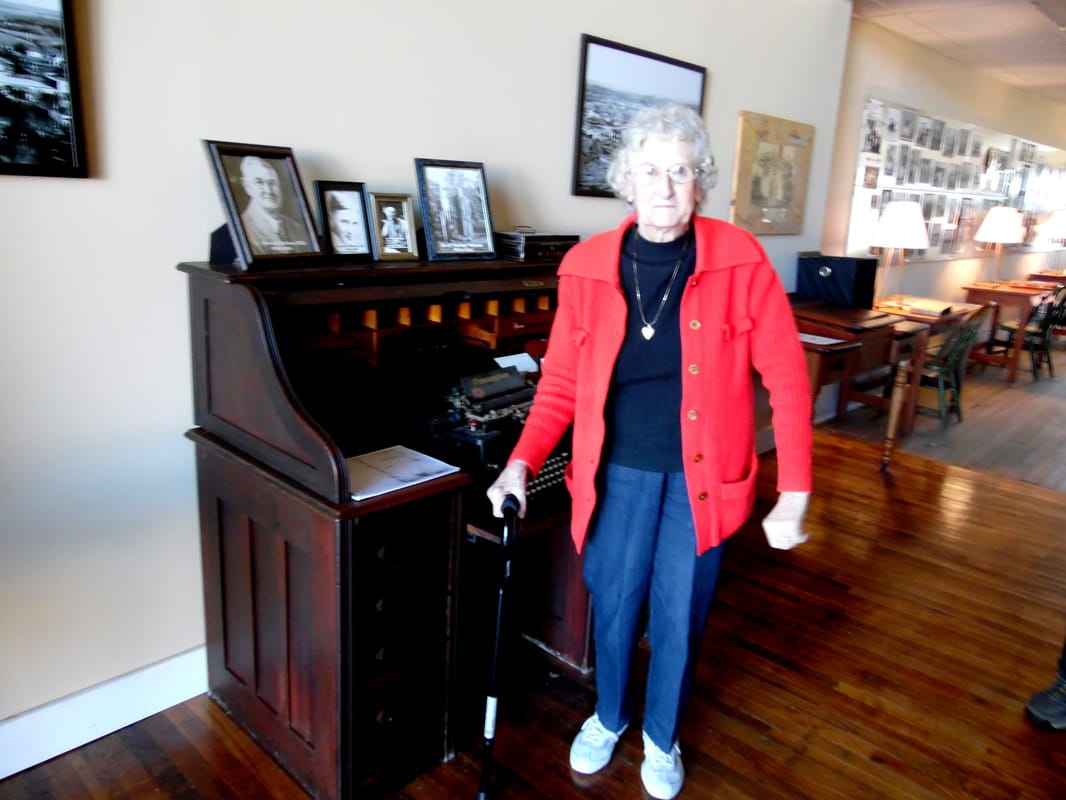 Son Russell gave me a picture of a young Ardis and her husband Arthur, who has passed away.

a baby delivered by dr. mccrea in 1928 - marian day goodenkauf 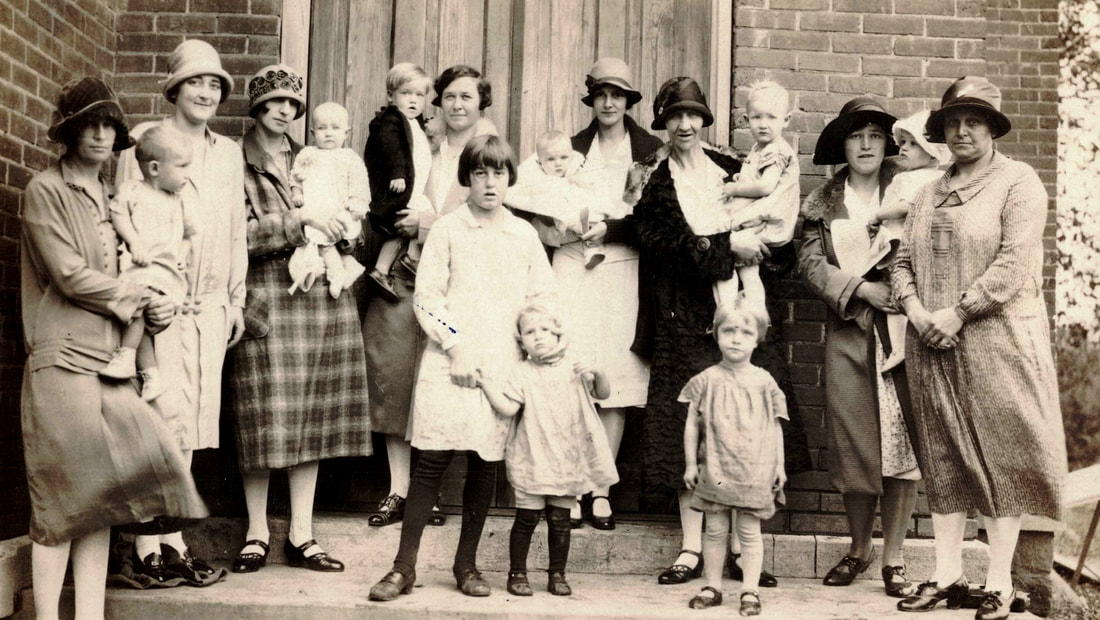 Ladies Aide Group at the Christian Church in about 1928. Marian is held by her mother Laura. They are the mother and baby that are fourth from the left. Photo 1770. 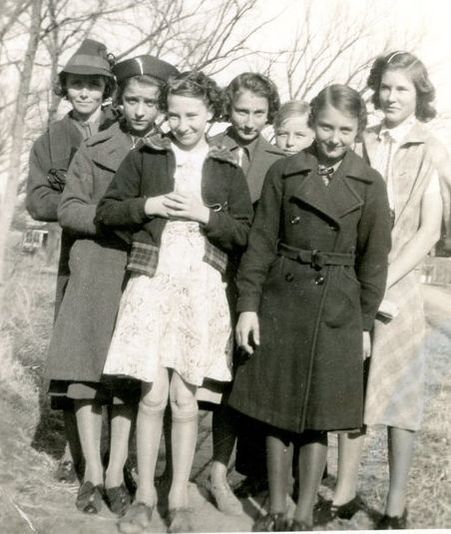 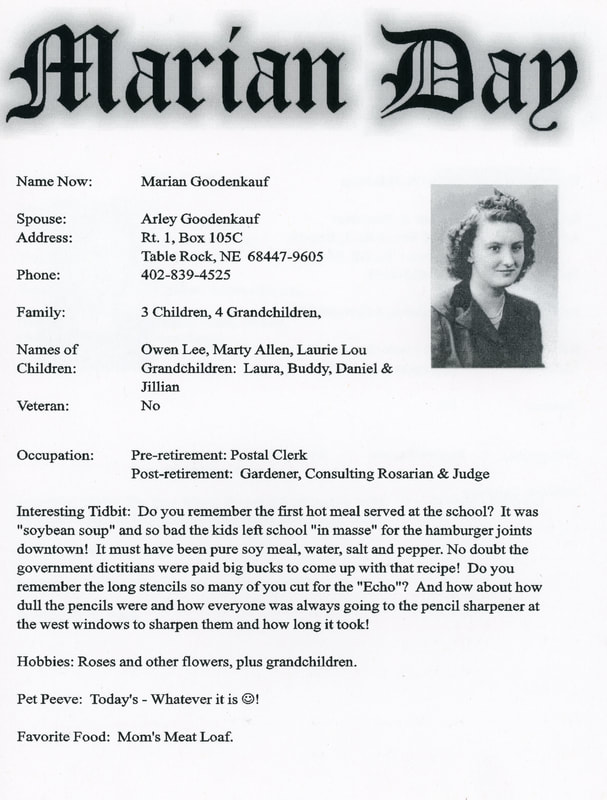 a baby delivered by dr. mccrea in 1928 - evelyn kalina michaelis

baby delivered by dr. mccrea in 1934 & named after him - edward kent

Allen's family moved away, but in the meantime Dr. McCrea delivered him! 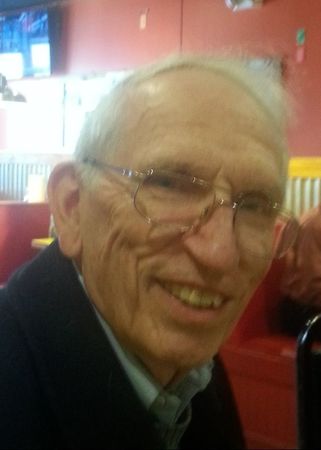 a baby delivered by dr. mccrea in 1940 - gerald anderson

The editor had a dead camera battery and no cell phone when Gerald stopped by for a visit in July 2017!  Hopefully we can add a picture of him soon.  Dr. McCrea delivered him on April 16, 1940.   He lives in Tecumseh.  He recalls the muddy medicine that Dr. McCrea mixed up as "Grandpappy's butter," presumably the same as the Denver Mud remembered by others.

By the way, Gerald remembers Table Rock "back then" pretty well.  One thing that he noted was that on Saturday nights you could hardly find a place to park in Table Rock!

Dr. McCrea’s hospital closed but the building lingered for a long while.  It housed a nursing home for many years, and toward the end was used as a haunted house by the Methodist youth group and also by high school kids.  Nothing remains of it.

read dr. mccrea's autobiography for yourself.  here is the full text of "a book about my life," by e. l. mccrea. 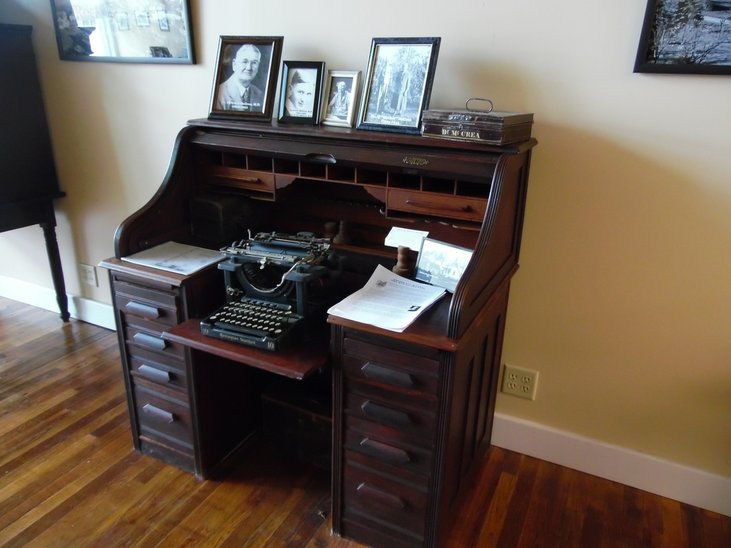 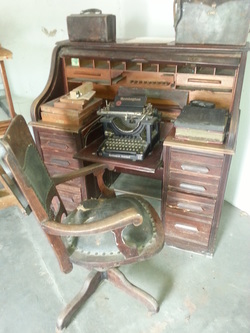 Previously, the desk had been in the Pioneer Museum, where the concrete floor and the dust did not agree with it. In 2016, Dr. McCrea's desk and also Judge Marble's desk were moved to the Argus and given a cleaning and a good rubbing of a bees wax concoction. 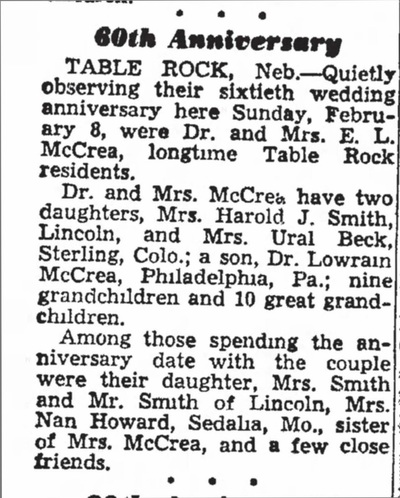 an addendum: the four mccrea children

Sadly, we know little about Veda at this time.  She married Harold J. Smith and lived in Lincoln at one time.  She had at least one child, Arlene. 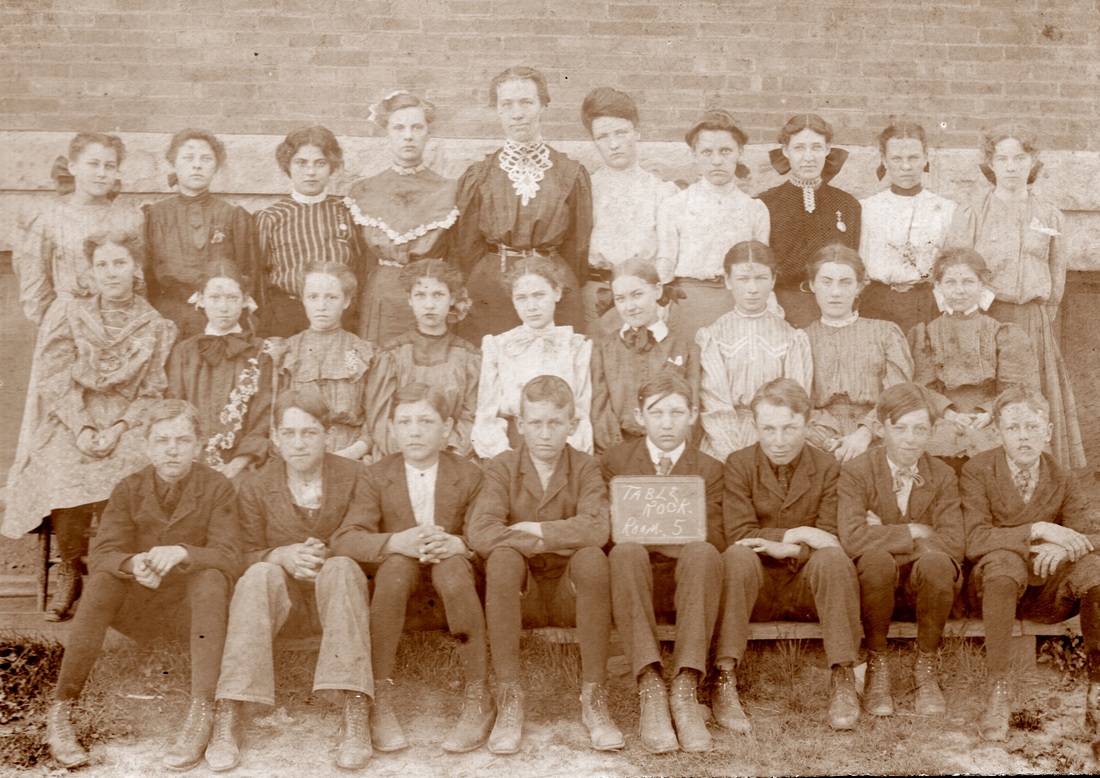 We do know something personal about her: she was a violinist -- so says this August 1907 newspaper article from the Table Rock Argus. ​ 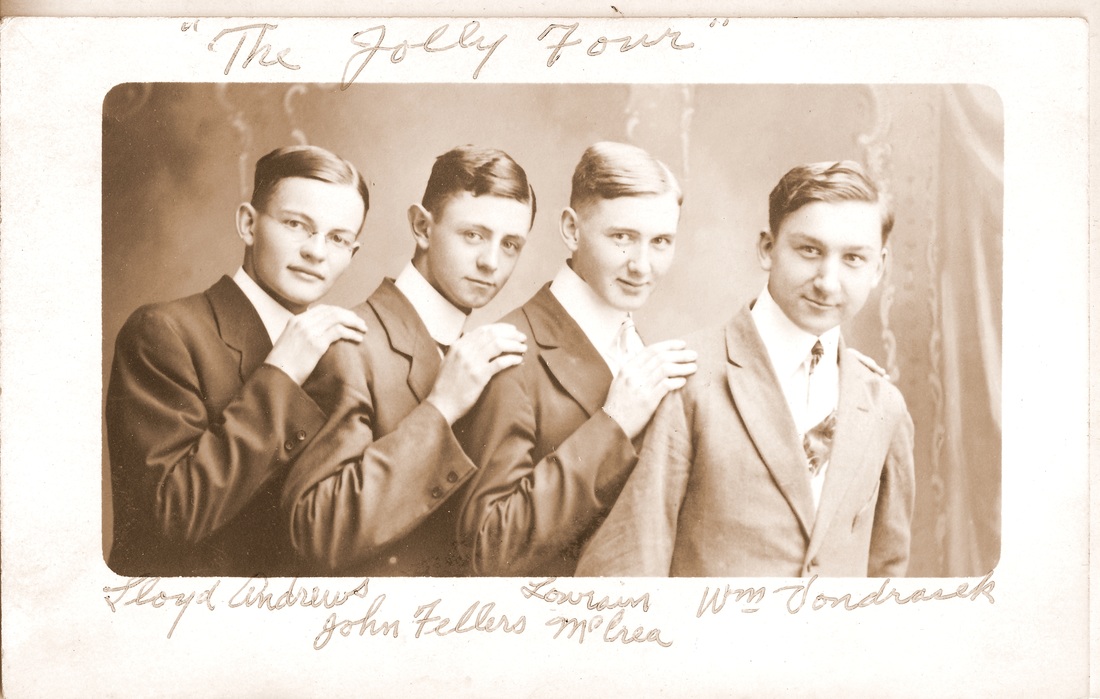 Dr. McCrea's son Lowrain, third from left (1896 - 1980) became a doctor himself. It appears that he practiced in Philadelphia. He died in North Carolina in 1980, at the age of 84. He reportedly had no children.
View My Stats