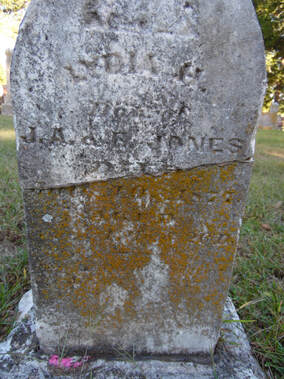 Lydia was the daughter of John and  Ellen Jones, who were both born in Wales. They settled first in Carbondale, Pennsylvania, Ellen first as a child and then John as a young man.  John came to Table Rock in 1858 to make a home for her then brought her here in 1860. They were married by C. W. Giddings, the Methodist minister who led the pioneers of the Nebraska Settlement Company here from 1856-1858.

Lydia is buried in the Table Rock Cemetery.

​typhoid fever
what it is

Typhoid fever was long a scourge of the early settlers and into the 1900s.  A description of typhoid fever from the Table Rock Historical Society Newsletter, 2017, Issue #3, accompanying a story about the 1905 death of Nancy Wood, descrbed in the chronology below.

Juliana was one of the children of Horation N. & Juliana Gere, educated pioneers from Pennsylvania. They came here in 1857 with their young children Hannah Jane, Julia, and George.  Their oldest son, Chester H. Gere, stayed behind to attend college. C. H. Gere was unable to return until after the Civil War.  By that time, his father and sisters were dead and his brother George grown.  He stayed in Table Rock briefly with his mother, then moved to Pawnee City, and then to Lincoln.  His career was auspicious. After politics, he quickly founded the influential Nebraska State Journal.  A library in Lincoln is named after him.

Juliana wrote of the deaths of her two daughters.  She wrote that her dear Hanna Jane, who died in 1857, was the third person to be buried in the new burial ground (the Table Rock Cemetery).  Julia, too, was buried there. Neither the grave of Hanna or of Julia is marked today.  There are several limestone plinths in the northwest quarter of the cemetery that bear many tool marks but no inscriptions. It may be that one of these marks their resting place, or nothing at all.

Juliana's writings were located, transcribed, and digested by Doralyn Steiner Cheney for her fascinating little book, Stories of Settlers Along the Nemaha (Table Rock Historical Society, 2018).   But first, Doralyn started with the words of Julia, herself, as the family first decided to move to the wilds of Nebraska. Doralyn places Julia's writings in context:

young julia's travel to nebraska with her family

After describing how Giddings came about making a decision to bring settlers to Table Rock, Doralyn returns to Julia:
The Gere family arrived at the Table Rock town site on Tuesday, April 7, 1857.  On that day, Julia wrote:
The town site purchased by the Nebraska Settlement Company was located along a creek known as Taylor’s Branch.   In the center of the site was higher land situated on a hill that rose between Taylor’s Branch to the south and Clear Creek to the north.

The Gere family would become one of the earliest families representing the Nebraska Settlement Company to live at Table Rock (Ostwald).  For most of the next year they stayed in a small cabin built by the previous owner, John Fleming—the only dwelling in the town site when they came.  Probably it was located on lower land near Taylor’s Branch on the eastern end of the town site.[1]  The Fleming family, their two boarders and hired man continued to live there until late April while another dwelling was being built for them.  They allowed the Geres to “come in with them at once.”

Julia’s disappointment seemed to subside by the next day.

On different occasions Juliana Gere wrote that they were ½ mile from Mrs. Anderson (see page 24), probably in Section 33, and ½ mile from the Giddings’ house (see page 23) located on the site of the present Methodist Church.
One year after their arrival, Julia’s mother, Juliana Gere, wrote a longer account about their first year at “Table Rock City”[1] from a little notebook she had kept during 1857.

three hand-hewn plinths without inscriptions, not far from a larger one inscribed with the date 1858.  who is buried there? perhaps two are for sisters hanna jane & julia gere?

the story of hanna jane's death in 1857, fever unknown

What was it? The family arrived in May 1857.  Hanna Jane did not thrive, became very fatigued. By late June, a time when no fresh water was available, she developed an unrelenting thirst, and in July fevers set in.
Cheney transcribes Juliana Gere's diary, beginning with this background: ​“Our poor Hannah Jane enjoyed but poor health from our first coming here though at times she seemed pretty well,” wrote Juliana Gere.  “She with the rest of us suffered most from the cold and crowded beds also from unsuitable foods we having no milk and butter but a short time which we brought with us.  Her appetite was poor and she appeared to be laboring under a bad cold.”  The following spring Juliana Gere wrote a number of pages about her young daughter’s illness.  ​
Hannah Jane Gere died on July 18, 1857.  On the following day, the Sabbath, she was buried.

the story of julia's death in 1859
​diptheria

From Stories of Early Settlers Along the Nemaha.

By the end of 1859 there were some who later wrote that a new day had dawned.  Unfortunately, one who had come to “the City of Table Rock” two years earlier hoping that she would be happy in a “log hut in the wilderness” did not live to see that new day.  In the back of his 1858 diary on a page marked “Memoranda” Horatio N. Gere wrote the following words:  “Wed. April 13, 1859   Tonight no meeting.  Julia instead of meeting with the rest as formerly was finishing up her brief life.  She expired about 8 o’clock Thursday a.m.  Dear Julia’s death has made a great impression upon her friends.  May it be lasting.”

​Juliana Gere wrote about her daughter’s battle with diphtheria on unused pages in Julia’s small 1857 diary.  After Julia’s April 9th entry written in pencil (see page 20), her mother penned the following:
​In addition to Horatio and Juliana Gere, Fanny and Lydia Giddings spent that last night near Julia’s bedside.  It may have been sometime later that Juliana Gere added more about Julia’s last night using both sides of five additional pages in the small diary.  (Some pages from August were removed and pinned in among the April pages to provide enough space.)  Starting a new paragraph she wrote:
​After bequeathing some of her possessions to those around to her, Julia asked: 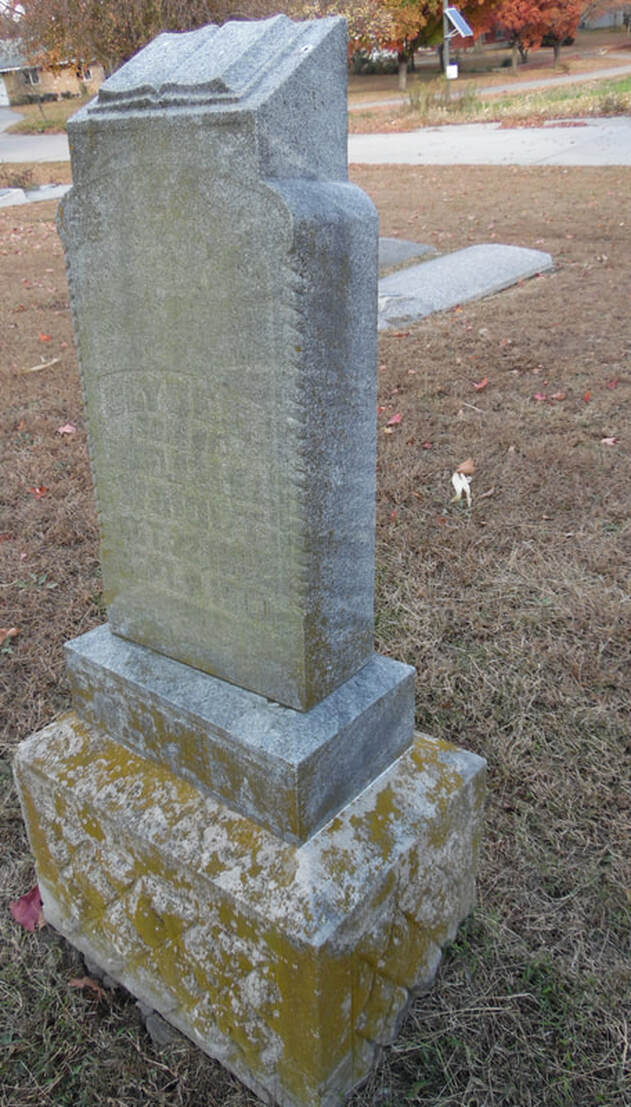 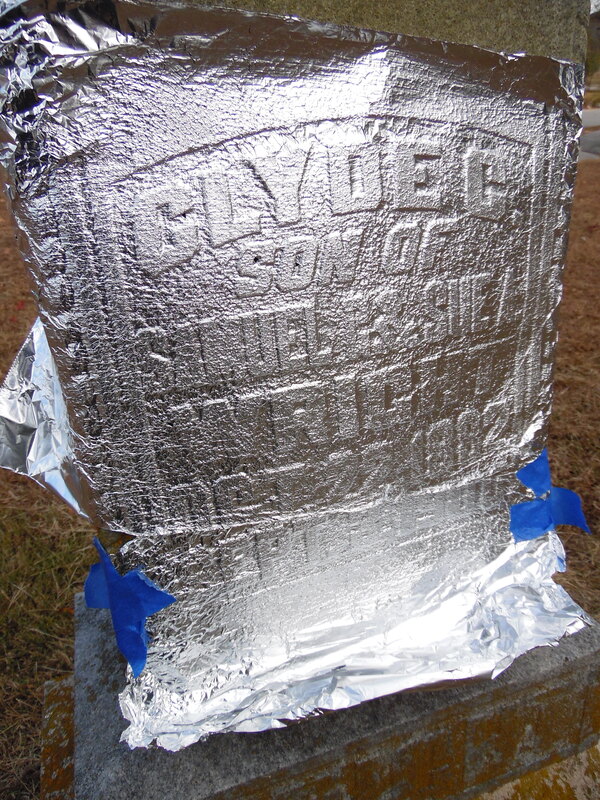 Aluminum foil "casting" in order to read the lettering better 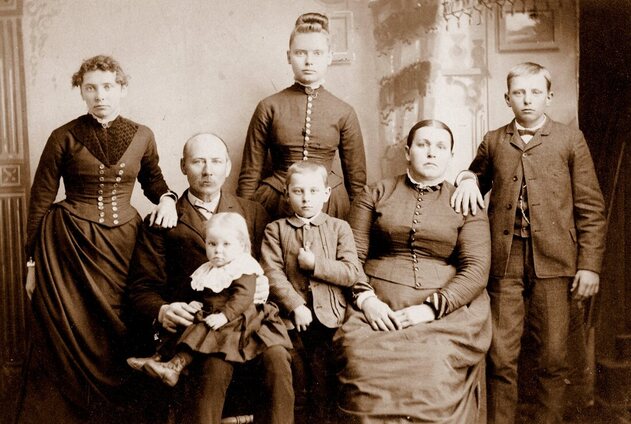 Their children were: Minnie Herrick Asher (1867-1939), William M. Herrick (1869-1962), Lola Herrick Phillips (1872-1970), Infant Herrick (1874-1874), Walter Herrick (1875-1881), John Herrick (1879-1936), and Bessie Herrick Covault (1886-1948).
ary's obituary in the September 5, 1901 Argus describes her death: "Mrs. W. Herrick, wife of one of Pawnee county's prominent farmers residing in Clear Creek, died early yesterday morning from complications arising from typhoid fever. She had been in poor health for a year, and when attacked by typhoid was in poor condition to withstand the ravages of the disease. During the illness of her son, John, with the same malady, she was untiring in her efforts to care for him, then she was taken down and suffered for four or five weeks. The funeral will be held at the house at 2:00 this afternoon, interment in the Table Rock cemetery. She was beloved by a large circle of acquaintances and the sympathy of all goes out to the afflicted husband and children. Bessie, the youngest daughter has much improved, but there is little change in the condition of Mrs. Asher, another daughter, who is down with the same disease."

nancy wood, 1905
TRAVELING AT THE
​AMAZING SPEED OF A MILE A MINUTE
A DESPERATE ATTEMPT TO REACH his wife as she lay dying of typhoid fever

The 1905 Argus article is headlined:: "Mrs. C. S. Wood Passes Away While the Husband is Flying Toward Table Rock at the Rate of a Mile a Minute."  Here's the story by Sharla Sitzman as derived from the article, her obituary and his, reprinted from the Table Rock Historical Society Newsletter, 2017, Issue #3. 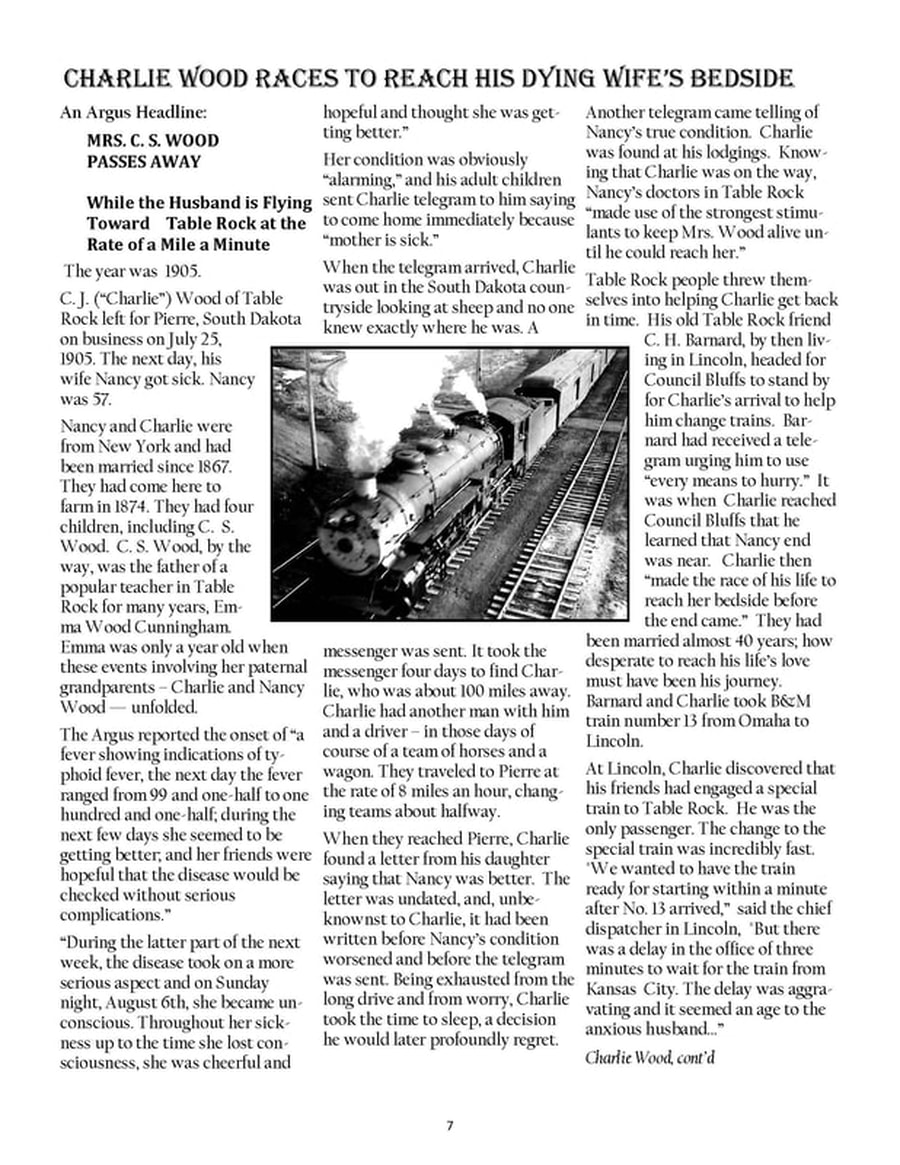 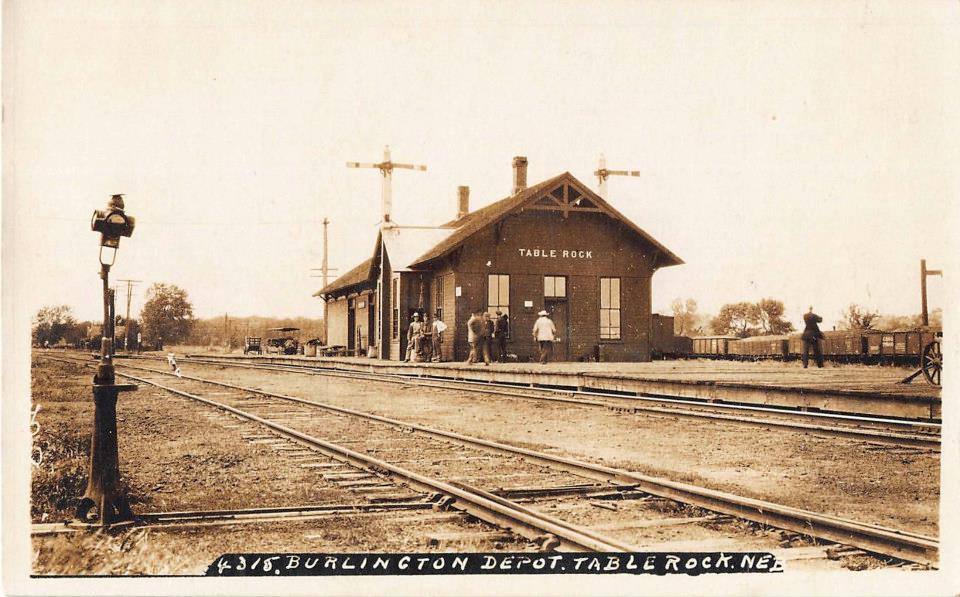 The Table Rock depot as it was when Charles Wood arrived too late to be with his wife Nancy on her deathbed. The previous depot burned in 1892, so this one would have been only 13 years old at the time. (This second one eventually burned down,too.)
View My Stats