There were six Vrtiskas siblings who came to America,  John Vrtiska, Mary Vrtiska Clema, Joseph Vrtiska, Anna Vrtiska Wenzl, and Rudolph Vrtiska. Lloyd and Floyd Vrtiska of Table Rock were descendants of Jan and Josefa (John and Josephine) Vrtiska.  Joe Sochor of Table Rock was a descendant of Joseph and Theresia (John and Theresa) Vrtiska.  John Vertiska, a pharmacist in Humboldt who died in 1972, descended from the third brother, Rudolph.  Those first five settled in or close to Table Rock, but the youngest of the six, Frances Vrtiska Marousek lived in the Chicago area.

The children were born in the Czech lands, in the village of Nemysl (also spelled Nemisel) to parent Jan and Mary Vrtiska.  John was born in 1842, Mary in1844, Joseph in 1846, Anna in 1850, and Frances in 1857. Not long after their father died in 1865, the two oldest boys, John and Joseph, headed for America.  John came to America in 1866.  In early 1867, Joseph came from Bohemia and joined him.  He was living in Chicago and Joseph joined him.  They soon came to Nebraska and settled on a farm near Steinauer.  Their sisters Mary and Anna were here by the 1870 census; Mary married Jan Clema in 1869 and Anna married Joseph Wenzl in 1878.  Brother Rudolph came to America, too, but the first record of his presence in America was not until 1877; by that time, he was living in Humboldt, married to Fannie Eis, and had a son born in 1877 named Rudolph, who went by the last name spelled Vertiska.  Rudolph the son of Rudolph died in 1879.  In 1890, the mother of the four Vrtiska siblings died. 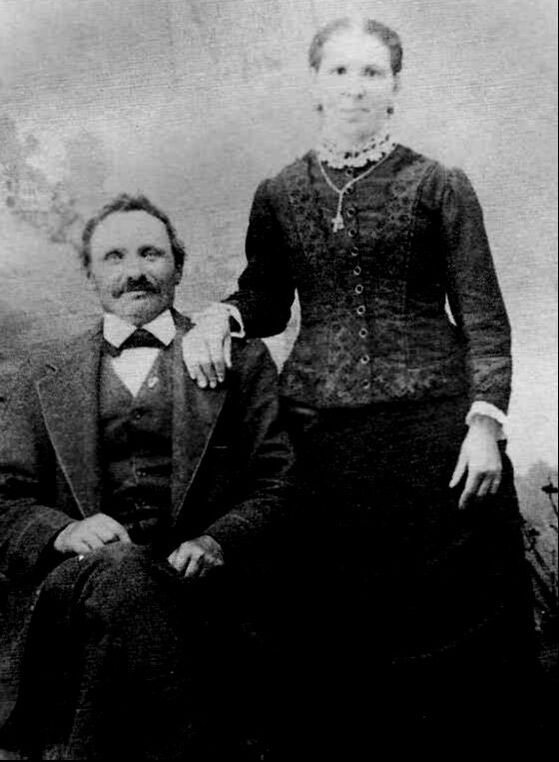 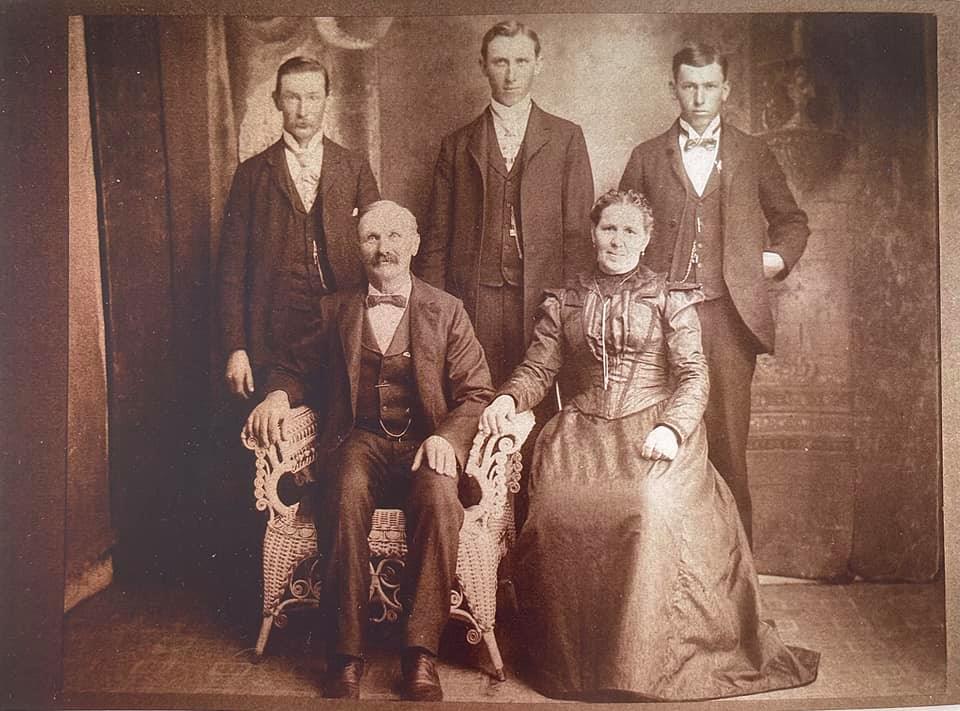 Information about the photo above compiled by Sharylin Vrtiska
Jan (John) Vrtiska was born in the Czech lands in 1842.  In 1866, he came to America.  He was a year in Chicago, and then he went to Steinauer.

Josephine had also been born in the Czech lands, in 1849.  The 1900 and 1910 federal census records reflect Josephine's arrival in 1867, when she was 18. Josephine was the daughter of Albert & Frantiska Kovanda and had siblings Anna, Fannie, James, and Anthony; the entire family came, and all died in Pawnee County, most in Table Rock.

While still in Steinauer, the first of the three sons of John and Josephine Vrtiska arrived, Joseph A.  That was in 1872.

John & Josephine lived on the Table Rock farm for many years.

Ida Foale was the daughter of Oscar & Anna Ciple Foale.  Oscar's father, Peter Foale, was one of the earliest settlers in the Table Rock area, coming in 1856.  Anna was Bohemian and, according to Lloyd Vrtiska, spoke no English.  Lloyd Vrtiska recalled that Czech was spoken at home by Anna and the children.  Lloyd related a family story about his grandfather Oscar complaining that he would be happy when the children were old enough to go to school where they would learn English and he would finally understand what they were saying.

John & Josephine are buried in the Bohemian Cemetery east of Table Rock.

​The cabin was abandoned by the time this photograph was taken.  John and Rudolph appear in the photograph.  It is presumed that their brother Joseph snapped the picture. 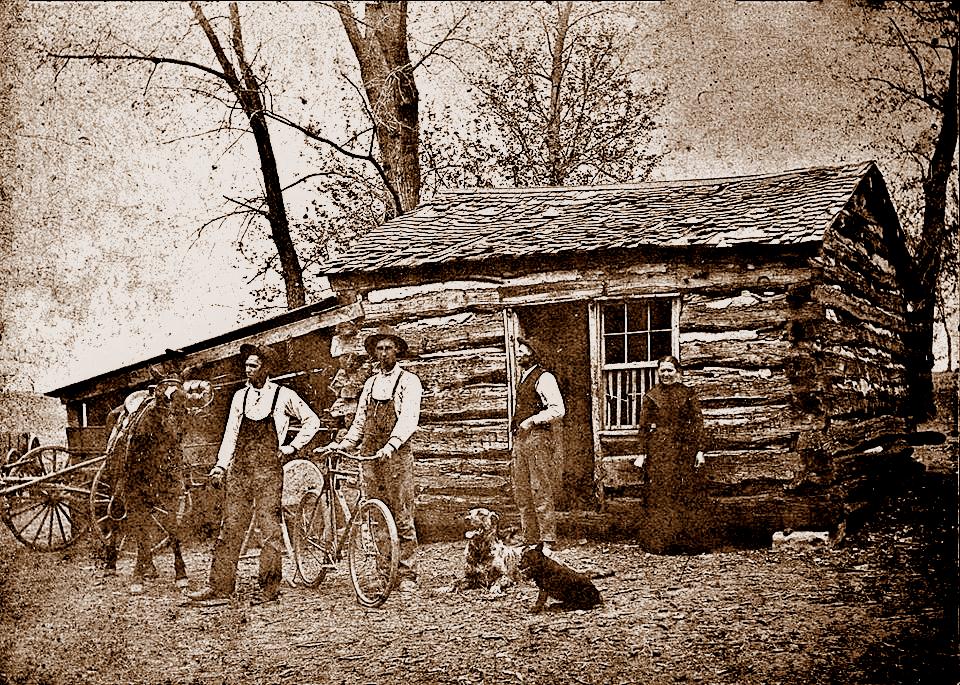 Family trees on Ancestry and memorials on FindaGrave were assessed.  An obituary for Jan was found in the Table Rock Argus, but a careful search did not reveal one for Josefa, who died many years later. At the time that Josefa died, a long-time editor of the Table Rock Argus (Frank Taylor) had passed away and his wife was valiantly trying to keep the paper afloat but with little success.  Mrs. Taylor eventually sold the paper, which passed into the hands of Rudy Senft in 1941.  However, obituaries and other important news items appear to have been overlooked, as few appear in the Argus of this time period. 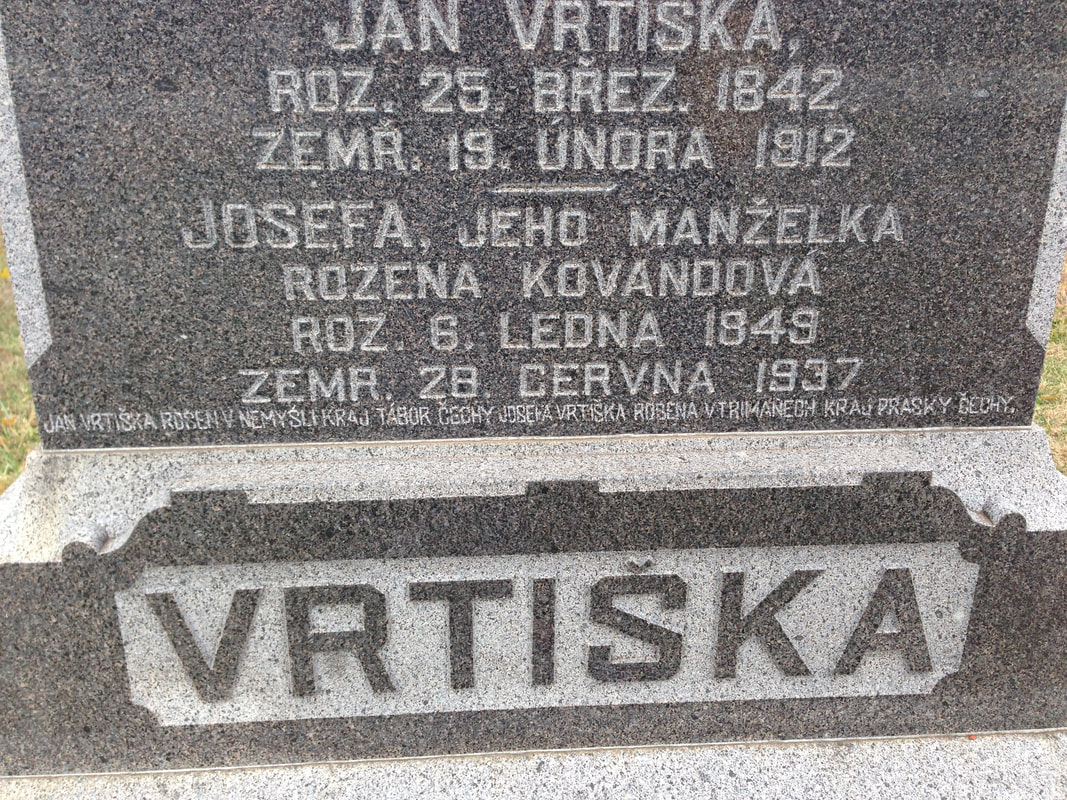 Mr. Vrtiska came to America in 1866, stopping for a year in Chicago, after which he came to Pawnee County, Nebraska.

He lived for a while near Steinauer, but in 1875 he bought a farm north of Table Rock, on which he lived until about four years ago, when he relinquished this farm to his son Rudolph, and bought a farm west of the Nemaha, on which he was living with his son John at the time of his death.

Mr. Vrtiska was married on July 8, 1871 to Miss Josephine Kovanda. To this union three sons were born: Joseph, John and Rudolph, who, with the widow, survive him.

​He was a good citizen, honored and respected by all who knew him.
View My Stats