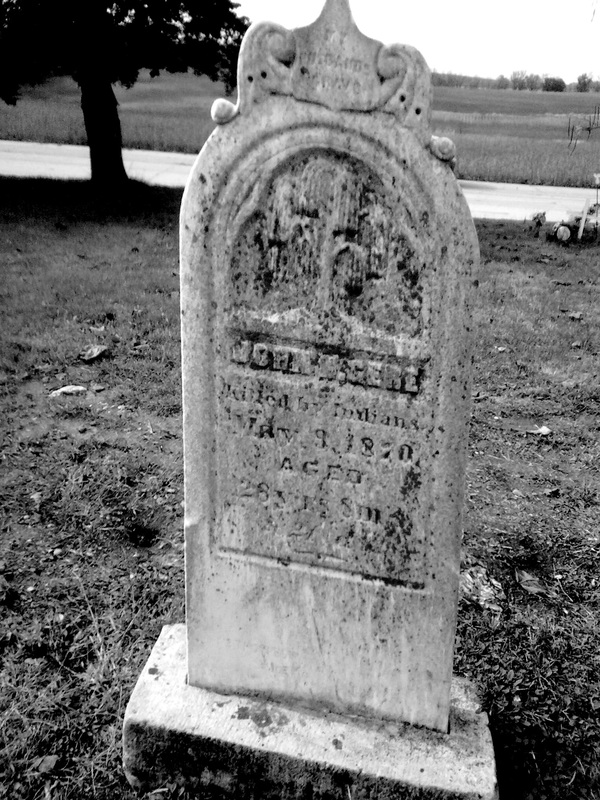 It's hard to read but there it is, "She has done what she could." 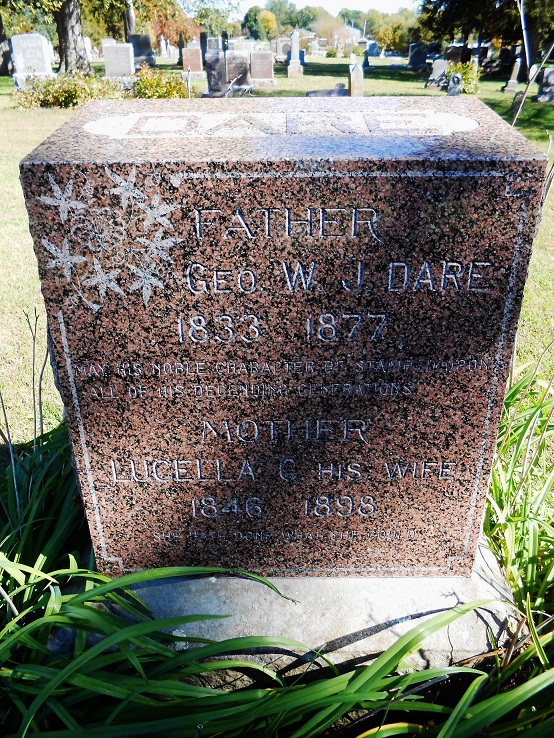 ​epitaph: "His life went out in a mission of mercy"

Leland Wood's tombstone has this epitaph carved on the side, which appears to have been added later.  He drowned while trying to save a neighbor's stock from a flood.  The stock may have meant the difference of penury or breaking even, so his efforts were of a serious intent. 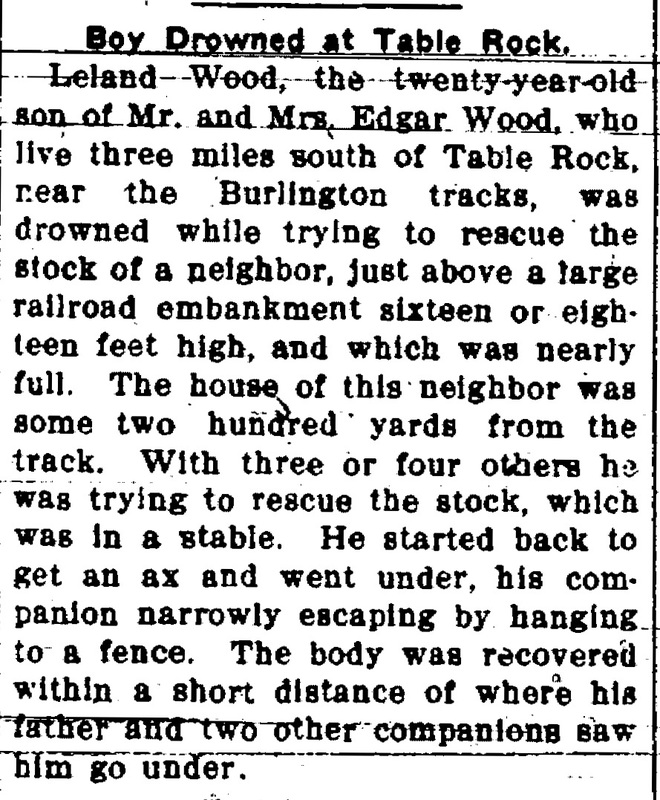 ​epitaph: "At rest."  "here i lay my burden down, change the cross into a crown."

epitaph: "a voice i loved is stilled" 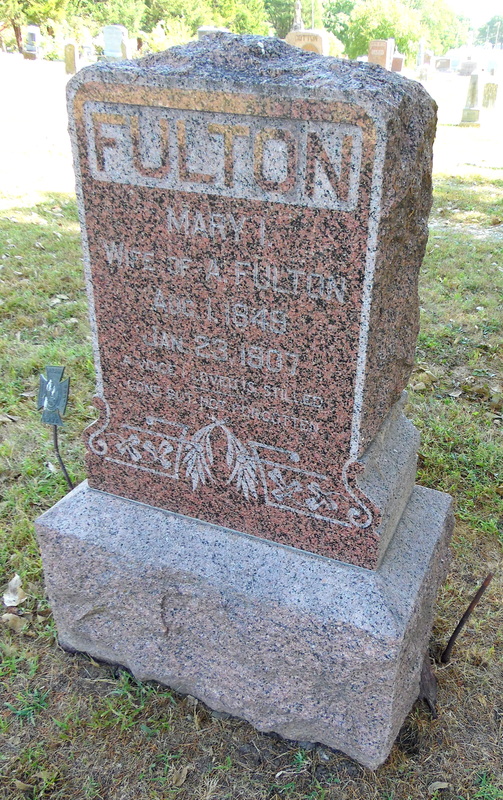 Civil War veteran Alpheus Fulton loved his wife very much.  In her obituary, it says that the two of them grew up together in Ohio, indeed they were rocked together in the same cradle.   The source of this is from a poem whose author is unidentified:

A precious one from us has gone,
A voice we loved is stilled,
A place is vacant in our home,
Which never can be filled.
God in His wisdom has recalled,
The boon his love has given,
And though the body slumbers here,
The soul is safe in heaven.

Mary's obituary said that "most of the family is gone," with only a son and a daughter left.  Alpheus died in the Old Soldiers Home in Leavenworth five years later. His obituary cites only siblings surviving.  No one apparently bought a tombstone for him; his grave is unmarked. Records have been gathered to seek a military tombstone, as of 2019.

Janeth Thatcher Taylor was married to Ken Taylor, a World War II veteran.  Ken's father Lester was a grandson of John & Nancy Kerns Taylor, John a Scot from the Orkney Islands and Nancy a Pennsylvanian whose first husband was killed in the Civil War.  Janeth's history we don't know, but as her stone recognizes, she was a loving wife, mother, and grandma.

EPITAPH: "We loved him, and perhaps too well" 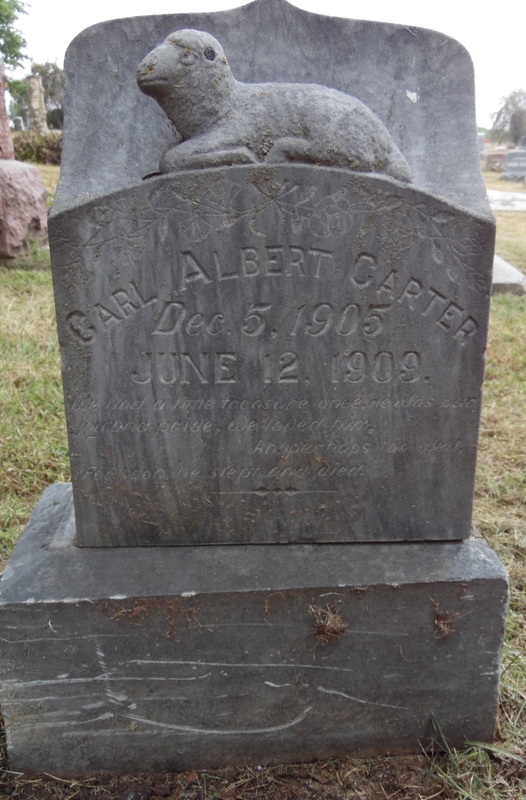 Very touching words for the little boy:
The obituary:

​CARL ALBERT CARTER, son of Frank and Leona Carter, was born December 5, 1905 and died June 12, 1909, aged three years, 6 months and 7 days. The body and parents arrived in Table Rock on No. 42 Sunday evening. The funeral was conducted by the pastor Monday at 10 a.m. and the remains laid to rest in Table Rock beautiful cemetery.

Among the profusion of flowers brought by sympathizing friends, two very beautiful floral pieces were in evidence, the one presented by the Brotherhood of Locomotive Firemen and Engineers, and the other by the Royal Highlanders, orders of which the father was a member.

The parents reside in Alliance, Nebraska, where Mr. Carter has a run as engineer on the Burlington. The grandparents, Mr. and Mrs. J. P. Carter are well known and respected residents of Table Rock. Other relatives live in this vicinity, to all of whom, and especially the parents, a host of friends extend their sympathy. May there be comfort and consolation in the words of David "I shall go to him but he will not return to me."

​EPITAPH: "budded on earth to bloom in heaven" 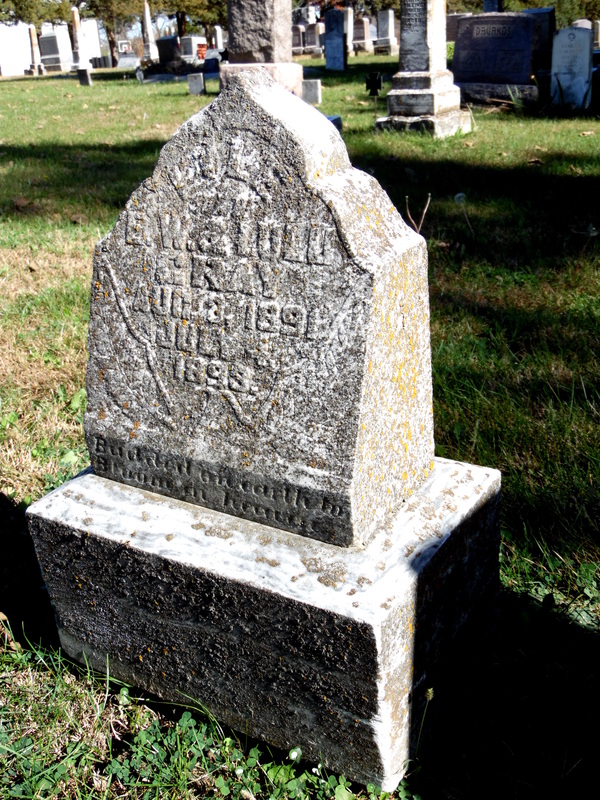 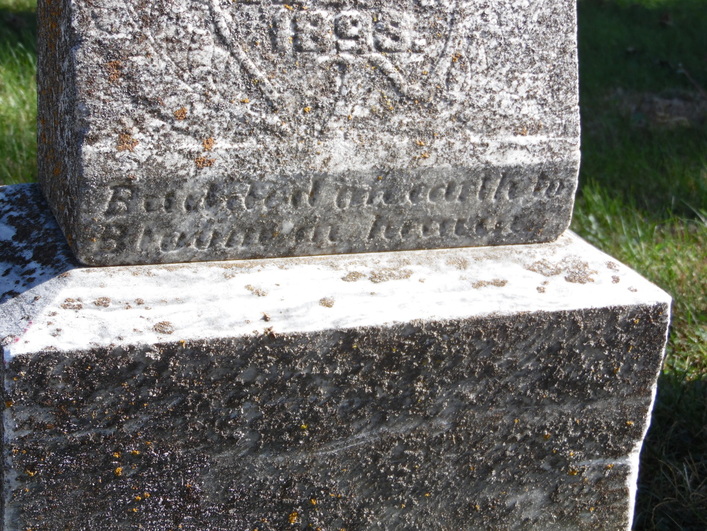 epitaph: earth has one MORTAL less, heaven one angel more

Thank you to Luella Hinrichsen for her painstaking transcription of the epitaph on this weathered stone.  Teresa was the child of William and Anna Marie Reuter Muller (1817-1879, 1823-1877). Nothing else is known of her.  Her mother died the year the Table Rock Catholic church was built, 1877, and her father two years later. (The church was next called St. Wenceslaus, and eventually St. John's.) 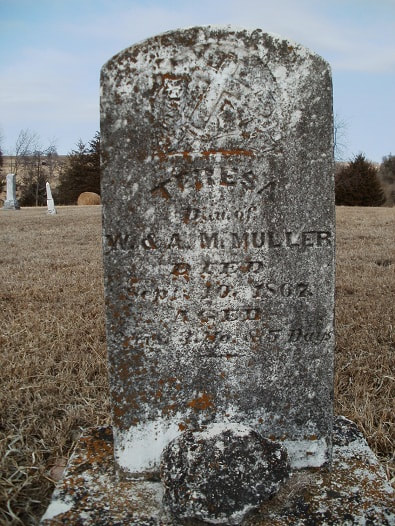 With prospects bright and budding fair.
Just rising into bloom.
Death came in an untimely hour.
And snatched her to the tomb.

Editor's note: I wondered when I saw this epitaph whether it was meant as praise or satire.  Upon inquiry with the sexton, I happily learned that it was praise. 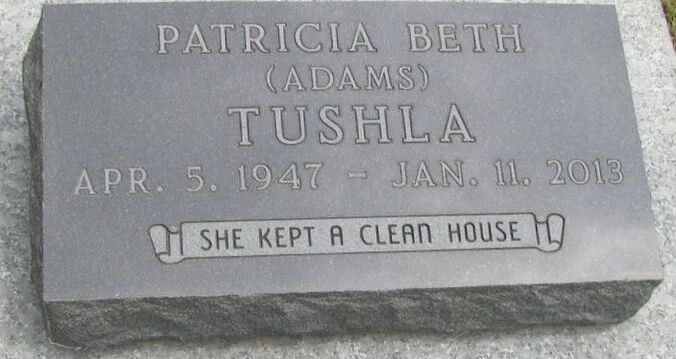 Bob and Becky Sitzman, long time citizens of Table Rock, are buried in Holy Cross in the Sitzman family plot.   Bob wrote his own. Here is the front of the stone for reference.  It is a bench, and on the front and the back of the bench seat are the epitaphs. 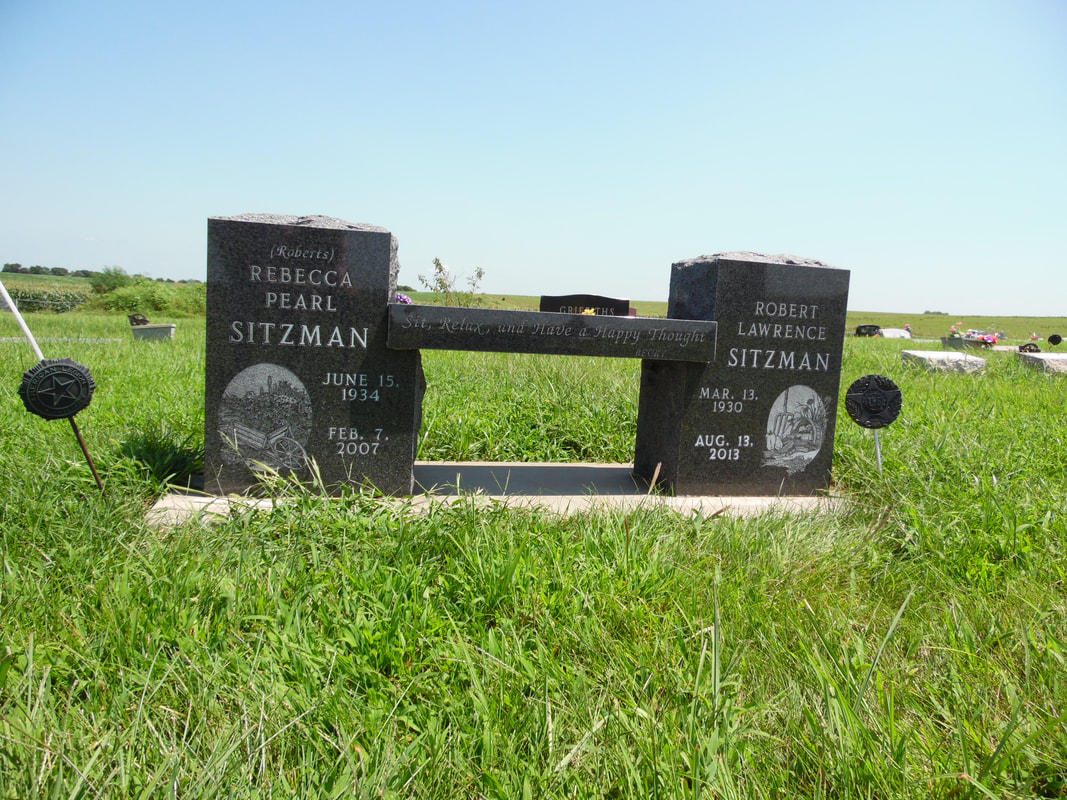 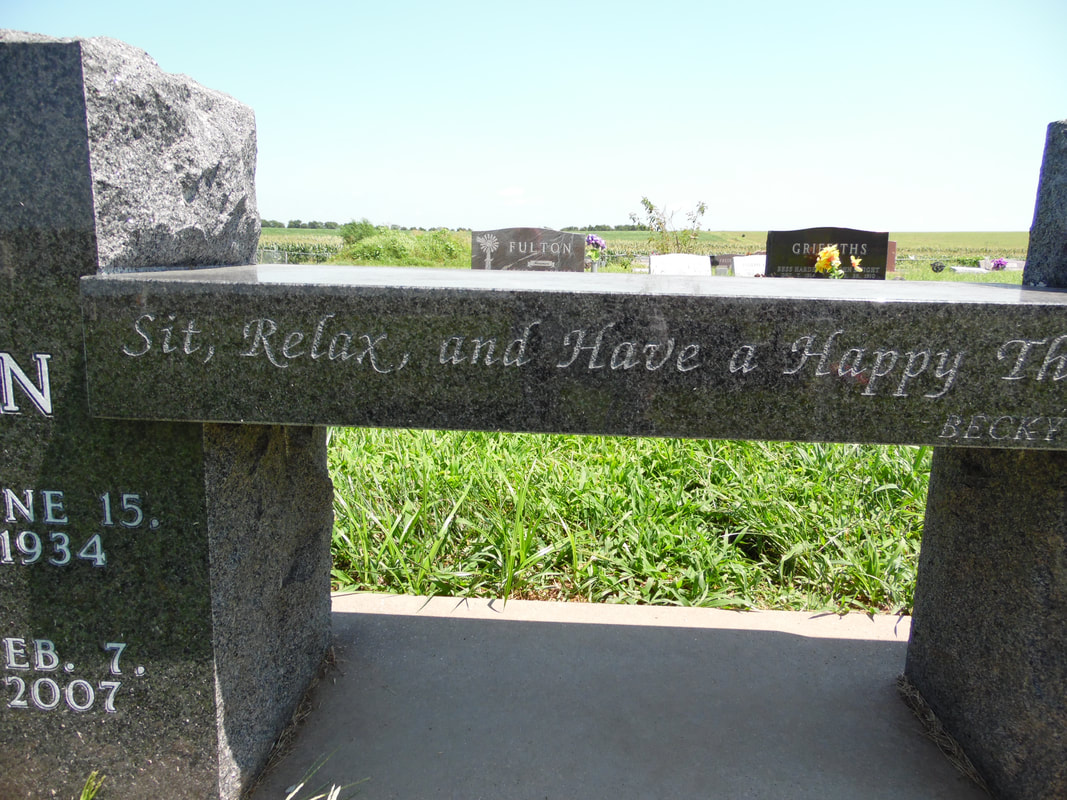 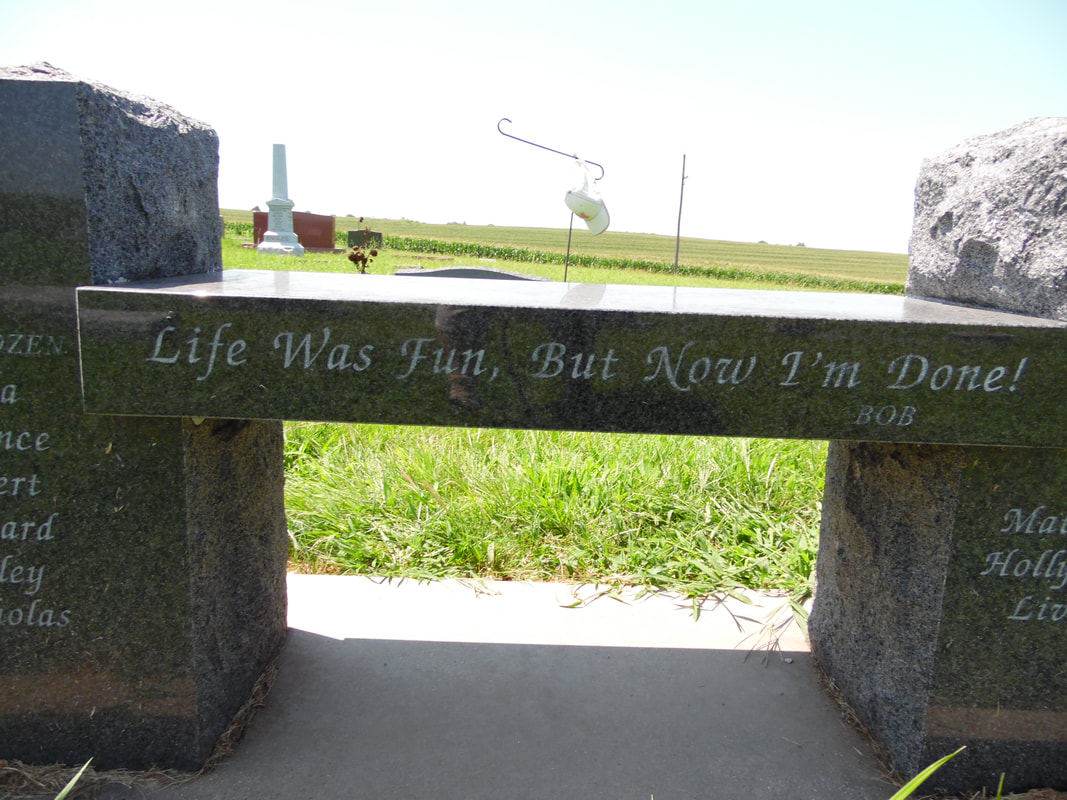 ​EPITAPH: "here lies a farmer. His earthly toils are done, now he walks the fields of heaven." 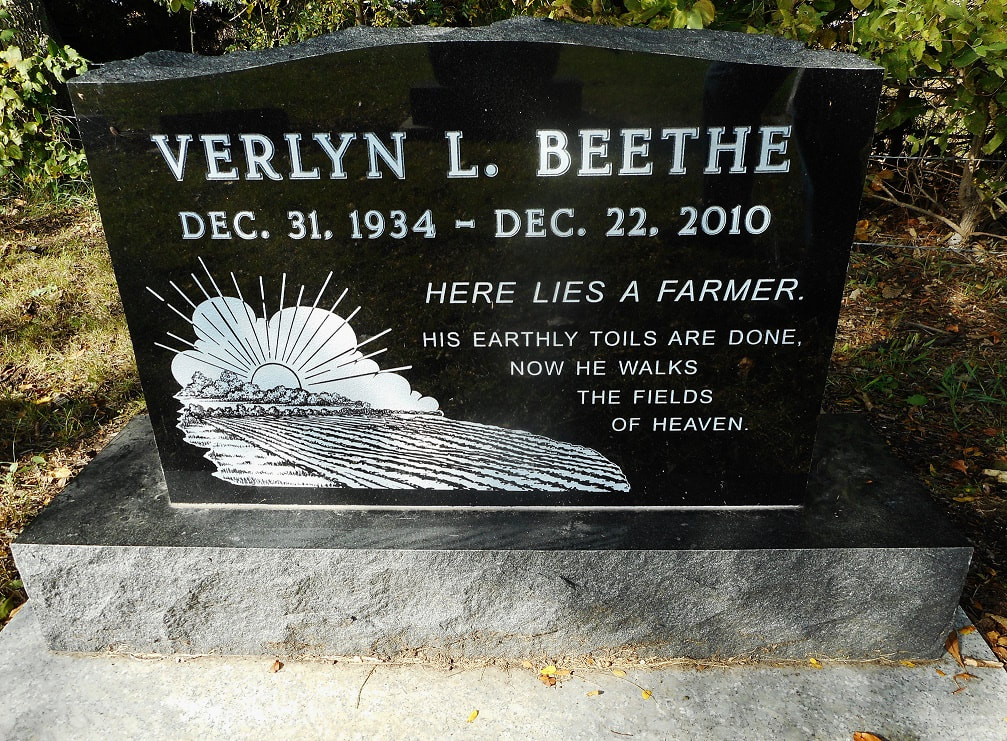 The Table Rock Historical Society placed this tombstone at the grave of their great benefactor, Verlyn Beethe.   The words were penned by two members of the Historical Society.  Verlyn raised Poland China hogs, silhouettes of which are included with some additional text on the back of the stone.
​