It's the Story, Tales from of Table Rock

MURDER OF THE
YOUNG LAUNDRESS
​OF DUBOIS

the death of the murderer

​"He was arrested and lodged in jail. Intense excitement and fear of lynching prevailed. The officers accordingly spirited him out of town," to Beatrice.

The McCook tribune article recited two different "dispatches" from Pawnee City.  One noted Emmons' arrival: "On stepping from the train, with a deputy on each side, he rushed for the bus as if afraid of being [fouly] dealt with.  The news soon spread that he was in the city, and everyone was curious to see him.  The other dispatch:

He was brought back to Pawnee City for a preliminary hearing by the Pawnee County Sheriff, Sheriff Strunk, arriving in the afternoon.  He was arraigned before Judge Belding and given a hearing.

He pleaded not guilty.  He "pretended to know nothing of the murder.  He no doubt had determined to feign insanity."

He was bound over to the district court and placed in a cell in the courthouse jail, which was in the basement.

People were infuriated at Emmons' "effrontery in pleading not guilty to a charge so heinous and so clearly proven." 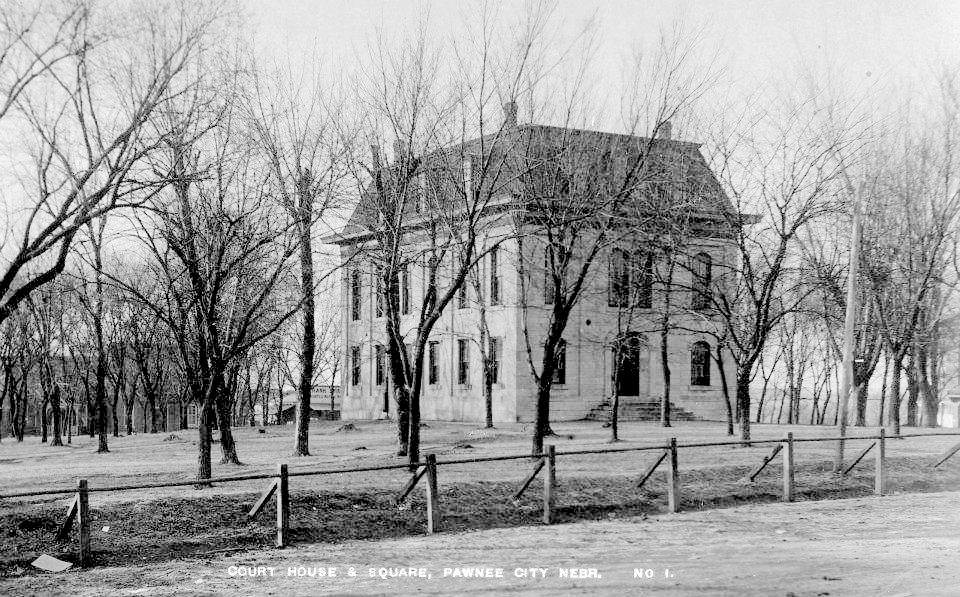 The courthouse that was standing in 1888 when these events occurred. It was replaced by the present one in 1911. Photo 6994, shared by Jeff Lantz

The earliest article, reported in the Pawnee paper the morning of Emmons' death, has the least detail. Within days, additional detail had been added.  "Deputies Liebendorfer and Sullivan were arranging to take Emmons away [from Pawnee City], as an attack was feared at most any time, and had taken him out of his cell but found they were being closely watched and were afraid to risk starting out with him, so they determined to secret him in the courthouse, which they did."

Newspaper accounts differ about the formation of the lynch vigilante mob. Most provide a vague account of a crowd forming and entering the courthouse to seize the prisoner, such as this account of the McCook Tribune:

"Before dark, groups of men could be seen gathered at different places in town.  That Emmons' fate was sealed was without question. Slowly the groups of men drifted toward the courthouse, in the basement of which was the jail." ​

Great excitement prevailed during the afternoon and evening, and it became almost certain that justice would be meted out in a much speedier manner than through the courts. Groups of men, engaged in earnest conversation, could be seen on every corner.   However, about midnight everything became quiet and all seemed well.

The San Francisco Chronicle reported, on the other hand, and perhaps not inconsistently with the report that people had gone home by Midnight, that the vigilantes came in a rush from Dubois:

"At about 2 o'clock in the morning, a mob from the vicinity of Dubois, the home of the murdered girl, entered Pawnee City and surrounded the courthouse."

They entered, found Emmons, and proceeded into the streets with him.

emmons is taken out of his jail cell and hidden on the 3rd floor of the courthouse. the mob ransacks the courthouse
​looking for him.

The Republican on the morning after Emmons' death simply reported:

Emmons was concealed in the third story of the court house, but the crowd discovered his hiding place and took him away from the officials by force

The first reports say merely that Emmons "was taken from the authorities at Pawnee City" and lynched.  One article adds that the mob found the jail open and Emmons gone.  They made a "thorough search" of the courthouse and found him is all one newspaper said.  Another provided a little more information than that Emmons was "taken" from the authorities: "The guards were overpowered and the prisoner taken from them.  He made no resistance."

The McCook Tribune again provided more detail, about a relentless search for the hidden prisoner and the unsuccessful bravery of Deputy Sheriff Liebendorfer in trying to hold the mob off.  After describing the crowd of men drifting toward the courthouse:

"The county attorney and a deputy sheriff noticing the danger, sought to elude the hungry mob by taking the prisoner to the third floor of the building.

About 1 o'clock, forty masked men entered the building, and proceeding to the basement, found the doors of the jail unlocked and their bird flown.  After making a careful search here they proceeded to the courtroom, which was in turn ransacked.  Not finding him there, someone cried, "Look up on the third floor!"

The mob broke down the door leading upstairs, and a mad rush was made for the landing, where they espied standing before them Deputy Sheriff Liebiendorfer, who commanded a halt.

The command was obeyed for a second only.

A rush for Emmons was made, and in a few moments he was dragged downstairs, a rope was put about his neck, and he was marched off in the direction of the Rock Island depot.

The second dispatch to the McCook Tribune, recounted in the same article, after the first dispatch, provided a variation:

Between 2 and 3 o'clock a.m., a body of almost 200 men marched steadily into the courtyard, two men being detailed as guards at each corner of the building.

The jail door had been left open and the mob soon found it was empty, but were determined not be to baffled in their purpose and began a thorough search of the courthouse. They soon found their man, and a rope was immediately put around his neck.

A rope was placed around his neck, and he was led through the public street to the high Chicago, Kansas and Nebraska trestle, over the Burlington and Missouri track. Arriving there the citizens asked that Emmons should be identified as the party wanted. The identification was completed.

A dispatch to the McCook Tribune provided more detail.  The crowd shepherded Emmons toward the Rock Island Railroad depot (there were then two railroad depots in Pawnee City):

​Near this depot was a wagon bridge over the railroad, to which they were first going to hang the victim. But owing to the protestations of citizens living near there they marched him to a railroad bridge spanning the B. and M. tracks.  Here the rope was fastened to a tie.

Emmons was given thirty minutes to say what he desired. He talked rationally and prayed frequently, acknowledging having committed the crime.  ​

Other accounts were more detailed.

In some accounts he confessed, in others he did not. "The prisoner confessed he had deliberately murdered the girl because she had refused to marry him." "He refused to say anything of the crime," "he neither admitted nor denied it."

In some, he asked for a minister to come pray for him, in others the minister was sent for.

In some, he spoke from the bridge, in one he was not on the bridge but was led out onto it after she spoke.

​In all other aspects, they accounts are pretty close. "The party marched to a high railroad bridge on the Rock Island road crossing the B. &  M.  Here Emmons was told he had but a short time to prepare to die."  He had much to say:

He gave the history of his life for the past two years. He claimed to have been a Christian, but he lately had fallen from grace.

He admonished the young men to reform from the habit of using strong drink.

He also stated that he had been disappointed in love; that Miss Schultz had circulated false reports in regard to him, and maintained that he knew nothing about committing the murder.

He asked if a minister was present and would pray for him, after which he asked to pray for himself.  In his prayer he asked God to forgive him for committing the murder, and that God would forgive all those who were implicated in punishing him if they were guilty of any sin.

​[His arms were  tied behind him and his legs free.  A rope around his neck "fastened to a cross-tie over the wagon roadway."] He took several steps further out on the trestle. He was told to jump. Emmons jumped about thirteen feet and died without a struggle

One account said that after Emmons finished speaking, the crowd called for a minister and one came.  "Hats off" was ordered for the minister's prayer, which was followed with a prayer by Emmons.  Then:

Rising from his knees, he said, 'Boys, I will die like a man. I won't show the white feather. No, I am ready. Where is your leader?"

With this the party started for the bridge, and the rope was finally tied to a beam, his hands pinioned, and he was told to step off.

He said that if it was to step off or be pushed off, he chose the former. Feeling his way to the end of the bridge, he sprang off with a drop of about sixteen feet."

Having finished [speaking and praying], Emmons was told to jump from the bridge. He refused at first, but when told he would be pushed off, he hesitated, then leaped into the space below.  The drop was about twelve fee and his neck was apparently broken. He died without a struggle.

The crowd quietly dispersed and left him hanging. He remained suspended until sunrise, and was then cut down and turned over to the undertaker to await the arrival of friends from Kansas.

The lynchers were masked. The attending crowd comprised citizens of all grades.

​"The rope being tied around his neck and fastened to the bridge, he was commanded to jump. At the second command, Emmons made the fatal leap.  His neck was broken. He scarcely made a struggle."

"The job quietly dispersed, leaving the body hanging to the bridge."

The Pawnee Republican article described the events and, in the headlines, referred to Emmons' death as "suicide."

​​One article had Emmons stepping off the bridge to his death and then being found by the coroner.  There was actually a space of time, as Emmons' body was left "dangling." The coroner's jury apparently went out to the scene at sunrise.  Their verdict: Emmons came to his death at the hands of parties unkown.

One of the dispatches to the McCook Tribune summarized local feelings:

The sentiment of our people generally is that the law should have taken the course, but that full justice was done the wretch. At this time, everything is as quiet as if nothing unusual had happened."

In any event, it is the only known instance of vigilante justice in Pawnee City.

What of Bertha Schultz, what was lost to the world?  Was Bertha Schultz a sweet girl, a lovely girl, a girl who had at one point been in love?  Was she unhappy, joyful, spiteful, a loving daughter or sister?  What would have become of her had she gone forward from age 25?  How would the small world within she walked have changed?  We don't know.  We know only what is above. She was from Dubois, she turned Emmons' marriage proposal down, and he murdered her. So little to know about a life taken too soon.  So sad that the manner of her death is the only knowledge of her that remains.

Luella Hinrichsen recently traced out the epitaph on Bertha's tombstone.  It is a poem, and says:

Bertha is buried at St. Peter's Evangelical Cemetery by Dubois and Emmons is buried in the Pawnee City Cemetery. 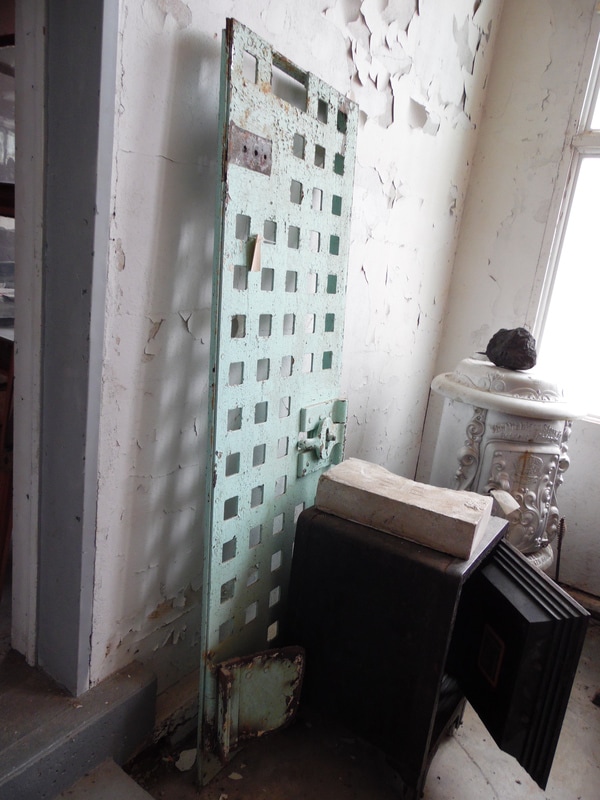 IN THE PIONEER MUSEUM, SITTING BEHIND AN OPEN SAFE AND NEXT TO A MICHIGAN POTBELLY STOVE IS THE JAIL DOOR FOR THE COUNTY COURTHOUSE. REPORTEDLY, THIS DOOR IS FROM THE CURRENT COURTHOUSE, WHICH WAS BUILT IN 1911. IT PROBABLY NEVER SAW A NIGHT LIKE THE ONE IN 1888 WHEN VIGILANTES CAME FOR THE MURDERER OF BERTHA SCHULTZ, A YOUNG GIRL WHO HAD DONE NOTHING MORE THAN REFUSE A PROPOSAL OF MARRIAGE.
View My Stats