McCourtney & sons, movers of everything

McCourtney & Sons was Charlie and his three boys; he also had a nephew or two, and a couple of hired men.  Delores used tohelp, too.  “I would drive the coal truck , pump water for the steam engines and all that stuff. They would put me to work.”
McCourtney and sons moved everything.  They moved houses, churches, barns, a grain mill, put a ferry boat in the river after it was built, and also moved a great big generator for a power plant in Brownville.

They moved things everywhere.  “That was the fun part," Delores said.  "We’d go for a ride, and Dad would say, we moved this, we moved that, that house,that barn.  It seems like we couldn’t go a mile without him saying something like that.”
I mentioned the picture of the bridge that Charlie McCourtney built across the Nemaha River to get a house across. Delores of course knew the picture.  She said, "I’m that little girl standing there on that plank."  And there she is.  On the left of the picture, she stands on a plank, the skirt of her dress floating the in the breeze. 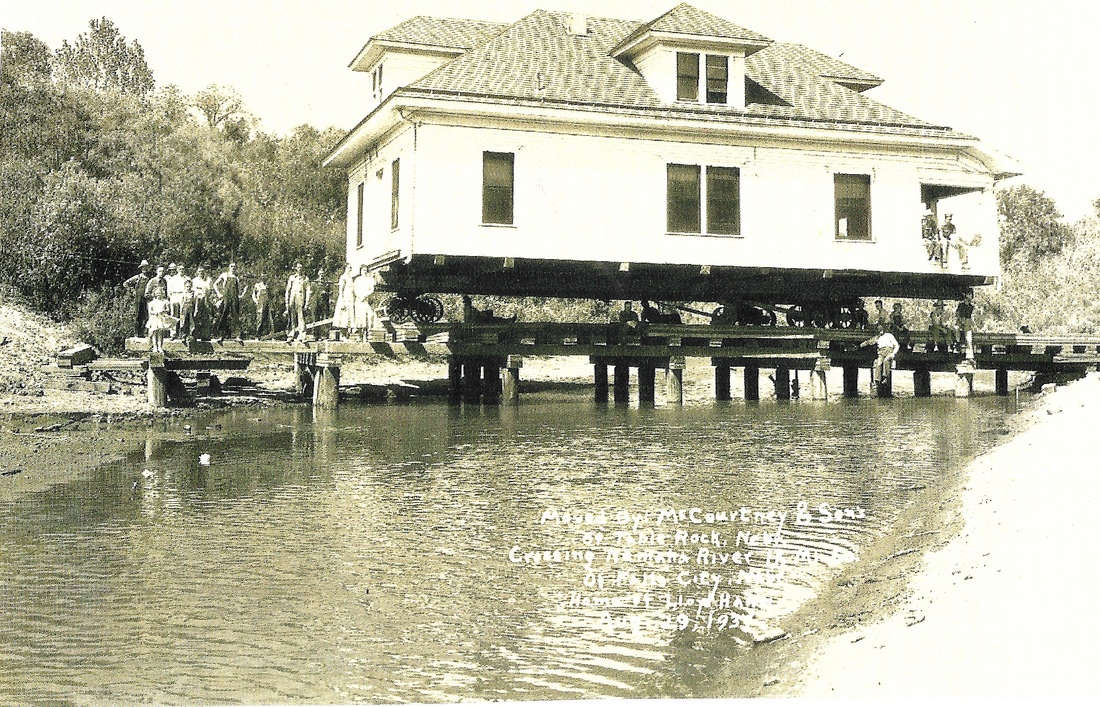 This is Photo 583. On the back it says, "“McCourtneys made own bridge over the Nemaha south of Falls City. [Cabled?] it up and down the bank.” The annotation on the face of the photograph is difficult to read. It does identify the owners of the home but is mostly illegible. Home of Lloyd A...? The moving date was August of 1930 something.
Of the picture, Delores also said, "Grandpa was there, my mom, my dad.  Gary Harris’s dad worked for Grandpa, Jem Harris, he’s in that picture. Lester was his name but they never called him that.”   Quite a number of other people were there -- seated on the porch, under the house, on the bridge.

I was told a story last weekend about this particular event.  Everyone watched McCourtneys building that bridge, and they REALLY wanted to see him bring the house across.  The afternoon that he finished the bridge, Charlie told them to come out the next morning and watch.  The next morning, people showed up, and the house was already across.  He had moved it the night before. He hadn't wanted to have people underfoot.
I also asked Delores about two pictures of the same house being moved, Photo 63: 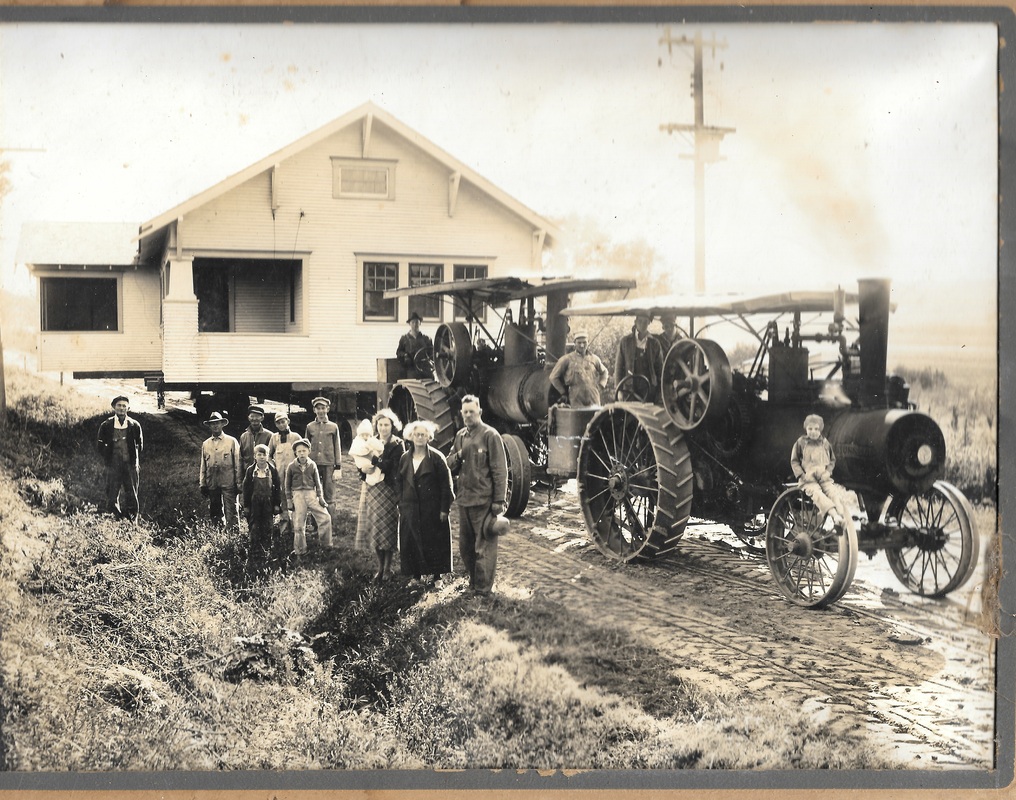 There is Charlie in the large group of people on the left.  He is the person on the far right of that group.

I mentioned the two photos of a house being pulled with many people standing around. I’d heard it was her grandpa Charlie McCourtney's own house.  “It was,” she said.  “It came from Lewiston.  A lot of those kids in that picture were Rottman kids.  Charlie Binder owns it right now, it’s sitting there empty.”  The house is a little way west of Table Rock. Go straight west on the south side of town.  Don’t take the road to Pawnee, keep going straight. It’s the second house on the left hand side. There’s three houses there, and it’s the one in the middle.  Not within town limits.

Here's another view of the event, Photo 44: 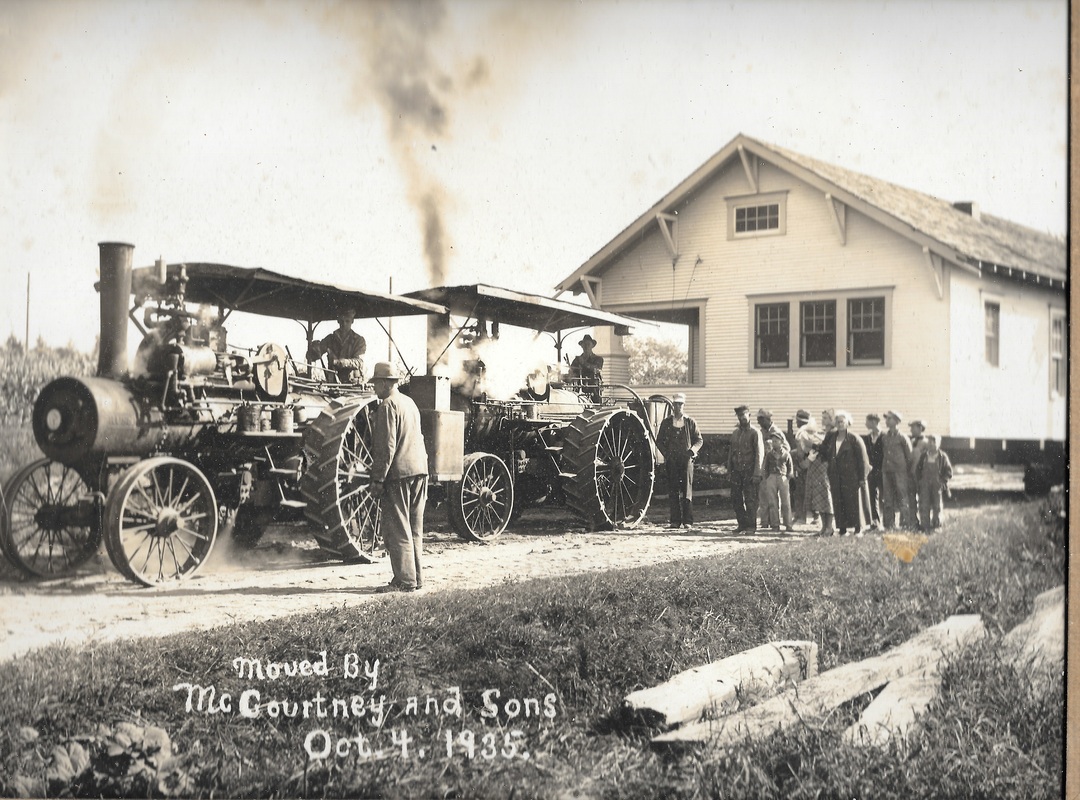 More from Delores about McCourtney & sons:

“The biggest project they had was a three-story building in Fremont. It was a boarding house or something. If I remember right, it was brick. Dad showed it to me one time.”

“That was the fun part.  We’d go for a ride, and Dad would say, we moved this, we moved that, that house,that barn.  It seems like we couldn’t go a mile without him saying something like that.”

“Another interesting fact," she said. "One time Dad and them moved a building full of flax seed.  We always stayed all night. We took our blankets and laid it on the flax and slept there all night.  The next morning they all looked like prunes; flax is a poultice you know, they were all dried out!”

One time her dad was helping move a house down on the Missouri River.  The river flooded and the blocking and everything was going down the river.  Dad fell in.  He didn’t know how to swim.   He got his shoulder hurt, some blocking hit him.  It saved his life.  He grabbed on to it and it angled back to shore with him. \

One time they were moving a house that was full of black snakes.  My dad hated snakes.  When they were raising a house up, Grandpa would yell “OOOP!” – up -- and everyone would pump a jack at the same time.  Dad would always look first before he grabbed a jack.  He was not going to go OOOP if there was a snake there.

People fed them when they were moving a house. Sometimes Dad didn’t eat.  One place, when they got there, the woman was changing a dirty diaper. Got the baby changed, laid him down, and come over and started slicing bread.  Dad didn’t eat a thing. He couldn’t believe how some people could be that way.”
View My Stats