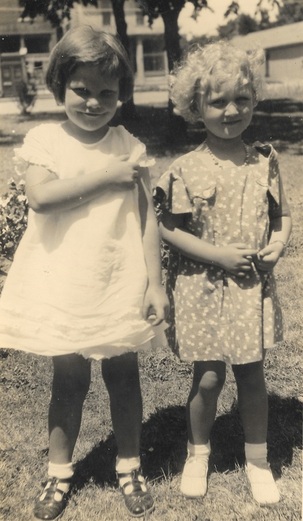 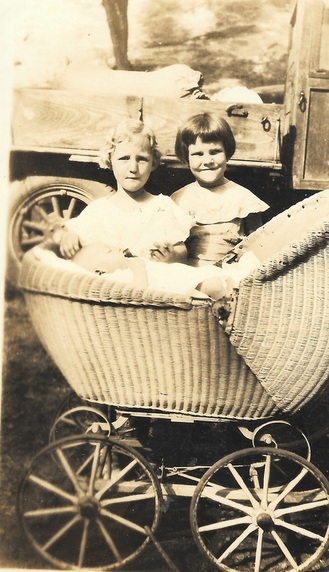 Delores said, "Folks had great big horses then, you know, like a Clydesdale type.  Dad would put us on one and our feet would stick straight out.”


But when her dad, Bruce, was growing up, they had a very special pony.  Delores described this pet who died before she was born but fondly remembered by the family.  “They had a pony, I don’t know where grandpa bought it. White with a brown spot. Grandma would make pies and bread to send out to the men for their lunches.  The pony’s name -- her name -- was Mitch.  Grandpa would take her out with him and would just have to show her one time where to go, and he’d send her home. When Mitch got there, Grandma would load her up with goodies and off Mitch would go to find Grandpa.  Mitch never couldn’t find them.”

She used to take the kids to school, then she come home. When it came time for school to be out, nobody needed to tell her.  Off she went to bring them home.  When they needed groceries, Grandma sent the pony off to town with the buggy.  The grocer would put what was ordered in it.  She’d go anywhere they’d tell her.”

“When Mitch died, it was on the front page of the Table Rock Argus. Unfortunately, the article identified Mitch as a he rather than a she.  Aunt Maude cried, he was a she! That’s why Mitch was so smart.”

Delores says, “I got two wheels off her buggy.”  When Mitch died, she’d pretty well used the buggy up.

“There was only three boys left.  One son with the first wife died at nine years old. There was an Edna between Maude and Hazel and a buggy run over her and killed her, just over a year old; she was thrown out of the buggy and it run over her. It wasn’t Mitch pulling the buggy, though, that never would have happened.  It was a great big horse you know, like a Clydesdale.  Dad would put us on it and our feet would stick straight out.”

By the way, Mitch loved onion “tops.”  “They said she had bad breath,” Delores added.