stories of civil war veterans
​of table rock
The information provided here relates primarily to their military service
All veterans who lived in table rock may be included. this is Unlike the Roll of Honor page, which consists of veterans  buried in the cemetery with the exception of several who lived most of their lives in table rock but spent a brief time in declining years elsewhere with children. 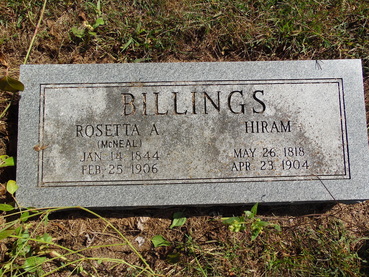 ​Hiram Billings is a Civil War veteran. He came to Table Rock in the 1850s, living in a dug out in the earliest years, as did many of the settlers.   After his wife died in 1861, he went back to Ohio to enlist, leaving three young children.  His daughter was adopted by the Dimons.  What happened to his two sons by his first wife, Nancy, is unknown.  He did come back to Table Rock and did remarry.  His second wife, Rosetta, was a younger sister of William McNeal, the only Table Rock man who died in the war.  They had two children together, a son and a daughter.

He was already 43 years old when he enlisted in Company B of the 67th Ohio Infantry on December 2, 1861. The unit mustered out on December 12, 1865, months after the end of the war. His unit pursued Lee and they were at Appomattox for Lee's surrender.

The following additional information is provided by a regimental history taken from volume 2 of "The Union Army" by Federal Publishing Company, 1908:

Charles Moe: He was there. See Line 18.
Responding to President Lincoln’s request, seventeen hundred fifty-eight riders volunteered for duty with the Sixth Ohio Cavalry Regiment. The Sixth Ohio was mustered into service between October 2 and December 12, 1861 at Camp Hutchison, in Warren, Ohio. The 6th was on duty at Warren until January 1862, and then garrisoned at Camp Chase and Camp Dennison, where they were finally given their horses, until May 1862 when they were ordered to join the Army of the Potomac.

The unit clashed with Confederate forces for the first time at Woodstock, Va.  June 2, 1862. During the next 34 months, the Sixth would engage the enemy more than 50 times.

The Ohio regiment’s affiliation with the Army of the Potomac led to gallant service at the Second Battle of Manassas, Fredericksburg, Kelley’s Ford (the first pure cavalry fight east of the Mississippi involving a battalion or more on each side), Gettysburg, Yellow Tavern, Cold Harbor, Malvern Hill, Five Forks and Sailor’s Creek.

The 6th was heavily involved in the Gettysburg Campaign, fighting at the Battle of Brandy Station and in several smaller engagements during the Union operations in the Loudoun Valley of Virginia, including the battles of Aldie, Middleburg, and Upperville.

It traveled into Pennsylvania with the division as part of the brigade of Col. Pennock Huey, but before the Battle of Gettysburg withdrew to Westminster, Maryland, to guard the army’s supply trains.

The regiment was active during the retreat of the Confederate Army of Northern Virginia in July.

The Sixth Ohio fought during the final days of the war at Appomattox Courthouse, and was present when General Robert E. Lee surrendered on April 9, 1865. The Regiment was mustered out of service at Petersburg, Va., on August 7, 1865. This Regiment sustained heavy loss in officers and men during its eventful career. 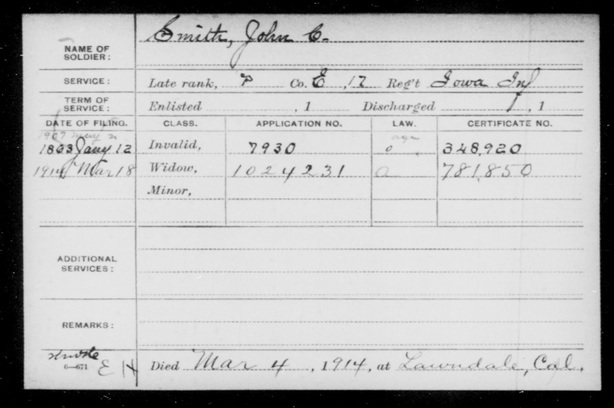 John C. Smith was a member of GAR Post #165 in Table Rock, Nebraska, where he lived for many years.  In older times, he was called “Uncle John.”

He was here until at least July 1913, as the news of the time reflects that he went to the Gettysburg reunion that month.  However, he was in California when he died in 1914 and is buried in the GAR section of the Inglewood Cemetery (Los Angeles County).

He had probably moved to California, rather than died during a temporary stay.  His wife Sarah did not die until 1929 and is buried next to him.  Since she stayed, they presumably had taken up residence, most likely with an adult child. This is all speculation.

He was from Pennsylvania, and had served in the Civil War, enlisting from his then-residence in Wapello County, Iowa. He was a private in Company E of the 17th Iowa Infantry.  He served from March 11, 1862 to August 6, 1862 and fought at the famous battle of Shiloh.  He was then discharged due to disease.

Oddly, he attended the famous Gettysburg reunion in 1913. That event was limited to veterans of the battle and selections were made by the Grand Army of the Republic.  The G.A.R. records about the selection are in the possession of the State Historical Society but offer little more than names, and usually (but not always) the military unit.   The veterans going to the Gettysburg reunion had their way paid by the State of Nebraska and once there accommodations and food in an elaborate tent city were furnished by the federal government. It does not appear that his unit was at Gettysburg, yet we know from articles in the newspaper locally and elsewhere, that he was selected and did attend. 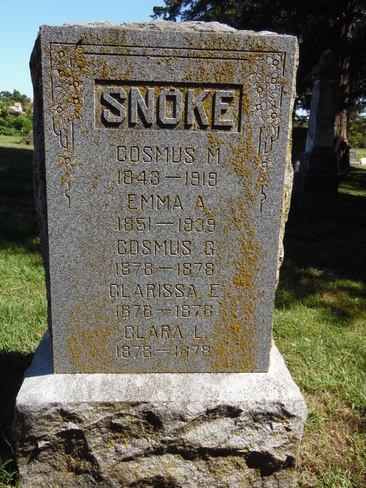 Additional service in Co. A of 48TH “Mil. Infantry,” dates of service not yet found.

The March 7, 1919 Table Rock Argusreprinted an obituary from the Humboldt Standard.
View My Stats