Back to Civil War
Back to just interesting things

Henry Merwin brought his family to Table Rock in 1882. He was a Civil War veteran with a mangled hand.

The Table Rock of that time was beginning to grow, headed towards its highest population in 1900.  The streets were dirt, the sidewalks boards, and virtually all the buildings of wood or local stone. The brick factories were over a decade away, although a conman named Mosena purported to start a brick company up but quickly skipped town.  The Square was dedicated that year, 1882, and the business district filled the south and west sides of it.  The downtown Table Rock that Henry made his way through probably looked a lot like this, a photo taken on Luzerne Street (south of the Square) circa 1880s: 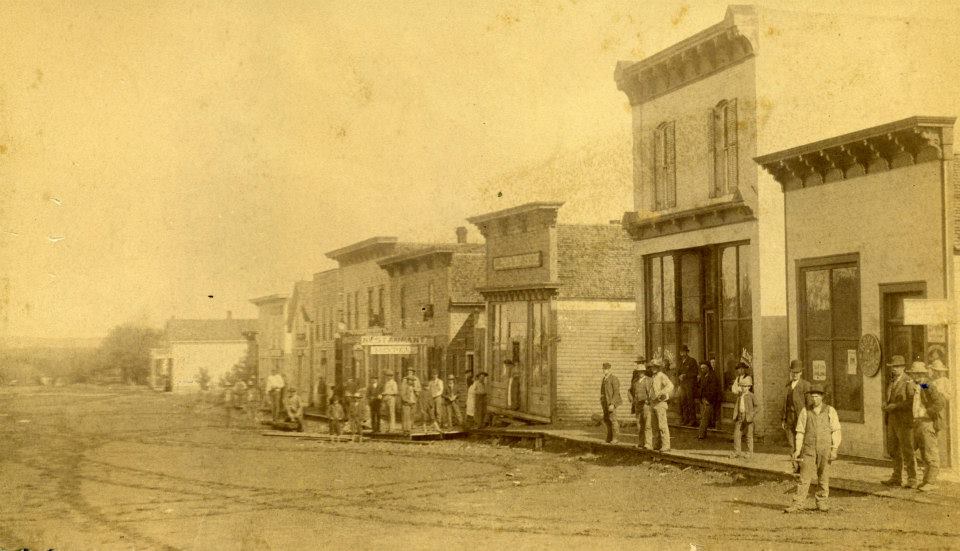 Henry had been a corporal in Company A of the 10th  Connecticut Infantry.  He served three years, going in on September 21, 1861.

On December 14, 1862, his unit engaged in battle. They had been sent to "disrupt" a railroad used by the Confederates:
It was there that Henry suffered an injury that would handicap him the rest of his life.  The mangled hand he would bear was caused by a gunshot wound, one which nearly took his life. Here is the story of it, recounted in his February 1927 obituary:

On December 14, 1862, ....a division of union soldiers was exposed to a withering cross-fire from the Confederates. Some were retreating but the 10th Connecticut stood fast and held their ground.

Three men in Corporal Merwin’s squad had fallen wounded when he was struck by a rebel bullet.  When he left for the front his stepmother had given him a miniature bible, which he carried under his belt buckle. He had just reached to his belt for another cartridge when a rifle ball struck his hand, cutting off two fingers, and then struck his belt buckle, penetrated the little bible, and glanced off through his clothing without entering his body.

To the little bible he carried,  Mr. Merwin always attributed the saving of his life.

Henry had met his wife Lucie while he was still a soldier. After he had recovered sufficiently from his wound, he was sent to New Haven, Connecticut where he was detailed to recruiting services. Miss Lucie Blakeslee became his bride on March 20, 1864.  They had two children, Fletcher and Mary.

the grand army of the republic - veterans gather

Henry met other Civil War veterans who had come to Table Rock. In 1883, the year after his arrival, they banded together to form Post 165 of the Grand Army of the Republic, which they named the John N. Gere post.  Lucie was part of the Woman's Relief Corps, the GAR's auxiliary.
Henry was a charter member.

His occupation was listed as merchant. He was 45 by this time.

There must have been much to share, with men from New York, Pennsylvania, Illinois, and other places come to West to homestead in the new state of Nebraska, formed in 1867.

Henry knew men like Allen Barnes, who fought at Vicksburg with the 114th Illinois, Peter Gold, who had fought with the 153rd Pennsylvania at Chancellorsville and Gettysburg, and Chauncey Norris of the 2nd Nebraska Cavalry, who had fought Indians on the frontier.

He knew Wilber Perry, a drummer with the 10th West Virginia, who had spent years as a prisoner of war at Libby Prison in Richmond, the 2nd most infamous of the Confederate camps.  He knew Edgar Wood of the 16th Wisconsin, shot in the face at the battle of Shiloh.

And he knew R. P. Jennings and Tom Shorter, two Confederates, apparently the only two to settle here, who were warmly welcomed by the Union veterans for their bravery in the war and good natures in their dealings with others.

Henry knew brave women, as well, who had kept the home fires burning.

He knew Dr. Mary B. Fox, a pioneer who came here right after the Civil War.  She was a war widow -- her husband Reynolds had died in Andersonville Prison, the most infamous of the Confederate camps. She came with two sisters who were also war widows, a brother who had lost a leg, and her parents.

Henry knew Margaret Kerns, whose son had died in the war, and to the time of her death said she had been proud to give his young life for the cause of freedom.

He knew Mary Fulton, who had grown up in Ohio with her husband Alpheus -- also a charter member the G.A.R.  Her obituary said that they had been "rocked in the same cradle" and had been a loving wife.

Table Rock Civil War veterans posted for a photo in 1887 but we don't know if he is in it or, if so, which one he is. You can see who his friends & neighbor were, though, some of the men who would have come into his story to buy goods and visit.
Take a close look at the 1887 photo 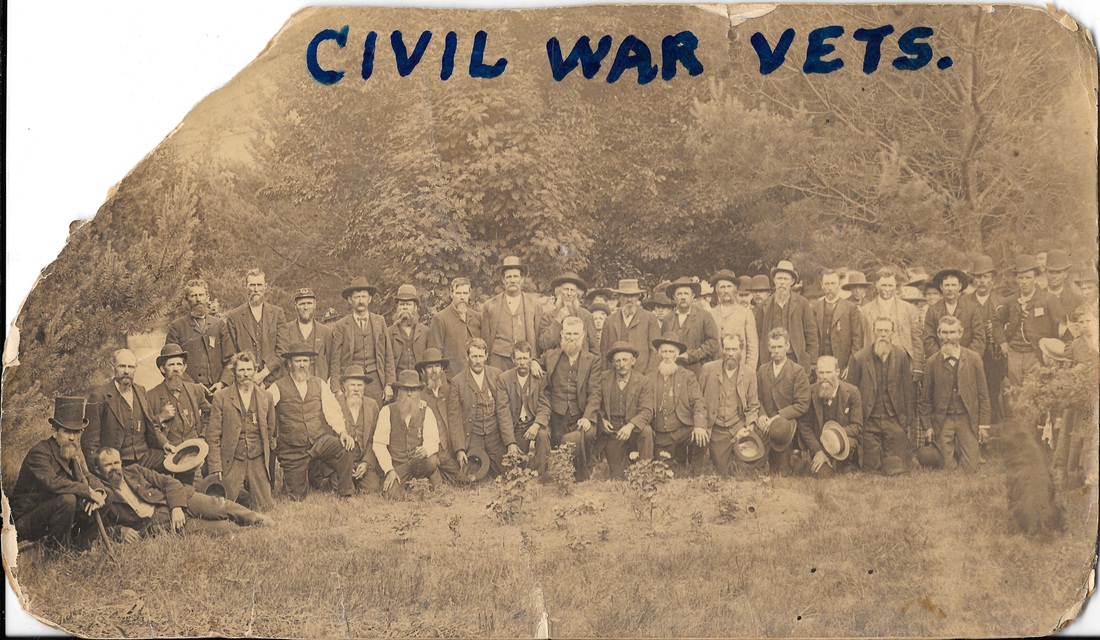 henry was a merchant

The GAR records note Henry as a "merchant."  Yes, indeed.  He sold medicine and hardware and more.

In the Spring of 1882, the firm of Matthewson and Allen advertised in the first available Argus edition that they were “Dealers in Drugs, Medicine, Hardware, and Agricultural Implements” and could be found “near the depot.”

By September 1882, the business had become Allen, Merwin, and Mathewson.

​Here is a December 1882 ad from the Table Rock Argus.  Allen, Merwin, and Mathewson were located on the south side of the  Square.   The business thus is in one of the buildings in the old Table  Rock photo above, but which? 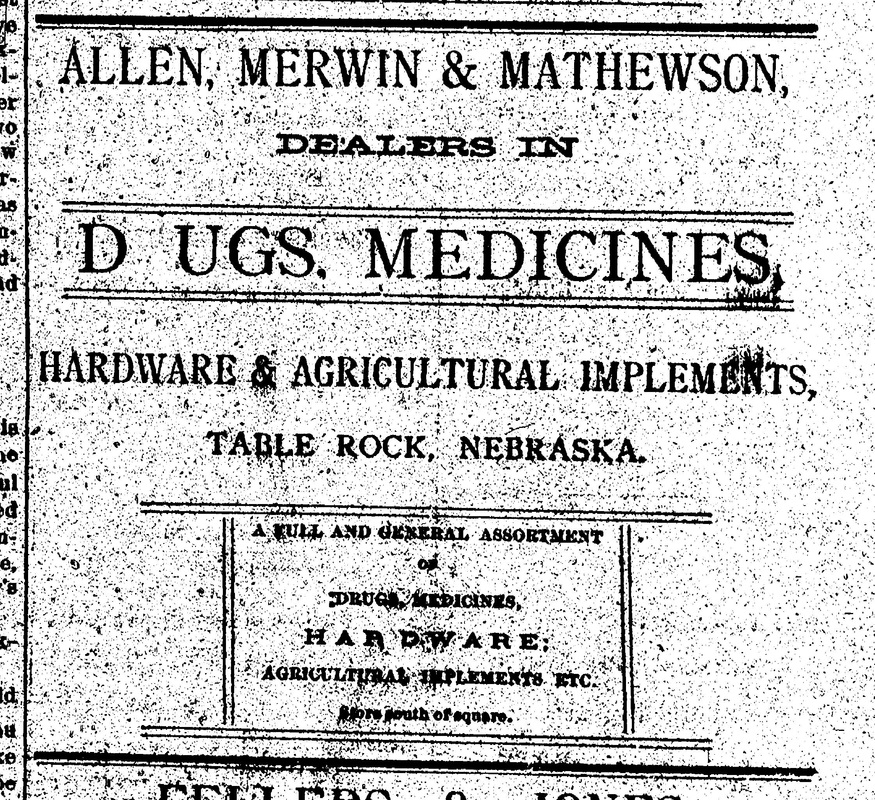 December 2, 1882 Table Rock Argus
Th
Henry left Table Rock, but we don't know when.  Allen, Merwin & Mathewson, dealers in drugs, hardware, agricutural implements, and etc., advertised in 1882 and 1883, but no editions of the Argus exist until 1890 and by then there were no mentions of Merwin.  Whether he left or simply was no longer in  business on his own or changed occupations is unknown at this time.   However, for his death to have been so newsworthy in Table Rock in 1927, he and his family must have been here for a substantial amount of time in some role in the community.

Toward the end of his years, his mangled hand developed complications, given the broad name of "catarrh," then a generic term of a bad inflammation.  He "suffered intensely" from it in his last years but bore his pain "stoically."

He is buried in Beaver City, Nebraska -- where his son was the newspaper editor.

Beaver City is now a town of about 600. It is on the Kansas line, about 200 miles due east of Table Rock.

Lucie, "his bride of the stirring war years," lies at his right hand.

we salute henry f. merwin, veteran of the civil war, and a man who walked the bustling board side walks of table rock of long ago.

he is worth remembering. 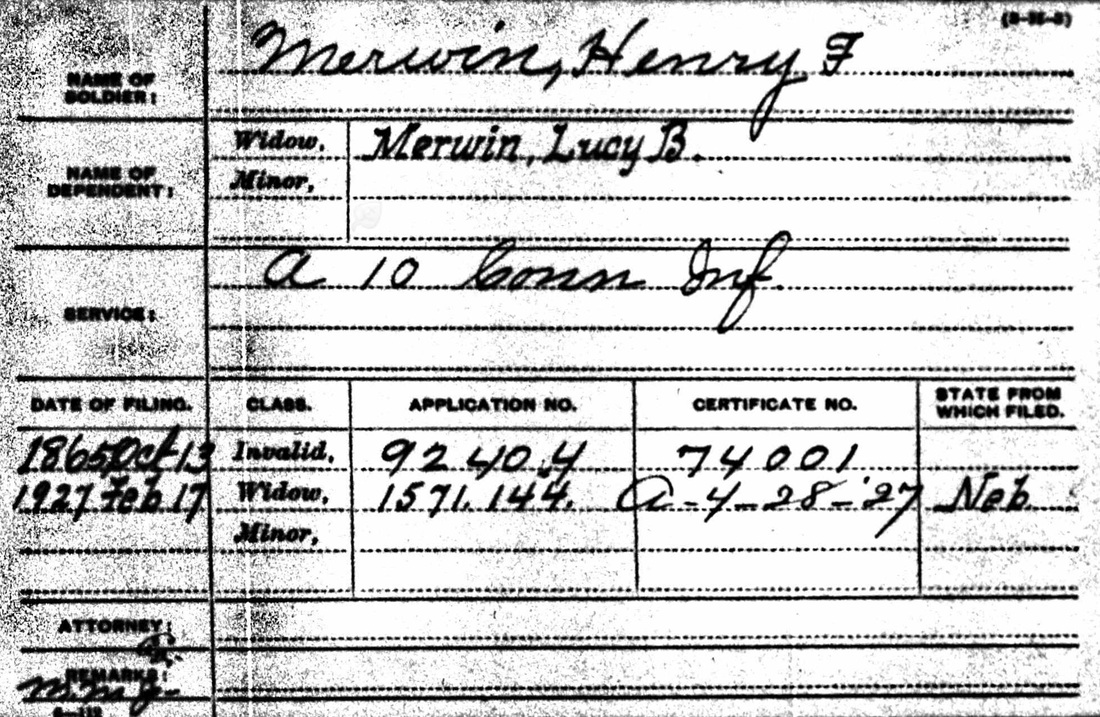 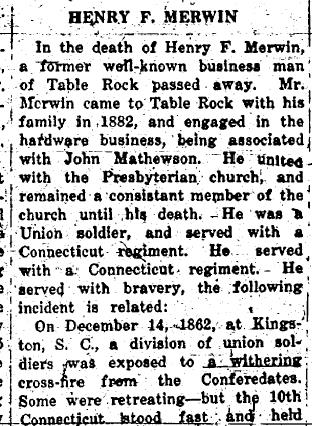 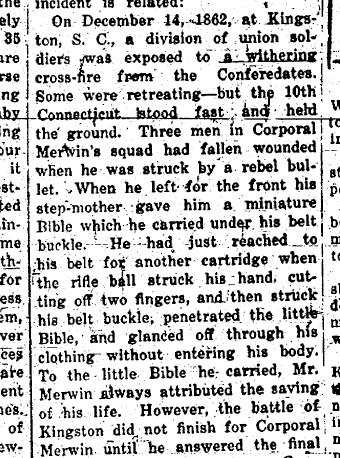 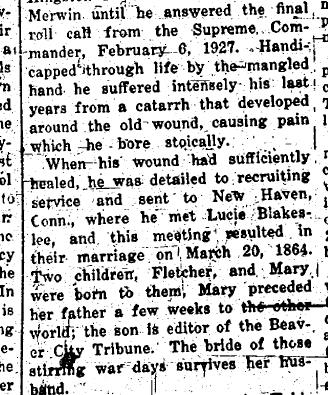 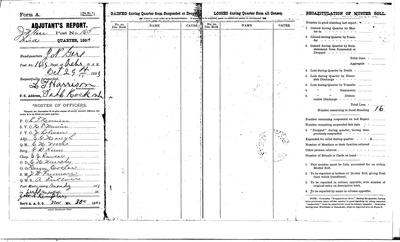 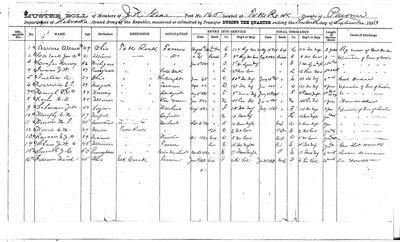