Just interesting
About our friends in other towns

We have a few Steinauer items scattered throughout the website, but here is a collection of just a few Steinauer things pulled at random during some rare spare moments. ﻿Our little sister town Steinauer has a rich history.  We have shared some of that in "recent" years, with consolidation of the schools, and with the 1968 shift of the Catholic parish.

From Kristin Quevedo comes these two post cards from Edna Tackley to Ora Spencer Booth, her fiance at the time, circa 1908-1909. They did get married, fortunately for Kristin who is their great granddaughter! 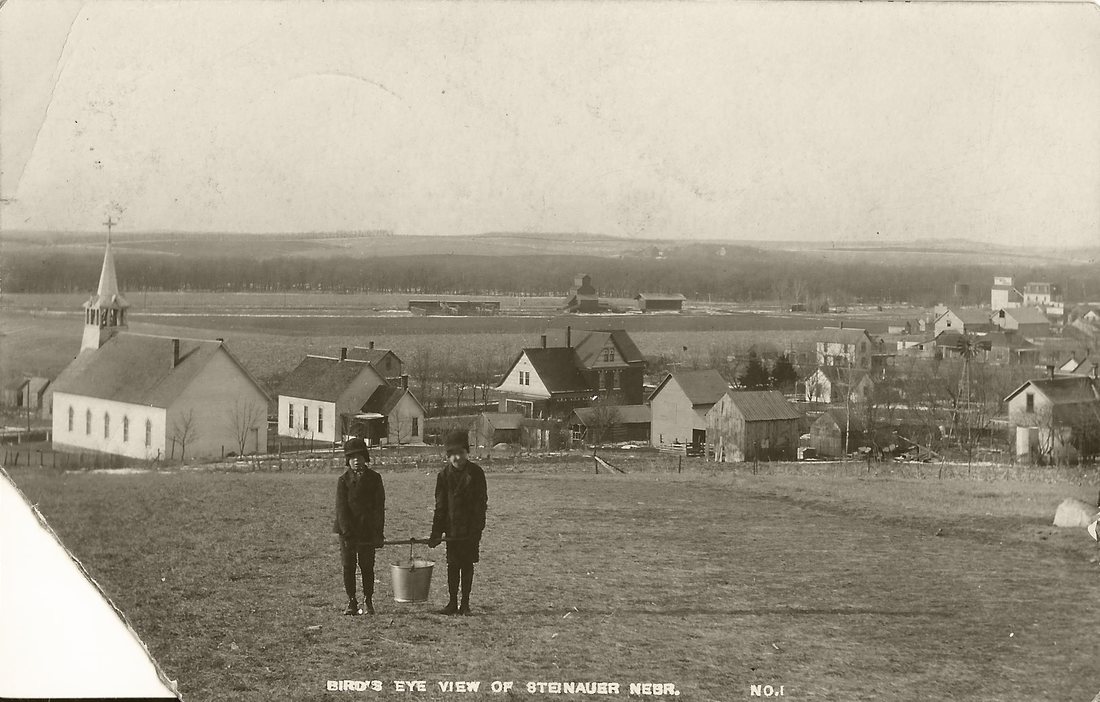 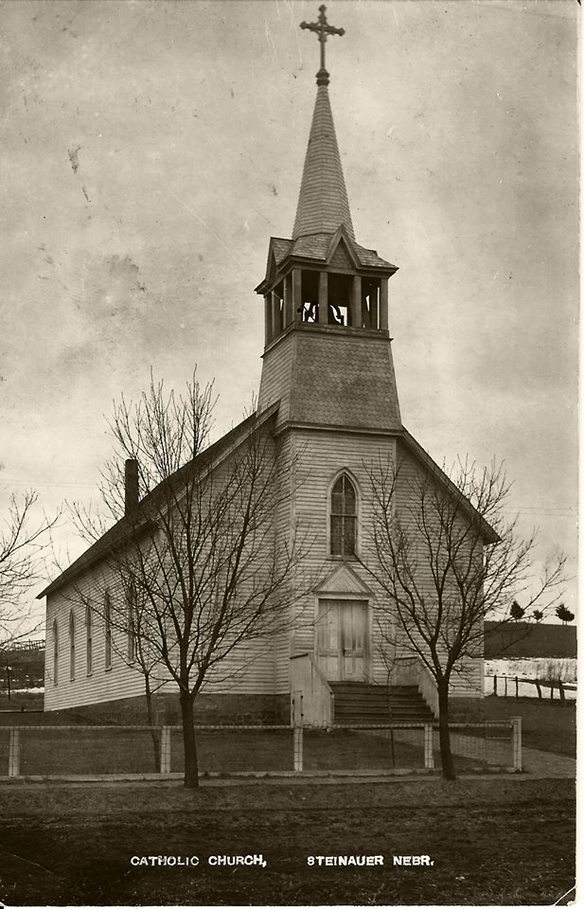 Photo 6408 - St. Anthony's Catholic Church, the frame church that preceded the present one of brick. 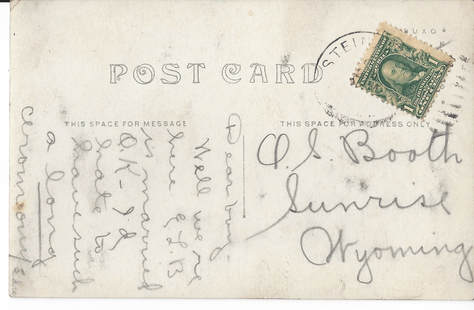 Back of the postcard, Photo 6408
The Heritage House has a beautiful enlargement of this photo.  Here is a copy from our own postcard of it. 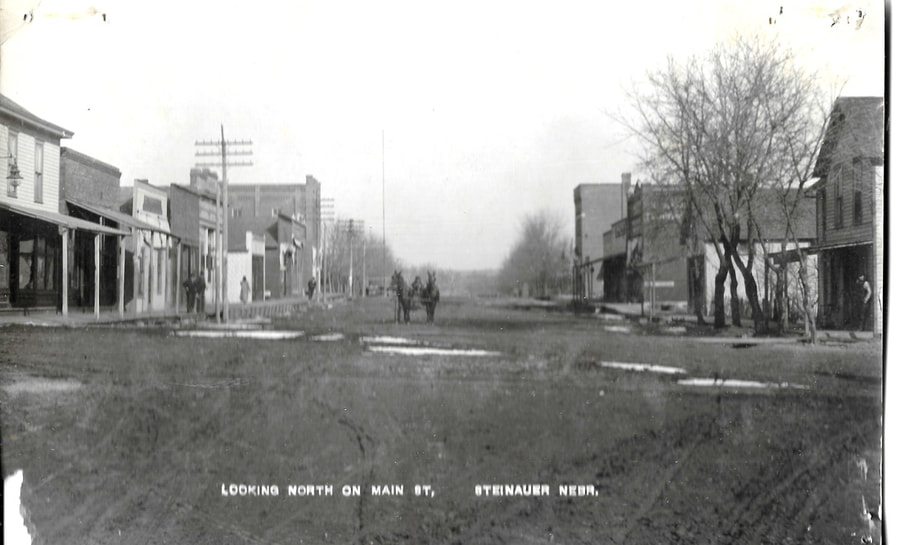 This is one of our early connections.  A picture of the Edmunds Band taken by photographer Archer King, then of Table Rock.  He was a fabulous photographer, and we hope to put together an exhibition of some of his unique photos some day, like this one. 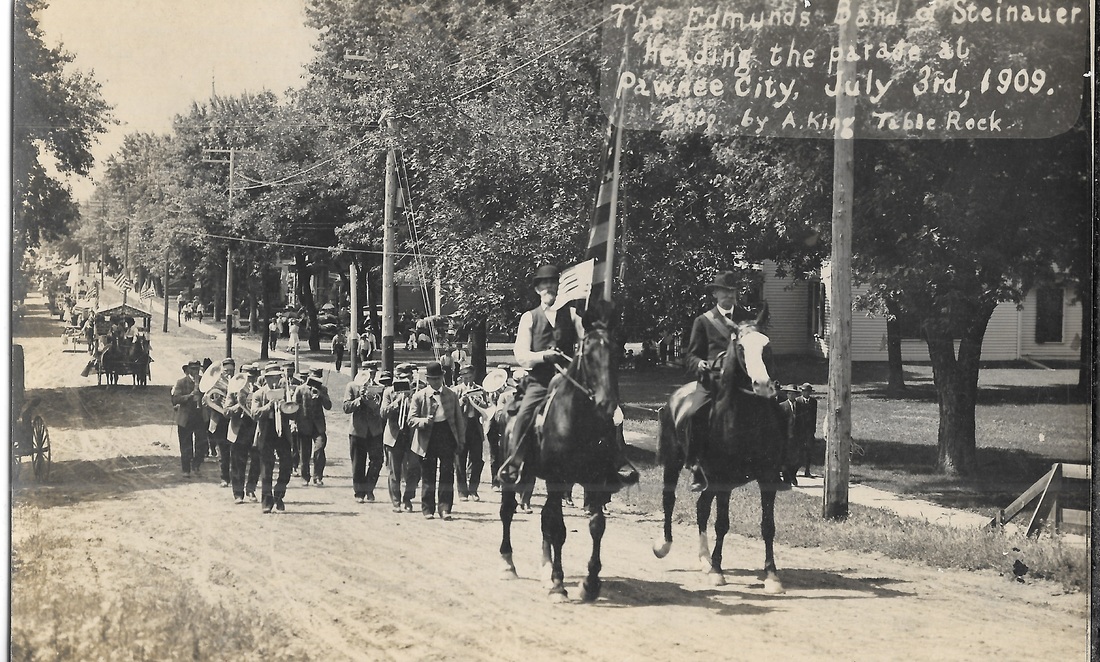 A number of Steinauer people died in the pandemic.  You can read about it in this article about the 1918 influenza in Pawnee County.
1918 Influenza Pandemic in Pawnee County

​in the news - sports 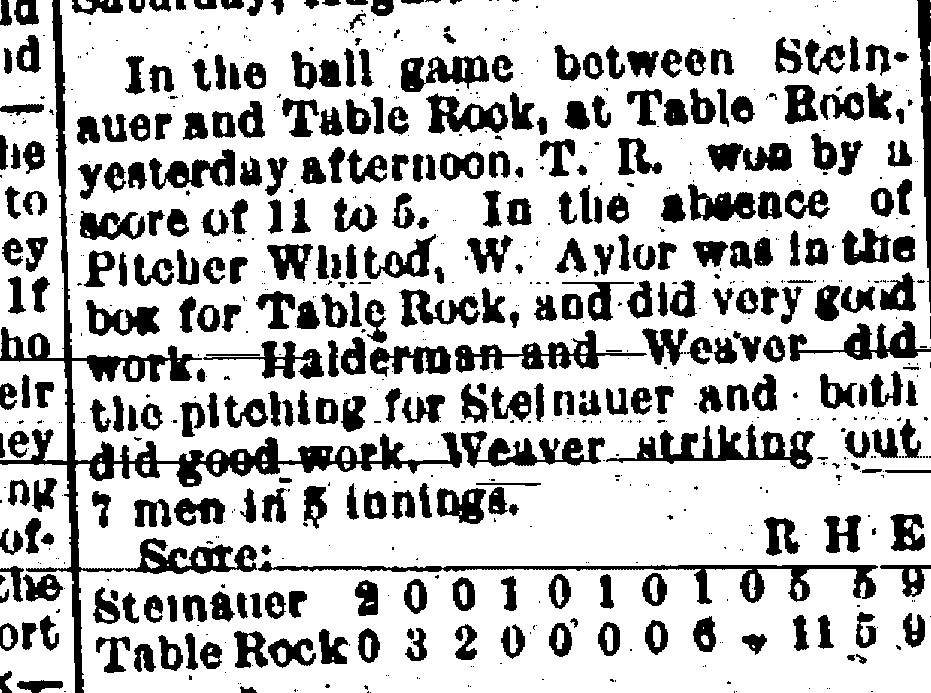 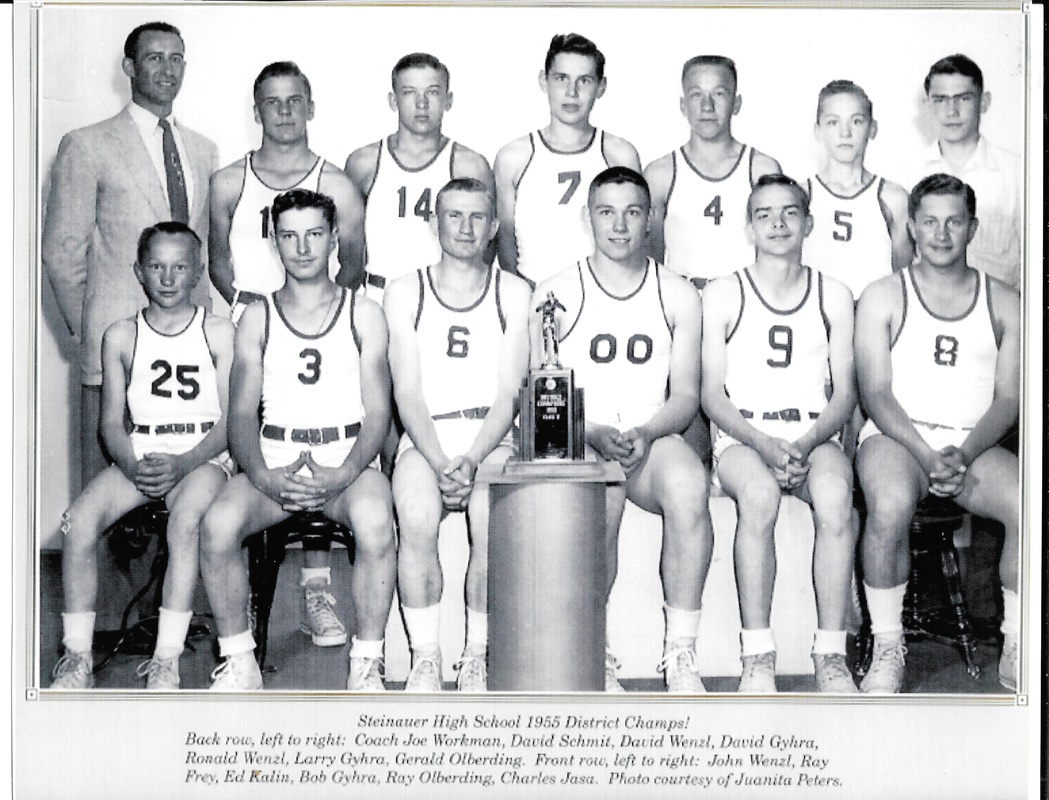 Thanks to Table Rock Historical Society member John Duder for this picture.

the "big" fire in table rock -- most of the businesses on the south side of the square were destroyed in a february 1920 fire.

Steinauer has a connection. One of the buildings was owned by Mary Chandler of Steinauer, a frame buildingoccupied by the Frank Sherman Barber Shop.

the steinauer-cold point social column in the table rock argus

This long-time column regularly reported the social events of our Steinauer neighbors. 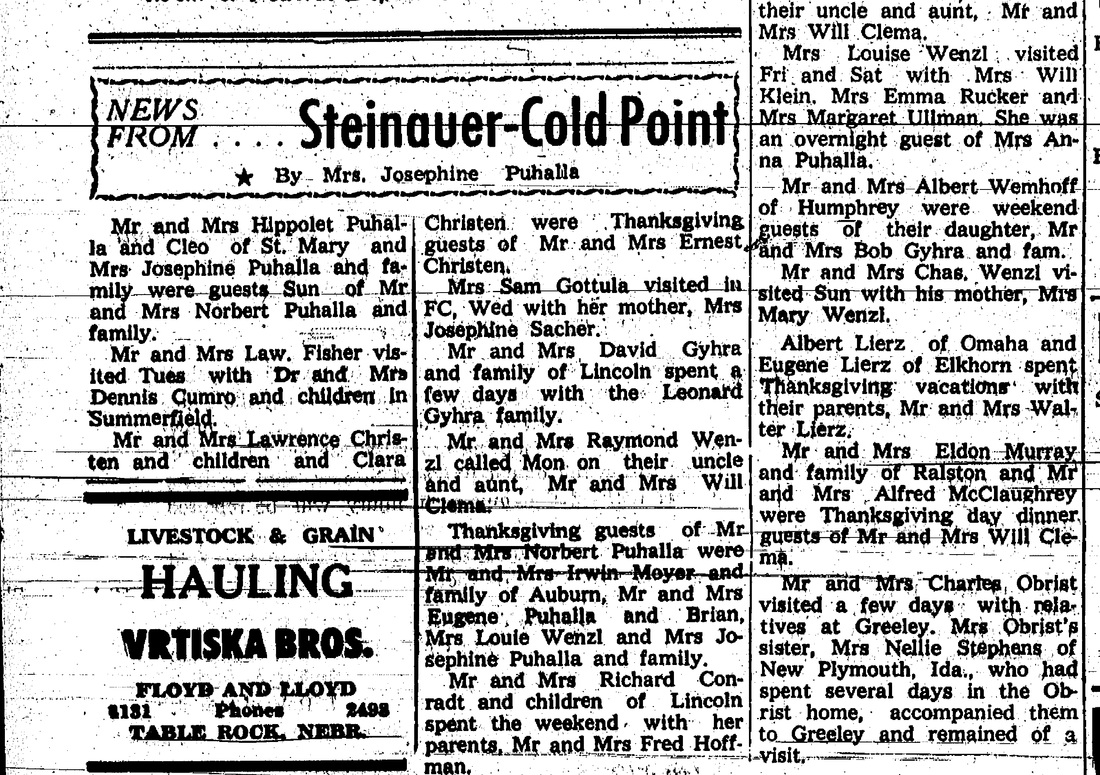 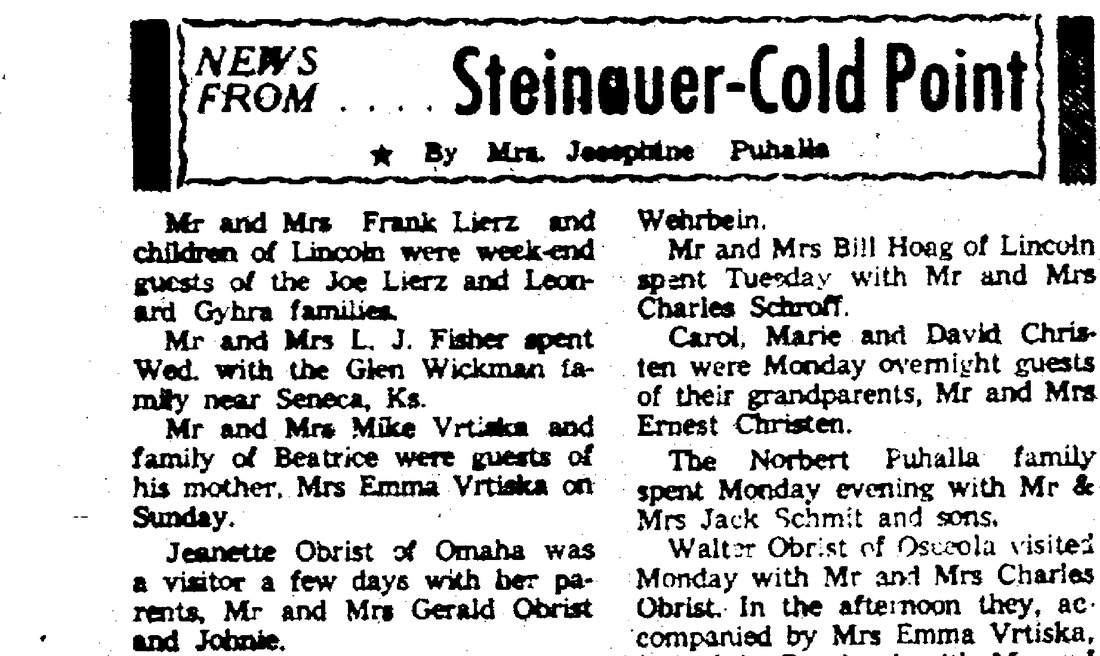 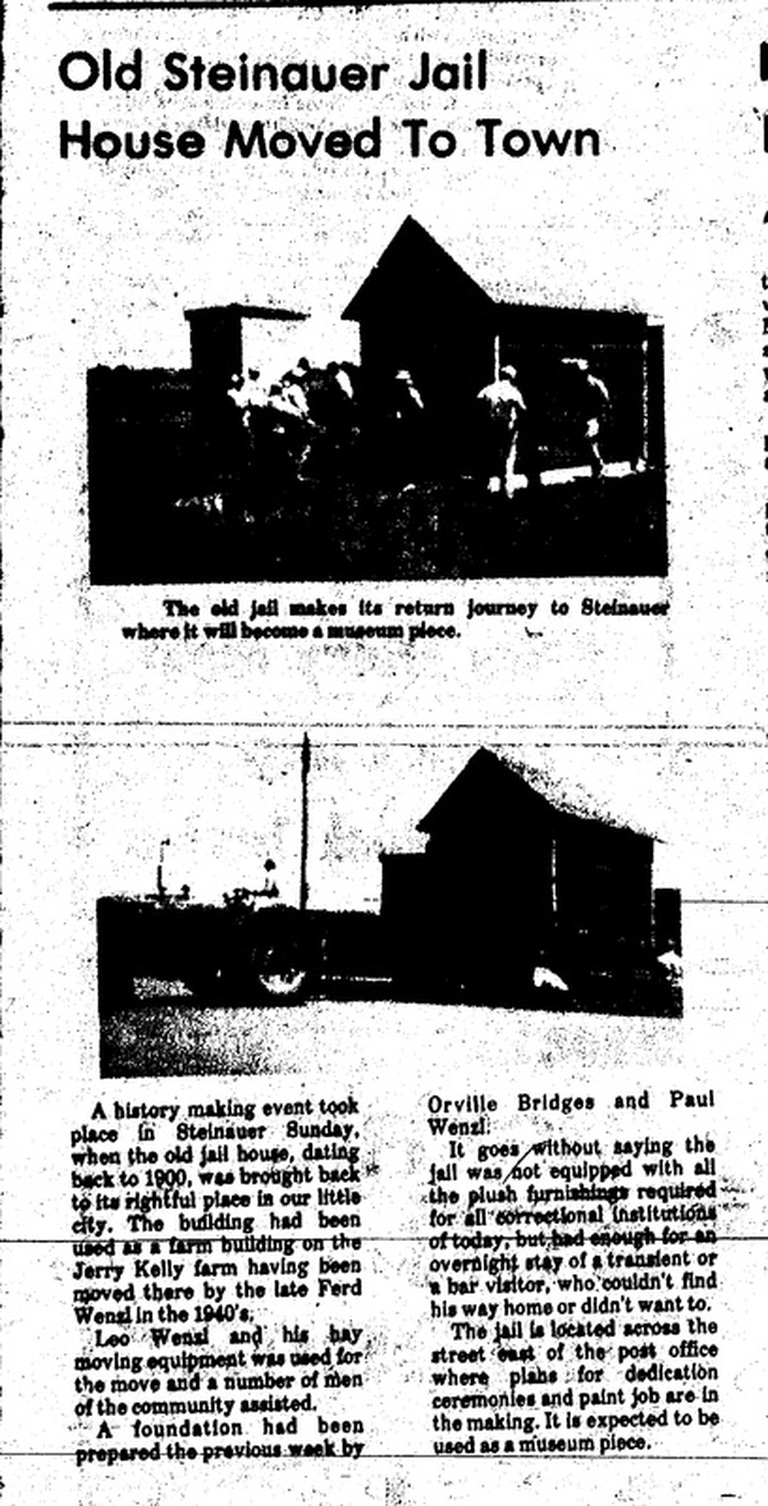 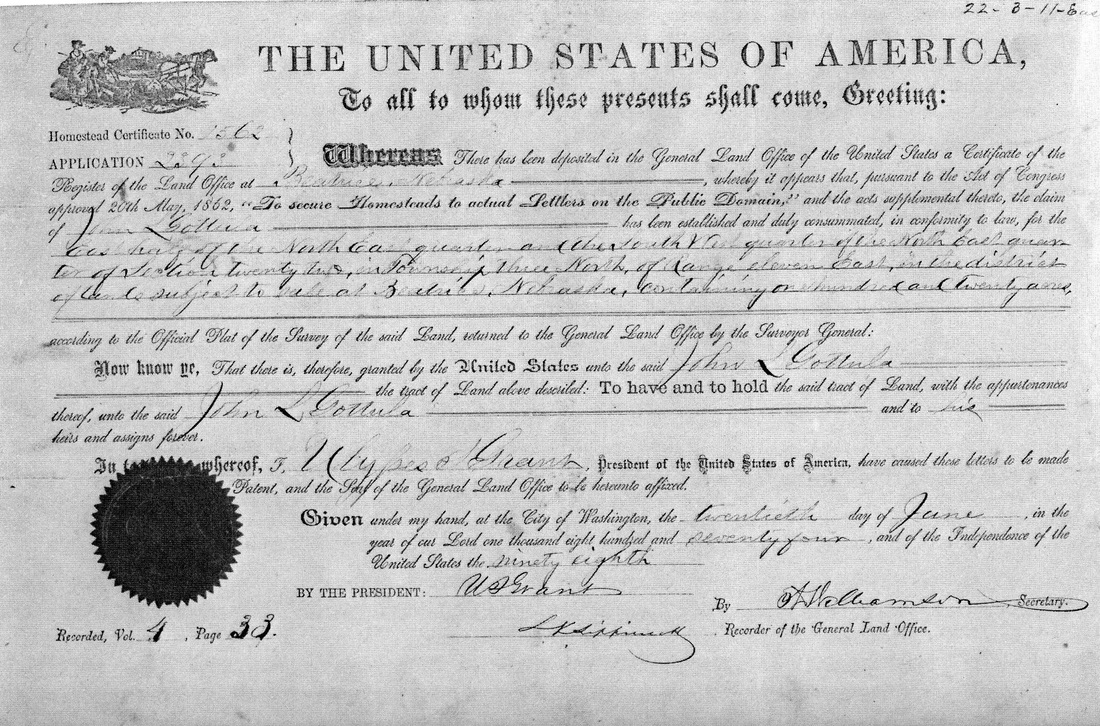 Thanks to descendant Russ Hunzeker for this digital copy. A picture of John Gottula & family is immediately below. 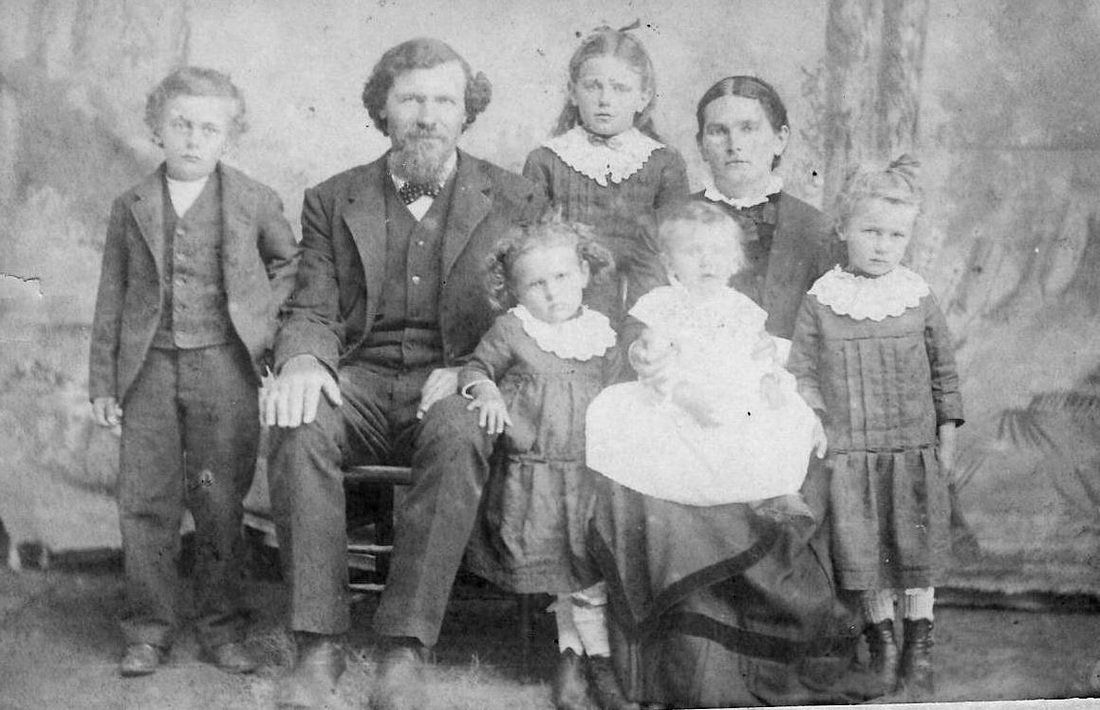 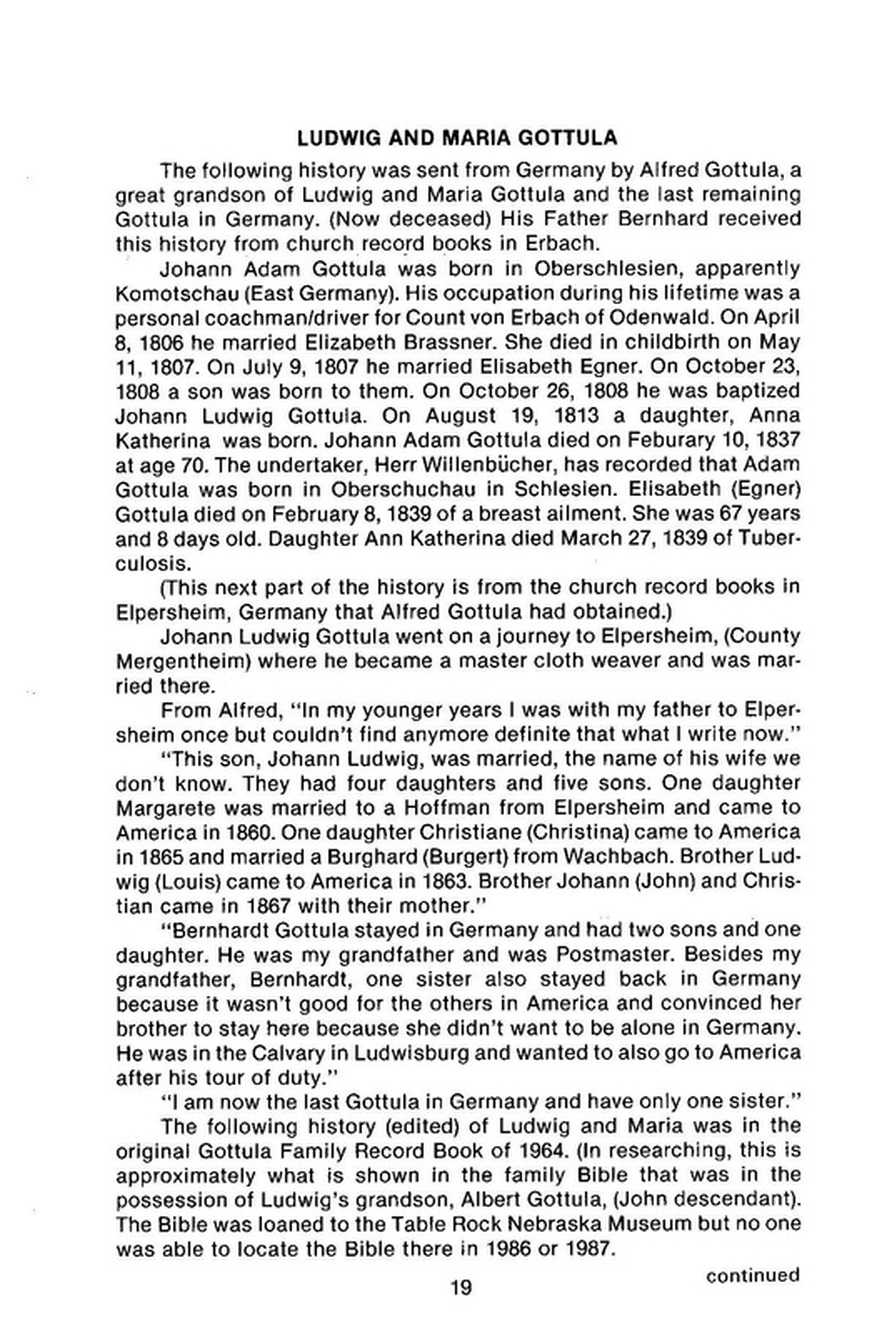 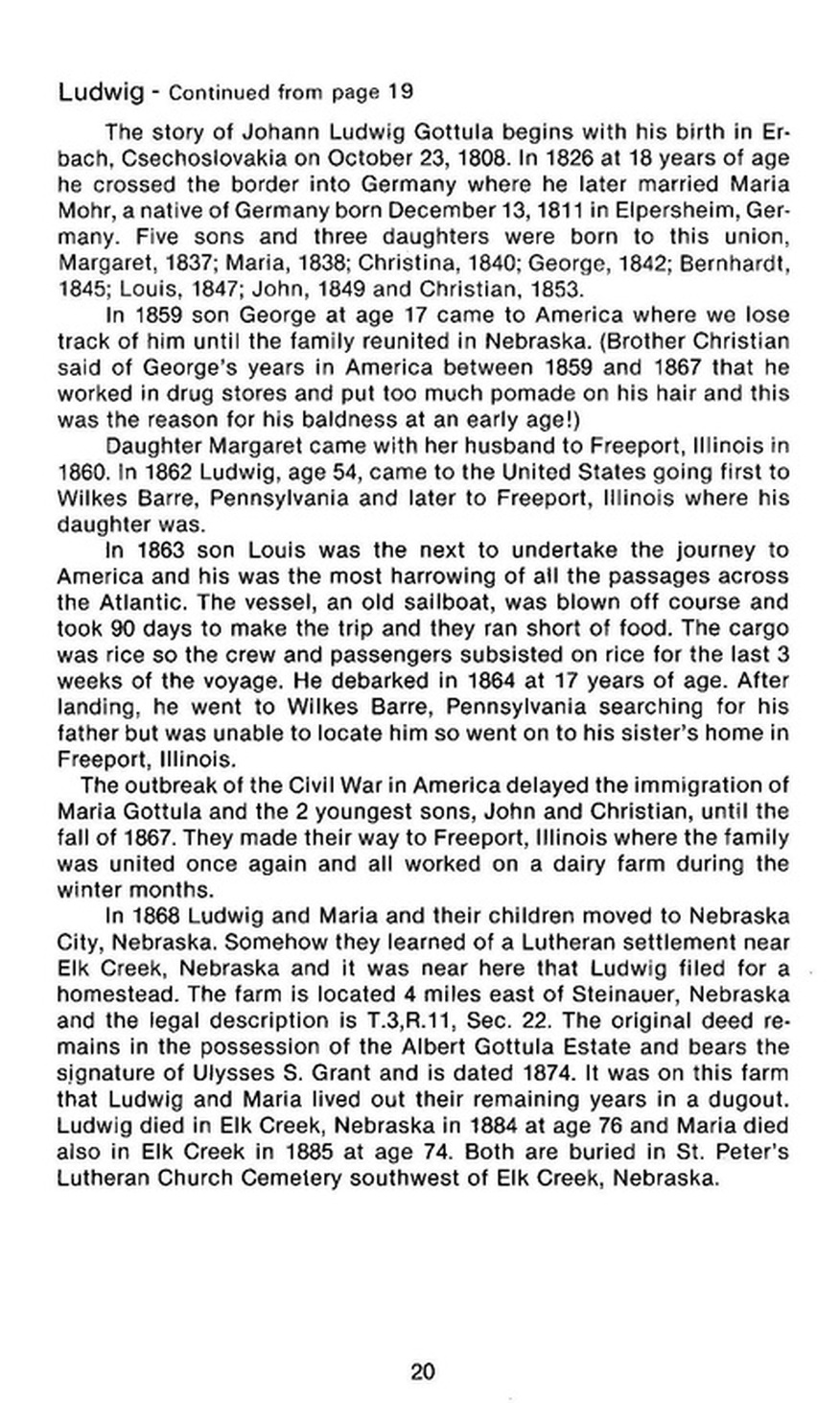 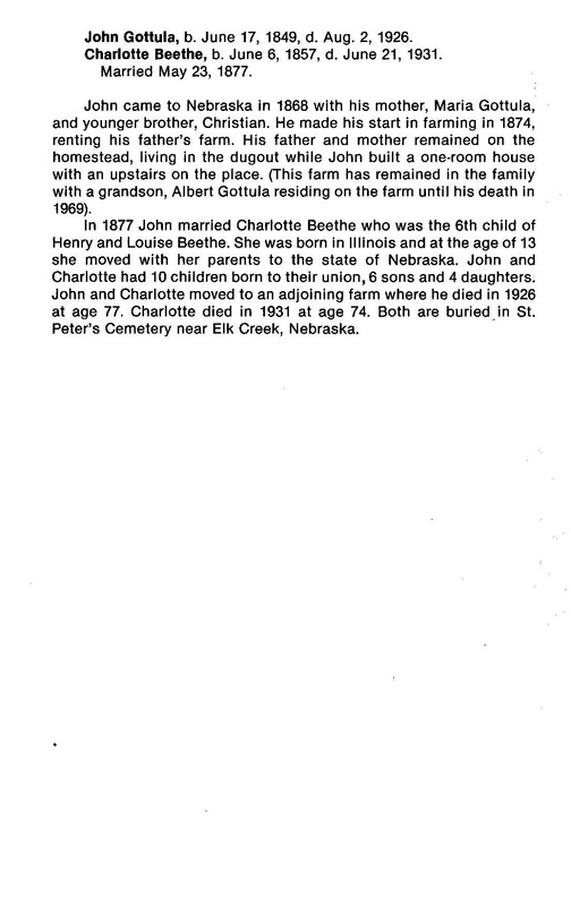 a story about the karl schultz family

In September 2018, William Steiner posted a story on the Historical Society's Facebook page.   It is a story told to him by his father, Arnold Steiner, who probably got it from HIS father, William "WJ" Steiner.  William Steiner of the Facebook group grew up about four miles north of Burchard.   The story of the Karl Schultz family took place near Table Rock's neighbor village of Steinauer.

Sometime prior to 1863, Karl Schultz and his wife, Elizabeth (Storand) Schultz, accompanied by two single men, the Slater Brothers, came to this community from Wisconsin. All of them had come from the Old Country together. Mr. Schultz had operated a brewery while they were in Wisconsin, the product being called Schultz beer.

Karl and the Slater Brothers put up a cabin two miles northwest of Steinauer. The Slater Brothers soon moved farther north into Johnson County but Karl and Elizabeth stayed.  They had six children during their occupancy of that log cabin and decided they needed a larger house. This house was built close to the log cabin.

The oldest daughter and son of the Schultz family had a double wedding; Anna marrying Frank Blecha and Jacob marrying Mary Blecha.

Charles and Jenny Vanek Schultz eventually took over the homestead, and their children took over from them when the time came. The present occupants are Carl Schultz and Frank Schulz and Frank's wife Lauretta.

There is a little more to Karl Scbultz's story, and it took place on a summer day, July 30, 1894.  As William Steiner recounts from a story told him by his father:

As the story goes, Abbott had accused Schultz of stealing some hedge fence posts. Abbott went to Pawnee City to get deputized.

While on the way back home from Pawnee, Abbott going north on the road from Salem's church met Schultz, who was traveling with his boys, going south on the same road. Schultz was shot but the boys escaped and hid in a neighbor's barn.  Schult was taken to Steinauer, where he succumbed to his wounds.

Schultz's wife when called to Steinauer stated, "When he was sober he was the best of men and when he was drunk he was the worst of men."

The Abbotts shortly moved away from the community.

This was a story recounted by my father when he was still alive. Yes, there is history in Pawnee County.

Karl  Schultz was born in Bavaria in 1838 and died in Nebraska in the middle of the terrible Great Nebraska Drought of 1894. He was buried in the cemetery of St. Anthony's Catholic Church.  His wife Elizabeth lived to old age; she died in 1925 at the age of 24, and is buried in the cemetery of Salem Church.  Karl's children Anna, Jacob, Frank, Charles, John, and Joseph (born between 1865 an 1875) each lived to be at least 69 (Jacob) and as old as 91 (Frank).  But Karl died at age 55. 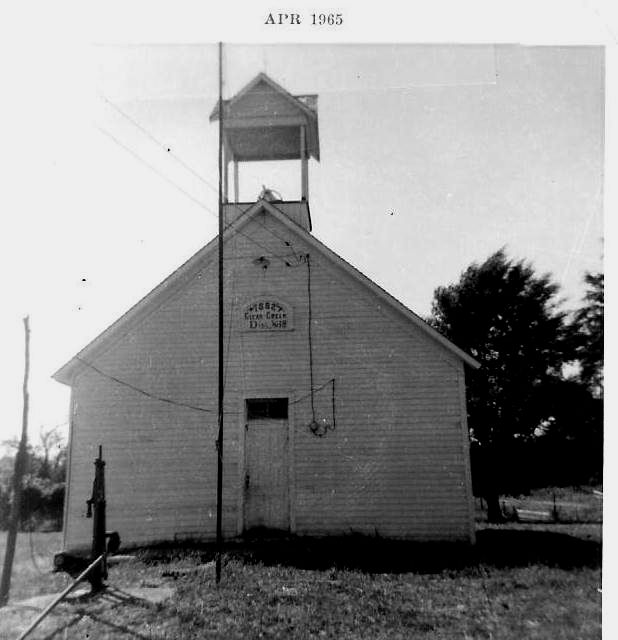