glen wilcox's story
On the island of bougainville in the south pacific, his unit was hit by large artillery fire with no where to go. "he jumped into a barrel, with one leg and foot exposed. both were hit by gunfire." 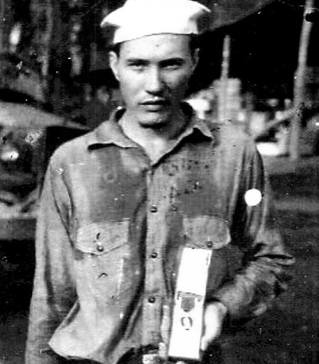 ​Glenn Wilcox was the son of Goldwin & Rose Wilcox.

Here he is in a picture on the Wall of Honor at the Veterans Museum.  He’s sweating profusely, which means he's probably in the South Pacific, where he was stationed.  And he’s holding a Purple Heart.  Here’s the story as recited in a booklet at the museum entitled, “World War II Veterans, Table Rock, Nebraska,” editor and date not stated.

When Glenn joined the Navy, his division was a non-combat back-up unit for the fleet in the South Pacific.  They moved from island to island and transported supplies by smaller craft to the fleet.  Glenn was an Aviation  Metalsmith First Class who performed repairs on Navy and Marine Aircraft.
​
Glen was first stationed on Guadalcanal and from there was sent to several other small islands.

The last island he was on was Bougainville, which is near the Equator.  It is in the North Solomon Islands.  It was jungled and mountainous.  It was 50 miles wide and 500 miles long with a large volcano at one end.  The volcano, 564 feet high, was undermined with tunnels and rooms and the entries were camouflaged.

Unbeknownst to Glenn’s supply division, the Japanese were holed up in the volcano.  Their large guns (number 5 shells) could reach the area of the island where Glenn and rest of the crew were unloading supplies.  Glenn reported: "One day all hell broke loose.” The Japanese guns took them by surprise, injuring and killing the men.  They did not have much cover because if you dug a foxhole it would immediately fill with water.

Glen found two barrels welded together and jumped in head first. One leg and foot were exposed.  Both were hit by gunfire.

Glenn was crippled but able to help get others to safety.  Their island aid station (or hospital) was only a low place in a swamp, covered with tarp.

From the island, the wounded were taken on a hospital ship to Pearl Harbor. There Glenn received a “wooden sandal” and was given the nickname “Pegly Pete.”

Although he wore the foot brace for almost a year he was still able to continue his duties.  From Pearl Harbor, he was sent to San Francisco where met up with his brothers Don and Ray as well as Walter Alderman from Table Rock, Nebraska.  They were all returning from several months of combat on aircraft carriers.  Glenn was given his first leave since joining, because he had been no leave after boot camp.

Glenn was next sent to Oklahoma for some training with rubberized equipment for the Navy. After a year and another leave, he returned to the Great Lakes Naval Station where he was discharged. The Japanese had surrendered.

Glenn  was born in 1921. He graduated from Table Rock with the Clawass of 1939. While in the Navy, he was awarded the Purple Heart Medal, Asiatic Pacific Ribbon 1 Star, Good Conduct Medal, and the American Ribbon and Victory Medal.   He married Betty Smith in 1946.  He was a postal carrier for 30 years. He died 2016.

It turns out that Mark is correct.  According to TaskAndPurpose.com's biography of Medal of Honor Winner Pappy Boyington, "On Oct. 17, 1943, in the skies over Papua New Guinea’s Bougainville Island, Boyington led a formation of 24 Vought F4U Corsairs over a Japanese airfield where 60 planes were grounded. The Black Sheep circled overhead, daring the enemy to come up and fight them, and in the ensuing battle, the Marine pilots downed 20 enemy aircraft. Not one of their own planes was shot down. By the war’s end, Boyington alone had destroyed 28 enemy planes."   We don't know when Glenn was on the island.  Since he said they did not know the Japanese were holed up in the volcano, maybe the incident when he was wounded occurred early in the American occupation of the island and maybe at a time when Pappy Boyington came to help in October 1943.  We don't know.  But it's fun to contemplate a Table Rock fellow in such a historical context!
View My Stats