Marvin was a Navy man during World War II. 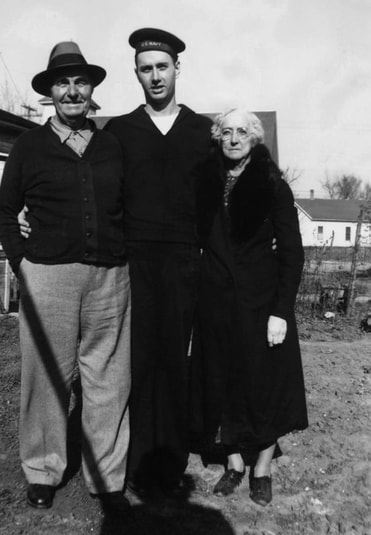 a long way from table rock 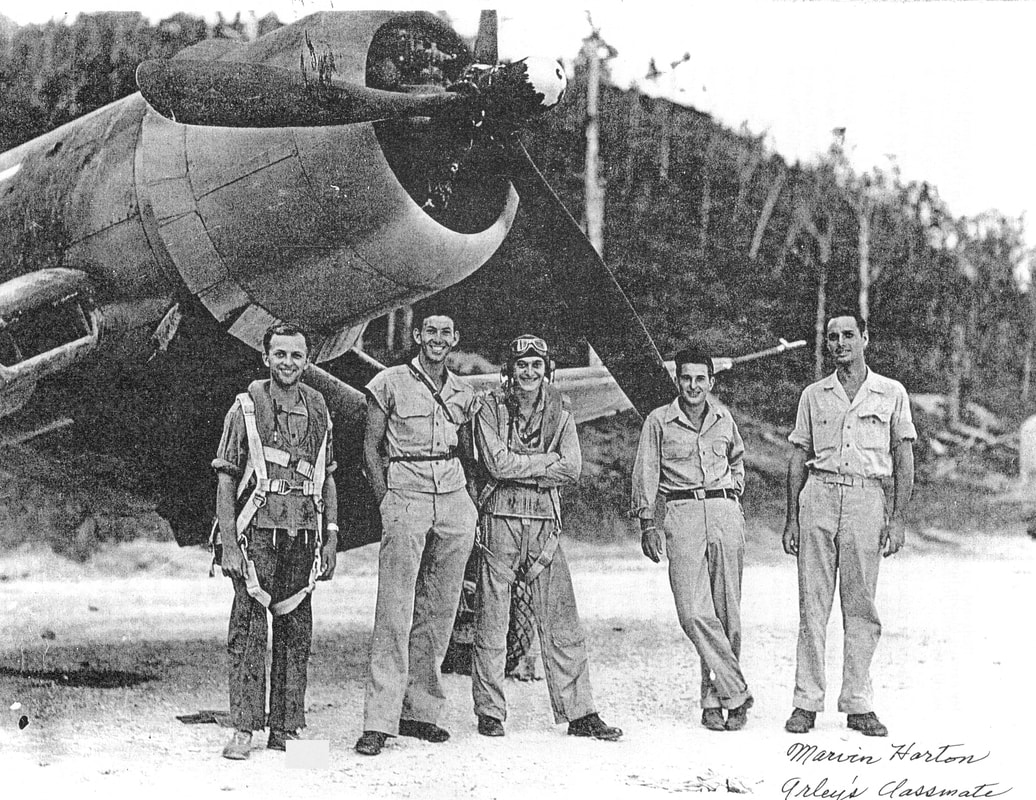 ​marvin's service in the solomon islands - new georgia, then bougainville

You can see the New Georgia Islands about half way down the map, on the left. Bouganville is the large island to the left. 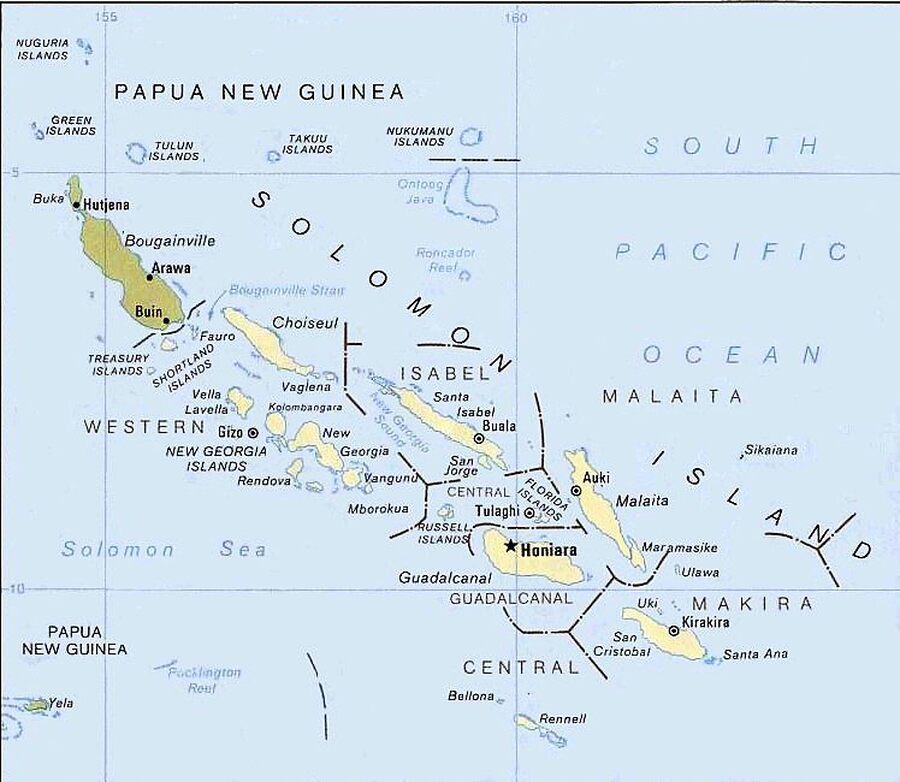 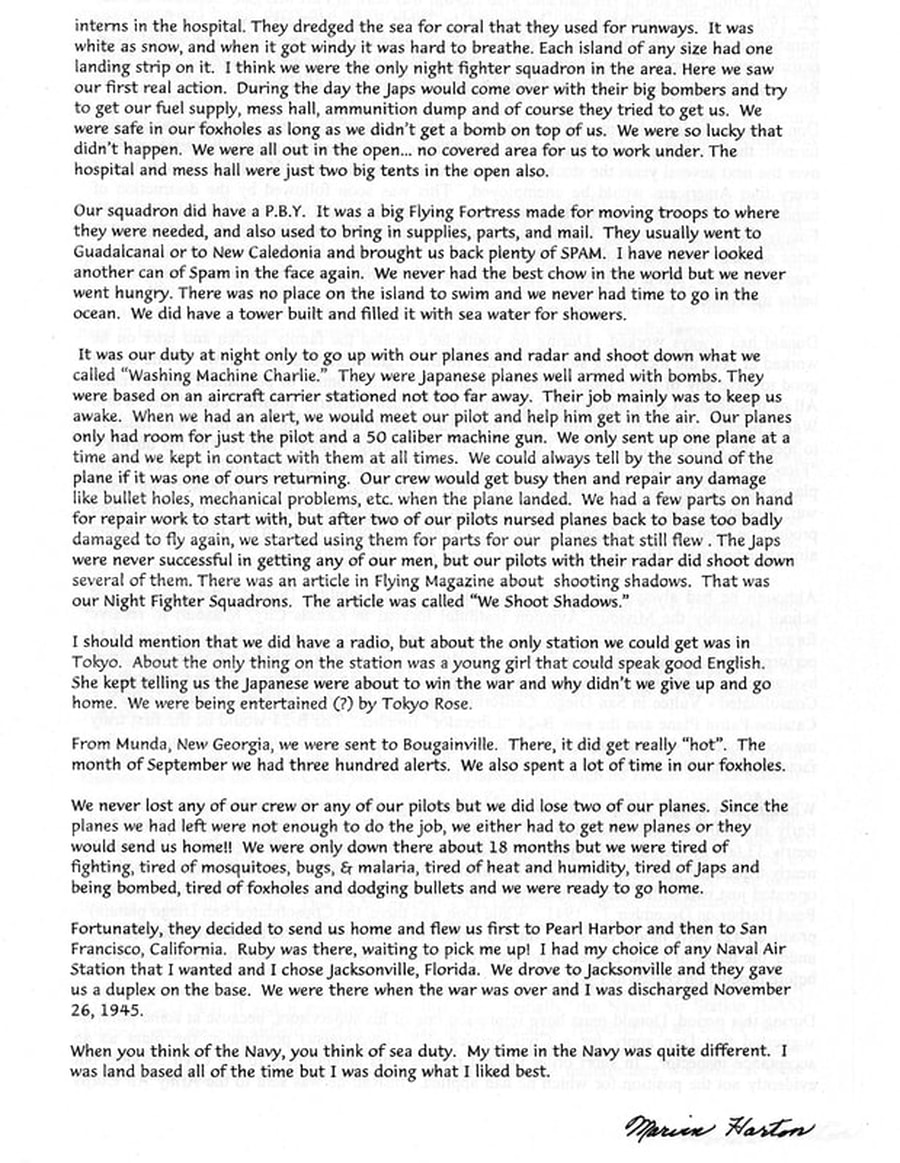 When a veteran of the Bougainville campaign, Peter Medcalf, sat down in the early 1980s to write his memoir of the campaign, he came up with the title War in the Shadows. It was a statement both on the type of fighting experienced on the island – jungle warfare in the shadowy half-light under dense jungle canopies – and the sense those taking part had of being ‘forgotten’.

Bougainville Island and the adjacent, smaller Buka Island form part of the Solomon Islands chain. They were the outermost islands of the Australian mandated territory of New Guinea. The Japanese invaded the two islands in early 1942 when fewer than 20 Australian troops and a couple of naval coastwatchers were stationed there. The soldiers withdrew inland to observe the enemy and later were evacuated, leaving the coastwatchers to continue reporting Japanese air and sea movements. Their radio messages warning of convoys and air raids helped the Americans achieve victory to the south-east at Guadalcanal. This battle was the start of the American ‘island hopping’ campaign recapturing a string of islands from the Japanese.

In November 1943, American forces landed at Torokina on the western side of Bougainville Island. Along with some New Zealand and Fijian troops, they established and defended a base there. The Americans intended only to secure this base, building airfields and supply depots, to support subsequent operations beyond the island. They were content to leave most of Bougainville and all of Buka Island in Japanese hands.

Allied air and sea superiority meant that the Japanese garrison, the 17th Army, effectively was cut off from the main Japanese forces. The Japanese could not get supplies in and had no air cover. Without resupply, they could not mount an effective attack on the American base at Torokina. Only once, in early 1944, was a major attack on the base launched. It failed. After that, Bougainville became a backwater of the war.

PRIOR TO THE MILITARY -- MECHANIC AT KARAS GARAGE IN TABLE ROCK 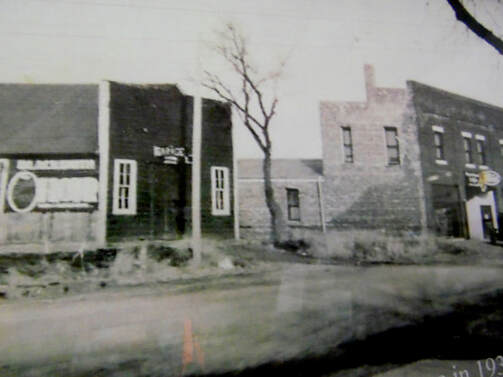 In the background, the Karas Garage in the 1930s, in the background. The mechanic work was done in the one-story extension in the back.
According to his 1942 Personnel Qualifications Card immediately below, Marvin Horton  had graduated from high school in 1934; he had done two years of varsity football, and two years of track.  After graduation, he worked to the end of the year with the C.C. C. --- the Civilian Conservative Corps, a New Deal entity; there he was engaged in "forrestry, dams."  It is difficult to interpret when, but he then worked at the Karas Garage in Table Rock. He was a mechanic, and his duties included engine repair and replacement and fender welding.  At some point, he worked as a "gas plant operator," location not stated. His duties there included working with "generator producing acetylene gas, poured in calcium carbide crystals, added water, started activator, filled steel cannisters." 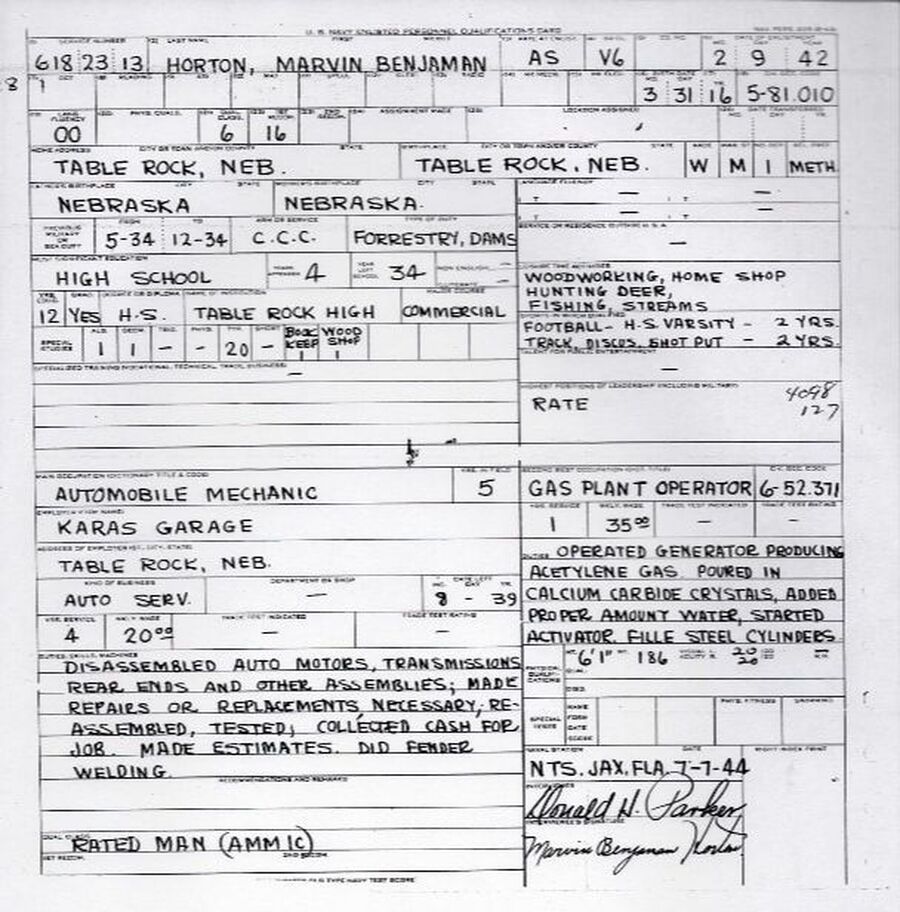 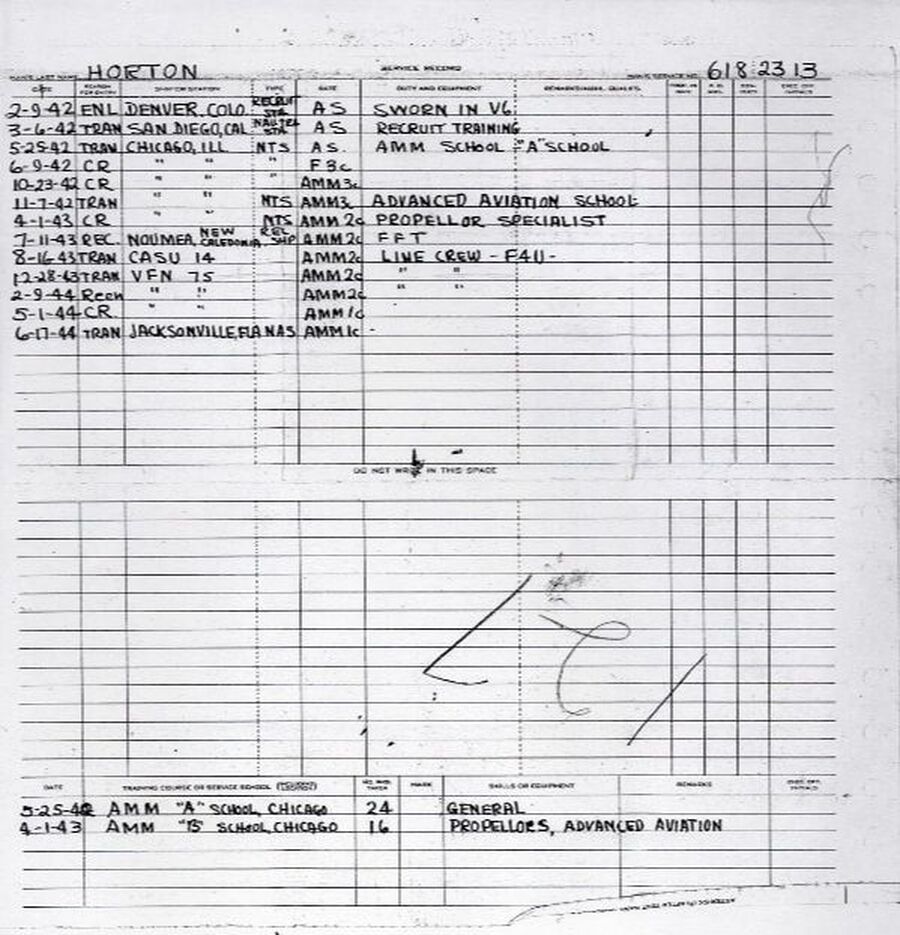 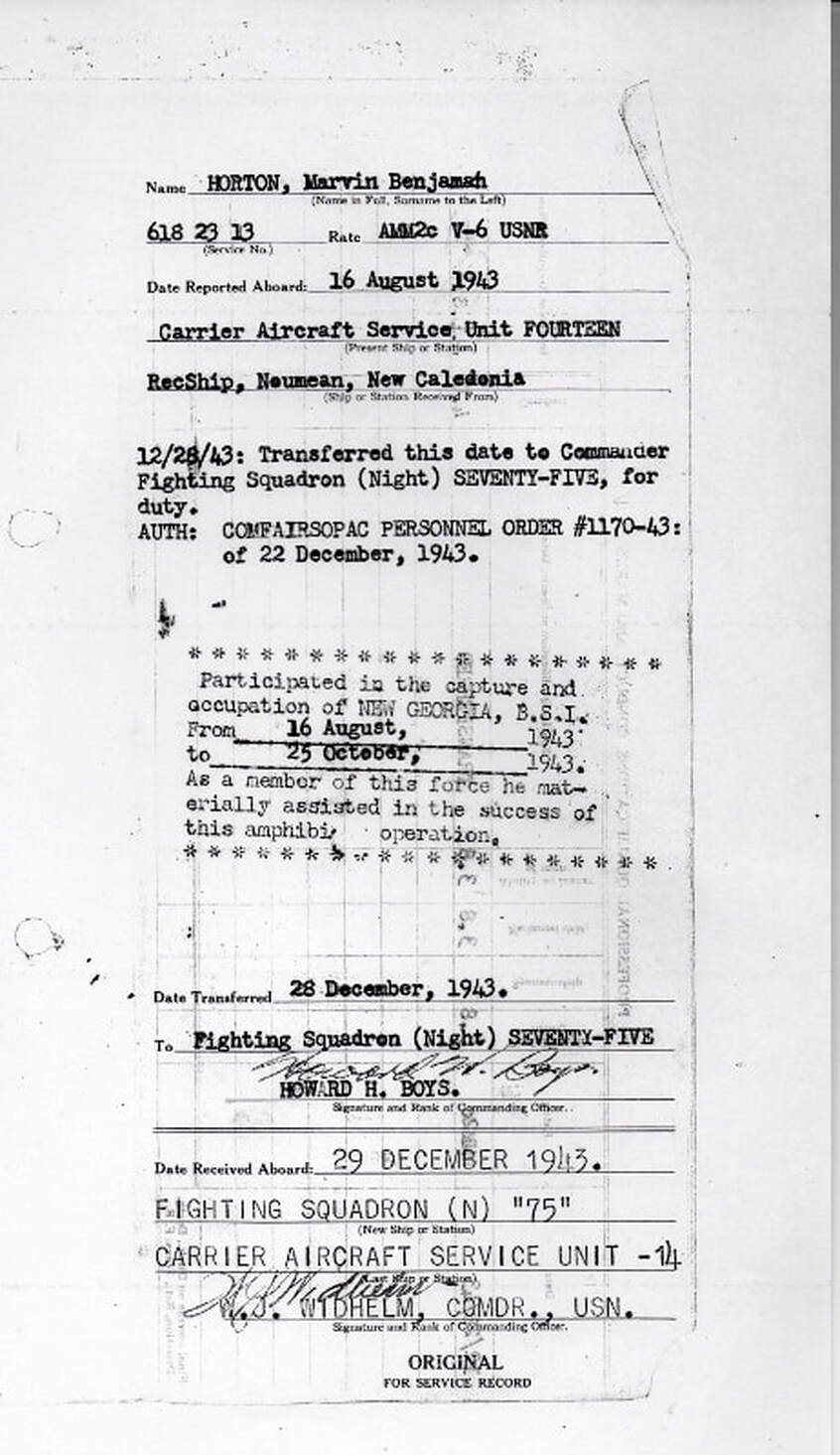 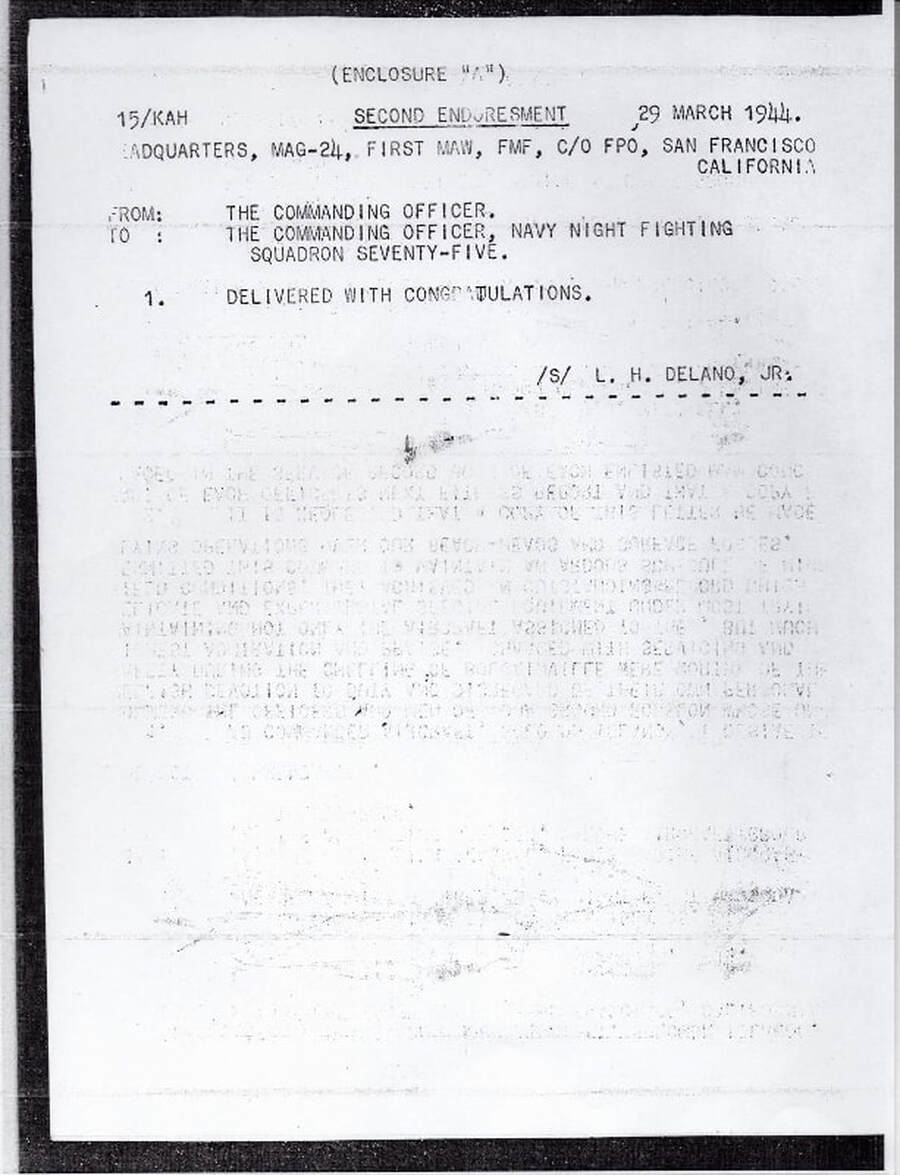 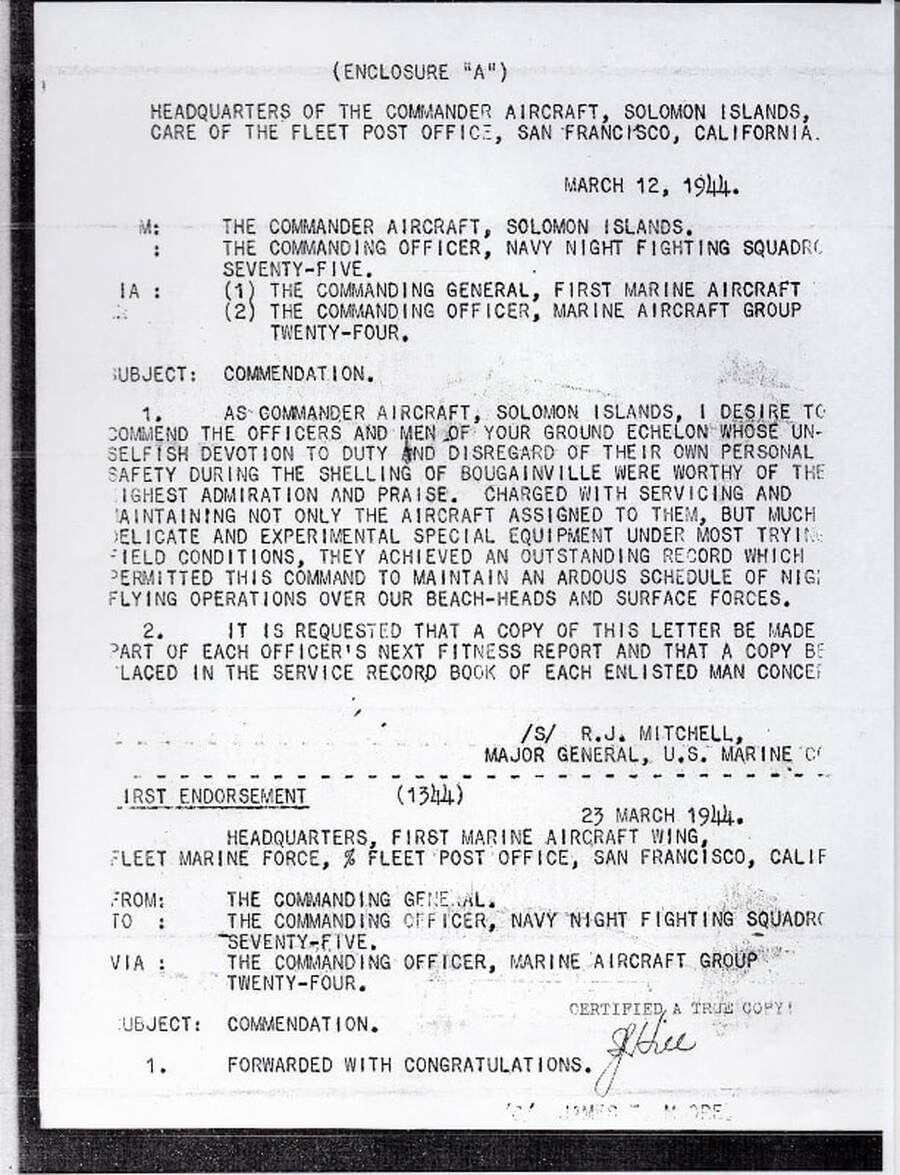 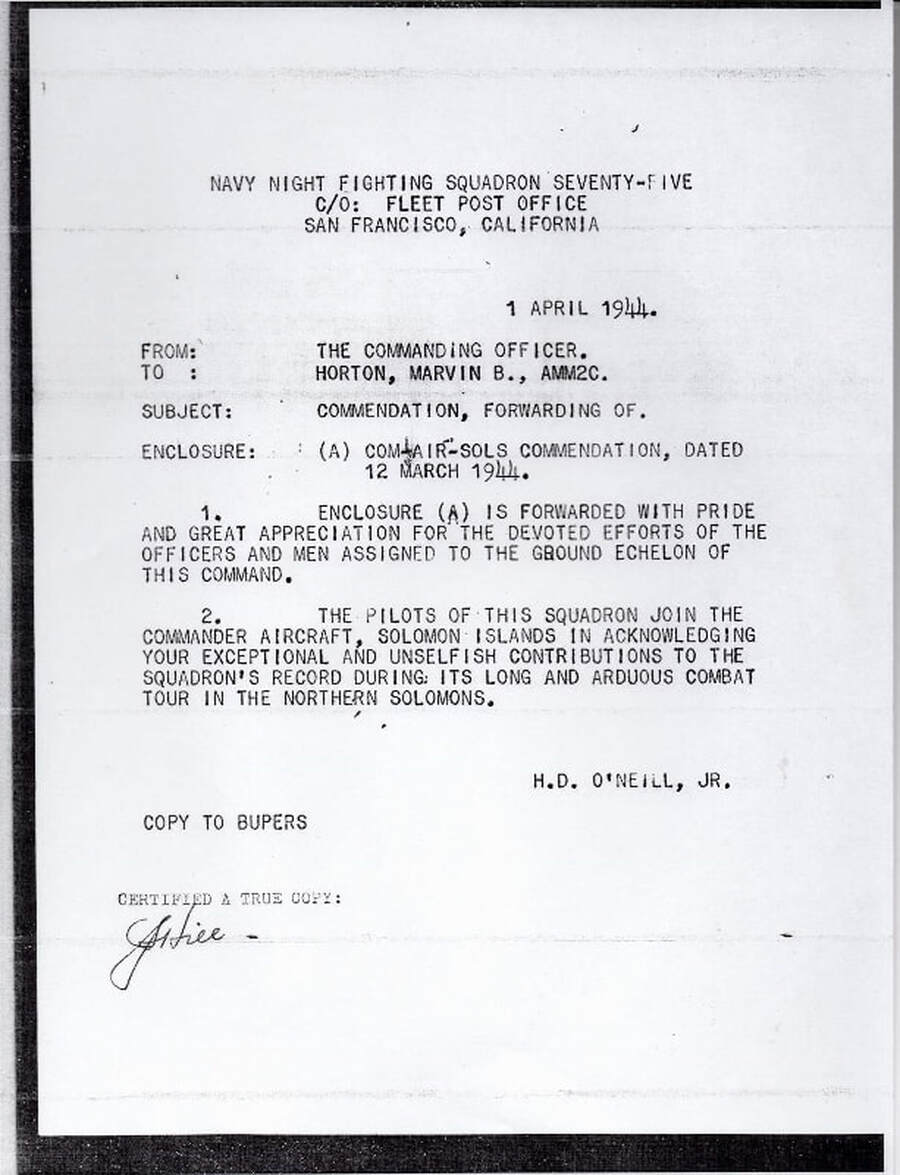 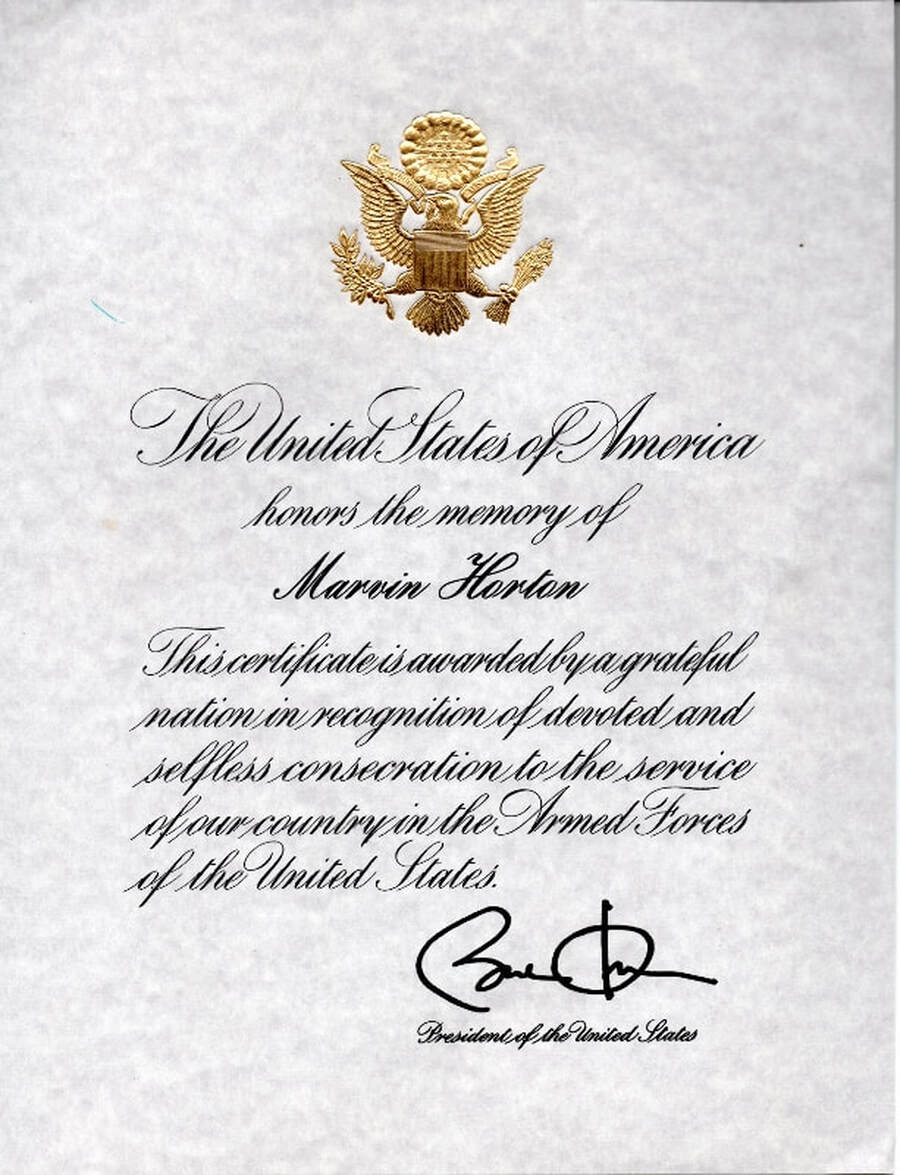 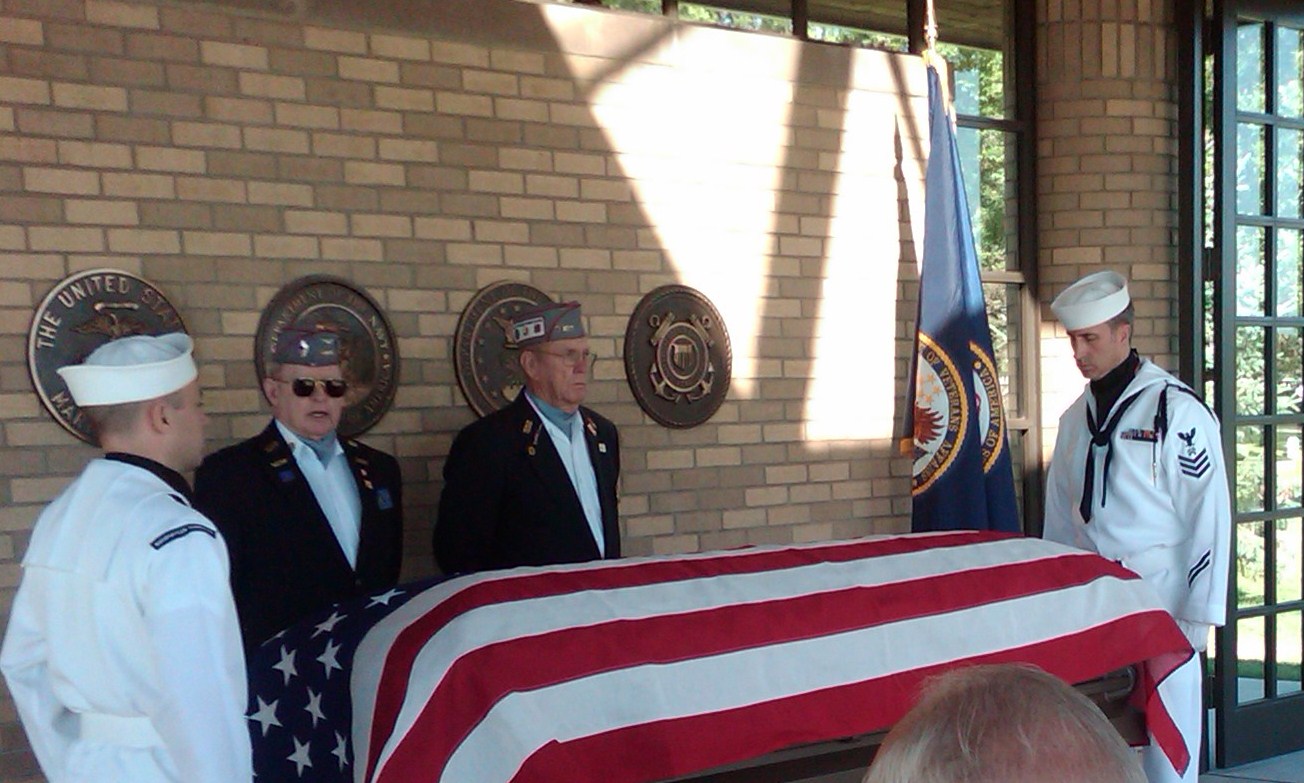 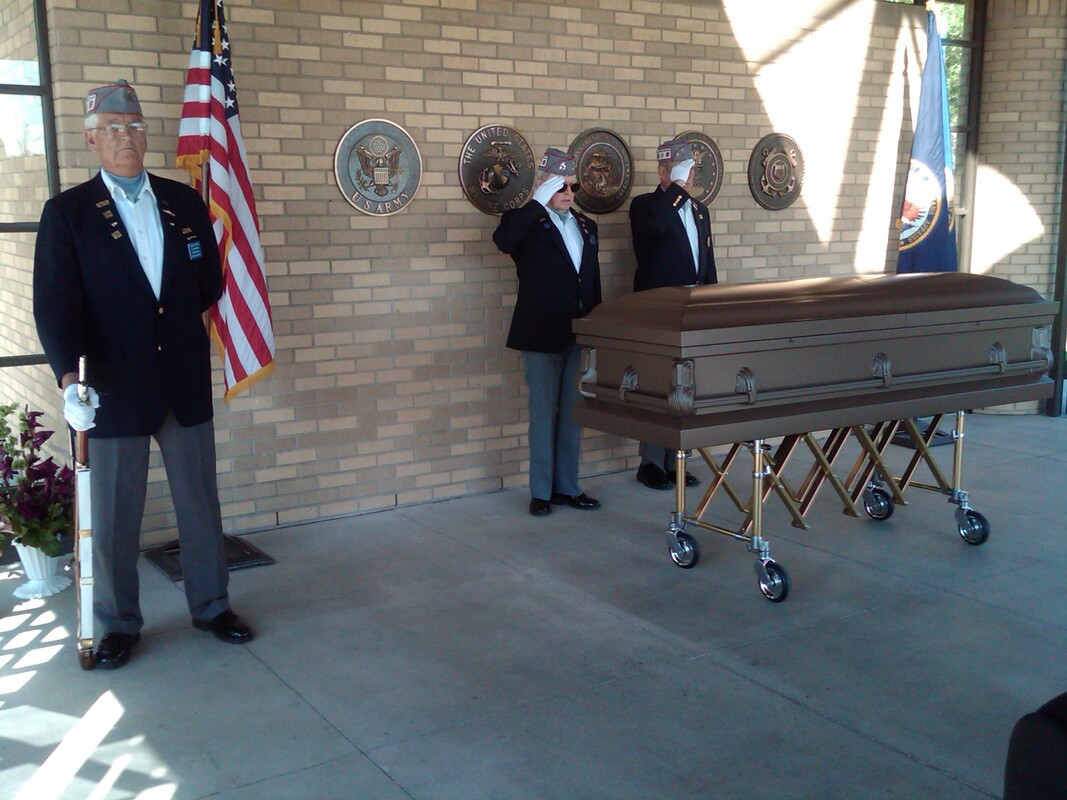 Susan Horton shared this letter by Marvin Horton that she typed for him.  It was directed to his classmates in Table Rock, in advance of an alumni banquet.  Click to download.

Download File
Shared by Susan Horton, a letter that she typed for Marvin in 2006 or 2007:
View My Stats