The five CHURCHES IN TABLE ROCK

There has been at least one inter-denominational event.  In 1917, there was a huge tent revival sponsored by the three Protestant churches. The Christian Church had sponsored a revival in 1915 (see the spread on the Christian Church below), so this was not the first.
1917 Union Tabernacle Revival

Gregg Clement has an 1870 map that indicates that St. John's Church was by St. John's Cemetery; no record or recollection has yet been discovered beyond that single mysterious marking.

The present church was built in 1877, and is reportedly the oldest church building in southeast Nebraska.

Other histories do not consistently mention it, but there were two churches built and used before the current one.  The first was in "Original" Table Rock, also known as Upper Town.  The second was built in 1879 in the Railroad Addition, also known as Lower Town.

In a December 12, 1912 Argus article about the remodeling of the church, it gives locations prior to the present one.

Beginning in 1857, when C. W. Giddings arrived with the first families, meetings were held in his home.

When in 1862 the the stone school was built across from the southeast corner of the park (where Joe & Delores Sochor now live, catty corner from the Senior Center), meetings were held there.  (The stone school was torn down in 1874 to be replaced by a frame building.)

Then the first church building was built.  It must have been in Upper Town because the article says that it was abandoned when there was an "exodus" to Lower Town.  Presumably that exodus was with the opening of the train depot.  The first train pulled into Table Rock on November 10, 1871.

In 1879, a second church was built in Lower Town.  As of 1912, the building still stood, but had been used as a residence by a Mr. Talbot for many years.

In 1882, there was another exodus -- to Upper Town.  It was at that time that the current building was constructed; most records say 1882, although in a poem by Judge Marble (below)  cites the year 1883. 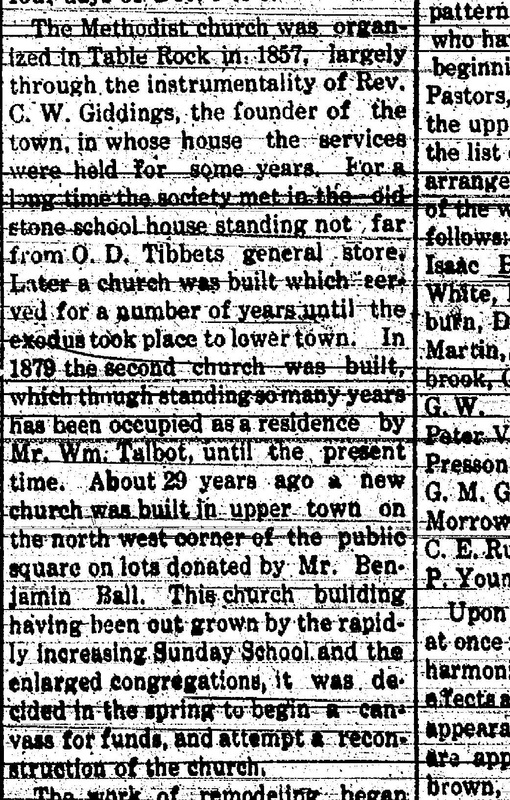 The full 1912 article
Judge Milton Marble, who arrived in Table Rock in 1870, cited one in Lower Town. He specifically identified the location of a Methodist Church in Lower Town (presumably the second) very specifically, Block 42, Lots 5 and 6. Those lots are now on Highway four, about midway between the Taylor Branch Bridge and Vine Street (the first right after the bridge, if you are headed east).  The lots were roughly the two east of where the Zelenka house once was. 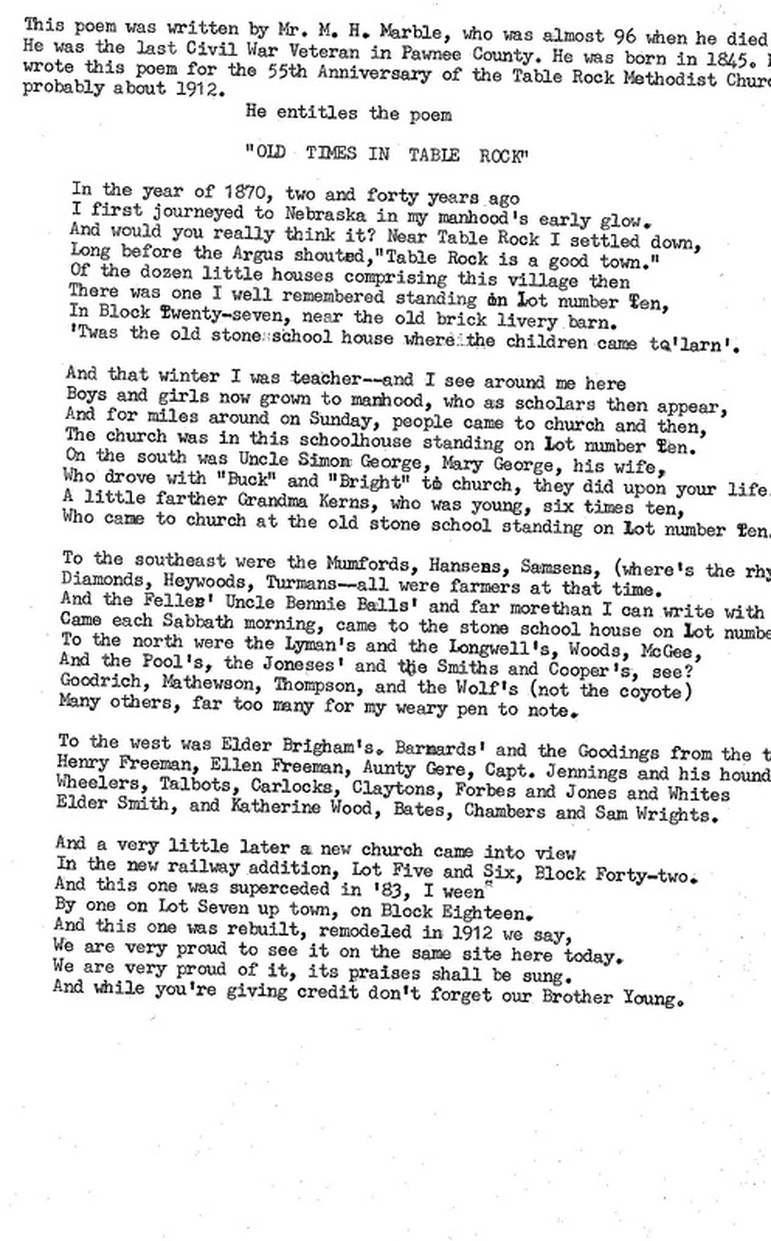 Note from Sharla Sitzman, 1/21/15: I went to the courthouse and found that Lot 6 of Block 42 had been deeded to the "T.R. M.E. Church," with a mechanics lien in 1873; I didn't find the deed itself, which could mean it was not recorded, or that I'm just a bad researcher, probably the latter. The mechanics lien is recorded in Book A, page 24.  As to Lot 5, the first recorded owner was M.J. Mumford, who bought it from C.W. Giddings in 1878. It may be that Giddings, who was, after all, the minister, simply let the church be built on his property without actually deeding it to the church.
In 1882, the building presently occupied by the Methodists was built. It was extensively remodeled in 1912.
1957 History of the Church
For articles and pictures, click on the thumbnails or the arrows:

The church was built in 1890.  In the distance in some photographs can be seen the newly-constructed brick school house (1902 - 1964).
1989 History of the Christian Church

Some articles & other pictures

Member Terry Hunt Korell, who has solid roots in Table Rock, has provided information about Easter plays at Goat Hill connected with the Christian Church.

In 1931, Thomas Russell, pastor of the Christian Church, organized Easter Services at Van Fleet Park.  Van Fleet Park was located at Goat Hill; it was more of a proposed park, which did not come to be.  In any event, 1,200 people attended.

By 1932, Russell had split from his Congregation and gone to live in a cave at Goat Hill.  He organized a second Easter service, but "only" 500 people attended.  There was never a third.

Click below to see articles from 1931 and 1932, which include the names of local people who acted in the Easter plays.

It was probably built in 1891 or 29.  In January 2015, Sharla Sitzman checked records at the Pawnee County courthouse.  In 1891, there is a deed and another recorded document that Block 26, Lot 8, was being deeded from C. H. Norris to the “Presbyterian Church, to erect church.”  It is unclear; the purchase price was either $300, $600, or $900.  The church was presumably built around that time.  This location is one block north of St. John's Catholic Church, on the northeast corner of that block.
In 1926, the Presbyterians merged with the Methodists, and the church was torn down. The lumber was used to build the new library, and the funds at hand donated for the purchase of books for the library.  There is an article about this history posted in the library.

The beginnings and end of the Baptist Church need to be explored.  It is believed to have been located in Lower Town, at the foot of the viaduct.  It is currently the Malik residence, across the street from the old Hunzeker residence.  Presumably there are others around town who can provide more information.