An application for the National Register of Historic Places has been in process.  These are some of records and information accumulated in the course of the research.  Mostly these are the original documents, newspaper articles, and so forth.They will of course be digested for the application.  Mostly they are in date order, including the histories, which are included by the date  prepared.Land records at the Pawnee County Courthouse.  Research by Sharla Cerra,  November 2017

St. John’s Church is on Lot 1 of Block 40 of the Original Town of Table Rock.
The history of prior ownership is as follows.  All are warranty deeds unless otherwise noted.  There are gaps in ownership to the extent that the grantor is not the same person to whom the land was granted by the previous owner.  It appears that the church was in the earliest days often held in the name of the priest serving the parish.  It is likely that the names of the priests were not carefully recited in the various changes of title.

regarding the name of the church
the church at table rock, st. wenceslaus, john the baptist, then simply st. john's

It appears from first-hand sources that St. John's was originally known by a different name.  Here is a list of the sources that relate to the church's name.

1882.  The marriage license of Mary McBride and Peter Muller does not cite the name of a church, referring only to Father Rausch, who performed the ceremony, as a "Catholic Priest."

In his 1888 Report of the History of St. john’s refers to the church only as the Table Rock church.

A 1999 Wymore history that includes the history of St. Mary’s Catholic Church in Wymore, a history consistent with Father Rausch’s history. It says that the earliest Catholic masses were said in the homes of parishioners.  The very first mass was said by Rev. Rausch of Table Rock and Tecumseh. The church at Table Rock was not named. http://www.usgennet.org/usa/ne/county/gage/books/jubilee/03.htm

In Mary Duder’s circa 1950s collection of remembrances Joseph Reuter, son of one of the founders, remembered that St. John's was originally called St. Wenceslaus.  He received 1st Communion from Father Maley in August 1889 and he said that his 1st Communion certificate lists the church as St. Wenceslaus.  He thought the name St. John was not used until the church was served by a priest from Steinauer.

Joseph Reuter’s memory is confirmed at least by Catholic directories in the 1880s.

There appear to have been three publishers of directories during the period 1883 to 1905:

In an 1883 version of Sadliers' Directory, at pages 504-505, it lists St. Mary's in Wymore, Rev. A. Rausch, pastor, with stations at Odell, Liberty, Burchard Church of the Sacred Heart; Turkey Creek, Pawnee County, St. Joseph; Table Rock, Pawnee County, St. Wenceslaus; and Humboldt (no church listed).  This directory was found at ​https://play.google.com/books/reader?id=b-DQAAAAMAAJ&printsec=frontcover&output=reader&hl=en&pg=GBS.RA1-PA505

1886 Hoffman’s directory:
At page 265, it lists this under the Diocese of Omaha, served by Rev. A. Rausch, pastor, of St. Mary's in Wymore, and with stations at Sacred Heart in Burchard, St. Wenceslaus in Table Rock; Humboldt; Odell, Barneston in Gage County (no church listed), and Turkey Creek in Pawnee County (“Turkey Creek” was generally a reference to the Pawnee City area; the Steinauer area was generally referred to as “upper” Turkey Creek).
Found at https://books.google.com/books?id=WuDQAAAAMAAJ&pg=RA1-PA265&lpg=RA1-PA265&dq=table+rock+nebraska+wenceslaus+catholic&source=bl&ots=0QlXxuHr2t&sig=BHQWKsYscynebOSygvfrDqO57Pc&hl=en&sa=X&ved=0ahUKEwiyx5PXxdbXAhUEwYMKHbPfBesQ6AEIUzAJ#v=onepage&q=table%20rock%20nebraska%20wenceslaus%20catholic&f=false

1888 Hoffman’s
The Hoffman's third annual edition in 1888, at page 273, lists Table Rock's church as being in the Lincoln Diocese and the name the church as St. Wenceslaus, "attended from Wymore."
Found at https://books.google.com/books?id=soNBAAAAYAAJ&dq=table%20rock%20nebraska%20wenceslaus%20catholic&pg=PA273#v=onepage&q=table%20rock%20nebraska%20wenceslaus%20catholic&f=false

1888 Sadliers
​Sadlier’s directory, at page 251 lists the Rev. A. Rausch as pastor of St. Mary's in Wymore, and with stations at Sacred Heart in Burchard, St. Wenceslaus in Table Rock, a nearly finished, as of yet unnamed church in Odell; Humboldt (no church listed), and Barnston,n which was "attended occasionally."
Found at: https://books.google.com/books?id=CNPUAAAAMAAJ&lpg=RA1-PA251&ots=9hsM-chkdl&dq=google%20book%20Catholic%20Directory%20table%20rock&pg=RA1-PA250#v=onepage&q=google%20book%20Catholic%20Directory%20table%20rock&f=false
1905 “Official Directory”

1905 History
​In this directory, at page 410.  The church at Table Rock is identified as “St. John the Baptist Church,” a mission of St. Anthony of Padua in Steinauer, in the Lincoln Diocese. (Burchard continued as a mission of Wymore).
This directory was found at ​https://books.google.com/books?id=MLdGAQAAMAAJ&pg=PA410&lpg=PA410&dq=table+rock+nebraska+wenceslaus+catholic&source=bl&ots=hgAze6AATV&sig=IQc4zf8LiZAyTq7M5ngQPNkZegg&hl=en&sa=X&ved=0ahUKEwjWsNKszNbXAhWI3YMKHVt-BgM4ChDoAQgnMAA#v=onepage&q&f=false


A 1987 history identifies the church only as St. John’s, that publication being “History of the Catholic Church in the Diocese of Lincoln, Nebraska, 1887-1987,” written by Loretta Gosen in 1986, published by the Catholic Bishop of Lincoln in 1986.  Table Rock is listed in ten places, including pages 109 and 151.  It was digitized by the University of Wisconsin – Madison on September 9, 2009.  It was found at https://books.google.com/books?id=NwriAAAAMAAJ&source=gbs_navlinks_s.

Table Rock is mentioned in the Woodstock Letters, Volume XI, No. 1, January 1, 1882, available at the Jesuit Online Library.  The text describes priests going to the various Jubilee Missions, with a section about Nebraska at pages 78 to 86. Table Rock is addressed at page 83.

At page 78, it begins with saying that the priests arrived for the purpose of giving “Jubilee Missions” at places to be designated by the bishop.  A jubilee celebration in general is one that celebrates a 75th anniversary of something.  At one point in the text it cites a Jubilee Mission “rather a triduum.”  A triduum according to Wikipedia is a celebration of three days.  In this case, the priests arrived in Table Rock on ,Saturday, July 16, celebrated mass on Sunday, Monday, and Tuesday and they left for Plum Creek (present day Steinauer). 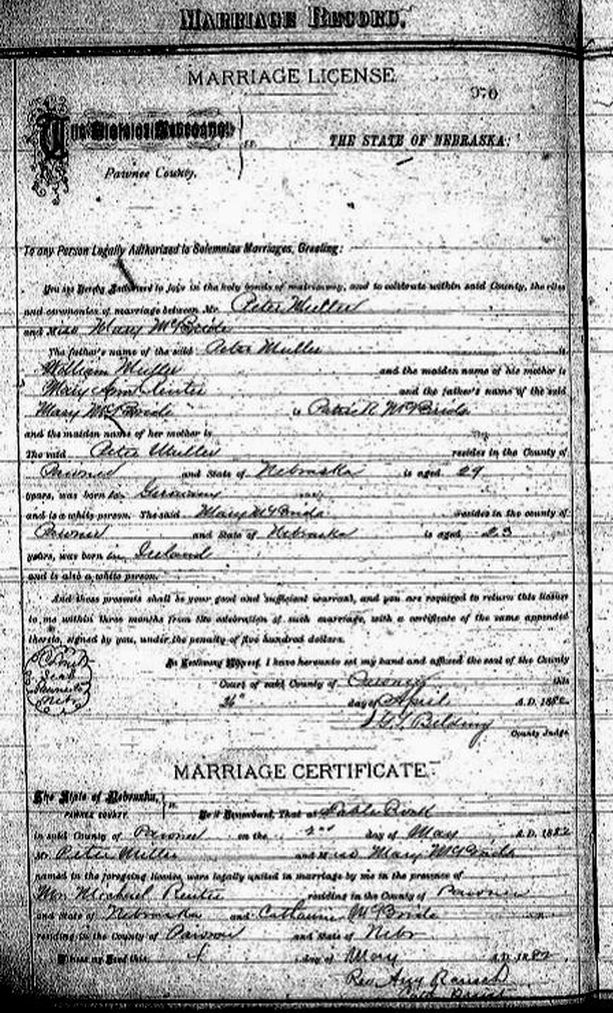 Thank you to descendant Sandi Knippelmeyer for this copy. 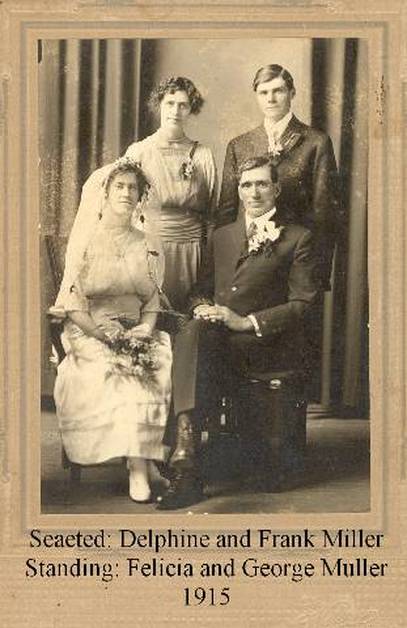 ​ Gwendolyn Louise (Burger) Oenbring, 84 of Pawnee City, Nebraska passed away on Friday, July 20, 2012 at home with her family. Gwen was born on July 15, 1928 at home in The Lindsley House, a two story limestone building constructed in 1872 which served as a hotel and was one of three commercial buildings that survived a devastating fire of 1920. The limestone construction and location one block from the public square at 706 Luzerne Street remains as a rare surviving remnant of Table Rock's early commercial development. Her parents, Peter E. Burger and Oneta (Criger) Burger had rooms there while her dad worked with the telephone line.

Gwen attended School District #45 Mount Zion in Nemaha County 7 years then finished at School District #49 Hillcrest in Pawnee County, also known as the Miller School. She then stayed home to help her folks on the farm northeast of Table Rock.

She met her future husband, Vernuss Albert Oenbring at the Table Rock fair when he threw rocks at her horse she was riding in the parade. They were married on October 2, 1947 at the St. John's Catholic Church in Table Rock and resided 6 miles south of Pawnee City for 42 years. To this union 5 children were born, Glenda Lee, Betty Ann, Roy Eugene, Gail Ann and Doris Ann. In 1990 they retired from farming and moved into Pawnee City. She worked part-time for the Little Brown Jug and was active with the grandchildren.

She belonged to St. Anthony's Church and Altar Society in Steinauer, State Line Club, Rural Neighbors Club, Red Hat Society and VFw Auxiallary 5289 for over 50 years and was on the Avenue of Flag committee. She enjoyed her flowers and decorating her home inside and out for special days. She loved watching Baseball games, especially the Cubs, and attended the Cubs vs St. Louis Cardinals in Chicago at Wrigley Field and in St. Louis to see Sammy Sosa and Mark McGuire play which she really enjoyed. 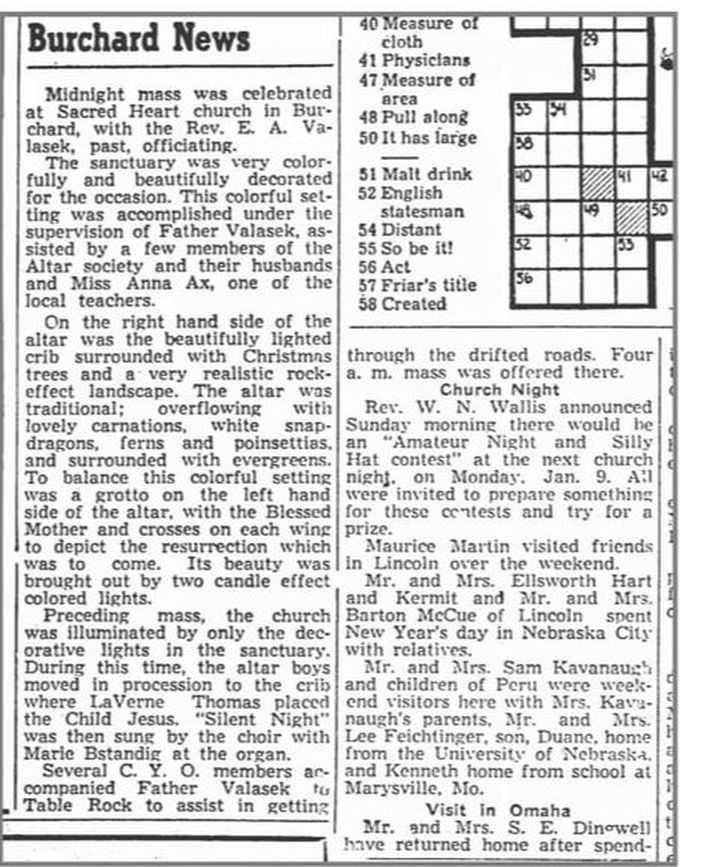 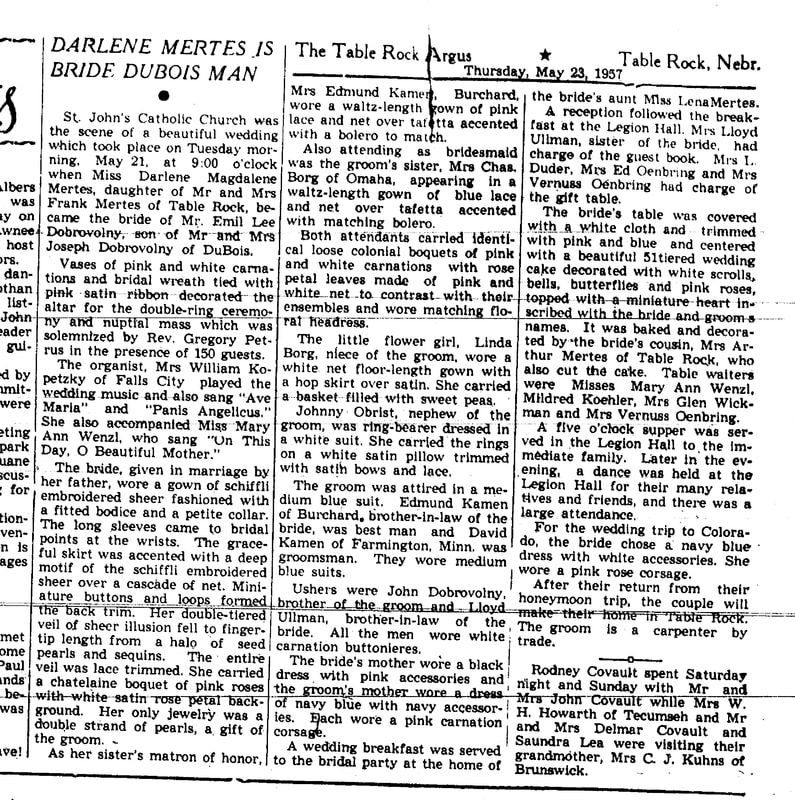 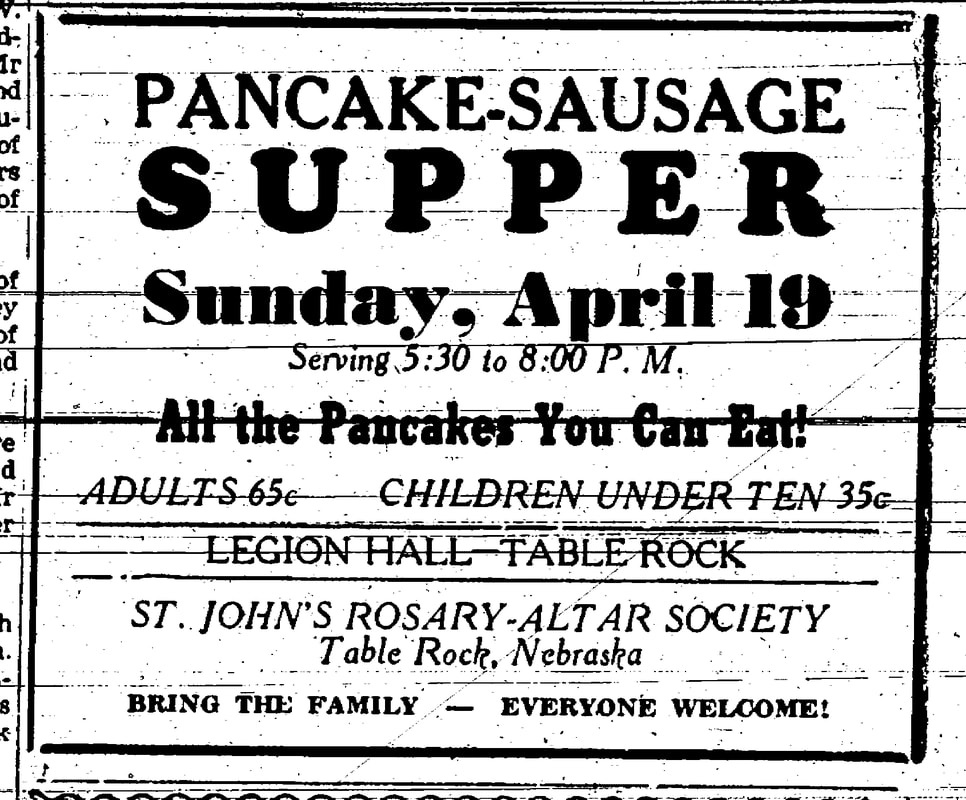 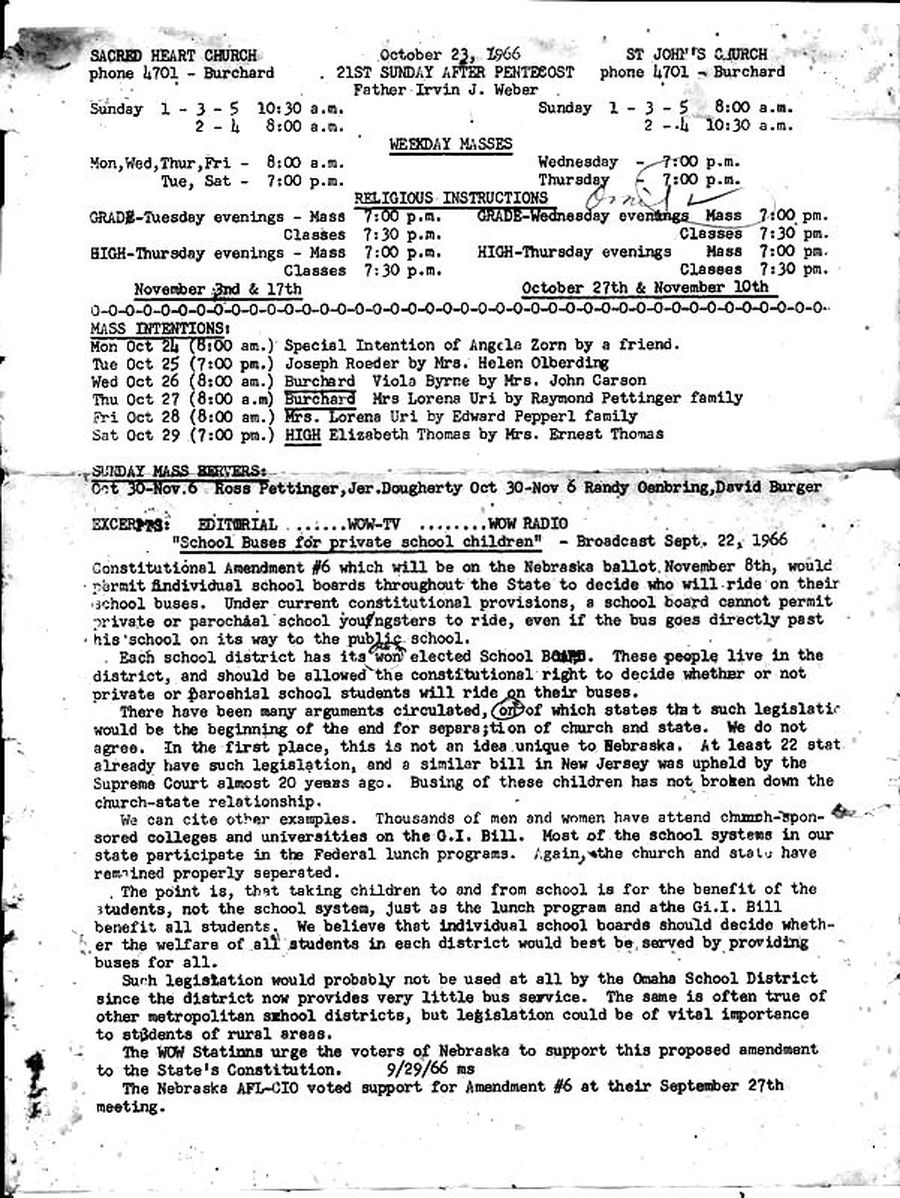 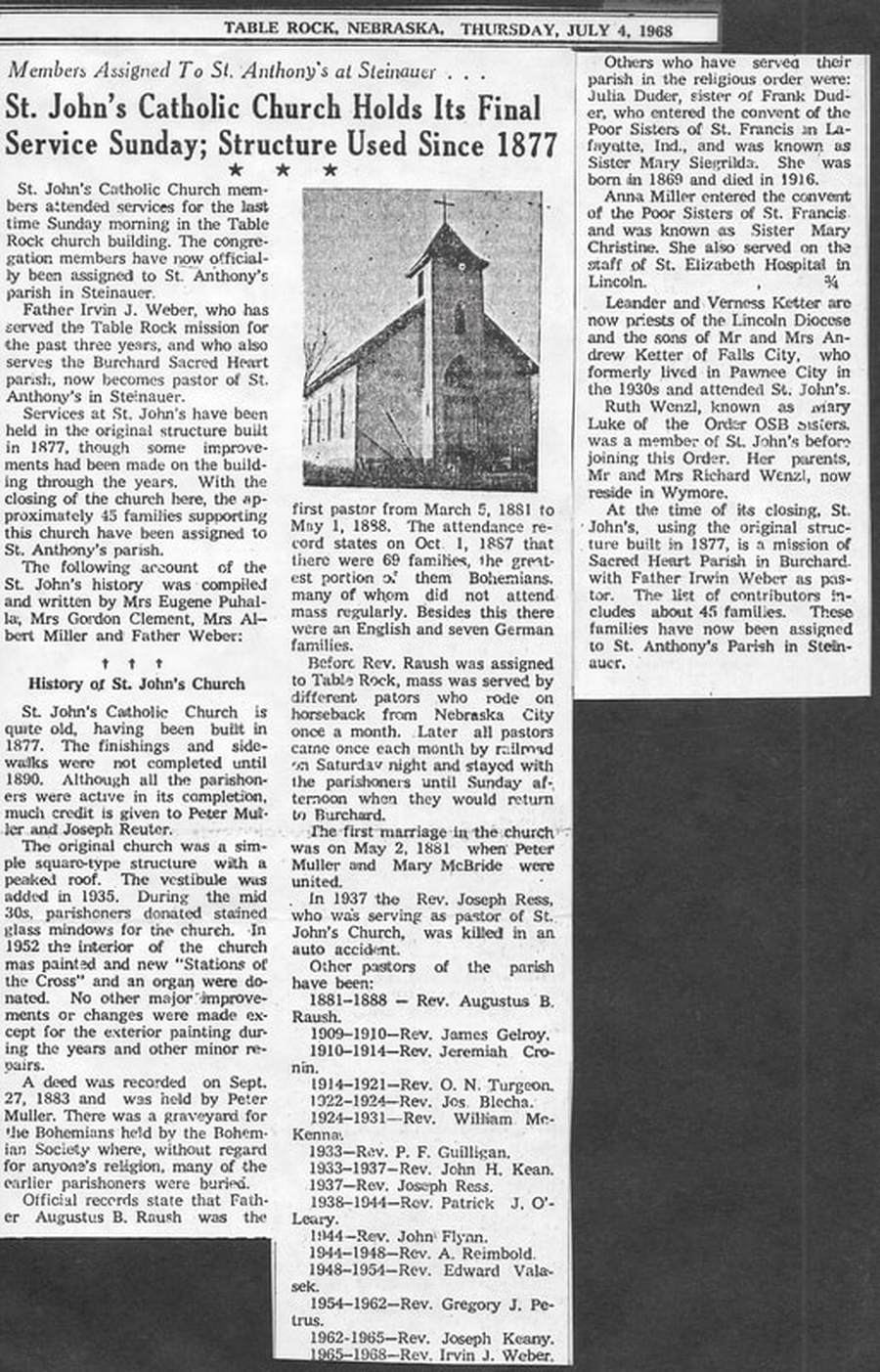 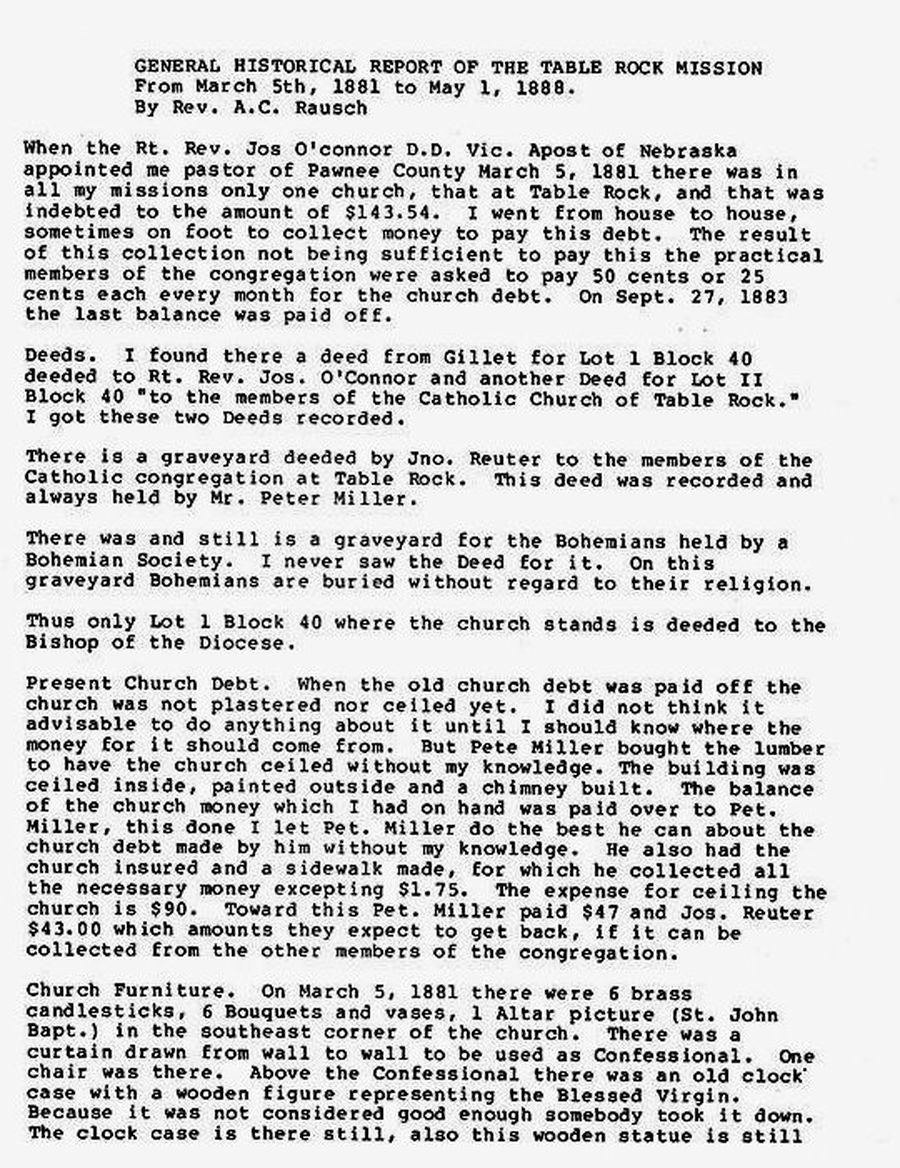 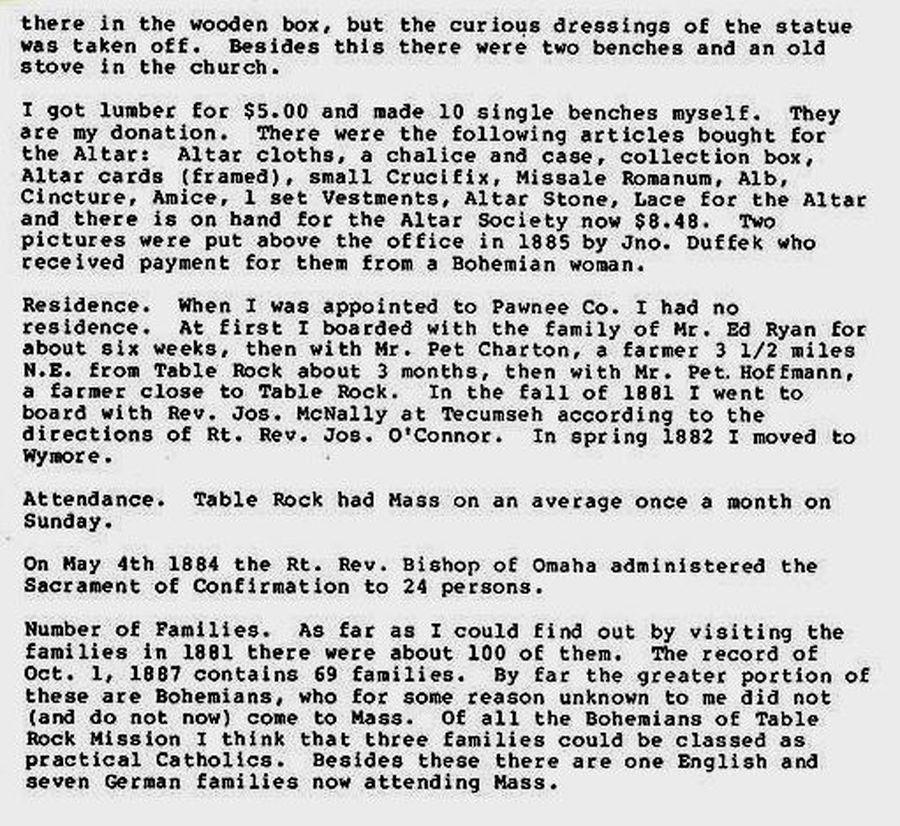 1962 history by remembrance
mary duder's collection of
personal histories from church members
date is approximate; by content, collected circa 1953-1962 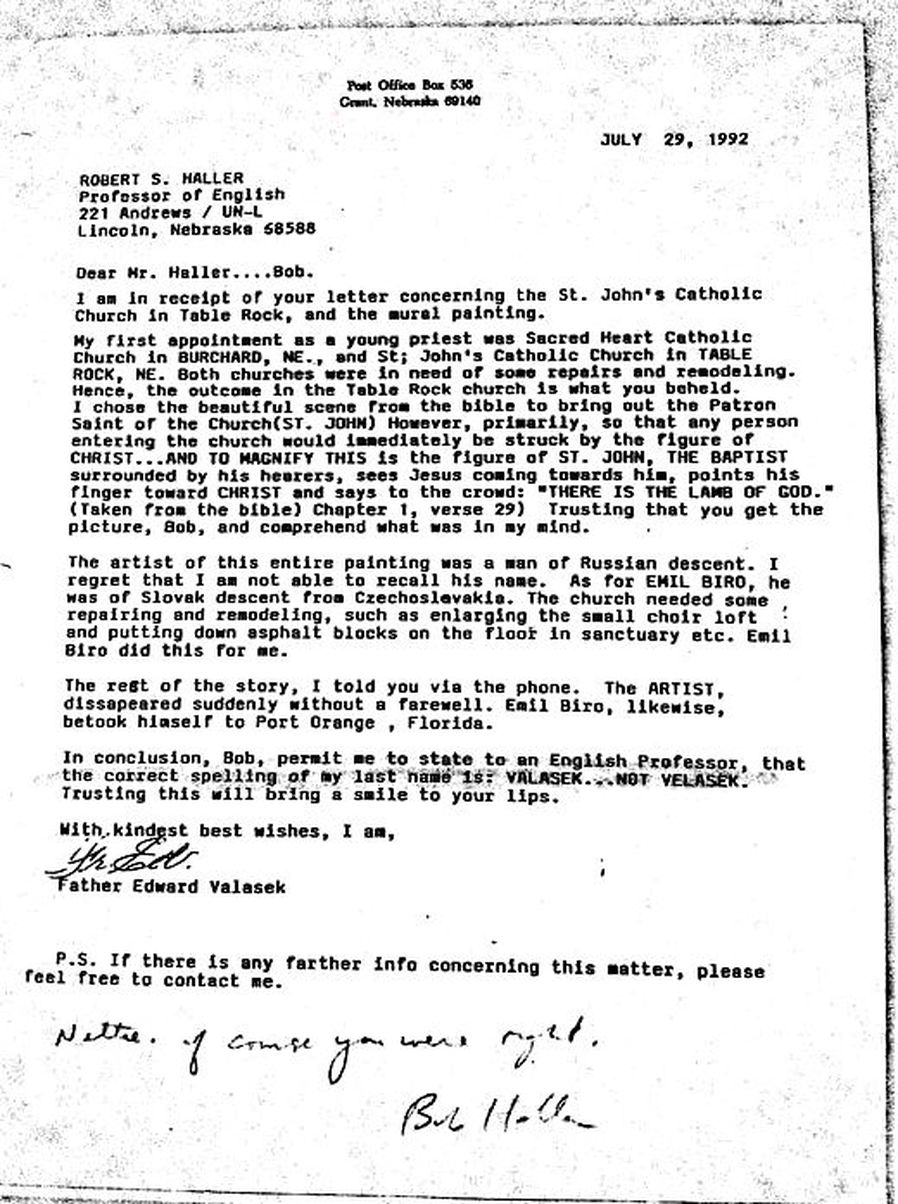 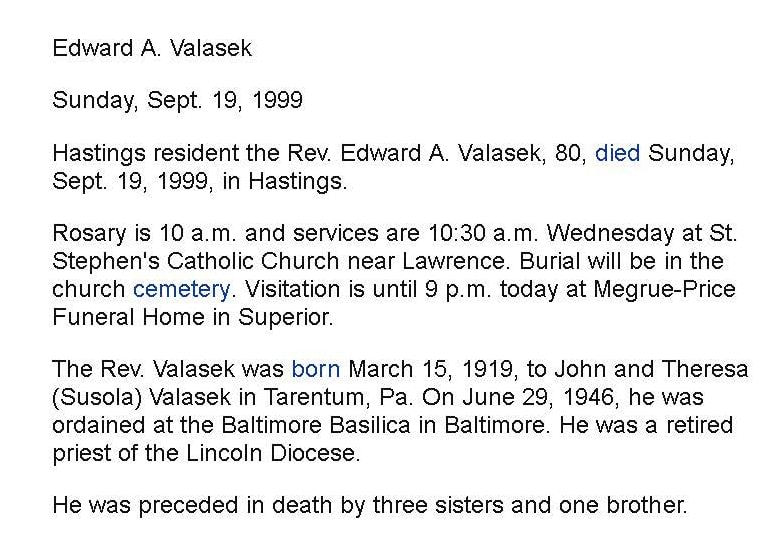 1970 donation of the property
​to the table rock historical society 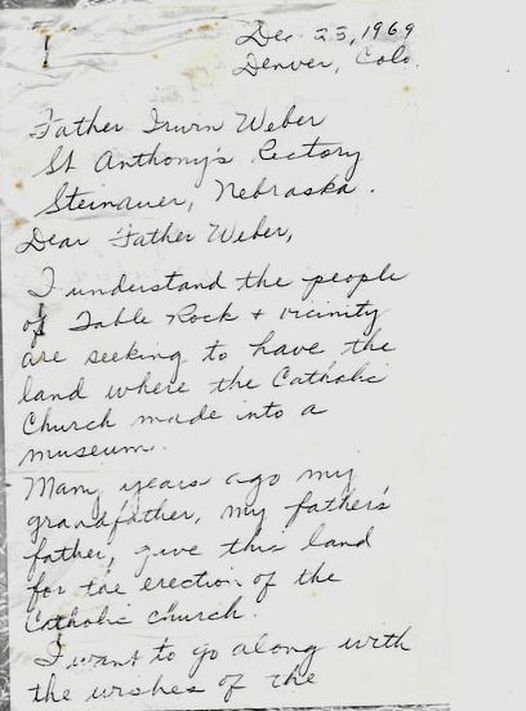 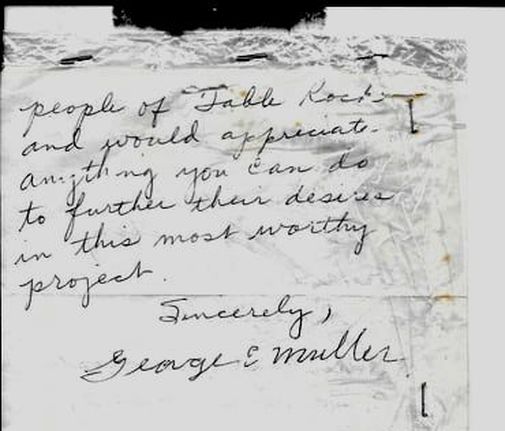 a brief history of the diocese of lincoln

​This history begins with the formation of the diocese in 1887.  Table Rock is not cited, but it became part of that diocese once it wa formed.