the argus
A CREATURE OF 1,000 HEADS
AND  A COUNTRY NEWSPAPER OF MANY LOCATIONS.

The earliest surviving edition - June 17, 1882. Volume 1, Number 4.
The Argus was established in 1882.  In 1974, after owner/editor Rudy Senft died, the paper was taken over by the owner of the Pawnee Republican and published until about 1978.  After that it was incorporated into the Republican as a section, which was eventually discontinued.

Many of those in Table Rock who have been around long enough to be proud of their age remember that the Argus was located in a number of locations before it ended up here.

Most recently, it was in the basement of this building.  When enterprising folks wanted to put a bowling alley there (which they eventually did), they asked Rudy if he would mind moving.  He said he would be happy to move upstairs if someone else moved his press and other machinery. So they did.  And here it is.

Before Rudy took over the paper, the Argus, founded in 1882, was in at least two other locations, both on the West side of the square.

two earlier buildings on the west side of the square

THE ARGUS IN ITS ORIGINAL BUILDING ON THE WEST SIDE OF THE SQUARE, in an 1893 photograph from his granddaughter Wilmetta Taylor Leslie.  The Argus was only eight years old.  The young man on the left is surely Frank Taylor, who would be editor until 1930, with brief periods away; he would have been 36 at this time. He had owned the Argus for six years, having bought it in 1887. Photo 206: 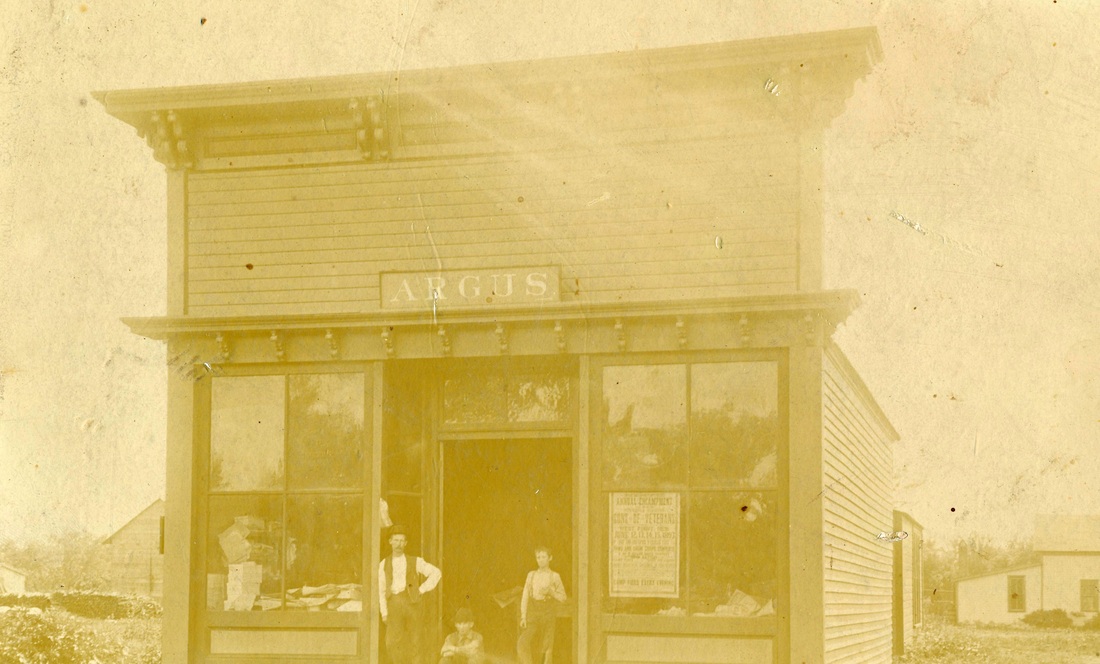 Enjoy some of the details of Photo 206, including a poster for an 1893 event that dates the picture.  The event was an Encampment of the Sons of Veterans:
Statement of ownership in the February 7, 1893 edition: 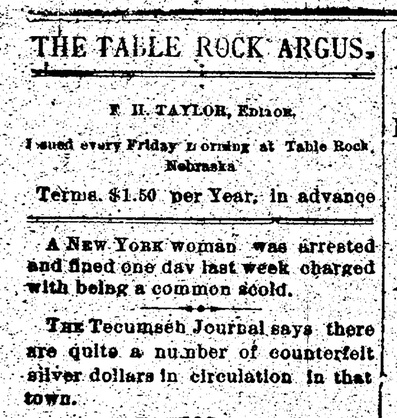 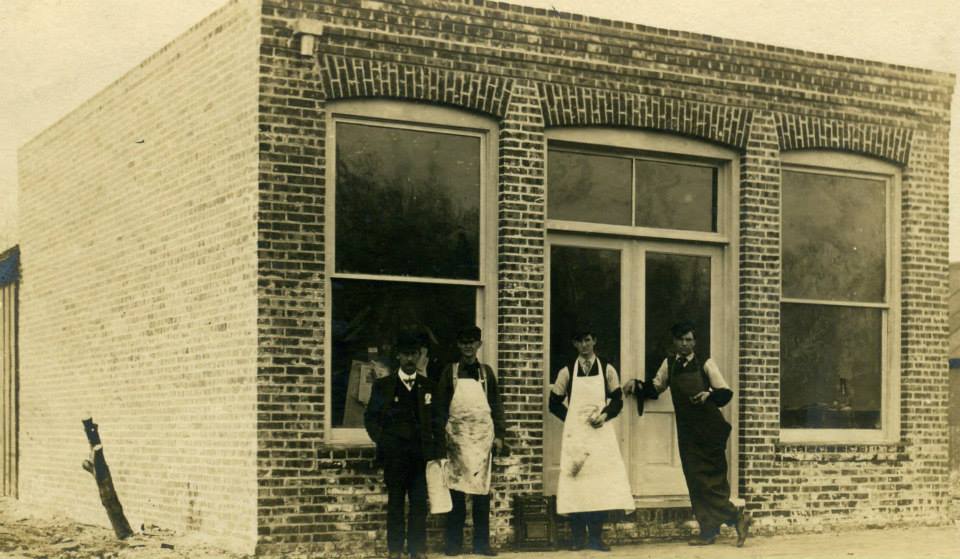 Here's how the fact that the move was recent is known.  On the back of the other photo is a message to Max Marble from "O.B."  It says,

Here's how the identity of the men is identified.  In the other copy of this photo, the names of the men are annotated" F. Taylor, Dow Tressler, Alvin S_____, and Ott Barnes."

As to the little note on the back of the card, something is known about some of the people. Max Marble was the son of long-time resident Milton H. Marble, and a newspaperman himself; at one time, he was editor of the Elk Creek paper. Will Scism, mentioned in the postcard, was also a long-time resident. "O.B." who signed this card must have been been Ott Barnes, the man on the far right.  Ott Barnes became the editor of the paper for a time beginning in probably 1912 and lasting for perhaps five years.

Here is a slide show with the back of the postcard above and the other photo with the men's names added.  This is Photo 185:
Here is an ownership statement from a March 11, 1909 edition of the Argus.  It also mentions that the paper is "Republican in Politics."t 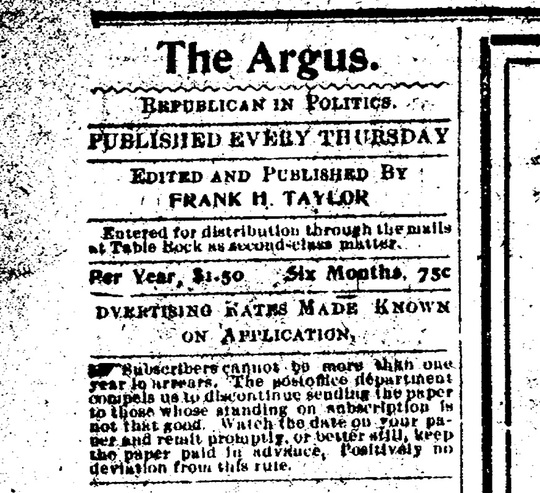 Photo 108 is undated. Frank Taylor is seated.  He appears relatively young.  He was born in 1857.  The interior woodwork looks unmarred, and the window is clear. Perhaps this photograph is of close vintage to the one taken in 1909. 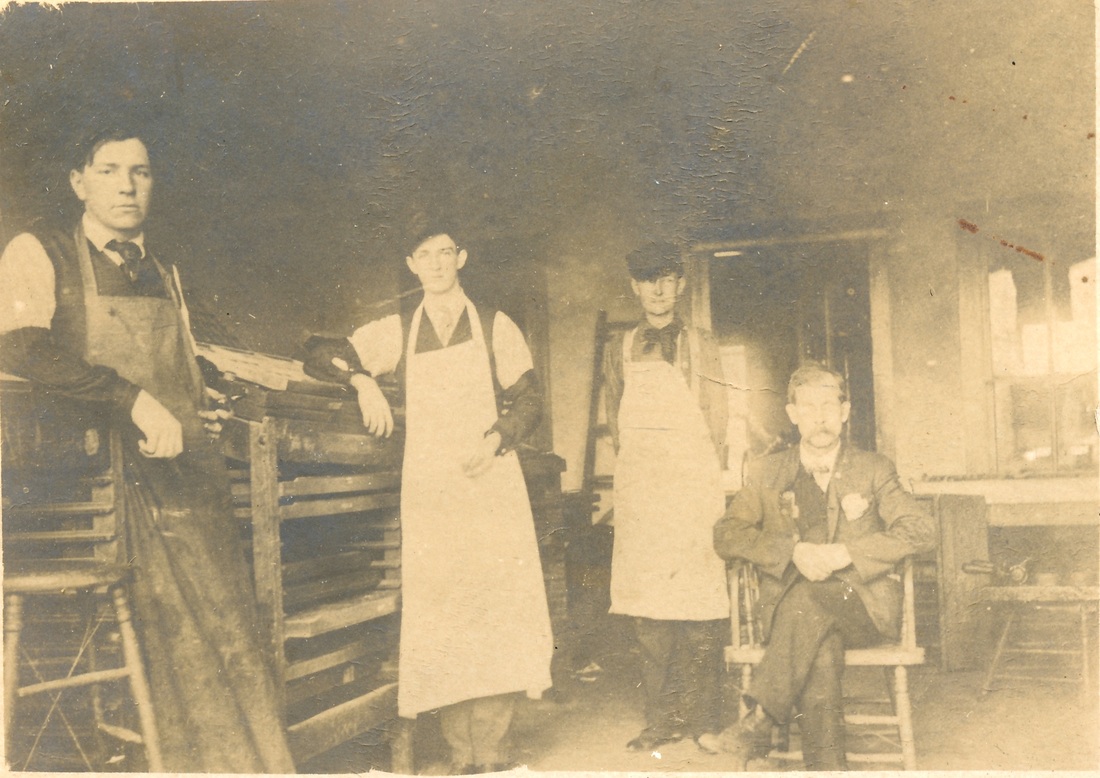 Compare the above with an excerpt from Photo 185 from 1909.  The men even appear to be wearing the same clothes:

Where was the brick building located? On the west side of the square.

This brick building was likely in about alley on the south side of the present Pioneer Museum. It can be seen in context in this undated picture of businesses on the West side of the square. By the time of this later photograph, the building appears to have been abandoned, with large boards inside the window helter skelter. There is a tree on the south side; in the 1909 photograph there is a stump in that location.  The lots to either side of it were still empty.  Photo 12:
Other pictures of the businesses west of the Square

Photo 184 bears the date 1929, but the calendar in the far right of the picture is opened to June 1921.  It is unlikely that the only calendar showing in this expansive view of the office would be eight years old.  1921 is probably the correct date. Frank Taylor is on the left, marked with an X.  He would have been 64 in this picture. 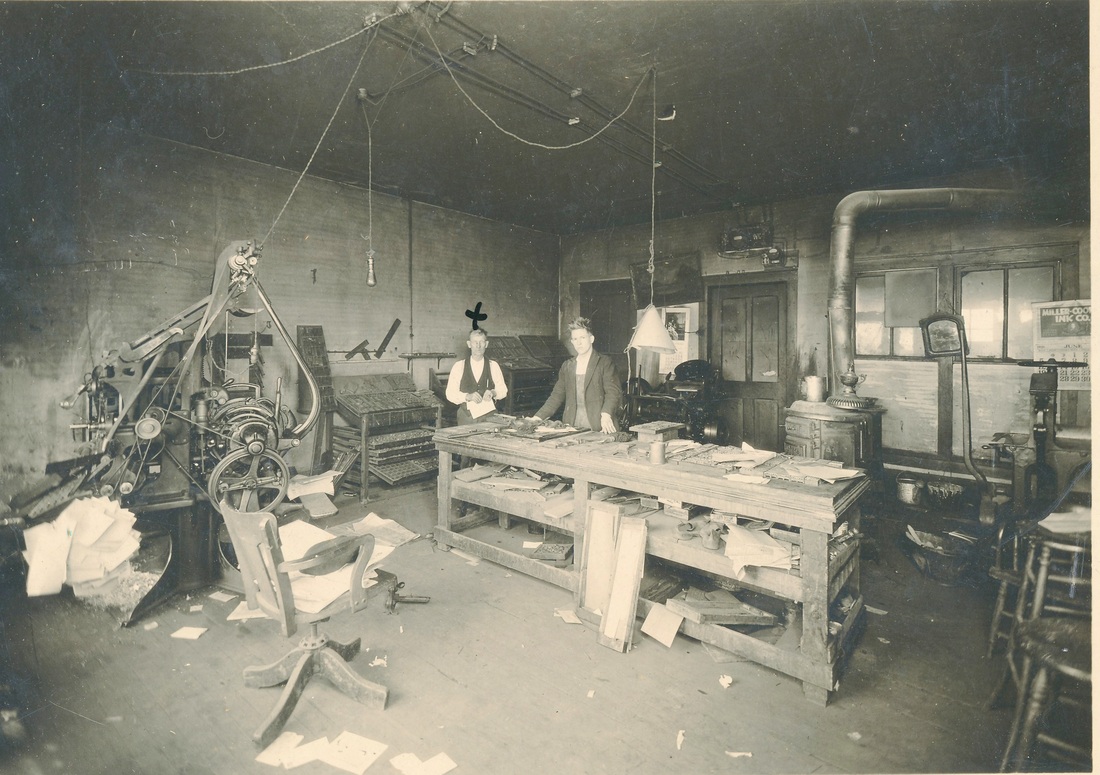 Excerpts from this photo, fun to look at:

At some point, the Argus moved into the basement of the building now housing the Argus Museum and the newspaper printing equipment most recently used.  By probably late 1959, it was moved upstairs in order to accommodate a bowling alley that was set up in the basement. 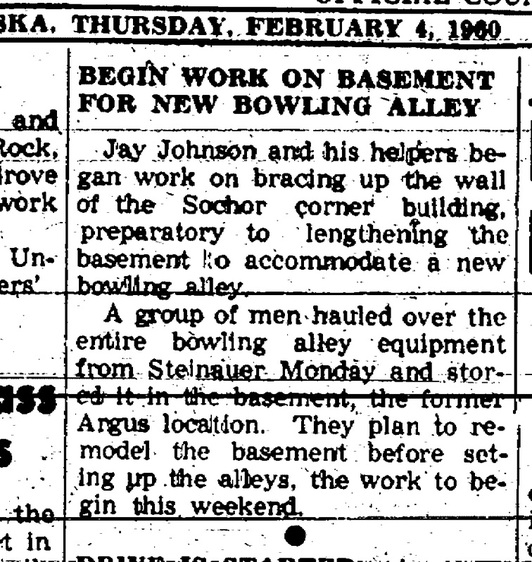 The most recent Argus office was located in the store occupied in the early 1900s by the Nemecek Brothers grocery. 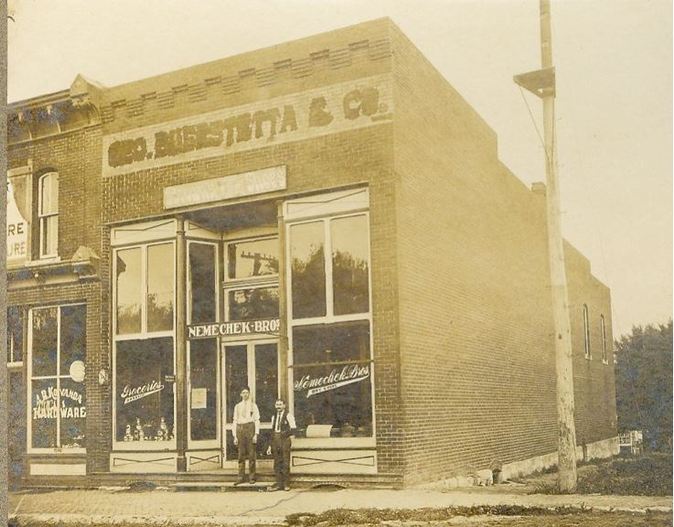 Frank Taylor, one of the Long time editors of the argus. 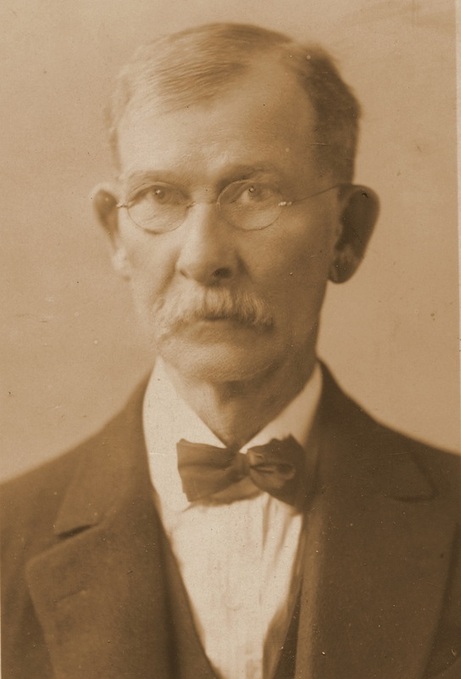 Rudy Senft - the other long-time editor of the argus

Rudy Senft came to the paper in 1940 as an employer.  He bought it a few years later.  Here is Photo 251, an excerpt from a photograph of a 1943 high school football team that Rudy coached. He would have been 29 years old: 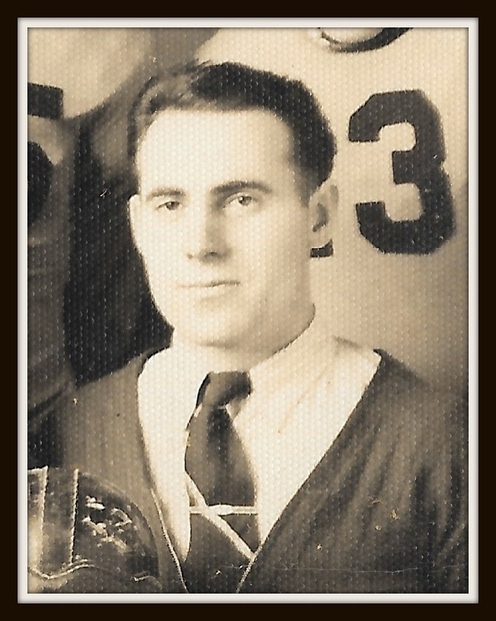