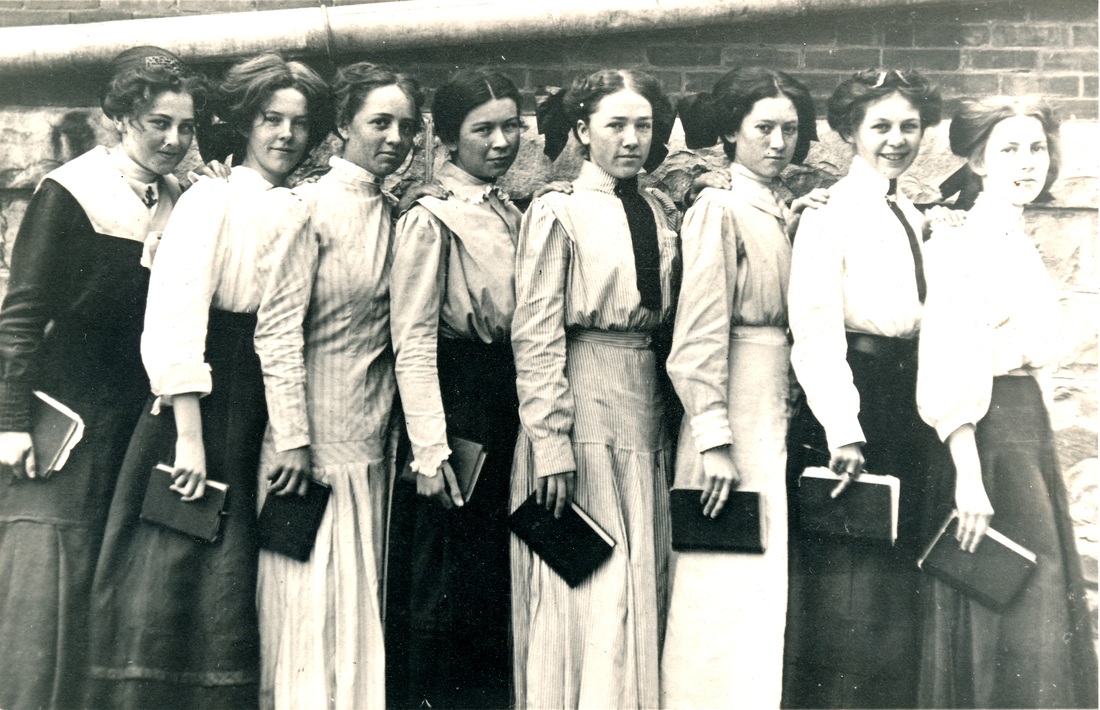 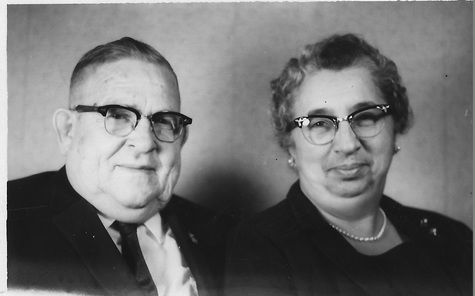 A poignant editorial in the April 3, 1913 Table Rock Argus waxes eloquent on the special niche of a home town paper, which then apparently typically had a red address label.  The editorial is obviously pulled from a news service, yet so eloquently explains how precious a genuine small town paper is.

It describes some of the types of the personal news of a home town and its people. Then it says of those stories of the people of the home town,  “all of them appear in a never-ending moving picture before the eyes of the people every seven days.  The man who has wandered from his fireside picks it up, and again is spread before him the whole panorama of his boyhood’s golden days.

“The stern-faced man of millions in his spacious office reaches out eagerly every Saturday morning and paws over the pile of mail until he finds the dinky little paper with the red label on it.  The careworn woman in the humble home on the Western claim glances frequently from the doorway down the long winding road at the close of a certain day every week...She, too, is looking for the paper with the same little red label on it.”

“They scan every item – the man of gold and the sad-eyed woman, and the marble halls and the flush of power, and the dingy walls and gnawing of want, fade away and are forgotten....”

Here is the full text:

Frank and the Table Rock Argus 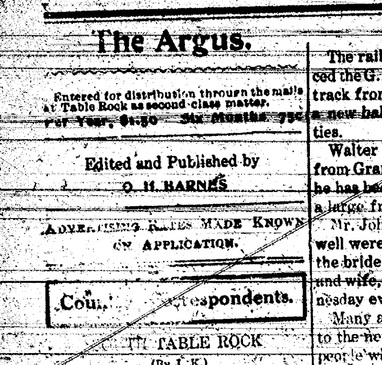 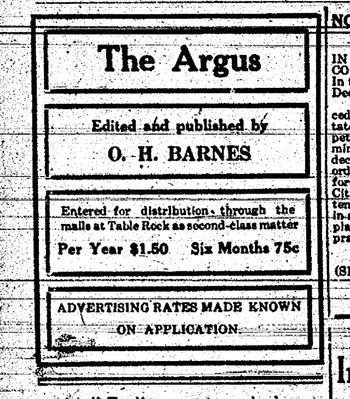 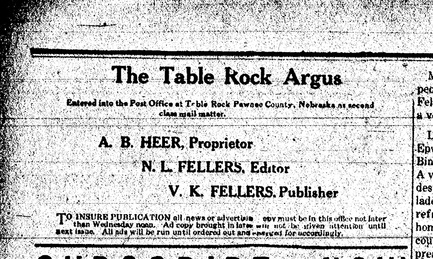 First surviving issue of the Argus to have Frank Taylor identified as the editor (October 1890).  (There was a large gap in the surviving editions between 1884 and 1890.) 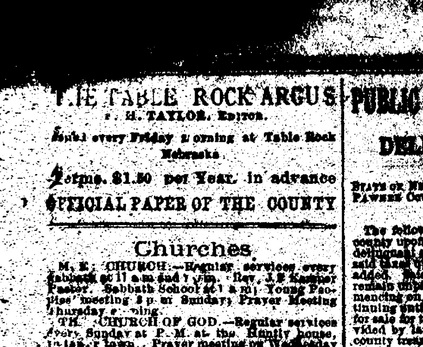 Frank at the Argus in 1909, a postcard that was sent to Judge Marble's son Max by "O.B.," presumably Ott Barnes. 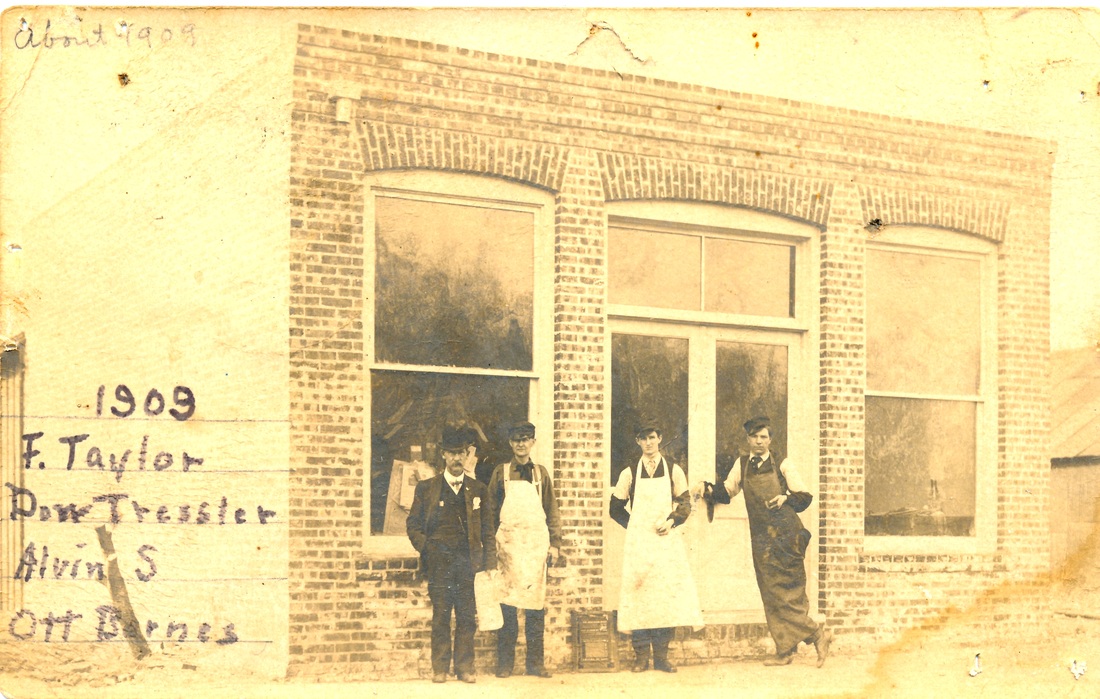 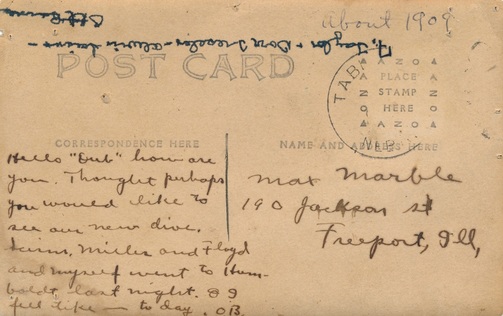 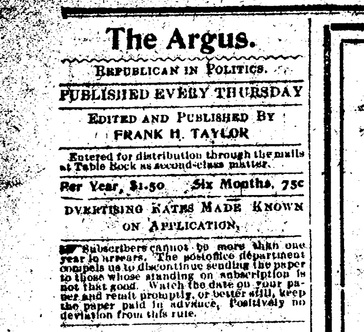 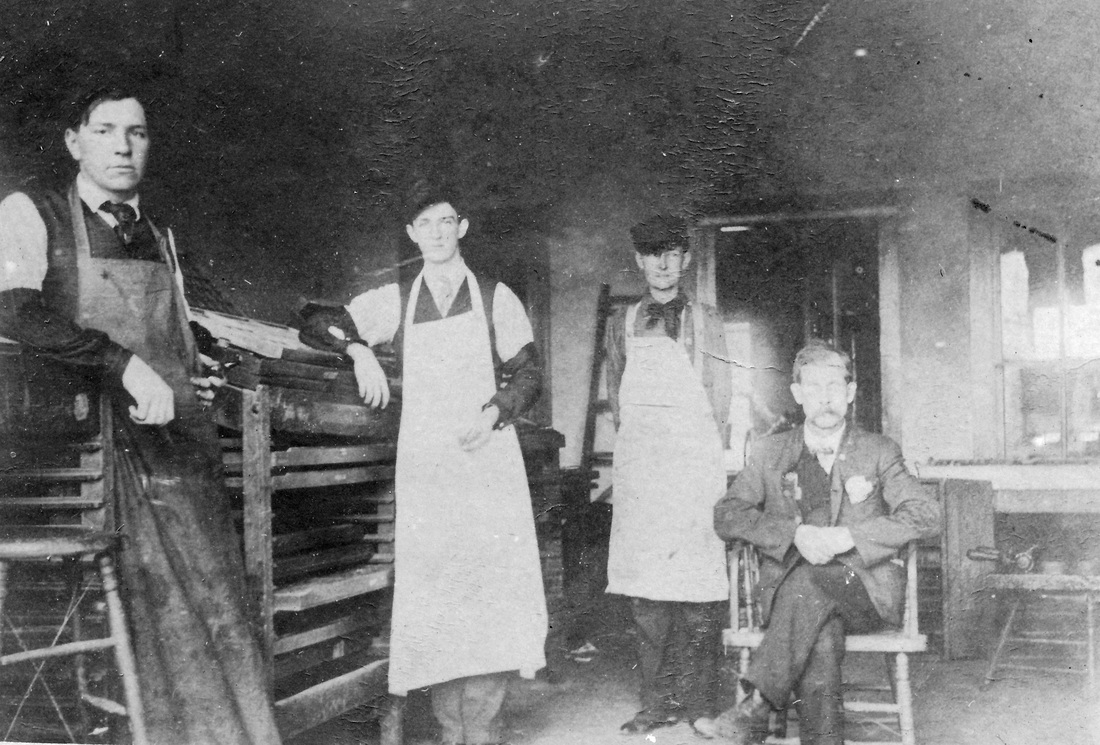 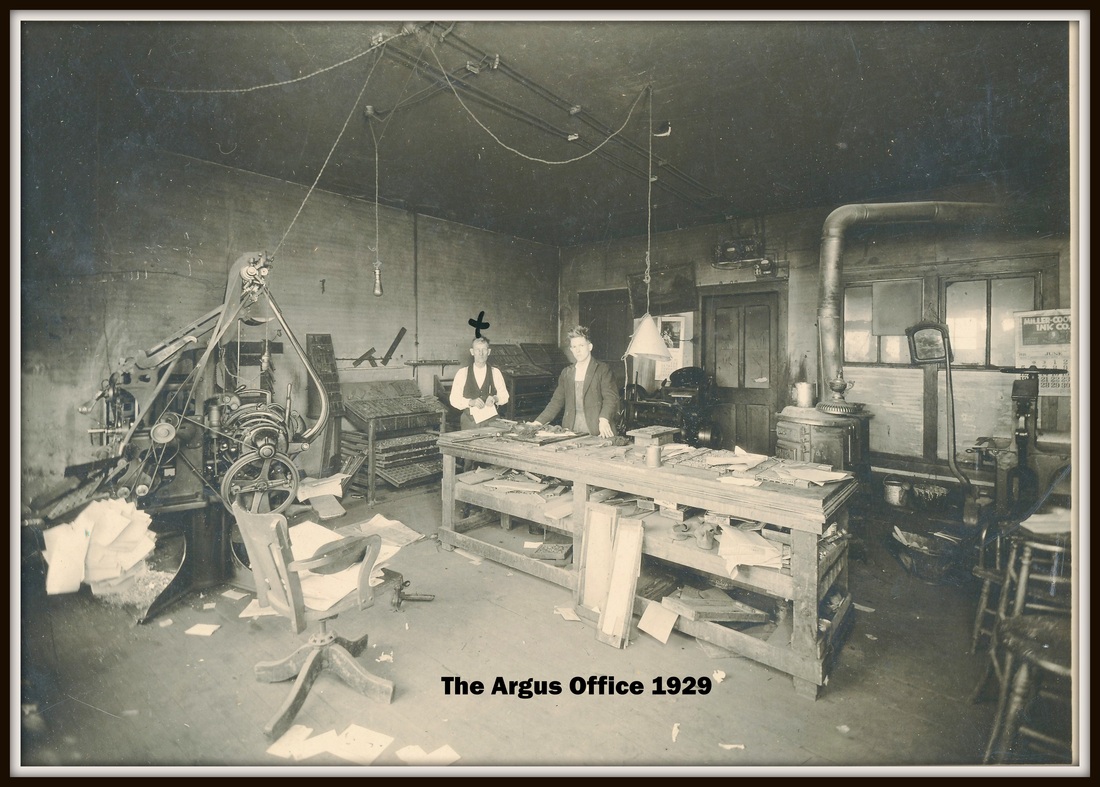 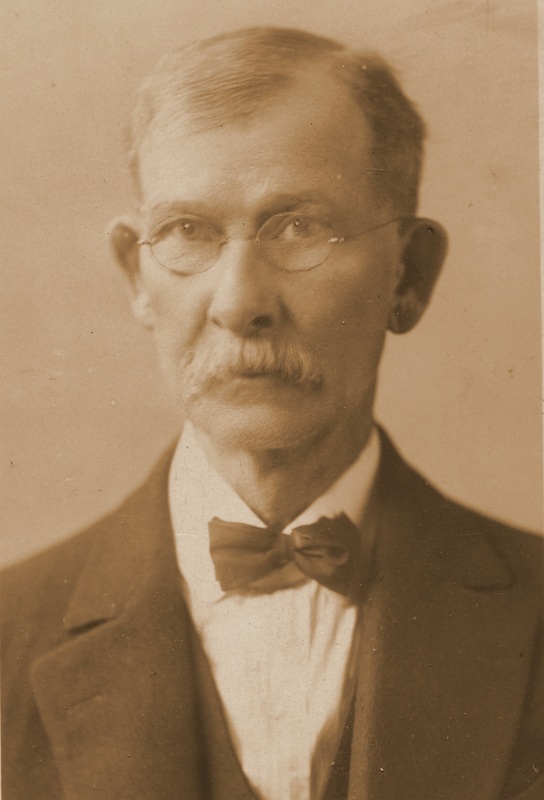 On May 16, 1930 -- a few years before his death -- Frank wrote a poignant editorial about the 50th Anniversary of the Argus in which he, himself, looked back over his many years as editor of the Argus:

“If you look at the volume number, you will find it volume fifty, number three, so that the Argus is a little more than fifty years of age.

On the 14th day of May, 1887, I took charge of the paper, and it has been the subject of my best efforts, during those intervening years, except for a short time when I was out and the paper was in other hands.

That is, that forty three years of my life have been centered on the Argus.  Not a very big accomplishment perhaps but it represents the very best that was in me both mentally and physically, for most of the mechanical work of “getting out the paper” has been done by myself.

When I came I was a young man, full of ambitious energy and hopeful of a splendid future for my paper and my town.  That these hopes have not been fully realized has not lessened by love for either the paper or the community.

Most of the young people with whom I fellowshipped in those days are grandparents like myself, many of them have been carried to the silent city of the dead and their bodies tenderly laid beneath the sod.  I know you will forgive the tear drops which fall as these memories come before me.

I have made mistakes; sometimes I have said things that hurt somebody, but as I look back over my record of forty-three years, I can say I have never deliberately wrought injury to anyone.  I have tried to be helpful, to do what I could to relieve the sorrow and distress of those who suffer.  I have tried to cooperate with all things that would add to three happiness and prosperity of my town, county and state.

I wanted to make the Argus one of the best country papers in Nebraska and have it stand for ________.

At times my judgment has erred.  But with all my failures, I have enjoyed my life with the people of Table Rock and Pawnee County, esteem the confidence they have in me and appreciate the way they have overlooked my limitations and magnified my virtues. If it should be mine to live for many  years yet I could ask for nothing more than that I may always be worthy of this same kindly, friendly consideration from the people of Table Rock and Pawnee County.

Here is a clipping of the actual editorial:

Frank died in 1934.  His widow, Ruby, tried unsuccessfully to run it.  In 1939, she sold it to Lee Chatfield.  He didn't have time to deal with it, and in 1940 wrote to a young sportswriter in Hebron, Nebraska to ask whether he might be willing to come to Table Rock to work for him: 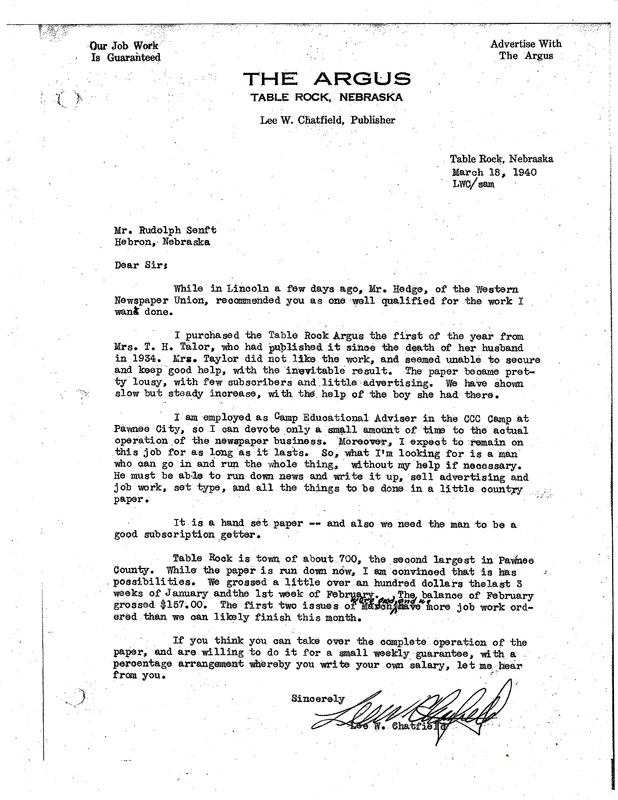 And so Frank Taylor's legacy lived on.

some of frank taylor's articles reflecting his special style

Here was a man who, for decades, hand set a weekly newspaper.  He wrote the articles, he solicited the advertisers, he scrambled for subscribers, and then, every week, he set type letter by letter, and he ran his press. The very same press that is in the Argus Newspaper Museum.
In his writing, he had a lovely, warm style.  He cultivated the kind of home-spun journalism that was called for in those days. He burst with enthusiasm about town spirit.  And he liked to comment about people who came by the office to visit:

During these many years, he wrote a number of articles about community events which went far beyond the "objective" reporting of today's world.  He was a cheerleader for the town.  In an article about cleaning up after the 1920 fire, for example, he reported how everyone pitched in and how much work they did, and he said he did not have the physical strength to get in there with those "big-hearted men" but loved the town spirit.

Once in a while, he mentioned a visitor.  Someone dropped in from out of town, or someone brought him some fresh vegetables from their garden.  Here are two examples from 1920.
February 27, 1920: 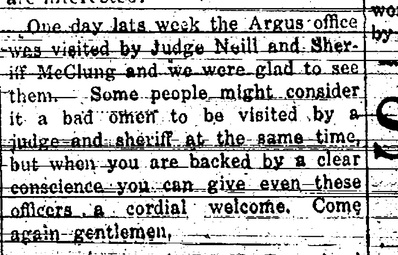 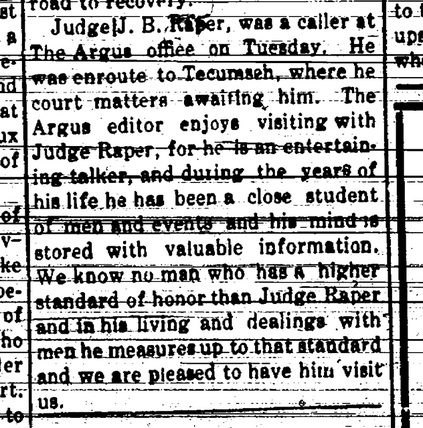