This page is under construction.  As of May 2017, we do not have a list of veterans. A list will be added when secured.  This page is basically a placeholder.

lawrence wilcox - died in action in 1950

Lawrence Wilcox was with Co. B, 1/5th Marine Regiment and temporarily attached to the 1st Provisional Marine Brigade. Larry Obrist explains that this unit was a unique fabrication at the beginning of the Korean  War.

Larry also found a description of that unit's military activity near the Sachon River that was close to the time that Lawrence Wilcox was killed.  We don't know whether Lawrence was involved in the Chindong-ni-Sachon offensive described below, this particular action.  He was listed as Missing in Action on August 13, 1950, and then later identified as killed on September 1, 1950.  However, the report shows what things were like in the part of Korea where Lawrence was serving.

According to the Marine Corps Association and Foundation, "The Marine Brigade fought in three major battles during August and September 1950: the Chindong-ni Sachon offensive, the counterattack at the Naktong Bulge, and the second battle of the Naktong Bulge."  (Lawrence was killed before the Naktong Bulge battles.)   These battles were fought against "a highly determined and ingenious enemy in extraordinarily rugged terrain." At one point, the North Korean People's Army began to aggressively slip into American lines.  They were repelled, but:
Larry Obrist sums up the situation:

History wise, Lawrence Wilcox sadly was one of the young and untrained Marine Corps guys they stuffed early on into battle within six weeks of the North Korean invasion.  They were poorly equipped and undermanned, which put them at a distinct disadvantage.  He may have been hit by sniper or been overwhelmed in one of the human wave assaults.  He died in a far away land for little purpose, one that never really changed the war in any form.

COMMUNITY TO PAY LAST RESPECTS
​TO MARINE WHO DIED IN ACTION IN KOREA
A full Military Funeral will be held Friday of this week for Pfc. Lawrence A. Wilcox, son of Mr. and Mrs. Earnest Wilcox of the Steinauer community, who was killed in action in August, 1950, while fighting with the Marines in Korea. He was 18 years old.

Table Rock business places will close from 1:45 to 3:00 p.m. during the funeral services. 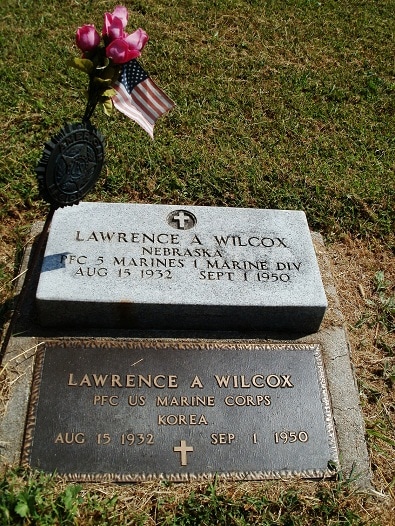 ​10 Years Ago file: Pawnee Republican, article by Carol A. Sisco- Lest we forget...Forgotten soldier, forgotten war. Lawrence Wilcox was just getting a good start at life when suddenly it was over. He ran out of tomorrows at an age when most of us feel that we finally own our todays and will never run out of tomorrows.

Lawrence signed up for the Marines in the late 1940's. When Lawrence returned to duty at the end of leave, he was sent to Korea. He arrived in Korea on August 2, 1950. Seventeen days after his 18th birthday, he was killed on the Inchon Landing of Korea.
View My Stats