Back to other family pages
Photo collection of Mike & Linda Warner 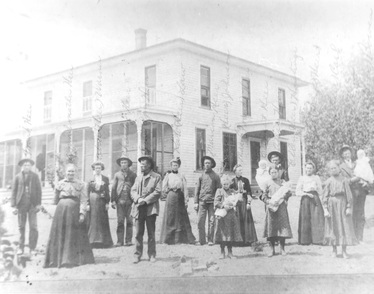 The 1920 census cites his arrival in the U.S. as 1879, with naturalization in 1881. However, an ancestry faily tree leads to a travel record showing his first arrival on June 5, 1867 on the ship E. F. Gabain, coming from Bremen, Germany to New York from Bavaria; he was about 24. 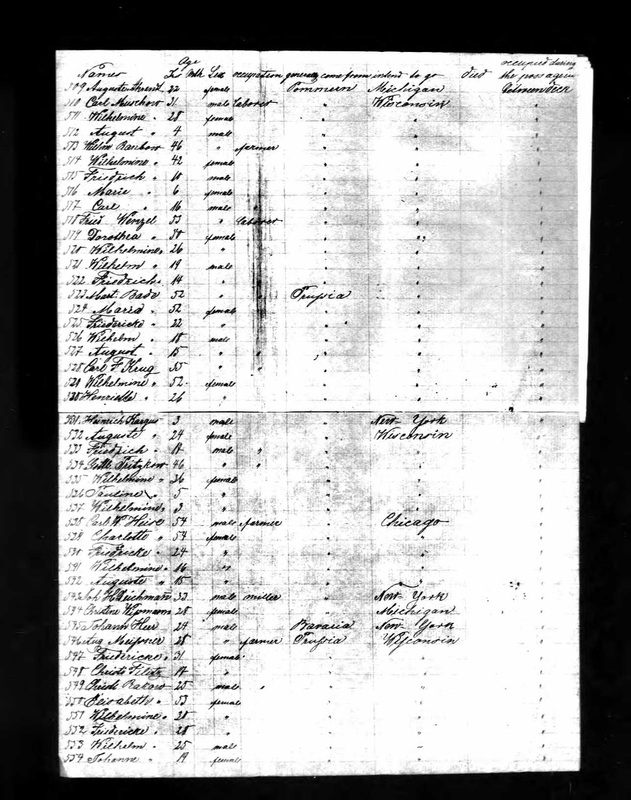 That tree lists two additional arrivals in 1868 from Hamburg.  As was not uncommon, he must have returned to Germany a couple of times before settling here permanently.

The Chris Heer public family tree on Ancestry.com .
It identifies Mary Buck Heer as the mother of the first two children, John and Katherine.

It identifies Martha McNeal as Ben's second wife, the marriage taking place in Pawnee City on September 8, 1873.  This is consistent with the obituary of Ben's son Alois which designates John and a sister Kate has half brother and sister to Alois and the others.

Another public family tree on Ancestry.com ("Attlesey-Vogel) identifies Ben's third wife as Anna Belle Hansen (1866-1932), to whom he was married on June 30, 1914.  The 1920 census shows him living with wife Hanna and two step children, Melba and Victor Fellers. 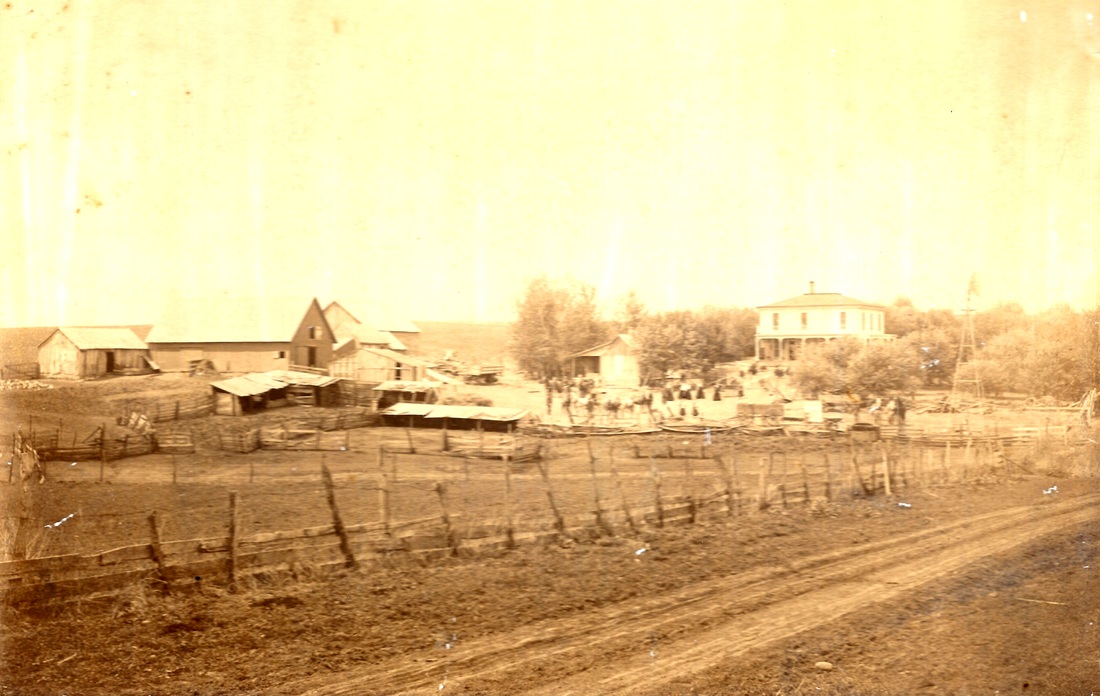 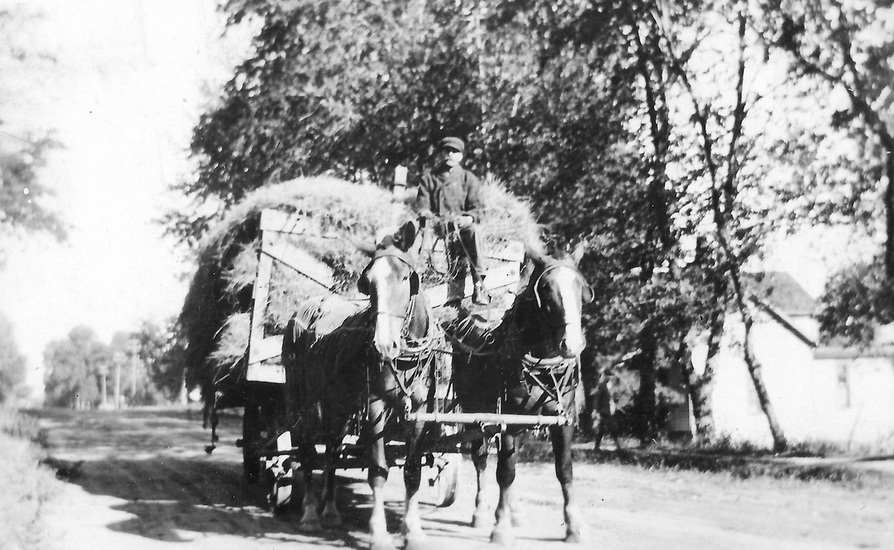 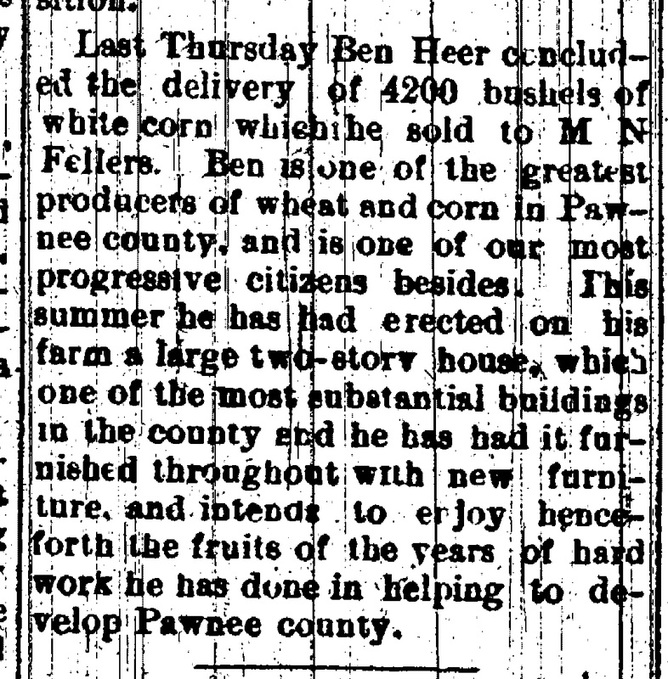 October 20, 1`898
After the Ben and his wife moved to town, they lived in the brick house catty corner from the Christian Church. Here they are in Photo 870. 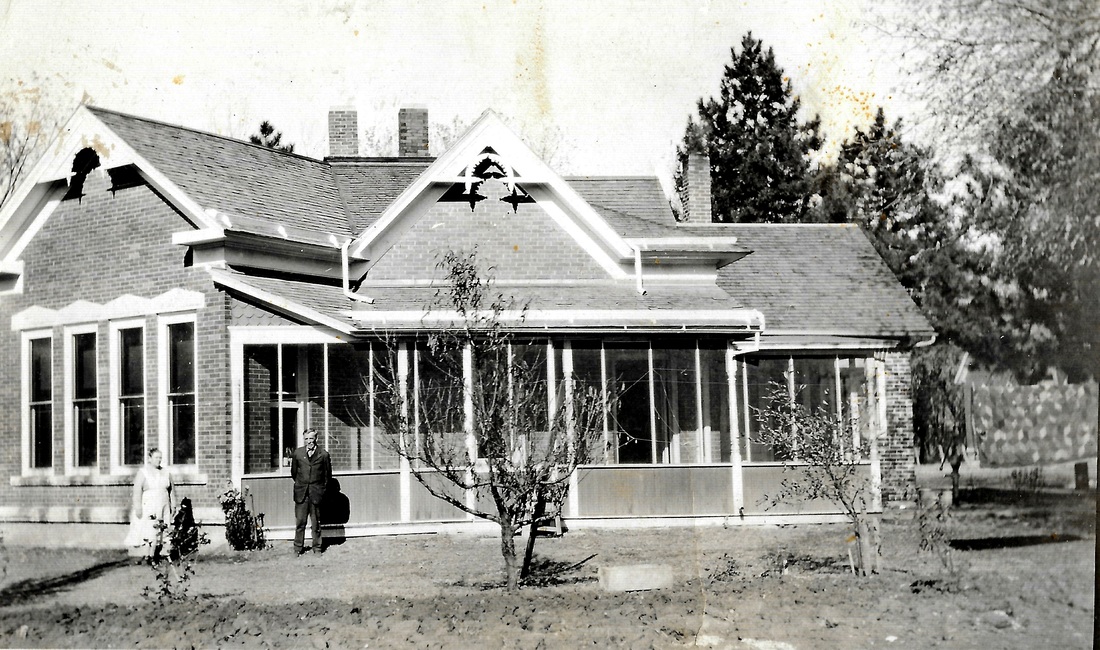 ​According to descendant Brad Bowen, after Martha died Ben remarried.  He is on the 1920 federal census, married to Anna, with adult step children Melba and Victor living with them.  Here is an excerpt from the lines about his family. It notes that he came to the United States from Germany in 1879 and was naturalized in 1881. The 1910 census shows him still with Martha. 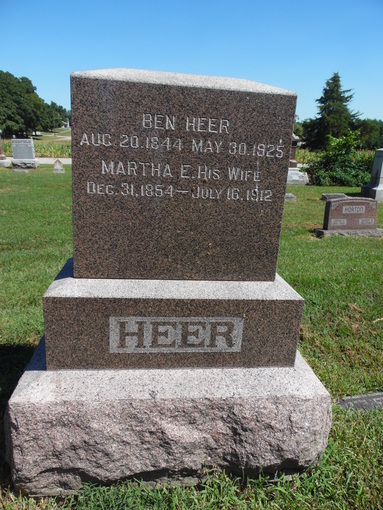 Ben and Martha had 11 children, according to the obituary of their second son, Alois (Lou).  There are 9 adults, 3 young people, and a toddler here besides Mr. and Mrs. heer. 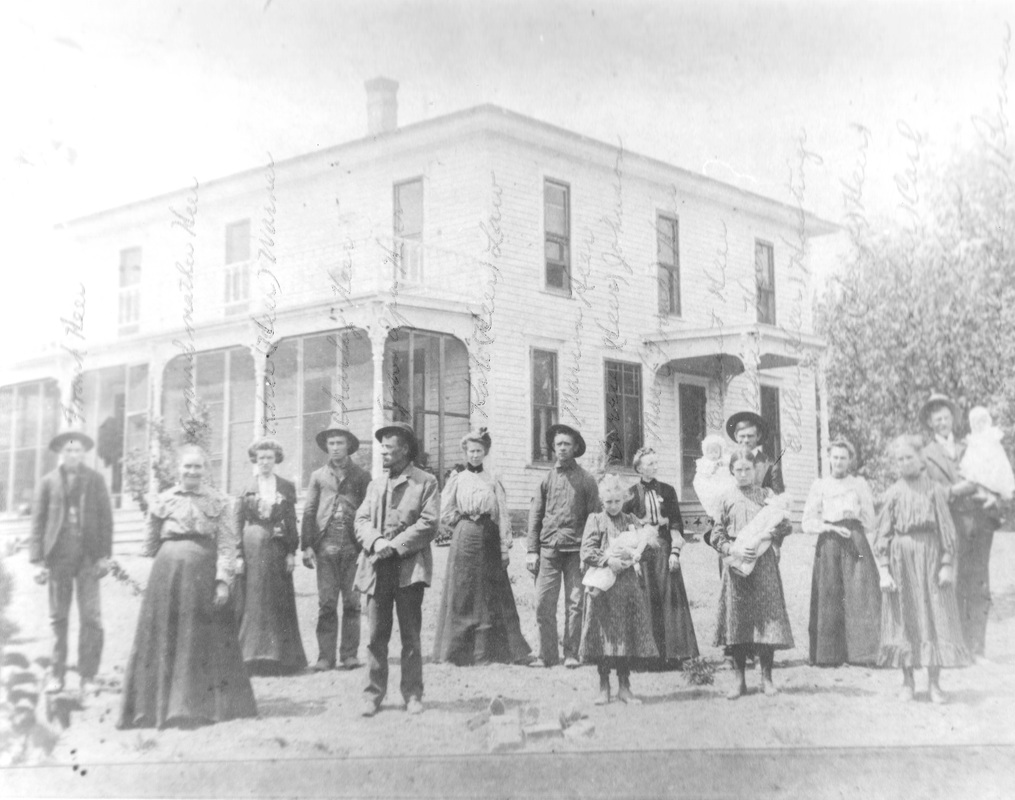 The Heer family at the Heer farm northwest of Table Rock.  At the bottom “Taken in the Fall of 1902.” Names are written above each person.  Frank Heer, Grandmother Heer, Alice Heer Warner, Charles Heer, Grandpa Heer, Kate Heer Law, Marion Heer, (the little girls: (Annie?) Heer Johnson;  Mae _surname here_____ Heer, baby Ernest Heer held by A_____ Heer, girl holding doll to the right is Ellen Heer (Hastings?) & to the right is uncertain. The young girl on the far right probably Nancy Heer Carl (the handwriting is somewhat unclear as to which person it is referring to; she would have been 14), Ma___(Maude or Martha?), (John?) Heer,  and baby (Cecil?)Heer Bowen.” Photo 673. 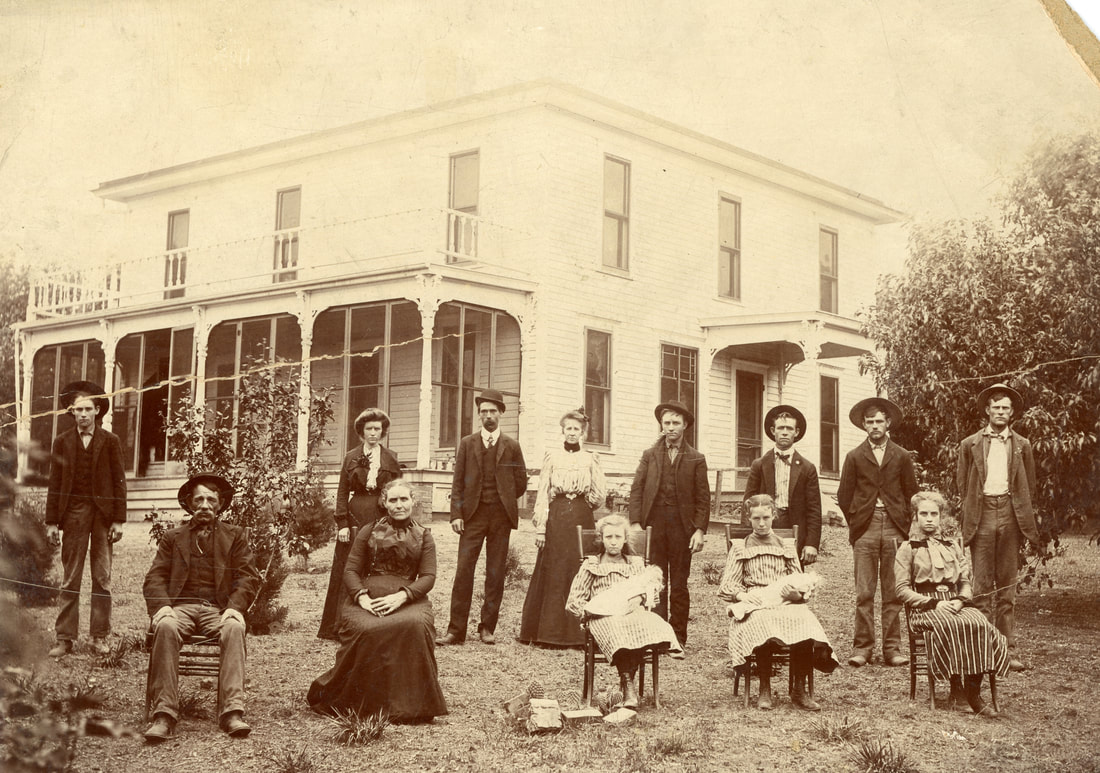 there were five heer brothers 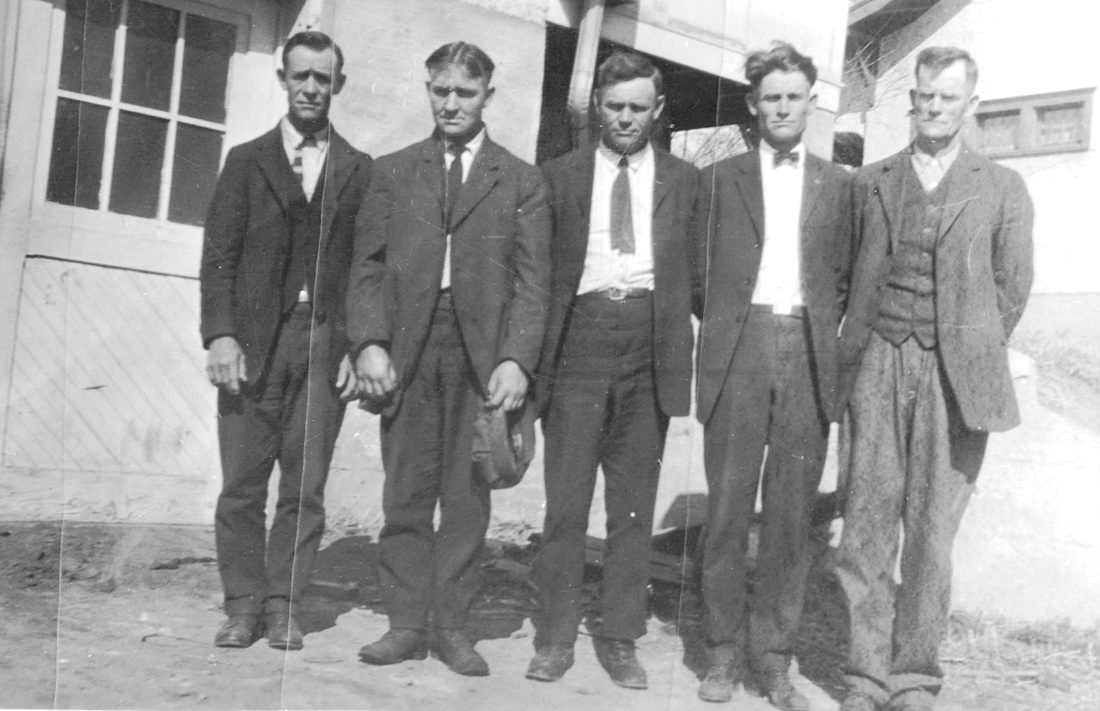 the children of ben heer

Nothing is known of Katherine, known as Katie other than that she and her brother John were the children of Ben Heer and his first wife Mary .

John was Ben's child with his first wife, Mary.  After Mary died, Ben later married Martha McNeal and the remainder of the children were born. 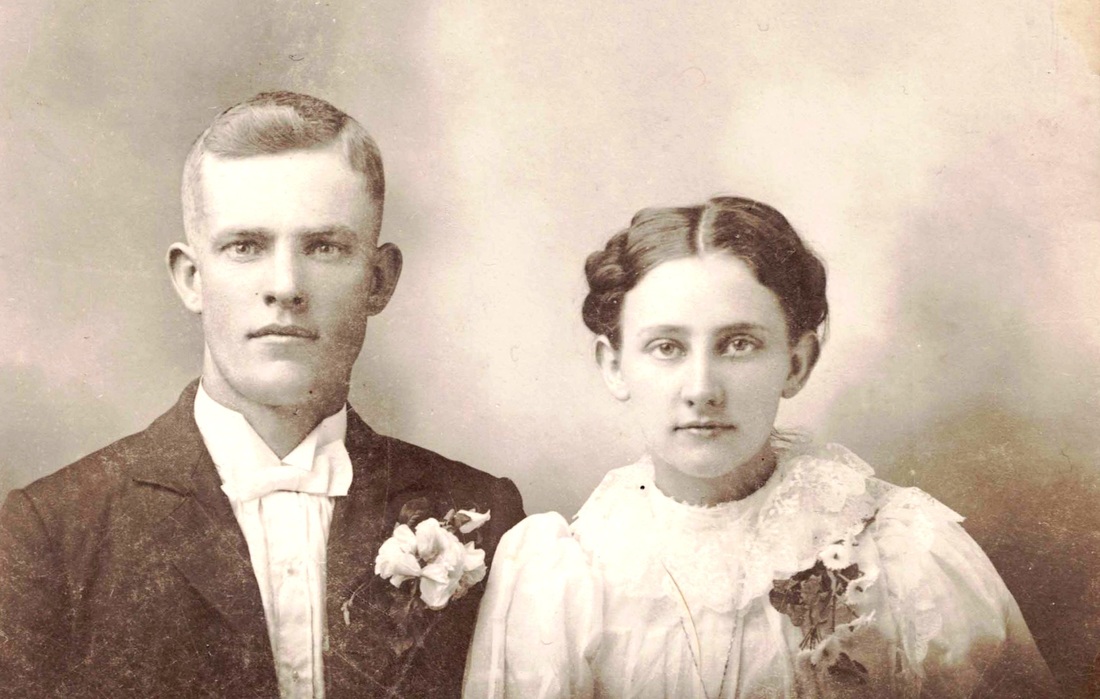 1899, John Heer & Maude Hays. Photo 1746.
Maude was pregnant a number of times, but the babies were either still born or did not live long; four babies are listed on Findagrave.com but there may be others.  The only child to survive was Cecile (known as "Cecil"), who lived to be 90 years old.  Cecile married Stanley Bowen, and their grandchildren still live in the area today. 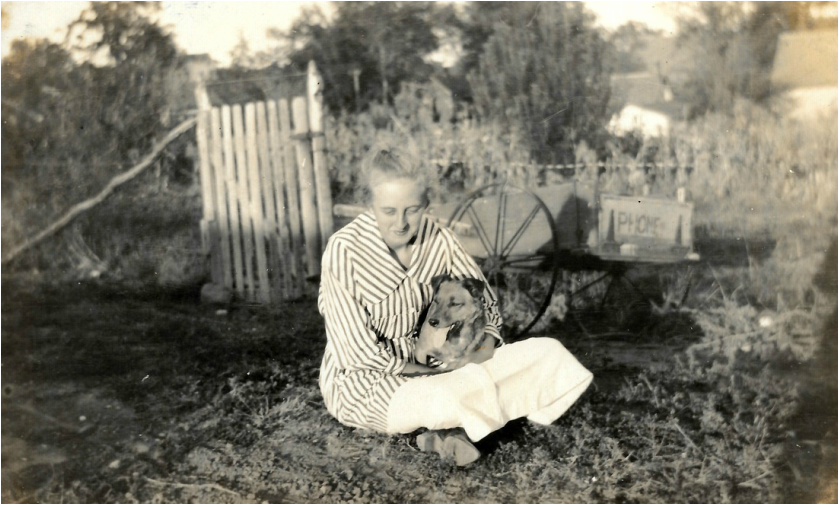 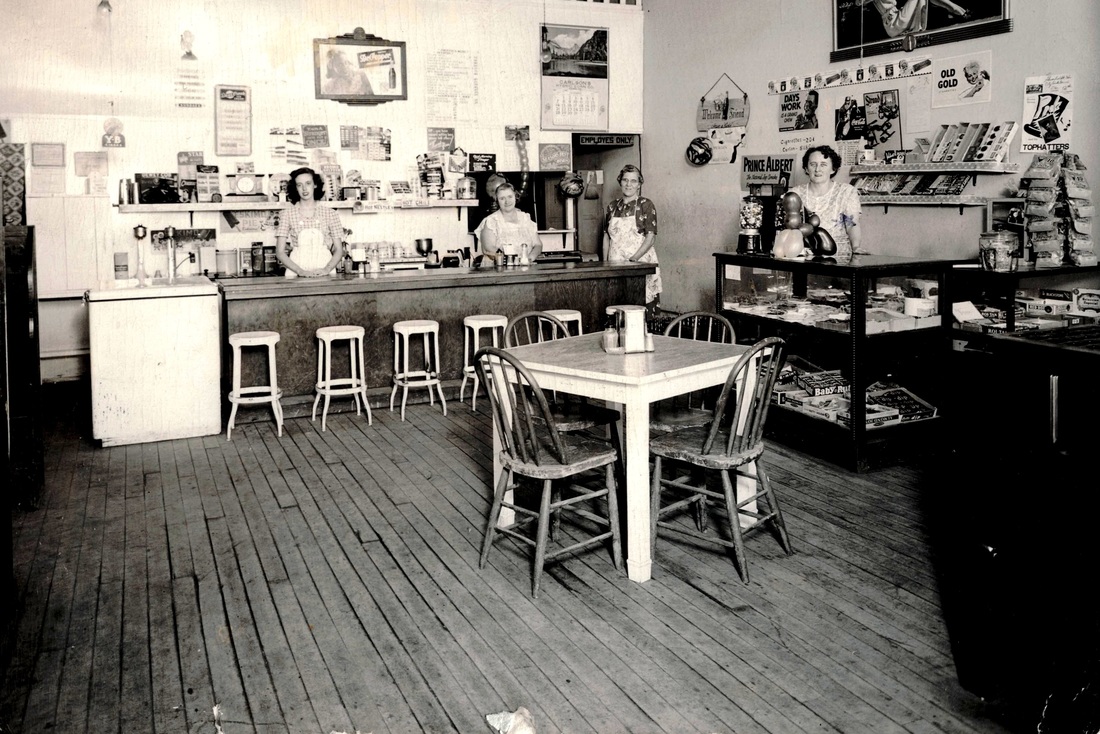 Johnny's Cafe about 1948, according to Brad Bowen, whose family this picture it is. That's his grandmother Cecile Heer Bowen at the far right. When posted on Facebook, it was suggested by some that the woman on the left is Irma Kalina Penkava, but I haven't tracked that down yet Photo 1748. Thanks to Brad for sharing this picture. 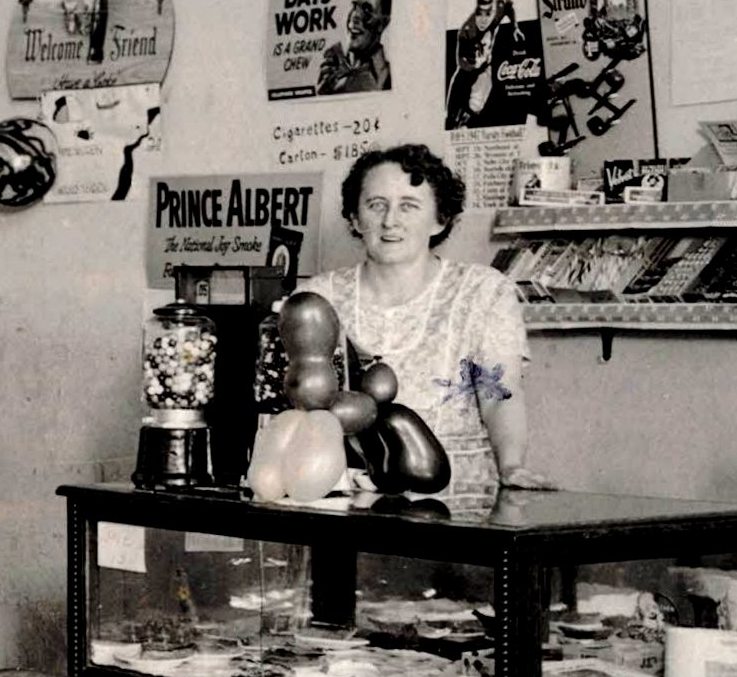 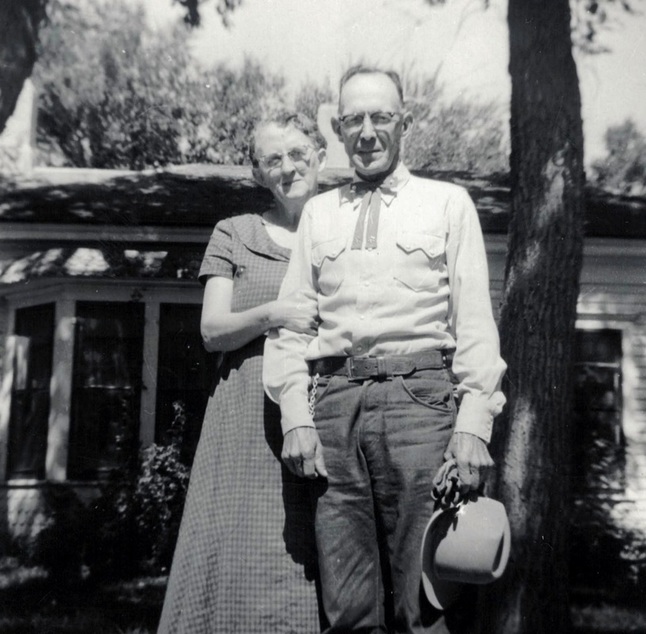 Cecile & her husband Stanley Bowen, in 1957. Photo 1758, thanks to Brad Bowen for this family picture. 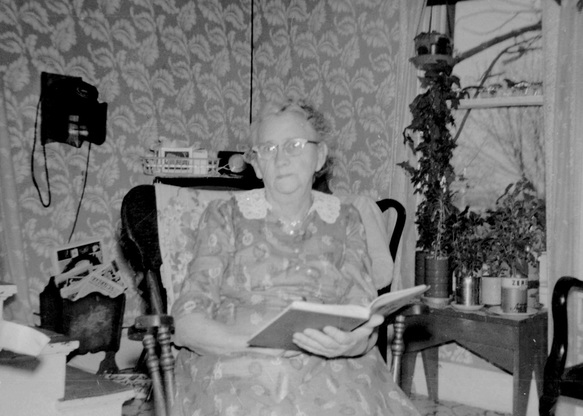 Maude Hays Bowen at home, age 77. Photo 1763. Thanks to Brad Bowen for this family picture.

John and Maude and their chilren, including daughter cecile, are buried at the table rock cemetery

Nothing is known of Ben's other children.