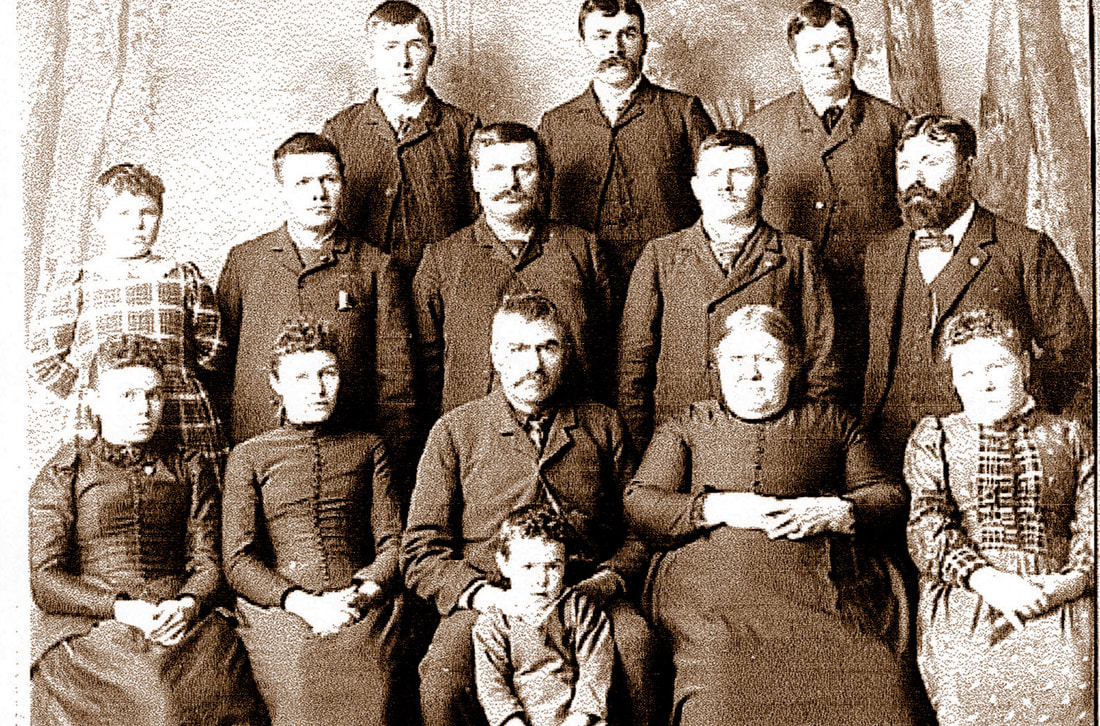 Joel was born in Rome, New York in 1837, and emigrated to Illinois, where in 1859, he married Rosanne Pattison.  They had their first children there, went to Rulo, then came to Table Rock by 1871 where they had many more children.  They had a total of 13 children born between 1860 and 1888).

Joel and Rosanna's oldest child was William H. Harrison, who would become a proprietor of the Table Rock Argus.  Which is he in this picture? We don't know.  There is a picture of an older William Henry Harrison below to compare with.

Their other children were Joel Harrison, Jr., George Harrison (died at age 2), Franklin A. Harrison, Charles E. Harrison, Mary Alice Harrison, Thomas J. Harrison, Herbert Joseph Harrison, Martha Harrison, Elliot Harrison, Edith Harrison, Eugenia Harrison, and Carrie Maude Harrison. Carrie, the youngest, was also the last surviving member of the family -- she died in 1981. She is probably the little girl in front of Joel; she was 8 years younger than her next oldest sibling.   There were 12 siblings who survived to adulthood and there are 12 children here.

The photo is undated but you can estimate its age based on the 1888 birthdate of the youngest child, Carrie.

By 1900, Joel Harrison had moved away. Joel died in 1907, Rosanna in 1910. Thanks to the Janis Piczczek tree on ancestry for this information. 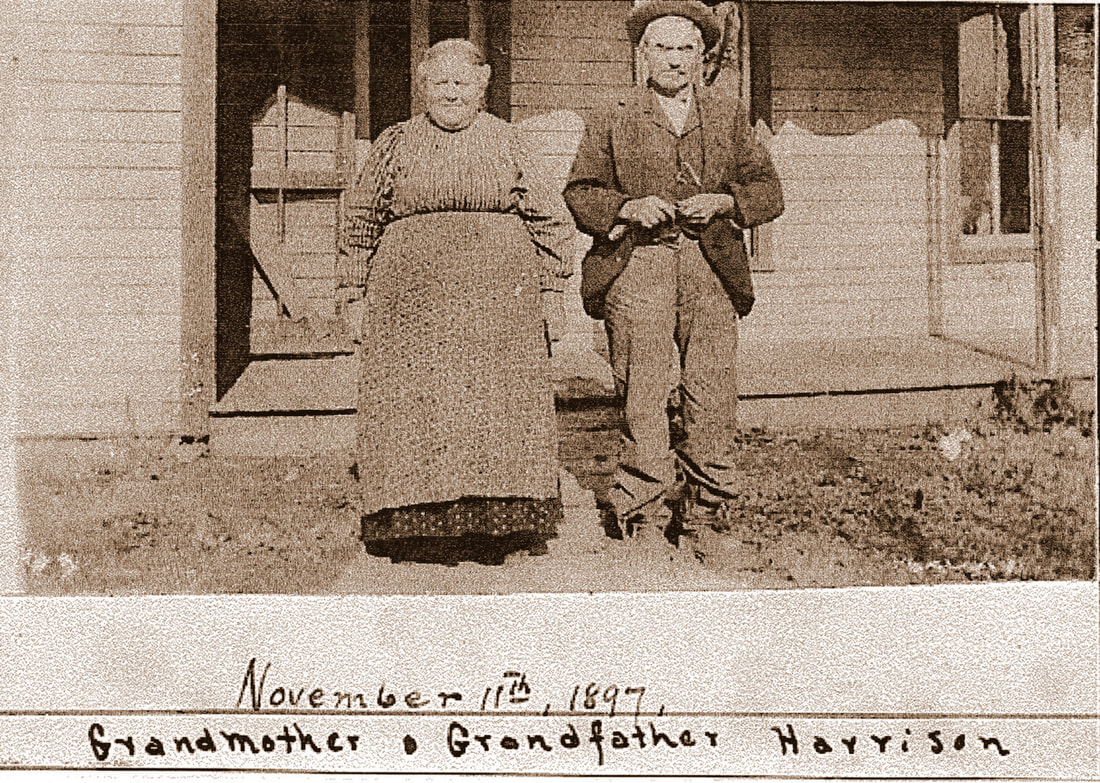 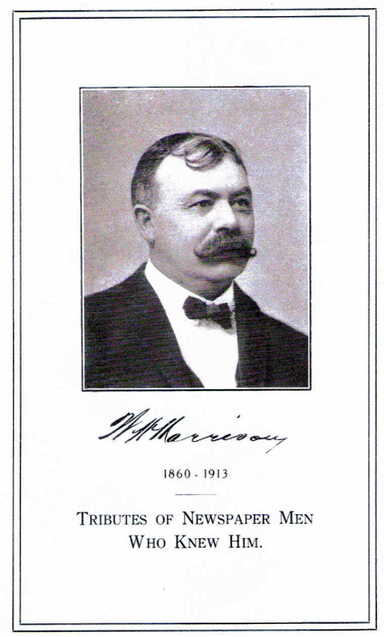 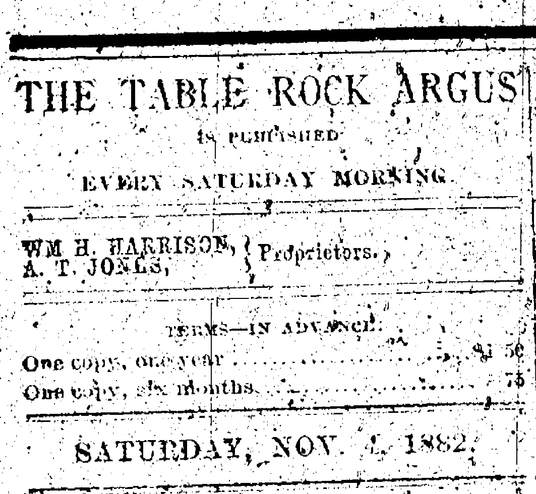 November 4, 1882 Argus. His obituaries do not mention his in the paper; either he did not take an active part in it (likely) or his involvement was brief (he moved away in 1884).
Below is a photo of William H. Harrison shared by hipplanesrnchr1 on Ancestry.  William's  obituaries say he married Emma Jones "daughter of a pioneer."  Her parents were David and Margaret Williams Jones, who came to Table Rock in 1860 according to the
Ancestry family tree of hiplanesrnchr1.

His obituary from the November 17, 1913 Nebraska State Journal follows below the photo. 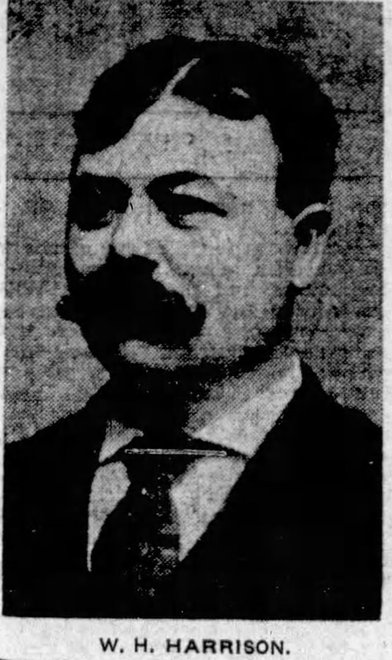 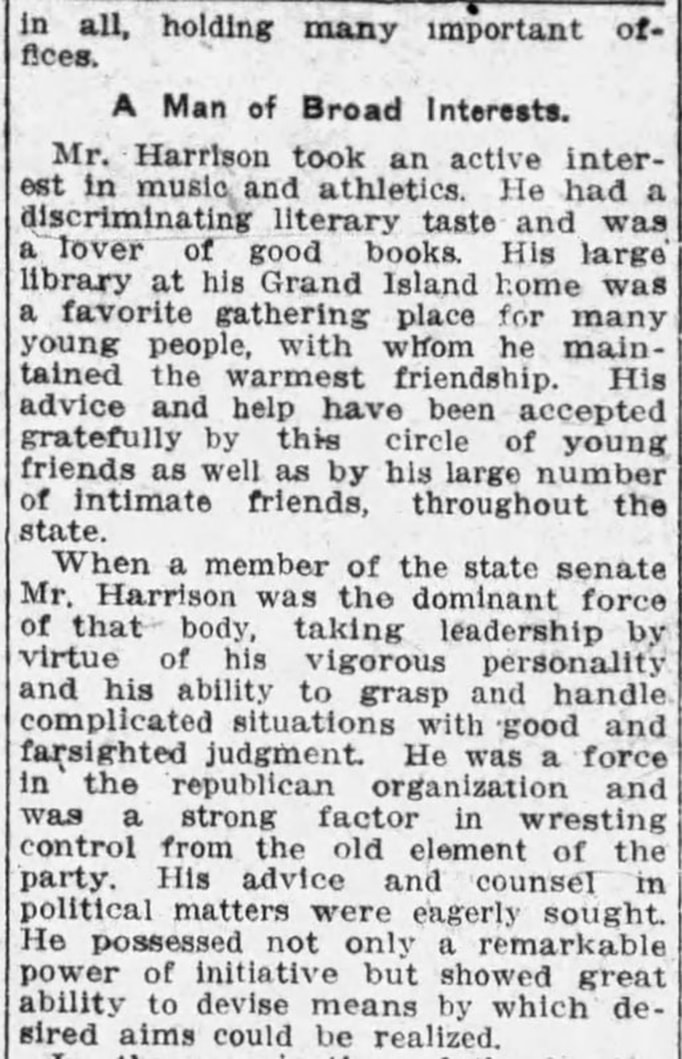 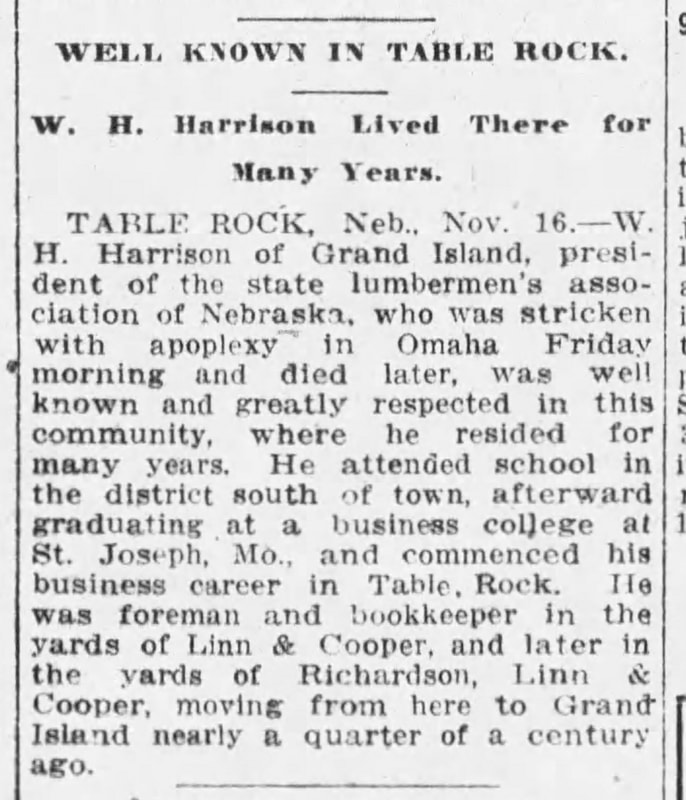 Joel is buried in the Grand Island Cemetery. 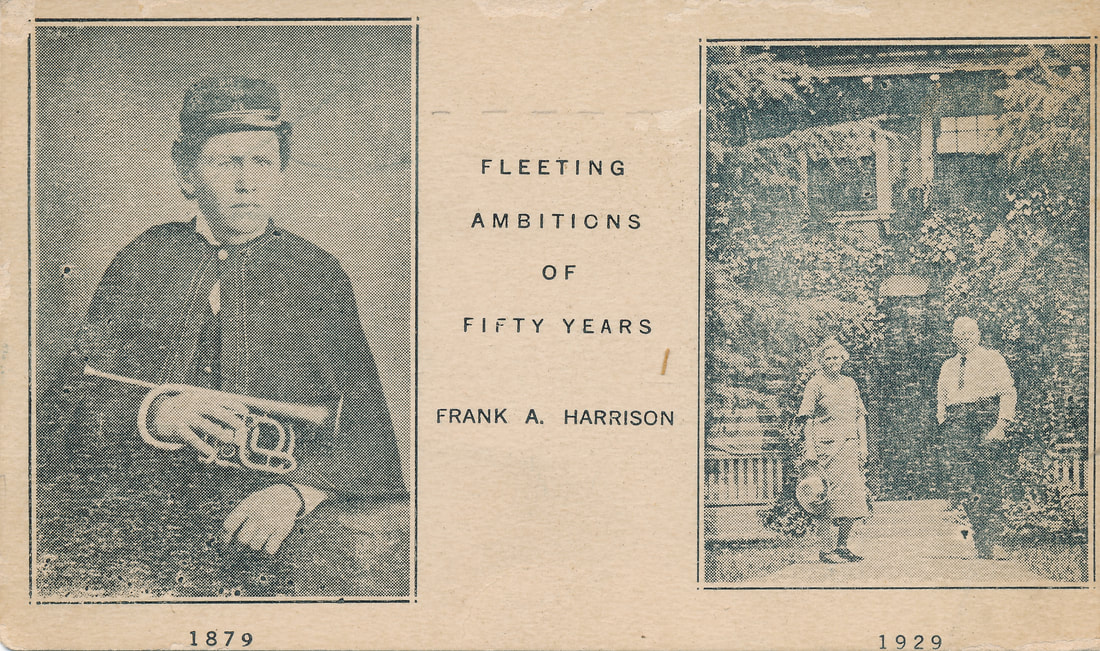 Cover page of an autobiography which we do not have. He looks older than 8 in the photo yet we are pretty sure it is the Franklin A Harrison who was the son of Joel & Rosanna Harrison. If we find the autobiography, we will know.

According to Linda Secrist, a descendant of Molly's brother Thomas, Mollie married Albert (Bert) Heywood.  After Mollie's death, Bert married Mollie's sister Edith.   (The Heywood-Harrison connection had already been established by Thomas Harrison's marriabge to Katie Heywood.)  Mollie died at age 28; she had been an invalid for two years following the onset of paralysis. She is buried at the Grand Island Cemetery.

Mrs. Mary Heywood, wife of A. L. Heywood, daughter of Mr. and Mrs. J. D. Harrison of Miller, and sister of W. H. Harrison of this city, died this morning at her residence, corner Tenth and Pine, after a long illness. Mr. and Mrs. Heywood removed to this city about two months ago having formerly conducted a farm near the city. Mrs. Heywood was taken with paralysis some time ago, and has in fact been an invalid for some two years. Death took place this morning at two o'clock.

The mourning husband and daughter, parents, sisters and brothers of the deceased have the sympathy of a host of friends. Of the large family, all of whom have grown to manhood and womanhood, it is the first death and the pangs it has brought are therefore perhaps more severe.

The deceased was the wife of Bert Heywood (Albert L. Heywood), and was born and raised on a farm near Table Rock, where she had a large circle of acquaintances, who mourn with the relatives in their bereavement. 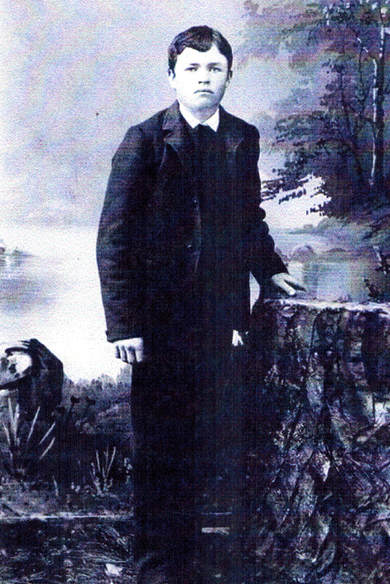 Thomas J. Harrison, a family photo shared by Linda Secrist, who is Thomas's great granddaughter. Photo 3204.
Thomas married Katie Heywood in 1893.  Katie's father Asa E. Heywood was one of the first settlers in Table Rock, and according to his obituary in the Argus was a "conductor" on the Underground Railroad. 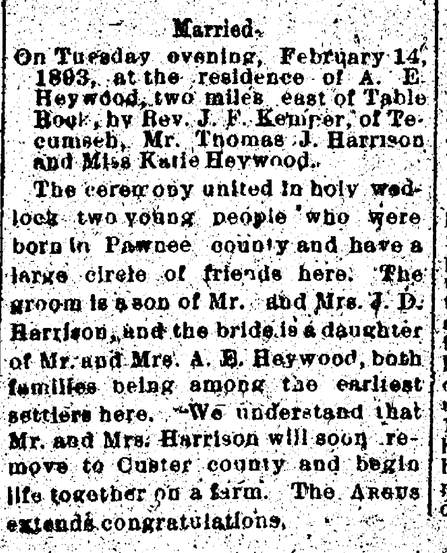 Joel Herbert Harrison married Nellie Samson (1876-19630, daughter of Russell & Emmeline Samson, who were amongst the very earliest of Table Rock settlers.  Both Herbert & Nellie are buried at the Grand Island Cemetery.

The family moved away in 1900 and little is known of them other than that after Mollie died, her sister Edith married Mollie's husband Bert Heywood.  Information about the family can be found in Ancestry and on the FindaGrave database.
View My Stats