Go back to family page index

He marries Madie, and he lives a long life, until 1971, when he dies at age 85. The symbol is for the International Order of Odd Fellows.  Was his father? Don't know. 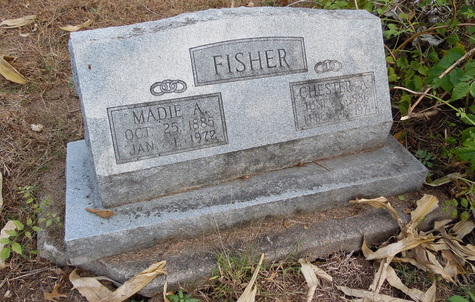 1887 - Jesse Fisher, dealer in lumber, sells something to judge marble 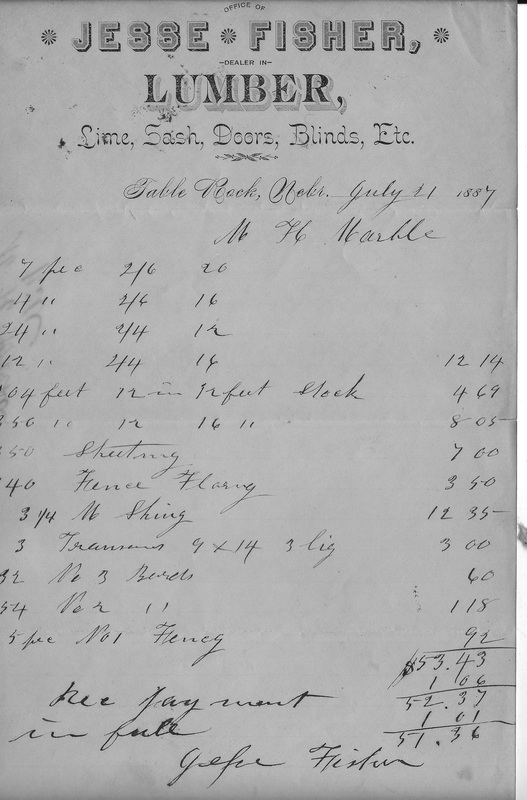 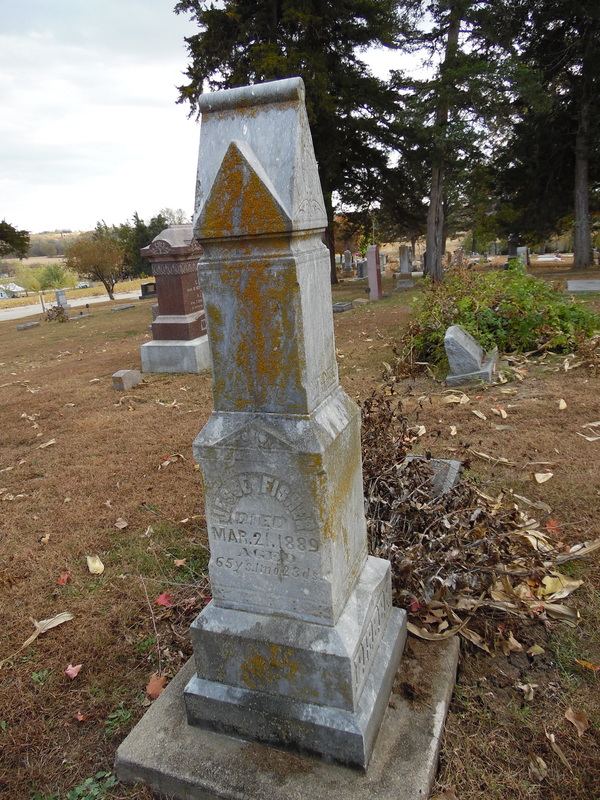 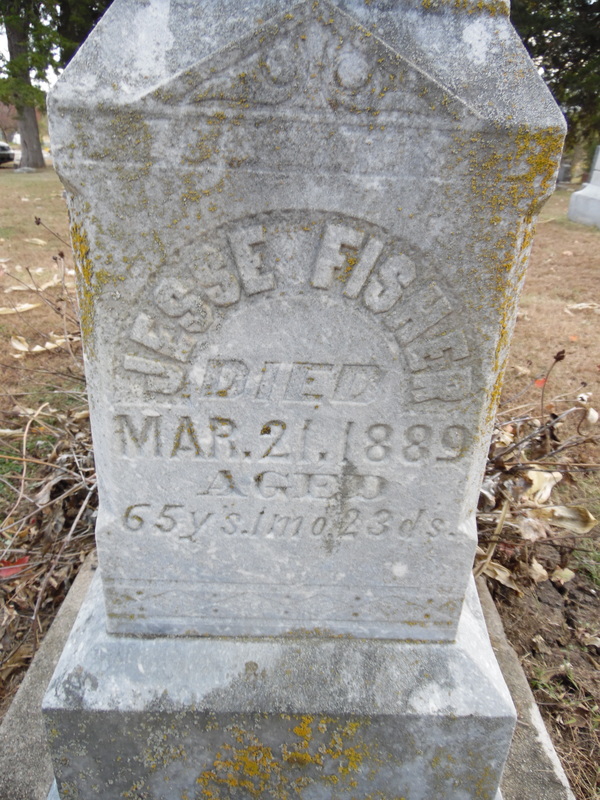 Buried with him and sharing the same tombstone is Emily Fisher, presumably his wife, as she was within a year of Jesse's age. She did not die until 1917, living to age 90.

﻿Ralph C. Clinton, was reportedly born in Tazewell County, Illinois in 1868, married Julia Carlock in1888, and died in Idaho in 1939.  He and Julia are buried in the Table Rock Cemetery, as are their sons Everette and Ralph, Jr.  Everette died at the age of 18 months.  Ralph, Jr., died at 22 in World War 1.  They had two daughters who lived to be old, the first and fourth children.

Ralph and Julia obviously lived in Table Rock at some point in between since their son Everette died here in 1892. Their ties were deep, as they were living in Idaho when Ralph, Jr., was killed in the war, yet brought his body to Table Rock. And they themselves were brought back to Table Rock.

1897 - LAWRENCE FISHER (KNOWN AS "WEDDY") AND LUCY MITCHEL GET MARRIED 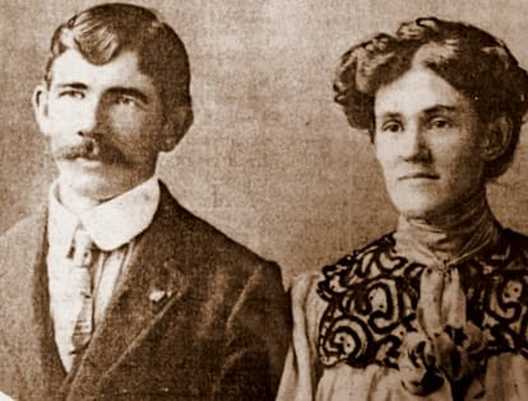 This wedding picture from a Furnas County history book was shared by Cheryl Haakensen, along with the text history.  It is very interesting, relating that Weddy and his brother had bicycled from Pawnee County"to the open prairie country of Furnas County to see their other brothers, George and Jess Fisher, who had already settled there."  A few years after their marriage in 1897, Weddy and Lucy moved there, too. The whole extended family came to rest in Wilsonville. 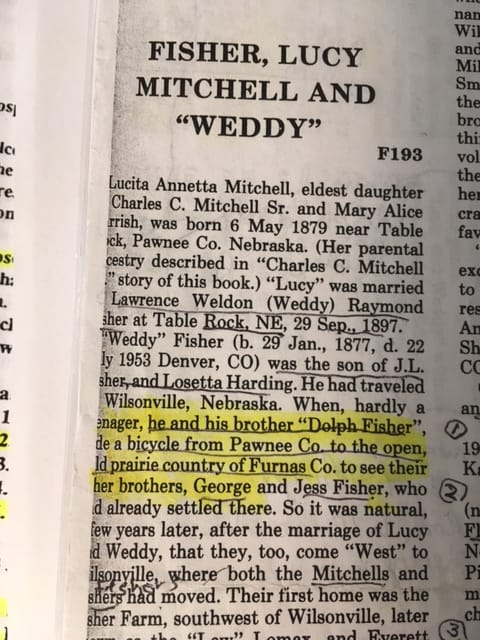 1904 - a gathering of friends with chester fisher and "mrs." fisher

This is Photo 1823, noted as being taken circa 1904.   It is a gathering of Purcell family and friends. It is was shared with us by Terry Hunt Korell, a Purcell family descendant.  There is a young Chester Fisher and a "Mrs. Fisher," presumably his mother.  Perhaps this is Emily Fisher. 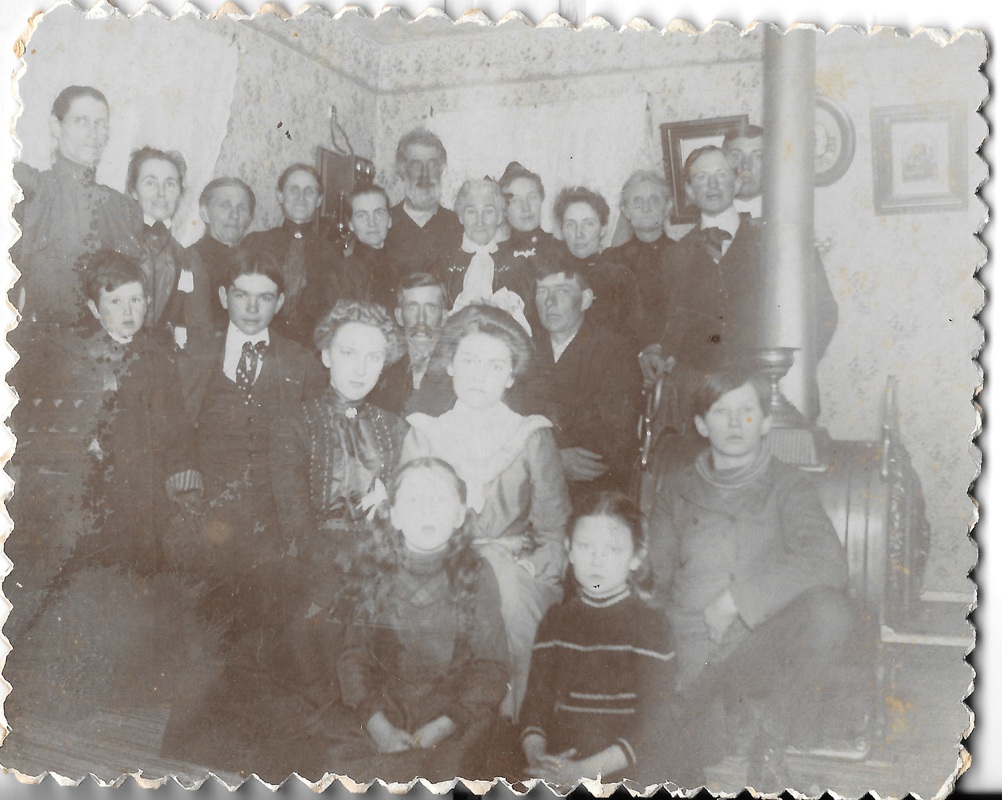 This is Photo 1823, shared by Purcell family descendant Terry Hunt Korell. it is a gathering of family and friends.

When? - chester fisher is in the table rock band 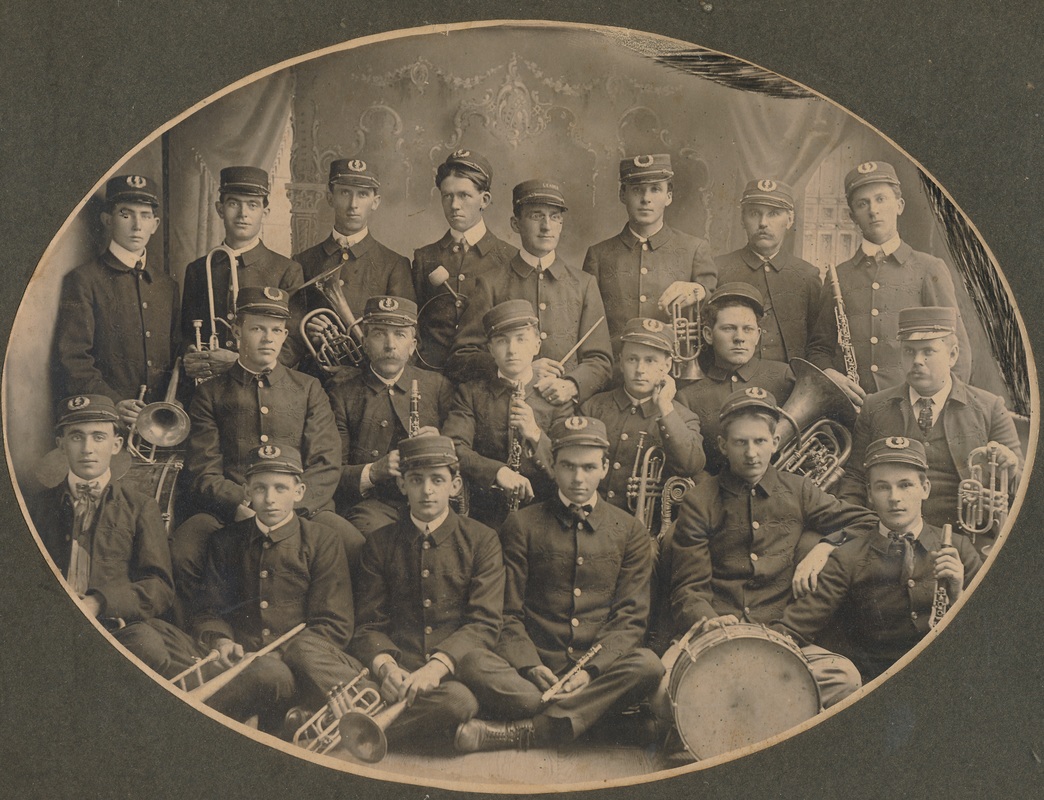 This great photo is Photo 163.  It is undated.  Chester Fisher is identified as being in the front row, the 5th man from the left.  His hand is on a drum.

The telephone operators were advertised as "hello girls" in those days. Here are Chester and some friends visiting hello girl Erma Mitchell at the telephone office. The office was above the bank.  This is Photo 196, Erma Mitchell with Chester Fisher, Mylum Purcell, & Lou Billings.  Labeling on the photo is not clear about who is who, but that looks like Chester on the left. 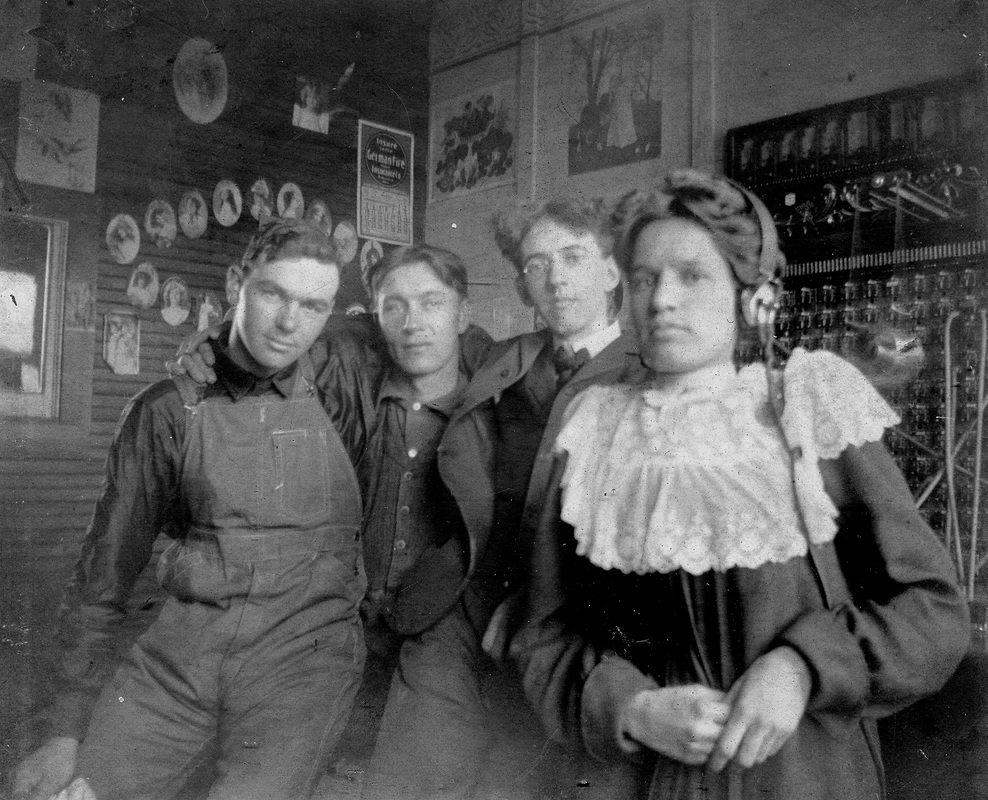 The farm phone was 13.  No house phone was listed.  Follow the link to the 1913 telephone book, lots of stuff besides phone numbers!
1913 Phone Book

He's the man with the drum in this photograph taken in front of the Moto-Drome that was apparently set up in Table Rock. The photo is dated 1915, Photo 177.

Names are crossed out, and redone, apparently there was a discussion about who was who when this photo was donated. This is the final result.  Front row: Joe Tomek, Frank Tomek, Jess Vondrasek, Emil Rabstejnek, Arnold Petrasek, Earl Irwin, and, withy the drum, Chester Fisher. Back row: John Tomek (one comment says Fred), Tom Krofta (one comment says Rudy Kalina but it is Tom Krofta), Art Krofta, Charles Rabstejnek, Ralph Cotton, Charles Klaine, Otto Vondrasek. 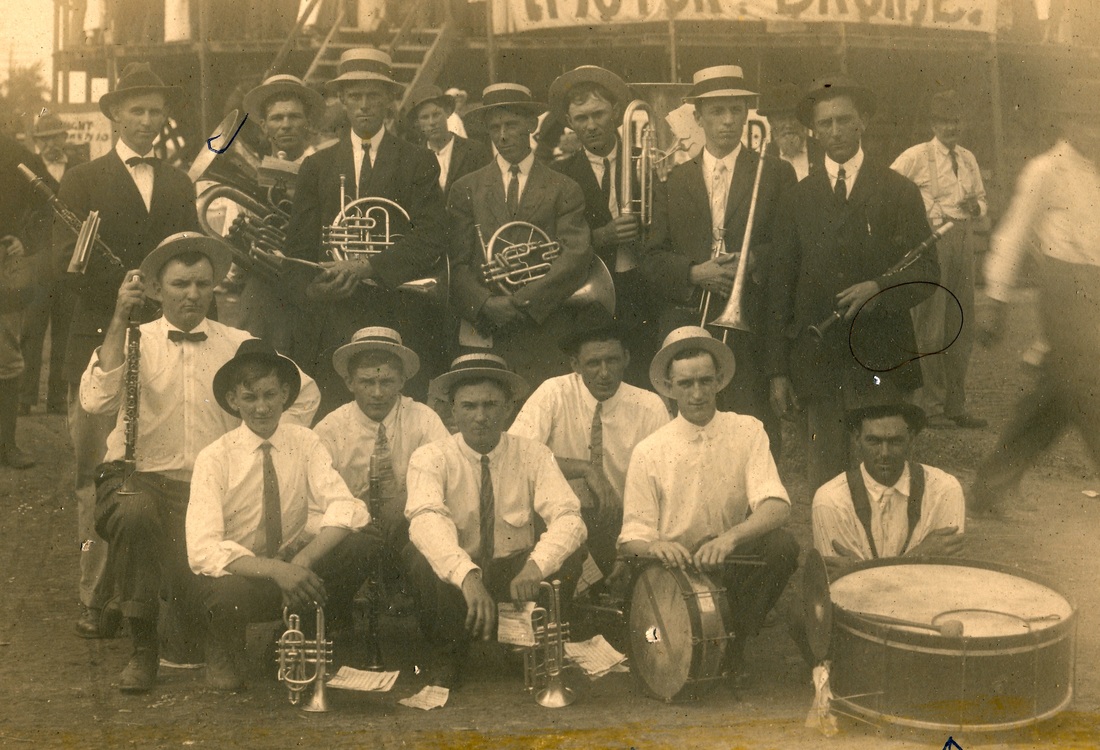 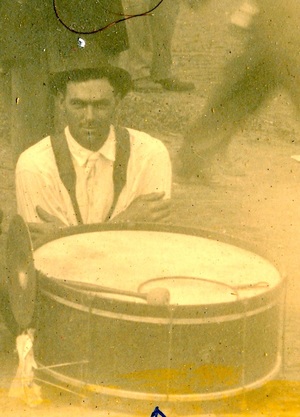 She is buried with her husband.  She was 90. 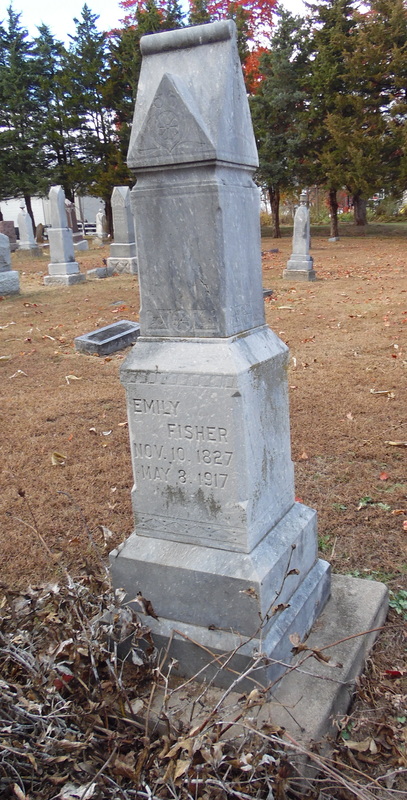 Ralph died on a "mercy ship" (transporting the sick and wounded" of the "Spanish" flu, which is a flu that reportedly actually originated out of Ft. Riley, Kansas. 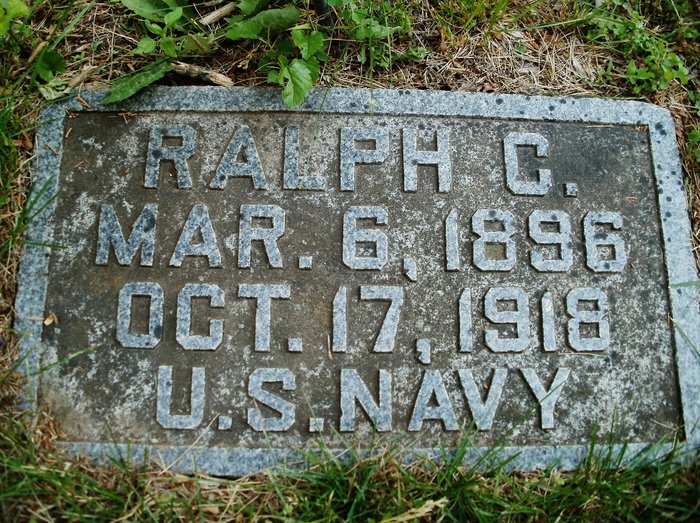 1921 - memorial services are held for three who died in the "late war," including Ralph fisher, jr. 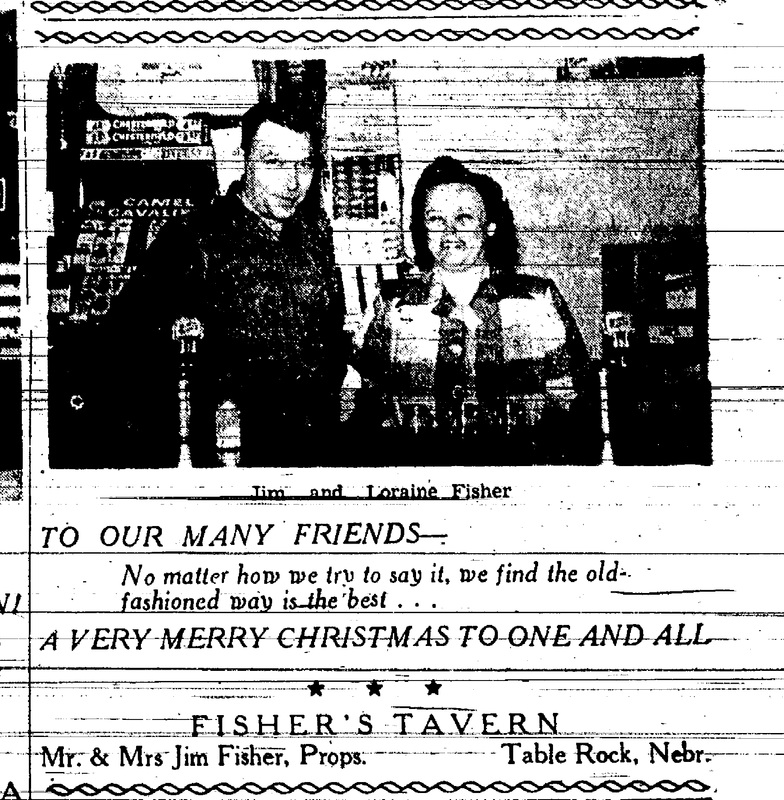 This Fisher family is related to the Wilcox family.  Historical Society member Earl Wilcox of Table Rock brought a nephew Larry Fisher to visit the museums in the summer of 2014. 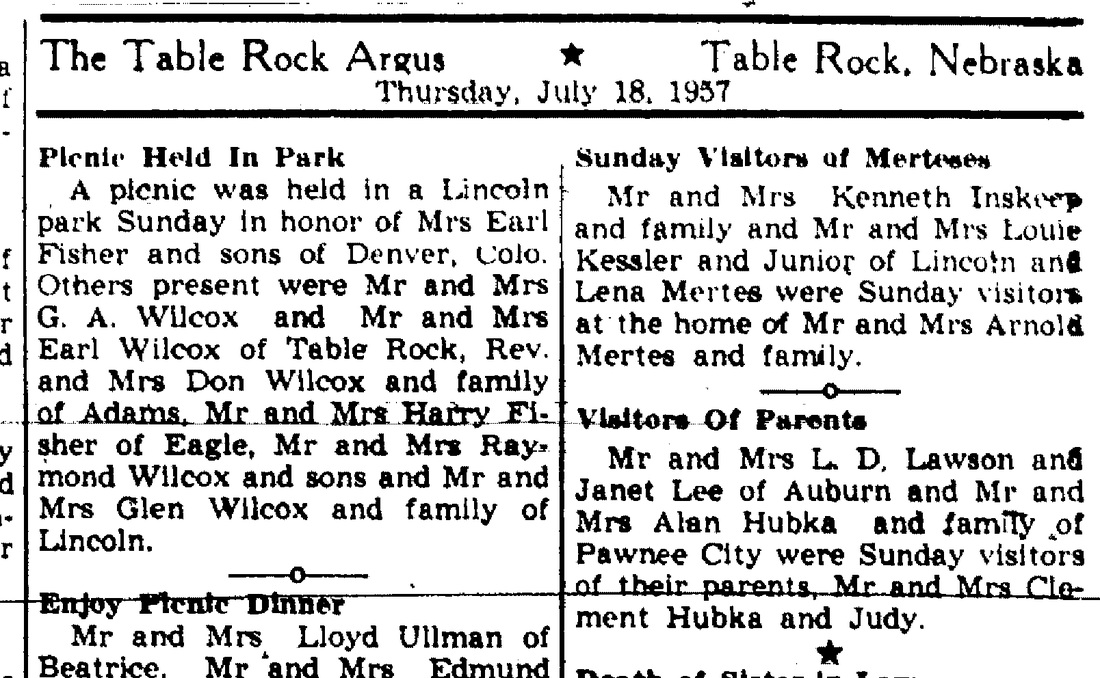 On a hot summer afternoon, Earl Wilcox brought two of his nephews by for a visit.  They had apparently all attended a Wilcox reunion. One was Larry Fisher of Idaho. His mom graduated from Table Rock in 1937. Larry's Fisher side probably has no connection to Table Rock, but Larry is nevertheless a Fisher, so I include him on this Fisher page to honor his visit!
While here, Larry and his cousin helped crank up an old Victrola that was sitting backstage at the Opera House. There is no electricity in that building, but for a while there was music.
View My Stats