This picture comes from Holly Blazier, a picture from her family collection. 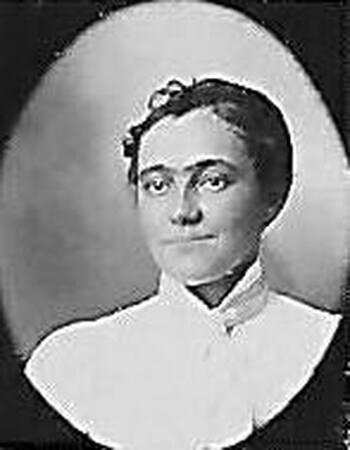 Photo 3993, shared by Marilyn Smith, whose husband David is a grandchild of Madge

A photo with Madge Chambers and an unknown other, shared by Marilyn Smith, whose husband David is a grandson of Madge's.  Photo 3991.  It was taken in Pawnee City in March 1897 according to an annotation on the border of the photo. 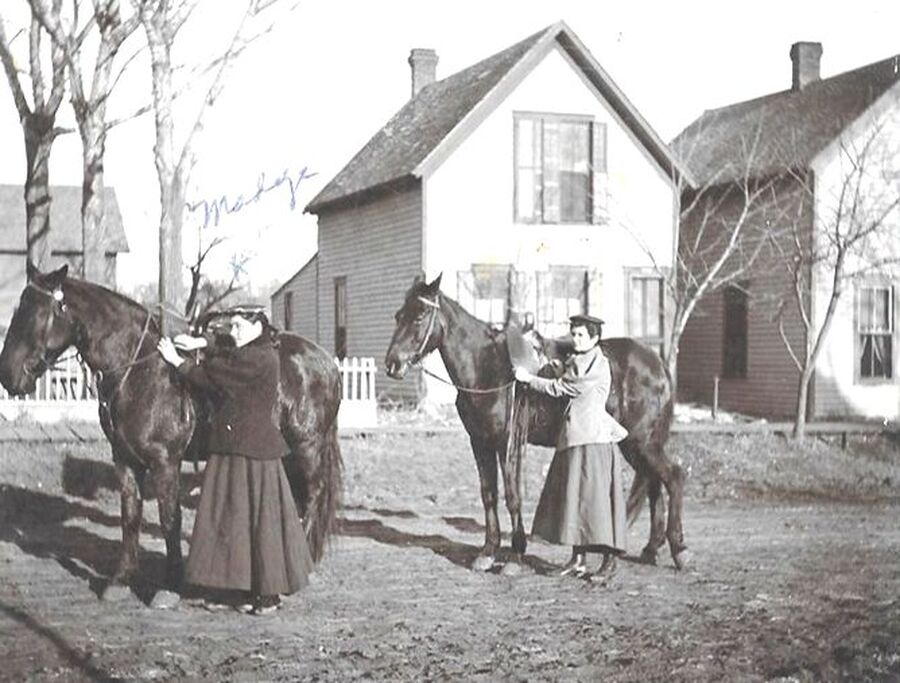 ​From Marilyn Smith, whose husband is a descendant of Madge Chambers, who was his grandmother, comes this poignant set of pictures with a note on the back about his memory. This little Frankie in curls is a little boy, dolled up as was the custom of the time.  Madge was born in 1880. Her mother died in 1881. 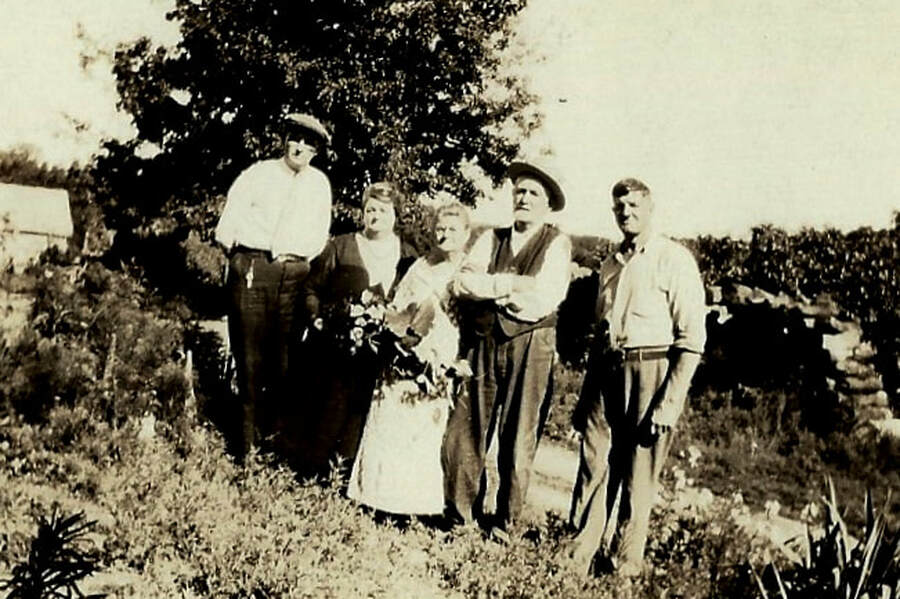 C. W. & his wife Ida Kenner Chambers and three of their five children: Ward, Ruth, and James.  (Chester and Harman are not in the picture.)
His friends called him Charley, but he used C. W. when he wrote, and those who did not know him well apparently also called him C. W.

Chambers liked to play checkers, he liked to write about history, and he usually had an opinion about something. Oh boy, did he!  And the newspaper editors up in the Capital City thought enough of them to publish them! 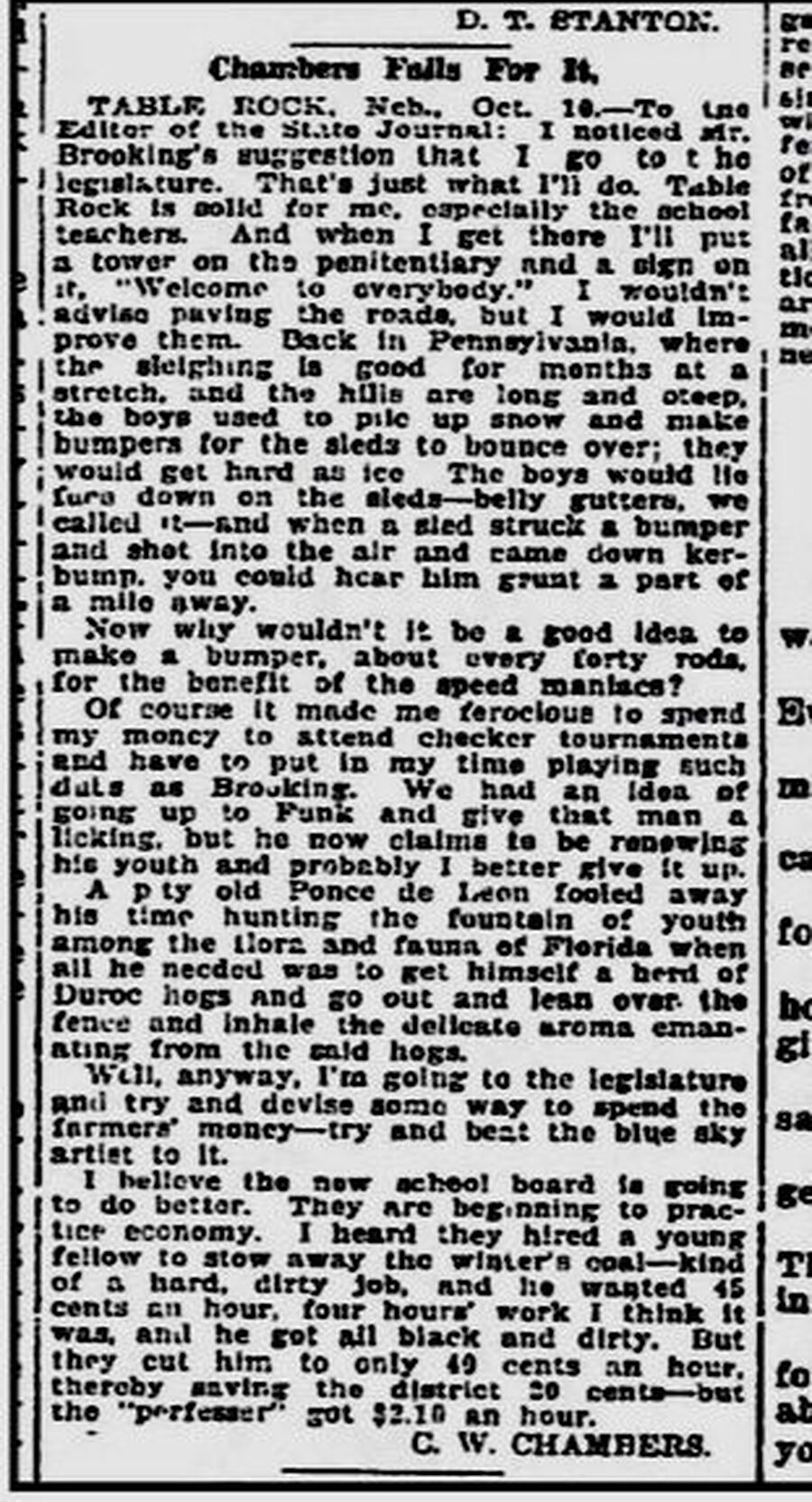 more about the cost of schools, "this extravagance has got to stop" because the prosperity resulting from world war i was done gone.

Steve Staley, a history nut who was raised in the Dubois area, sent a copy of this transcription of a column written by C. W. Chambers.  This transcription is from Steve's huge wonderful collection of odds and ends.  Steve is not related to the Chambers family, he just loves neat things.  Not sure who transcribed the column, perhaps his mother; Steve's parents both attended the Christian Church (Church of  Christ) in Table Rock, as did the families of Wayne Covault and Leonard Mertes, cousins mentioned in the article as "real little boys." There is no date, but Wayne Covault and his cousin Leonard Mertes were both born in 1915. 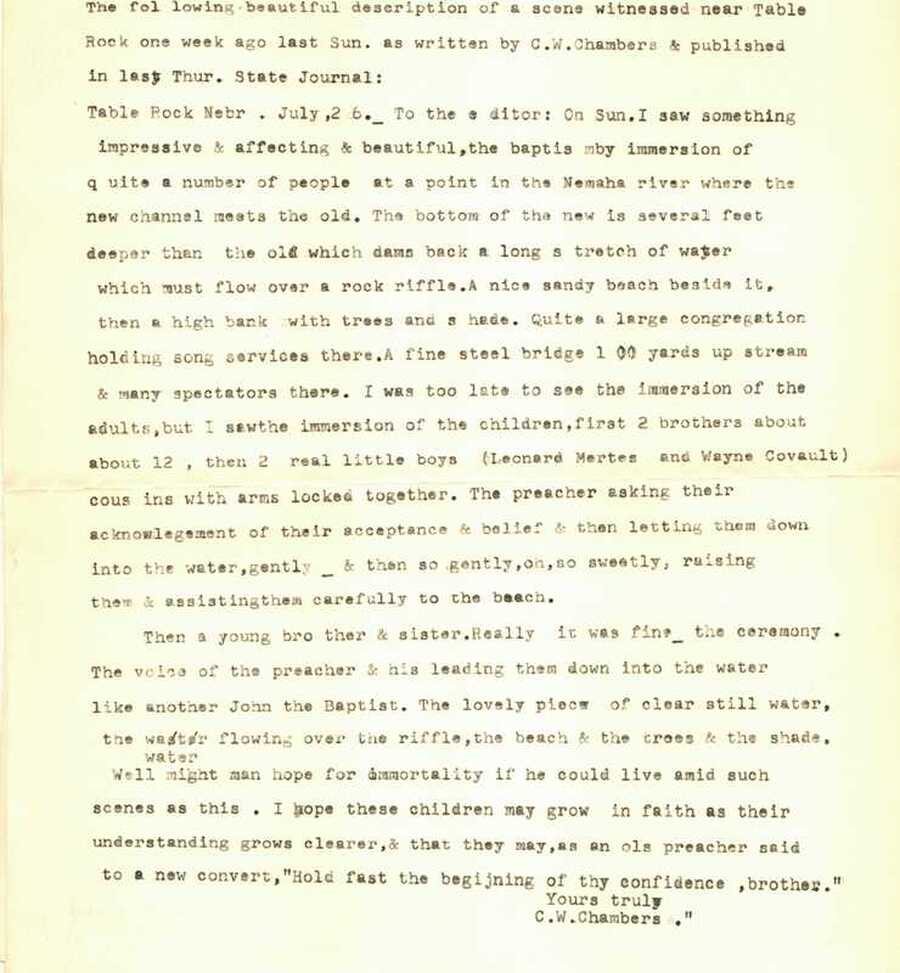 1933 -- the railroad brought in rainmaking cars 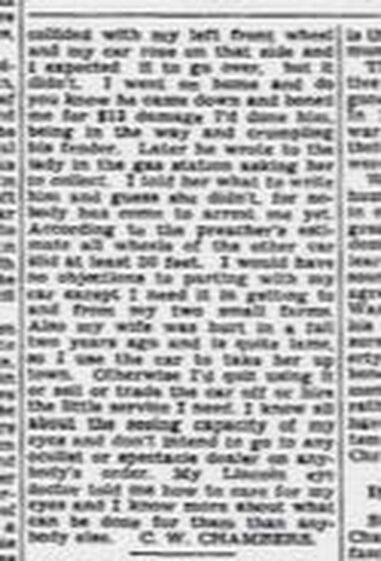 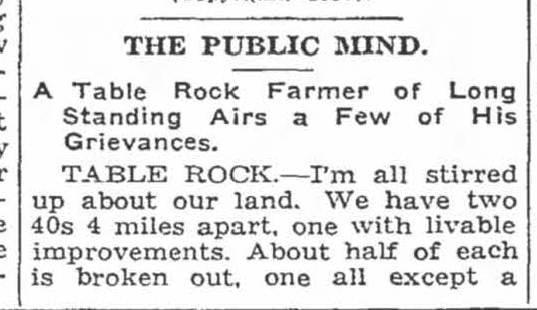 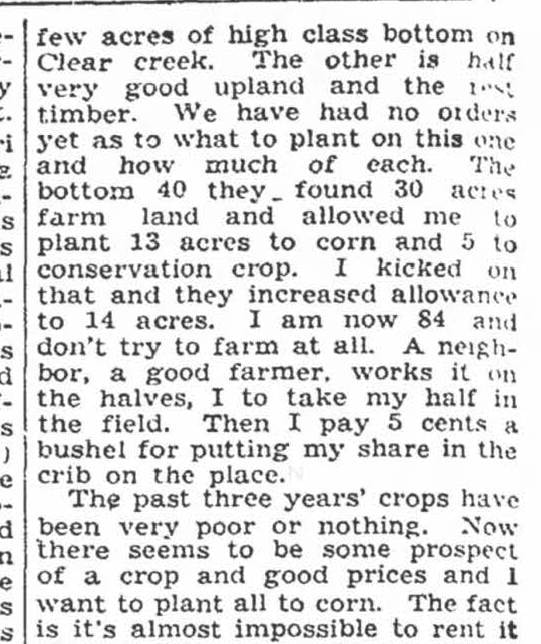 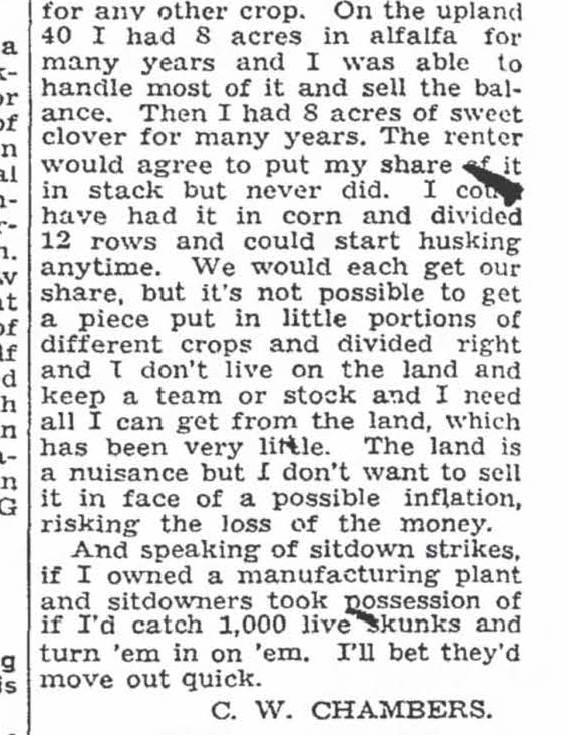 Word was received here Monday morning of the death of Mrs. Ruth Chambers Wolfe which occurred at her home in Council Bluffs at 9:00 o'clock Wednesday morning and immediately following, the body was brought to Table Rock where it was held in state at the Methodist Church until 1:30 o'clock. Committal services were held at the Table Rock cemetery in charge of Rev. E. V. Price.

Ruth Chambers only daughter of Mr. and Mrs. C. W. Chambers was born at Table Rock, Nebr. November 1, 1880 and passed away at her home October 17, 1938 at the age of 57 years. Her early life was spent here and she graduated from our school in 1897. In June 1906 she married Louis C. Wolfe and moved to Council Bluffs where she has since made her home. Three children were born one having died in infancy and the other two are Ruth Louise Anderson of Lincoln and William Chambers Wolfe of Council Bluffs.

Besides these two children she leaves her aged parents and three brothers, Harmon of North Platte, Ward of Table Rock and James of Glendale, California, her husband having preceded her in death in November 1935. 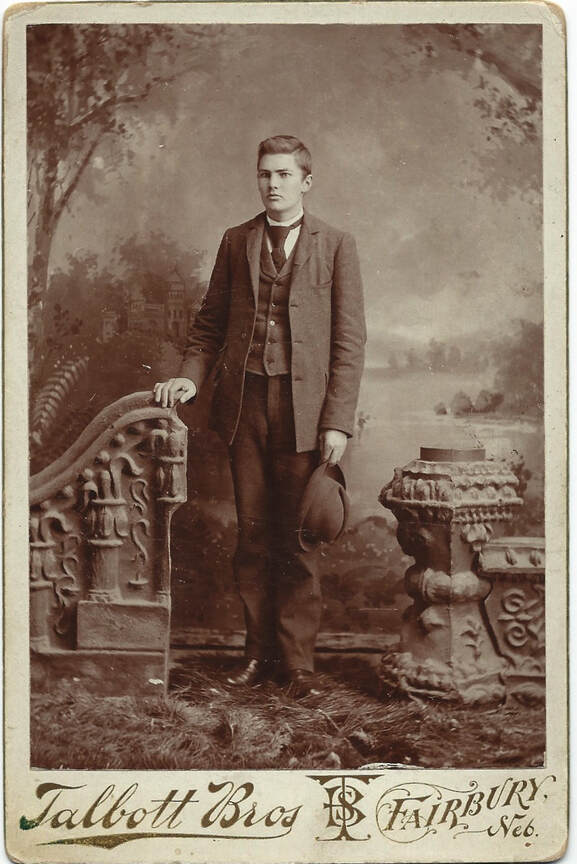 Shared by Marilyn Smith
A 2015 email from Marilyn Smith after Frances Graham Blecha sent a history of the Allison country school to her.  Marilyn was interested because her husband Dave was descended from the Allison family for whom the school was named:

​Hi I just wanted to let you (Sharla and Frances) know how excited I am to have finally had time to read the great Allison School handwritten history Frances had sent me. I had skip read it and was happy to have it.

But..tonight I was having time to focus and actually READ IT thoroughly. I was absolutely excited to read the second page of the list of former teachers and to see Chester L Chambers listed for 1899­1900 for nine months for $28.

Thank you so much ladies for all the help in sleuthing out these relatives. I tried again last night and again this am to find Chester in a census back there so it maybe mispelled. But just having him be a teacher for nine months is wonderful information.

He's actually a relative my husband can remember!

In a follow up email, Marilyn related some of her husband's memories of Chester:

Yes! They'd have picnics up at their place. Up as in a little higher up the hill on the other side of the river!!!! Dave's  family was great on having picnics. They all seemed to get along good.

In 1910 Dave's grandparents and kids lived with Chester, in 1920 he lived with all of them!

In 1948, Harman wrote a wonderful letter to a grandson of the ineffable Capt. Jennings, a Confederate soldier who warmed the hearts of Table Rock.  McBride was a well-known Nebraska sportswriter at that time.  By that letter, Harman showed something about his own childhood. 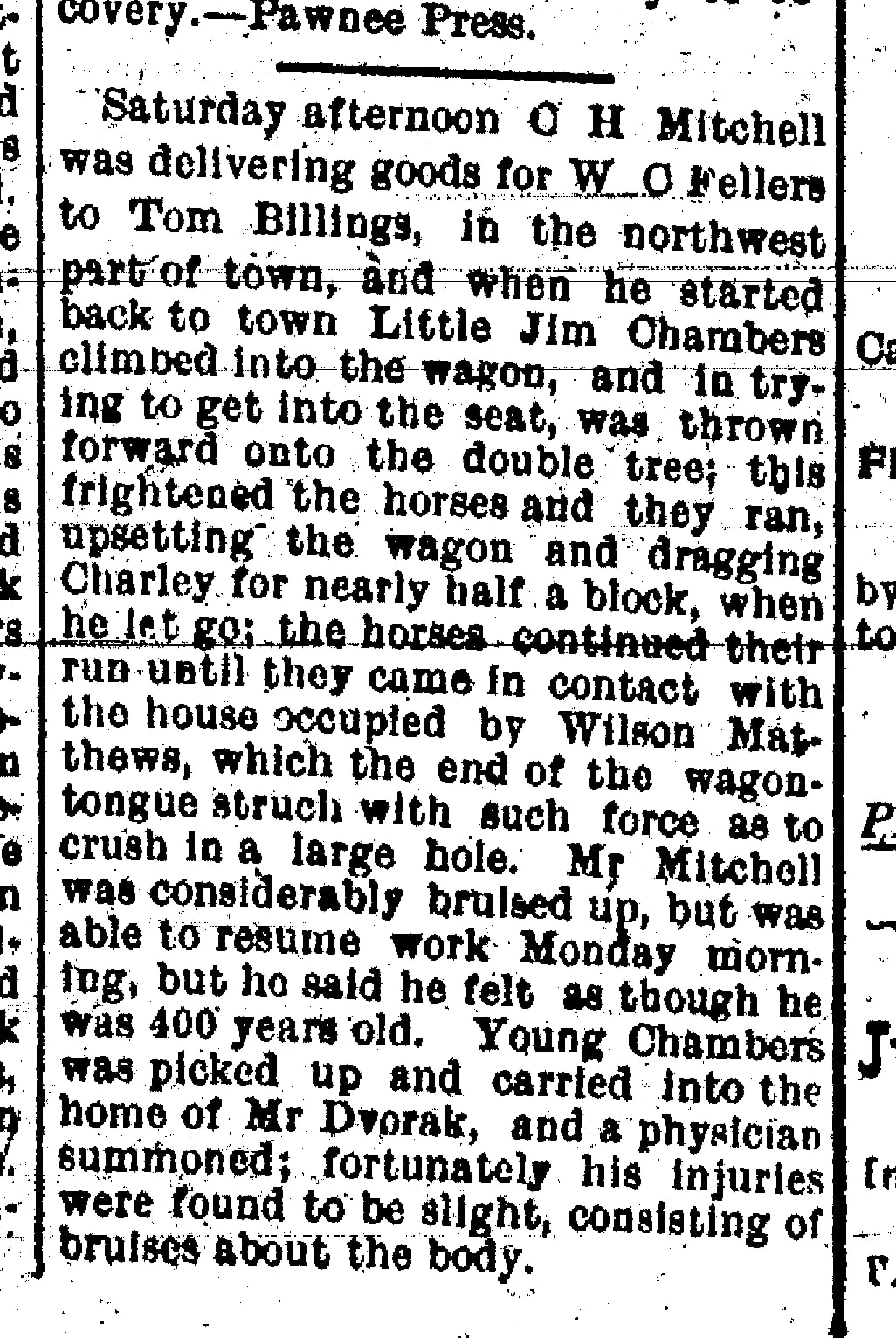 June 1902 article in the Argus
View My Stats