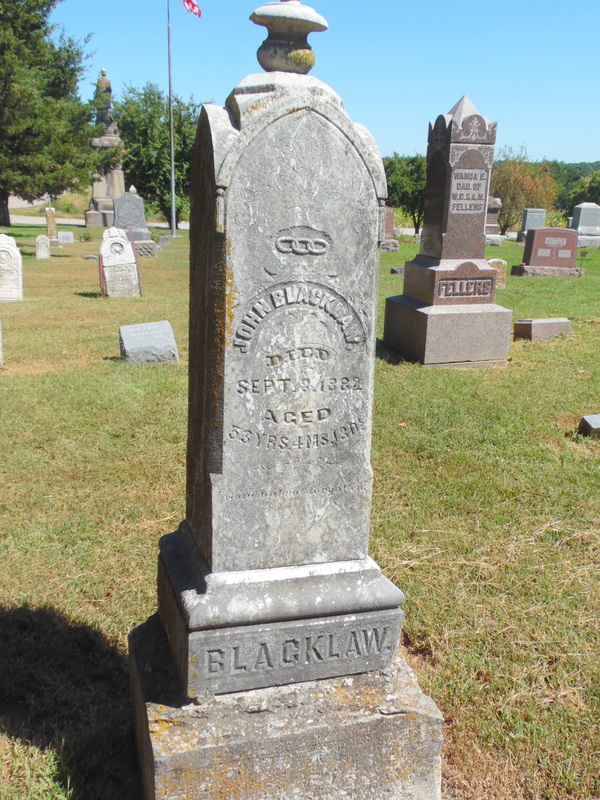 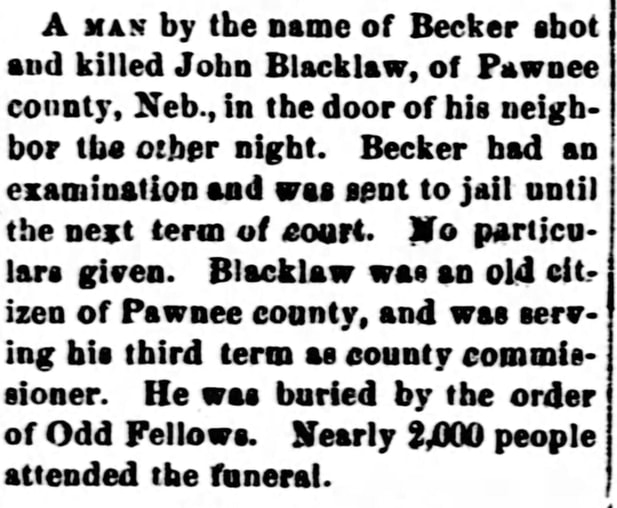 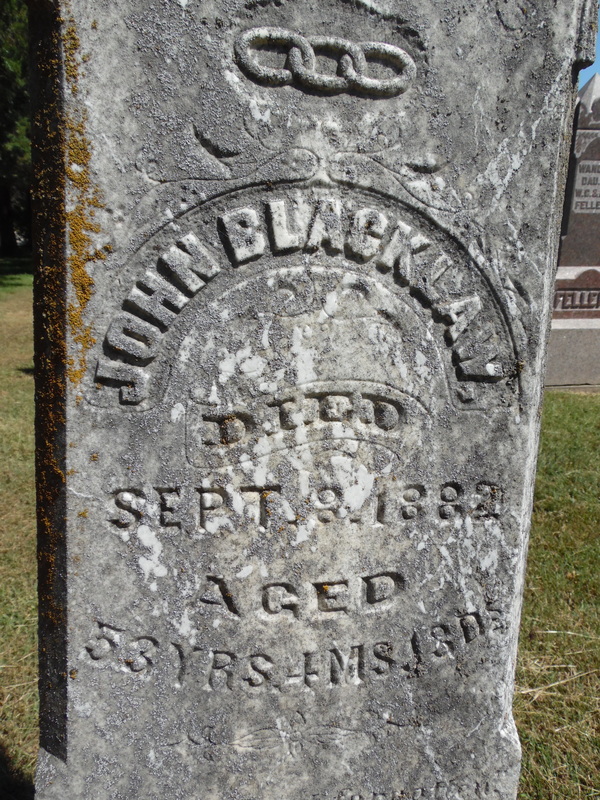 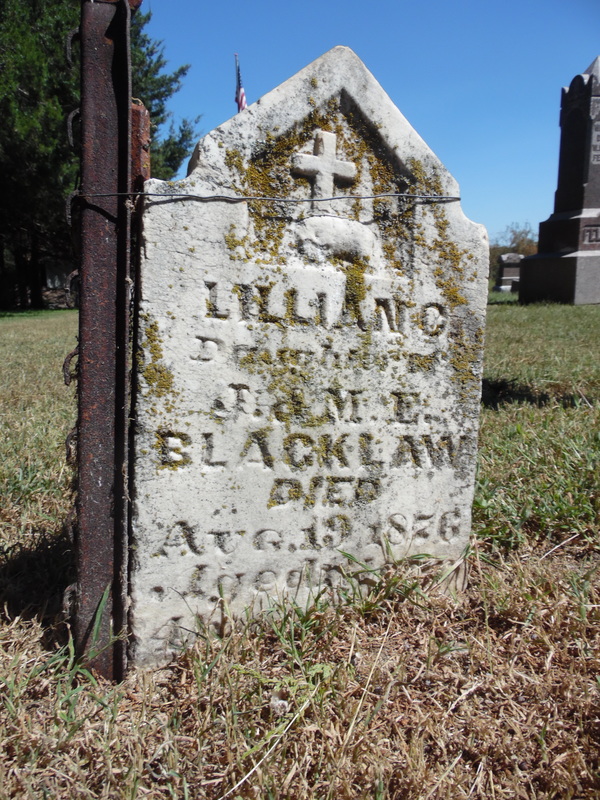 Little Lillian was not the Blacklaw's only child. The 1880 census shows he and Margaret, then 42, with five children at home: Mary, age 16; Anna, age 12; James, age 9; John B., age 7; and Thomas William (Will), age 2.  Lillian, who died in 1876, would have been four had she lived, so fell between John and Thomas.  There was an older daughter, Josie, who would have been just a year older than Mary.

At the time Blacklaw died, if all of his children were still alive, his wife Margaret would have been left a widow with an 18-year-old daughter and four children between the ages of 4 and 14.  The last of the Blacklaw children, Annie, died in 1952 and was buried with her sister Josie, who had died in 1946; neither apparently had married.  By the time Annie died, the events of her father's death were 70 years in the past.  At the time of this writing in 2018, those events happened 136 years ago. 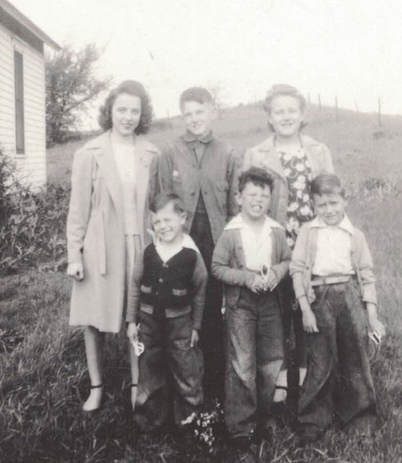 The November 1, 1893 Columbus (NE) Journal carried an interesting report about a Dr. J. J. Byrne's partnership with Blacklaw.  The unexplained "financial trouble in connection with the late John Blacklaw, his partner" is not explained.  There may have been no wrongdoing by Blacklaw at all but rather Byrne did bad deeds while in the partnership. Whatever happened, it reportedly happened in the winter of 1880, and Dr. Byrne left town in February 1881.  Blacklaw was killed in September 1882 in an unrelated event. 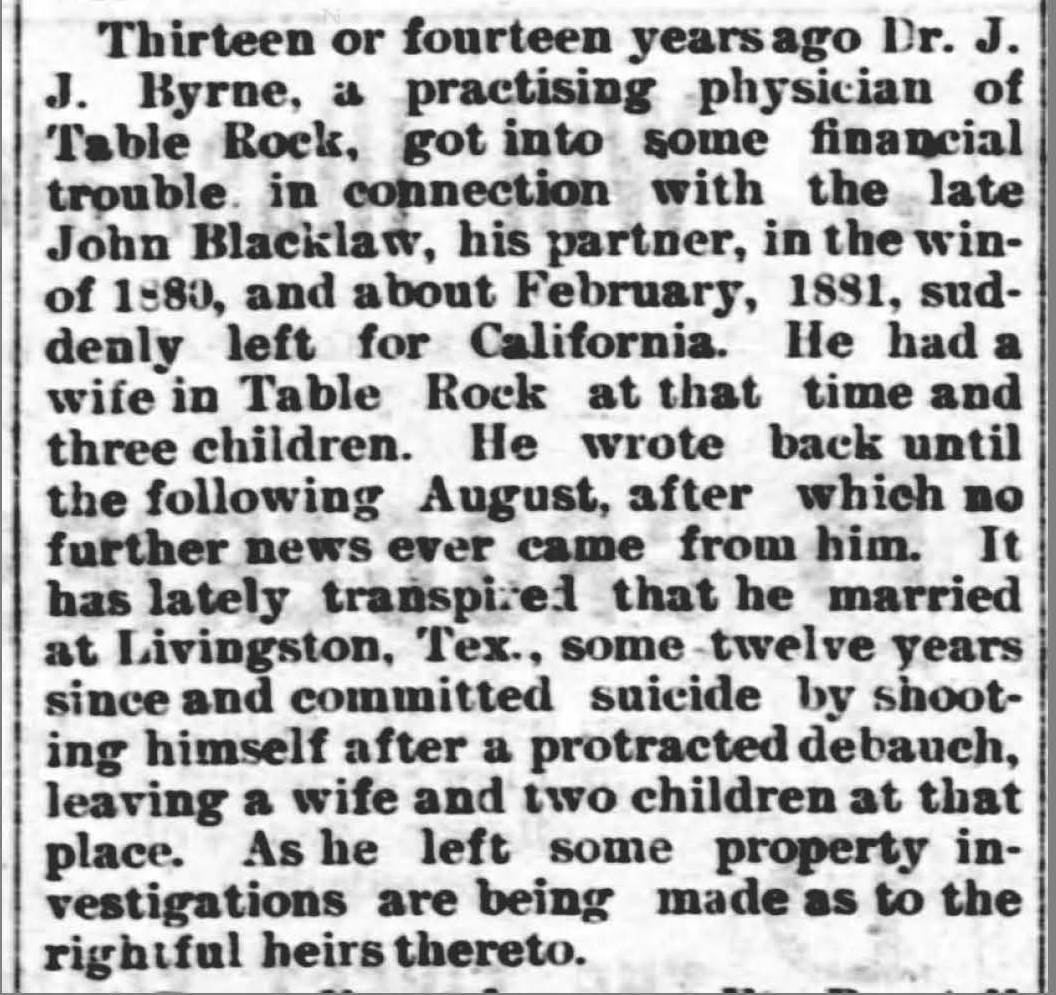 THE DEATH OF JOHN BLACKLAW 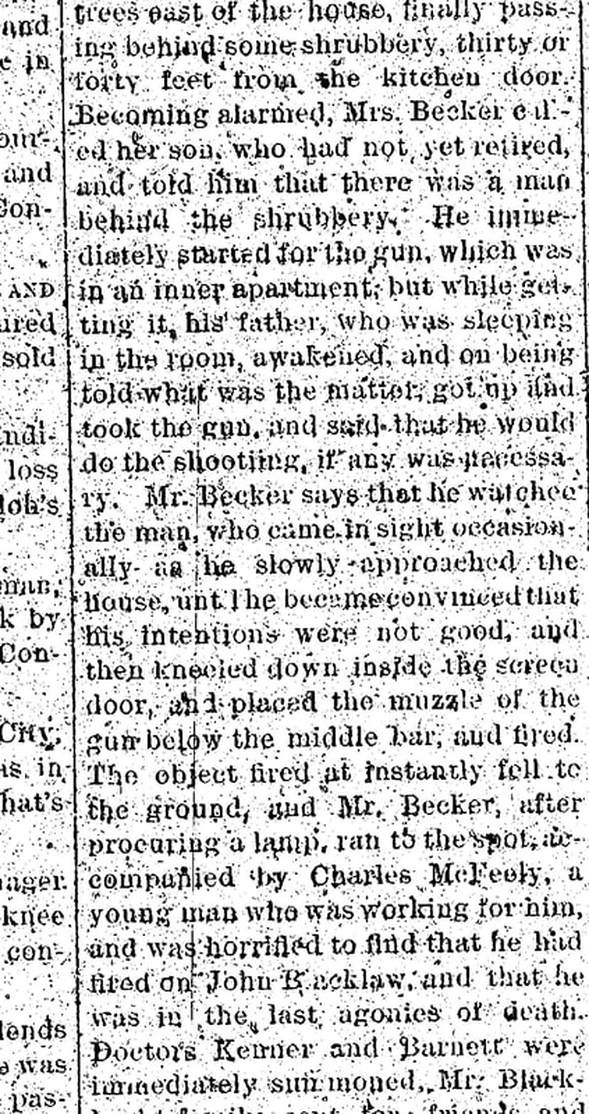 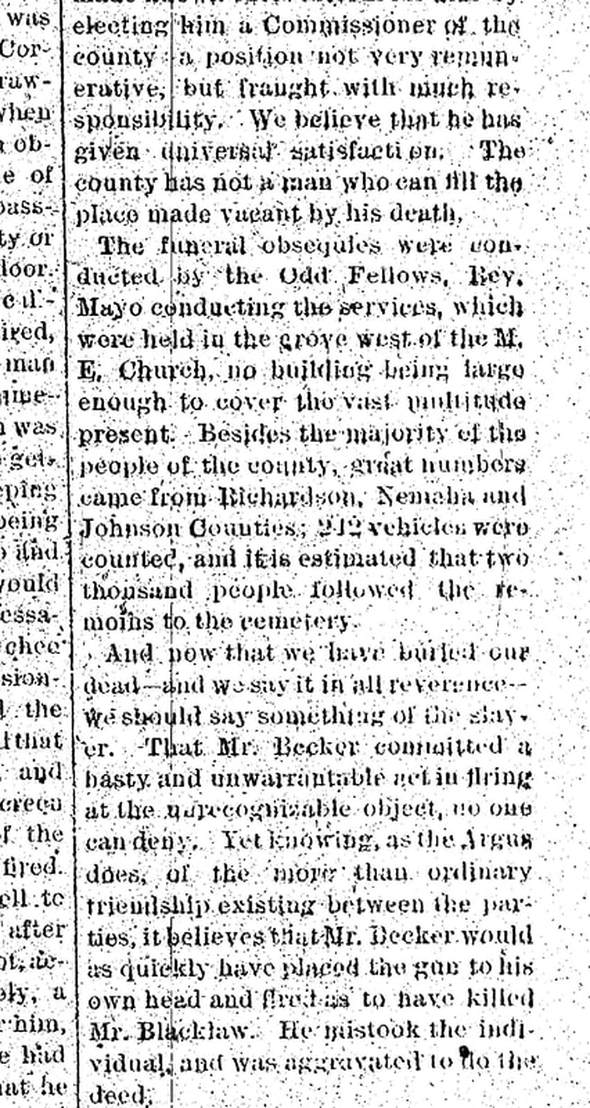 Margaret Blacklaw is mentioned in the Portraits and Biographical Album of Johnson and Pawnee Counties, Nebraska by Chapman Brothers.  The Table Rock Historical Society has a couple of copies of that most excellent book.  What ever happened to her?  We don't know.  Only the stones of her husband and daughter are in the Table Rock Cemetery.  The farm was sold to Peter Van Fleet, an interesting character in Table Rock's history, and, still called the Blacklaw farm, he sold it to the railroad in 1907 for use in burning ballast.  Since Margaret did not die until 1924, she may have sold the farm to move away. 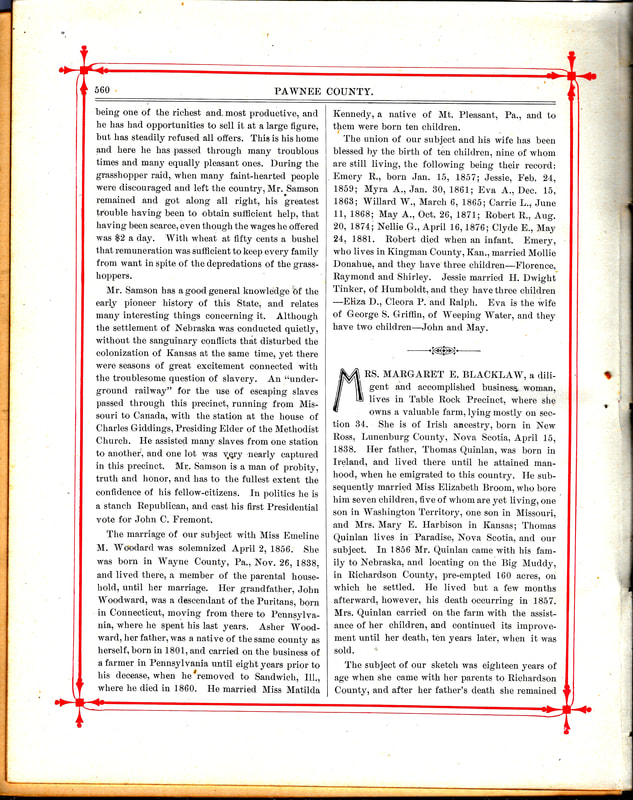 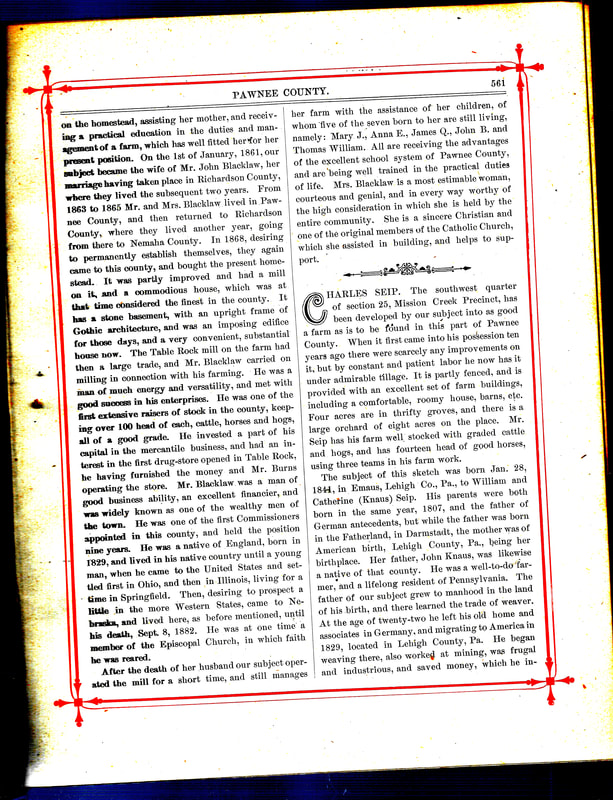 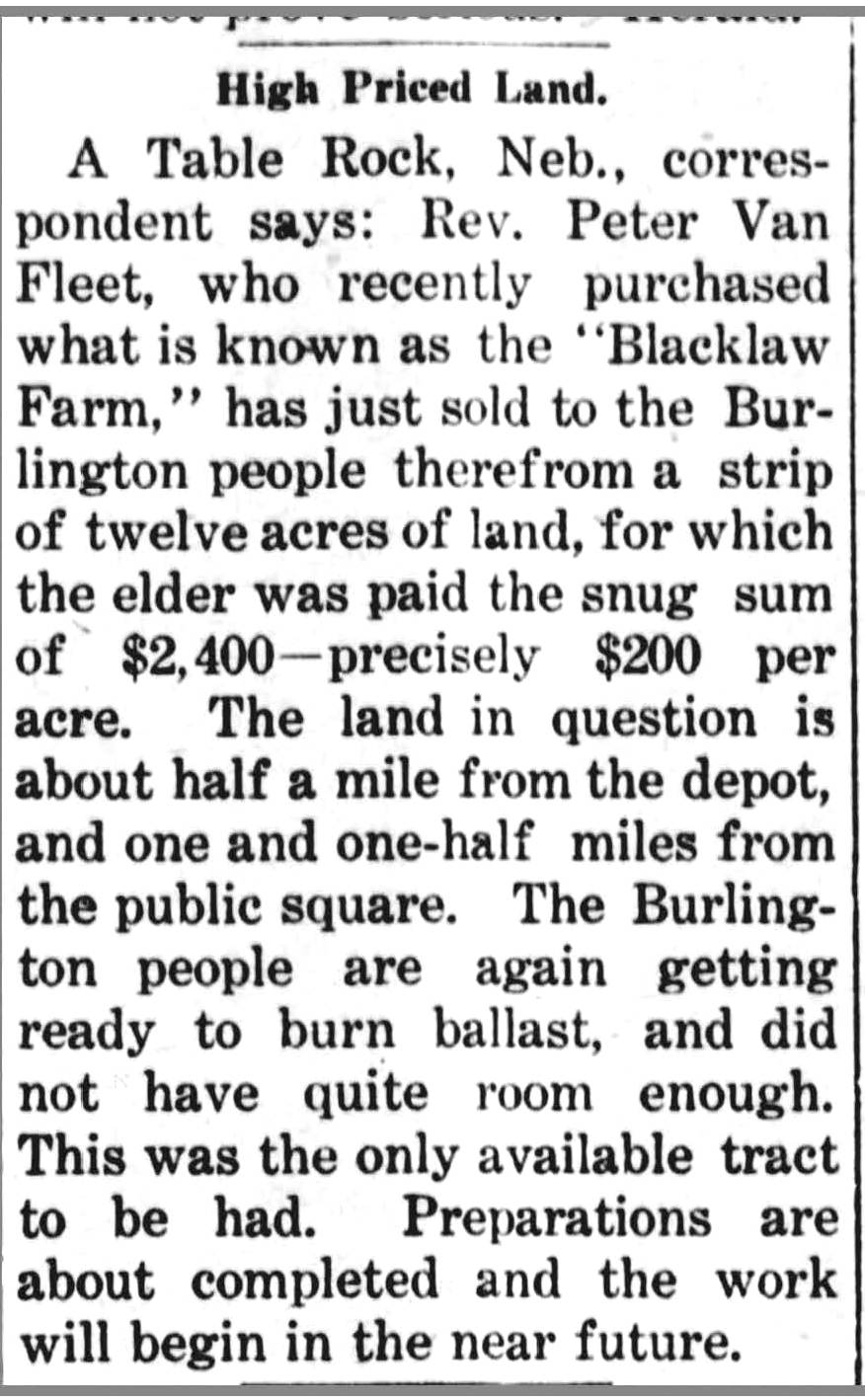