The Panic of 1893 had left the nation in a deep depression and Bryan proposed to create inflation with a “free silver” policy, which would double the value of silver in proportion to gold. Bryan took to the rails, reportedly speaking some 600 times to some five million listeners. 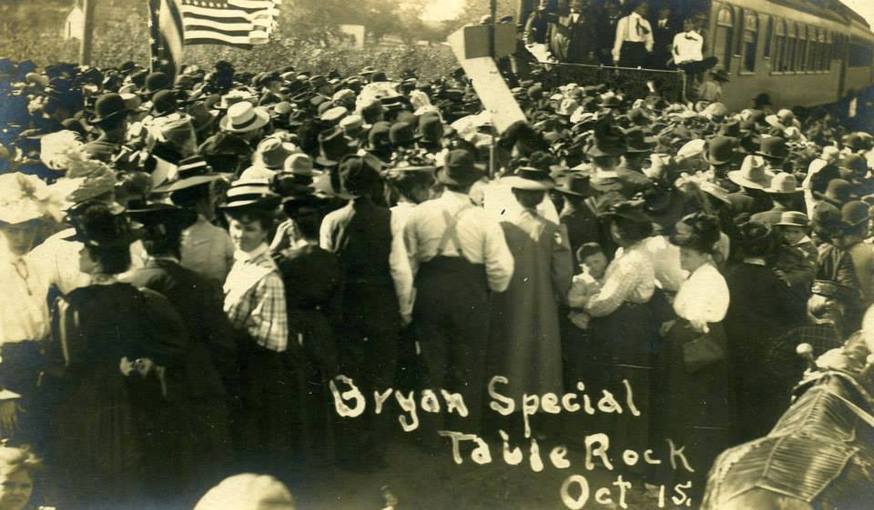 I hardly know what to say, I supposed that when I came to Nebraska I would be met by some enthusiastic friends who have been loyal during years past, and by some that have been endeared by ties of personal friendship. But I hardly expected... such continued manifestations of your affection.


I came to Nebraska a young man knowing none of you, and I cannot complain of what Nebraska has done for me.


If I have been able to do for Nebraska some part of what she has done for me, I have done a great deal. I owe to these people what there has been of my public life.


Although I have been made the nominee, I come back just as I came nine years ago—a private citizen who will vie with you, in public as in private, in doing what seems best for the glory of the country and the welfare of our people.


If I should talk until the end of the campaign, if I were able to speak all the languages of the world, all the tongues of Christendom, I should not be able to express how I thank you from my heart for your kindly feelings manifested, and for what you have done for me.


My highest ambition is to so live that those who have put their trust in me will never have cause to regret it."

Listen to a 1908 speech by Bryan
Bryan ran for president again in 1908.  Former Teddy Roosevelt was off in Africa, hunting.  Bryan, again campaigned by train.  Again, he stopped in Table Rock, as noted by this little flag, which is about one foot by its longest side.
Photo 205:  This photo of a flag with handwriting on it had a transcription signed by Ada Justic: "This flag was waved in greeting [William Jennings] Bryan at Table Rock October 17, 1908, where he spoke to a very enthusiastic crowd." 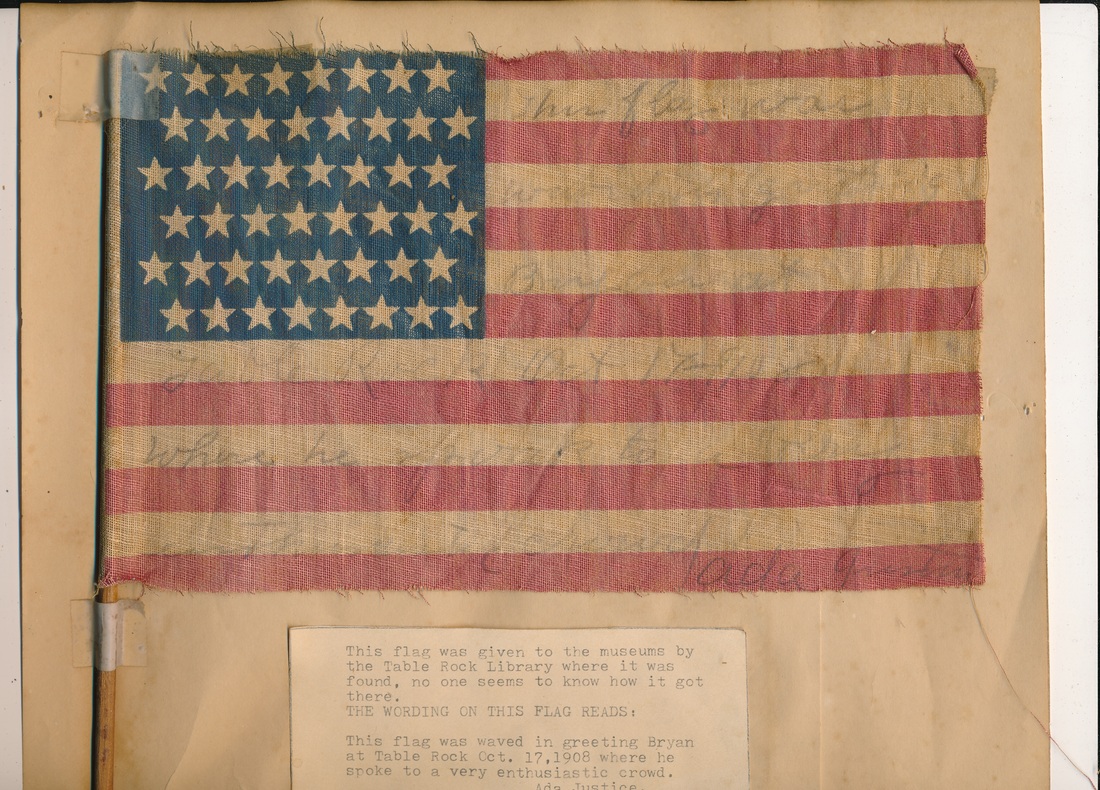 In 1912, Bryan came off the Chautauqua circuit.  Photo 207 contains two photographs on a single mounting.  The second is undated and is presumably from the same visit, but that has not been established. Bryan was not running for office that year, but reportedly traveled about in support of Woodrow Wilson.  Presumably that was his purpose for visiting Table Rock. 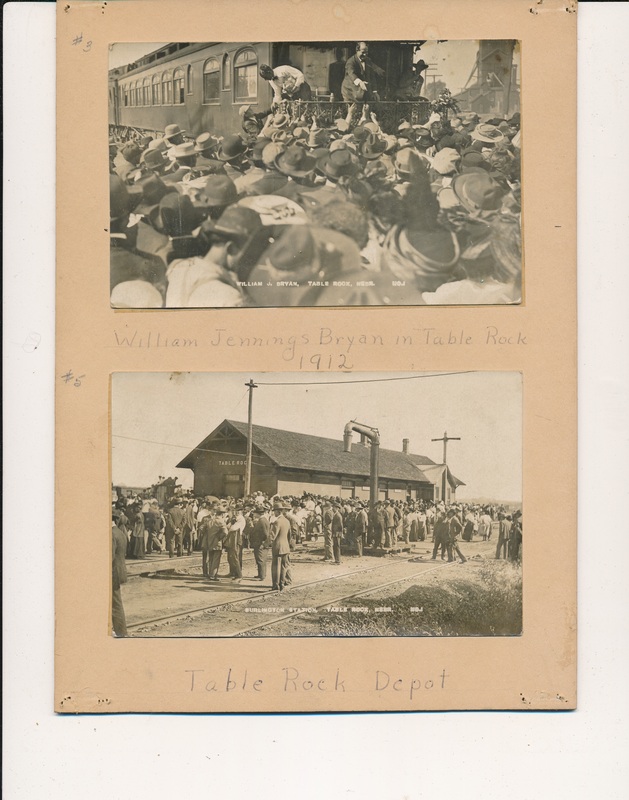 The top photo shows Bryan reaching out to shake hands. 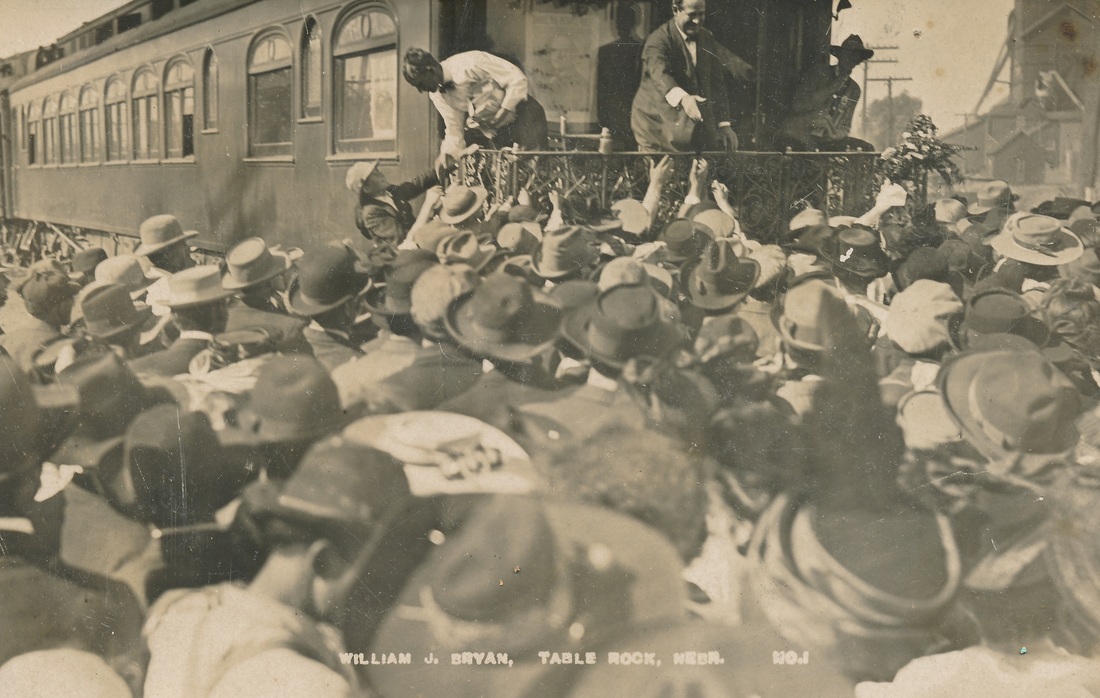 Some excerpts from the photo of Bryan on the train:
Photo 207, the lower photo showing a waiting crowd: 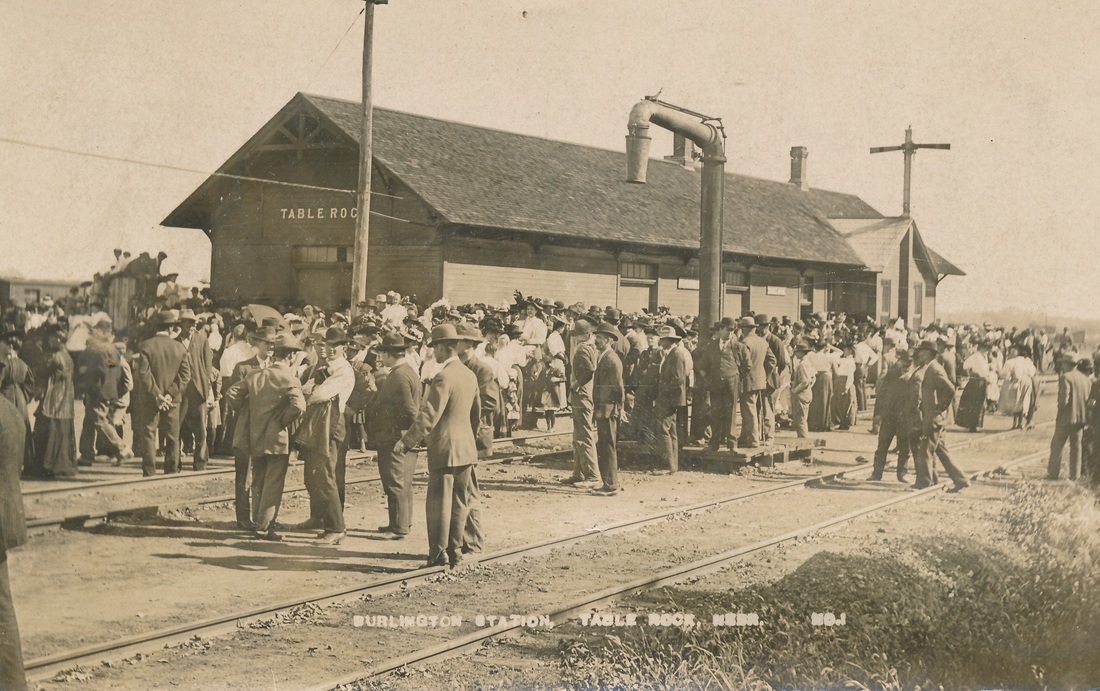