In this escort, you can see the Square in the background and quite an escort -- A fellow in a crazy costume and blowing a horn moves forward with an early automobile in tow. There is a giant umbrella that appears to be sprouting from the back of the car.  The "Home Guard" follows with their rifles and signs.  There is at least one carriage or buggy in the procession, perhaps with the rest of the wedding party. 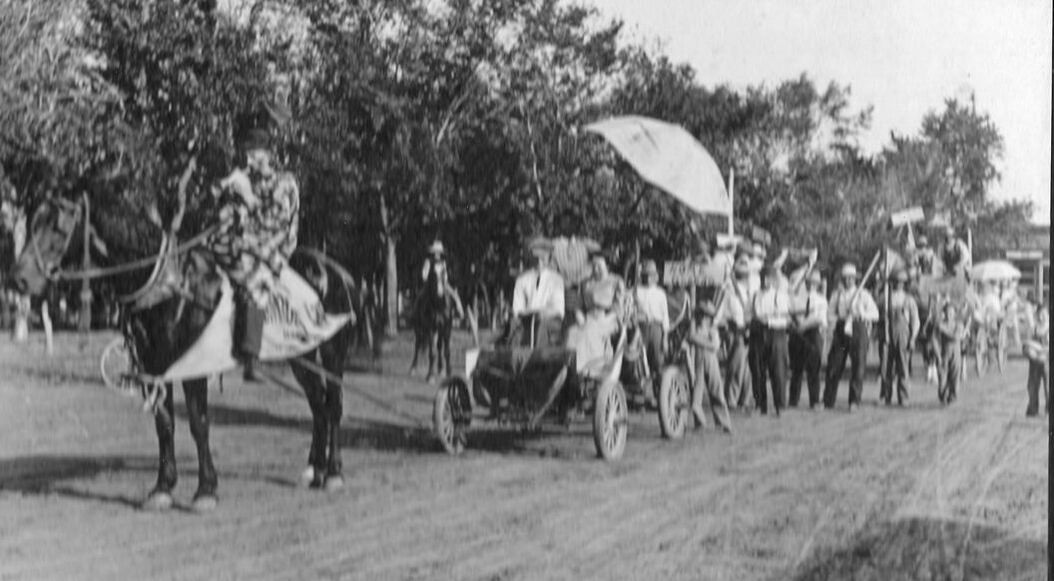 Photo 91 -- Escort for a chivaree, unknown couple, circa World War I era
Take a closer look at this fun picture! 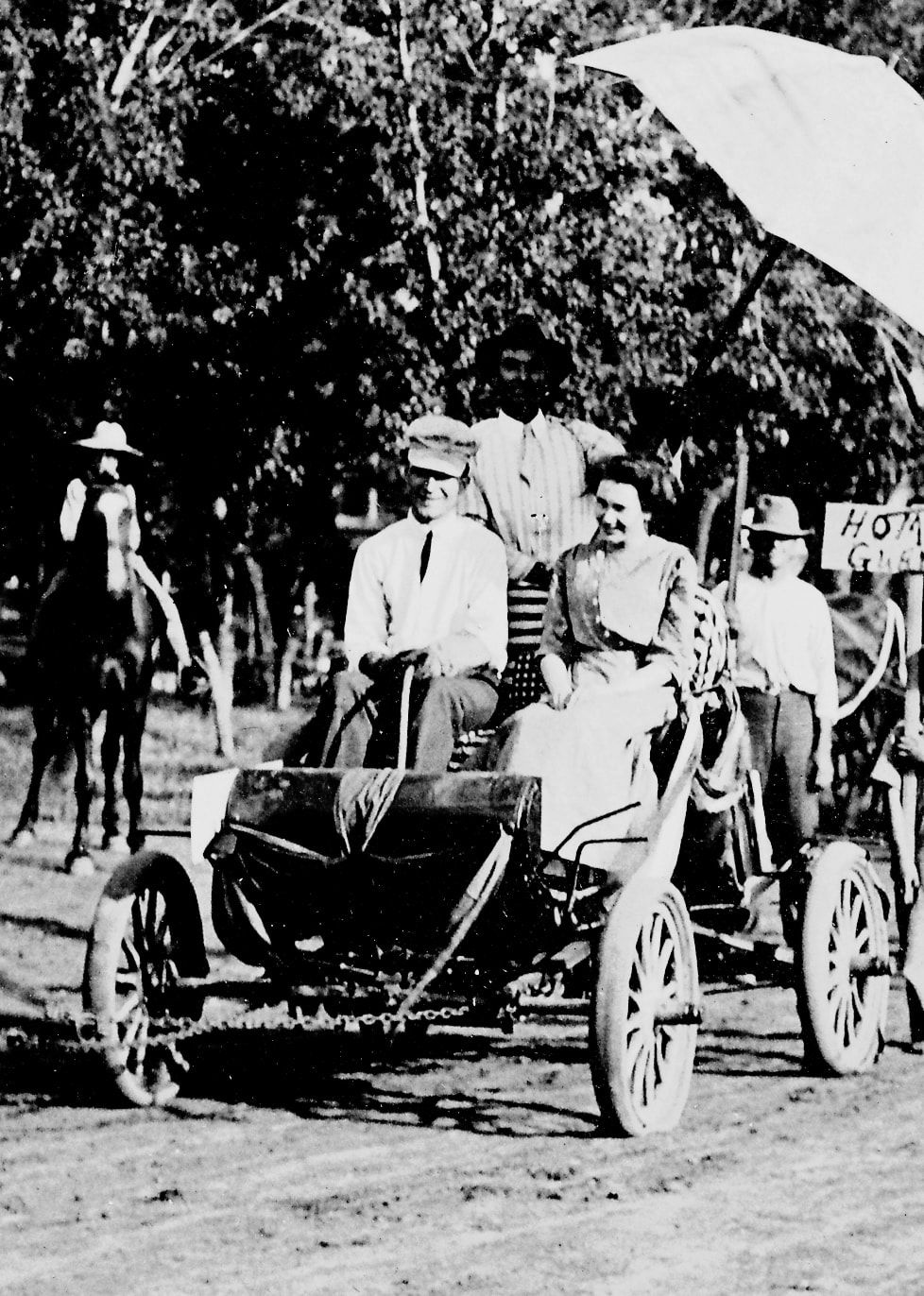 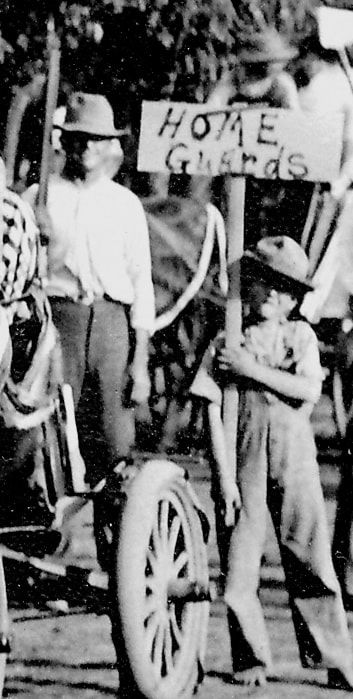 Here's another such event. We're delighted to know who and when.  It was the wedding of Charles Cook and Hazel Wiar, in 1916.  He's the one on the donkey, saluting with his hat!  Three members of the Table Rock band stand with the groom. A clarinetist has an arm on the donkey's rump, another band member with a brass instrument to the left and another to the right.  The signs are great: "No wedding bells toll for me."  "When a man marries, Trouble begins." One sign seems to say "Whole Darn Family" and the other "He, She, X_____."  That's the Methodist Church behind them, just four years after its extensive remodeling.  And no, it was not white.  One might assume that it was brown, but since the photograph is not in color, there is no way to tell.  It may have been a dark green for all we know! 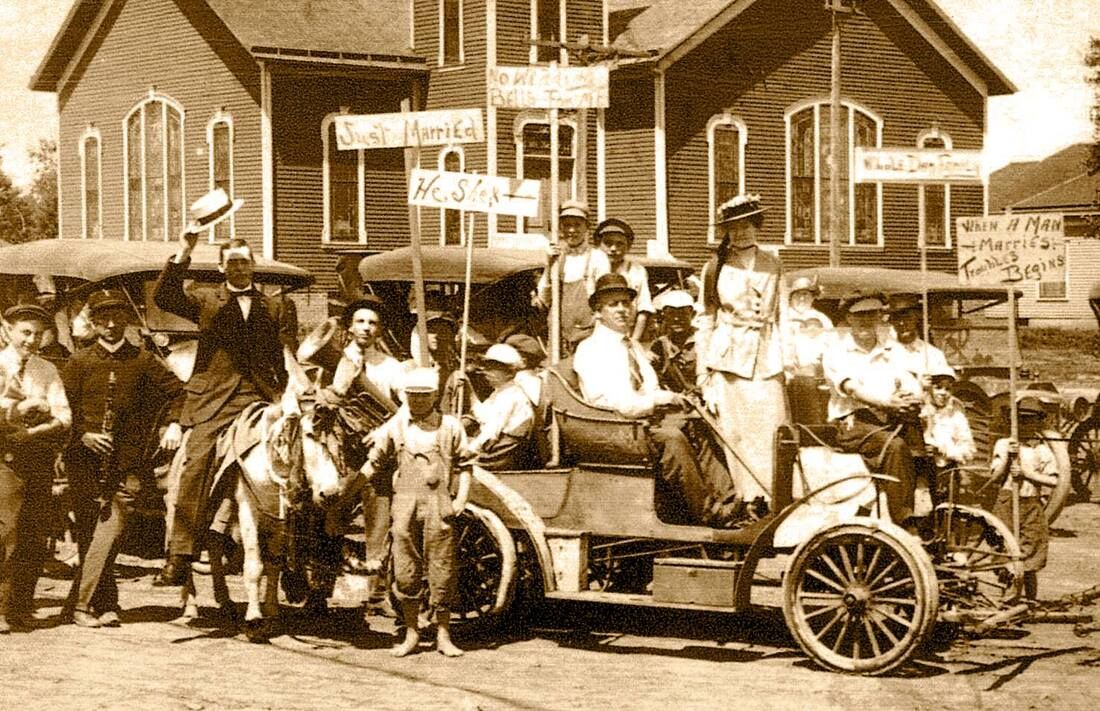 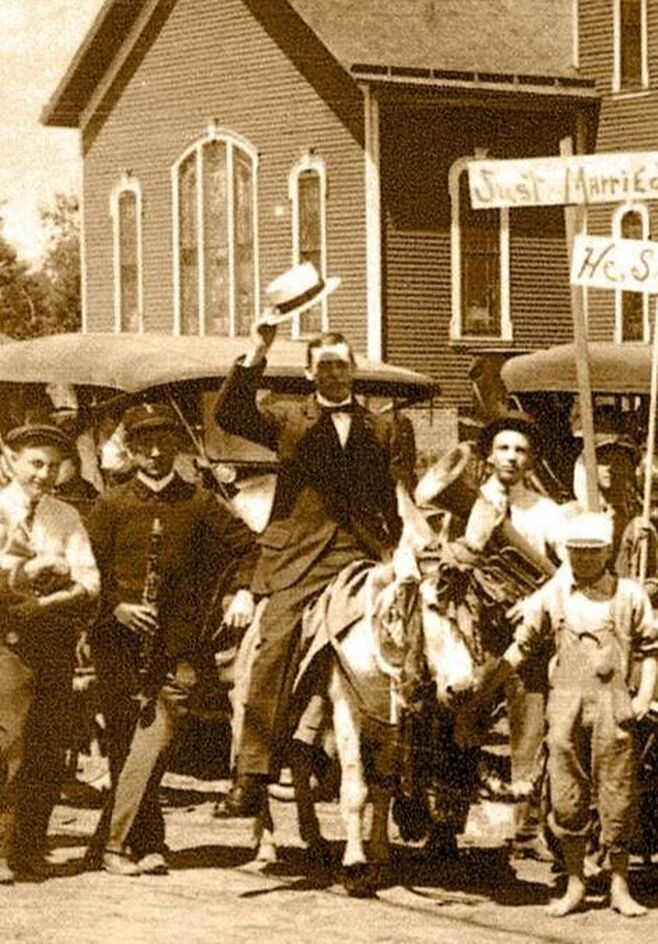 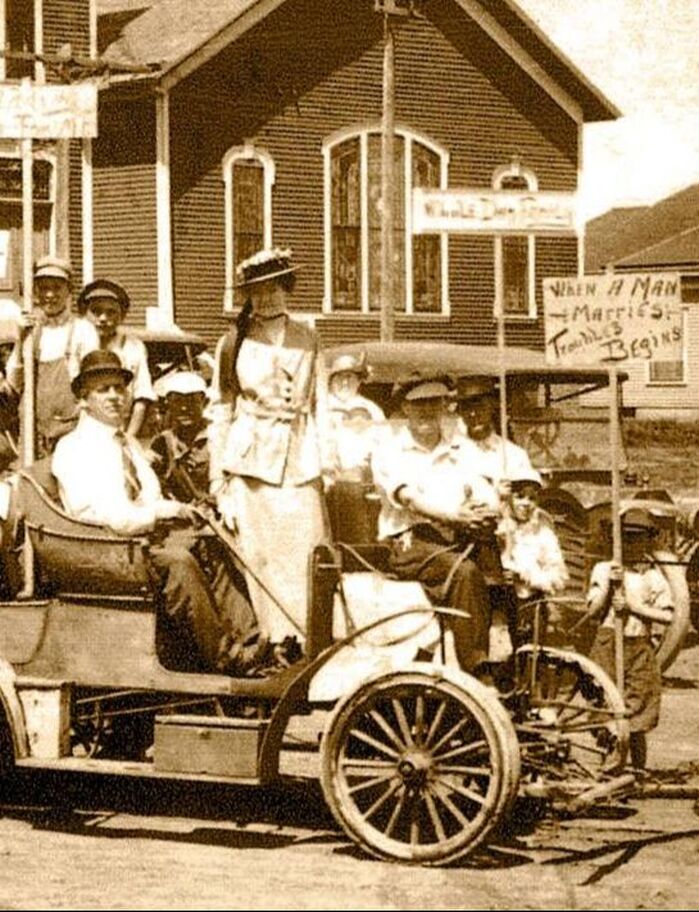 Lois Jentz Ahntholz, when she saw these posted, colorized them for fun! 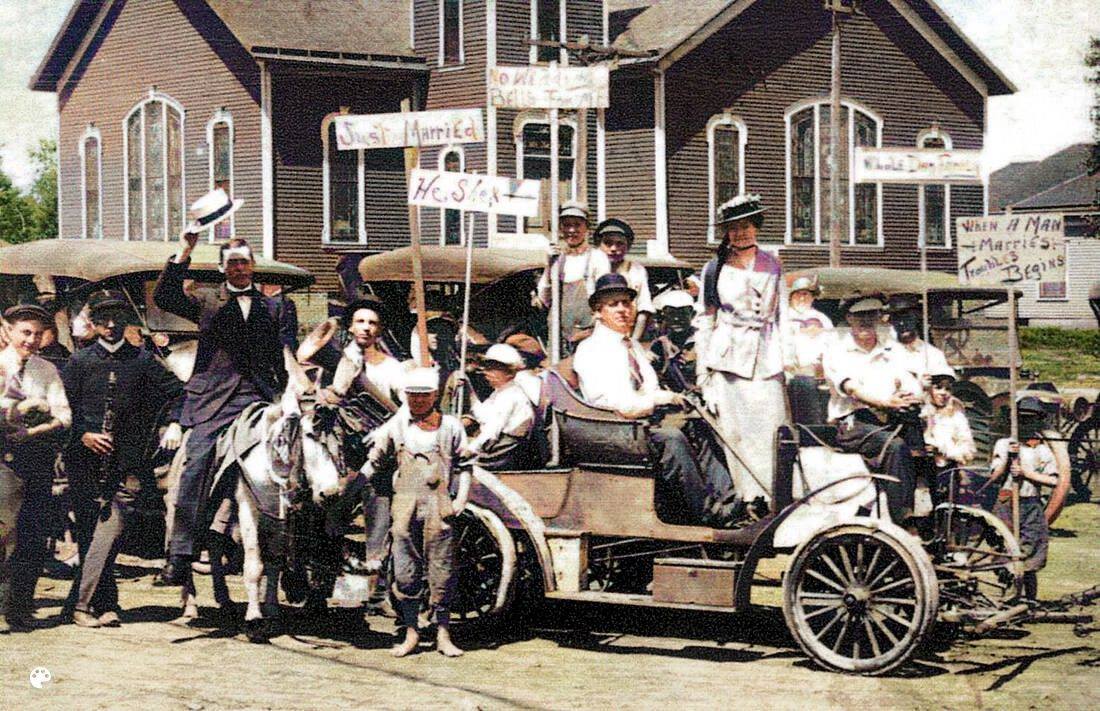 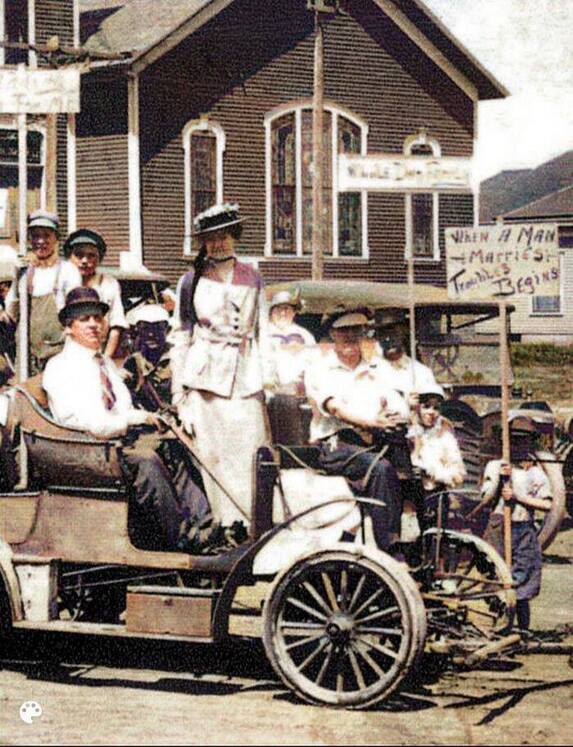 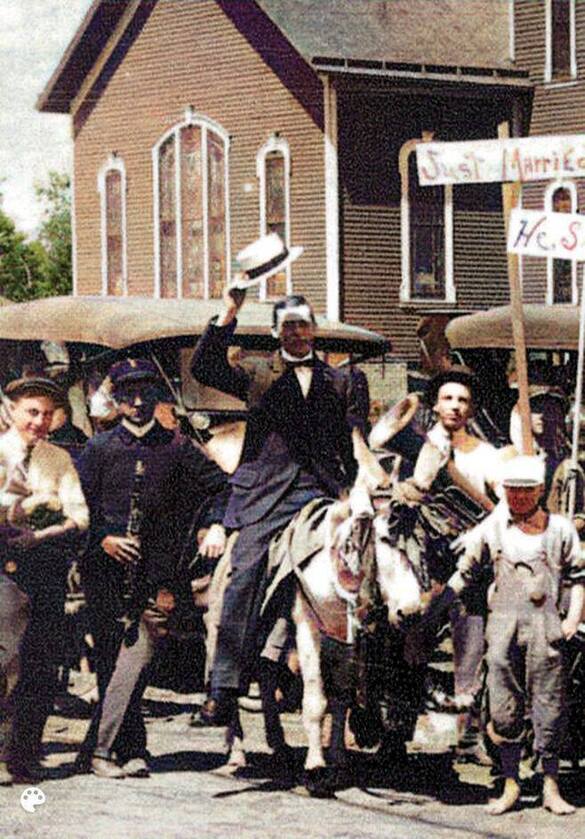 When Gordon Bethel, a widowed father, married Minnie Strohm, it was a happy occasion, and he -- apparently without hesitation -- pushed his new wife around in a wheel barrow. It hasn't been a Table Rock tradition, but it's not uncommon as a way of celebrating the wedding. 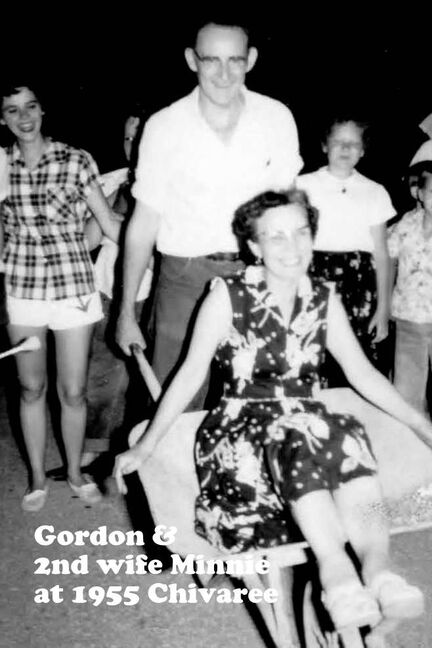 Shared by Jeanne & Bob Bethel
​
Here's a picture from the internet -- not from Table Rock -- to prove the tradition still exists, at least elsewhere: