November 4, 1898 edition of the Argus. Henry and Phebe Cooper. Henry was an old soldier, a Union Civil War veteran, and they were honored by having the members of the Grand Army of the Republic, the GAR, and the Women's Relief Corps, the GAR auxiliary, come en masse provisioned with food and "testimonials of esteem." 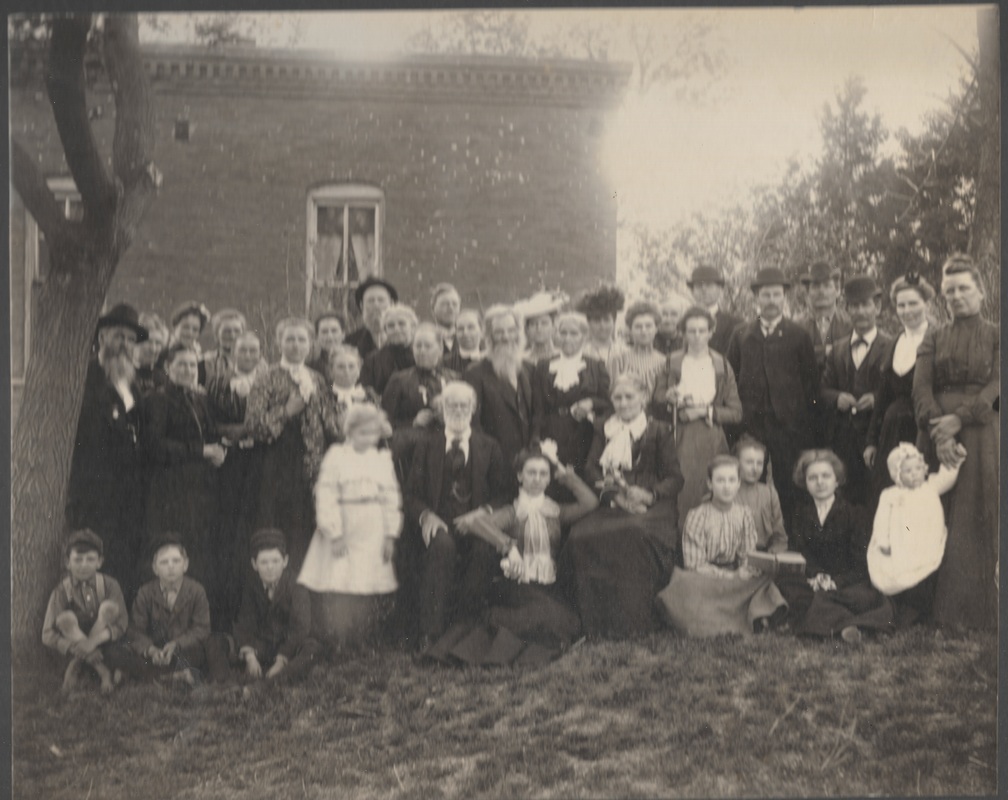 The golden wedding of Mr. and Mrs. Mark Widdifield was celebrated at the family home in this city on Friday, dinner being served in the shade of the trees in the yard to nearly one hundred guests.

Fifty years ago on the 26th day of August, at Peoria, Illinois, Mark Widdifield and Miss Sarah Dowdell were united in marriage by Rev. Mills, pastor of the M. E. Church of that city. The young couple commenced life together on a farm in  that county, lived there for a number of years and then moved to LaSalle County, afterwards moving to Livington County where they resided until 1901, when they moved to Table Rock, where they have since resided.

During their stay among us Mr. and Mrs. Widdifield have won the esteem of all who know them by their conscientious living, as was testified by their presence at the celebration and the hearty congratulations showered upon them. Rev. Murphy voiced these sentiments in an address, as did also Rev. Tyler Atkinson and others. 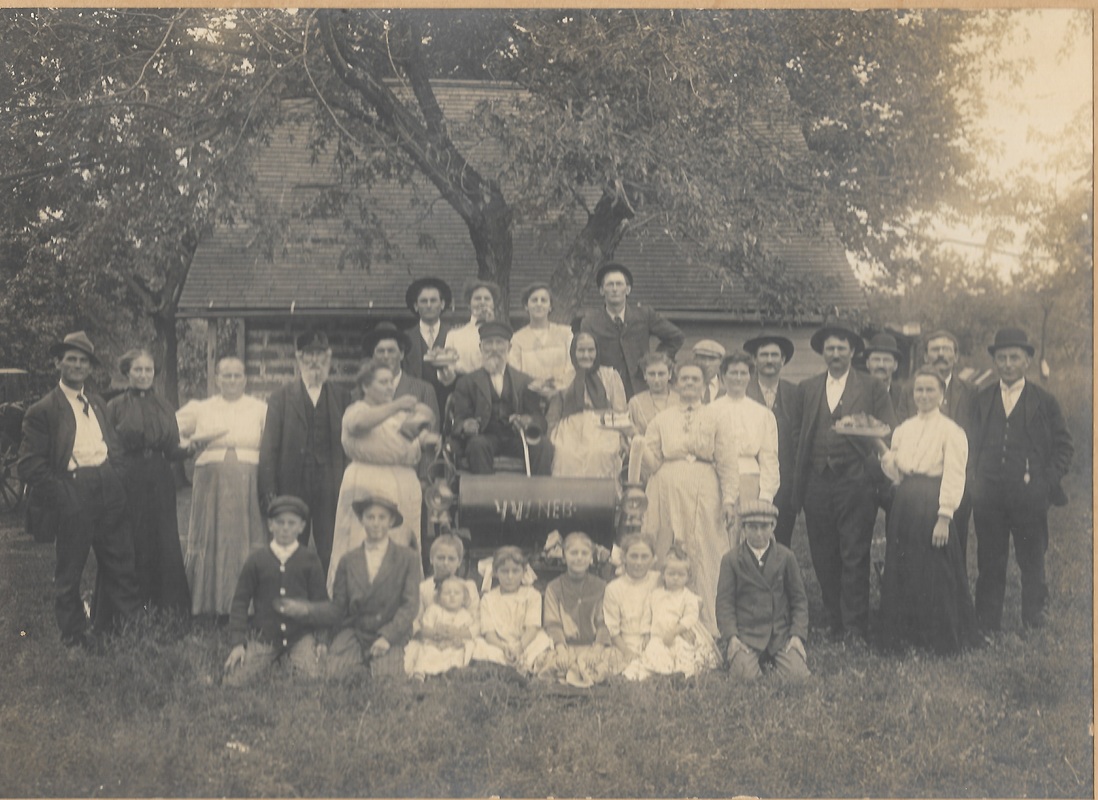 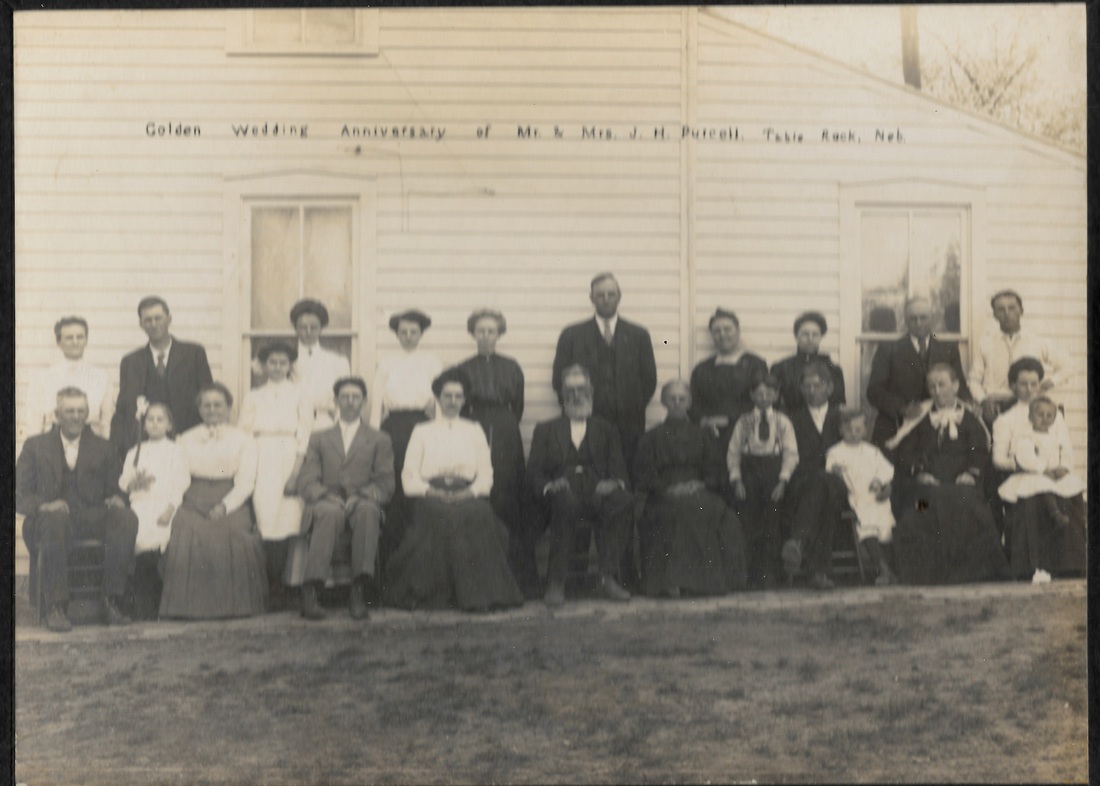 This Golden Wedding Annivesary Picture was taken in 1910, Photo 367. Descendant Terry Hunt Korell provides background: This photograph is of the Golden Wedding Anniversary of James (1832-1921) and Margaret (1843-1925) Purcell. They were married on Feb 16, 1860 so this would be in February of 1910. Margaret was 16 when they married. The picture is pretty blurry but my guess from the shapes is that Della, my great grandmother, is sitting next to James Purcell, the man with the beard in the middle of the front row and that my grandmother is the woman in the white shirtwaist in back of and to the left of Della. Of course, Grandma Margie as they called Margaret, is sitting next to James (Grandpa Jimmie). This would have been taken t the old farm house out where my Uncle Fred Muscheites lived, only further down the road nearer the railroad tracks. It burned in 1932. Aunt Stella would have been 18 so could be standing next to Grandma Ruth in the back row but I can't be sure. They had two sons Jack and Willard who should be in the picture, also Mylum who was much younger than the others. I think maybe the man to the right of Margaret is their son Jack Purcell with his wife Ida right behind him. He's the one who owned the Purcell Store. Della, Margie, Stella, Jack, Willard. “Della Purcell married Parker McCoy. Grandma Margie was James H.s wife, her maiden name was Lane. Stella was Della’s daughter, therefore a McCoy at the time of this picture. Uncle Jack Purcell owned the Purcell store after the fire of 1920, before that it was J.H.'s hardware store. Willard was J.H.'s oldest son. Ida’s maiden name was Stewart. “ 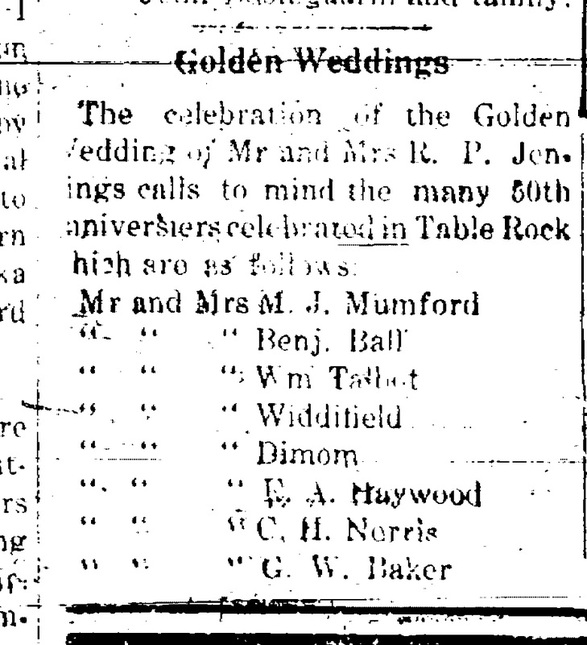 The October 29, 1915 listed many other Golden Wedding Anniversaries, although with no dates. Cited: The Martin Mumfords, the Ben Balls, the George W. Bakers. Chauncey & Fannie Norris. The Talbots, Widdifields, Dimons, and Haywoods. 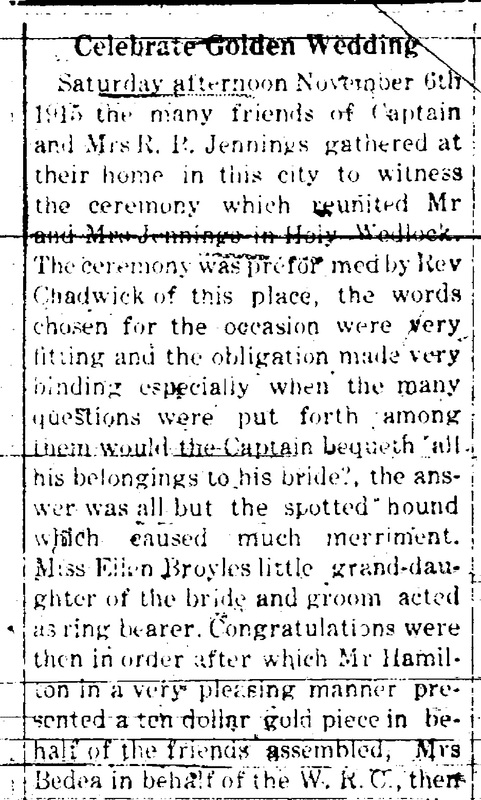 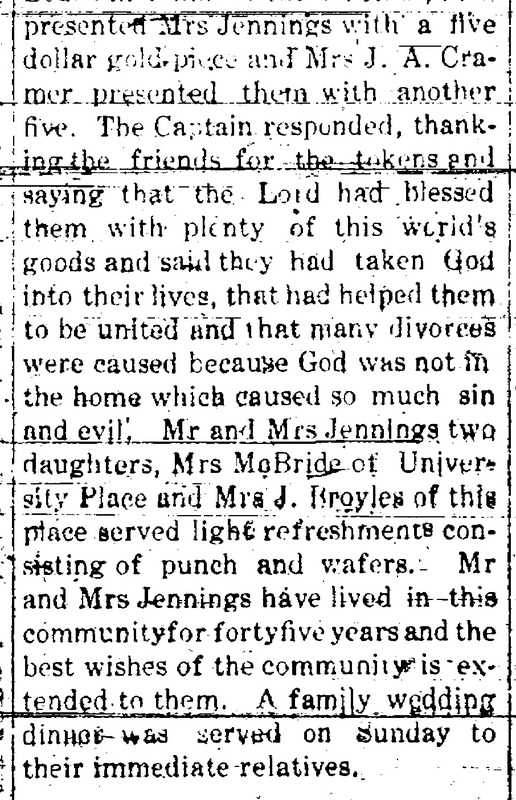 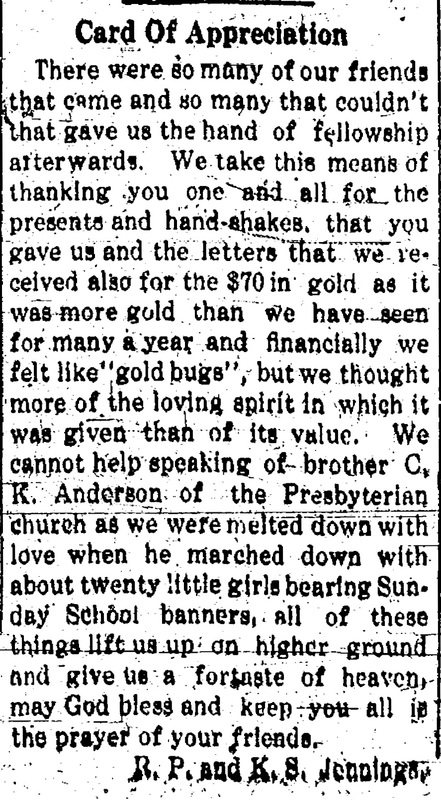 November 12, 1915. A wonderful thank you was published in the Argus by the Jennings. 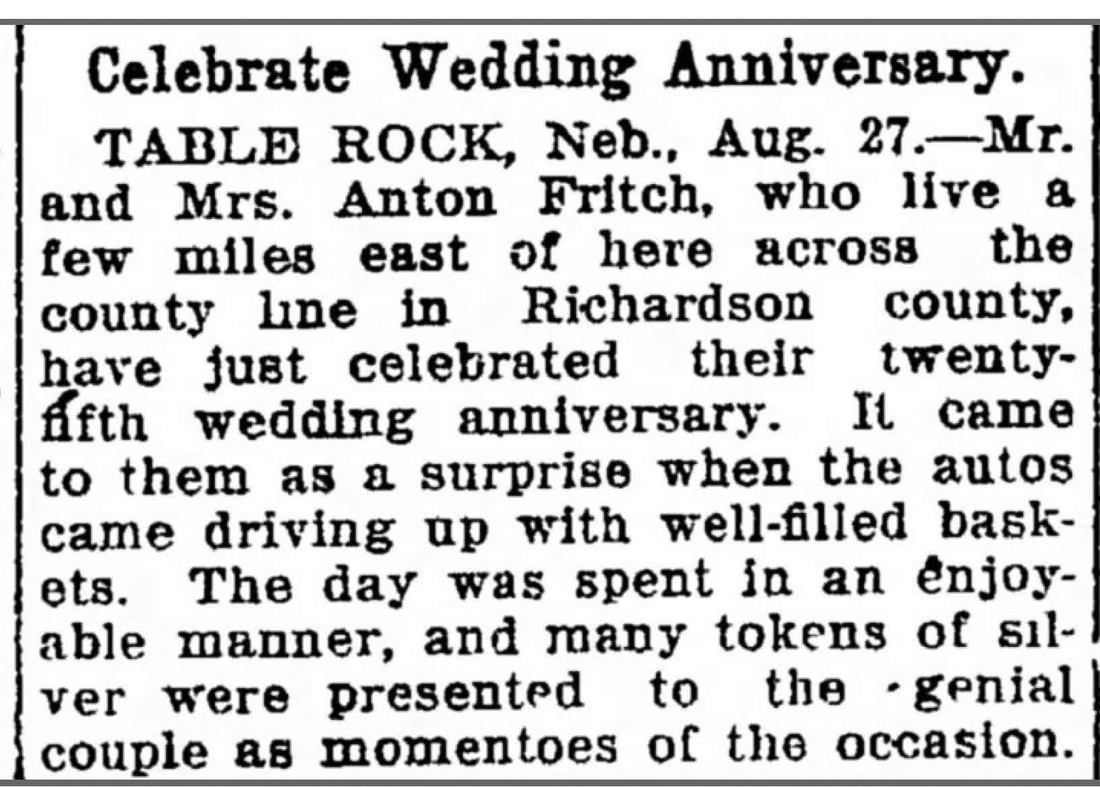 Historical Society member Luella Hinrichsen, poring over old editions of the Argus in search of obituaries, came across the lovely story about a special anniversary.

Wedded Long, Long Ago- On July 3, 1870 a wedding ceremony was performed which united the loves of two Table Rock young people. So tightly was the knot tied that all the storm and stress of the intervening years have not been able to break it, and the husband and wife are living together today in contented and happy old age in Table Rock.

The contracting parties to this wedding of fifty-four years ago were George M. Lane and Miss Clara Cooper, popular young people of this community, and members of prominent pioneer families of the community.

George had a fine team of horses, but no buggy, and so he went to C. H. Norris, who owned the only buggy then in Table Rock, hitched his own horses to it and in pride and happiness the young couple took their honeymoon trip....

They commenced life together on a farm west of Table Rock. For the past quarter of a century or more they have lived in town having retired from the farm.

Since they began life together they have always lived here in Table Rock, their children were born and grew to manhood and womanhood here, and two of them- Charley and Mrs. Gibbs- still live here, while Mrs. Parker lives at Wymore.

​They realize that time has wrought great changes in conditions in Table Rock and Nebraska, for they have lived through them in the years of their married life, and as they go on down the journey of life hand in hand it is the hope of their many friends that joy and happiness will follow them to the journey's end. 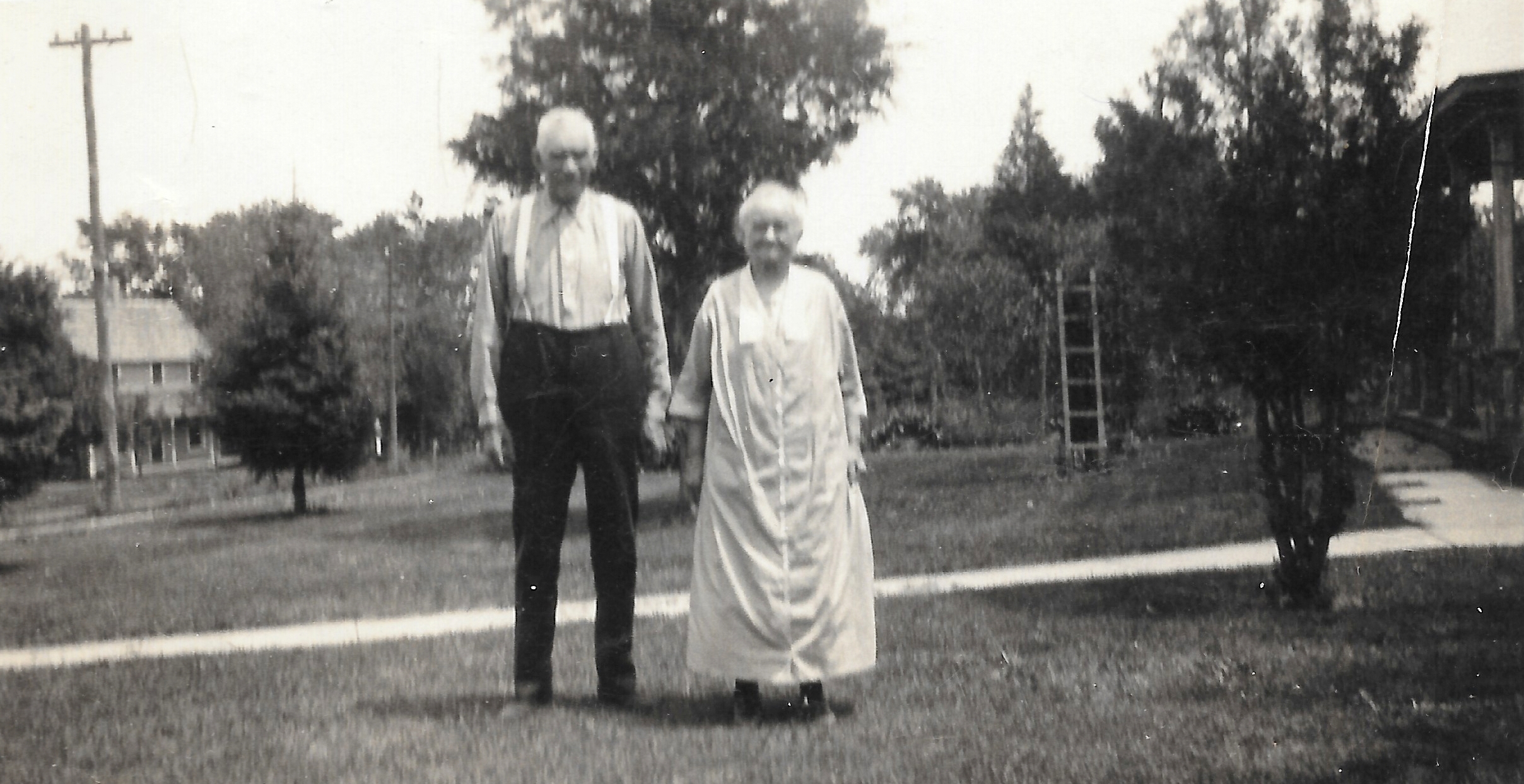 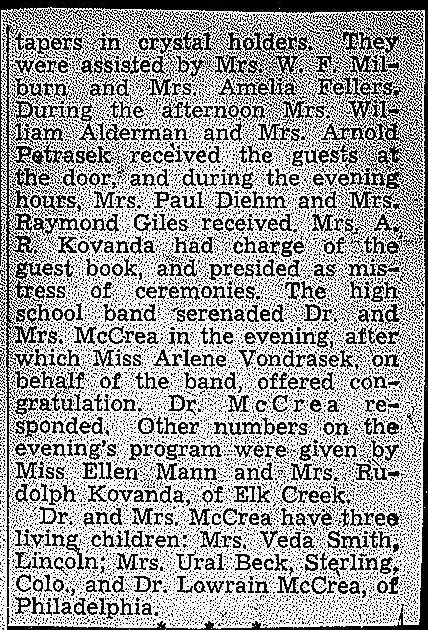 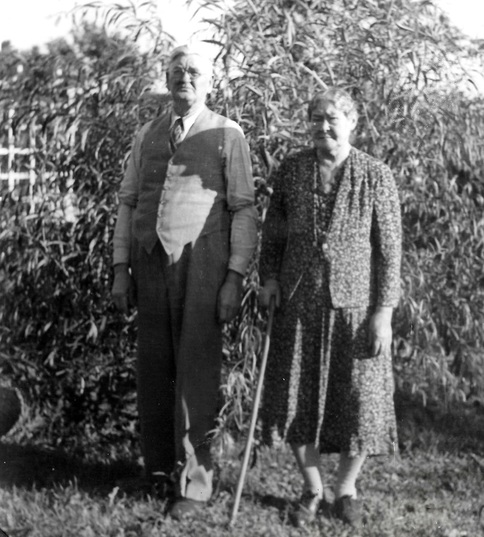 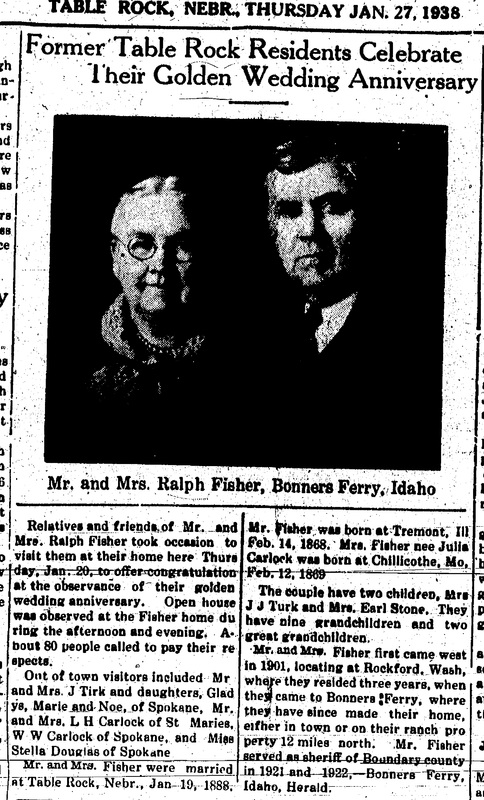 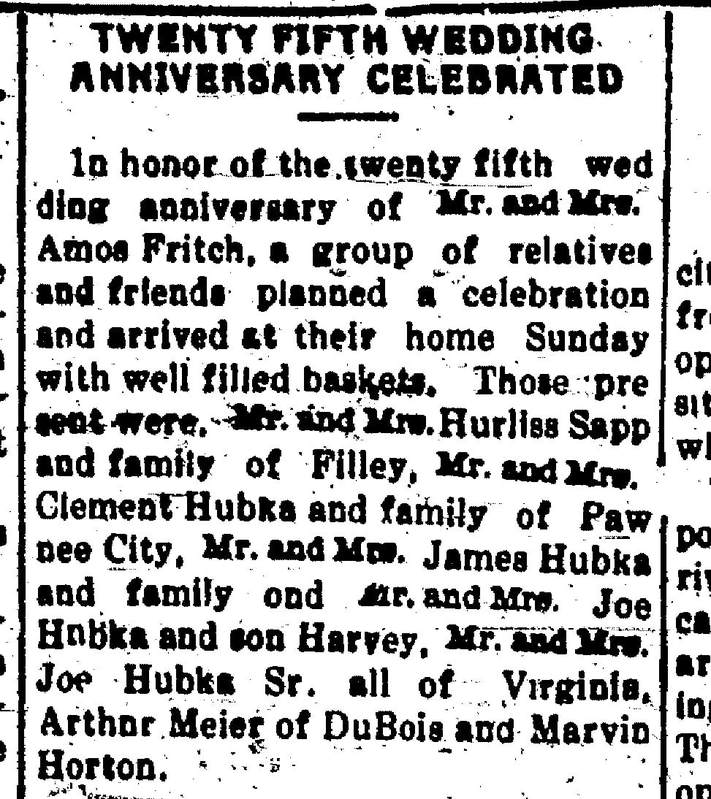 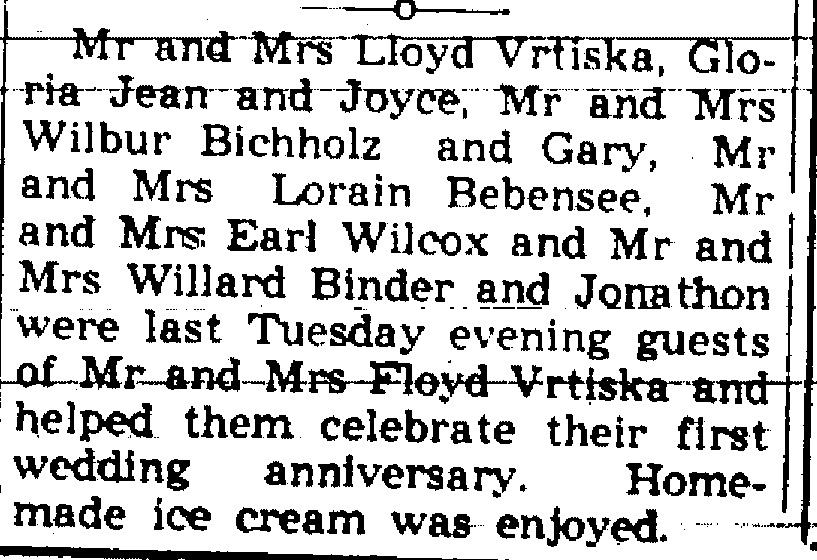 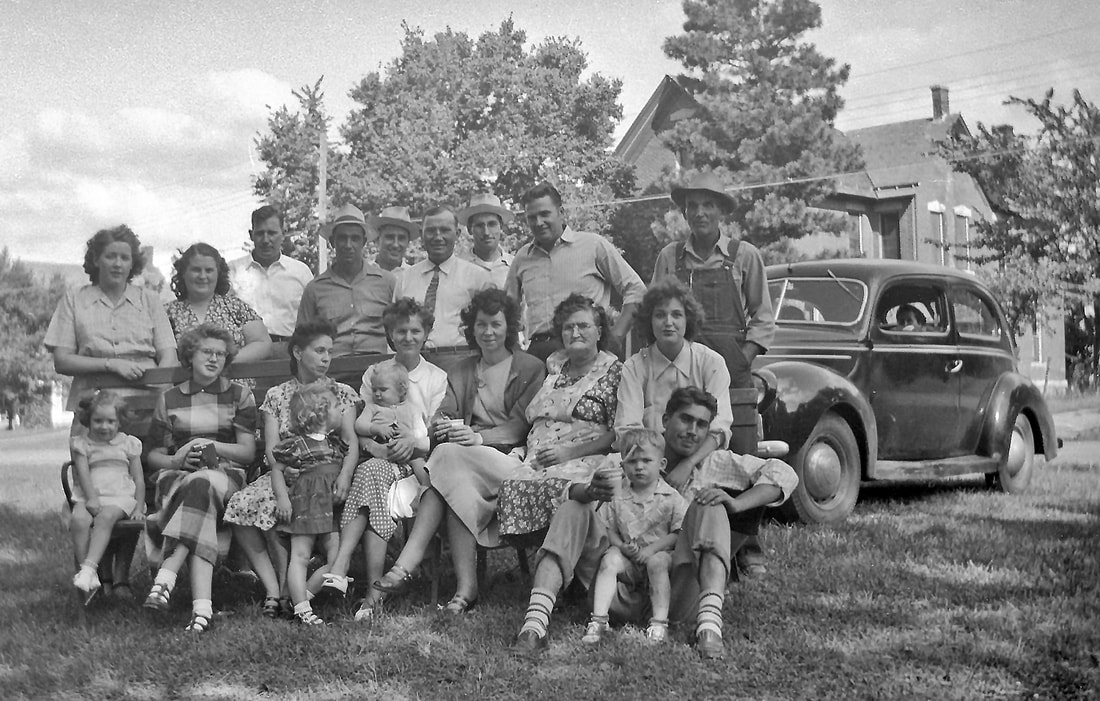 The John & Eva Harris family, a family photo shared by Ted & Nancy Quackenbush. Photo 3651. No date. Nancy says taht John is at far right and May is the one with the apron, sitting. Melvin is next to John. She thinks that is Wayne sitting at far right and if him then is probably then his wife Joyette. 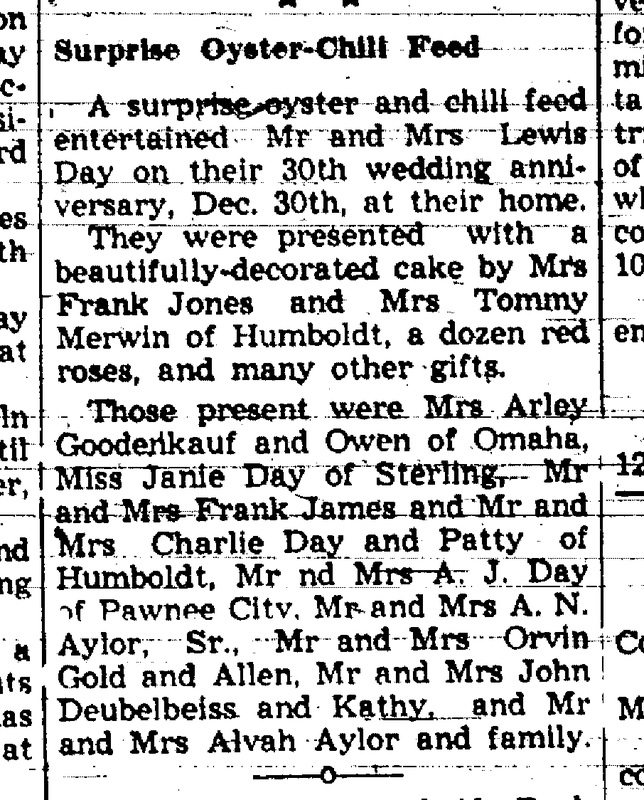 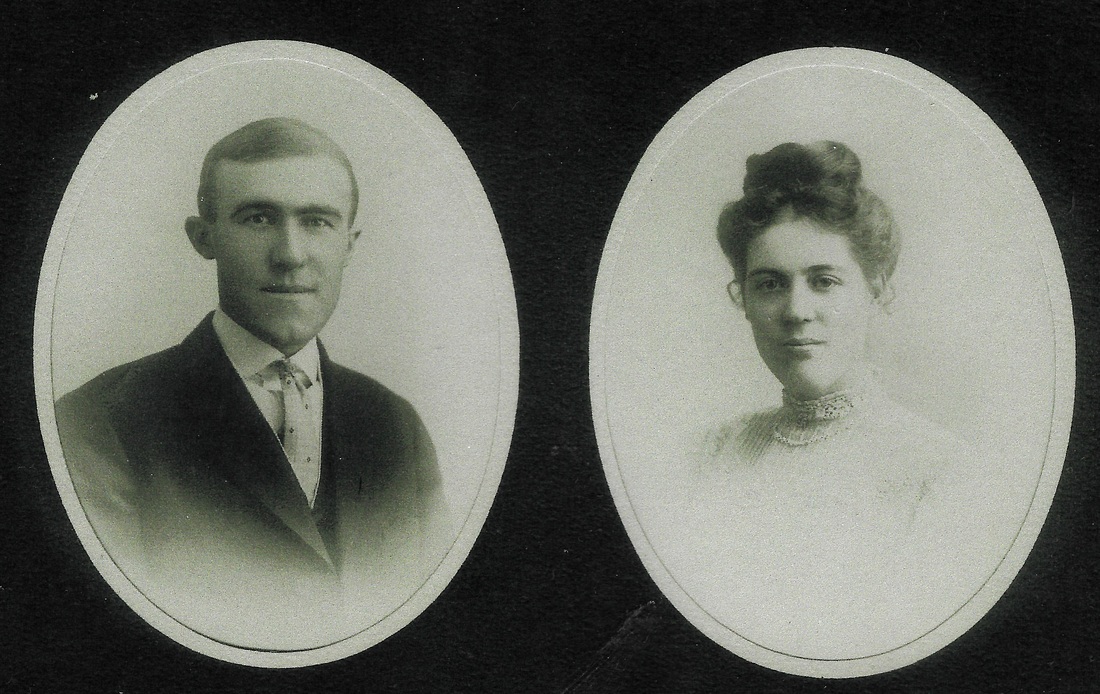 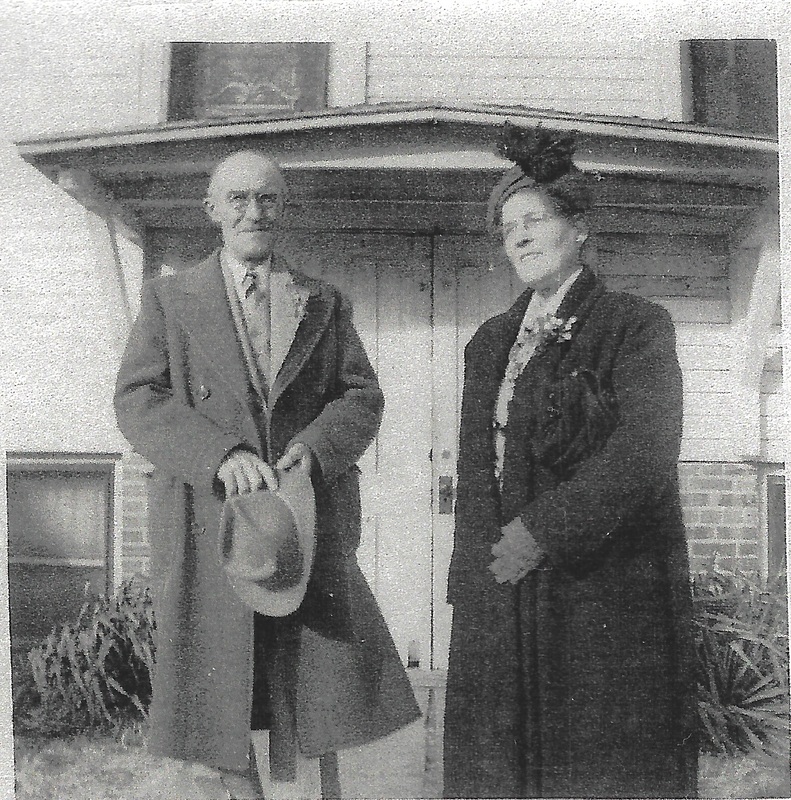 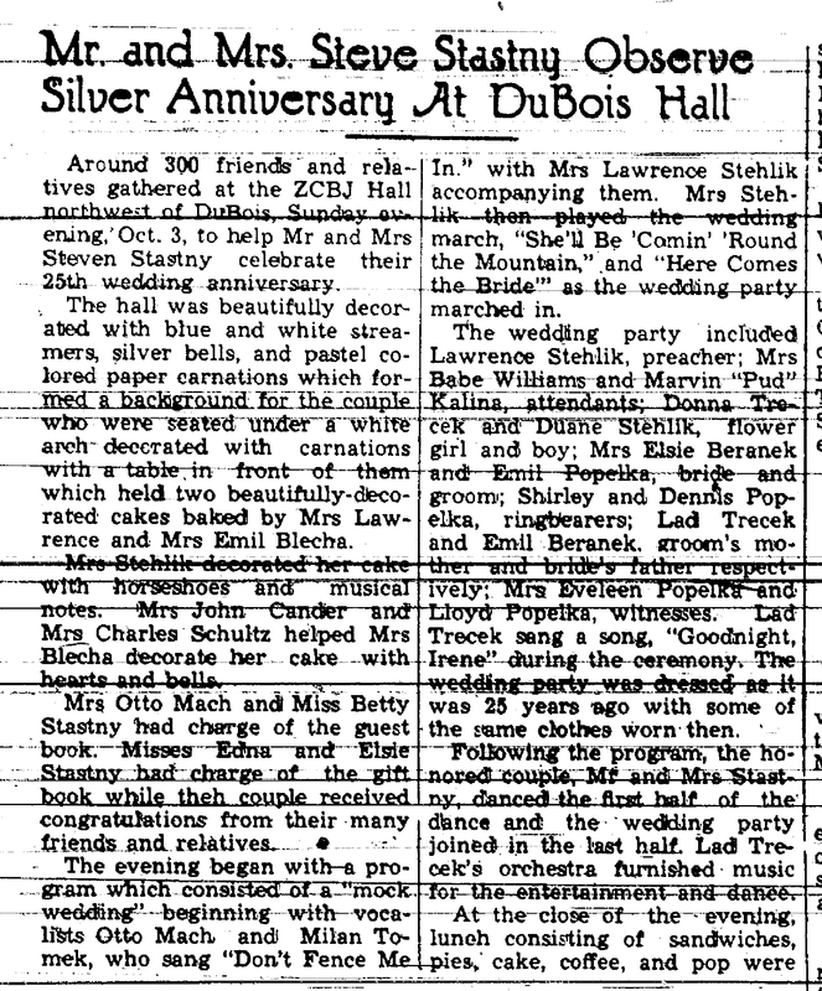 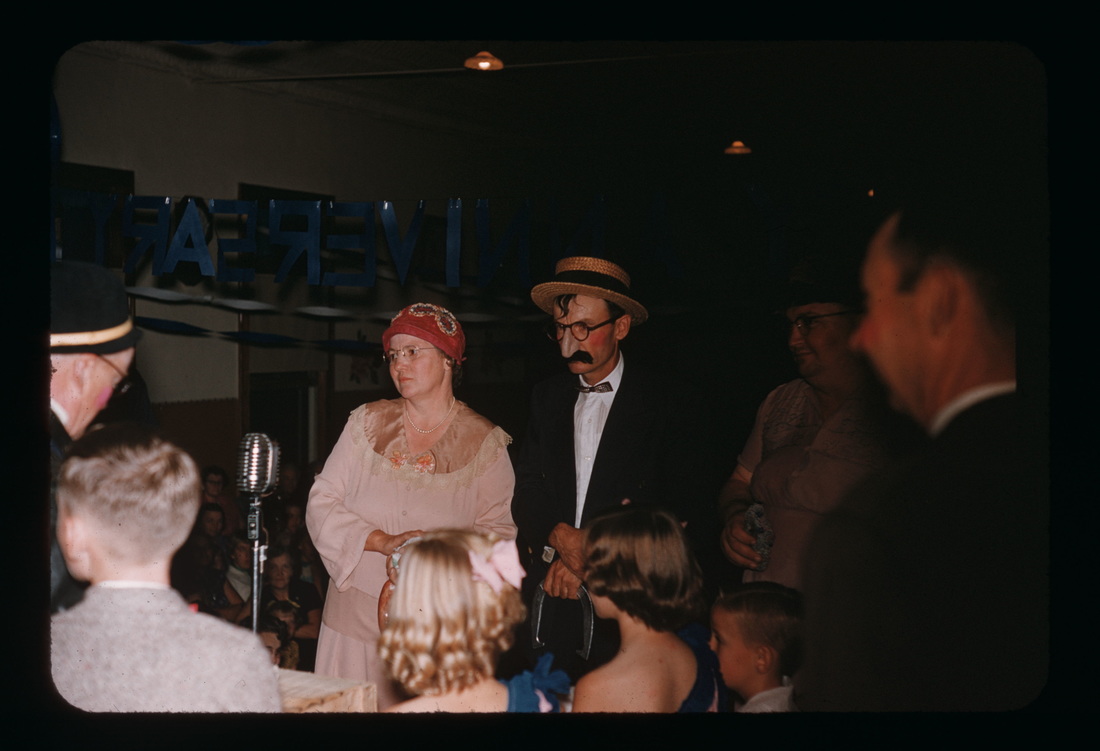 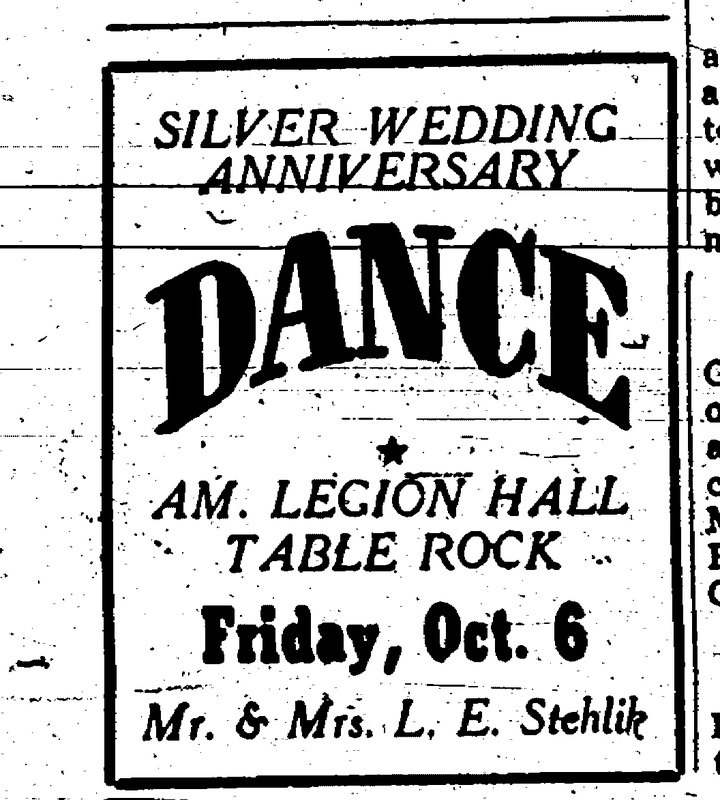 A September 1961 edition of the Argus advertised the wedding dance for the 25th anniversary of Lawrence & Nettie Stehlik. 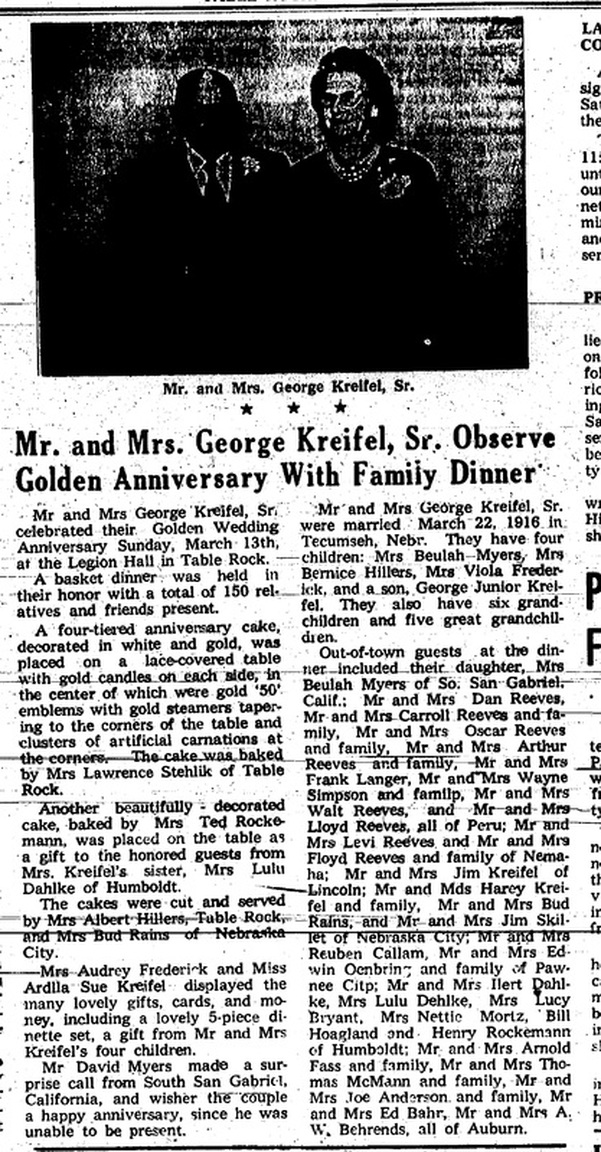