Back to infrastructure
Table Rock Seen From Above 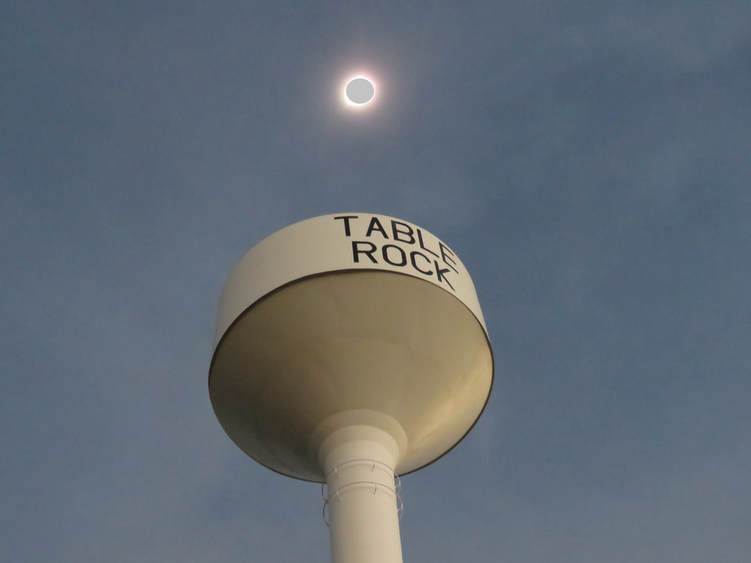 For the first time in recorded history, the moon totally eclipsed the sun as it shone down where the tiny town of Table Rock now sits. There in the Square was Scott Howells of Bennington, Nebraska, who took this photo and sent it to us with a thanks to the town of Table Rock!
​ 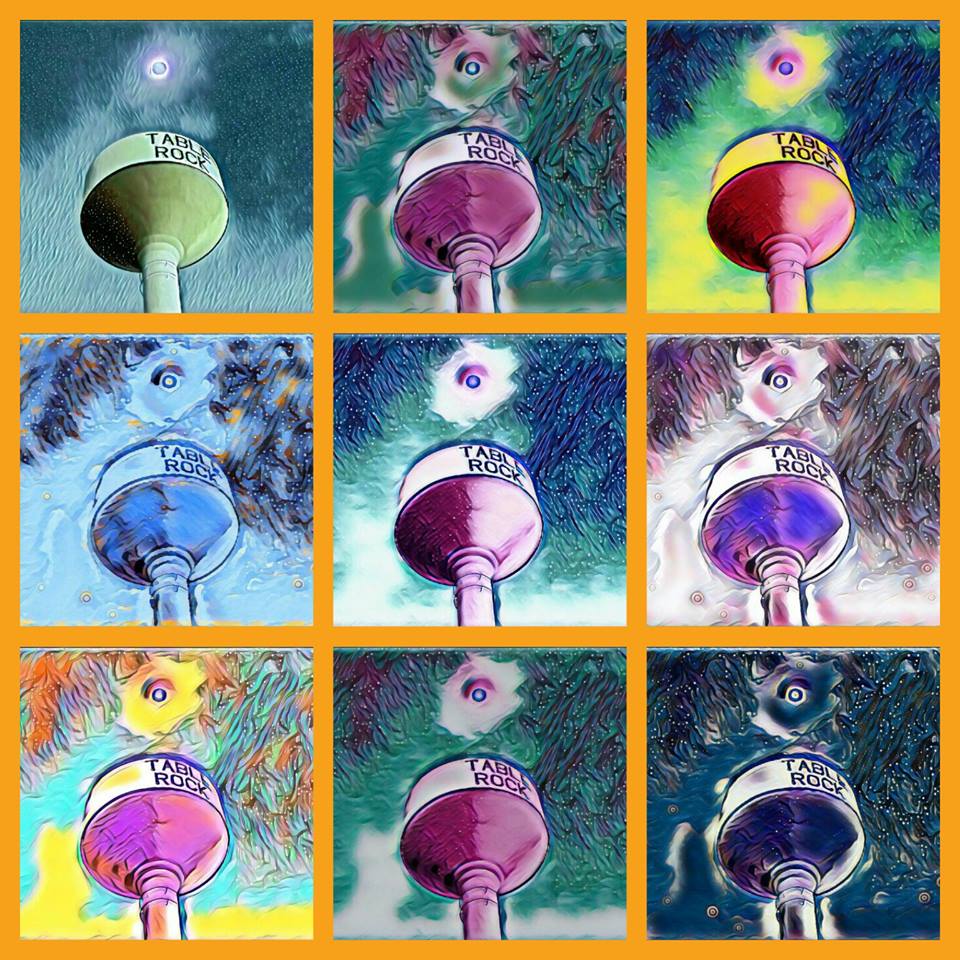 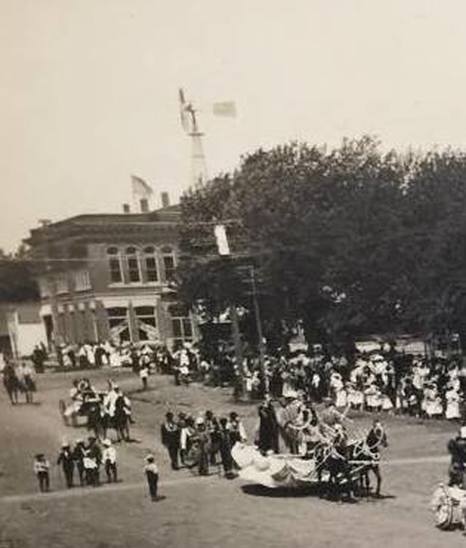 This undated photo shows a standard windmill at the southwest corner of the Square, in the general location of the Water Fountain Pagoda that was built in 1926. There was probably not a water tower at that time.  Photo 1402. 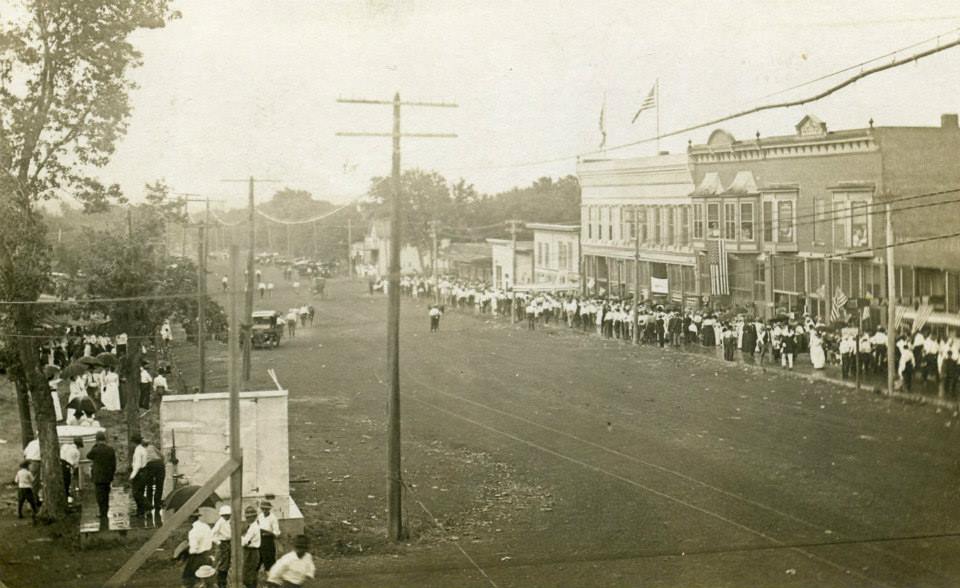 Look closely to the left to see the area of the town well in about 1912. In this picture, the windmill is gone but a pump remains. This seems to be the last picture of the city well in the Square. By 1921, the possibilities of ther wells were unsuccessfully explored and then a "water works" was instigated.

A dark water tower rises from the park.  This photograph appears to be the first photograph of a water tower in the Square. It is undated, but it is prior to circa 1948, when the concrete dance platform was added to the front of the bandstand.  It is Photo 1401b. 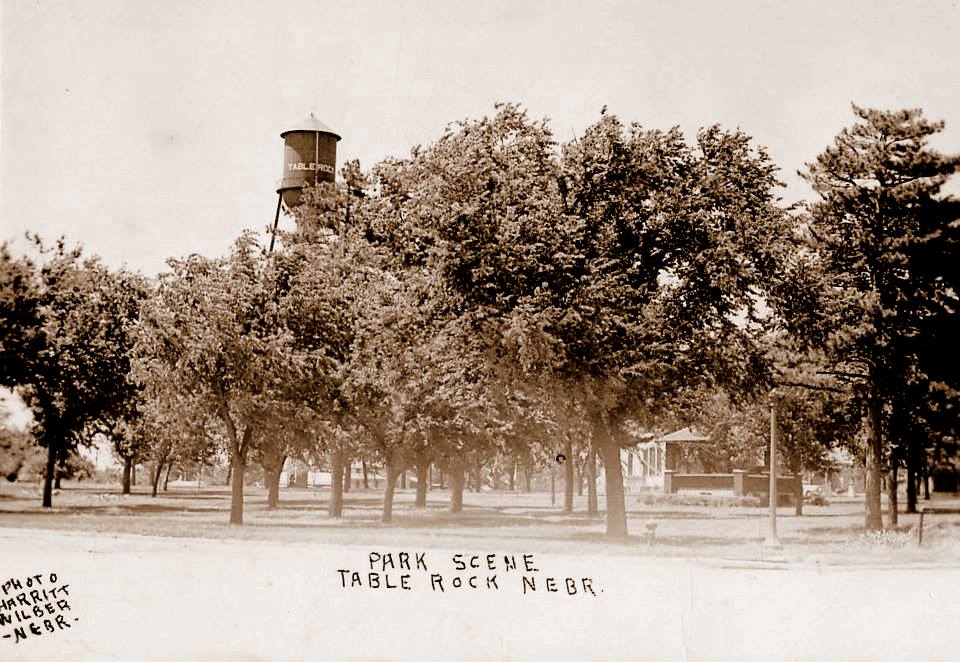 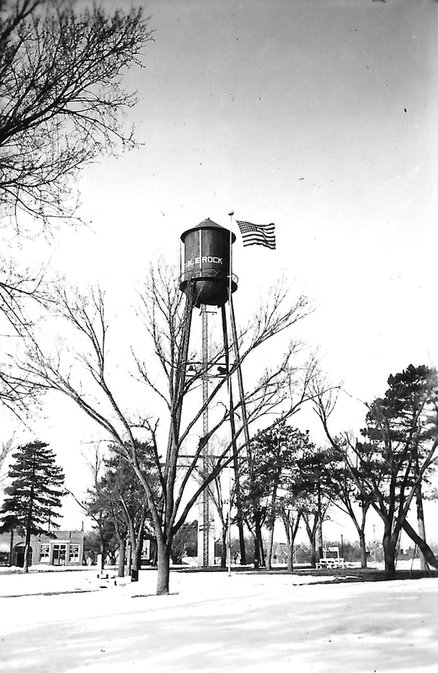 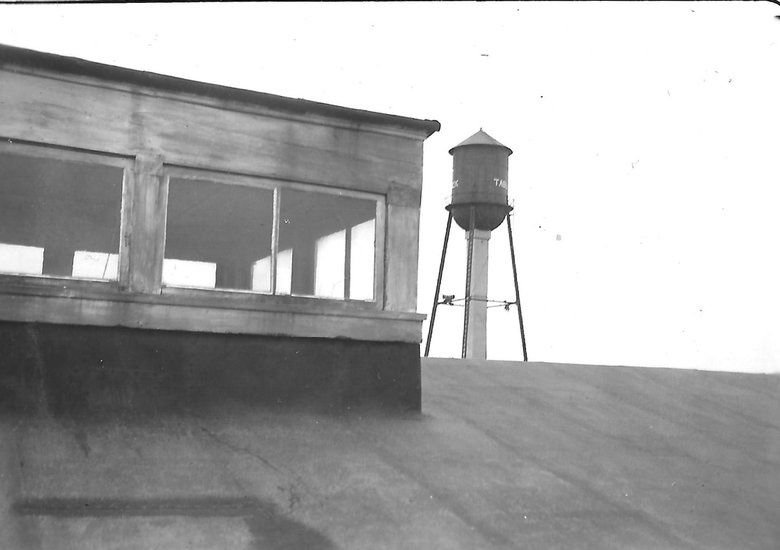 The water tower as seen from the roof of either the Opera House or the State Bank of Table Rock, by Arvid Blecha 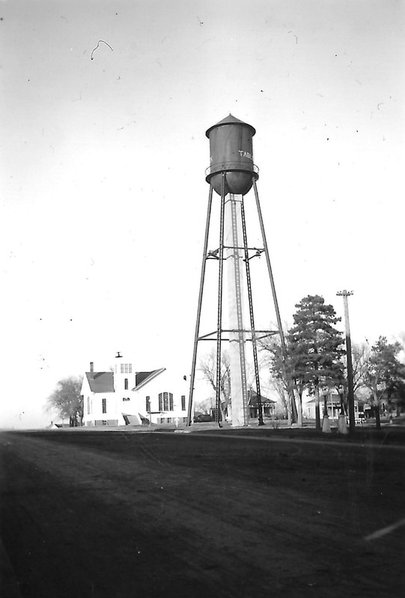 The water tower, undated, photo by Arvid Blecha. The photos in the album were mostly from late 1941 to 1942.
1950 - McCourtney steam engine thawing riser pipe of the water tower.  This photo is in the collection of the Table Rock Historical Society but without any annotation. However, member Delores Penkava has the same photograph, which has the information about what is going on.  Her father was Bruce McCourtney, her grandfather Charlie McCourtney.  Photo 582. 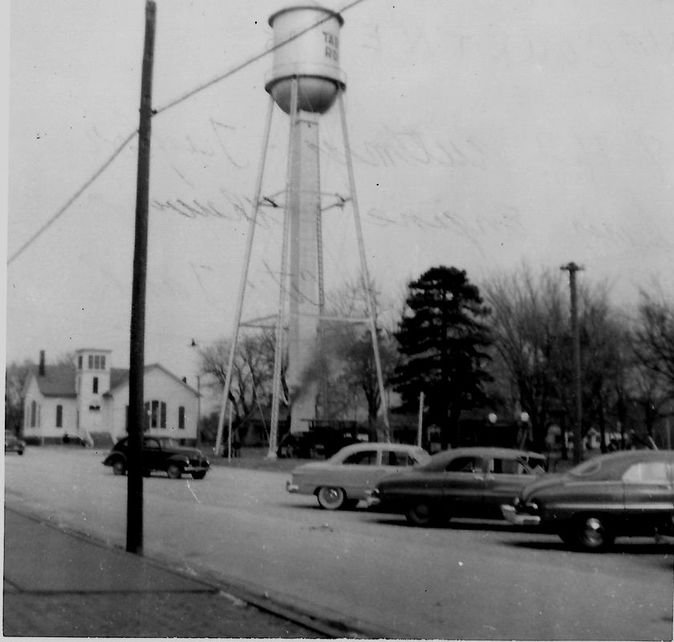 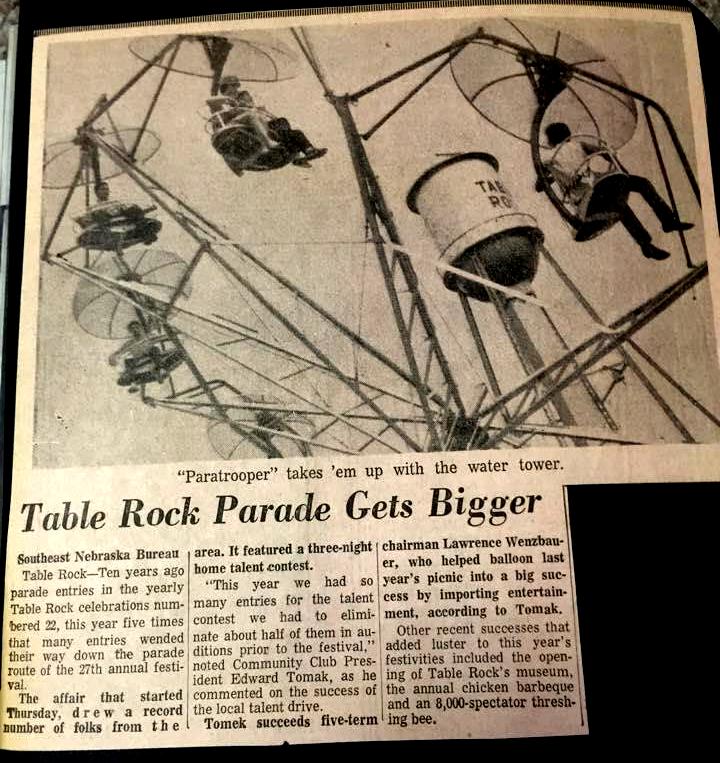 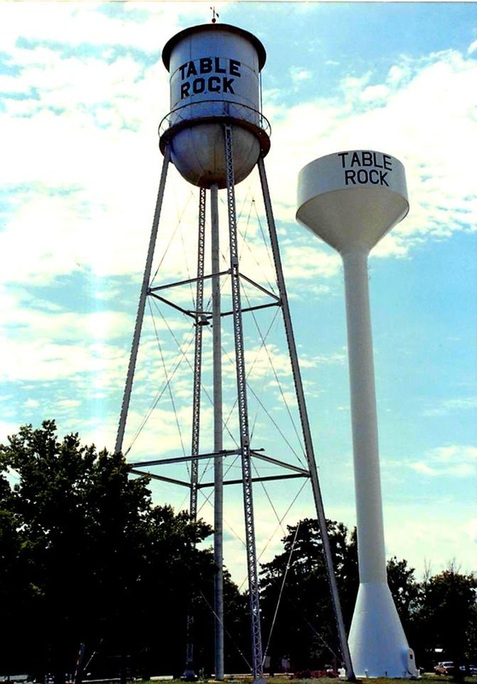 Kim Vrtiska took this picture during the transition to a new water tower.  He says that he likes to tell kids that the two Table Rock towers were for hot and cold water. Photo 752. 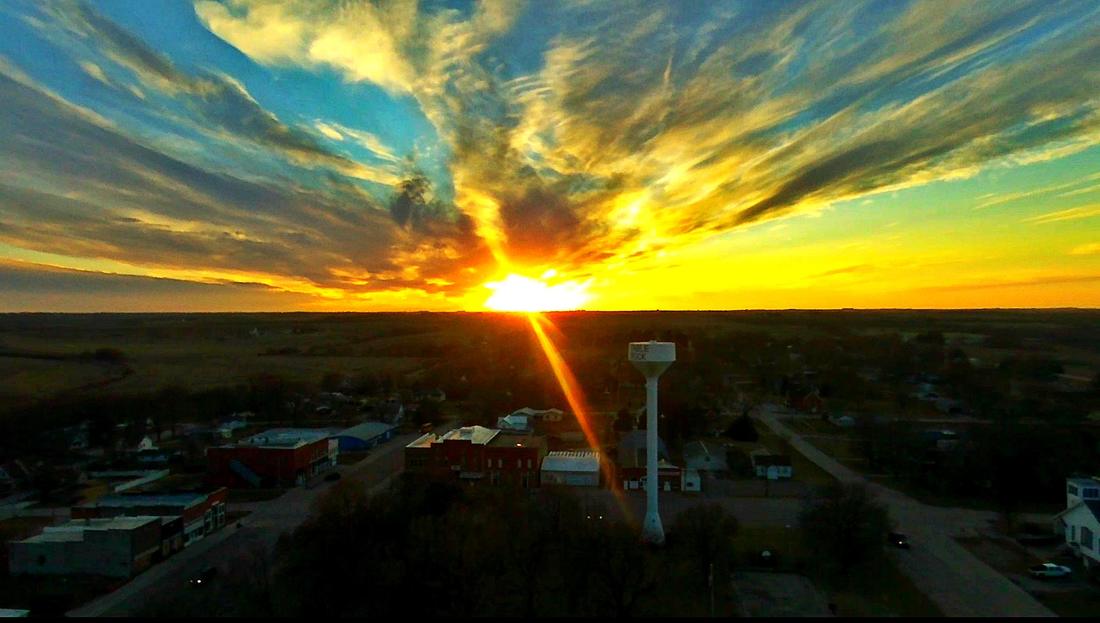 A slide show of four picture of the August 2016 water tower work, all by Suzanne Sitzman Ellis 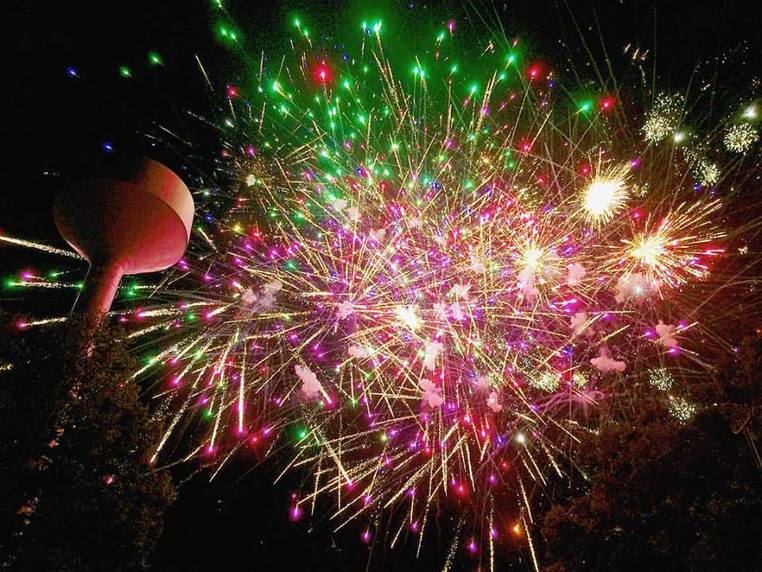 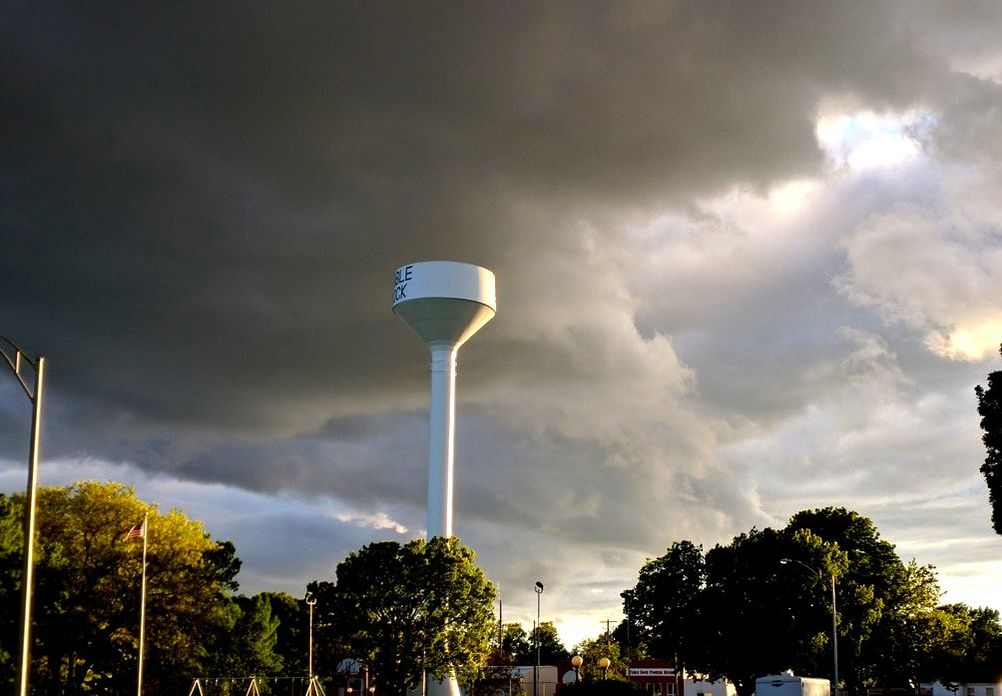 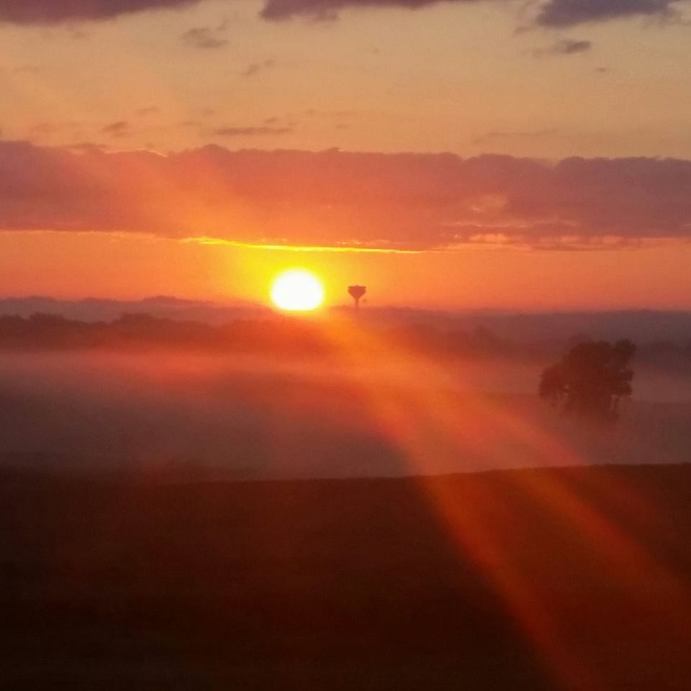 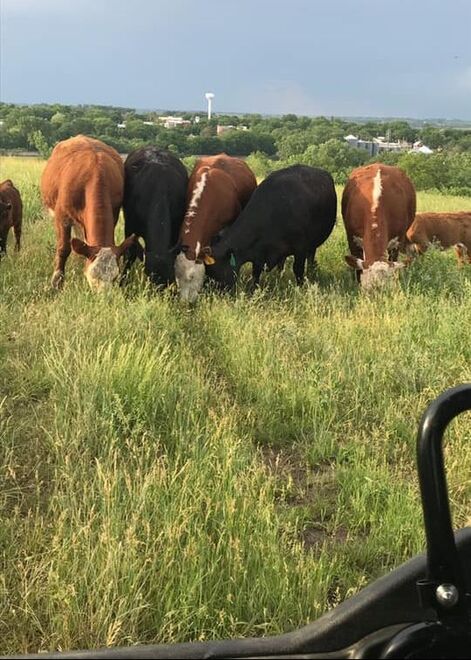 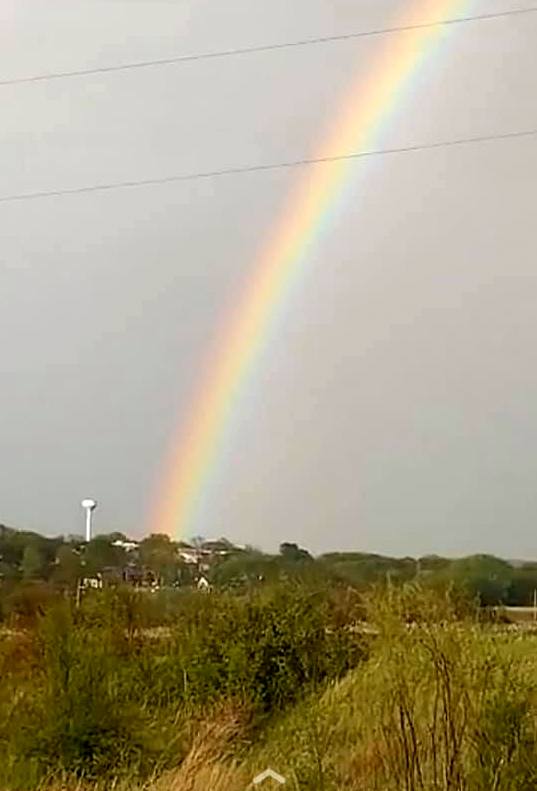 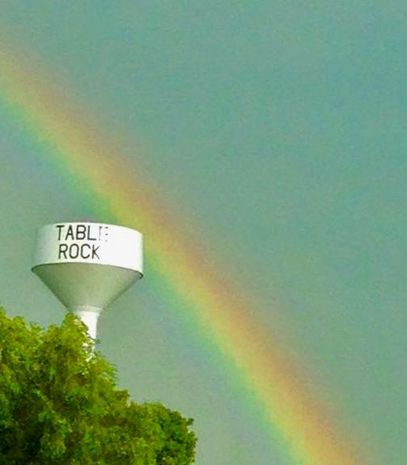 Missy Freeman took this on July 20, 2017. A huge cloud came over in the later afternoon along with a huge clap of thunder. Rain poured down even as sunlight was shining from the edge of of the cloud. Then this rainbow came out. Glad Missy caught it! 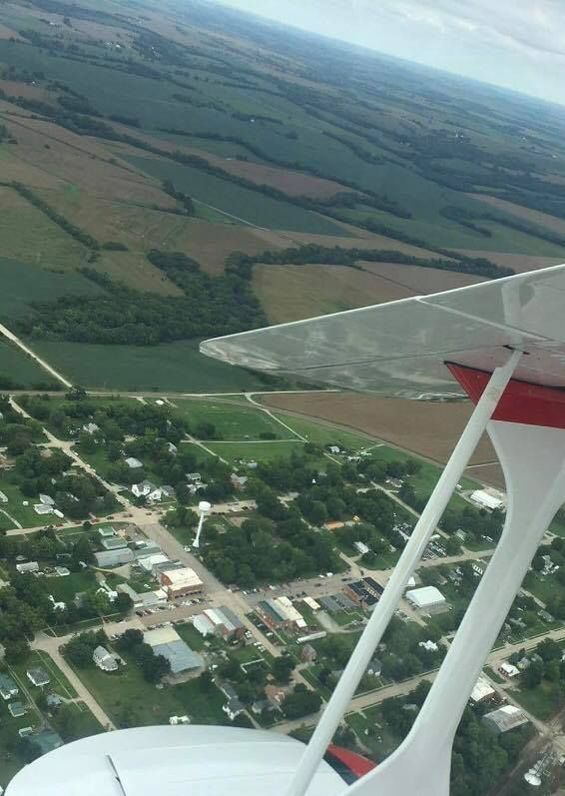 Pilot Bruce Bernadt took this picture. Looking from the southwest on September 8, 2018. 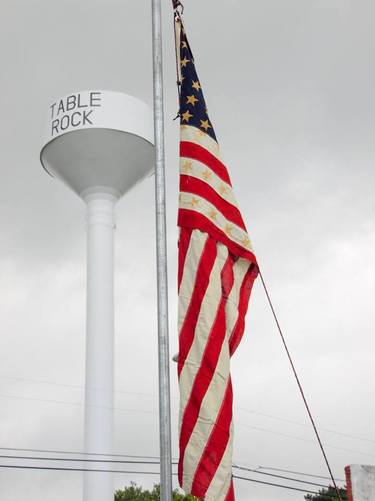 On "Old Home Day" in 2017 (the Saturday of Memorial Day weekend), the burial flag of Clarence Morton was raised on the Historical Society's flag pole outside the Veterans Museum to honor this young man who died in a Japanese prisoner of war camp in 1942. It was raised in a ceremony by Boy Scout Troop 355 of Humboldt, Their scoutmaster, Roxie Tate Snethen, took and shared this photo. 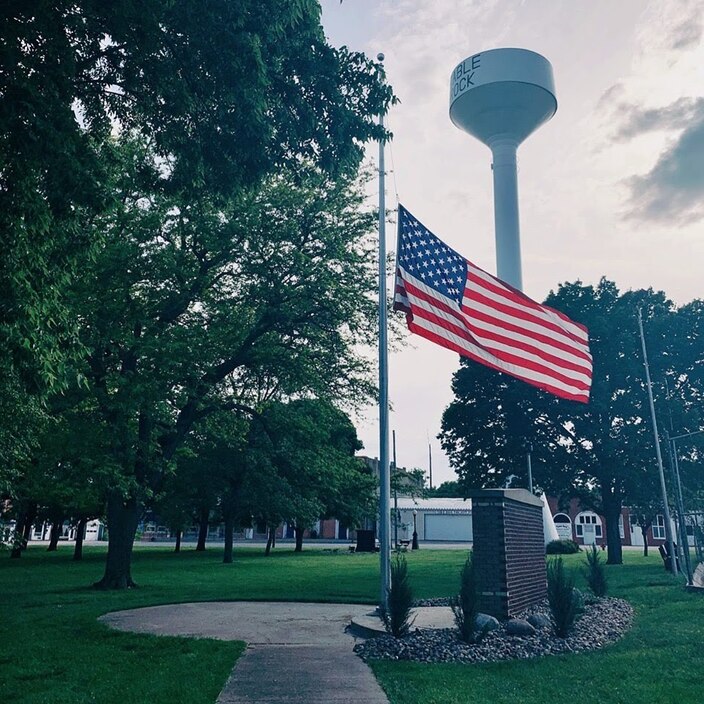 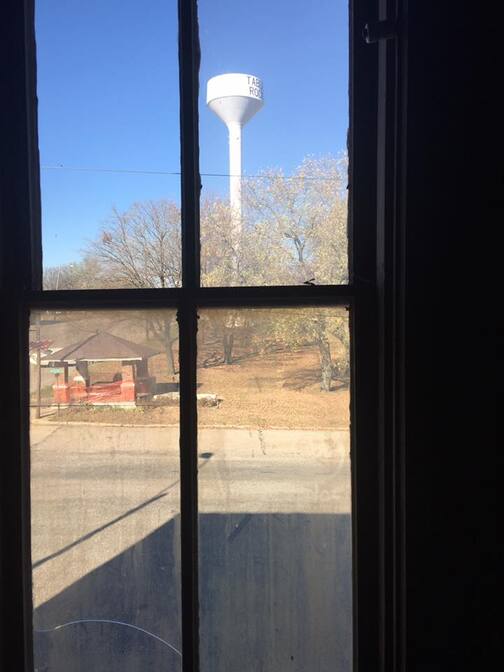 Taken by RanDee Sochor Kruger in November 2016 as she helped clear her grandpa Joe Sochor's store after his death. This was taken from the 2nd story of the historic building, which has seen all of the water towers over its years. Photo 3559. 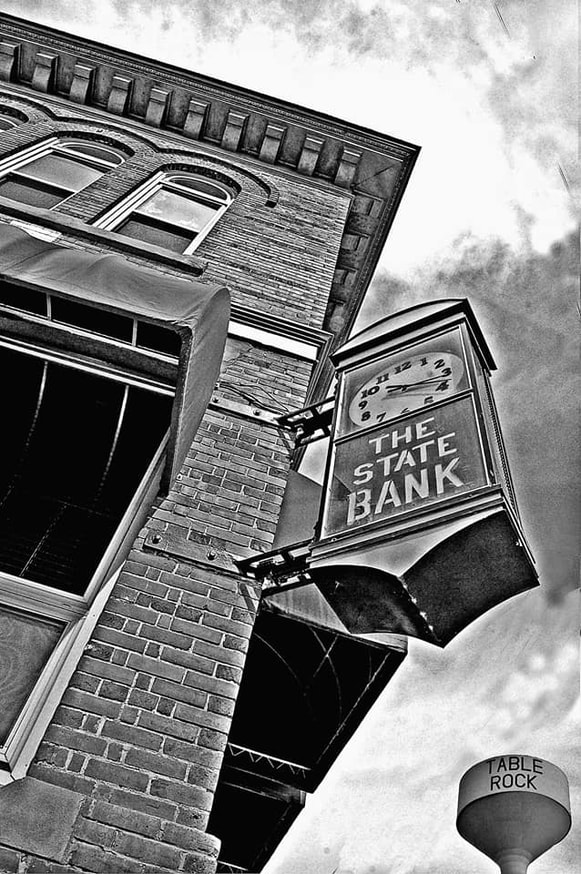 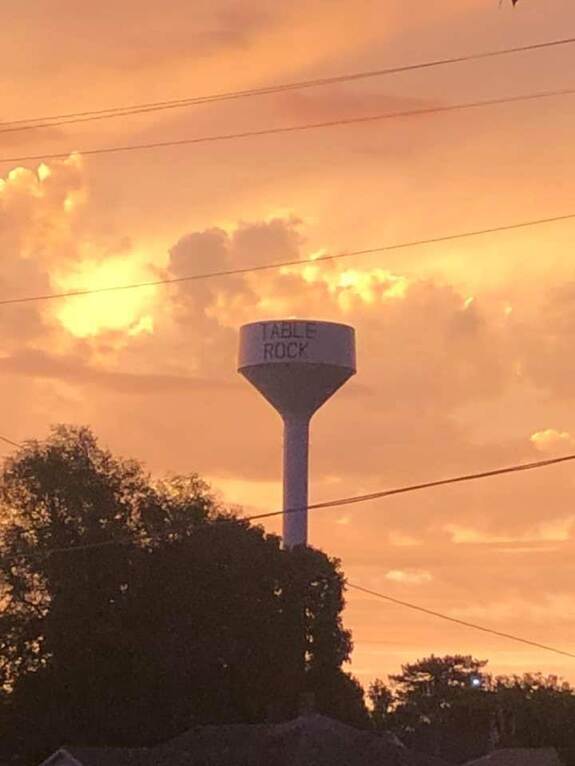 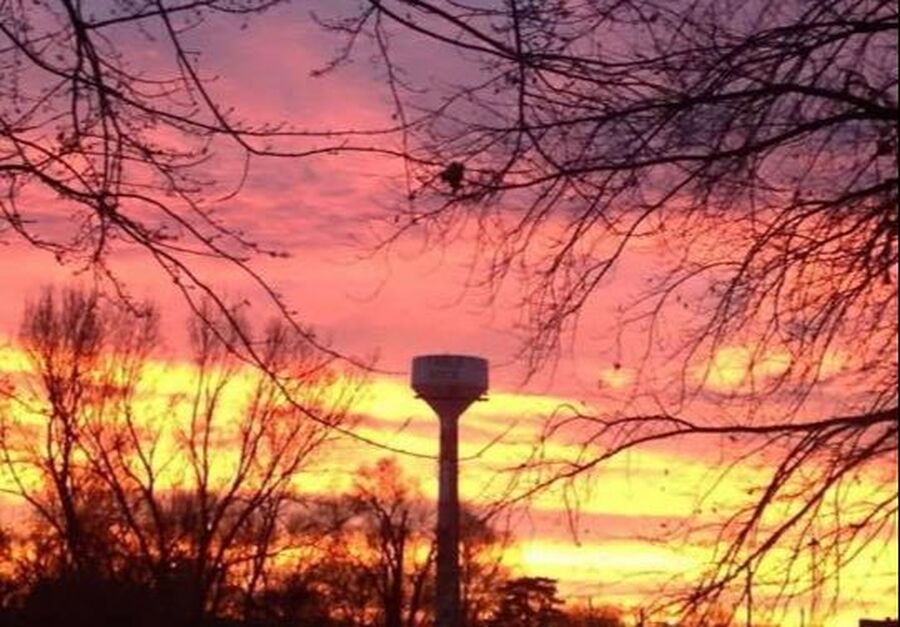 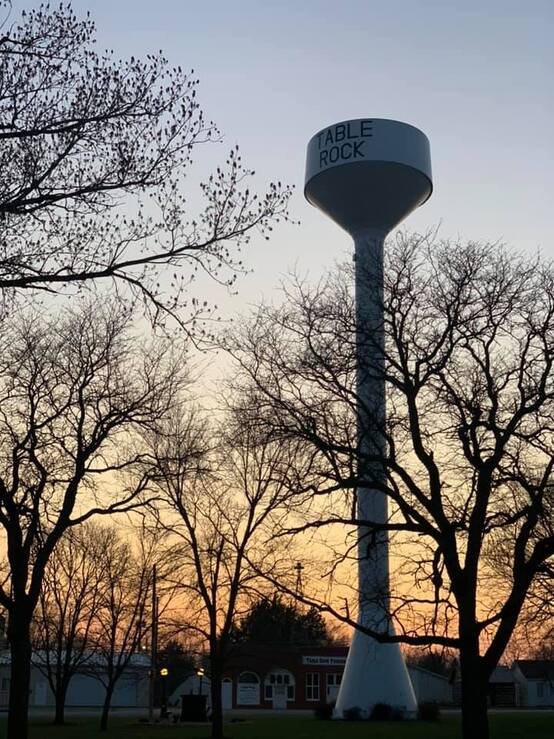 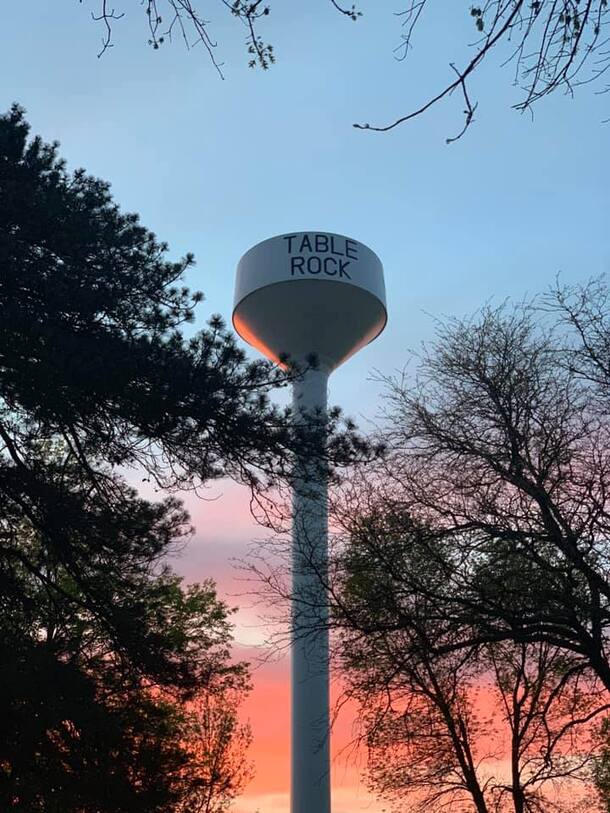 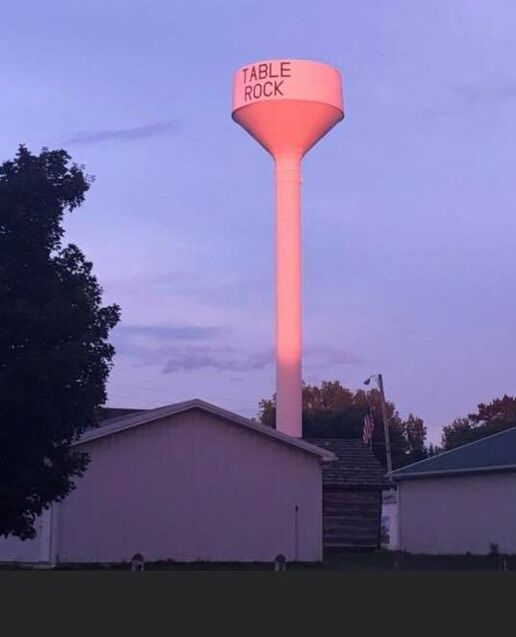 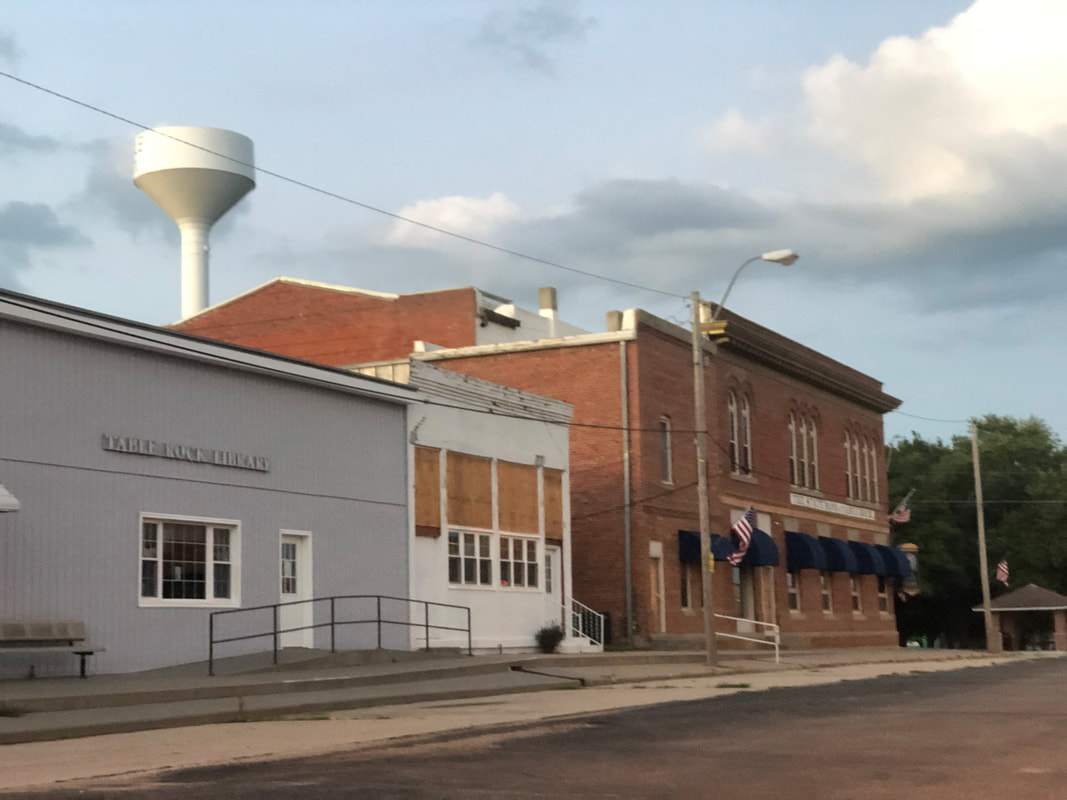 The weather vane from the tower that was most recently placed is in the Pioneer Museum.  It is super heavy. 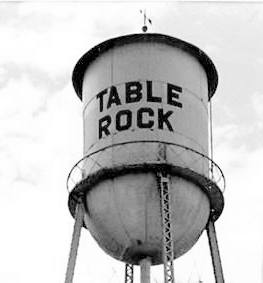 Observe the bullet hole in the feather of the vane.

In July 2015, long after the statute of limitations expired, the bullet hole was mentioned on Facebook by Larry Layden.

A post was made citing various mysteries from town history. Who is buried under the limestone tombstones? Who are the women in white with the goat?  What were the total number of teenage vehicular circumnavigations of the square, and before cars, did teenagers cruise around the square on horses?  How many boys climbed the water tower over the years, and did any girls do it?

Larry posted, "Mystery number 20: Who shot the hole in the wind arrow that used to sit on top of our watertower? The one in the Table Rock Museum? Looks like a .30 cal. Hole and would have been an easy shot for an expert Marine rifleman standing by the cellar of J. C. Layden ' s house. Just wondering."

J. C. Layden was Larry's dad, and Larry was probably not talking about his twin sister Lois since she was never in the Marines.  Like Larry.

Gordon Bethel's photo from the tower looking EAST.  The steam train in the distance, buildings in town in the foreground.  What a view!  Note that the scanner currently being used was not big enough to scan the whole picture at once so two views have been spliced.  Gordon was born in 1902, so he climbed the water tower to take this pictures somewhere between the ages of 18 and 28.

Gordon Bethel's view from the tower looking SOUTH.   Brickyard chimneys in the background, buildings along the south side of the square in the foreground. Again this picture is obviously spliced.