Newsletter article about the tombstones, April 2015
Two limestone tombstones in the northwest corner of the Table Rock Cemetery have long been the subject of speculation.  One is large and the other is very small, as for an infant. Two stones of the latter once were tiled and made like the roof of a house, but they have settled over the years, perhaps more than 150 years.  But wait, there's more! 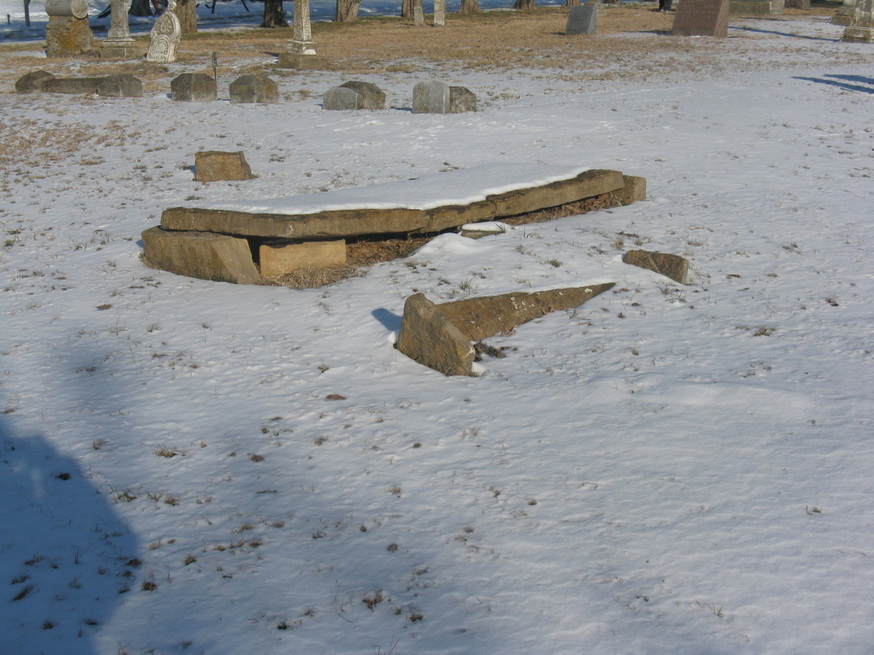 There is virtually no mention of them, but there are also three other stones made of the same apparent material lined up on the other side of the larger stone here.  No inscriptions are apparent.
Here you can see the orientation of those three smaller stones to the large one, seen to the right, arrayed in a row running east and west, one beyond it and the other two coming alongside it:

Here are close ups of each of the smaller stones.  Are they related to the other two stones?  Are they from the same era but, by their distance from the other two, not of related persons? 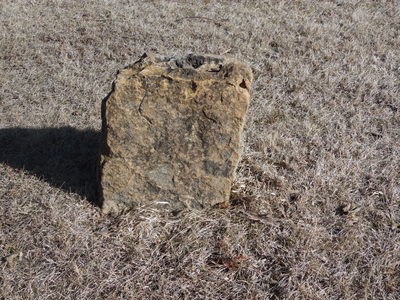 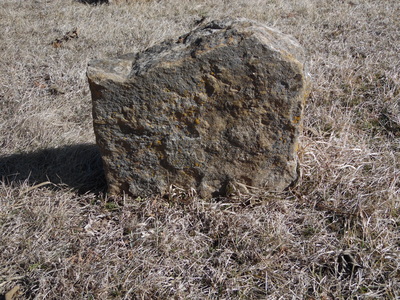 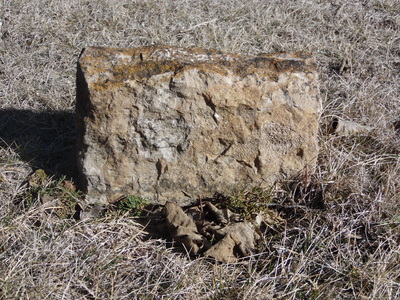 Only the larger stone has any apparent inscription on it. Historical Society member Sharla Sitzman reports that in February 2015 she found the inscription entirely legible on a late winter afternoon when the sun was close to the horizon, creating distinct shadows, see the picture below.( 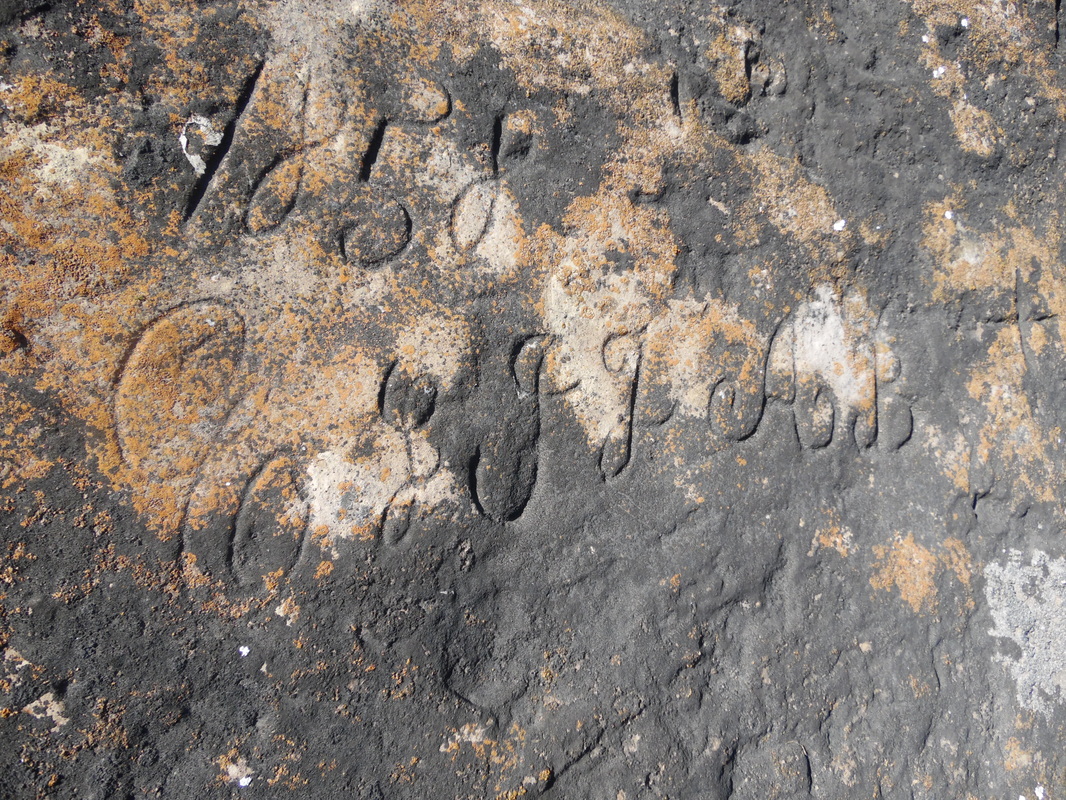 The letters are clear. The first -- E L -- and the last - A B -- are clear.  The middle letters require someone familiar with scripts of the time.

If it is a name, does it use the Christian name-surname convention we use here now (John Smith) or the convention used in some other places in the world (Smith John)?

As of November 2015, Historical Society member Sherry Winkinhofer deciphers the lettering as "ELIZAB" as in the first letters of Elizabeth, letters which could also represent "ELIZA B."   What do YOU think?
Here are two letters written in 1931 by C.W. Chambers to Judge Raper to report and discuss what his mother told him about the person buried there.

Chambers' mother had told him that the larger one was of Mary Hinton, who was associated with the mill east of town.  She might not have been here when it happened. The family came here in 1857 but according to C. W. Chambers' obituary, after a year they left and did not come back until 1867.  Did the event happen while they were?  It depends on when in 1858 they left.

The Table Rock Cemetery was not established  until 1880, although there is at least one stone there from 1870.  Chambers speculated that Hinton, if that is her grave, may have been buried by the mill but later moved to the cemetery.

Chambers rejected stories (still heard in 2015) that the grave was of one of the horse thieves, pointing out that the thieves were hanged in 1864, while the stone here does have the date 1858.

Chambers also offers poignant observations about the unknown persons grieving their loved ones.

The actual letters follow, but first here are transcriptions.

Undated letter, probably the earlier of the two.

“Judge Raper.  Dear friend – Your interest in the burial of a woman – on bottom west of the (Ace?) Heywood farm.  Mrs. Bousfield might easily be right – as his stepfather John Murley lived on farm near the Haywood farm [a used in this spelling, in prior spelling].

You have the name Clinton – I have heard that name among the early settlers but there is a grave i the T.R. Cemetery noticeable as it is covered by stone in box form, sides a foot or more high of one long stone each side, ends enclosed.  And one long wide stone covering the top.

Am afraid this stone has been taken away as I don’t remember noticing it lately. If so the vandal who did the deed should be sought out and punished.

My mother has said it was grave of a woman who lived at or near the old mill, name as I remember it Mary Hinton.  I think there was a saw mill there at that early day.

This work should have been preserved, a monument to the man who loved her and was left alone to continue the battle of life in the early day.  It is a heart gripping thought and one that might bring tears from the eyes of many folks.  I will find out and let you kow if this stone work is still there or not.

P. S. "I’ve been to the cemetery. The grave and stone work is there alright.

There is also a small grave beside it covered in house roof fashiokn with flat stones leaning together over it. The large flat covered stone is about 3 x 8 feet, I judge.

It’s an intestersting instructive relic of those trying to brave early days. I hope you will try and see it.

I will try to find out more about the identity of the family. Possibly Mrs. Norris or Mrs. Holmes remember them, as can Foale also might.


[Note from S. Cerra: Mrs. Norris is presumably a reference to Fannie Giddings Norris, daughter of C. W. Norris, generally considered Table Rock’s founder; she came with her parents in about 1857.  The reference to Mrs. Homes is presumably to Lydia Griffing Gere Holmes, another original settler who came in 1857 with her family as well.  She first married John Gere, who is buried in the Table Rock cemetery with a stone that says “Killed by Indians").

This letter is dated June 4, 1931, to Judge Raper.  “Judge Raper – You interested me about the burial of a woman as told you by Mrs. Bousfield (sic?). I have been interested in a stone enclosed and covered grave in T. R. Cemetery which my mother said long ago was the grave of a Mrs. Hinton who had lived at the mill.  A little book got out by the Methodist Woman’s Guild says John Hinton started the mill here in 1855.  John Fries completed it as a saw and flour mill in 1857.  The book also names a George Hinton.


You have the woman Bousfield told you about as Clinton. I suspect she is the one buried in the TR Cemetery and she may have been buried near the mill and later moved to the TR Cemetery after it was laid out.


Possibly you could find out if any man named Clinton had taken land near Table Rock in either TR or Sheridan precincts by the records at court house, Sections 4 or 5, or 32 or 33.


I don’t doubt a lot of what you lawyers call (parol) hearsay testimony can be got to support of my theory about this.


Some woman standing by this grave Decoration Day said they had been told the three hanged horse thieves were buried under this stone. The stone is inscribed 1858.  The men were hanged in 1864.


A child’s grave beside it is protected house roof way by two stones leaning together.

These graves are near the N.W. corner of the cemetery. So you can easily find them if you shouldcome over to see them.


Well you started this and by setting all the info I can about this process of (cancellation?) hope to get the real facts, though it’s pretty old.


Table Rock was first laid out on north side of Nemaha near the famous Table Rock.  John Hinton may have taken the land the mill was located on.

If you are gathering material for a book maybe my letters might come in useful to you.


Anyway you ought to see this grave and its protective stone work.


And go down to the Table Rock all alone and shut your eyes and think of the hardships and courage and hopes of those first settlers.  No doctor nearer than South Fork – Dr. Cromwell. Coffins made  (illegible) and graves dug by kind neighbors.  No operations costing $300 and up.  No 3-4-$500 funerals. No funeral limousines at $30 a trip no matter how short.  No systematic robbery in all lines – for why – the people have nothing to be robbed of and they soon won’t have things go on as they are. 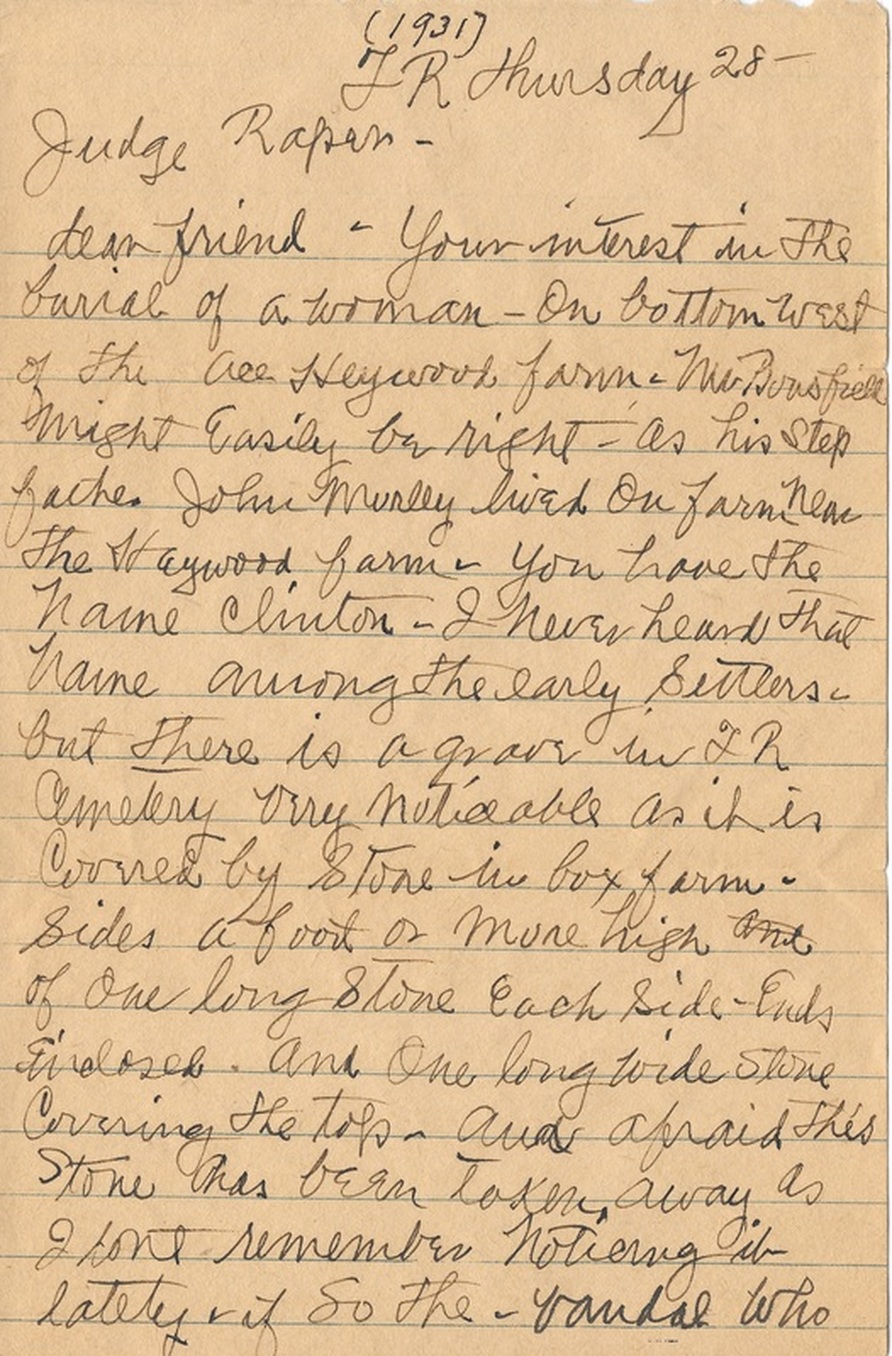 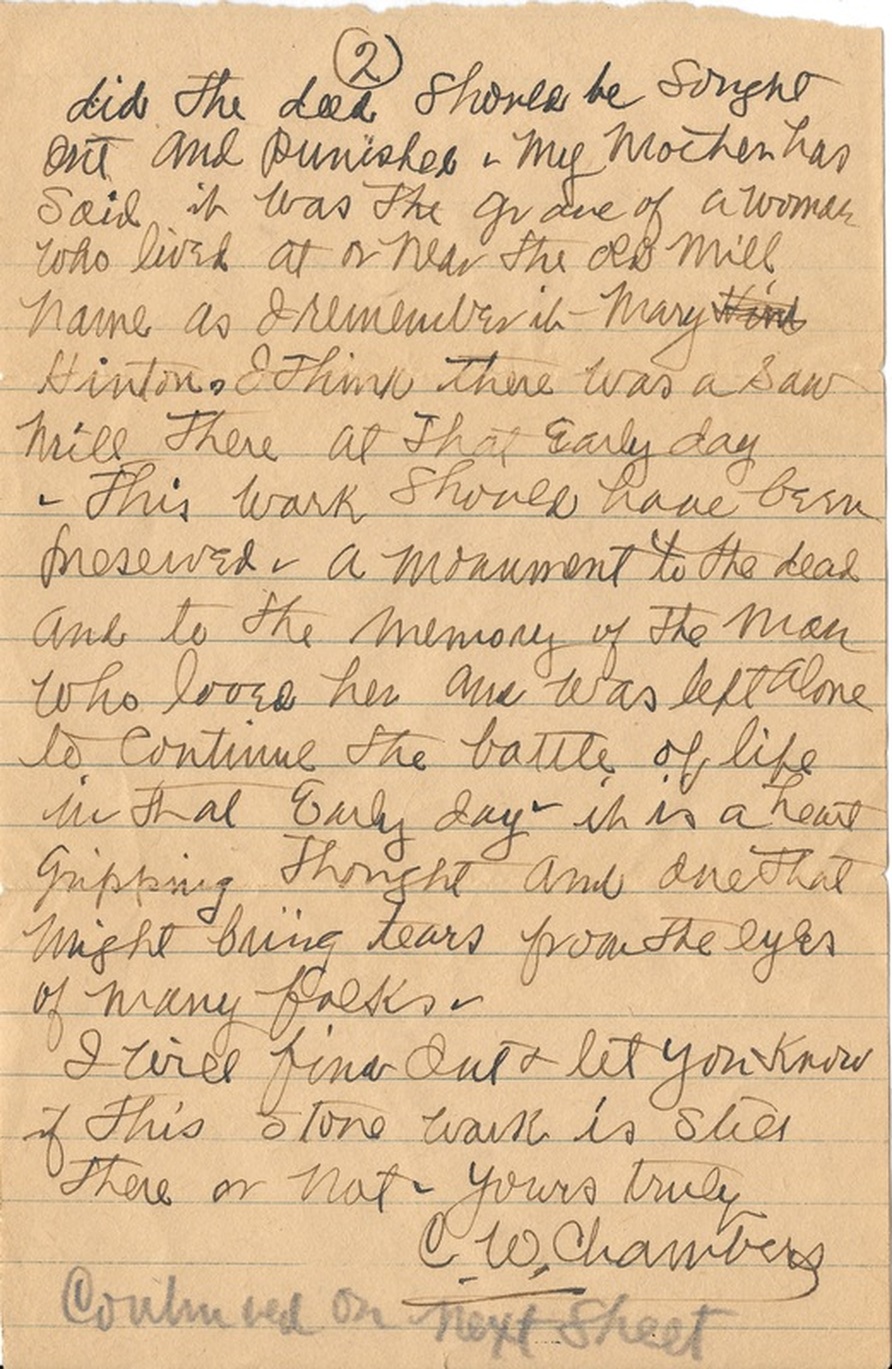 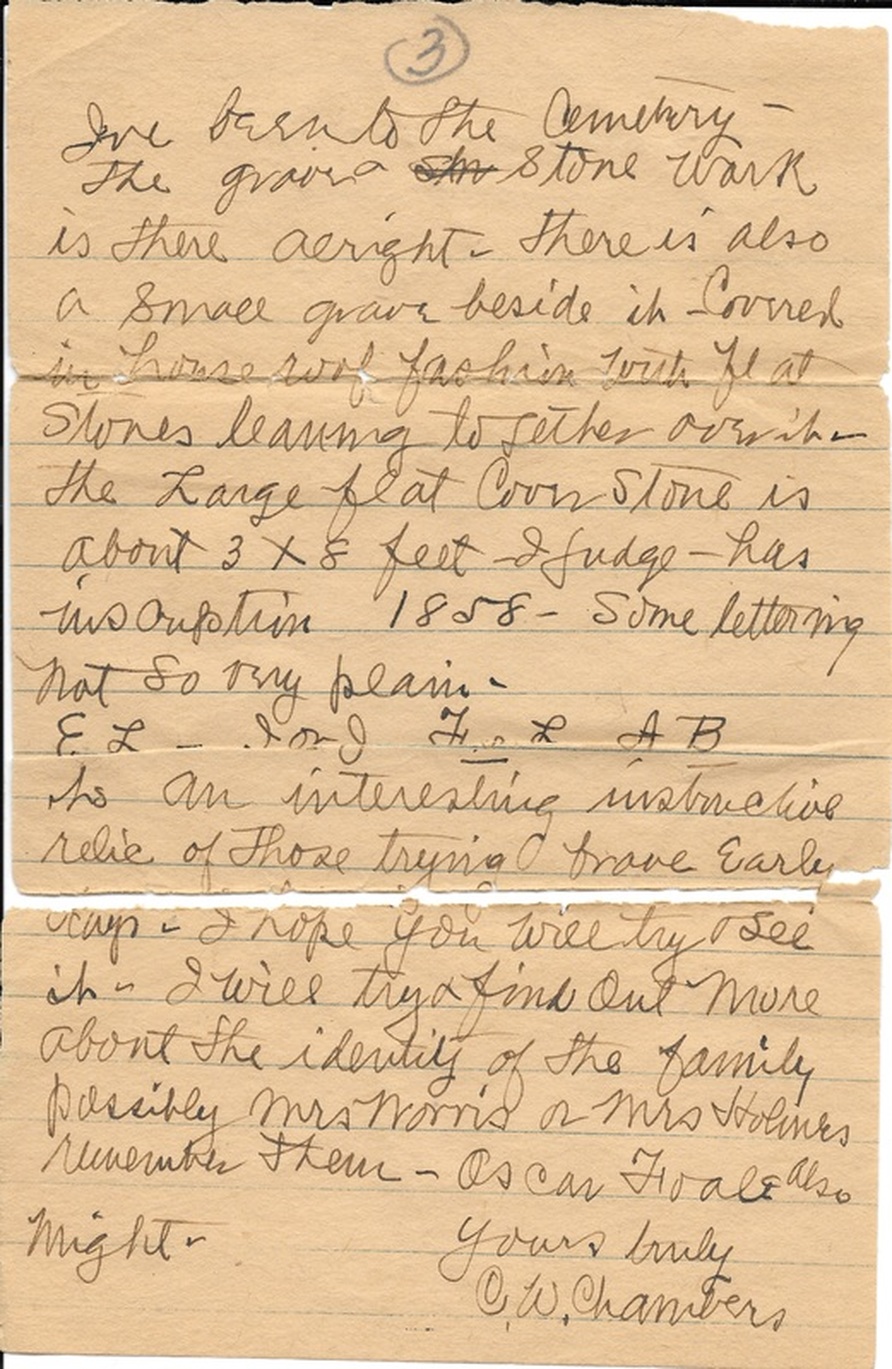 A second letter from Chambers to Judge Raper, dated in June 1931: 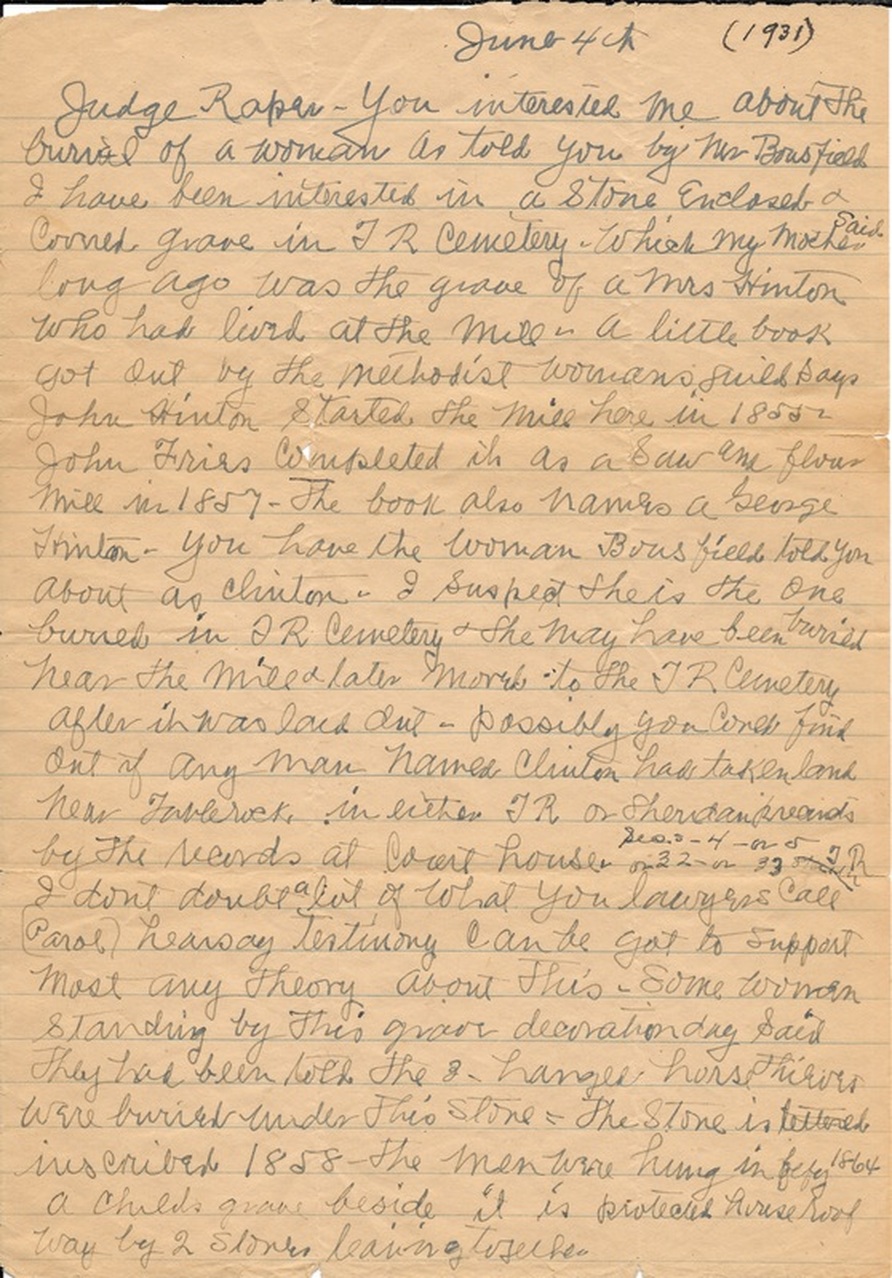 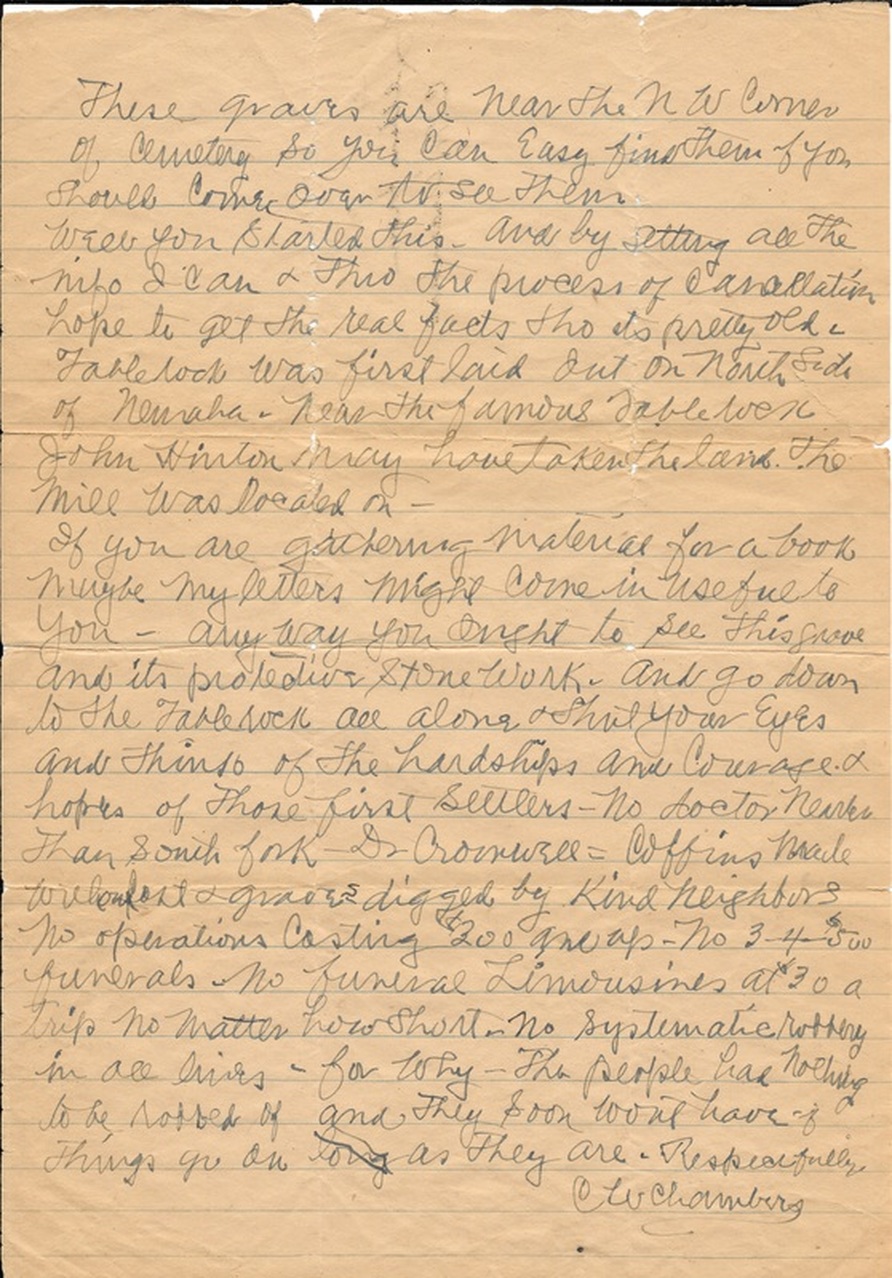 Land records have not yet been checked, as suggested by Mr. Chambers.

1858 was not a healthy year.  C. W. Giddings later reported that people in the bottom lands suffered greatly from illnesses following a Spring of high water.

The death of the miller's wife is noted in a number of historical documents outside the letters above.   For example, one pioneer who was here in 1858 was then-young Fannie Giddings, one of C. W. Giddings' daughters.  In her old age, her children wrote down many her stories about her younger days, including a recollection about the mill accident. 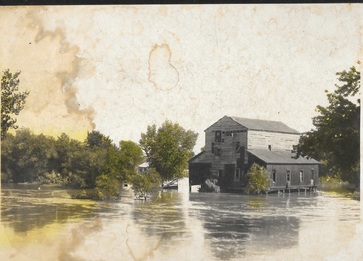 Photo 1447, the old mill engulfed by flood waters. It was abandoned in about 1900.
It is said that the mill was built in 1869.  IF that is true, then the woman recalled by C.W. Chambers' mother would not have been connected to the mill because the tombstone is dated 1858.  But the date could  be off without the identity being wrong.

An article written about the mill stone in the 1930s gives the name as Clayton, yet also sets the time period for the accident as later than 1858.  However, that article was written based on recollections that were as much as 70 years after the fact.  The name could be right but the time period wrong.  Or not.

The article was from the May 4, 1939 Argus. It says that Mrs. Clayton was killed in an accident at the mill. According to that article, the mill was built in 1869 by a man named Flemming who sold it to a man named Cumming who sold it to a man during Clayton.  Mr. Clayton sold the mill to John Blacklaw after his wife was killed.  Her dress got caught in the machinery and before he could get it shut off she had been beaten to death against the burr.  Blacklaw was said by the article to have operated the mill for many years.  Blacklaw was killed in 1882 (not at the mill), so -- if this article, written many decades later, is accurate -- the time period for Mrs. Clayton's accident is probably in the 1870s. 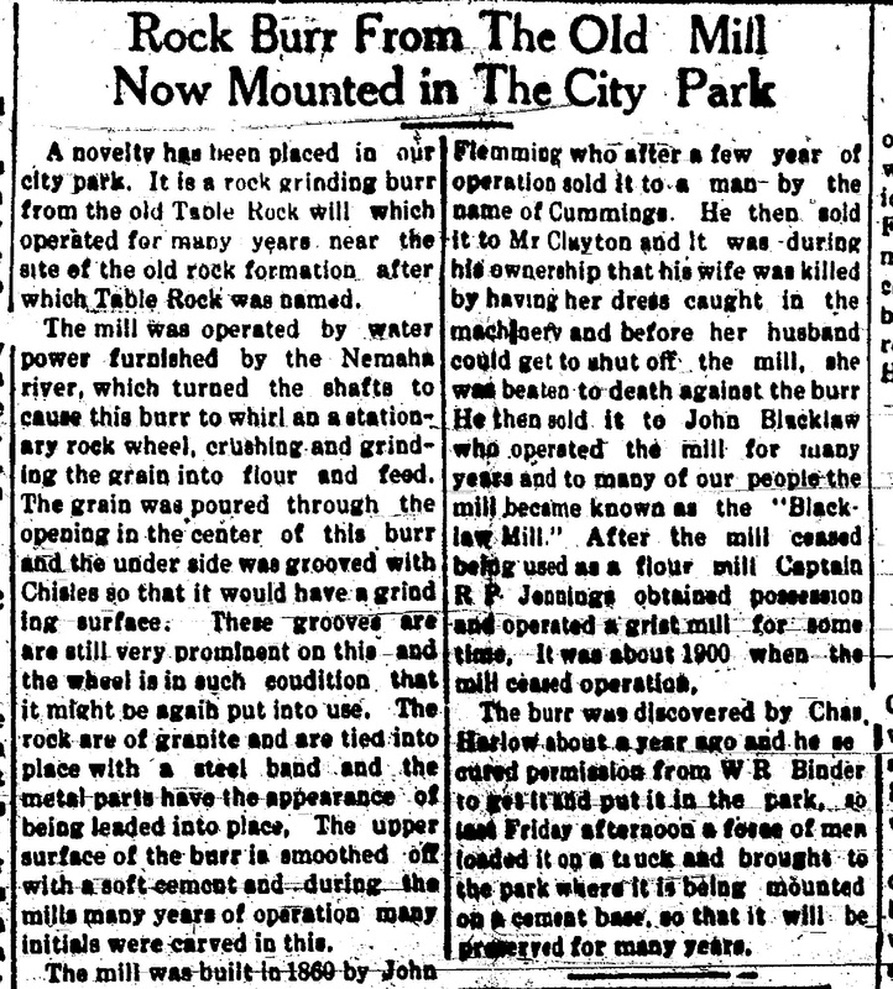 No!  It was mrs. clayton!  an addendum

From the editor: Was the miller's wife who was killed Mrs. Hinton or Mrs. Clinton, as debated by C. W. Chambers?  It was neither.

This webpage about the Mysterious Tombstones was compiled in early 2015.  In November 2015, I discovered a newspaper article in the July 25, 1861 edition of the Nebraska Advertiser (the Brownville newspaper) describing the death of Mrs. Clayton, in 1861.  (It can be found at Newspapers.com.)  Thus are two facts fixed by a primary source unavailable to C. W. Chambers, Judge Raper, or the Argus-- the name and the date.

And with those two facts come the conclusion -- it is not the miller's wife whose remains lay below.

Sadly, as was the newspaper convention of the day, we do not even know her first name.  Mrs. Adam Clayton, wife, mother, and friend.

​Where is she buried?  I do not know.  On November 27, 2015, I searched FindaGrave.com for a person with the last name of Clayton who died in 1861 in the State of Nebraska -- there was no listing. 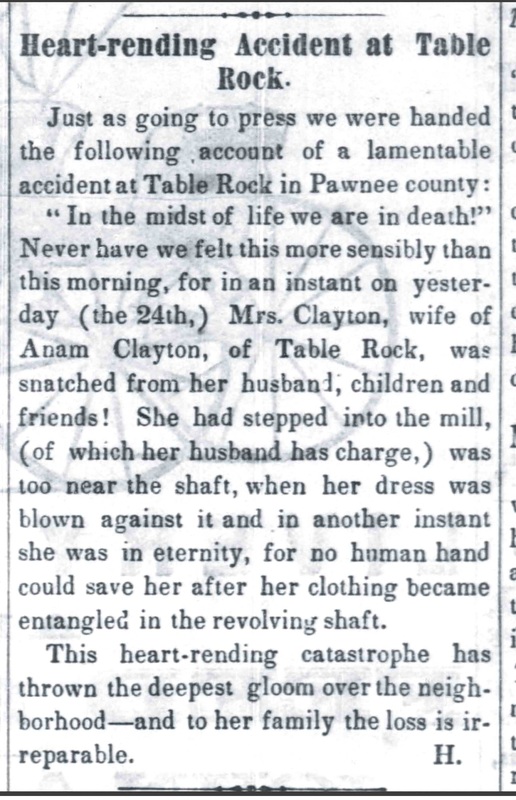 A clue as to the identity of the miller might also be derived from the names of those who had settled here in those early days.