The roof consisted of a layer of tar, sections of which are flapping in the wind, over a pre-existing metal roof.  That prior roof has slowed the damage, which is primarily taking place in leaks at a back gutter at the northwest corner, and at deteriorated flashings around two chimneys. 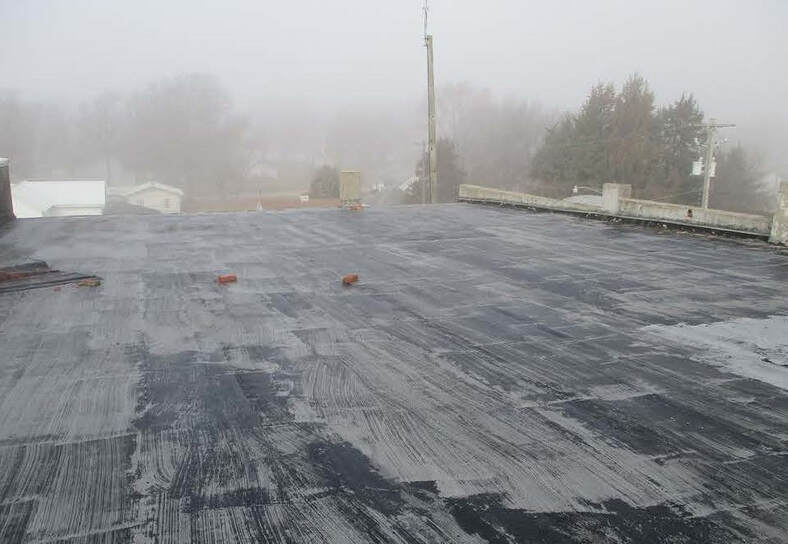 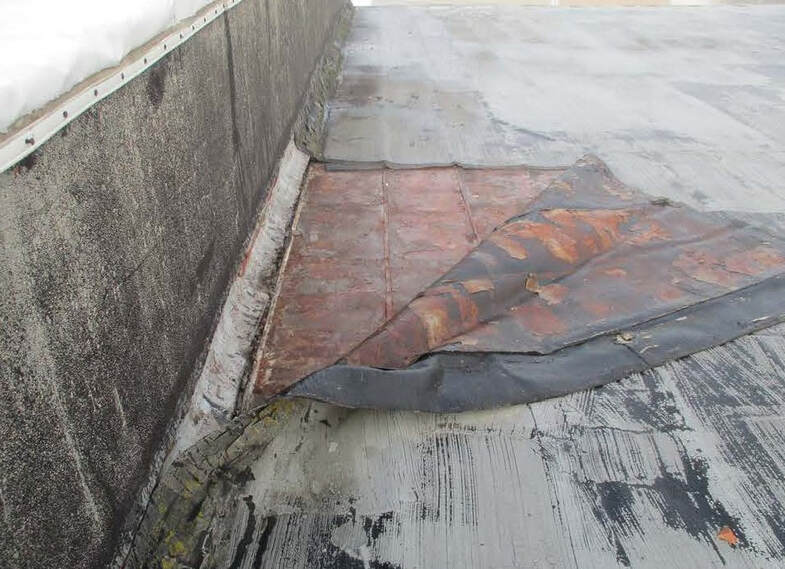 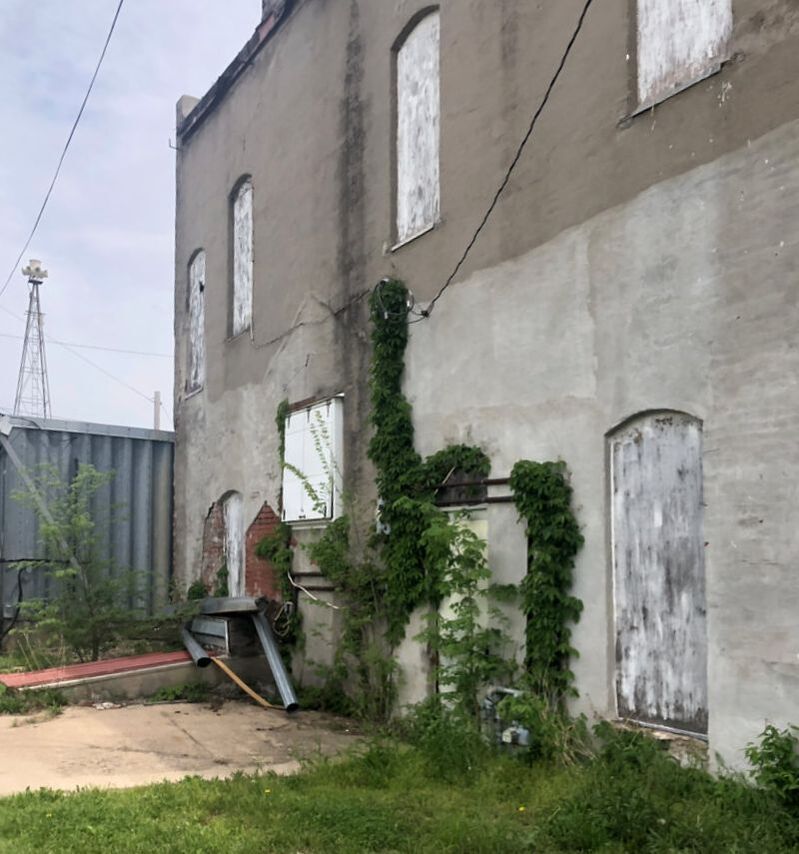 may 11, 2020 -- the northwest (back) corner of the building abruptly reaches a critical point

The back corner was in severe need of tuck pointing and repair.  A few days of storms prepared the corner for its final days. 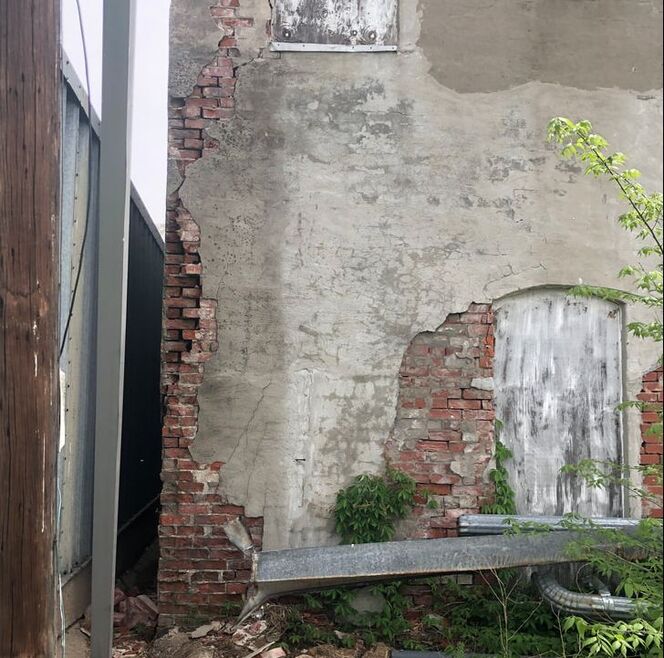 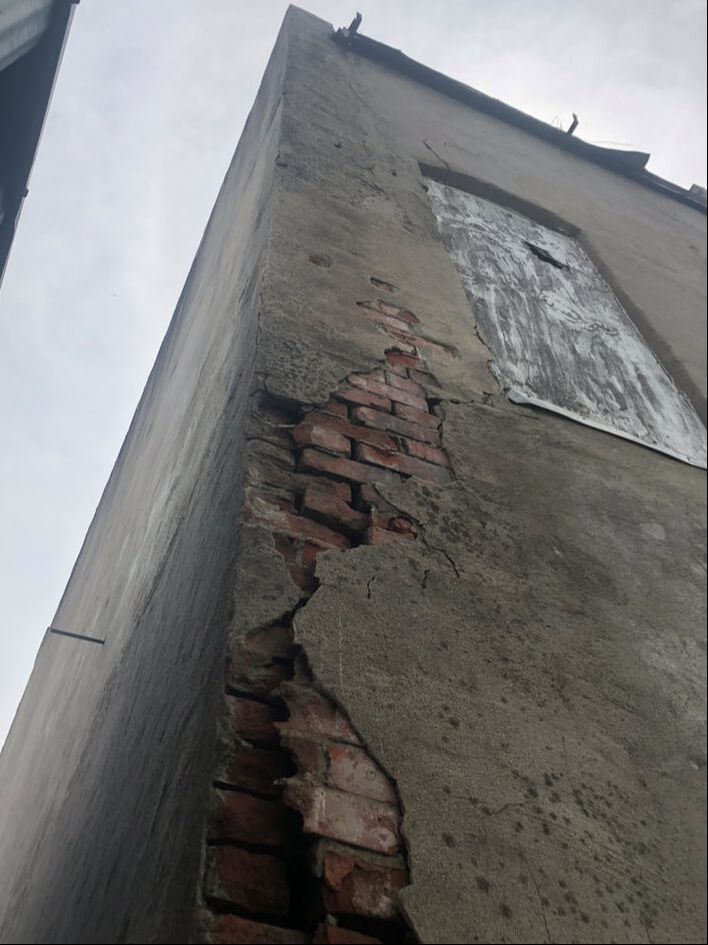 Brick mason Brandon Schawang of Falls City responded to an urgent call to repair the northwest corner after it significantly worsened just as the purchase of the building was about to be finalized.  He will back in July to tuck point the front of the building, and brick mason Doug Hinrichsen will come to do additional work in the back and the interior. 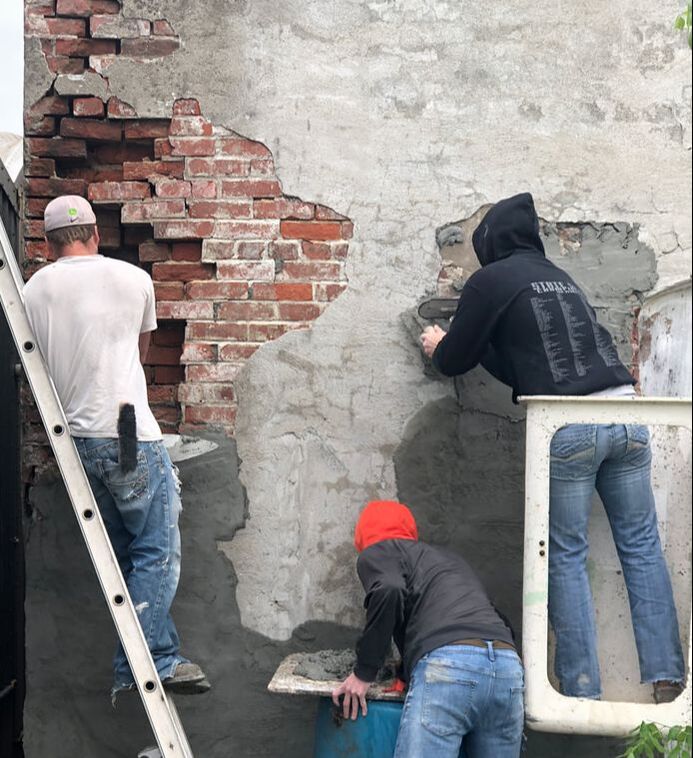 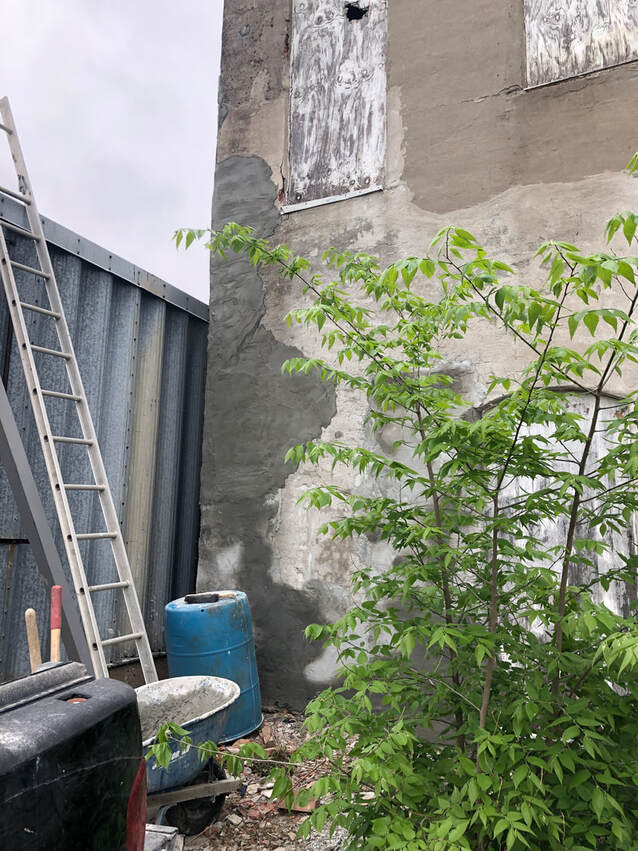 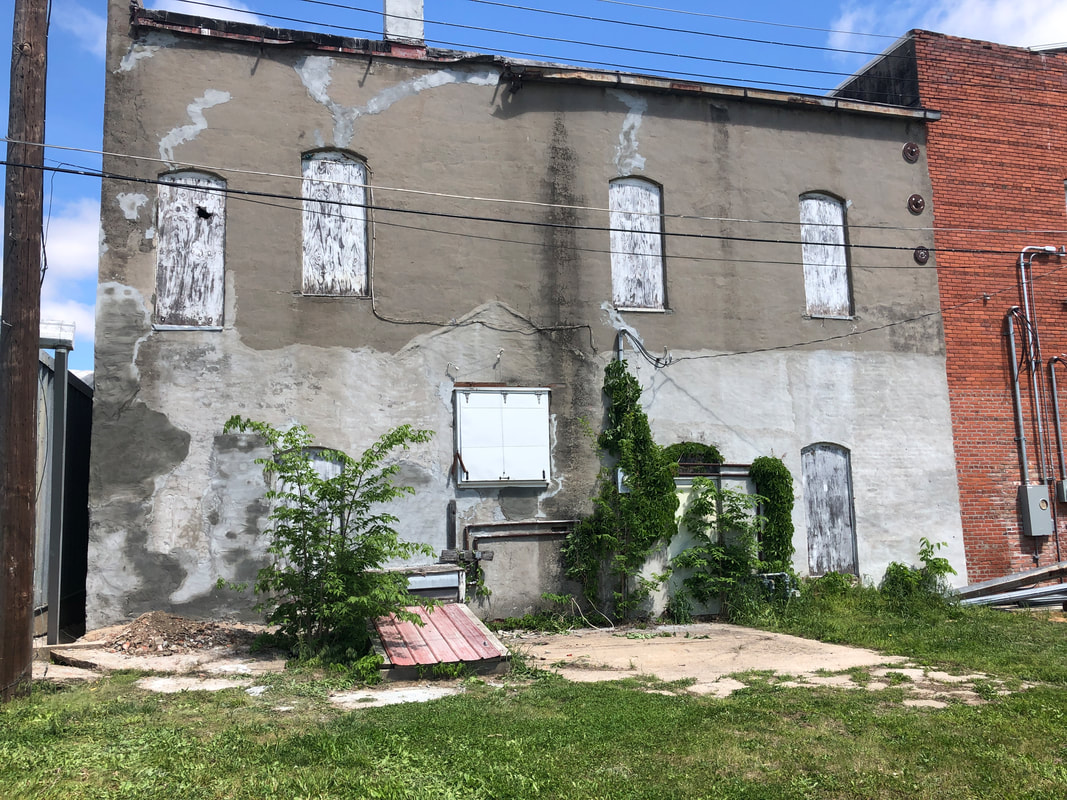 wednesday, may 21, 2020 -- repairing the drainage trough between the old fire hall and the old legion hall.

About midway down the trough, a newer portion with a curve gave way to a flat one, which tilted toward the Legion building, effectively pooling water during rains, which would then pour into the basement of of the Legion building.  The solution was to pour a new trough to replace the flat, defective part.  Danny Burkholder of Pawnee City brought his crew to do that on May 20.  Pete B inder of Table Rock's Binder Brothers Lumberyard brought the concrete, a very dry mix that could be well shaped.

The space between the buildings was too narrow for a wheelbarrow, leaving the workers to relay it back in five-gallon buckets, starting at the midway point and working toward the front of the building. 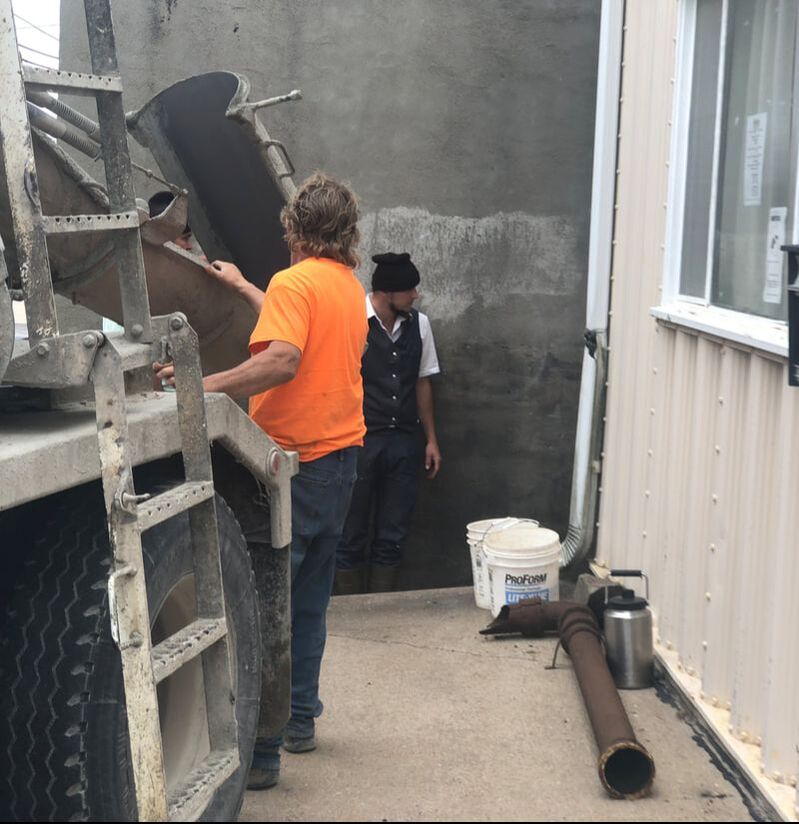 ​Before & after -- It is a little difficult to make out how flat the trough was (see left) but the concave portion was carried forward from the existing concave portion, and, using a laser, the trough descends steadily to the drain at the street end.

Between the metal basement door and the building was a box.  The front of it had ventilation.  It was likely that when the basement was used as a social club, the door could be closed but air could still be vented through that small enclosure.  Reportedly Ed Flider built it years ago, and it must have worked well.  However, now, many years later, it had rotted, and considerable rain was getting into the building through that structure.  Danny Burkholder & crew tore it off, and put a simple transition structure in place.  They also trimmed some of the saplings that had grown up. 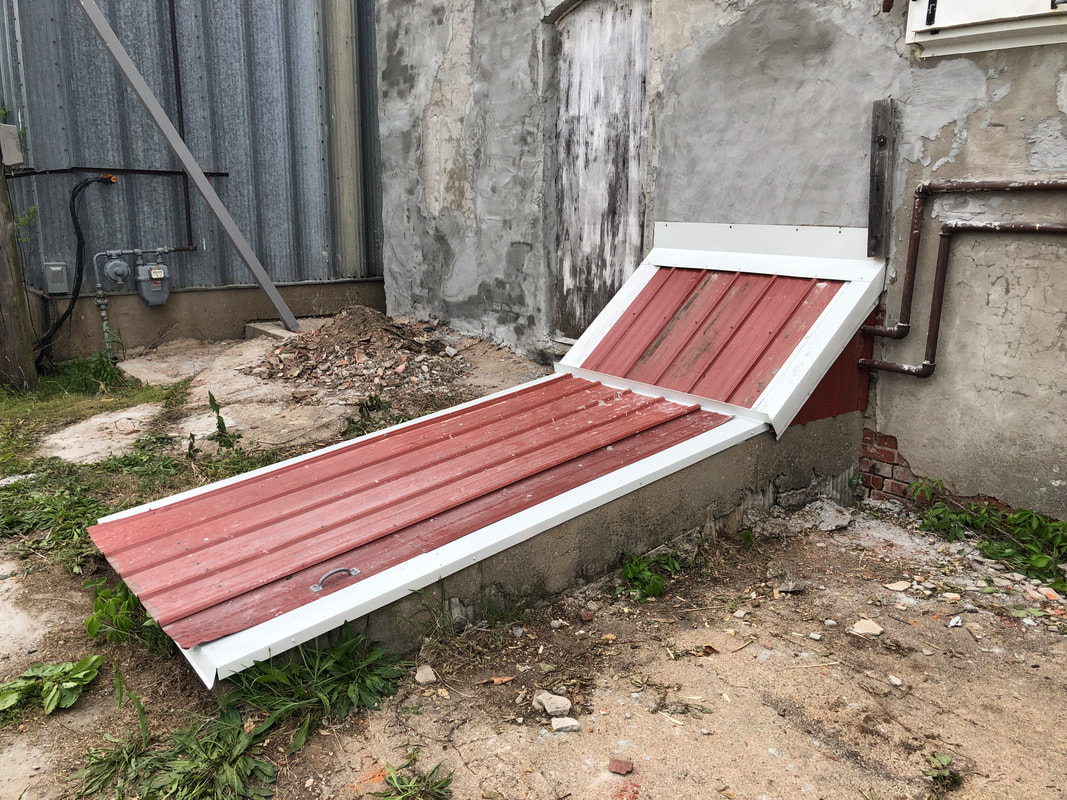 When the new trough was laid, there was an old cast-iron sewer pipe in the way.  It was affixed to the Legion building, but appears to have been an old sewer vent coming from the old city hall.  It no longer went anywhere or served any function.  It was removed.  The next day, the brick where the lower bracket had been affixed fell out.  The front needs tuck pointing badly, and it is scheduled to take place in five or six weeks.

The successful bidder, Centimark, sent their men to do final measurements and assessments in order to prepare for a crew from St. Louis to start work on May 27.

With a sapling now out of the way, the reason the back door won't open could be assessed.  it's the bricks. Just as at the corner, they are shifting.  Pictures were sent to brick mason Doug Hinrichsen, who will be working in that area and inside were sent, and he says he will come after he finishes his current project. 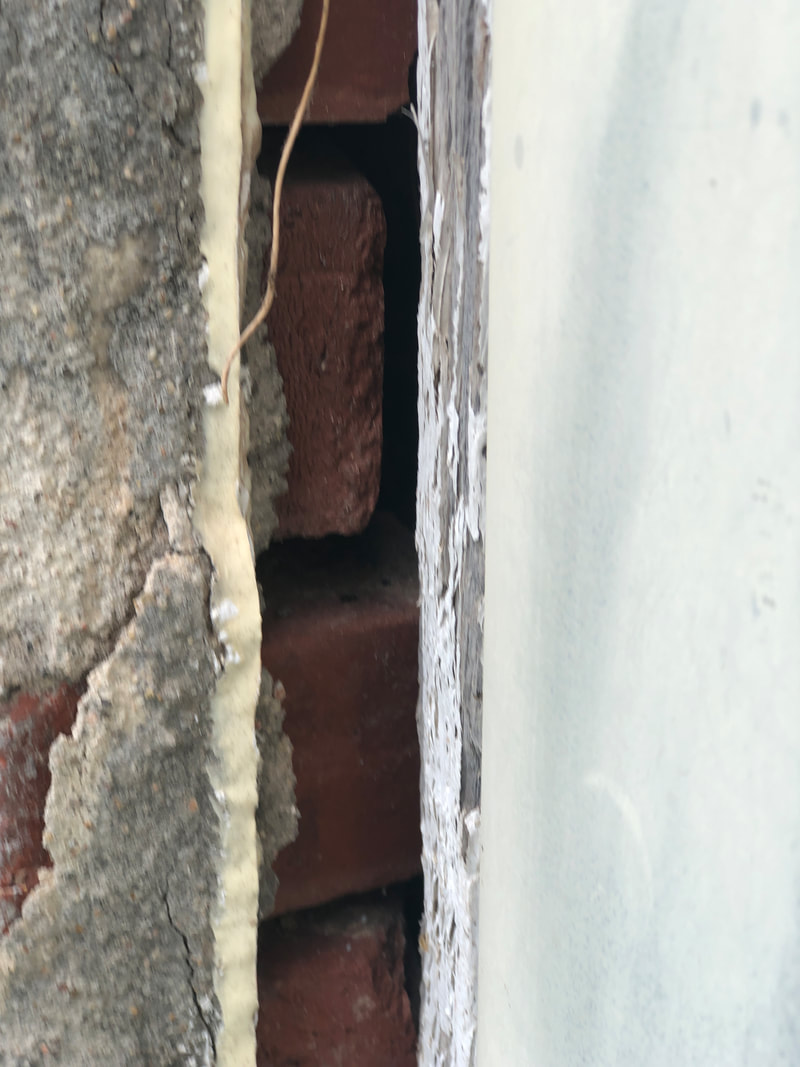