This photograph led to the discovery of the Ryan family of Table Rock.  The man labeled as number 1 was identified in a copy of the picture owned by Charlie McCourtney simply as "Ryan." 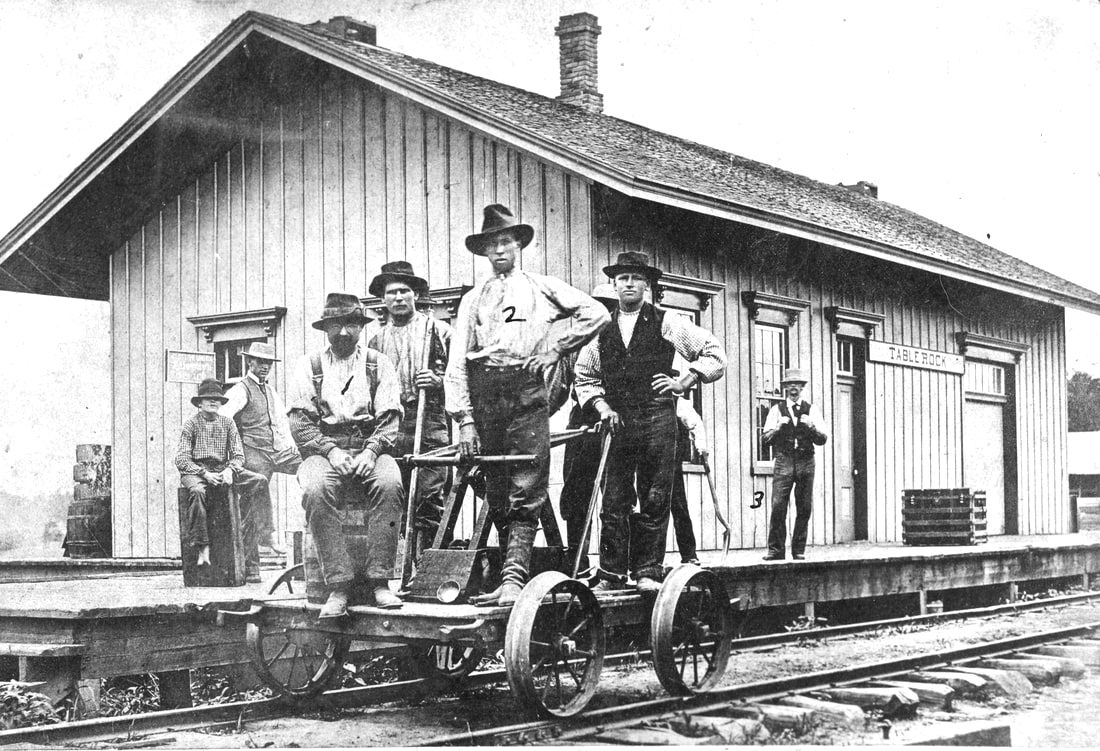 Ryan.  First name, or last name?  Checking the census records on Ancestry, Ryan came up in Table Rock only in the 1885 Nebraska state census. Edward Ryan, head of a large household with wife Ellen and children James, Mary, Patrick, and William. Edward Ryan was 43 at that time and his occupation was a section foreman for the railroad and his wife worked at a hotel.

Is Edward Ryan the Ryan of the picture?  We can't say with certainty.  However,
A family tree of Larry Loob's included Edward Ryan.  Larry is a descendant of a sister of the Edward Ryan's.  I contacted him and hje quickly responded.

larry loob about the ryan family

In October 2019, Larry responded with information and a picture of Edward Ryan's sister.  He had placed Edward in Wymore based on an obituary. (Read more about the Table Rock - Wymore connection below.)  He also; identified a SON named Edward, born in 1865; Edward the son was not in the Table Rock census records.  Larry's email:

Hello and thank you very much.

I have not yet found a living relative of Edward Ryan although there most like are some as he had a sizeable family.

​Edward was born on 29 Sept 1841 in Feighduff, County Tipperary, Ireland to Patrick William Ryan and Johanna Irene Garvin. Their [other] children were:  William 1833, (immigrated to Eau Claire, WI worked on the Railroad), Mary 1836, Thomas Joseph 1842, Ellen Ryan 1843, Bridget 1846 and Patrick William, (nick name Shamrock), who died 1899 as a railroad worker in Wisconsin, as a result of train accident.

Edward Ryan Immigrated to the US in 1860 and lived in Eau Claire, WI. for a very short time.

He and his family moved to Union Prairie, Allamakee, Iowa and started farming.

We on our end don't know much about Edward and his family other than that he came back to Eau Claire, WI. For his sister's funeral. The picture of the couple in the wedding picture is of my great grand mother Ellen Ryan 1843 (Edward' sister) and her husband Thomas F. Looby (1874 picture).

If you run across any living family or data, Please you or have them contact me. I am on Anestry.com or lloobywi@Outlook.com

Keep your history detective hat on, because Larry's email creates an additional wrinkle.  Is the  "Ryan" of the picture 40ish, or is he 20ish?  Because Edward Ryan would have been 20ish.

About Edward Ryan being listed as being in Wymore by the 1880s -- The railroad families of Table Rock and Wymore were connected by the important railroad line that ran between them.  It was not unusual for a family to move from one end of the line to to the other.  It was a short trip by rail and apparently not very expensive, as there are reports of social visits paid by rail.  The Edward Ryan of Wymore could well have been an Edward Ryan of Table Rock for a few years, or more, or less, and the change of residence not noted by obituary or census.

In the end, the jury is out as to who "Ryan" is.  Our guess is Edward Ryan the father, a section foreman.  What do YOU think.

By the way, here is the picture of the sister of Edward Ryan the father:   This picture was taken in 1874 and is the wedding picture of Larry's great grandmother, Ellen Ryan Lobby and her new husband Thomas Looby: 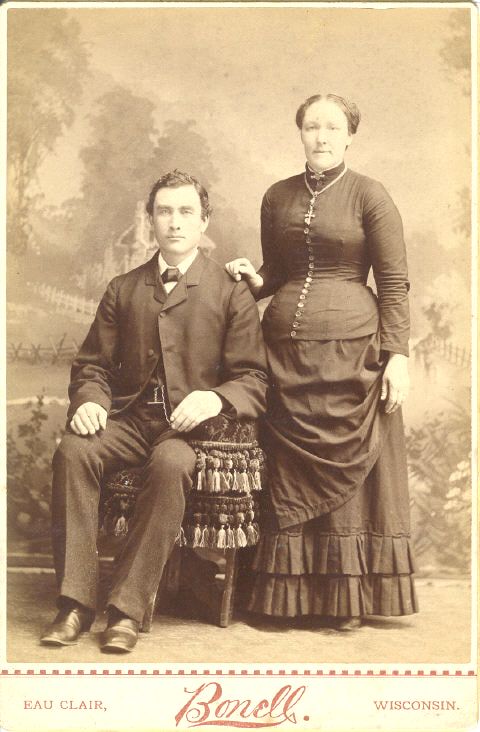