c. l. wemple
in charge of preparation for the building of the line for the republican valley railroad (later called the wymore line) that would connect table rock to denver & points west.

​So many people connected with the railroad are buried here.  One walks by their stones in the cemetery and knows nothing about them but their names and dates.  They had interesting lives worth knowing about. C. L. Wemple is one of them.
Wemple spent important years of his life in Table Rock. It was home to him, even after he moved away. He died while living in Montana, but his earthly remains were returned to the town that had become his.
C. L. Wemple's obituary in the May 4, 1923 Table Rock Argus

After their marriage Mr. and Mrs. Wemple moved to Michigan, where they resided until 1876, when they came to Table Rock, making this their home. The past few years they have spent a part of the time with their two sons at Dillon, Mont.

Mr. Wemple early identified himself actively with the interests of his home town. He served this city in the capacity of marshal, constable, councilman and mayor. He was generous to a fault, never being able to see people in need without trying to relieve them. As an officer of the town he often met such and never failed to aid them even buying supplies and paying for them out of his own pocket.

He was a contractor and builder by trade. He was the architect and builder of the Methodist church and also supervised the rebuilding of the present building. It was just before the completion of this building that he suffered his first stroke of paralysis.

He was a member of this church, having united with it on September 3, 1876. He was a member of the Masonic lodge and an earnest believer in its principles and teachings. He joined Masonry in 1866 and was a charter member of Table Rock lodge No. 108, with which lodge he was affiliated at the time of his death.

He was a firm believer in the justice and mercy of God. A faithful member of the church; a loyal and active citizen of his town, a loving and indulgent husband and father. At the end of a long, eventful and useful life he came to his death, it can be said of him, "as a full, ripe, shocked corn in his season."

The remains were brought from Dillon to Table Rock for burial, being accompanied by the widow and eldest son, Earl. They arrived here Thursday afternoon and funeral services were held in the Methodist church at 10 o'clock in the forenoon and were conducted by the pastor, Rev. G. P. Trites, assisted by Rev. J. V. Bandy, of Humboldt. The Masonic Lodge took charge of the services at the grave and all that was mortal of Crowell Wemple was laid to rest in the grave.

To the mourning widow and children of the deceased the sympathy of the community goes out in unstinted measure. There are many outside the family circle who feel a deep personal loss in the death of Mr. Wemple, for in the days gone by a strong tie of friendship had formed between them and his ready sympathy and kindly aid will be greatly missed.

Buster Carter was a brakeman on the Wymore line and is still remembered by retired railroad man Pete Hedgepath, who started his railroad job beginning in the mid-1950s.  We don't have any pictures of Buster as an adult, but here he is as a kid playing with Mike McCourtney on a rail inspector's car.  Buster is at the helm. 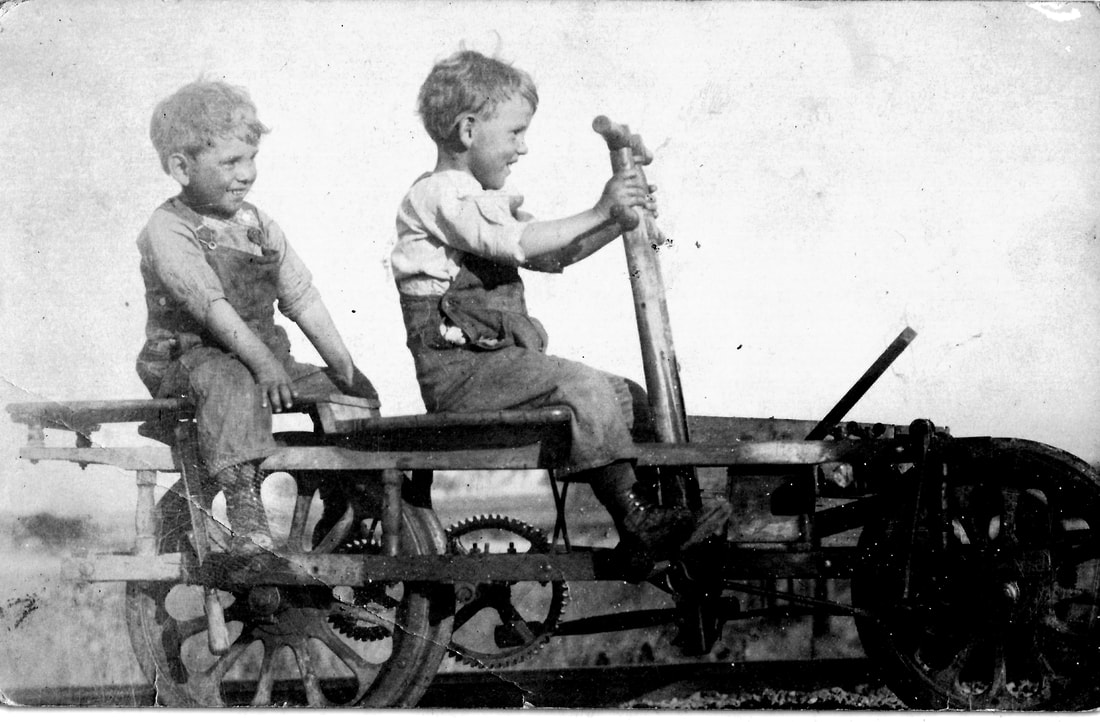 He had two children.  His daughter Annie married Edward Lyman, and their son was Link Lyman, an early inductee into the professional football hall of fame.  His son Howard Cleaveland made his home in Table Rock and became a railroad brakeman, but after nearly killed in a job accident went on to become a college coach. 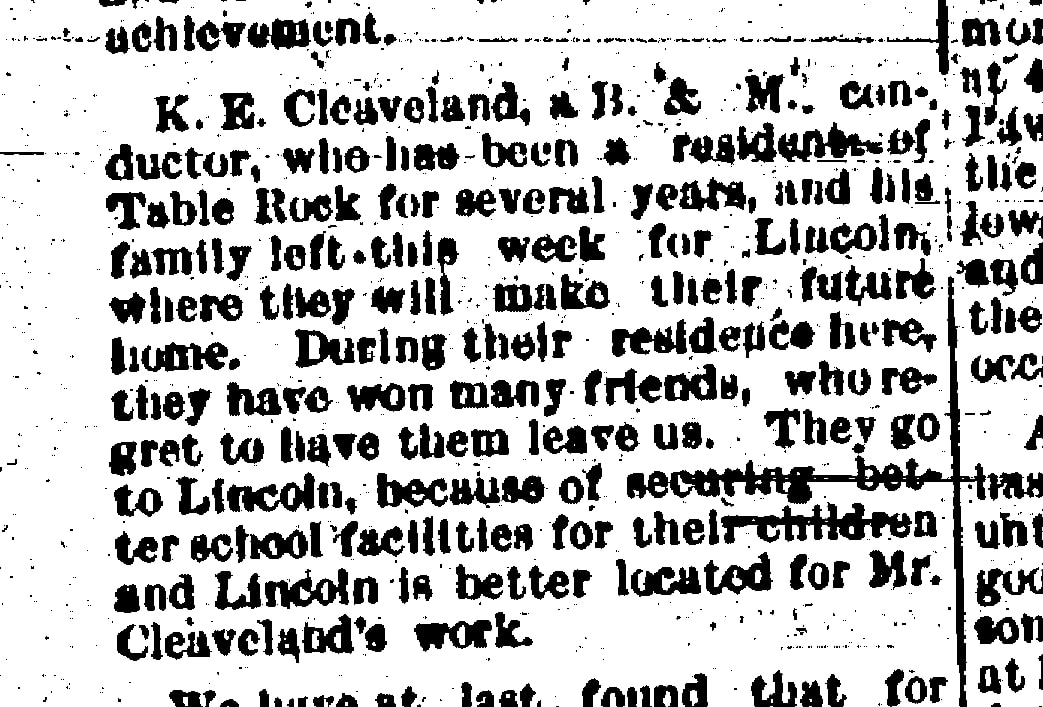 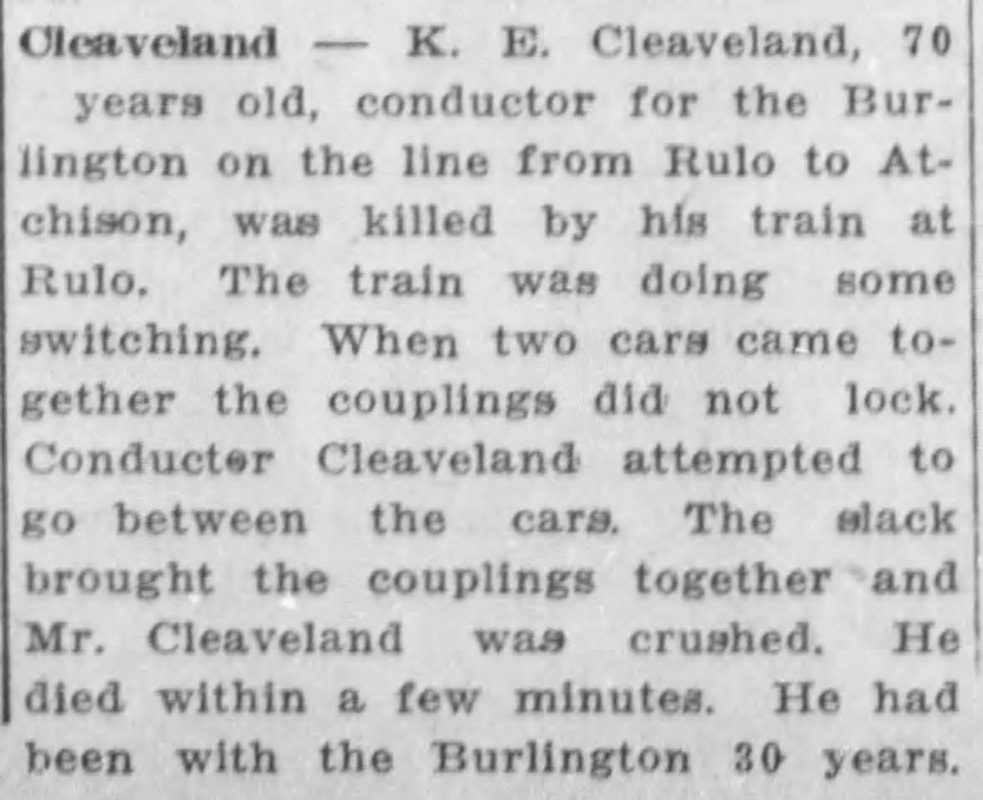 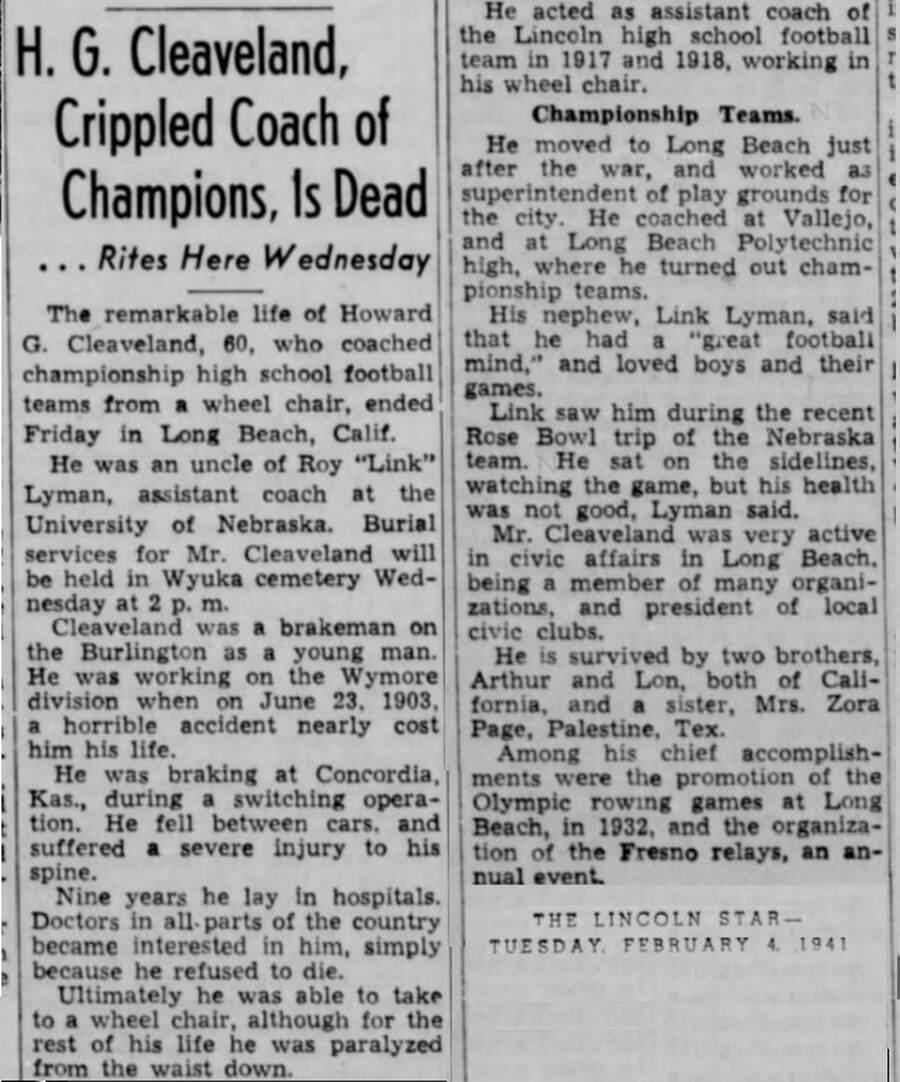 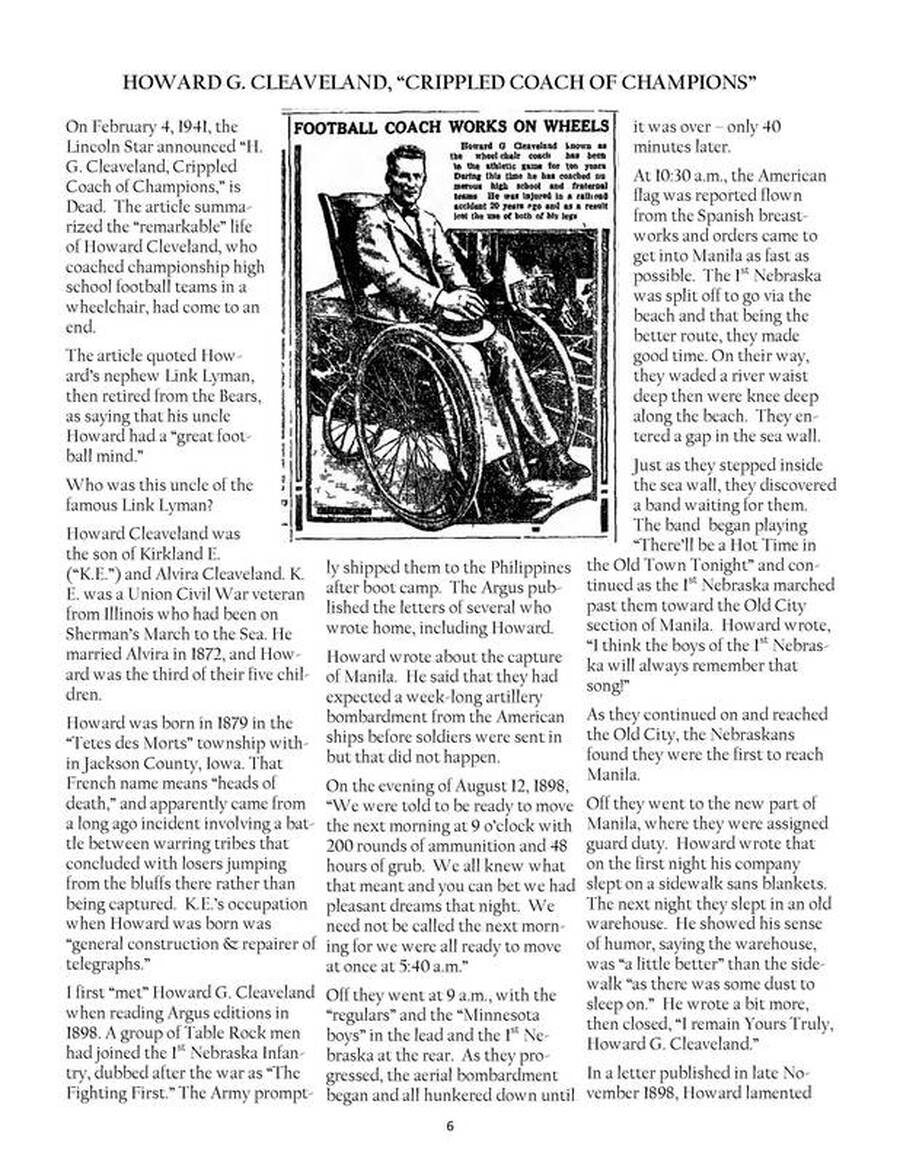 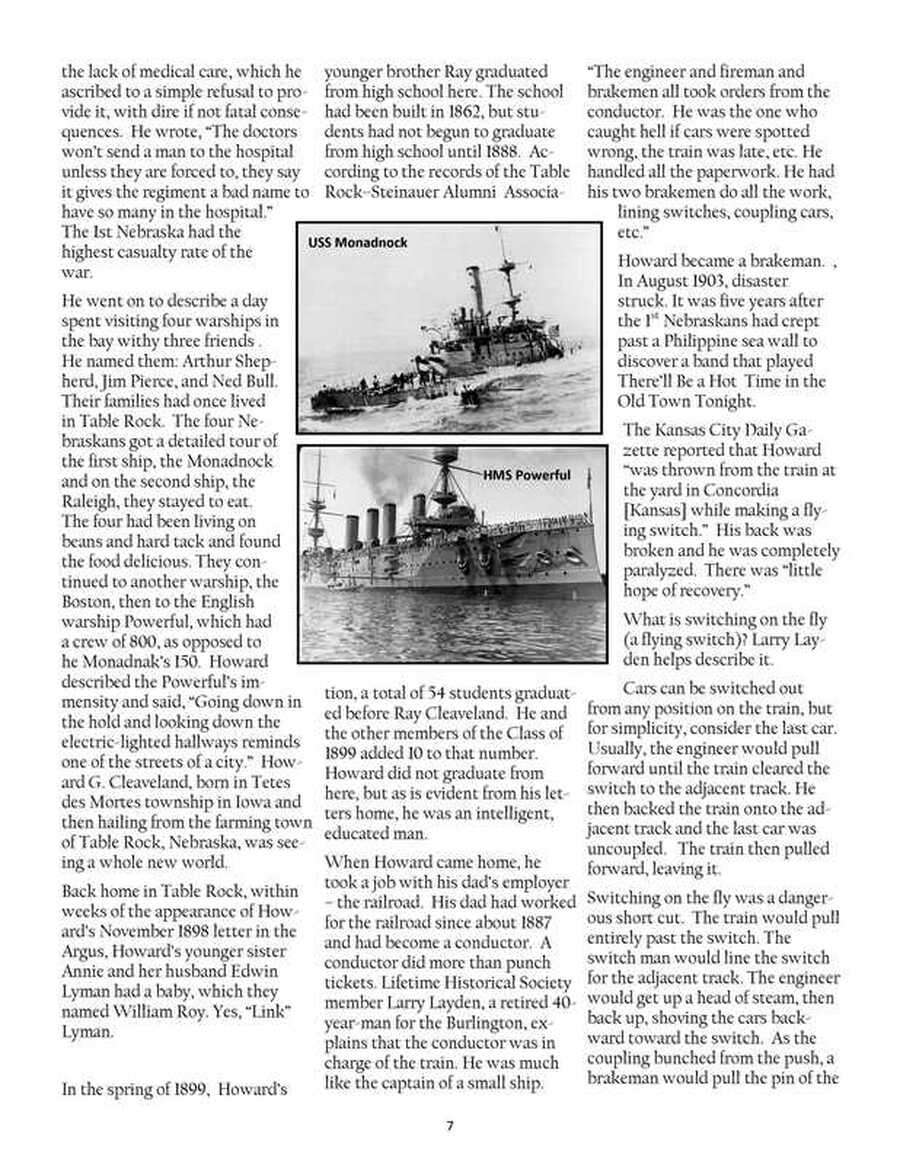 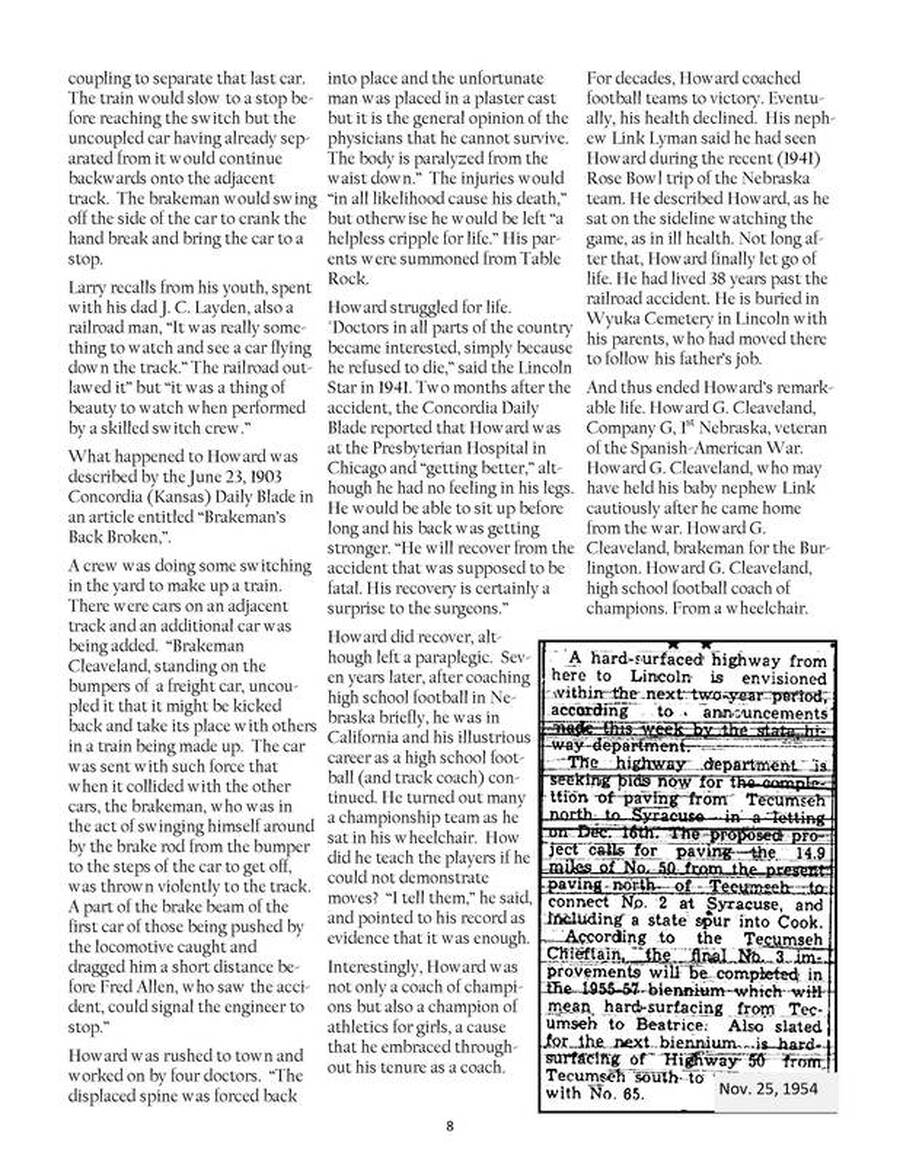 ​b. fred muscheites
a signalman 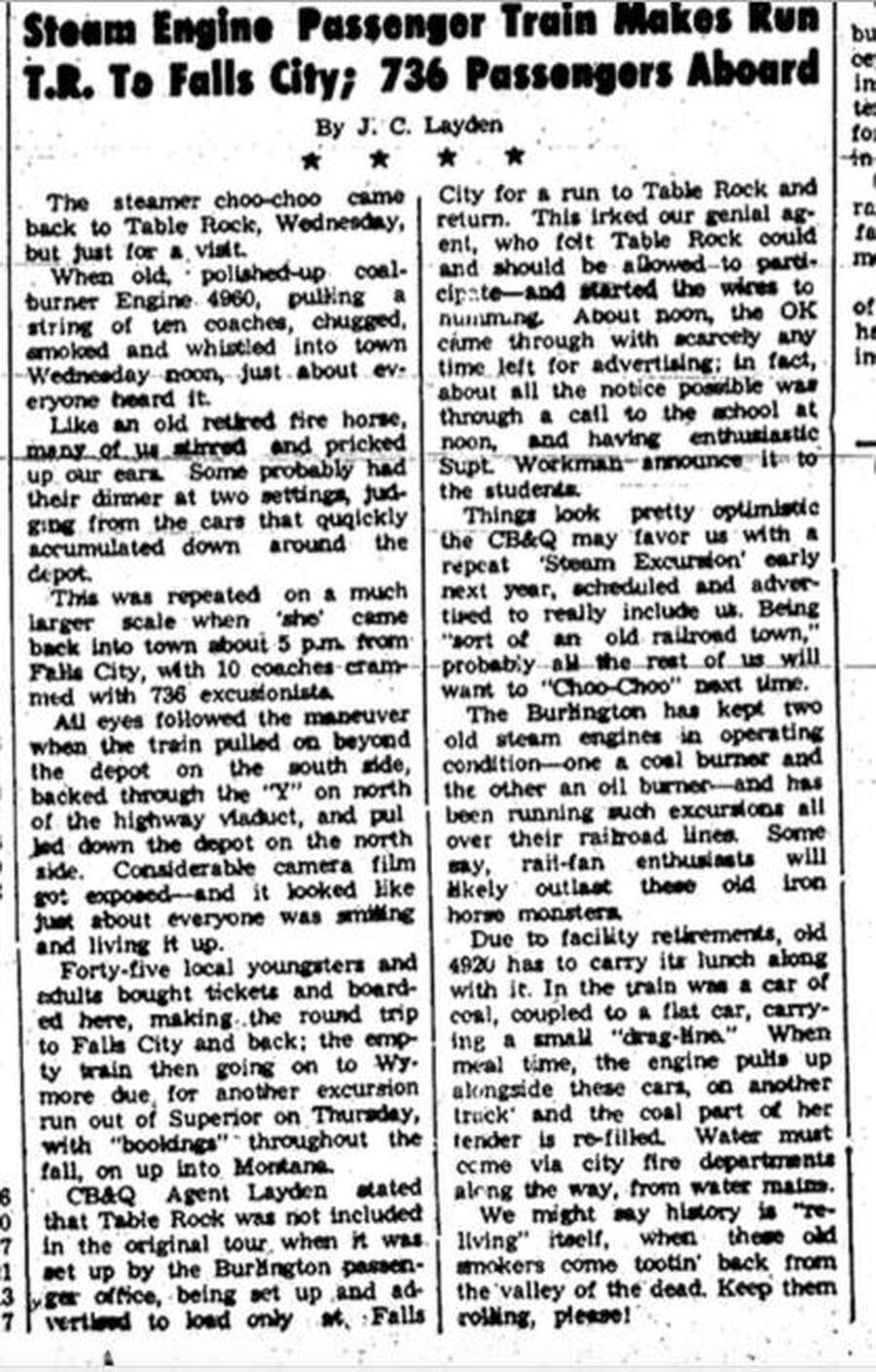 October 1962 -- after the last official passenger came through, the railroad brought a steam locomotive through for an excursion. J. C. wrote about it (He was a great historian and wrote many things about the railroad here and in other places where he worked.)

William Emery Billings, one of the children of first-wave pioneer Hiram Billings,  was a section foreman for the Burlington.  His obituary:

William E. Billings, 78, died suddenly early this morning at the Pawnee County Hospital, following a heart attack. He had returned from the hospital on Monday and was improving when another attack early this morning resulted in his death.

Funeral services will be held at the Kovanda-Beethe Funeral Chapel in Table Rock on Saturday afternoon at 2:30 p.m. Burial will be made in the Table Rock Cemetery.

Mr. Billings lived in this community for many years and was a retired section foreman of the Burlington railroad.

William Emery Billings was born January 21, 1873, three miles north of Table Rock. He was the son of the late Hiram and Rosetta Billings.

He was employed by the C.B.& Q. Railroad for 48 continuous years. He retired in 1938 and has lived in Table Rock since his retirement. Mrs. Billings preceded him in death.

He married Mrs. Florence Miller, the former Florence Hansmire of Fairbury, on December 12, 1925, who survives her husband.

Mr. Billings served as mayor of Table Rock and served several years on the town council.

Funeral services were held at 2:30 Monday afternoon at the Kovanda-Beethe Funeral Home, with Rev. Ward Merritt in charge. Burial was made in the Table Rock Cemetery.

In this same circa 1876 photo, colorized by Steve Bixenman, C. W. Chambers is the man at the far right. His obituary says he was the first depot agent for the Pawnee City depot, but Pawnee City had two rail lines and two depots, and it doesn't say which.  It would have been around 1881, when work began on the Wymore line that went through Pawne City. 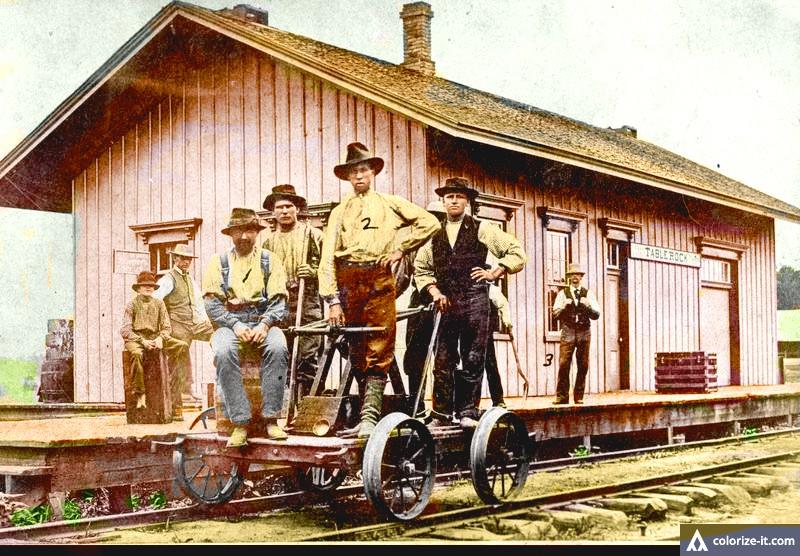 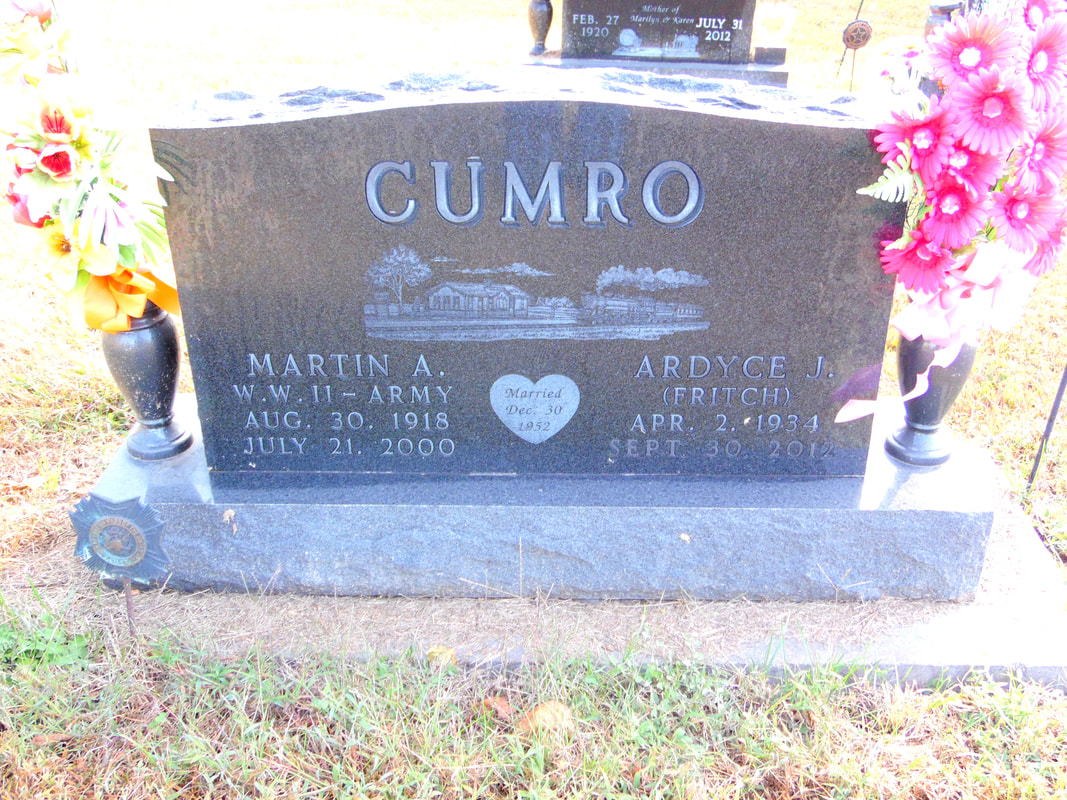 charlie mccourtney
among many other things, he built and moved railroad lines

This circa 1876 photo identifies man #1 as "Ryan," presumably Edward Ryan, as the Nebraska census of 1885 for Table Rock precinct shows him as a section foreman, and there were no other Ryans on the census or yet known. 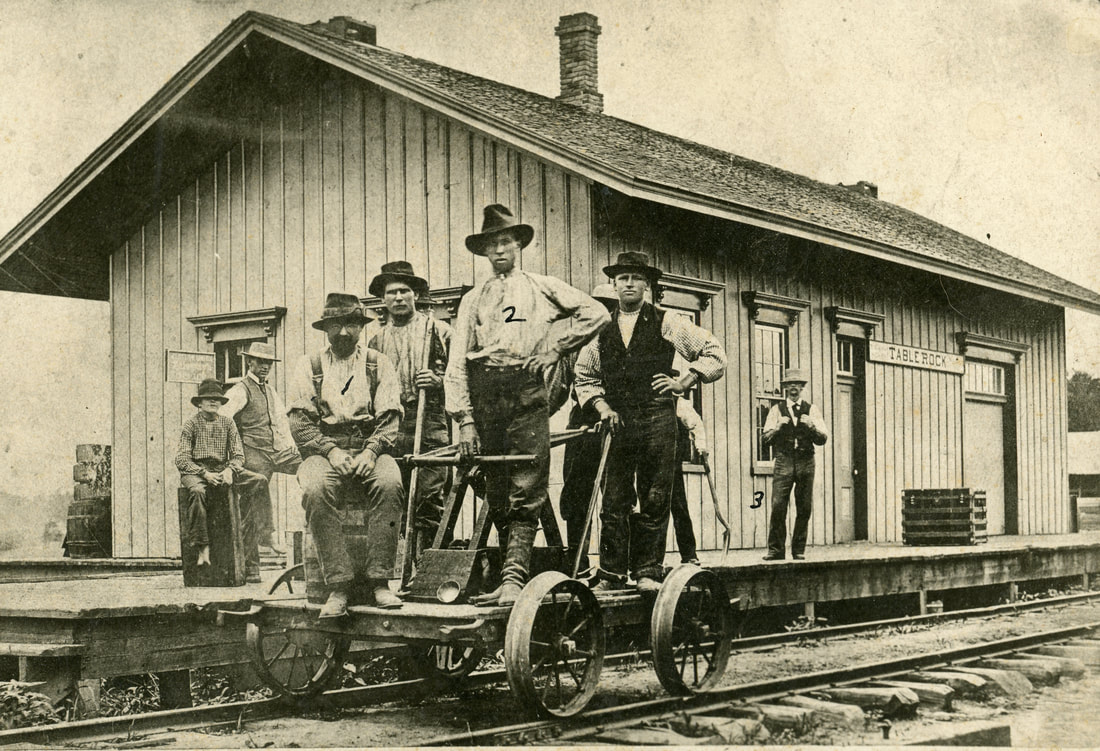 w. g. shepherd
proprietor of railroad hotels by the depot

There are many more: