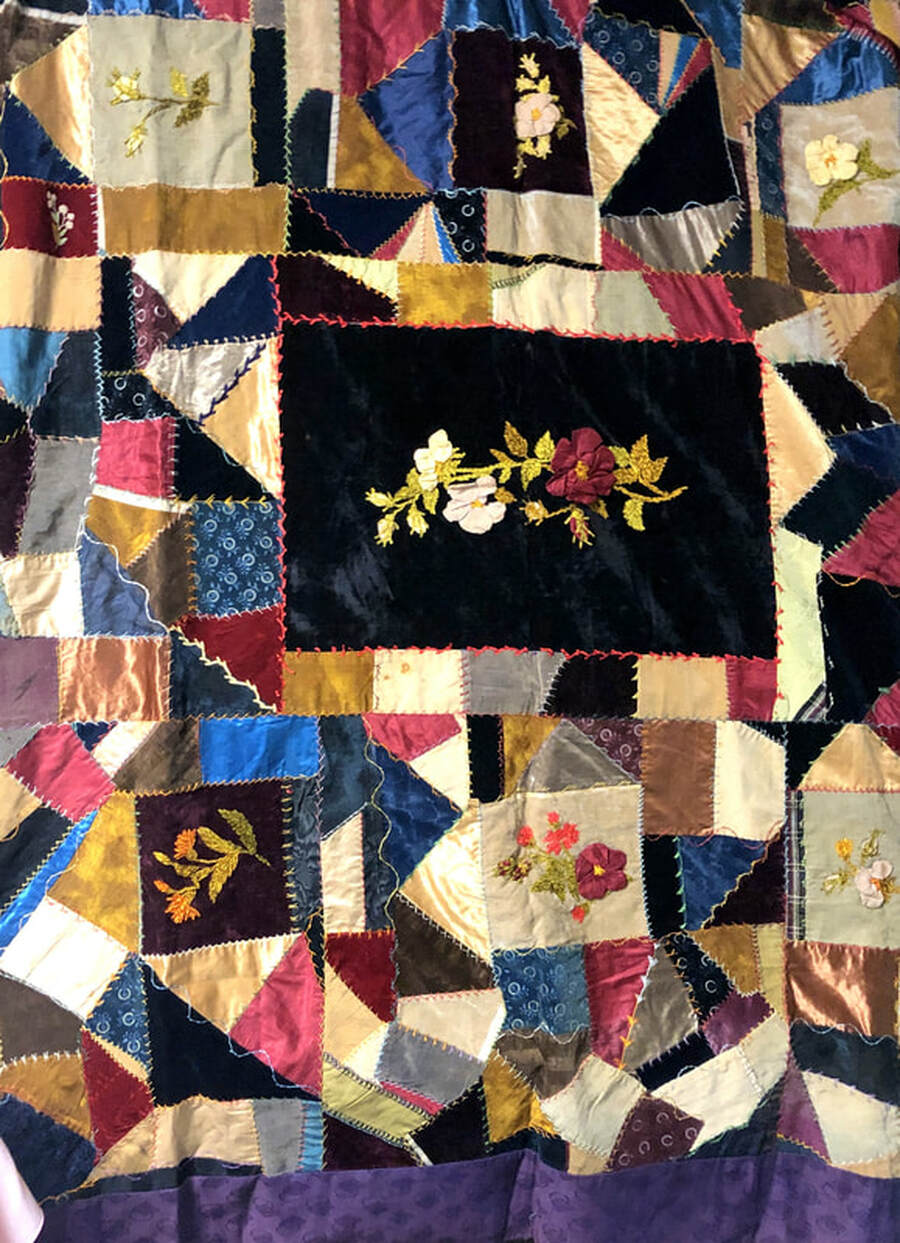 This stunning quilt, with two matching pillows, was donated by Susan Hadley.  Her grandmother  Anna Baucke Bartels (4th from left, below) made it.  Anna is buried in St. Peter’s Lutheran  Church Cemetery.  This picture was posted on Findagrave by “Farmer” and is labeled as Henry Baucke, John Baucke, Lena Trute, Anna Bartels, & Louise Beethe, and being from the collection of Mary Baucke Ulrich. 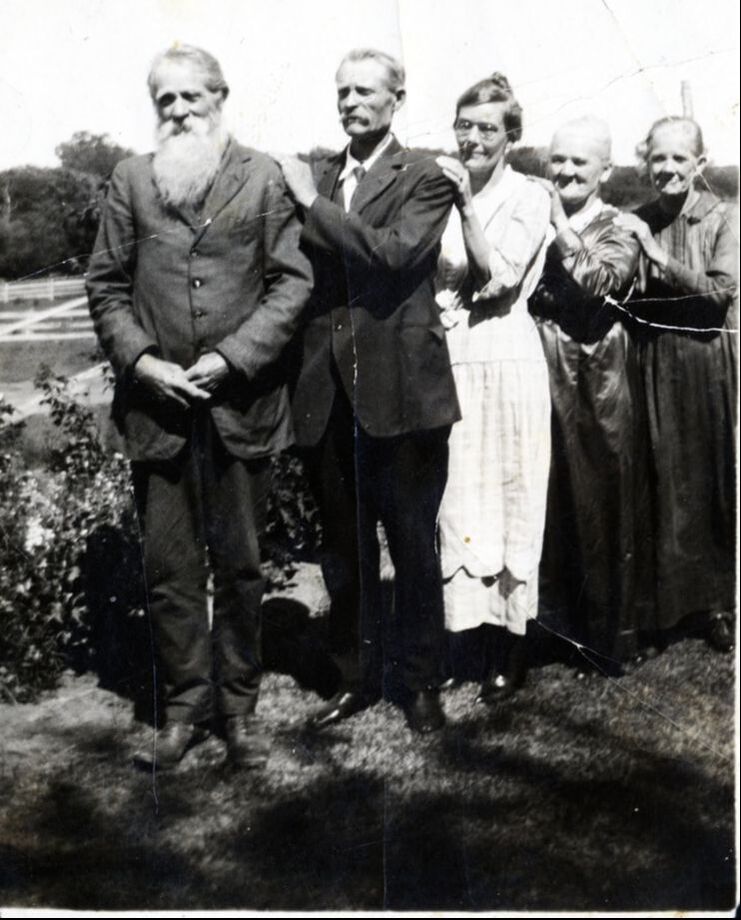 Photo 7728
Susan gave us a copy of an assessment she was able to get at the International Quilt Study Center in Lincoln, Nebraska: 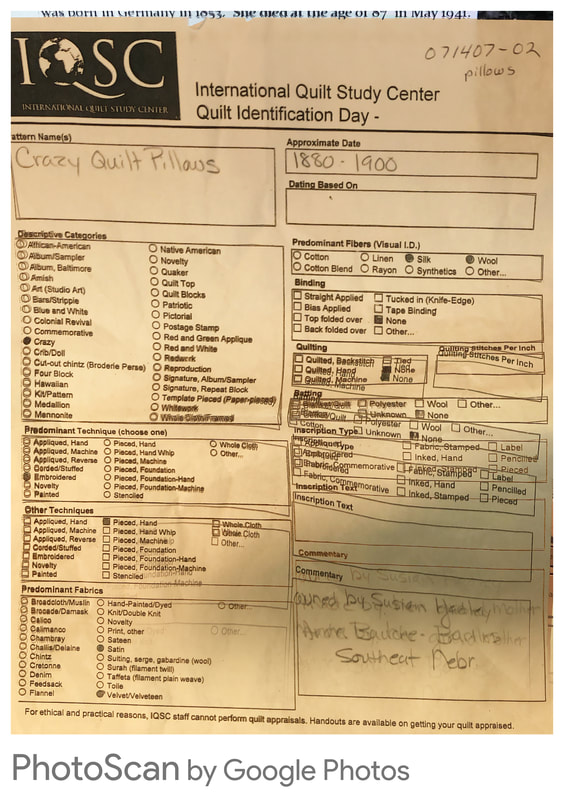 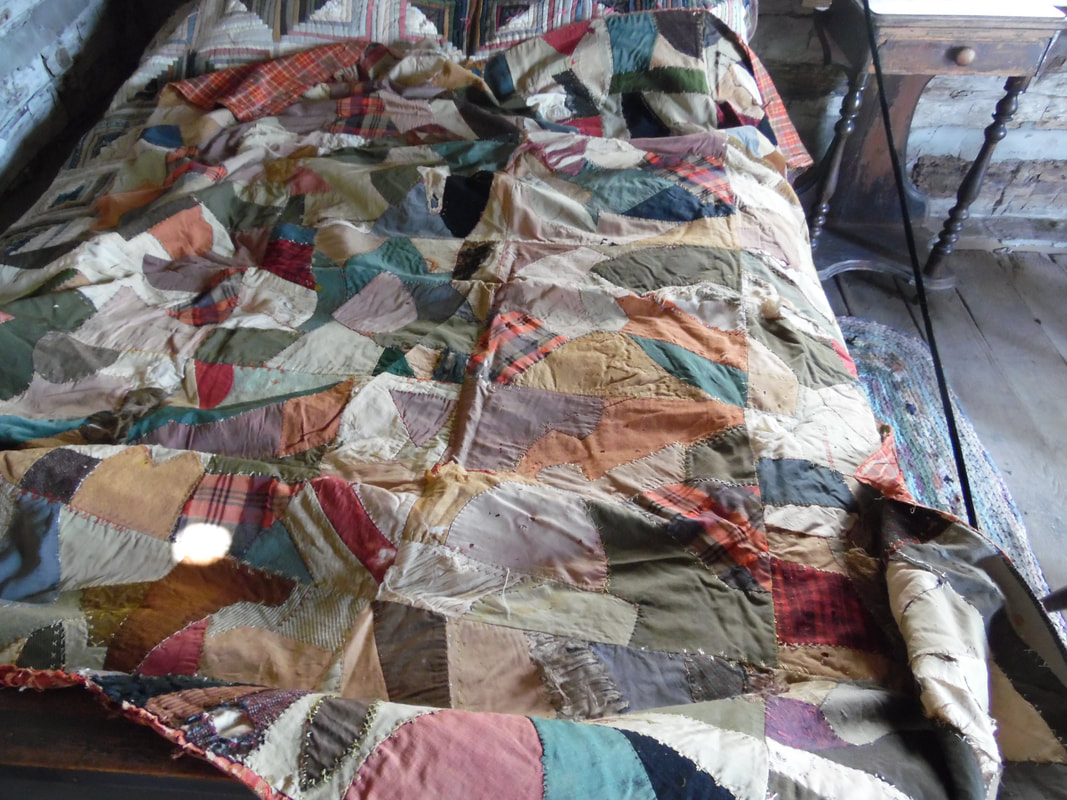 Here is a slide show with some details of of the quilt.  The fabric was plain dress goods, but the stitching was neat and serviceable.
And wouldn't you like to know a little more about the woman who made this quilt, Theresa Irik Korber?

Theresa's mother may be Mary Antonia Kabat Irsik https://www.findagrave.com/memorial/121021065/mary-antonia-irsik. However, their marriage date is after her birth date, and Mary's younger than her spouse, so Stephen might have had a previous marriage so that Theresa belongos to an earlier wife.  So I've requested more information from Jerome, and shared your request with him.

Thank you to Debbie, and we're looking forward to more information!
​

Nettie Stehlik donated this quilt years ago.  She is long gone now, and her children, Loren Joe and Merilee, do not know where she got the quilt.  They do not think it was a family item.  Whatever its source, it is a wonderful piece of craftsmanship.  It lay on a bed in  the Opera House bedroom for perhaps 50 years, next to an open window.  Although there were lace curtains on the window, it is likely that the quilt has faded greatly over time and may have had far more color than now. 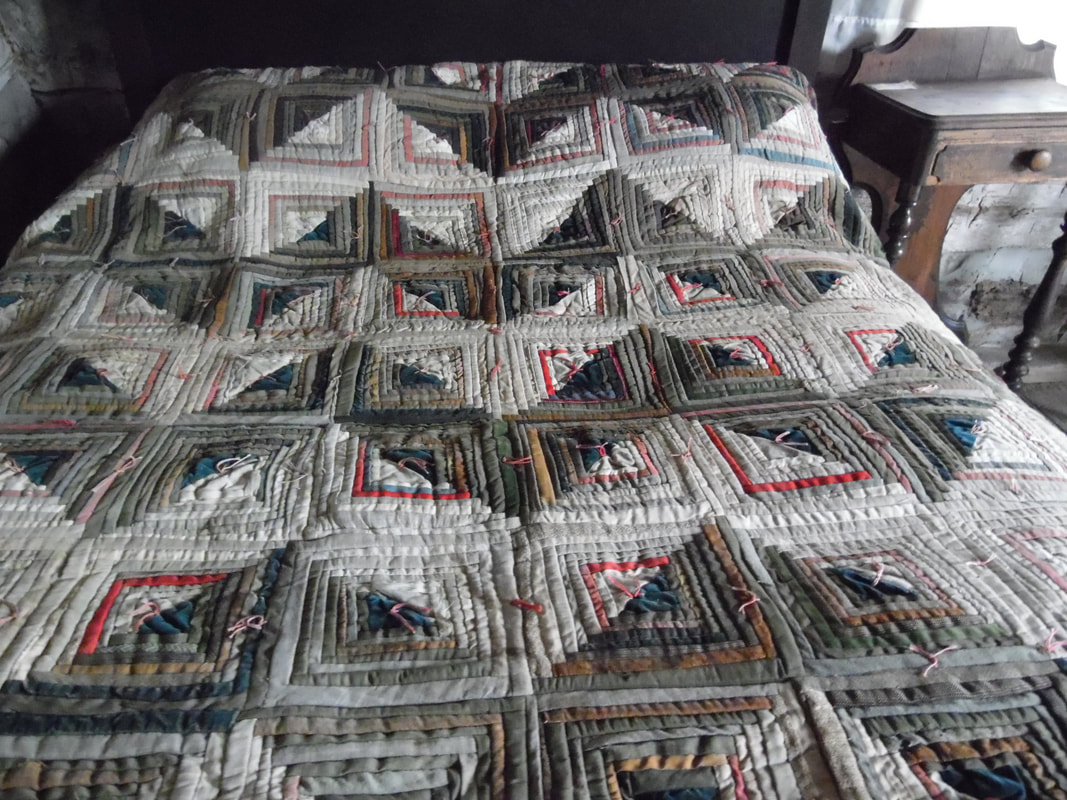 Here is the vintage backing:
Here's a slide show with some details:

*under construction, photographs to be added*

Neighborhood quilts were popular “back then” but this one is unique.  Whoever taught the 4th and 5th grades that year put together a quilt with her students names. Those of the students who would graduate from Table Rock would do so in 1936 and 1937. Some – like the four Binder cousins – would fight in World War II, a war they could hardly have contemplated when they were about 10.

our "digital" collection
we don't OWN these quilts, but pictures have been shared with us by our many friends

Dorothy Strohm displayed this lovely little quilt at the 2017 Tomek reunion in the basement of the Methodist Church. 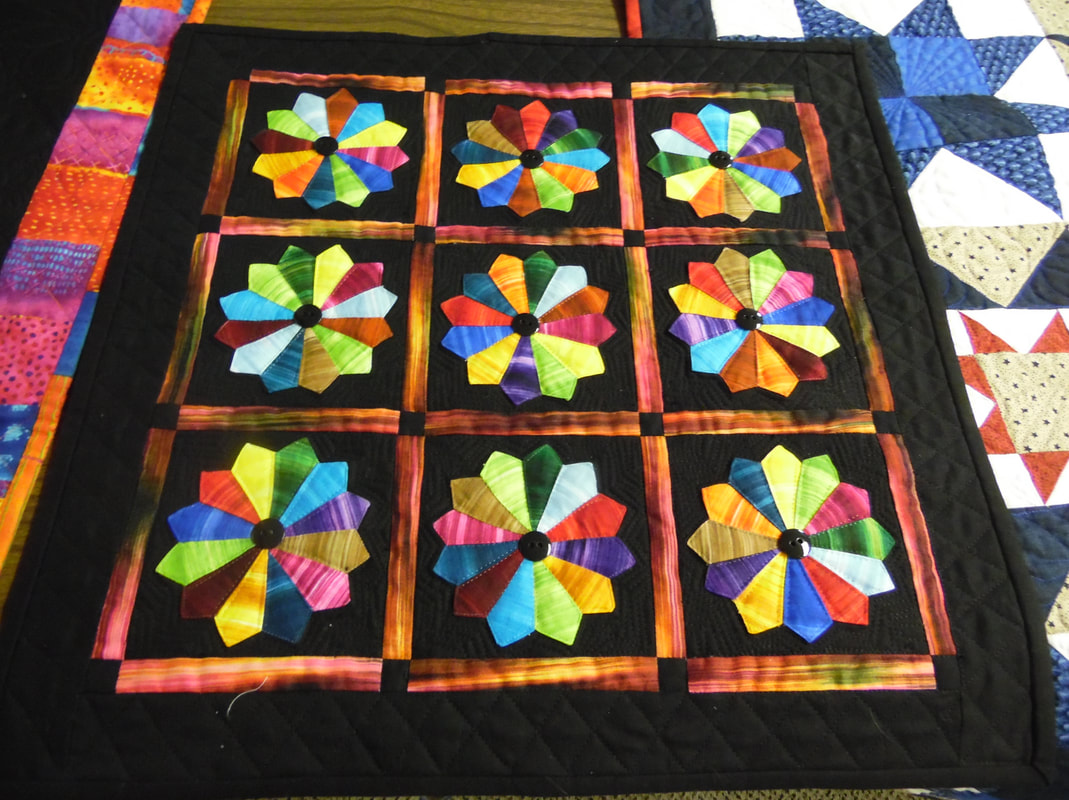 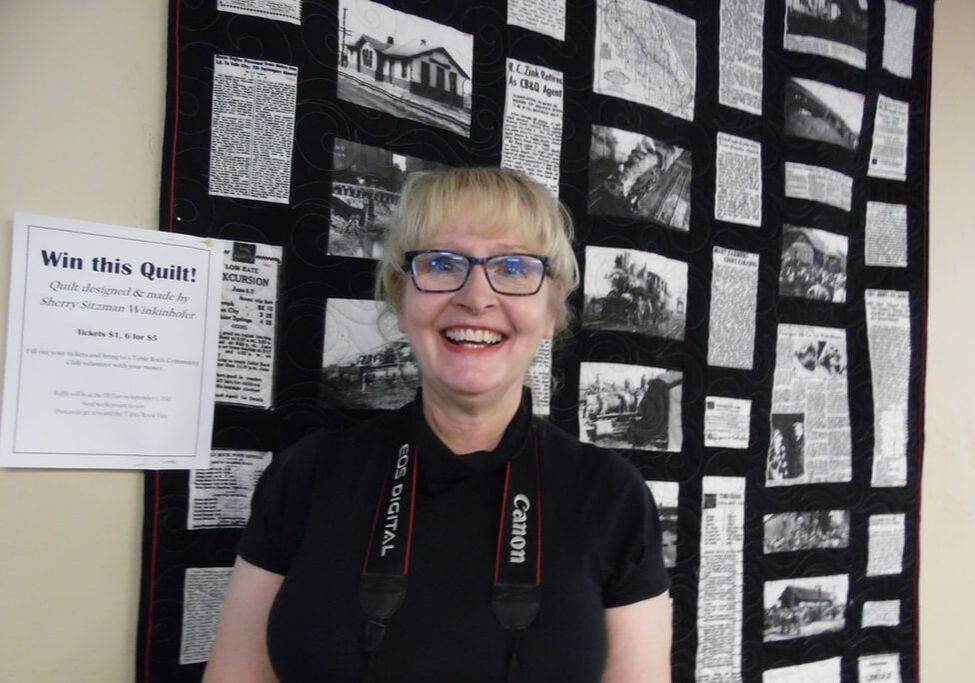 Eldonna Woltemath before the raffle for the Table Rock train quilt. Roger Vondrasek won it. 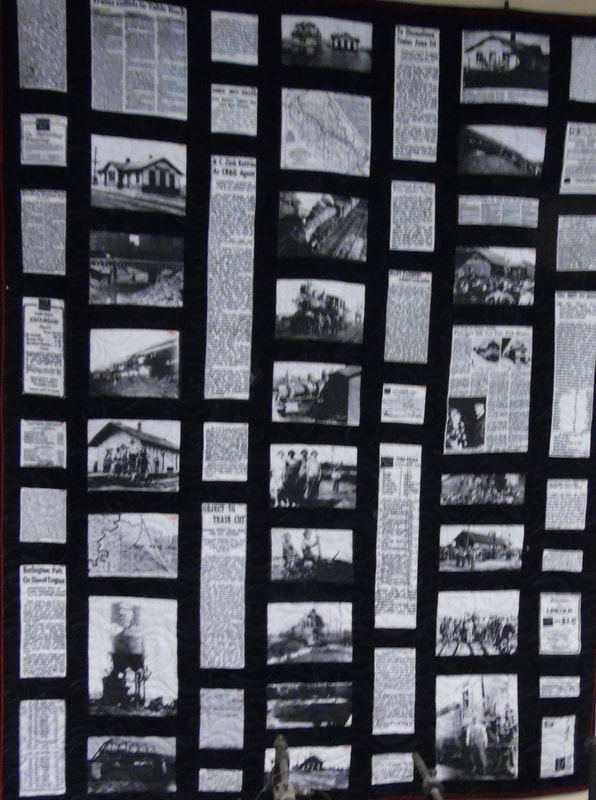 This is a slide show that shows some of the details of of the quilts: 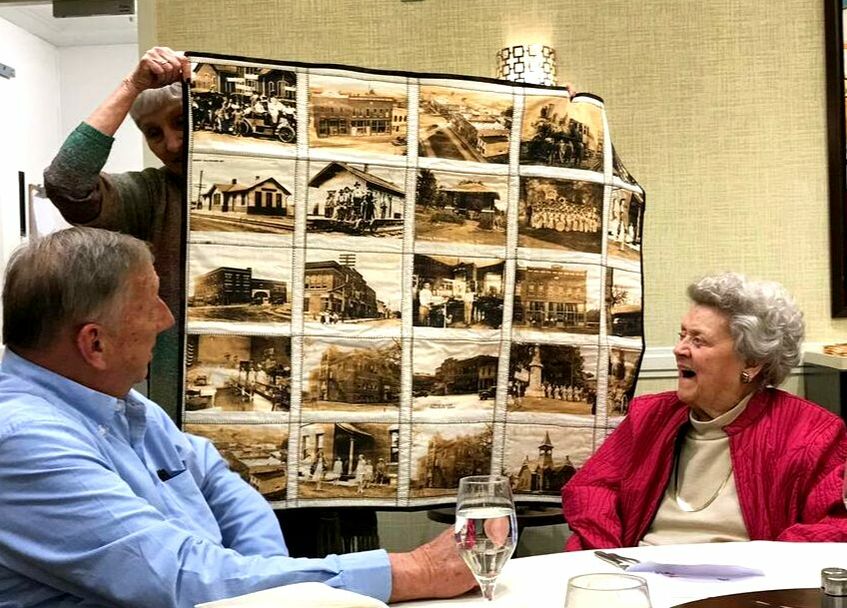 A lap quilt made for Helen Norris Siemsen Martin's 98th birthday by daughter-in-law Ceilia Siemsen, holding it; Marty Siemsen, Helen 's son & Celia's husband, is seated at left. Helen died in 2018 at age 99. She graduated from Table Rock in 1937. By the way, her names is on the 1929 quilt made with names of 4th & 5th graders.

When Becky Sitzman learned she had breast cancer, she decided that it was time to make the quilts for her kids that she had always intended.  Over the years, as she fought the cancer, she persisted in making quilts, one for each child, and then she tried to make one for each grandchild before her time was up.  She was obsessed with her quilting projects, and she was delighted with the process of asking each recipient what kind of quilt they liked -- what colors, what pattern.  It was a legacy that has been treasured by all.  Becky died in 2007 at the age of 73.

These are some of her last quilts: 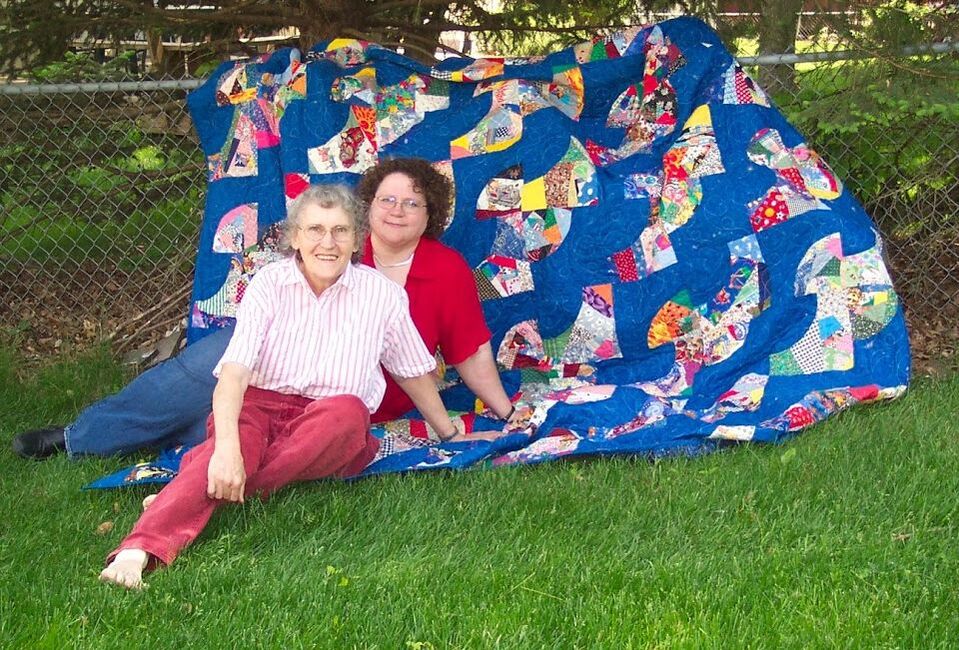 Becky Sitzman with daughter Sherry Winkinhofer and the quilt she made for Sherry
A slide show of Becky at work during a visit to daughter Sandy Cerra's house in Kansas City:

quilting at the Norris house

Since 2016, the Rowdy Roadies quilting crew has been meeting quarterly at the Norris House in Table Rock, just to make quilts. 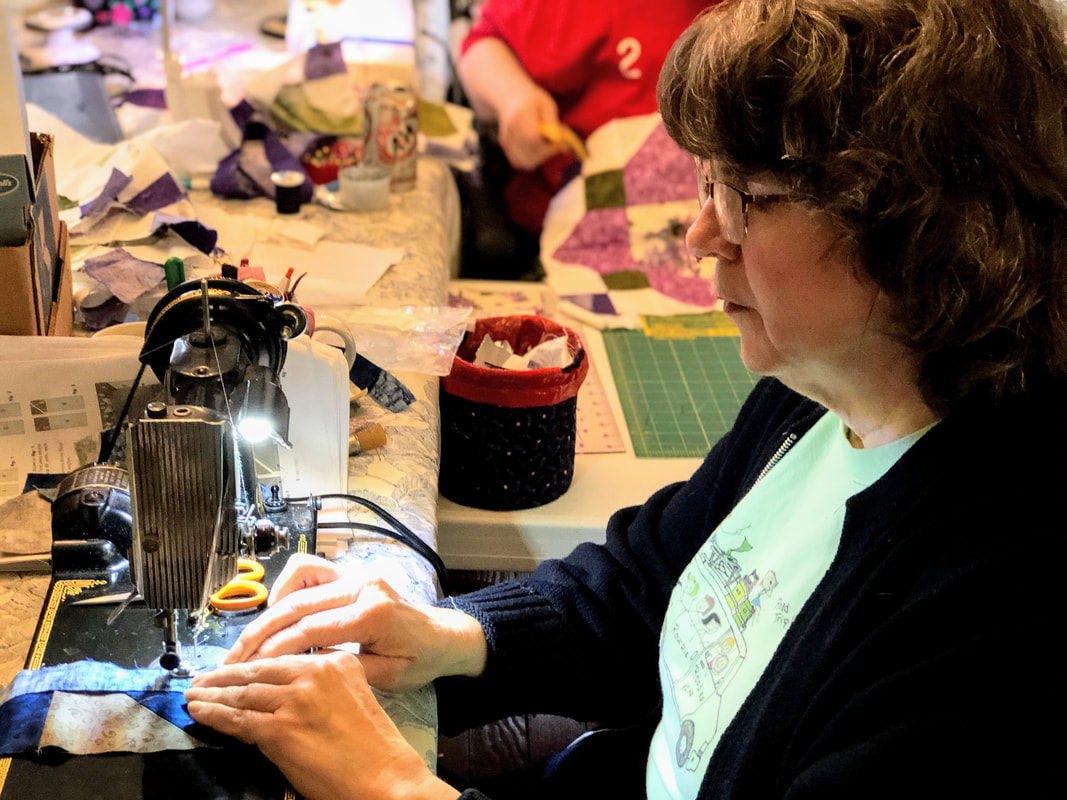 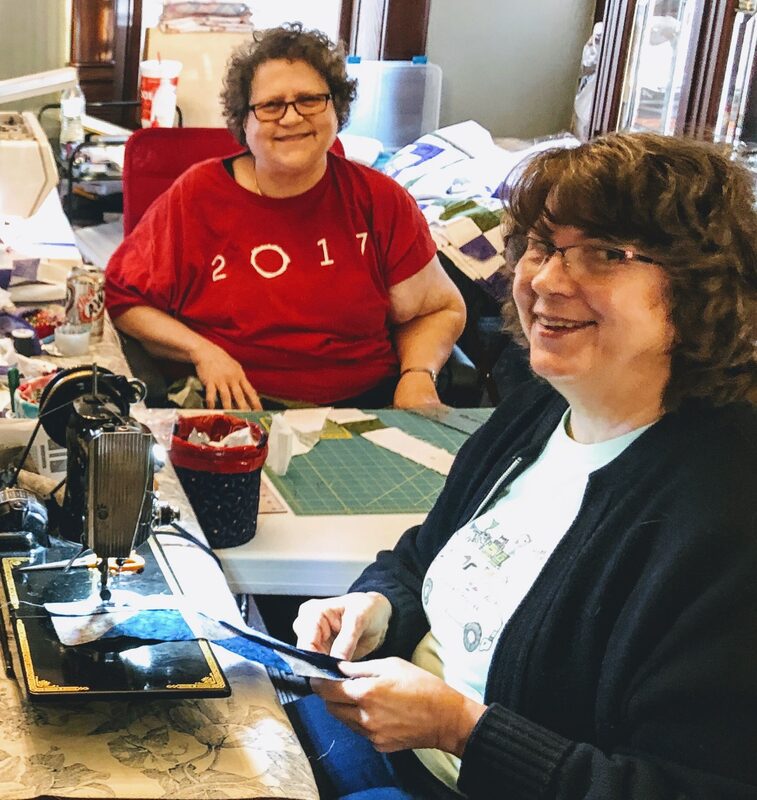 This article by Sharla Sitzman appeared in the Humboldt Standard & the Pawnee Republican:
View My Stats