THERE WERE TWO PURCELL FAMILIES, THAT OF SAM PURCELL AND THAT OF JAMES PURCELL.  NO TIE HAS BEEN FOUND.

SAM PURCELL'S FAMILY LEFT TABLE ROCK, LEAVING ONLY THE GRAVES OF HIS WIFE'S PARENTS, ASAPH & HANNAH FAIRBANKS, AND LITTLE IS KNOWN OF THEM.

​THE PAGE BELOW IS FOR THE JAMES PURCELL FAMILY.

the family of pioneer james purcell

Read about the Purcell stores, in the business section
Below are photographs, newspaper articles, and commentary about the Purcell family.  They are not in chronological order as the dates are not known for some of them.
Photo 440 - Circa 1888, Della Purcell and her brother Mylum 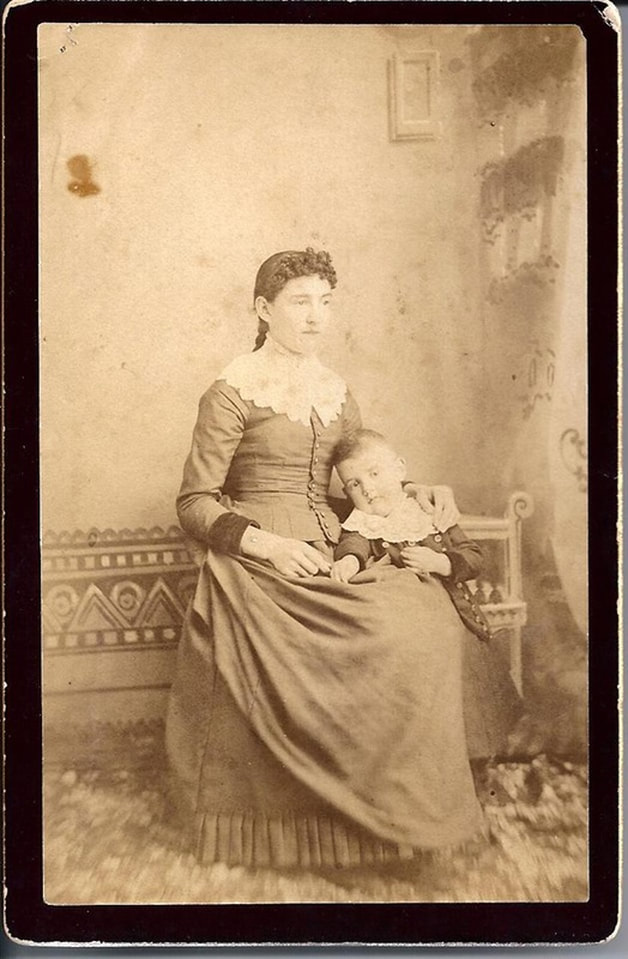 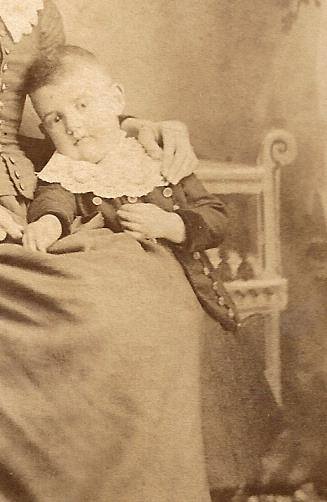 Photo 262 - Circa 1910, Classroom at District 33 (the school in town). Photo 262.  There are handwritten notes about the students' names. Unfortumately, there were 3 notes and their order was not maintained so we don’t know which students go with which name.  When posted on  Facebook, Terry Purcell said that Emory Purcell, who is on the list, was actually Emory Miller, who her great grandpa adopted from the Orphan Train.  Terry says the family story is that Emory Miller was so much trouble that they sent him back to New York.  Which one is Emory Miller is unknown. 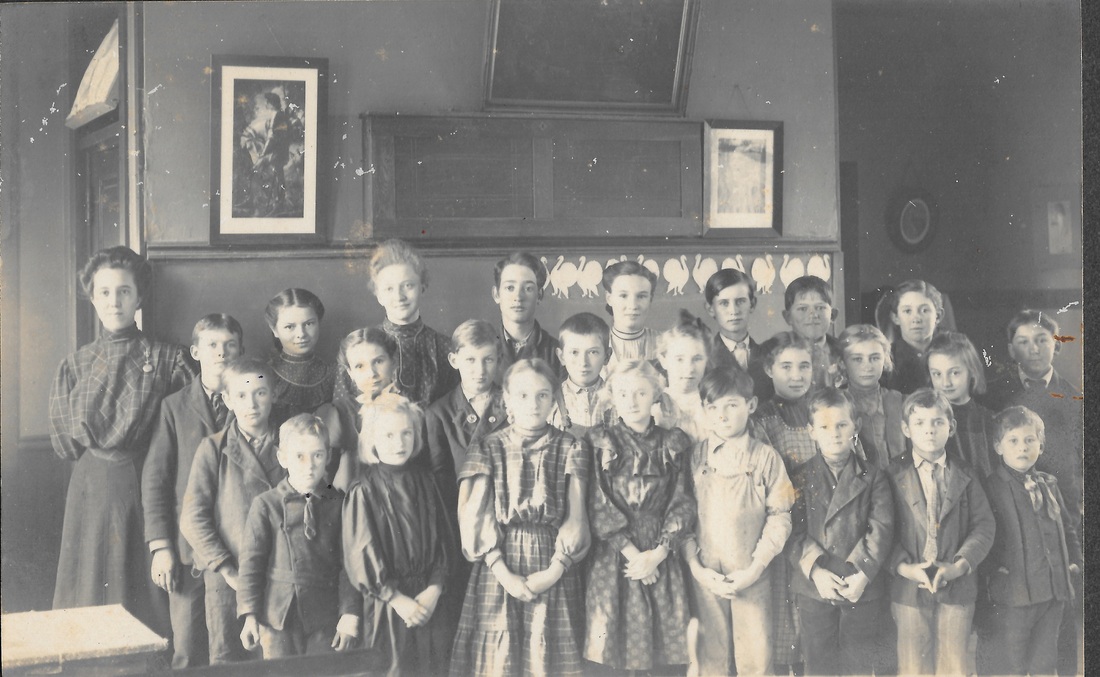 Photo 355 - 8th Grade Graduation Class including Mylum Purcell, back row, fifth from left not counting the teacher. (The original photo is fuzzy.) 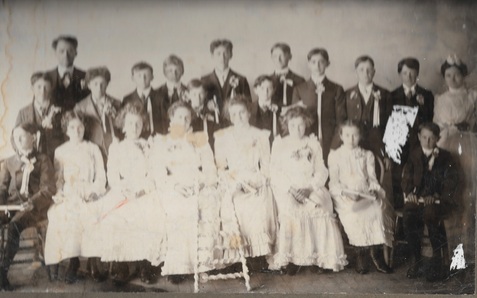 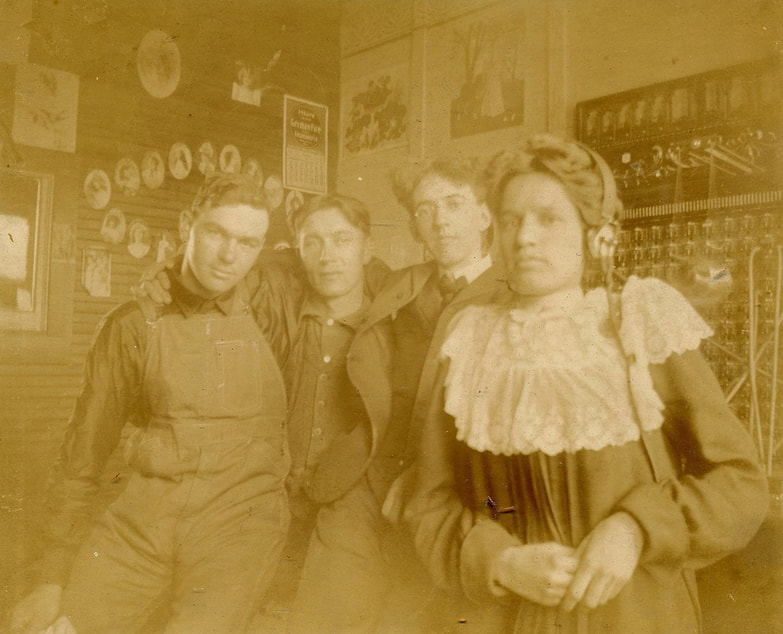 Photo 402 - The Table Rock depot. Mylum Purcell and niece Ruth McCoy are in the crowd.  Thank you to Terry Hunt Korell for sharing this family picture. 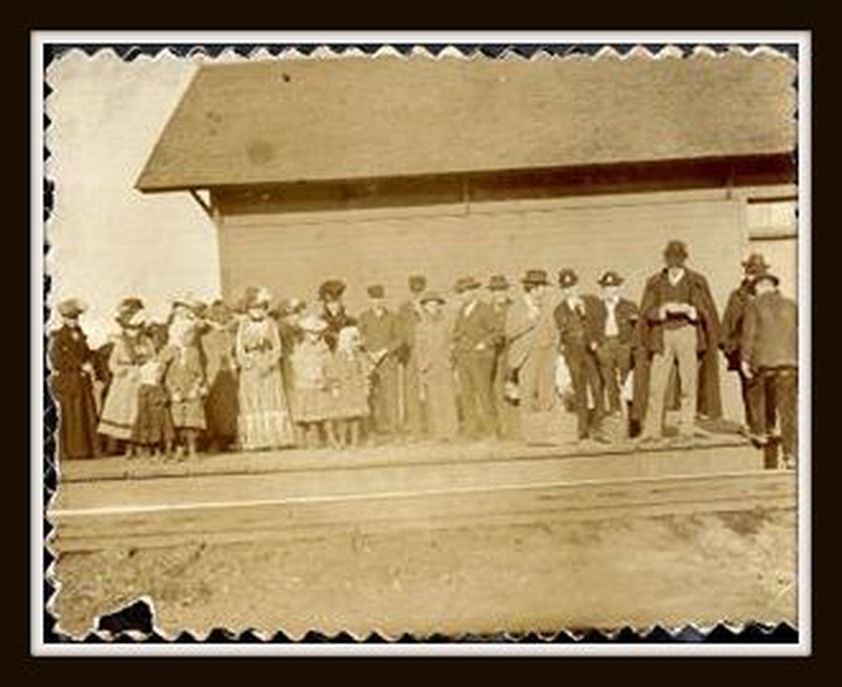 Ruth and Mylum excerpted from the crowd: 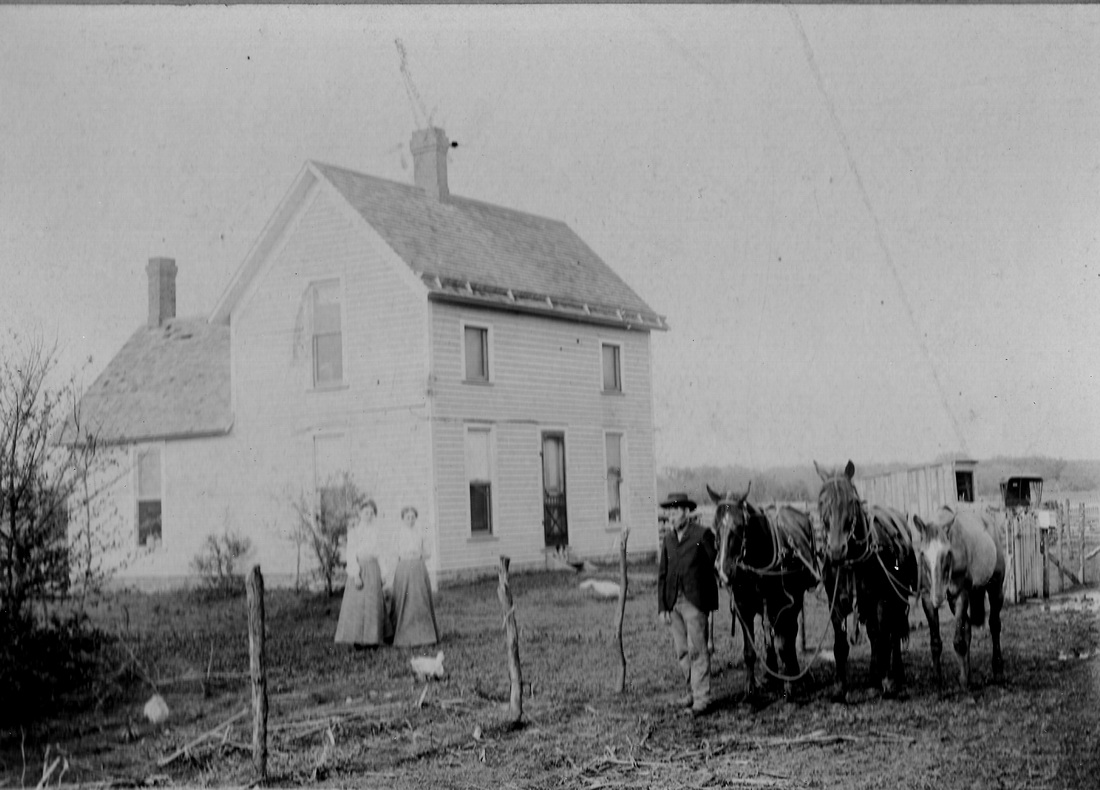 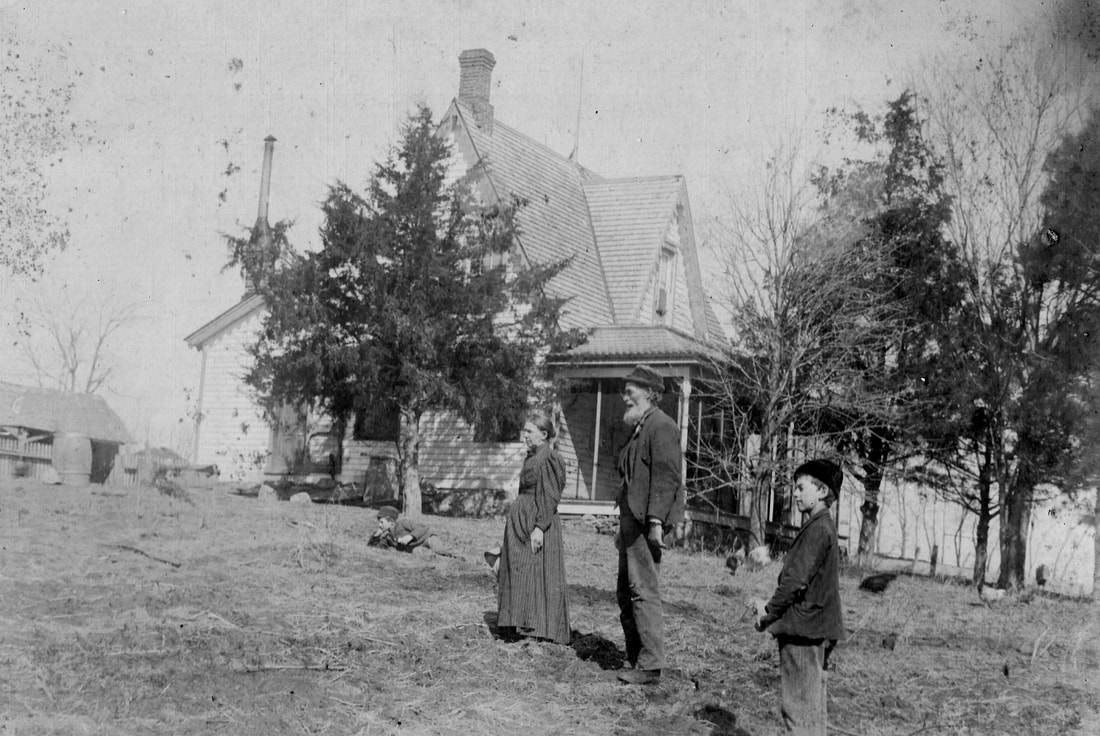 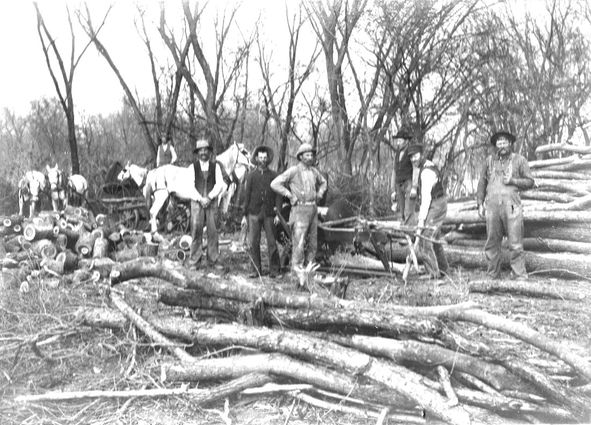 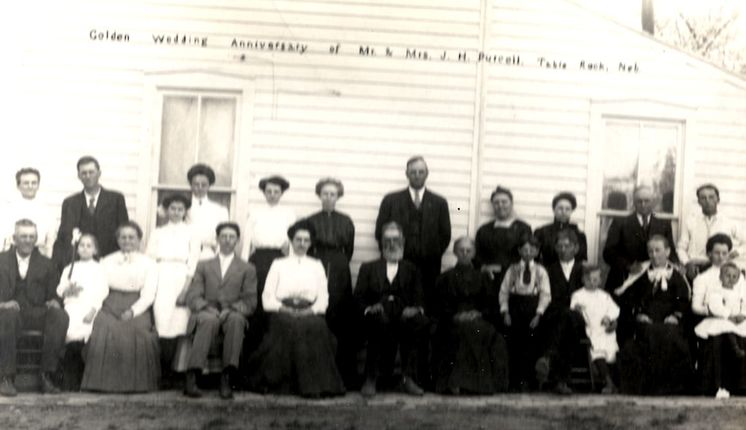 Purcell descendant Terry Hunt Korell has provided considerable comment on the identity of family members in the picture.
This photograph is of the Golden Wedding Anniversary of Mr. and Mrs. J. H. Purcell.  Per FindaGrave: James H. Purcell, 1832 – 1921, Margaret Purcell, 1843 – 1925.  Terry Hunt Korell, a Purcell descendant, responded to an October Facebook post with this:


The picture is pretty blurry but my guess from the shapes is that Della my Great Grandmother is sitting next to James Purcell the man with the beard in the middle of the front row and that my grandmother is the woman in the white shirtwaist in back of and to the left of Della. Of course Grandma Margie as they called Margaret is sitting next to James (Grandpa Jimmie).


This would have been the old farm house out where my Uncle Fred Muscheites lived only further down the road nearer the railroad tracks. It burned in 1932.


Aunt Stella would have been 18 so could be standing next to Grandma Ruth in the back row but I can't be sure. They had two sons Jack and Willard who should be in the picture, also Mylum who was much younger than the others.”


She added, “I think maybe the man to the right of Margaret is their son Jack Purcell with his wife Ida right behind him. He's the one who owned the Purcell Store.


Della, Margie, Stella, Jack, Willard.   “Della Purcell married Parker McCoy.  Grandma Margie was James H.s wife, her maiden name was Lane. Stella was Della’s daughter, therefore a McCoy at the time of this picture. Uncle Jack Purcell owned the Purcell store after the fire of 1920, before that it was JHs hardware store.  Willard was JHs oldest son.  Ida’s maiden name was Stewart. “

Here goes. These relationships are to James H Purcell whose anniversary picture this is.

I can't seem to find where Willam, Devilla, and Jane fit in.

So many of these died really young. Vivian and Beatrice were sisters who died within days of each other. The family story goes that the family went to the Pawnee County Fair where they ate something that gave them food poisoning and they died a few days later.

Mylum's daughter Genevieve was only 8 months old when she died.

Maudie Purcell, A J (Jack's) daughter was only 21 according to my Grandmother when she died of appendicitis. They operated on her on the kitchen table.

Edward Purcell was only 19 when he died. 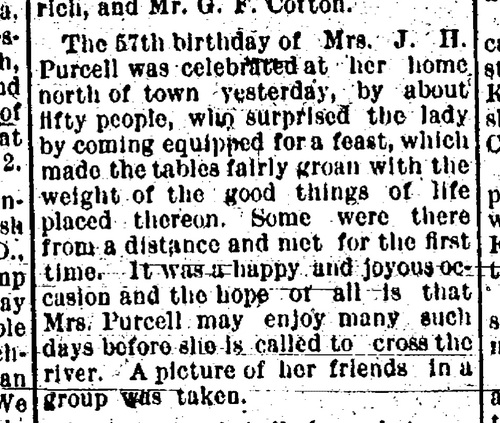 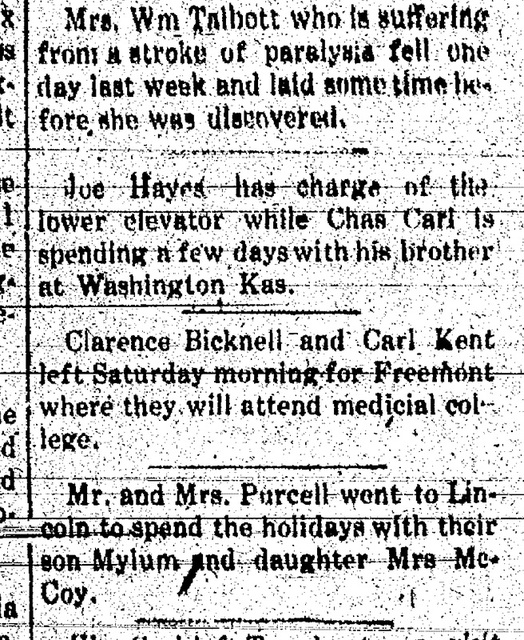 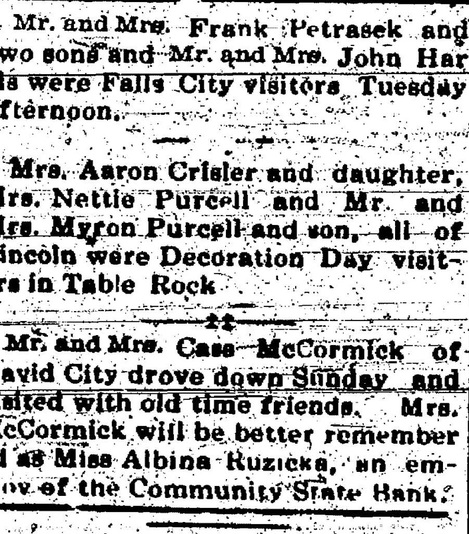 Photo 435 - The Purcell Store. Thank you to Terry Hunt Korell for sharing this family photo. 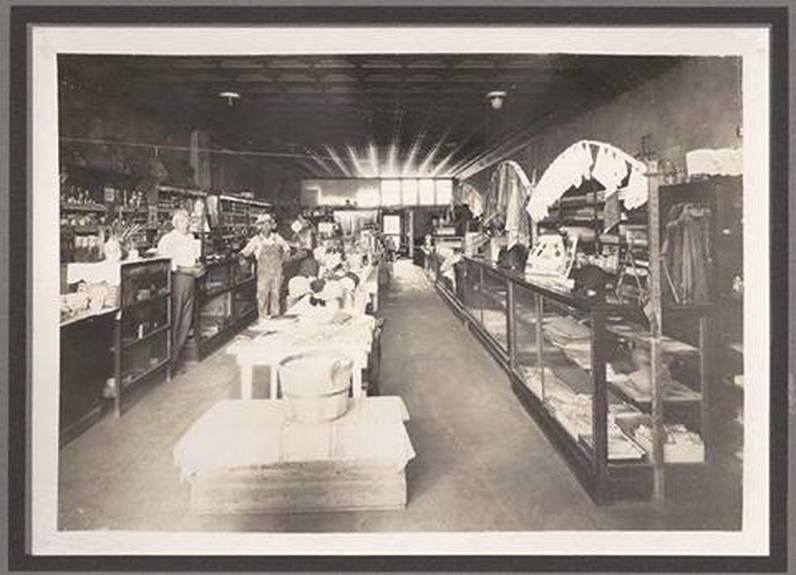 1891 - dressmaker in the Purcell building 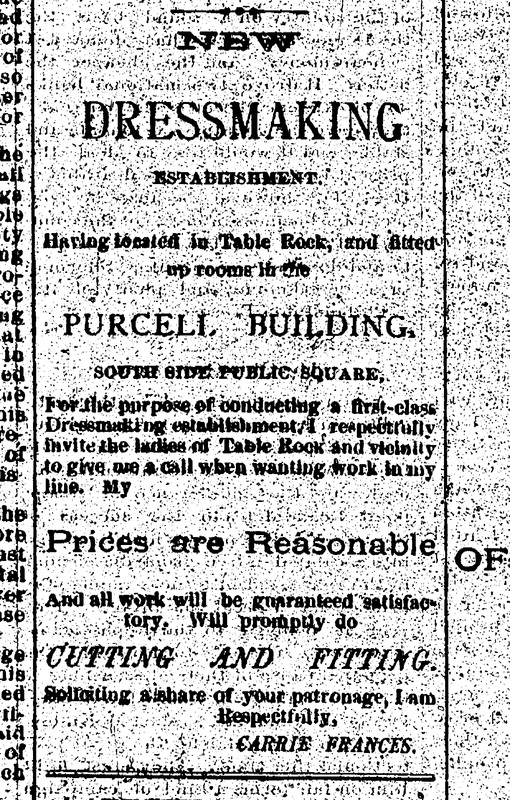 The Purcell store was on the South side of the Square. It is one of these buildings, almost certainly the first frame building looking at the buildings from RIGHT to left.  This is  Photo 467: 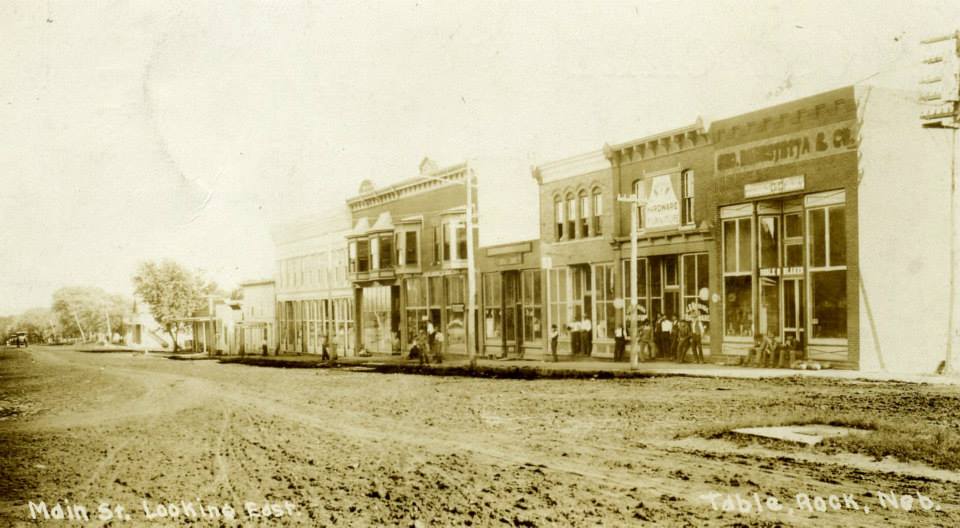 On February 6, 1920, the Purcell Store -- along with many other of the businesses on the South side of the square -- was destroyed by fire.  Actually as a result of the fire -- when the remaining wall of a building next to was knocked down after the fire, it fell on the frame Purcell store.
Photo 125.  Purcell's store can be seen on the far left, still standing. But not for long. 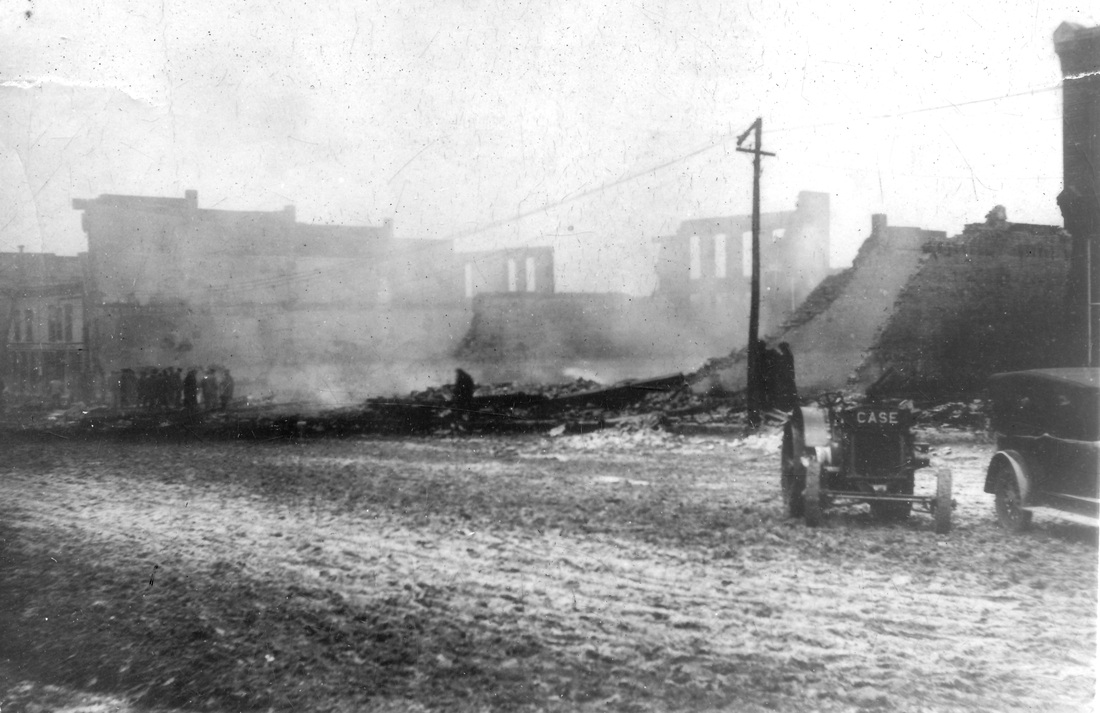 Purcell rebuilt. Eventually the store was sold. It was a grocery store run by Jeff and Crystal Knapp. It was the electronics repair store of Gary Vrtiska. Eventually it was torn down. Here is a view of the town with the the building still standing in its later days.  The Purcell store is in the middle of the block, standing alone. The block of buildings at the left survivied the fire, and the farthest two of the four buildings to the right. Purcell and the two buildings on the other side of the empty lot from it was rebuilt. The building attached to the left of the Purcell store was a blacksmith shop. 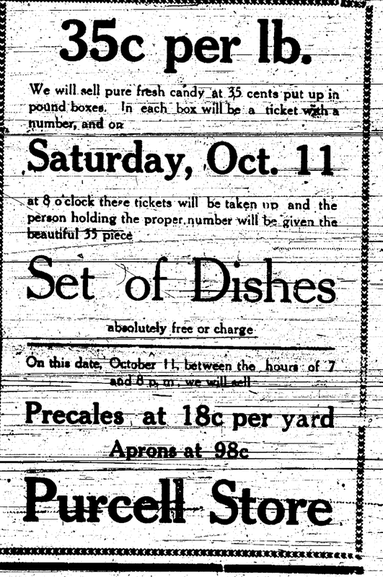 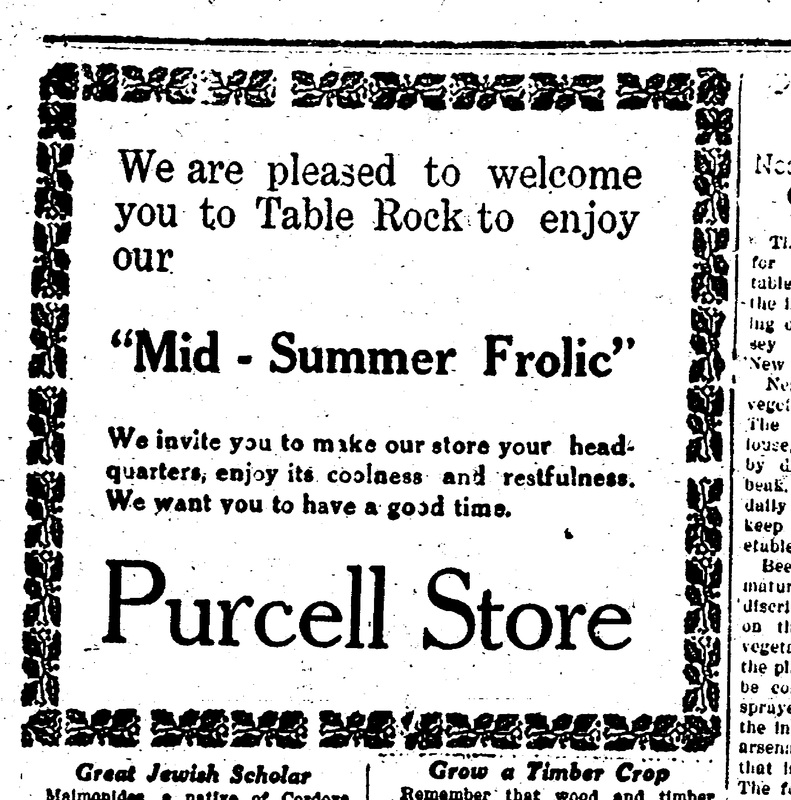