Here is a little family background to help sort through these photos. Gary & Terry's mother was Delores Burow Frank; she passed away on December 2, 1971.  Delores's father was Elmo Burow, and Elmo's father was Charles F. Burow, called Charley; Gary thinks Charley,  his great grandfather, may have been the camera bug, because he is not in many pictures.
​ 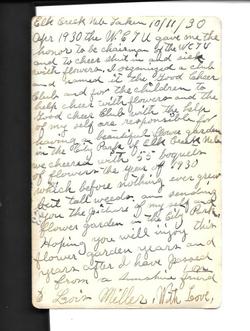 April 1930, the W.C.T.U. [Women's Christian's Temperance Union] gave me the honor o be chairman of the WCTU and to cheer shut ins and sick with flowers.  I organized a club and named it the Good Cheer Club and for children to help cheer with flowers, and the Good Cherr Club with the help of myself are resposible for having a beautiful flower garden in the City Park of Elk Creek, Ne. We cheered with 55 bouquets of flowers in the year 1930 which before nothing ever rew but tall weeds. Am sending you the picture of myself and flower garden in the City Park. Hoping you will enjoy this flower garden years and years after I have passed.  From a sunshine friend, to Lois Miller, with love.

Historical Society member Jeanette Lauritsen labored to transcribe the words on the back and came up with this, which member Luella Hinrichsen concurs:

To Wayne when you was home on furlough from the Army. From Grand Parent Mr & Mrs C F Burow. Taken in Humboldt your home From Grandparents C F Burow.

Gary Frank says that C. F. Burow was Charles Burow. He had sons Carl and Elmo.

Kari Cumro Kanel says of Wayne, "There was a Wayne Burow from Humboldt. He passed away a few years ago. He lived on Long Branch Street in the house Mezger's own. His wife passed away last year."  Jackie Uhri added, "You are correct. I worked with Wayne at Cooper Feed (shows my age!)"  Heather Duryea said, "His daughter is Cindy. She still lives in Humboldt."
View My Stats