Back to families
Back to oral histories

Below, in 1912: Ethel (back center) with her parents John & Etta Tibbets, brothers Jean, Earl, and Carl and baby sister Lona. 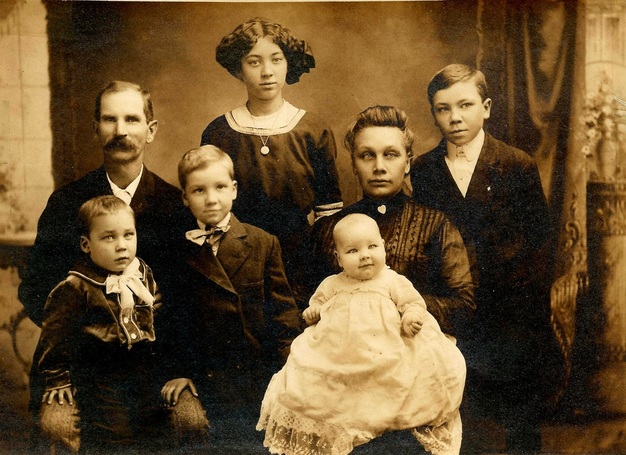 My grandmother Ethel Tibbets was always very independent and adventurous as I recall.  She was also very small in stature being only 4'10" tall but she bore and raised 8 sons in 18 years while moving from one state to another.  Grandfather was over 6' tall so he needed to be seated when they had their picture taken together.

Grandmother told me about her life growing up in Table Rock NE.  Here is the story.  I thought people might find it interesting about the way they lived in the early part of 1900s.

​A trip to Burlingame, Kansas by covered wagon, in 1900

When Ethel was 4 years old in 1900, her great-grandfather and her parents took a trip from Table Rock, Nebraska to Burlingame, Kansas [a distance of 120 miles by covered wagon. They went to visit Owen’s brother James Crisler.  It took one week to get there. They crossed the Kansas River on a ferry at St. Mary’s, Kansas [a distance of 82 miles]. The trip was something grandmother remembered as being an exciting adventure.
A trip alone by train at age 10

When Ethel was 10 years old she packed her suitcase and went to the train station where she purchased her own ticket and went to visit someone in another town.

Taking care of a baby with colic at age 15

​When she was 15 years old she babysat with a little 3 week old baby who had colic.  His father told Ethel they hadn't had much sleep and he needed to sleep.  She went outside and cut some catnip, making a weak tea from it and gave a tiny bit to the baby.  He slept the entire night.

The young people had square dances at people's homes.  They usually all went in a "hack" pulled by a team of horses.  The hack is similar to a coach with windows and a door.

Ethel went to another town with some friends to a dance one evening and it got very cold.  When they left in the "hack" it was so cold the boys had to trade off driving every few miles so they wouldn't freeze to death.  They didn't get home until 4 a.m.

​Ethel’s parents, John & Etta Tibbets, and maternal grandmother Kesiah Tibbets – Life on the farm, then a move to town

Ethel’s parents, John and Etta Tibbets, lived on a farm northwest of Table Rock, where Ethel was born. They lived with John's mother Kesiah (Nicholson) Tibbets.  When Kesiah died in 1903, the farm had to be sold and divided up among the heirs. Ethel was just 6 years old at this time.

Table Rock is built along a creek and the town area is made in a town square with a large park in the square which spreads to one block each side.  They had ice cream socials and band concerts in the park.

John’s older brother Oscar and his wife Martha helped put the children through school.  Their two young sons had died in 1881 and 1882 when they were only ten and eleven years old.

Ethel lived with Oscar and Martha during this time because she was the oldest child and could help them at their store. They owned a variety store with one side a grocery store and the other a millinery shop where Aunt Martha made and sold hats and material.  Aunt Martha made two hats every year for Ethel.
​They raised hogs, chickens and cows on the farm.  Ethel had a couple of cows to milk each morning.  There was no electricity at the farm and the roosters would wake them up early each morning.

Ethel started wearing glasses when she was about 14 or 15.

Ethel lived at home for 25 years, until she had been three years. She was born and married within 1/2 mile.

Ethel's parents lived on the farm for 6 years, until 1916.
View My Stats