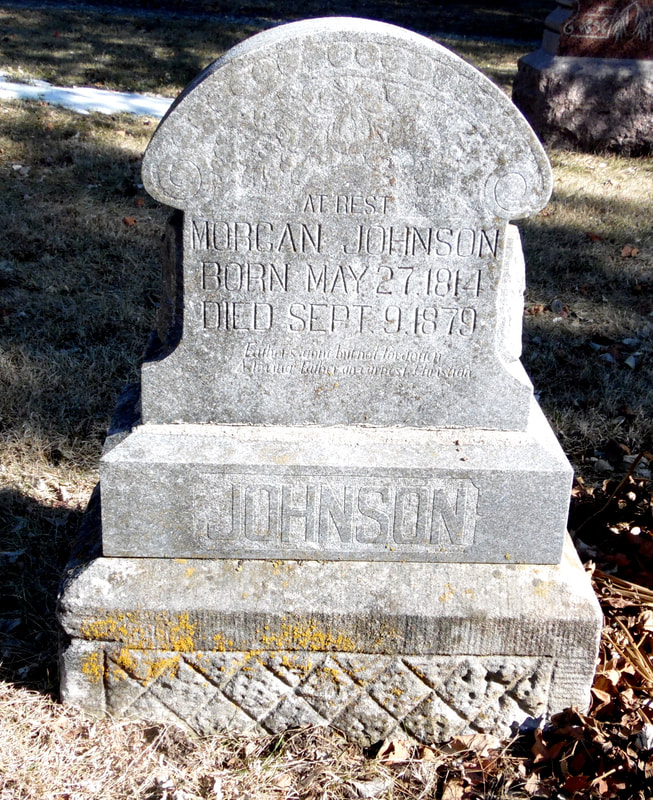 According to his obituary, Joseph L. Johnson was born in Michigan in 1837. In 1863, he married Eliza Kidney and they had three children, Henry A. Johnson, and two of whom died as children. He and Eliza came to Nebraska in 1871; he was 24. Eliza died in 1872.  In 1873, Joseph married Emma Comstock, and they had six children: George, Alma Johnson Branam, Victor, Rose Johnson Leffingwell, Lester, and one other.

Joseph Lyman Johnson was born April 19, 1837 in Michigan, and came to Nebraska in 1871. He was married, November 1st, 1863, to Miss Eliza Kidney, to this couple was born three children, two dying in infancy and the one surviving is Henry A. Johnson, now living in Trego county Kansas. Mrs. Johnson died February 17, 1872.

He was married the second time to Emma Comstock, November 10th, 1873, at DeWitt, Nebraska. To this union were born four sons and two daughters, all of them survive, save one son. The names of those surviving are: George Johnson, Alma Branam and Victor Johnson all of Trego County Kansas. Rose Leffingwell, Wallace County Kansas, and Lester Johnson of Pawnee County Nebraska. His second wife died April 23, 1907.

The funeral services were held at the Christian church at Table Rock on Monday afternoon at 3 o'clock, conducted by Rev. Dr. Beattle of Lincoln, and the remains were buried beside those of his wife in the Table Rock cemetery. The surviving sons and daughters have the sympathy of a large circle of friends in their bereavement.

​HENRY JOHNSON DIES; FINAL RITES HELD HERE.
Funeral services were held for Henry Johnson, 78, who passed away at the home for aged in Pawnee City Monday. Final rites were held at the Kovanda Chapel in Table Rock, with Rev. B. F. Parnell in charge.

Mr. Johnson had been a resident of Table Rock most of his life and during the past years, had been staying at Pawnee City. Burial was made in the Table Rock cemetery.

He was united in marriage to Margaret McDonald at Frankfort, Kansas. To this union two children were born, namely, Lola and Georgia.

He was gentle and kind and a good neighbor to all who knew him. He was a member of the Free Methodist church.

He leaves to mourn his passing his two daughters, Lola Lindberg of Gering, Nebr., and Georgia Cook of Vermillion, Kan.; three grandchildren, Robert Cannon, Jack Lindberg and Robert Cook; three brothers, V. C. Johnson and L. O. Johnson of O'Neill, Nebr. and George B. Johnson of Table Rock, and a host of friends. 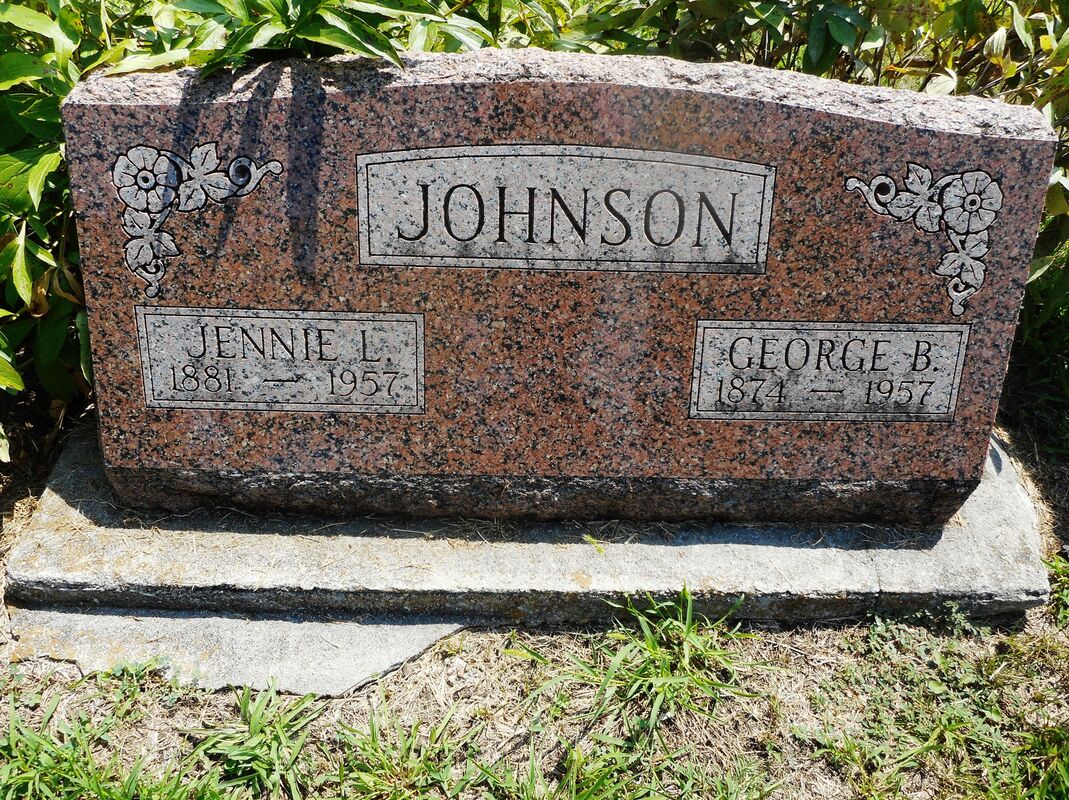 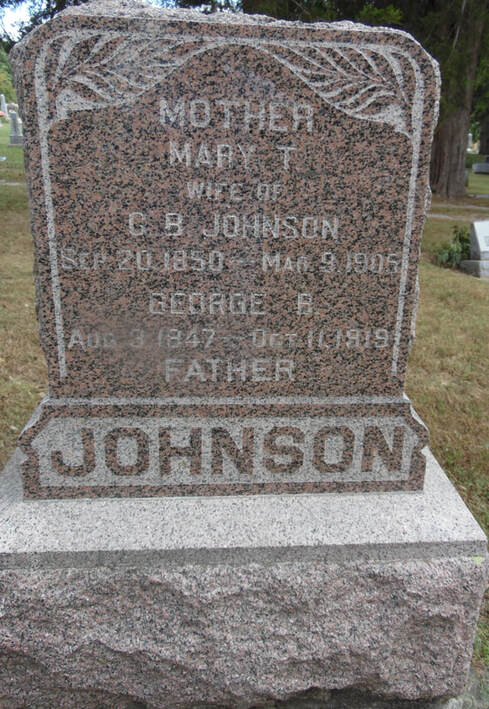 George ("G.B.") and Mary Straight Johnson (1847-1919, 1850-1905) were married at their home town in Michigan in 1866.  According to G. B.'s obituary, they came to Nebraska in 1869, settling in Johnson County, just across the line from Pawnee County.  Daughter Susan Evaline Johnson was born in 1874, and according to an article about her birthday in old age, the family moved from Johnson County to the old A. J. Kovanda farm near Table Rock a "short time" after.

Born two years apart, Sidney died at age 4 of tubercular meningitis, and Flossie at 11 of appendicitis. They share a common stone, which appears to be homemade in part. 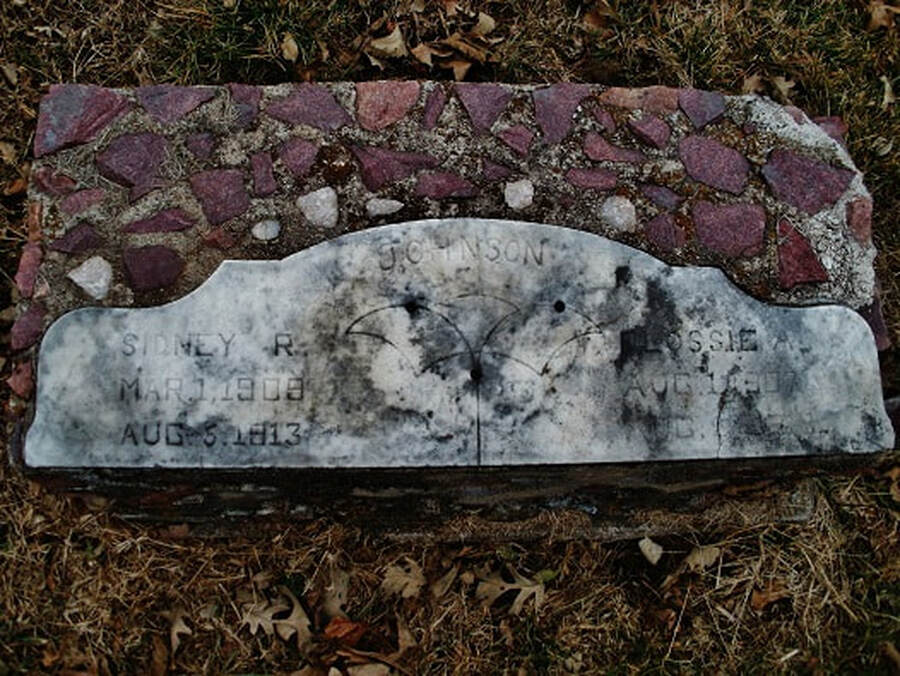 Bernice Johnson Oellerich, 24, daughter of Mr. and Mrs. M. B. Johnson, has accepted a position in the army signal corps as post telephone operator at Camp Upton, N.Y., according to a letter received by her father this week. She is the youngest child of the Johnson family to enter the service of Uncle Sam in the present war. Two of Mr. Johnson's sons, Ralph who is stationed in Long Island, and Alonzo at Washington D.C., are in the army now. The Johnsons had three sons in the first World War, Ralph, Ernest and J. B. while M. B. himself served as finger-print expert in the army during the last war. That is a fine record for any family

Frank is buried in the Tecumseh Cemetery.

Of her family of nine children, six brothers and three sisters, she and her sister, Mrs. Myrta Pattison, survive.
​

Table Rock Argus, March 25, 1898.- John Pattison and wife have returned from literary. It will be remembered that a year ago the 19th of last February John and Miss Mertie Johnson left the home of Charles Linn to attend literary at the Allison school house and from that trip they have just returned with Miss Johnson transformed into Mrs. Pattison. Instead of going to literary that night they went to Lincoln where they were married, then they went to Upton, where they took up their abode on a ranch and lived there until they thought it time for literary to adjourn and then returned to Table Rock.

NOTE:Next issue of the Table Rock Argus is missing where her obituary probably was.

Funeral services were held Wednesday afternoon from the Table Rock Methodist Church for Mrs. Myrta E. Pattison, who passed away Monday, May 9 at the Gordon Nursing Home in Pawnee City. Mrs. Pattison was 86.

She had been in failing health for the past few months. She had been a resident of Table Rock for many years until her health began to fail her.

Services were in charge of Rev. Alvin Trucano. Interment was in the Table Rock cemetery.

Mary Alvena Johnson, daughter of Mary Teresa Straight and George Byron Johnson, was born March 25, 1882 in the vicinity of Bunker Hill. She passed away on August 3, 1960 in the Pawnee County Memorial Hospital.

She was one of a family of nine children. Six preceded her in death, three brothers having died within one year. Two sisters, Mrs. Eva Linn and Mrs. John Pattison survive.

On December 2, 1900 she was married to William F. Burow of Table Rock. To this union two children were born, the older brother dying in early infancy. A son, Hollis V. of Pawnee City, his wife, Lona, one granddaughter Peggy (Mrs. Kenneth E. Butler) and four great-grandchildren remain; also a number of nieces and nephews.

Vena, as she was known by her friends, was a member of the Christian Church of Table Rock, and a member of the Rebekah Lodge February 10, 1932. She served as Noble Grand in 1935 and received her 25- year jewel on September 23, 1957. Vena was a faithful member and attended lodge as her health permitted.

She will be missed by her family and many good friends, all of whom knew her cheery smile and of her home filled with most beautiful flowers. 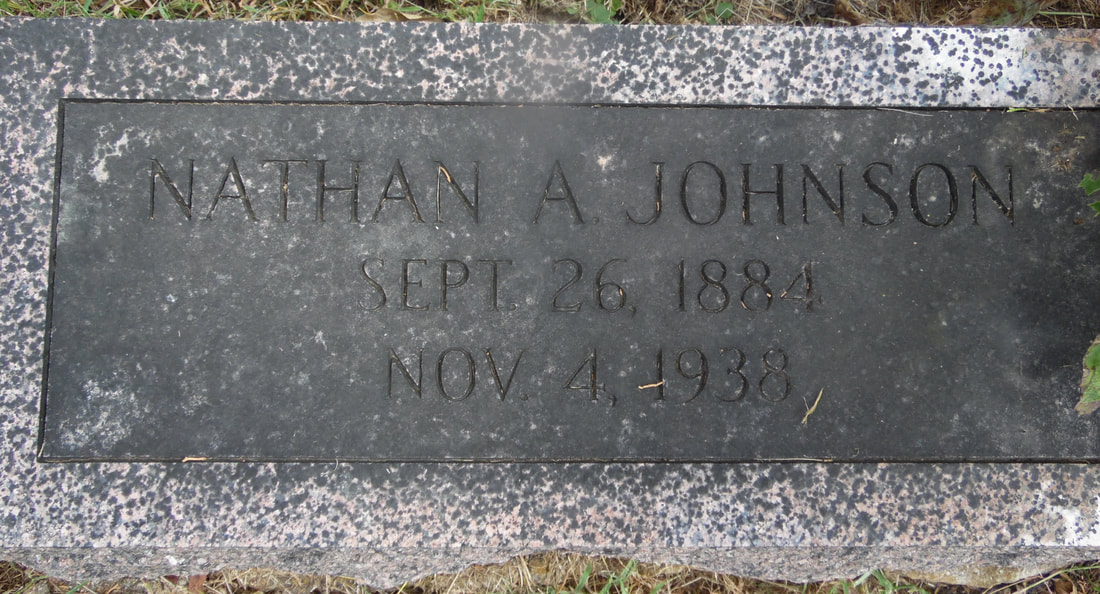 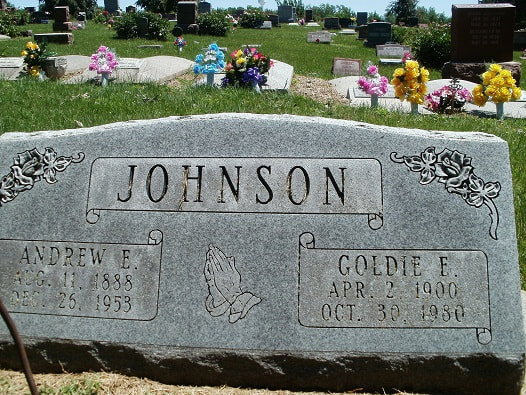 Andrew married Goldie Stover, daughter of George W. and Dora Mae Jaeka Stover.  His obituary says that he and Goldie had four children, but we don't know their names.  It also says that he and his father -- who would be Morgan Johnson -- operated a livery stable in Pawnee City for a while.
NOTE: Birth year would be 1889 as Obituary has, if the age and birth date is right, although the stone has 1888.

Funeral Services were held in Lincoln Monday morning and in the Methodist Church in Table Rock Monday afternoon for A. E. Johnson, former Table Rock resident. Last rites here were in charge of Rev. Virginia Myers.

Burial was made in the Table Rock cemetery.

Mr. Johnson, who was stricken by a severe stoke two weeks ago, passed away at the St. Elizabeth Hospital in Lincoln, Saturday. He was 64 years of age.

He was the son of the late G. B. and Mary Theresa Johnson.

He attended the Table Rock public schools. Mr. Johnson had spent his boyhood with his parents in Table Rock until the death of his mother, when he and his father made their home with a son, Nathan, at Pawnee City. Together there they operated a livery stable, before moving to Dunning where he and his father and brother operated a ranch.

Serving in World War I as a Private, after enlisting at Saint Francis, Kansas on October 2, 1917, he served in the Lucy sector, in the St. Mihiel offense, the Eavegin sector and the Muse Argonne offensive, before being discharge June 2, 1919.

Following his discharge, he was united in marriage to Goldie E. Stover in 1919. Their family of four children was born in Table Rock, after which they moved to California for a period of 1 1/2 years before returning to Lincoln where he was employed at the Veteran's Hospital.

Mr. Johnson was a member of the Christian Church.

He is survived by his wife and four children: Andrew Edwin, Robert A., Dorothy Moritz, and Byron all of Lincoln, Nebr.; six grandchildren; three sisters: Mrs. Eva Linn, Mrs. Myrta Pattison, and Mrs. Vena Burow, all of Table Rock. Five brothers, M. B., Frank, Nate, Ralph and Charles, preceded him in death.
​ 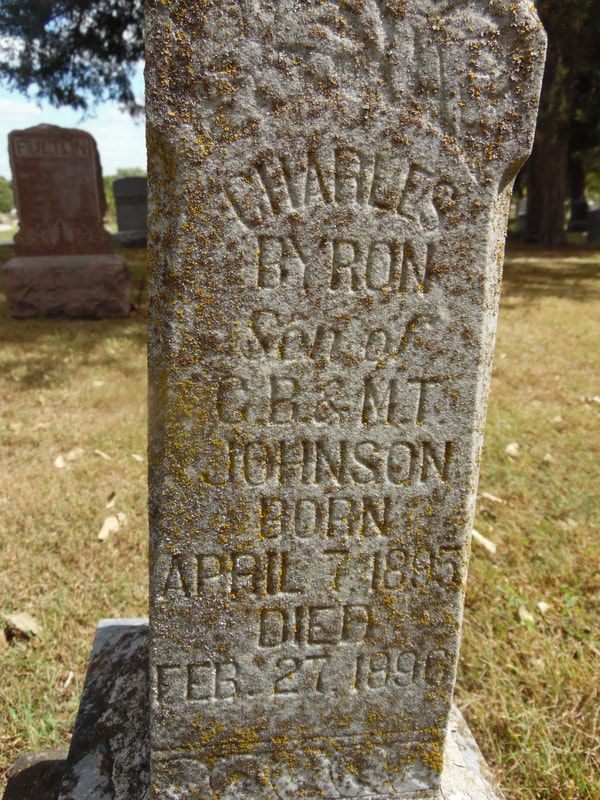