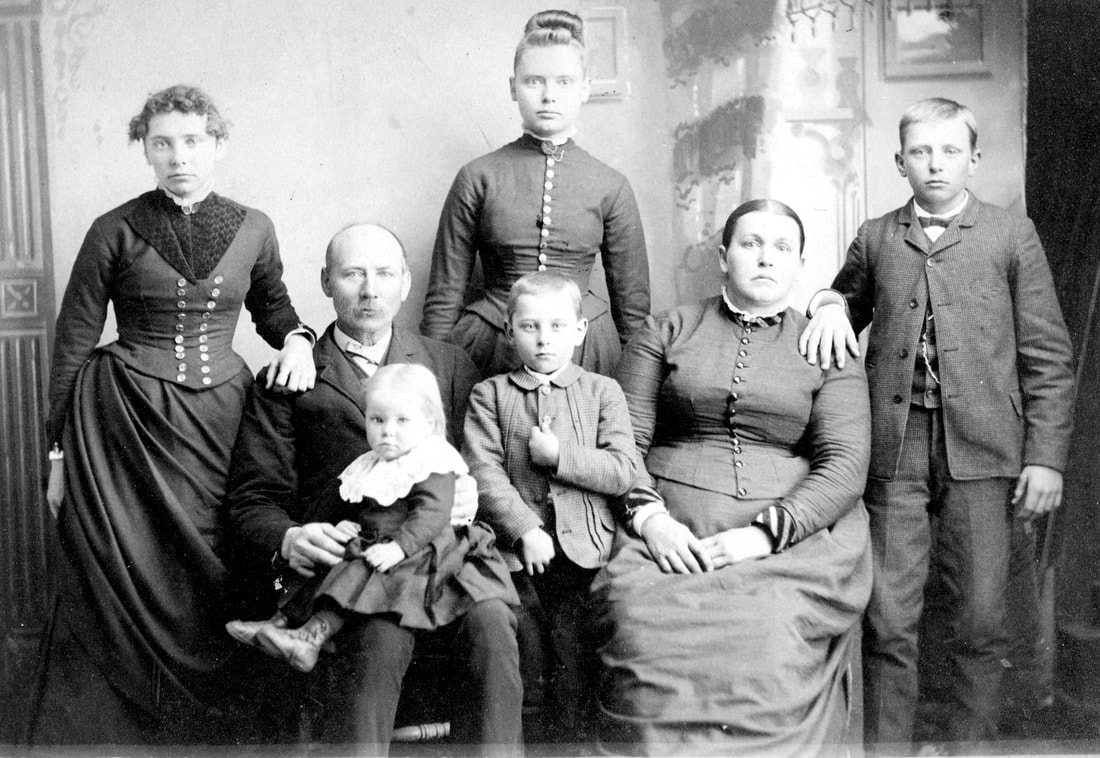 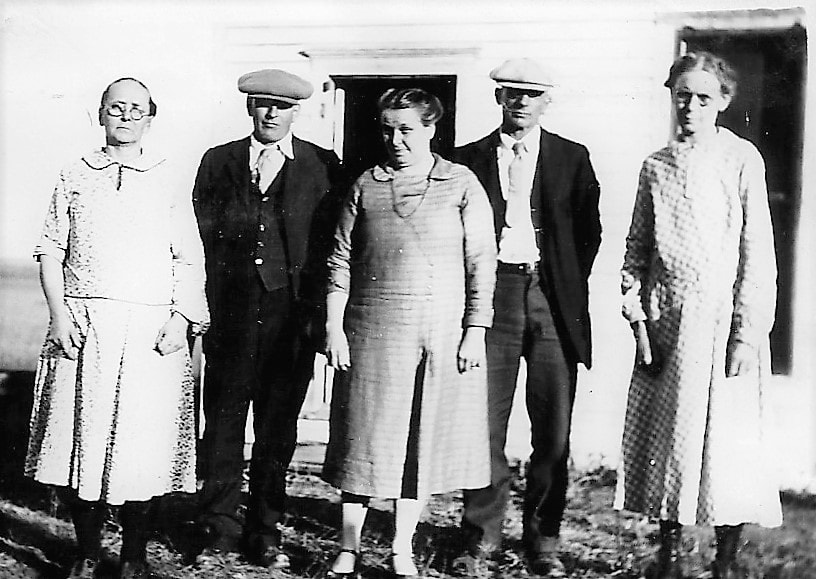 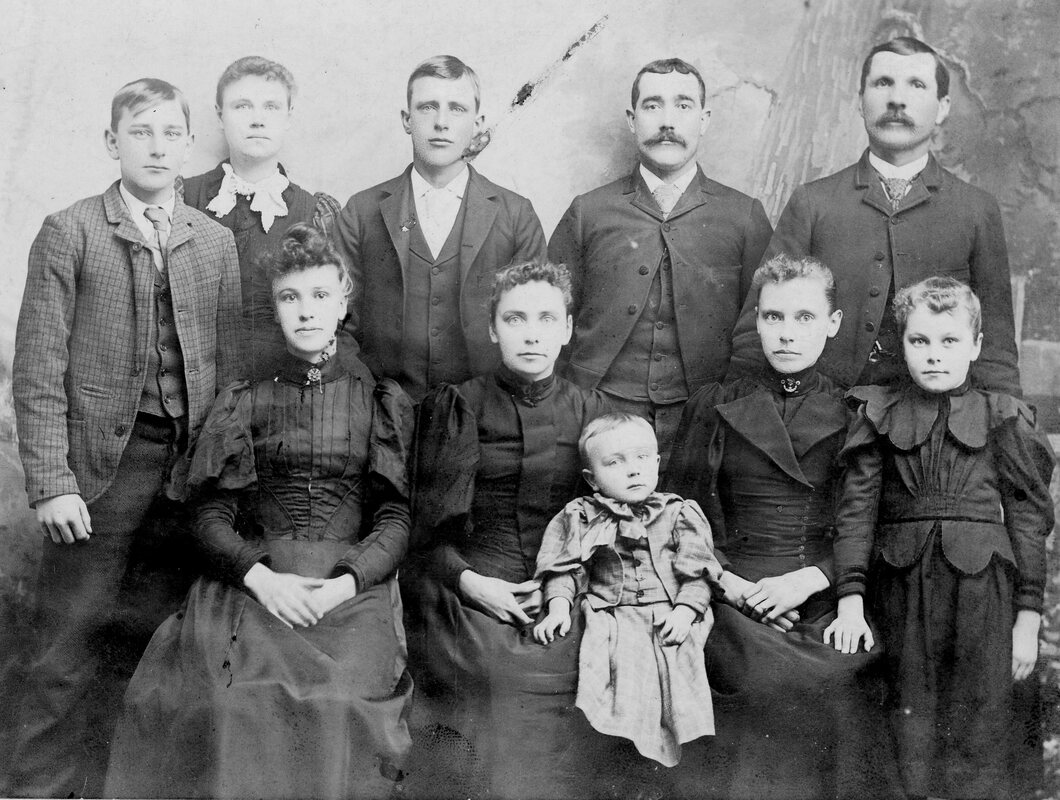 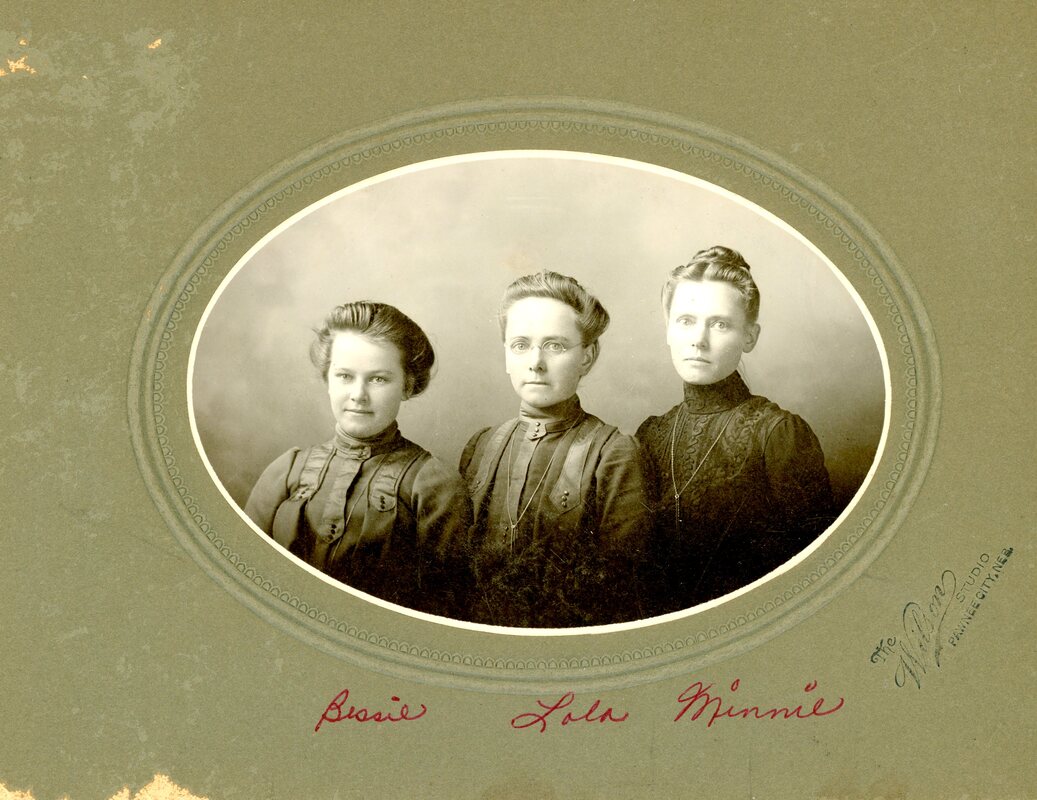 Here is the family home of William DeArcy Herrick.  It was taken in 1888-1890 because Bessie was born February 22, 1886 and looks about 4 years old. Murray Herrick is by the team, Lola Herrick Phillips is by the gate as is William DeArcy, the father; John Herrick is sitting on the post.  Mary Adelina West Herrick (the mother) is to the right,  and the girl in front with the doll is Lillian Bessick Covault. 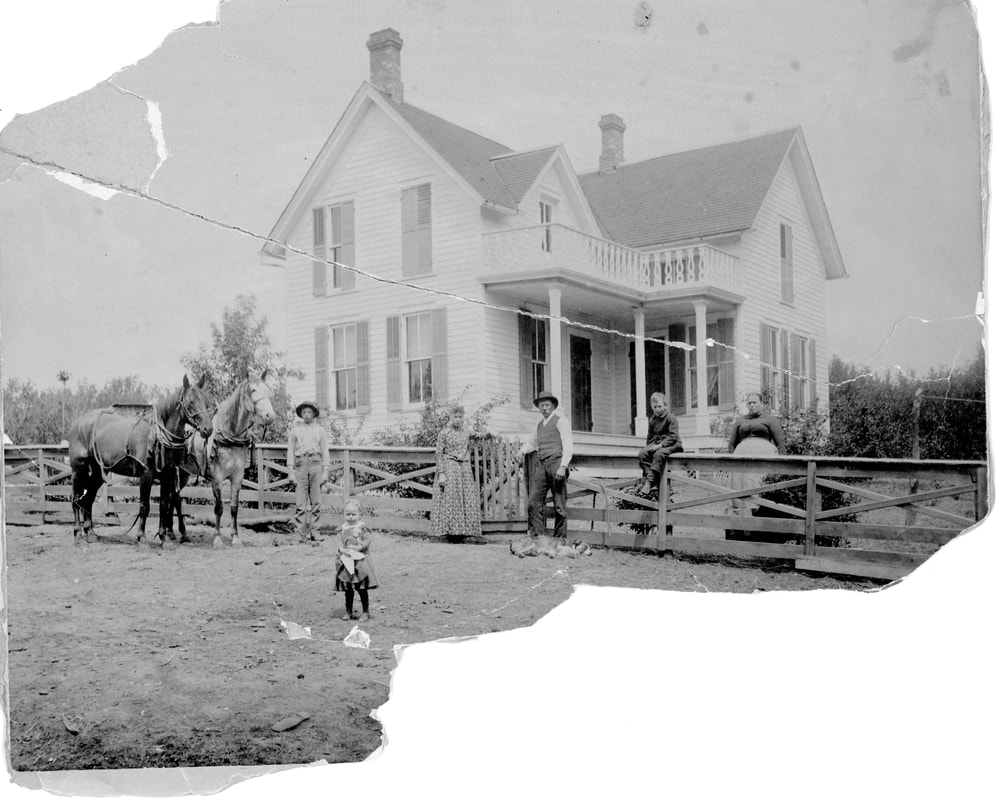 Lola and Bessie sit in the front yard of their home.  The family story passed on by Bessie's great grandson Brad Bowen is that in about 1872, the Herricks acquired this home when in a 18712 a man from Stella traded a team of horses for it. 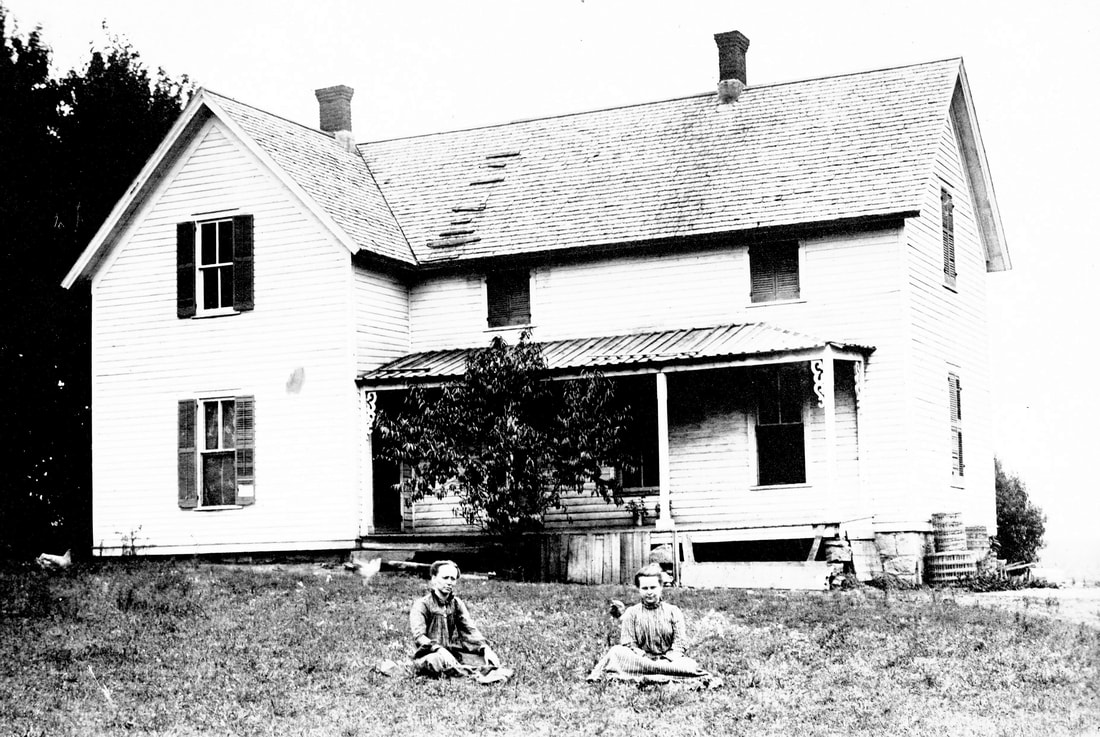 Photo 3961. A detail of it showing the girls is below. 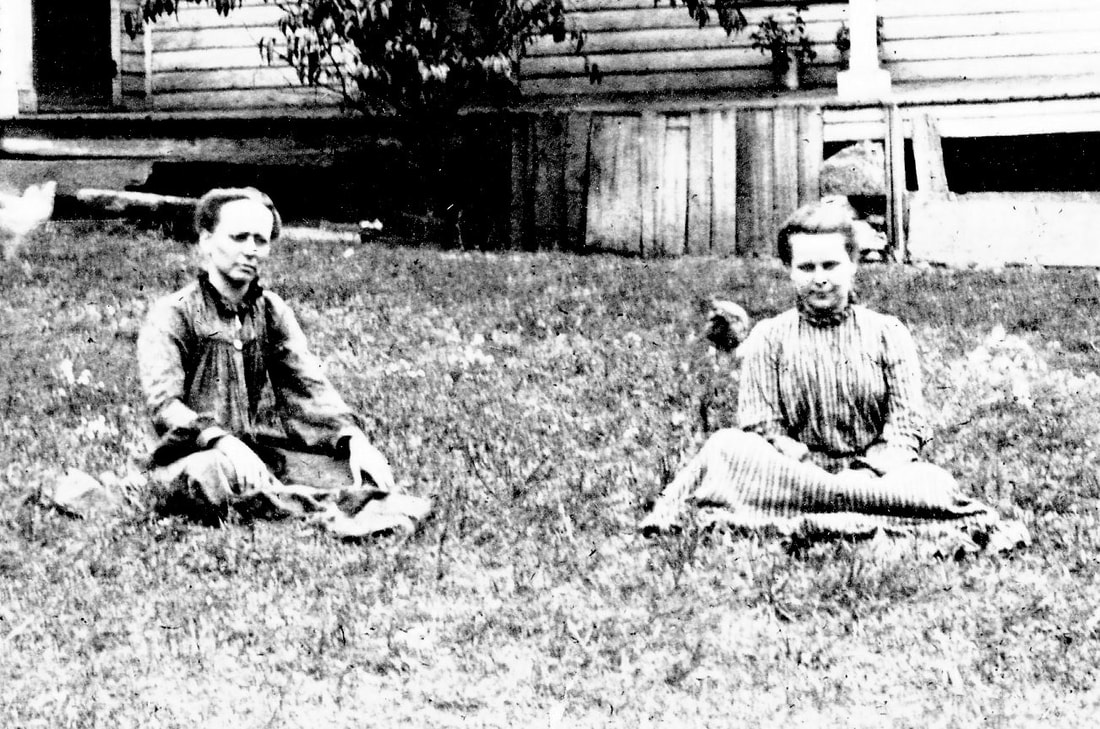 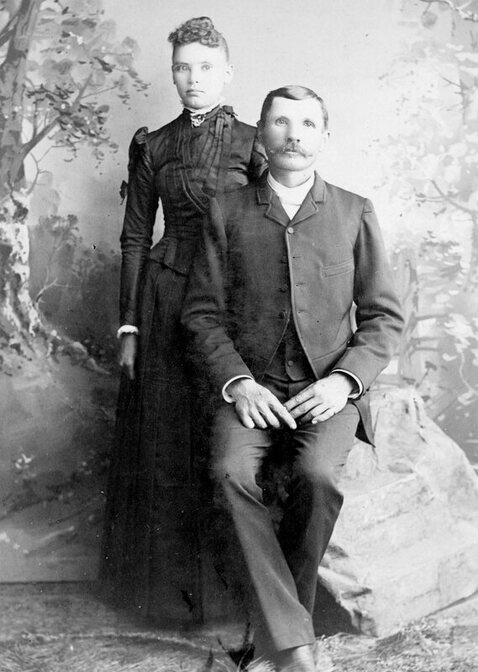 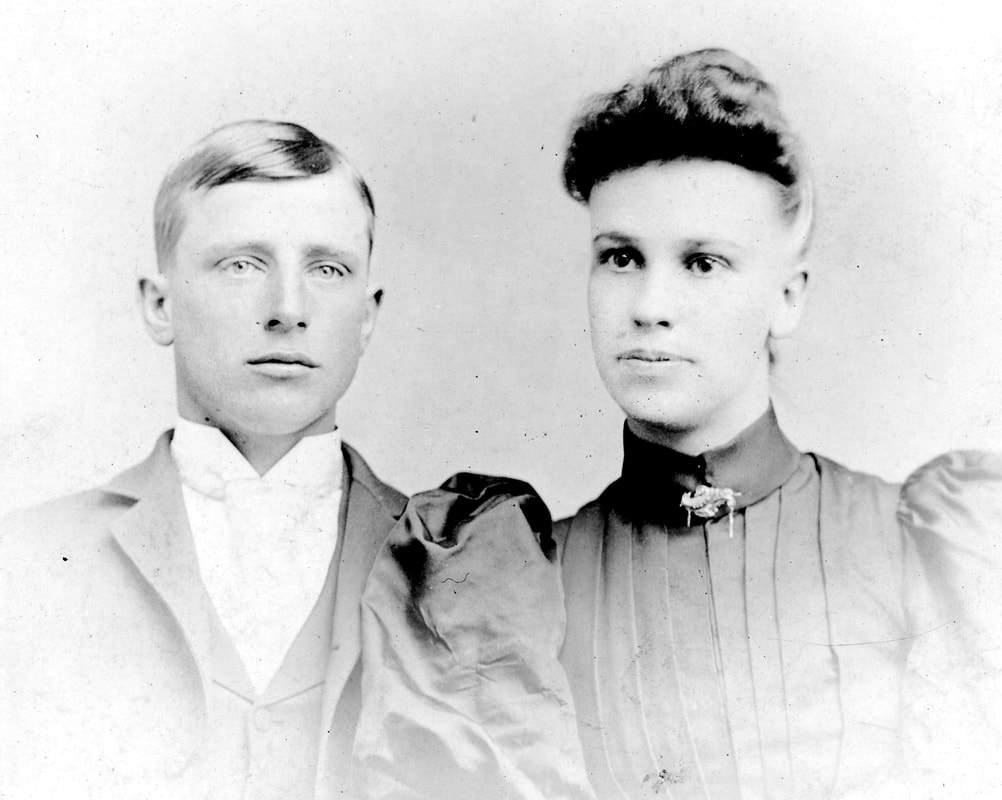 Photo 3929, Murray Herrick with wife Mary Jones, probably a wedding portrait. Mary was the daughter of Welsh immigrants John and Ellen Jones. Her parents met when they lived in Carbondale, Illinois. Her father father came to Table Rock in 1858 to make a new home for them, and went back for Mary in 1860, and they married and took up their home. Mary was about the fourth child, born in 1873.
Murray and Mary Elizabeth Herrick had three daughters, Edna Herrick Woods (1898-1994), Mildred Herrick Mehlin (1900-1994), and Bernice Herrick Wadlow, who moved to California.
Table Rock Argus, Feb. 15, 1962.

Funeral services were held this Thursday afternoon for William M. Herrick, who passed away at the Pawnee County Memorial Hospital on Monday, where he had been a patient for the past few weeks.

Final rites were held from the Christian church in Table Rock with the Rev. Allen Burnham officiating.

Mr. Herrick had been a resident of Table Rock since 1922, following retirement from the farm northwest of town. He died at the age of 92, the oldest resident of this community. Pallbearers were Howard Herrick, Lyle Herrick, Wayne Covault, Delmar Covault, Murray Mutter, and Charles Phillips. Singers at the services were Mrs. Pearl Diehm and Mrs. Robert Freeman, with Mrs. C. W. Covault as pianist. Interment was made in the Table Rock cemetery.

William Murray Herrick, son of William D. and Mary West Herrick, was born in Woodford county, Illinois, December 19, 1869. He departed this from this life at the Pawnee County Memorial Hospital February 12, 1962, at the age of 92 years.

When two years old, he and his parents and older sister, Minnie, moved to Nebraska. They settled on a farm in the Clear Creek community. There he grew to manhood. He received his education in the rural school of that community.

He was preceded in death by his parents, his wife, Mary; two sisters, Bessie Covault and Minnie Asher; two brothers, Walter and John.

Mrs. Lola Phillips, 97, passed away Monday, May 4, 1970 at the Colonial Acres Nursing Home in Humboldt.

Memorial services were held on Thursday May 7th at 2 p.m. at the Church of Christ in Table Rock with Larry Fiscus, minister of the church, officiating.

Lola Alice Herrick was born on August 15, 1872 to William and Mary Herrick in Pawnee county. She attended Clear Creek school.

She was baptized at an early age and was a charter member of the Church of Christ. She was married to Winfield Scott Phillips on November 4, 1891. To this union was born a son, Charles. She also reared a foster-daughter, Eleanor Keenan, and three grandchildren. Mr. Phillips passed away in 1941.

Besides her husband she was preceded iin death by her foster-daughter, a granddaughter, Mrs. D. E. Kenner, two sisters and three brothers.

The child is buried in Clear Creek Cemetery. 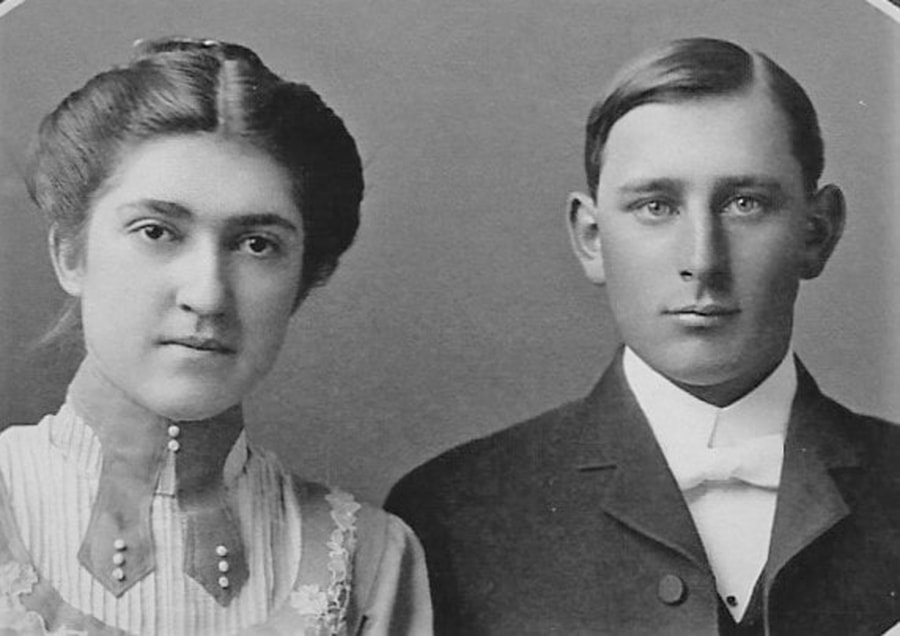 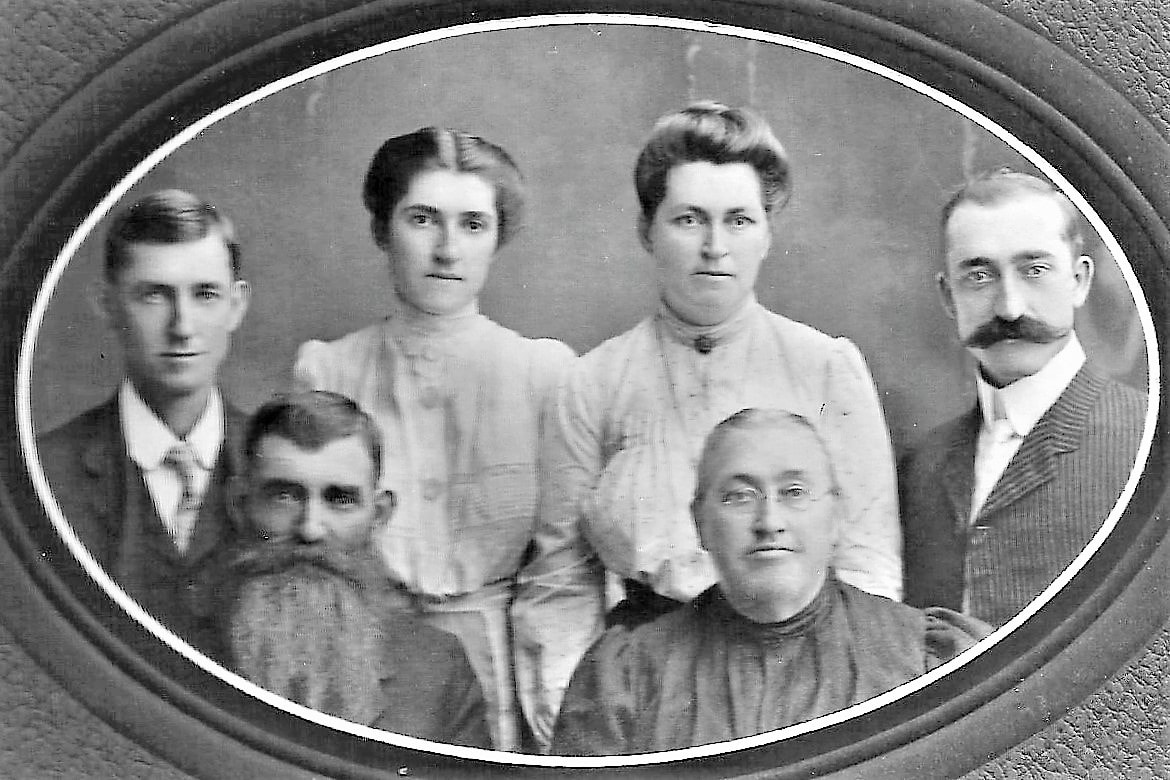 His mother, Mary A. Herrick, died September 4, 1901 and his father, William D., died November 2, 1902. His two sisters, Lavina, and a sister unnamed and one brother, Walter, preceded him in death.

After the death of his parents, he and his sister, Bessie, lived together on the Herrick farm until the time of his marriage.

He was married to Addie L. Harter February 18, 1903 and took his wife to the old Herrick farm where they lived for six years. Then they moved to the present home where he spent the remainder of his life.

He was baptized into the Christian church in Table Rock, January 9, 1928, while Rev. Pardee was minister here.

He is survived by his widow and children, Gladys B. Anderson and husband, Orvel, Howard L., Ural L. and E. Lyle. One son, Glen E. preceded him in death at the age of 21 years.

Mr. Herrick is also mourned by one brother, Murray, and three sisters, Minnie Asher, Lola Phillips and Bessie Covault, also several nieces and nephews, all of the Table Rock vicinity. His relatives and many friends mourn his passing.

Funeral services were held at the home Wednesday afternoon at 2:30, conducted by Rev. E. M. Pardee of Lincoln. Music was furnished by a male quartette of Table Rock and Mrs. R. A. Kovanda of Elk Creek. He was laid to rest by the side of his son, Glen in the table Rock cemetery.

Out of town relatives attending the funeral were Mr. and Mrs. E. C. Harter and Mr. and Mrs. O. C. Blauer all of Bern, Kansas, and Mrs. Ida Watts of North Platte.

John and Addie's children, Ural, Howard, Gladys, and Glenn. Ural married a Bentzinger.  Howard married and had children Lonnie and Nancy. Gladys married and had son Gerald Anderson. Glenn died in 1925 at the age of 21; he had not married. 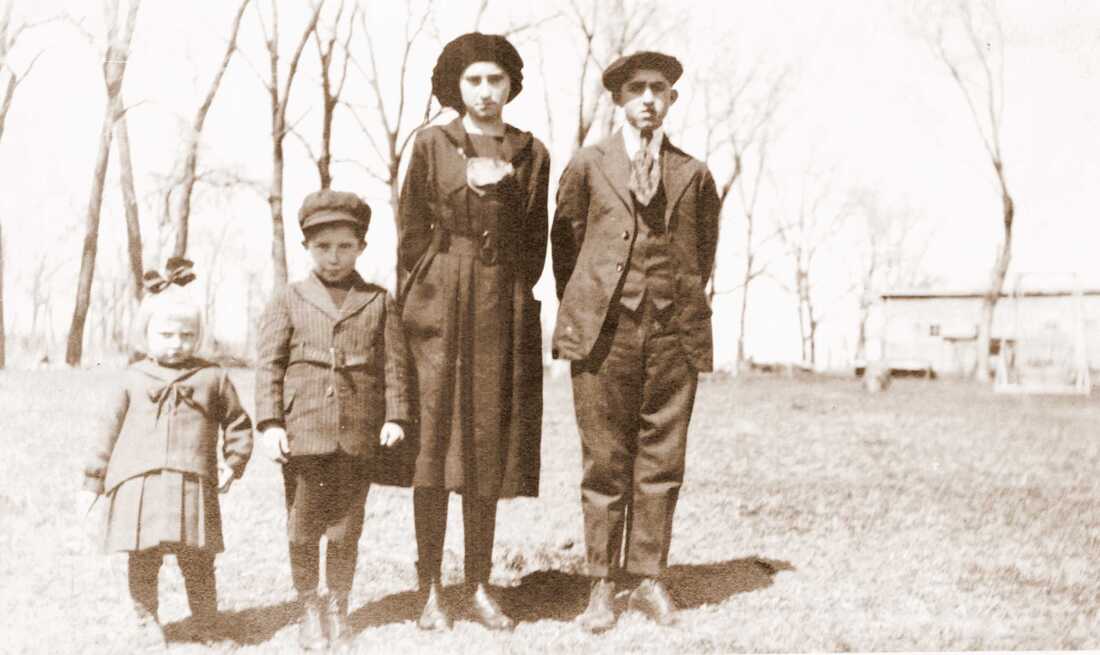 Glen Edwin Herrick was born in Clear Creek Precinct, Pawnee County, Nebraska, August 18, 1903, and died in Table Rock, February 3, 1925, at the age of 21 years, 5 months and 16 days. He was born on a farm, known as the "old Herrick farm", seven miles northwest of Table Rock, where his father was also born and reared to manhood.

At the age of five years he moved with his parents to their present home, where he has since resided.

He attended school at Clear Creek until he had finished eighth grade, then came to town and entered the High School, from which he graduated in May 1921. Since that time he has farmed with his father. He was a member of the M.W.A.

He was operated on January 24, for appendicitis and grew gradually worse until death came.

He was very patient during his illness, although suffering greatly, he never complained and passed away very peacefully.

He was a very loyal son and brother, loving his home and his family above all else.

He leaves to mourn their loss, his parents, two brothers and two sisters, all of whom he was very fond.

A loving one from us has gone,
The voice we loved is still;
An aching void is in our hearts,
This world can never fill.

There were many beautiful floral tributes, expressing the love and high esteem in which Glen was held, by all who knew him.

Interment was made in the Table Rock cemetery. The sympathy of the entire community goes out to the grief stricken family. 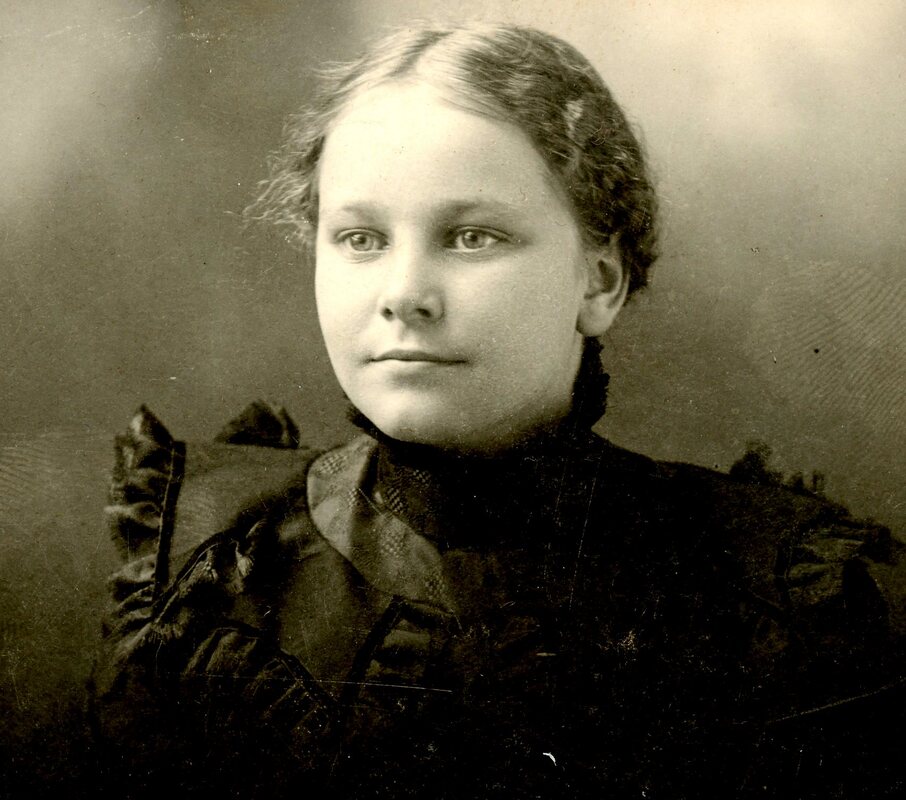 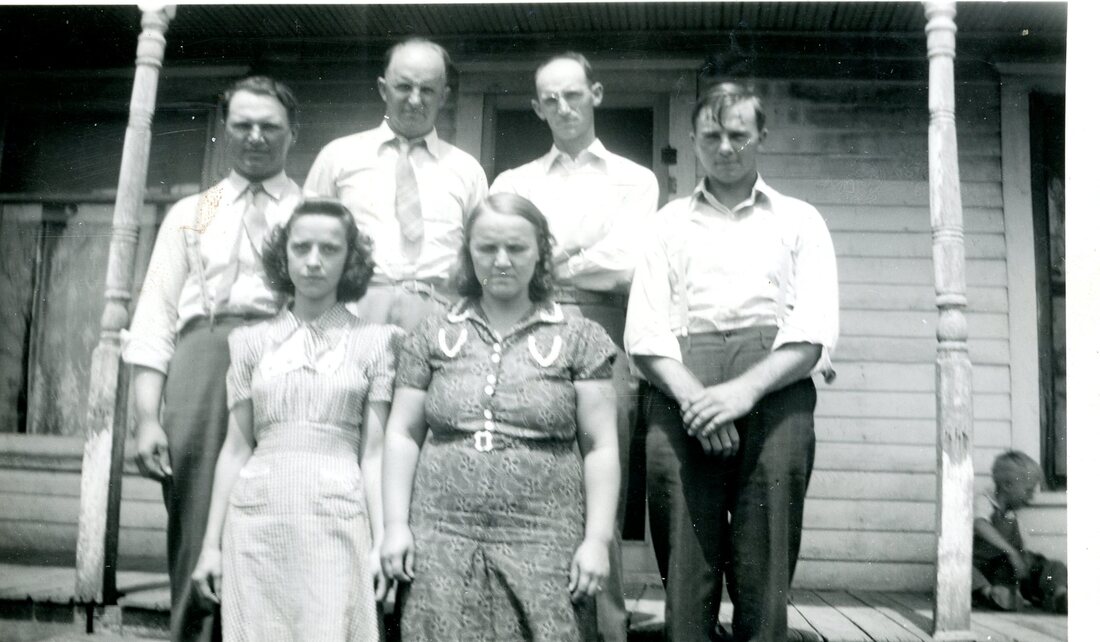 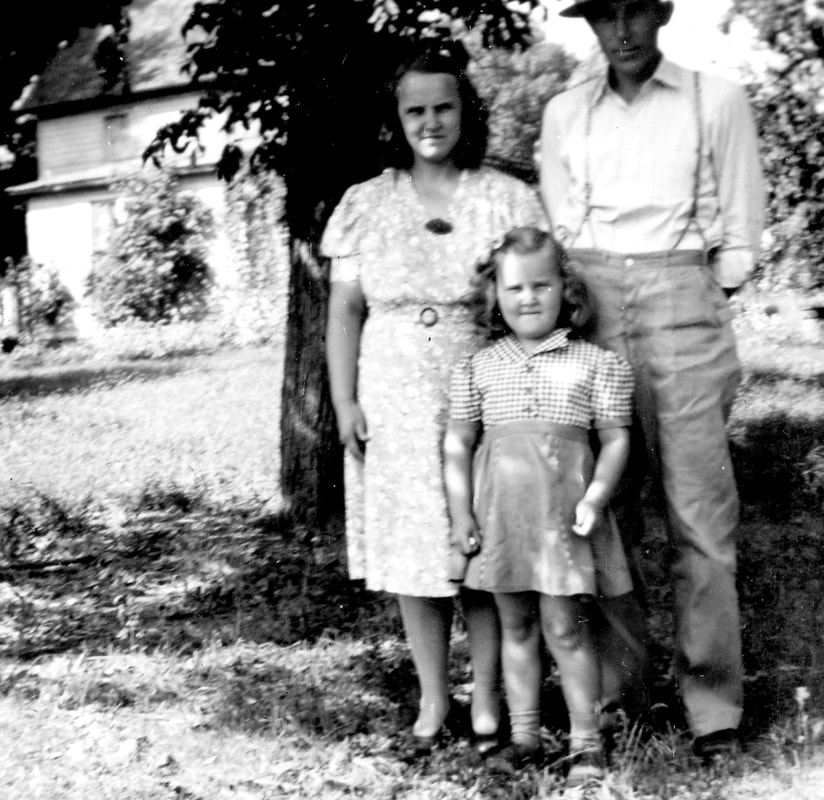 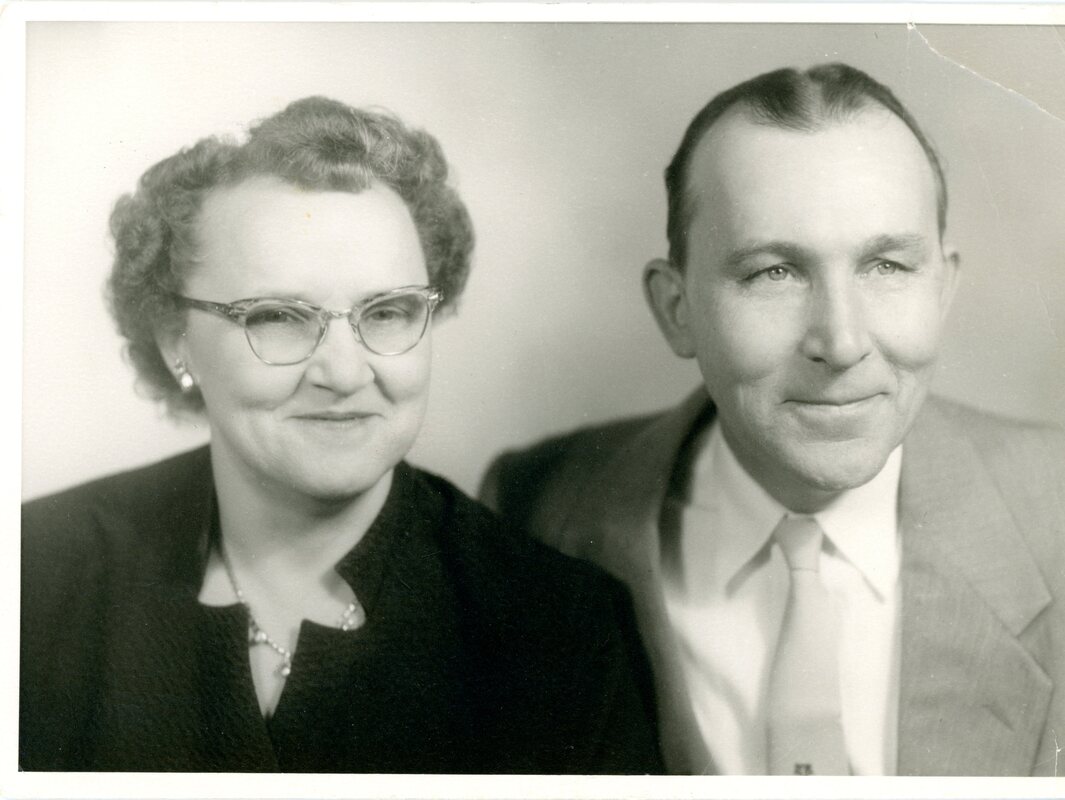 Photo 3930, shared by Brad Bowen
In 1976, Veda Herrick Howell with sister Lillian's mother-in-law Cecil Heer Bowen, in Veda & Howard's apartment in the hotel at the southeast corner of the Square 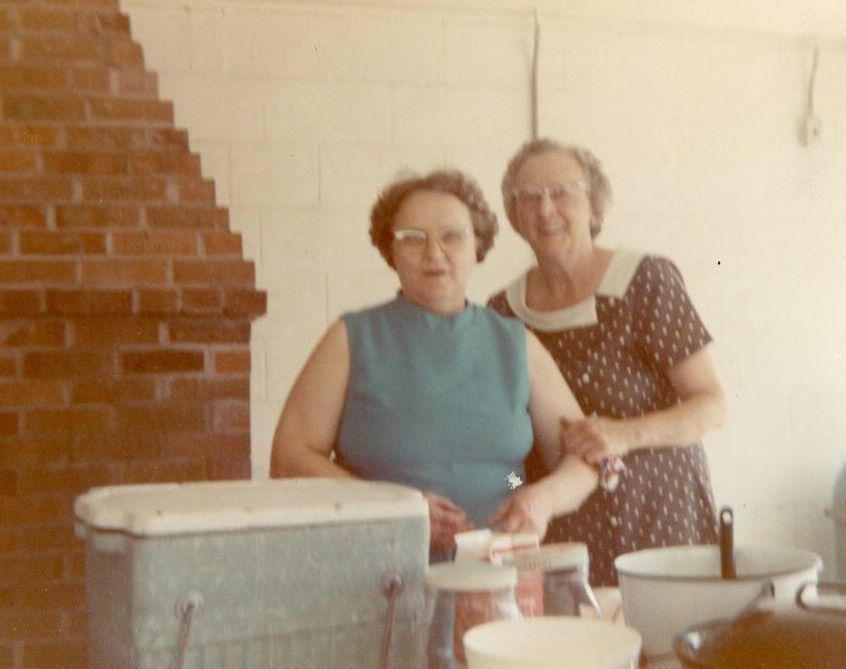 Lillian Bessie Herrick, youngest daughter of William D. and Mary Herrick, was born February 22, 1886 on a farm in the Clear Creek community. At the age of fifteen, her mother died and she lived with her sister, Lola.

Here she grew to womanhood. On January 10, 1906, she was united in marriage with John A. Covault of Table Rock. They made their home on a farm near here.

To this union were born six children. About three years ago her health began to fail. All that medical skill and loving care could do in her behalf was bestowed upon her.

Leaving to grieve this loss are her husband at home, two daughters, Mrs. Lillian Giles, at home, and Mrs. Veda Howell of Table Rock; four sons, Lloyd, on a farm near the home place, Richard of David City, Wayne at home and Delmar, also farming near the home place; also 8 grandchildren; one brother, Murray Herrick, and one sister, Mrs. Lola Phillips, both of Table Rock, and several nieces and nephews. Many close friends who have known her through the years, also mourn her passing.

Mrs. Covault was a deeply spiritual woman and had been a faithful member of the Christian Church in Table Rock since early girlhood.

All through the years she and her family were always found in their accustomed places at all services of the church. Hers was a beautiful life dedicated to righteous purpose and service to others.

"And God shall wipe away all tears, and there shall be no more death, neither sorrow, nor crying; neither shall there be any more pain for the former things are passed away."
View My Stats