Here are some fun things for our Deubelbeiss friends!  I wish I had a picture of Cleo Deubelbeiss.
John and Katharina had five children, including Margaret and John.   John and his wife Cleo (Aylor) had one daughter, Kathy Ann.

The photo is undated, but is in a bound album that appears to be a photographer's display album, probably of Archer King; in that album is a class play picture in which the date of the play was on a plaque in the picture - 1910.  So this picture is circa 1910.

There is a handwritten list of names, but it is difficult to reconcile them with the individuals in the photograph, but below this picture you will find an  attempt to do so. 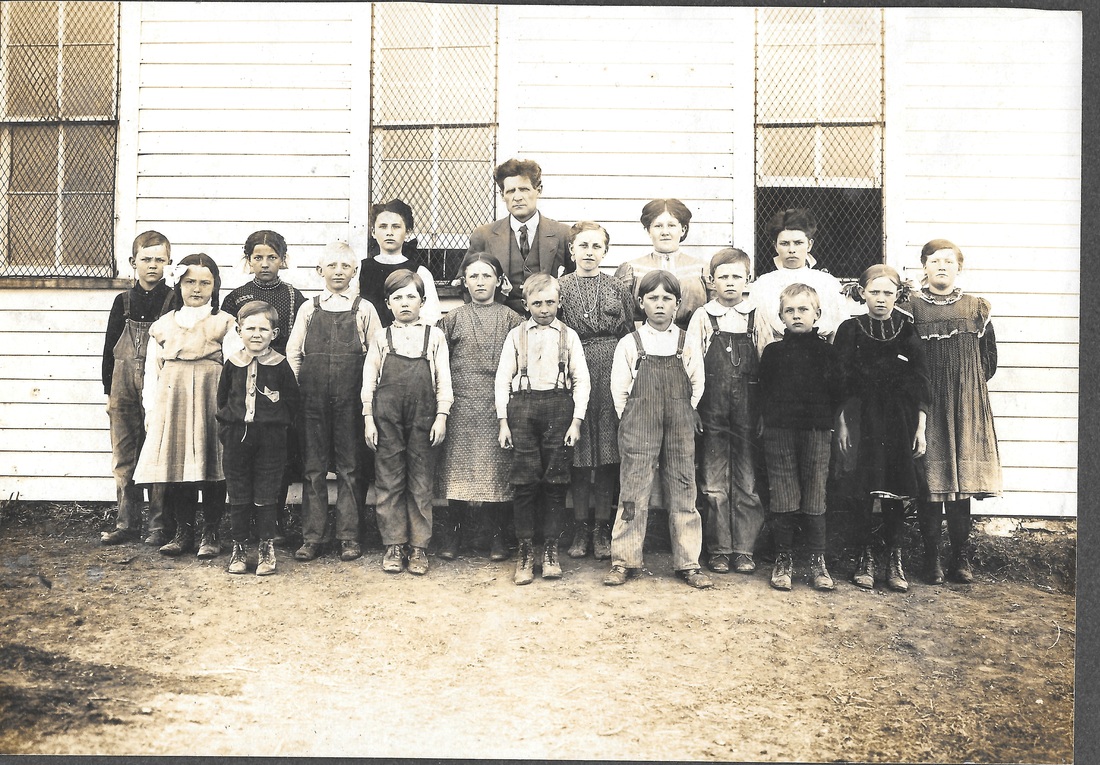 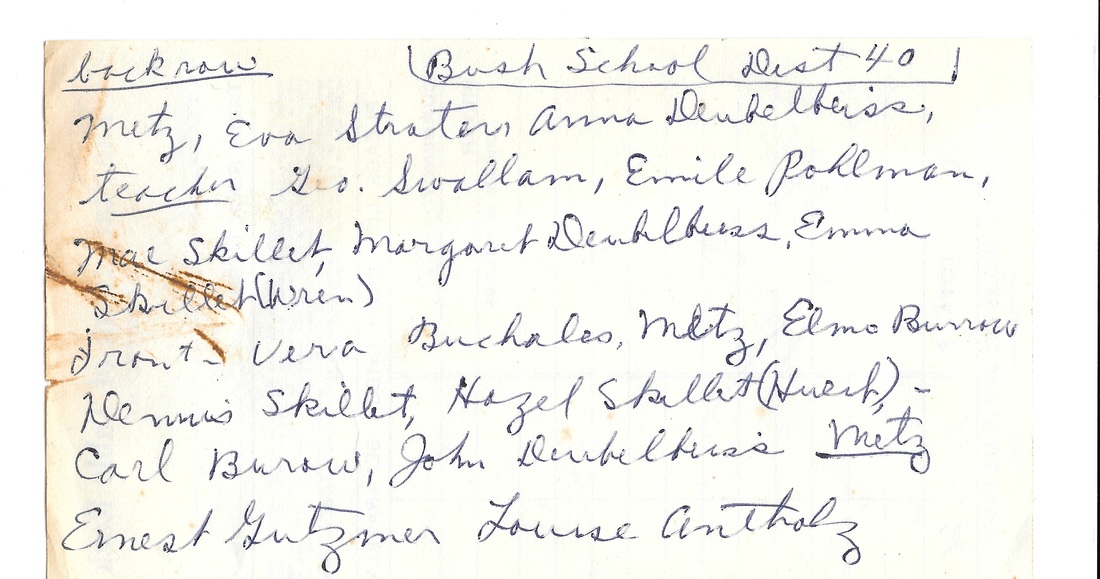 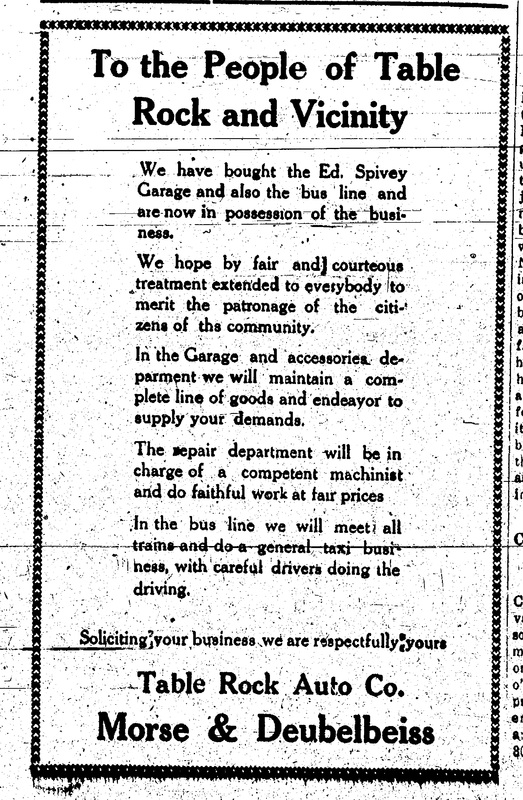 Table Rock Auto -- Morse & Deubelbeiss, "Let us minister to your car necessities."    "Taxi allhours, all ways, all trains."  Now with an "oil and gas station."  Phone number?  Why 57, of course! 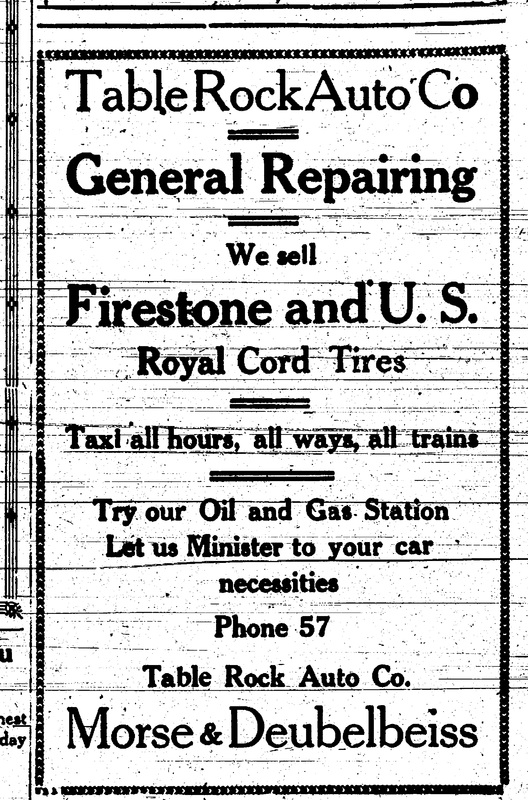 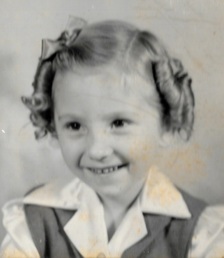 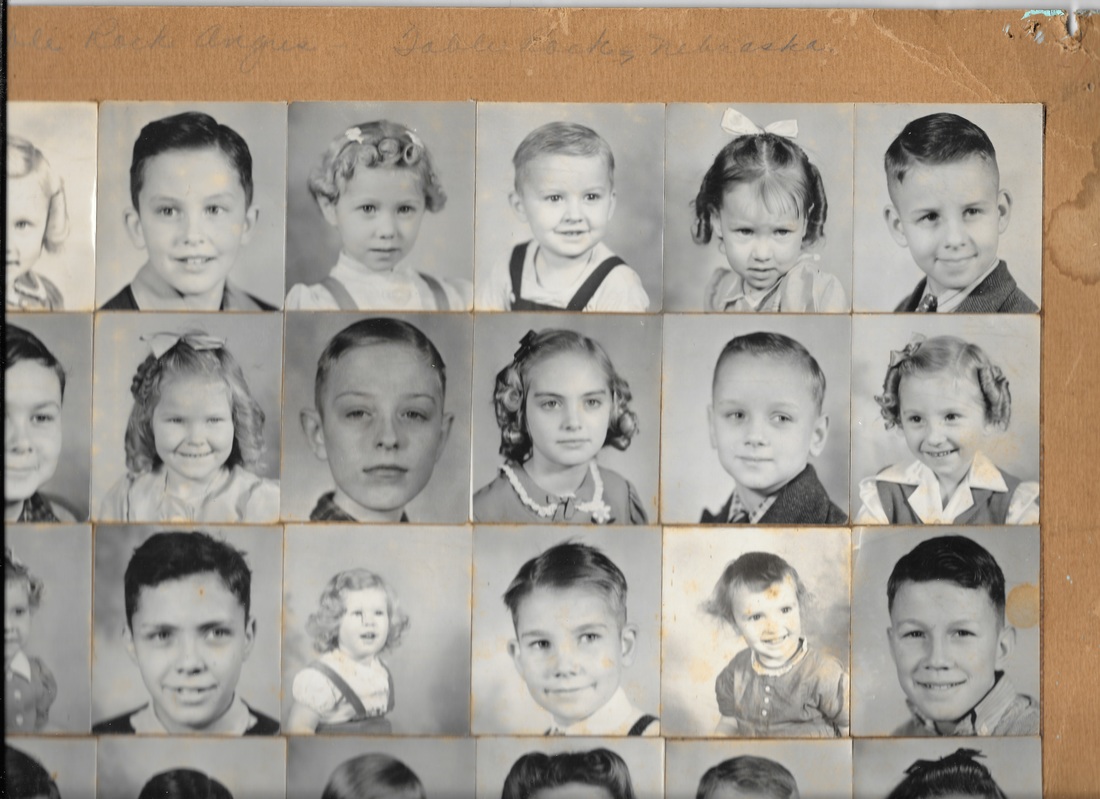 The picture of Kathy Ann Deubelbeiss is one of many mounted on a board. It appears to be an entry by the Table Rock Argus in a contest. All of the photographs are identified, but two of the Tomek brothers are apparently misidentified. Apparently that is Milan Tomek above her and George Tomek to her left, although one of them is identified as Edward Tomek.

Cleo & John Deubelbeiss open a grocery store. Call 2201 for free delivery!  And enter the contest to name the store 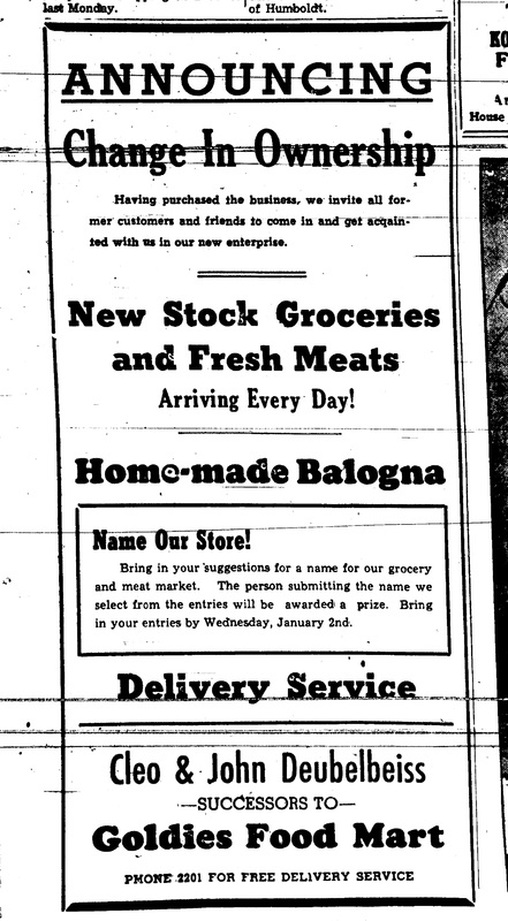 John Deubelbeiss was born May 11, 1900 and passed away at the Clarkson Hospital in Omaha, Nebr., Sept. 29, 1983 at the age of 83. John was the youngest of five children born to John and Katherine Mueller Deubelbeiss on a farm south of Humboldt, Nebr., Richardson County.

In 1910 the family moved to a farm northeast of ?Table Rock, Ne. John attended country school in Richardson and Pawnee County.

In 1920 they moved to an acreage west of Table Rock where he lived with his parents until married.

On December 26, 1928 he was united in marriage to Cleo Aylor. To this union , one daughter, Katy Ann was born.

John was employed thoughout his life in the Table Rock vicinity, working for the C.J. Wood garage, Karas garage, Farmer's Co-op and retired in 1974 after working 36 years for Pawnee County.

During his retirement he kept busy working in his shop and doing little jobs for friends and relatives. He was always willing to lend a helping hand when needed.

He is survived by his wife, Cleo, of the home, daughter Kathy, and son-in-law Marshall Jurgens, granddaughter, Elizabeth and grandson, David; one sister, Margaret Clark and a legion of friends. He was preceded in death by his parents, one brother and two sisters.

We feel our lives have been richly blessed by Dad's presence in our lives for he was a loving and devoted husband, father and grandfather. He will be missed by his family ad friends.

Interment was in the Table Rock Cemetery, Table Rock, Nebraska
John Deubelbeiss's obituary mentions the Table Rock businesses where he worked before a long career with the County.   Here is a 1920 ad for the Farmer's Union, one of those businesses.  When did John work there?  He was 20 when this ad came out. 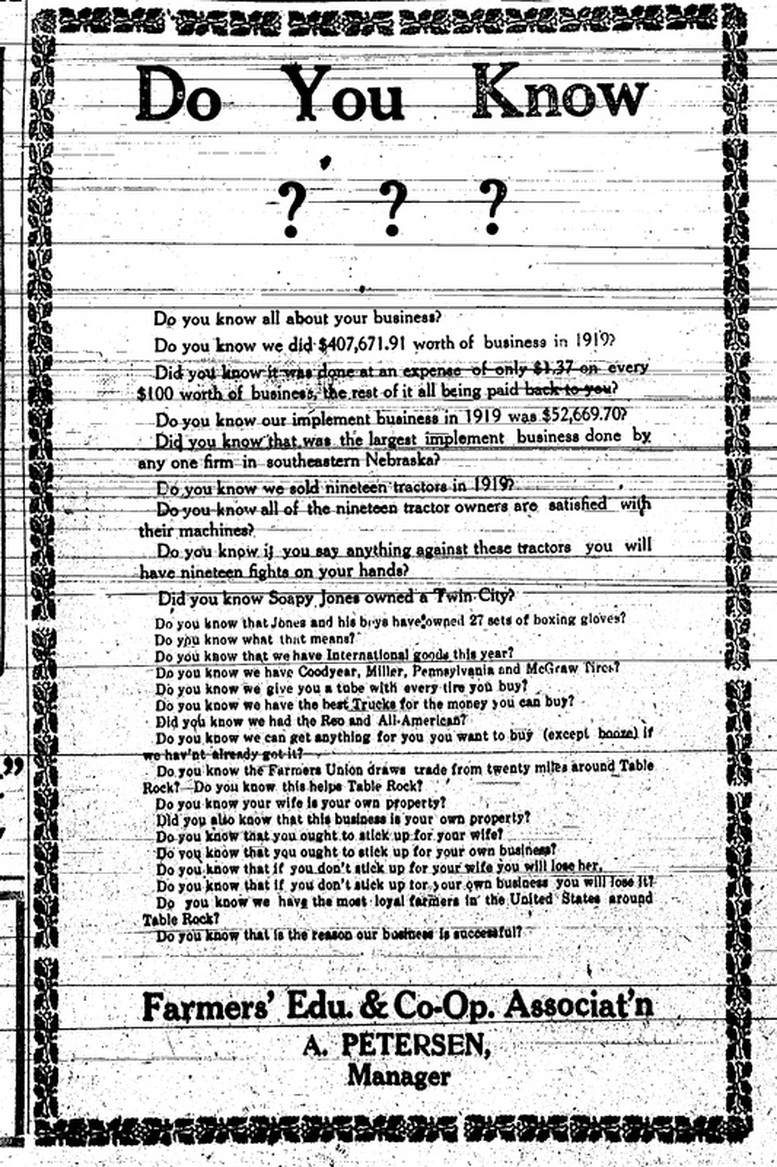 Here's a 1922 ad for C.J. Wood garage, another business where John worked.  When did John, born in 1900, work there?  Was he one of the "good mechanics" they advertised? 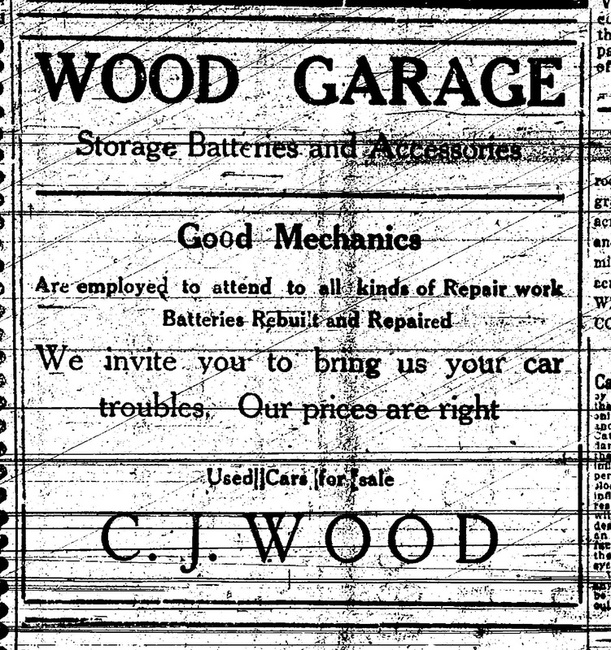 John worked at the Karas Garage. When?  In 1927, the garage was at the back of the hotel "block," i.e., the hotel, theater, and retail store. 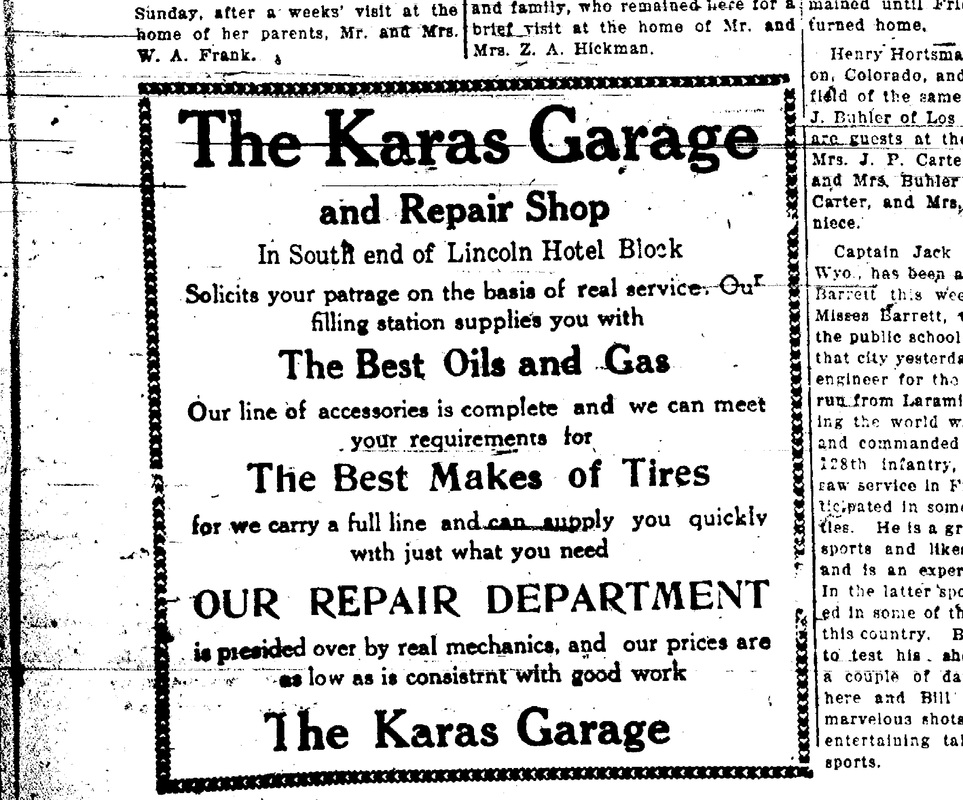