GLENDA'S FAMILY PICTURES ARE BELOW.

BUT 1ST HERE ARE SOME tHAT SHE BOUGHT AT A LOCAL GARAGE SALE YEARS AGO.
do you know who they are? SHE WOULD LIKE TO give THEM TO A FAMILY MEMBER. 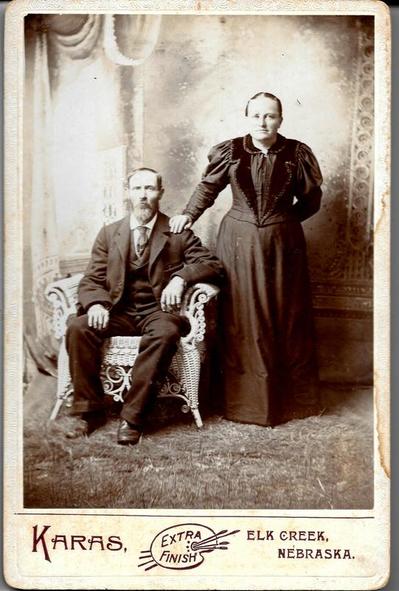 Unidentified. Photo 3602
This one was posted as unidentified.  However, in April 2019, Fran Blecha recognized it!  Meet Frantisek & Rosalie (Fidermuc) Horalek! 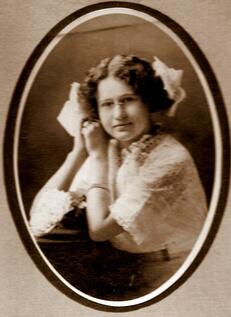 Labeled Blanche Hubka.
This one was posted as unidentified, but it has been tentatively identified now..

In July 2017, genealogist Linda James said that a Blanche Hubka is in her line, and married Ivan Skalak.  She will go through her materials and see whether this photograph might be her Blanche Hubka.

In April 2019, our Fran Blecha said she believes it is indeed Blanche Skala. Fran wrote, " It's identified as "Blanche Hubka". I believe it would be Blanche Viola Hubka, daughter of Joseph Michael and Mary Anna (Blecha) Hubka. Blanche married Milo Amil Skala, and is buried at Mahaska, Kansas. I found her on Findagrave at https://www.findagrave.com/memorial/46649571/blanche-viola-skala 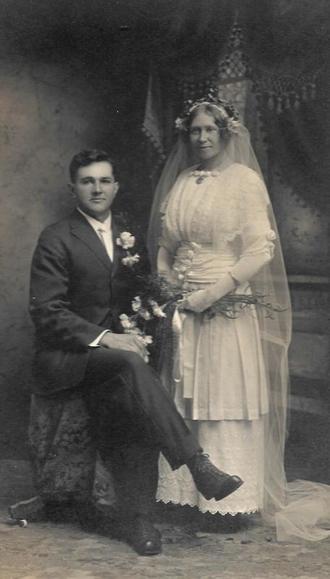 Unidentified. Photo 3604.
This one was posted as unidentified, but it has been identified.  Ray Musil brought in part of his extensive family pictures for scanning, and there it was!  The same photo, with names!  Meet Louis Voutrobek & Lillian Yoble!  It is also Photo 7650, with Ray's collection.

This first one is a wedding picture, as can be ascertained by the young man in the center back holding a buggy whip; as Historical Society member Bob Blecha has explained in showing one of his family photos from this era, the driver of the wedding buggy/carriage was a place of honor in the wedding party.  Brides were not necessarily wearing white in those days, but the couple fo the right are probably the bride and groom, leaving the couple on the left as the maid/matron of honor and best man.  This is all guessing but maybe it will get someone to thinking. 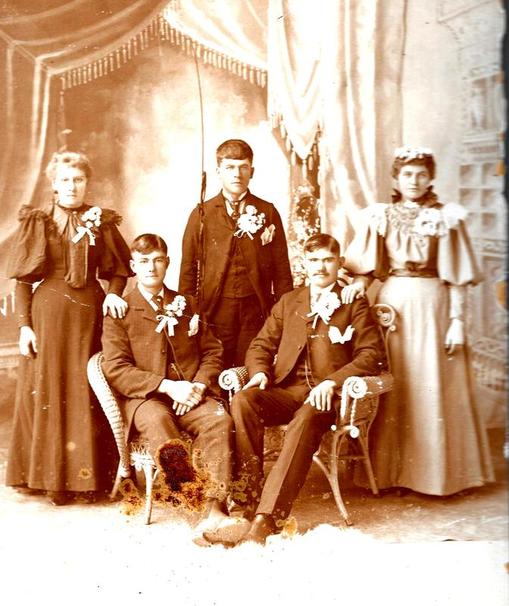 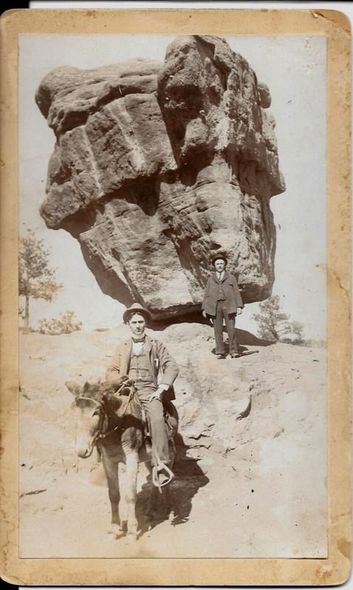 Labeled Emil Welkey and friend. It may be in Colorado. It's not in Table Rock. Photo 3601.

This is a photocopy of a photo. An image of the photocopy with dates of birth and death annotated on it is below. 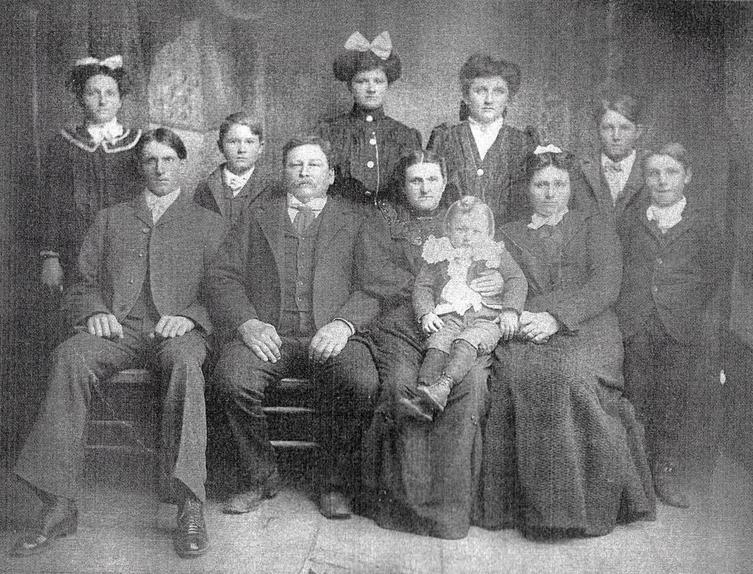 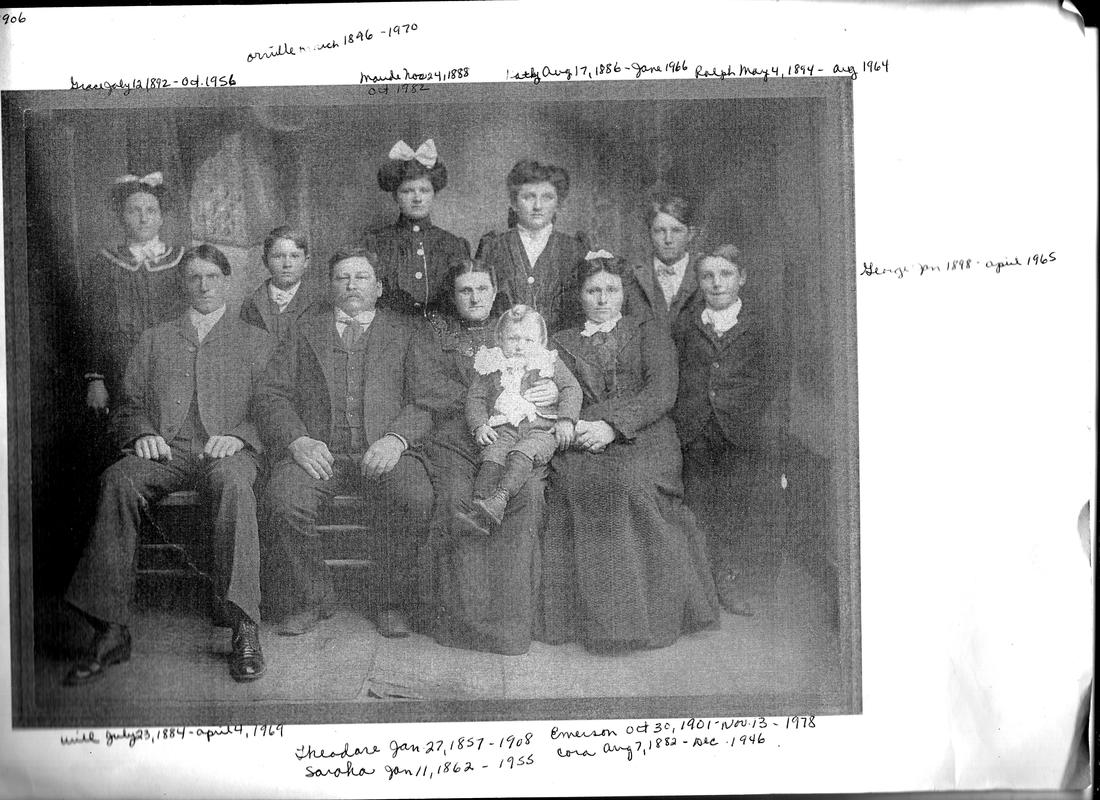 The Alderman family again.  Names are annotated on the album page that Glenda has and that page is after this picture. 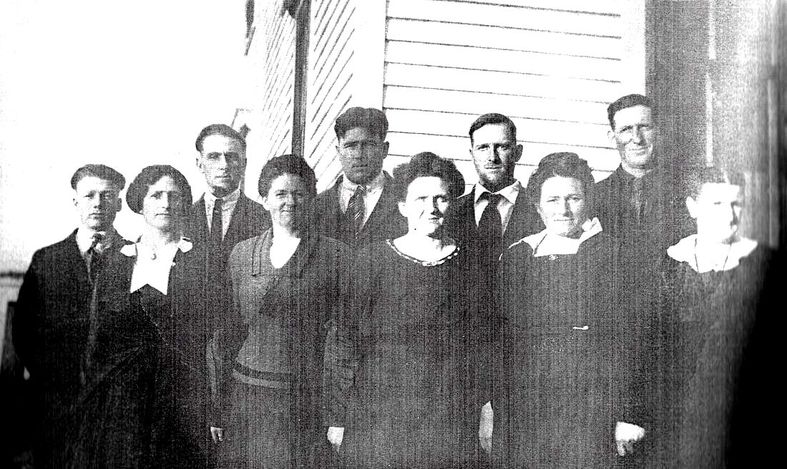 Glenda identifies her Grandma Alderman as the older woman in the front row, far right.

The names as they appear to be annotated in the margins above and below the photo: 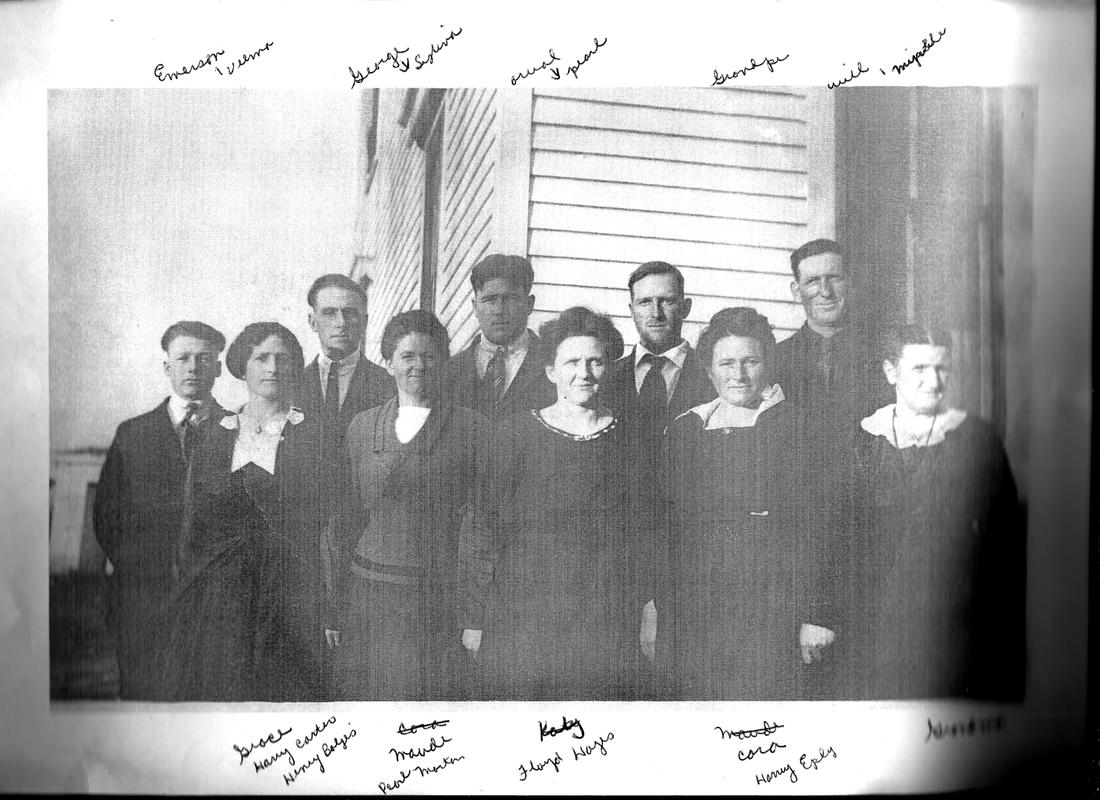 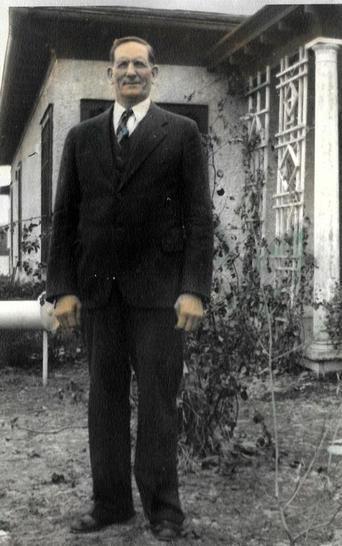 Will Alderman in front of his home in Table Rock. Photo 3605. 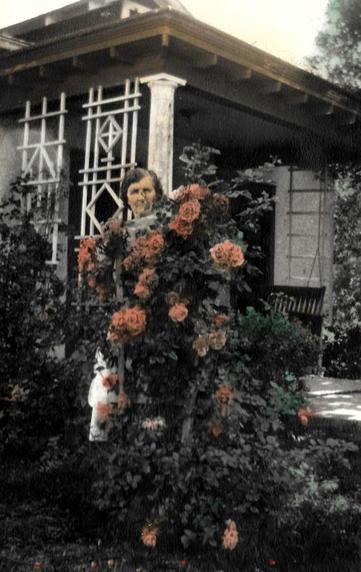 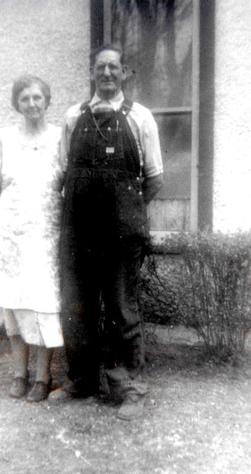 Myrtle and Will Alderman. Photo 3607.

at "the rocks" east of town (goat hill) 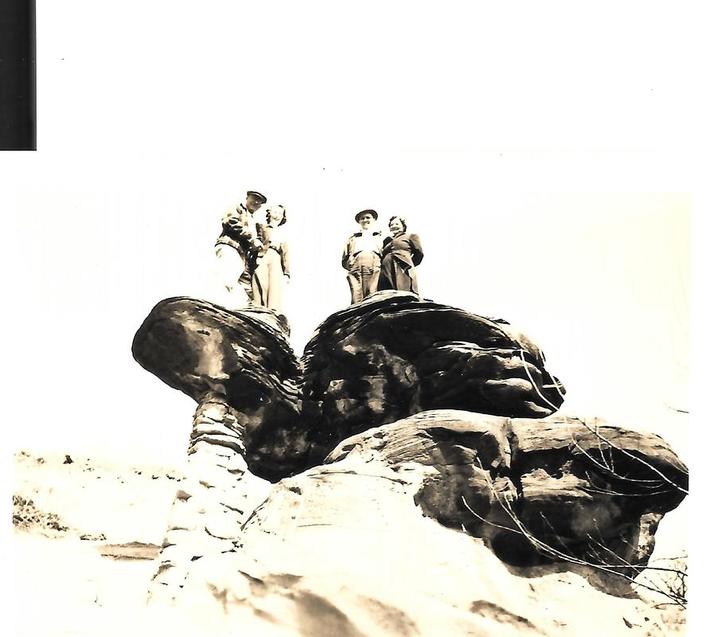 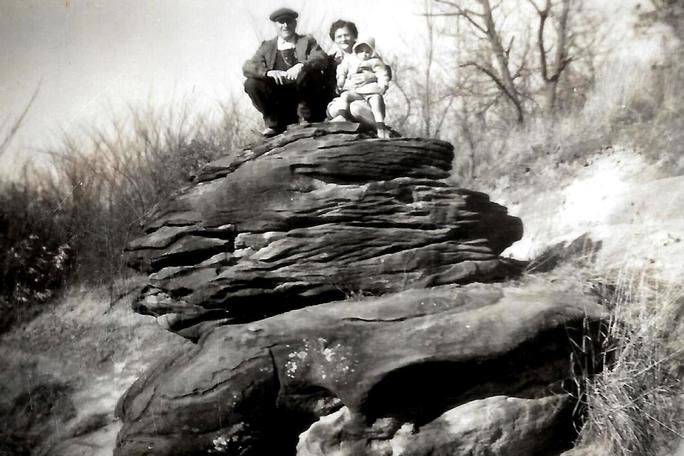 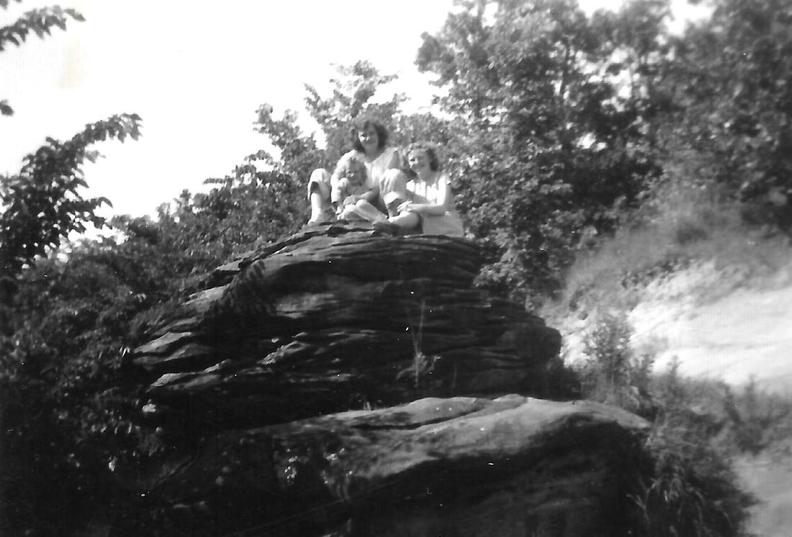 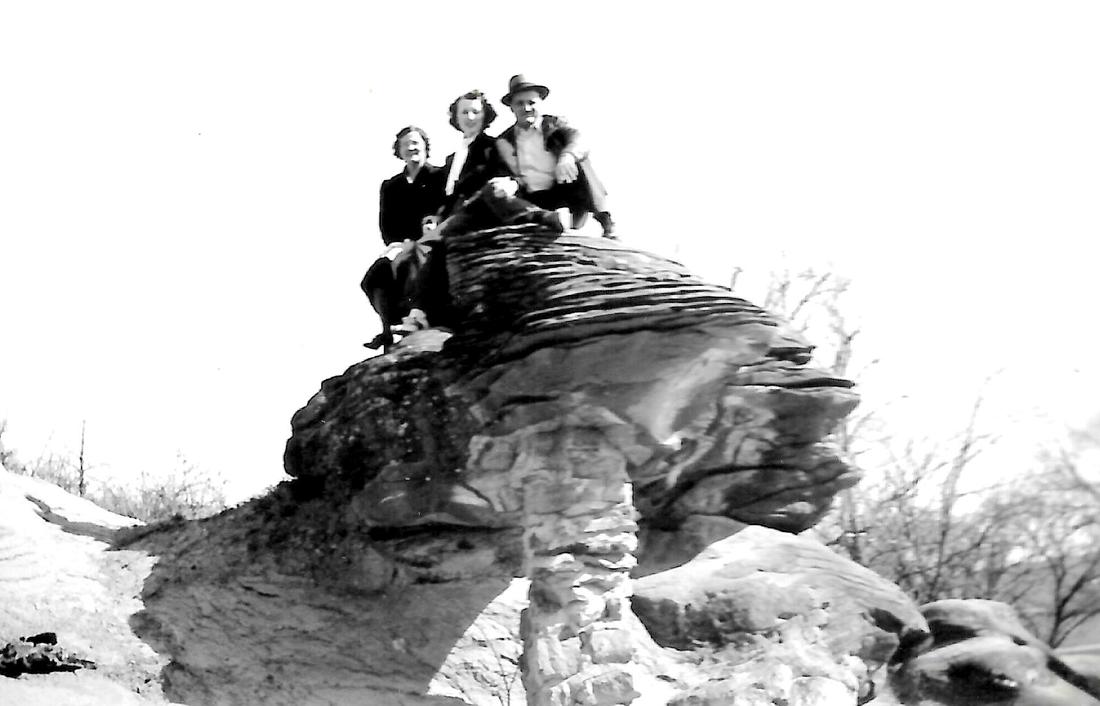 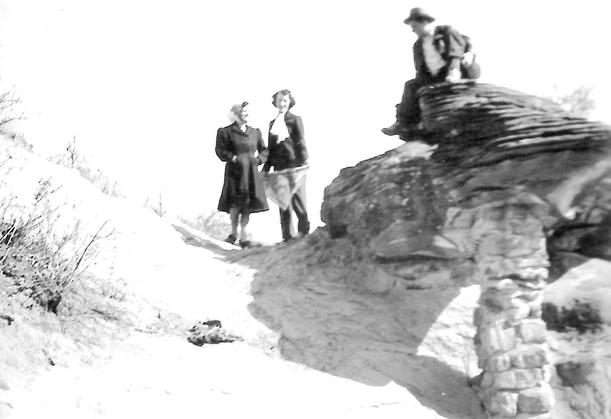 Glenda has a variety of school pictures that were passed on to her. They are obviously from Table Rock except for two.  They gave no names or clues, other than one in which the students are holding a sign saying "Seniors 1938," which turns out to be the Class of 1939!

Glenda and her dad, Art Alderman, Class of 1945, looked over the photos and recognized a few people, as did Willard Binder, also in the Class of 1945.  Some of the students like Arvid Blecha, Norma Wopata, and Lois Mae Binder, are recognizable and the alumni records list those three as in the Class of 1939.

We know this one is the graduating class of 1938!  Wouldn't you think?  But no!  That is definitely Arvid Blecha in the back, fourth from the left, and Norma Wopata Binder in the middle row, far right. They both graduated in 1939.  They would have been seniors in 1938, at the beginning of the school year.   So this would be the seniors who would graduate in 1939, but in the first half of their senior, in1938.

Below this photo are the names of the students in the  classes of 1938 and 1939 so you can compare for yourself. 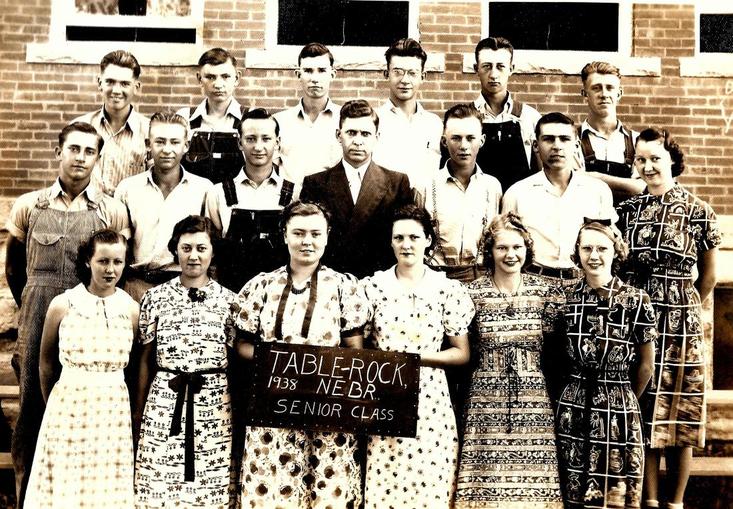 Norma Wopata and Arvid Blecha are readily recognizable, back row, 3rd and 4th from the left.  That looks like Lois Mae Binder in the bottom row, third from the right.  Those three all graduated in 1939.    Thus, it seems that this photo includes students who would graduate in 1939, but prior to their last school year.

Note: This picture has four more students than the number who graduated in 1939.   Did four students leave before the senior year?  Or is this some combination of students from that class and another? 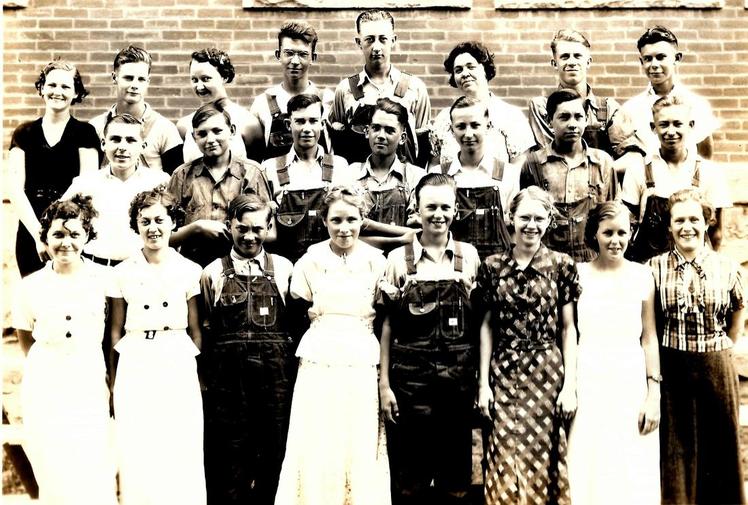 Photo 3608.
Some of the same kids again. Looks like Norma Wopata Arvid Blecha again standing next to each other, 3rd and 4th from the left, back row.   Which school year was this?  And which classes -- above or below the 39'ers? 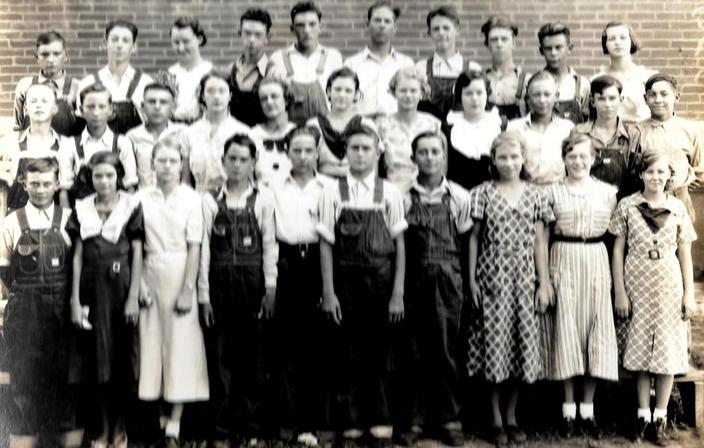 very cute, but who? 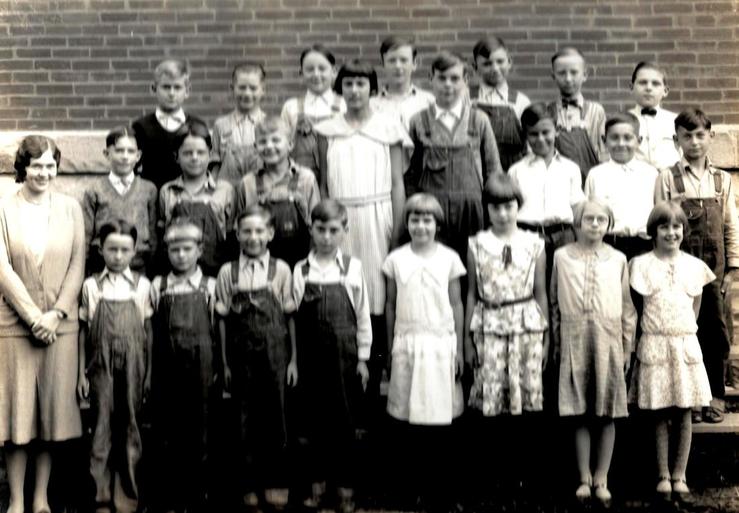 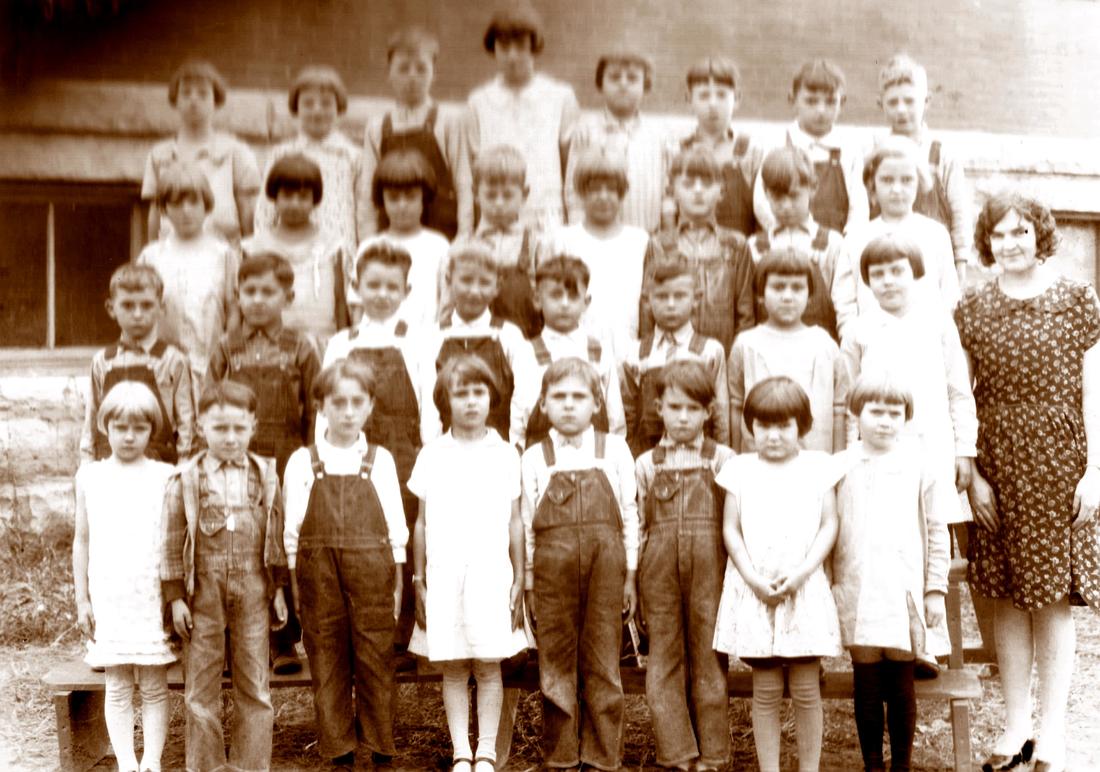 There seems to be a wide disparity in ages.  Elementary school?  This is definitely not the whole school.  Art Alderman spotted Micky (Orville) McKnight (front row second from right); he was in the Class of 1938. 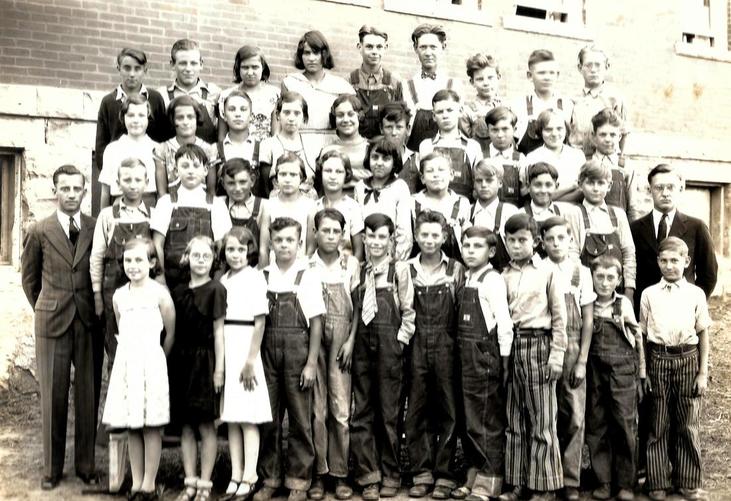 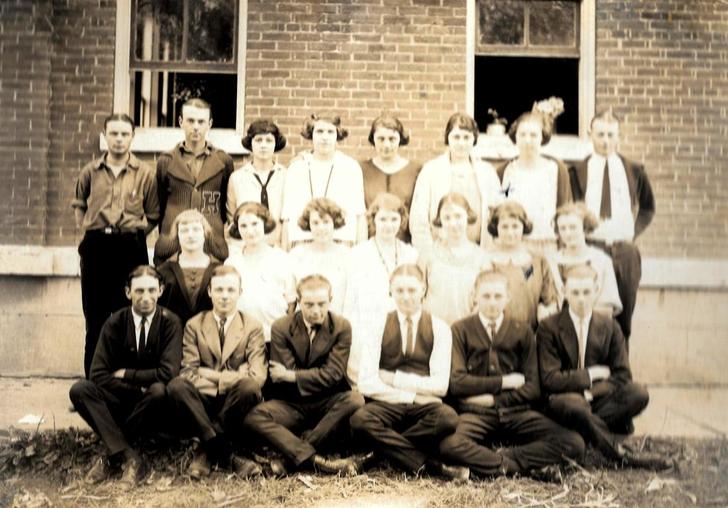 Photo 3611.
Whoever these students are, the photo was taken the same day as the one below -- the same vase of flowers is on the window sill. Is this photo from Humboldt? One young man has an "H" on his jacket, and the structure of the building appears different than Table Rock.
This photo was taken in the same place and time as the one above, Photo 3611.  Observe the vase. Why are there only young ladies in the picture? 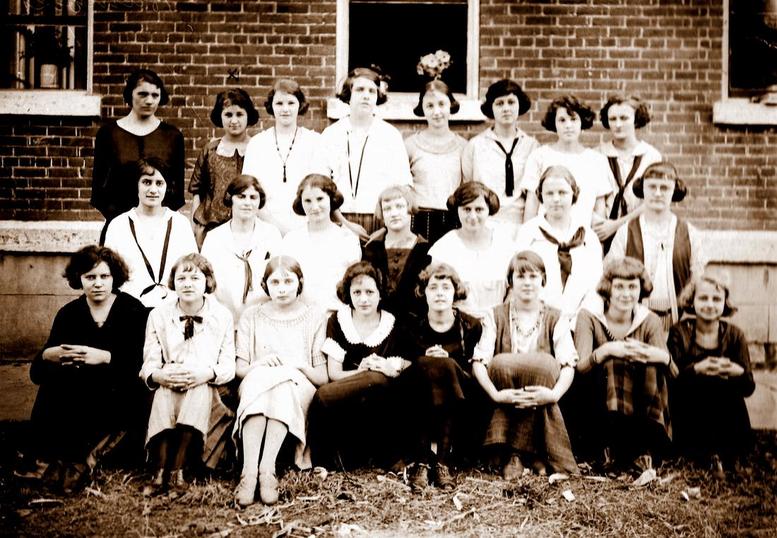