THE PHOTO COLLECTION OF GEORGE BINDER

Katie Smith's personal history is little known & some care has been taken to sort out Ancestry. records because in George's collection is a photograph of a soldier identified as Katie's father but with no first name.  Was he in the Civil War? Or earlier, in the Mexican-American War?  Or earlier yet?  Her obituary says she was born in Rushville, Schuyler County, Illinois.  There were at least four Smith families in Rushville as of 1850.  We don't know whether either of those was Katie's family.  One was the family of David & Nancy Smith, born in Kentucky, and with five children born in Illinois -- no Katie, who was born that year, but there WAS a daughter named Mary, who would have been six years older than Katie.  The father was a physician. The second was the family of Joseph & Margaret Smith. They were born in Ireland, and had four children, 3 born in Ohio and one in Illinois, and one, who would have been 5 years older than Catherine, was named Mary.  The father was a stonemason.  The third was the blended family of Marshall &  Temperance Smith; they had four children that were apparently from a prior marriage of Temperance's, and then five children together, the youngest of whom was age 2; a baby born in that year would be conceivable; one daughter would have been 14 years older than Katie & was named Mary. The fourth was the family of Hugh and Susan Smith. They had 8 children, including a three-month old baby, who was not named Catherine, so this last family is not a candidate.

As of 1860 (the year before the Civil War began), the only Catberine Smith living in Rushville was in the household of a couple by the name of Chadsley with their 20-year-old son; she was 10; a laborer, Smith Wright, lived with them also, and was 18; two years later, he enlisted, and served for 3 years.  Is this the Katie who married Isaam Bain.  If so, what happened to her family? All three of the potential families had numerous children.

In any event, Isaam & Katie Bain had been married as of 1870, appearing in a federal census in Illinois with her reported age as 18 & his as 24, and no children in their household. Their first child, Lucy, was born in 1872.

Grandma Bain presumably refers to Catherine Bain, since the rest of the photographs were of Nellie's siblings, and none were named Mary.  The name of Mary Smith has been used as a clue to finding Catherine's family.  This is the document with that information. 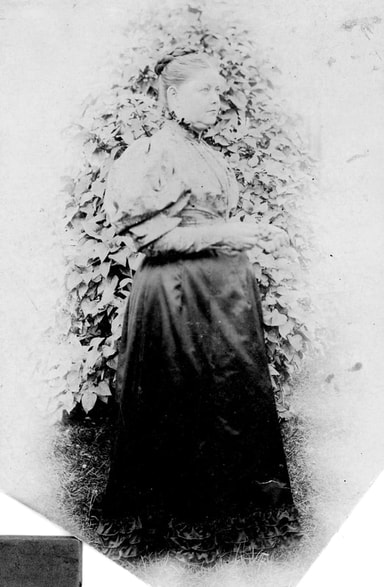 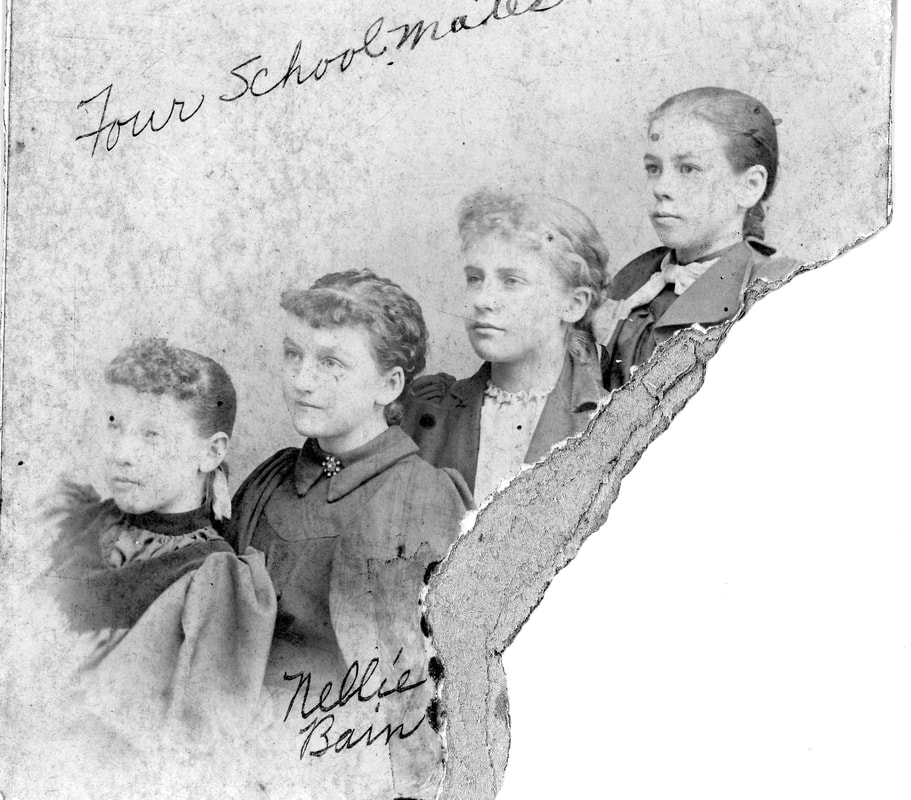 Photo 7799, Nellie Bain & schoolmates. Nellie is the only one of her siblings who is listed in the alumni record as a graduate of Table Rock. She graduated with the Class of 1900, 71 years before her grandson George, who came to have this faded picture, which must be from the 1890s. Those who made it to high school graduation were only four: Nellie, Edgar Gates, Lawrence Griffing, & Vina Shorter Nickelson. 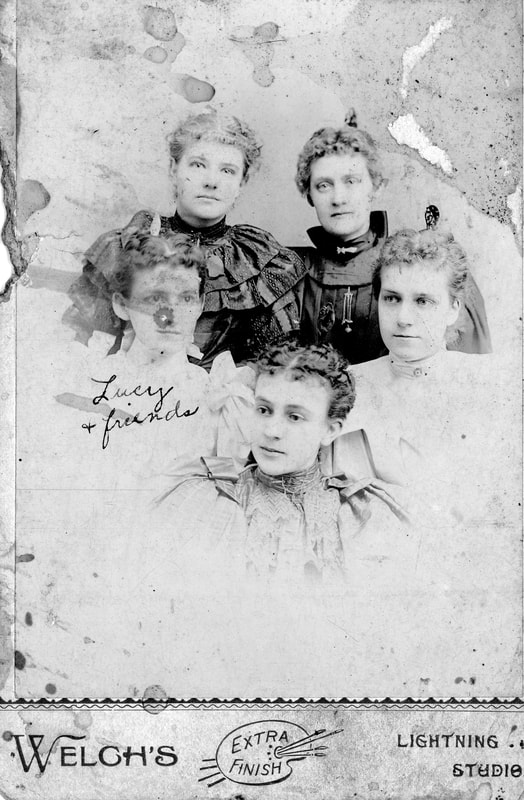 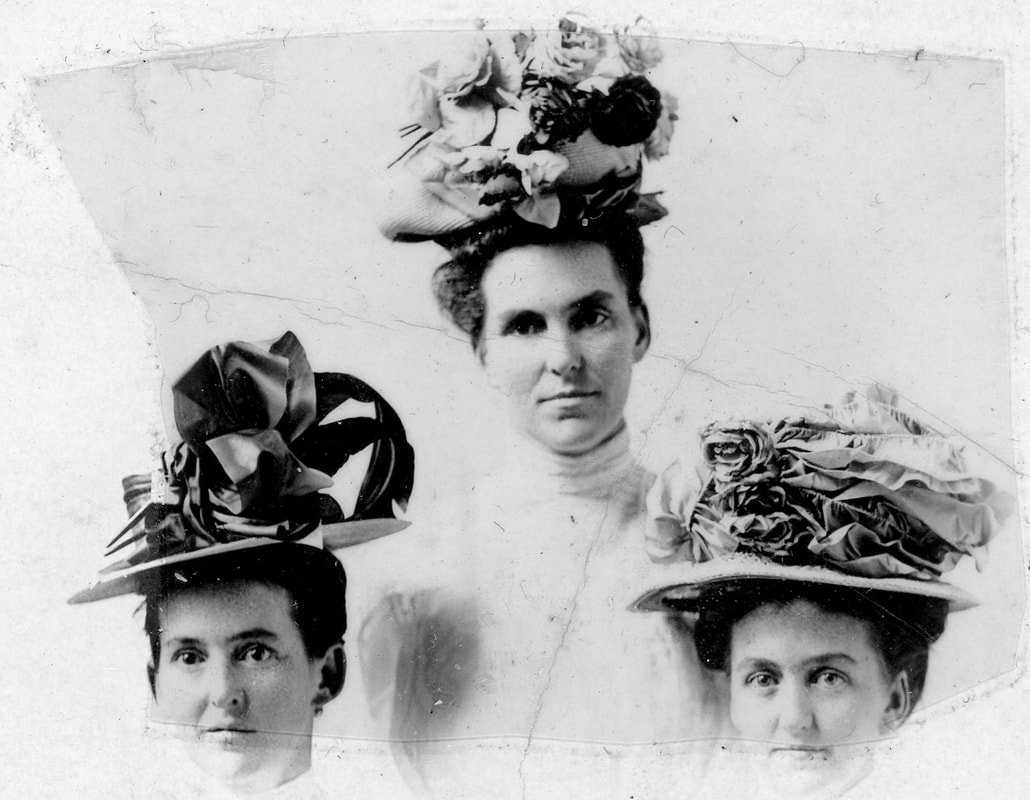 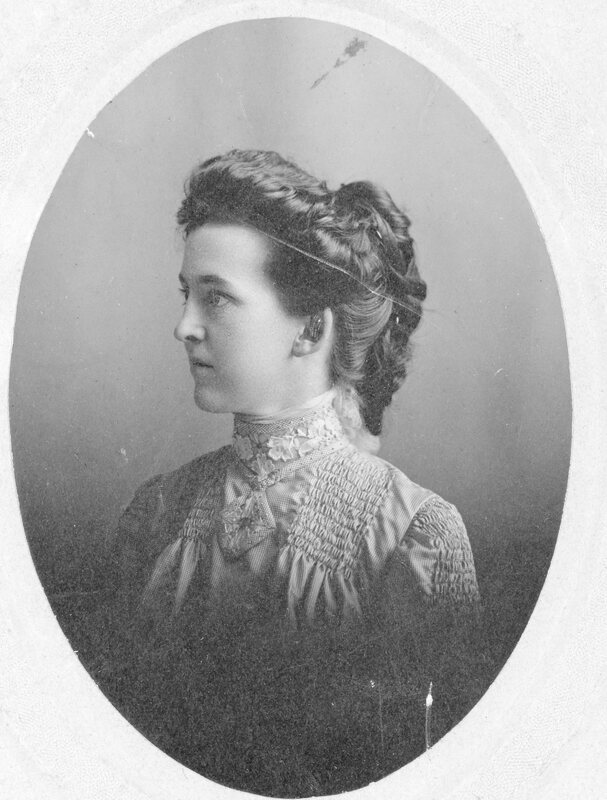 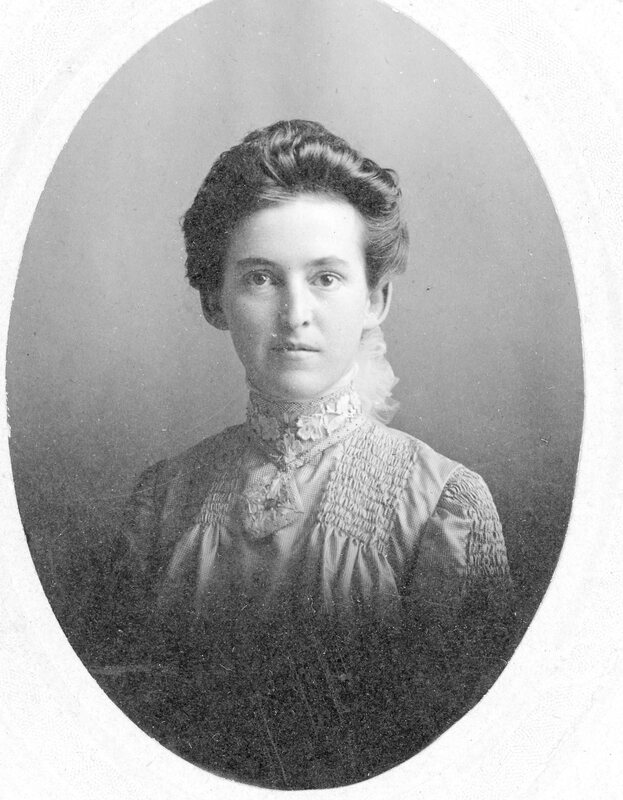 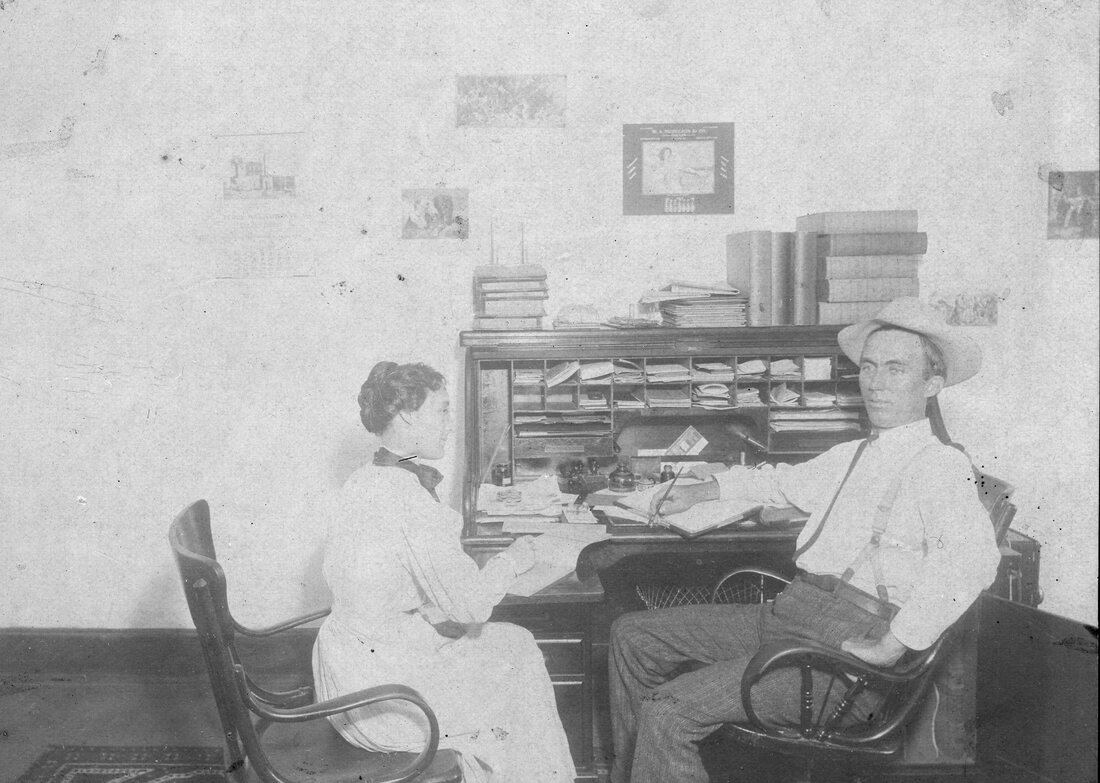 George's photo of "Henry Shaw in his office," Photo 7786. It doesn't identify the woman, but she looks much like Maud. 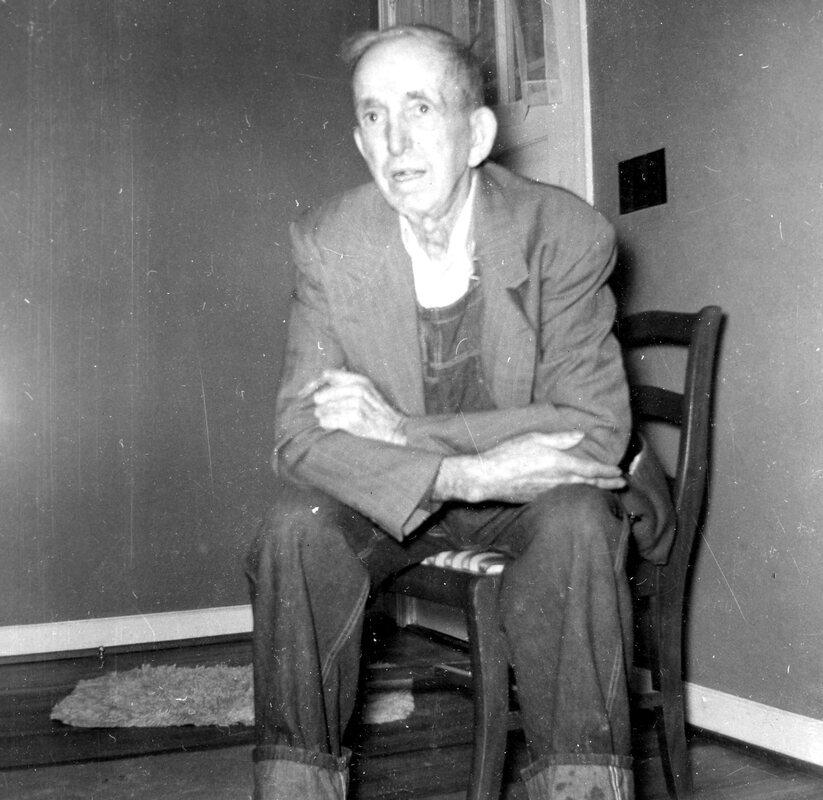 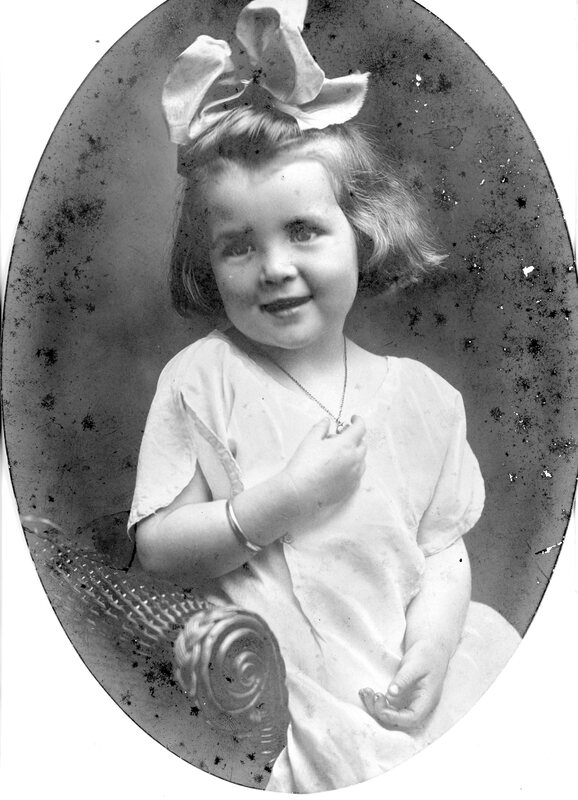 Photo 7787, "Helen Elizabeth Bain for Aunt Nellie." If this is Helen Bain Hodge, she graduated from Table Rock in 1925 and became a teacher at the grade school. 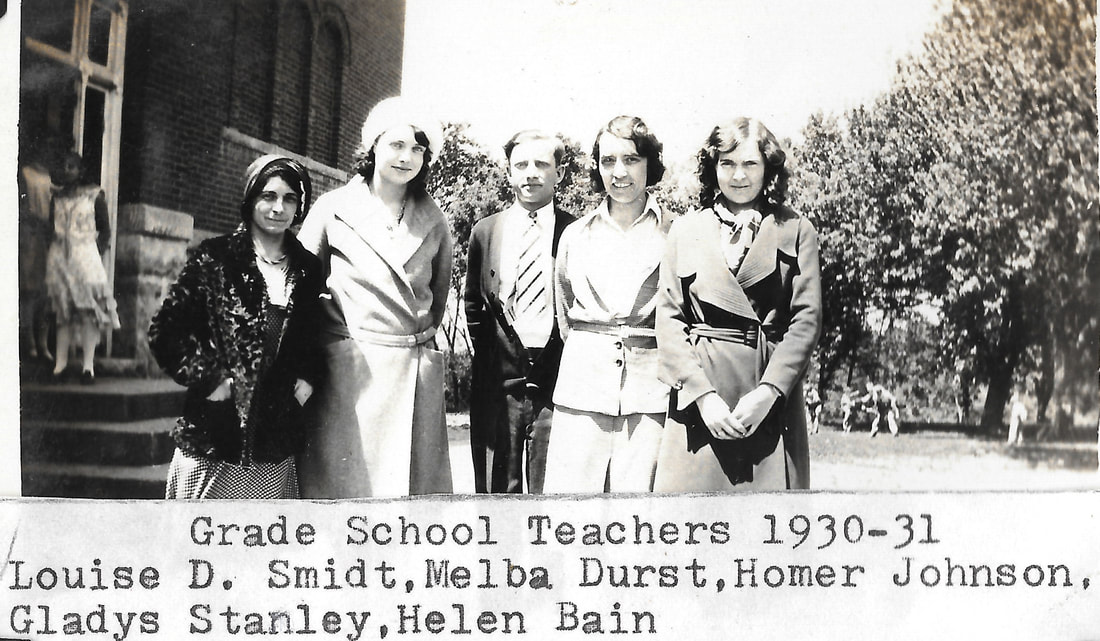 This is a photo from Mary Sturgeon, not George, but it has Helen Bain in it -- at the far right.

Nellie Bain married Will Binder, son of William & Kate Binder.  Here is a family picture of William & Kate Binder from Richard  Binder, grandson of Wesley Binder, the youngest child in the photo. In the back are Anna, Will (George's grandpa), and Charlie (dad of Charles, Glenn, Joe, Leland, and Willard).  In front are blond little Hattie, William & Katherine, and little Wesley with a polka dot bow. 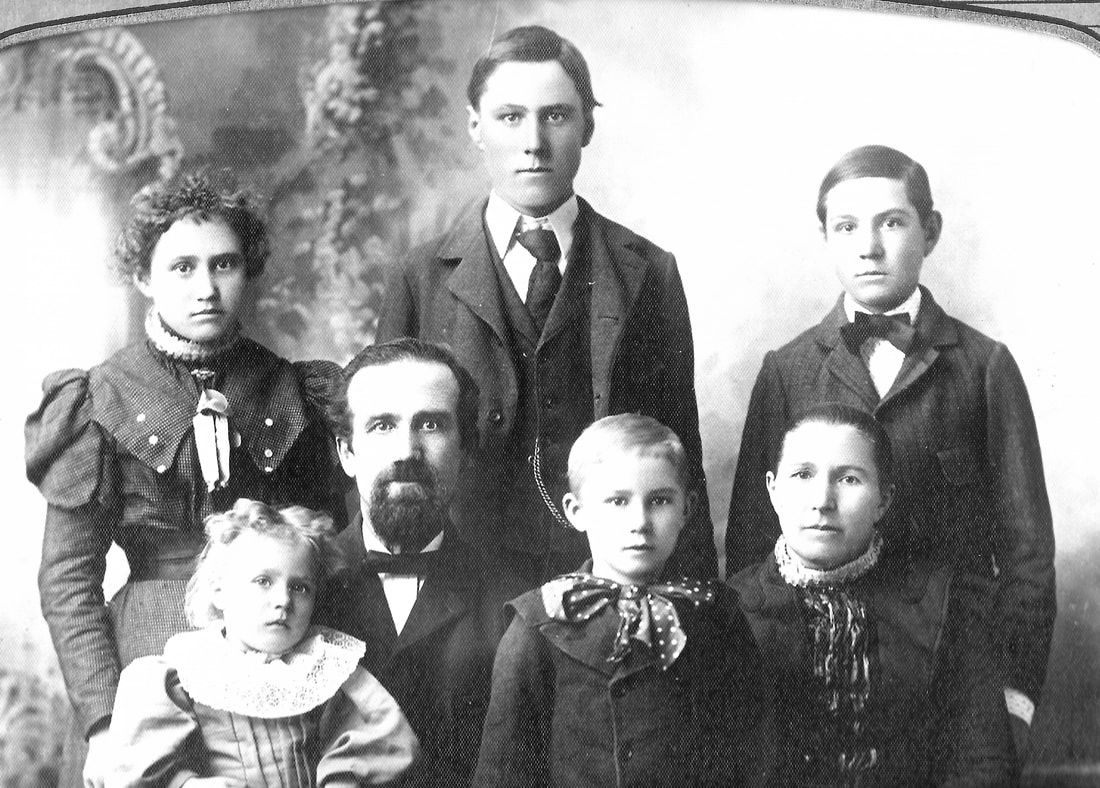 ​Note from Sharla: When George donated a box of family photos, he said that he hadn't gone through them, and would give me the pleasure of discovery. I asked if he remembered his grandpa Binder, and he had the vaguest of notions that his grandpa had a trained owl. "I know that sounds odd," he said, but that stuck in his memory.  An owl that would come to him. Well, there in the box was a picture of his grandpa -- with TWO owls. 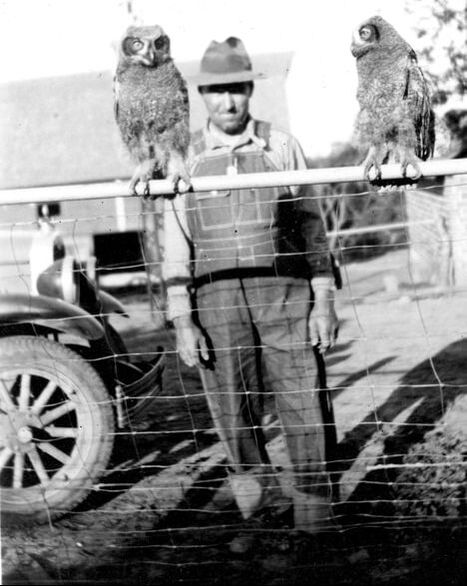 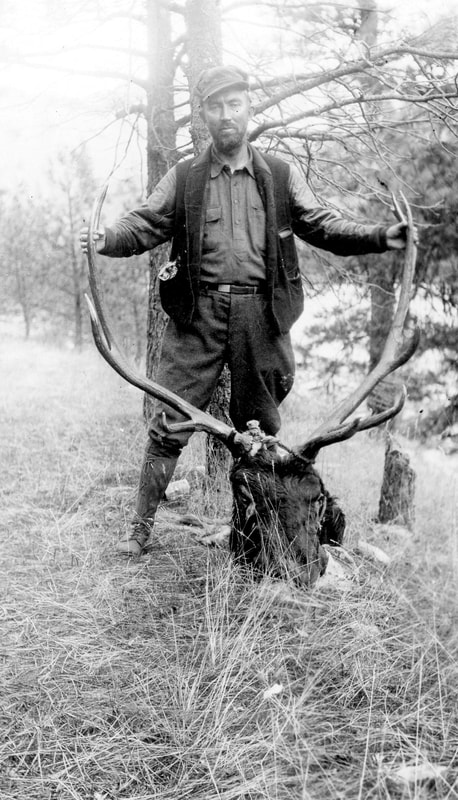 ​a picture of the extended family?

Note from Sharla: This photo identifies only George's grandpa Will holding his dad Jim, and his grandma Nellie Bain Binder in the back row, first woman on the left.  I recognize grandpa Will's mother, Kate Binder, who is the next woman after Nellie.  Then there are Julia and Peter Gold, whose daughter Goldie married Will's younger brother Wesley.  For a time reference, Jim (the boy in his grandpa's lap) was born in 1919. 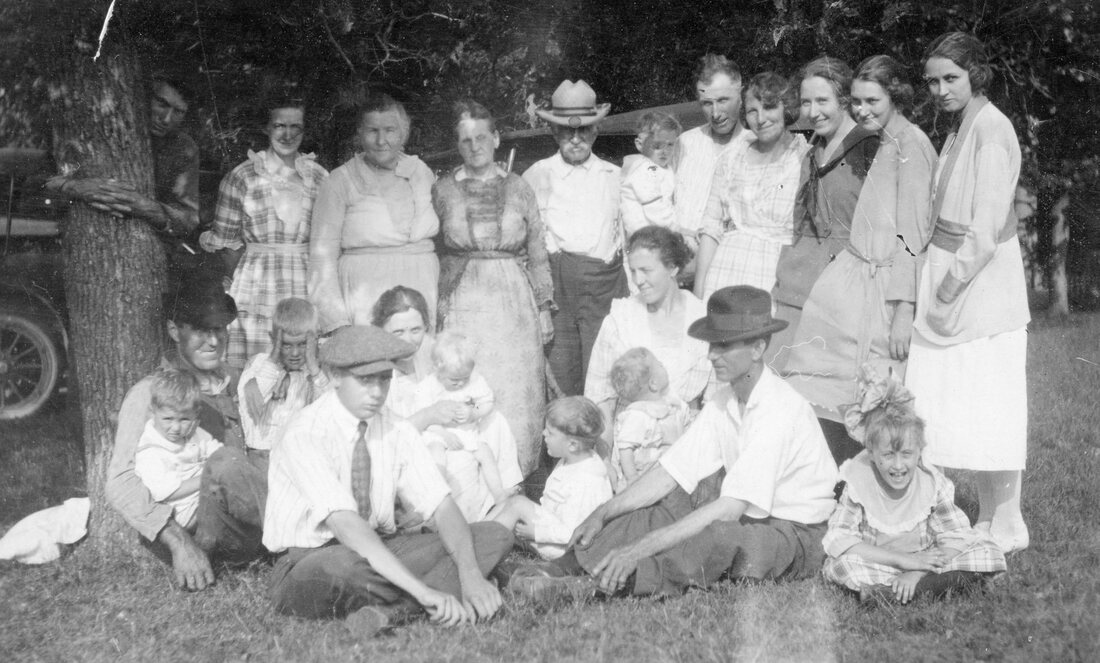 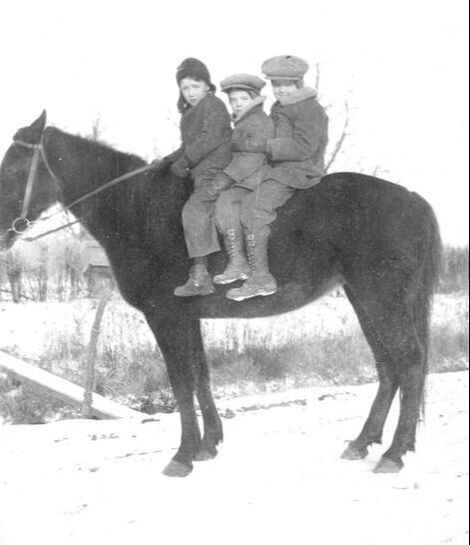 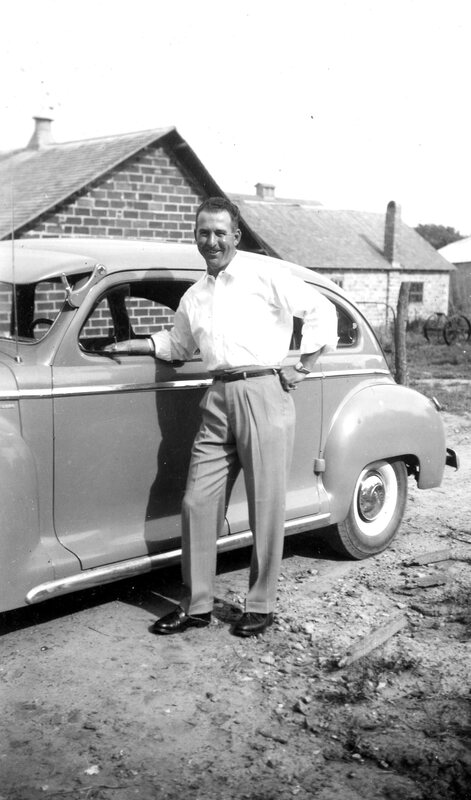 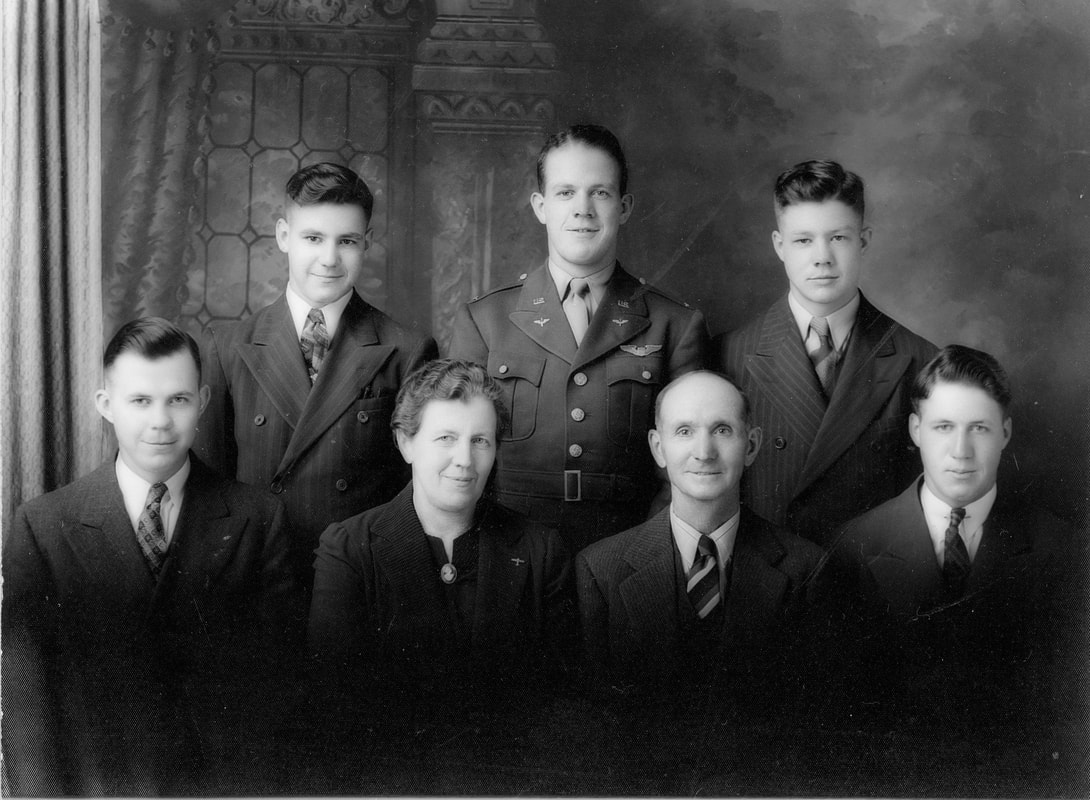 Photo 7778. This photo is not labeled, but it appears to be Violet & Charles Binder & their five sons,Charles, Glen, Joseph, Leland, and Willard. 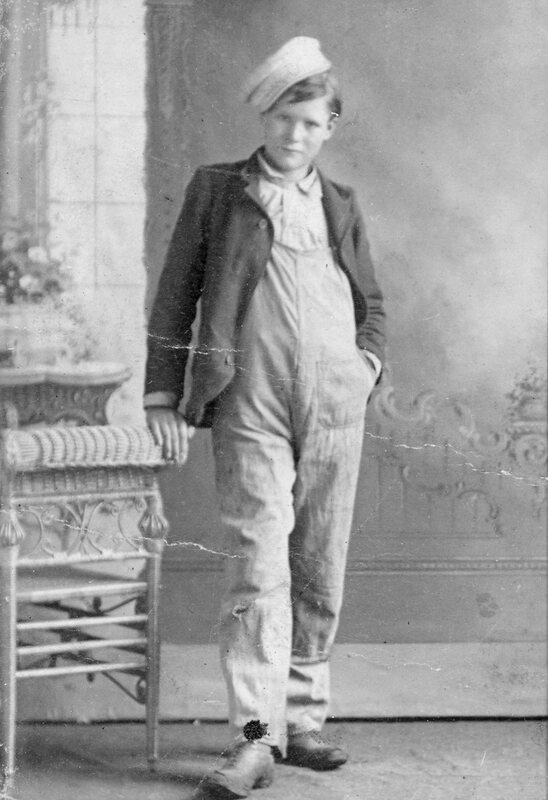 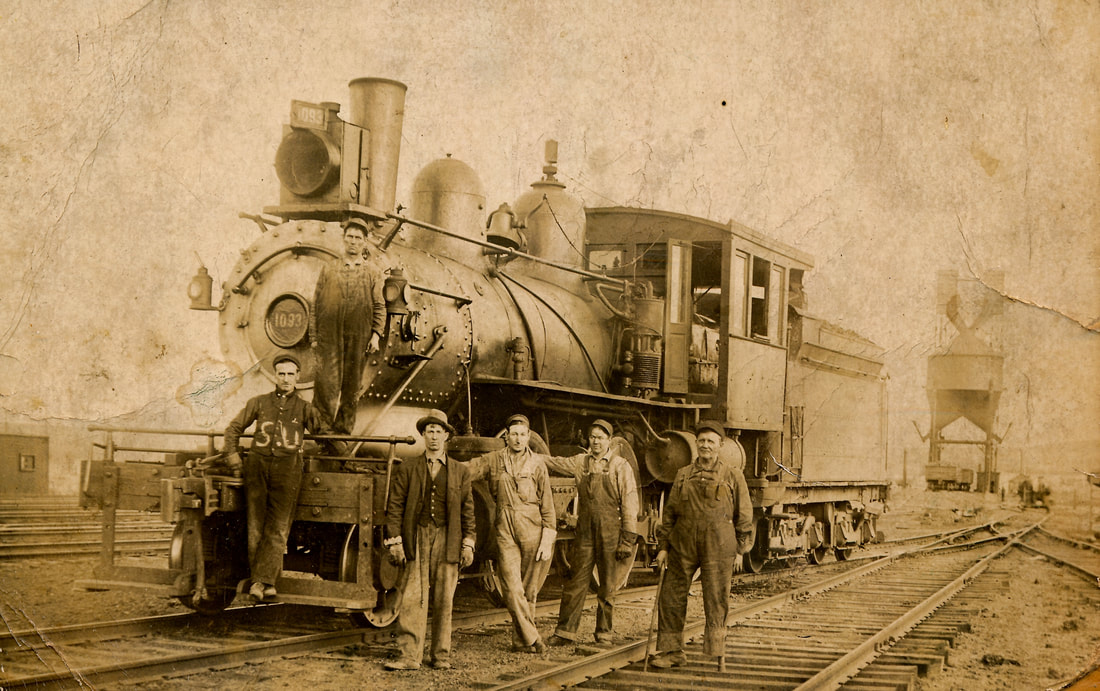 This is a photo from the Historical Society's collection, which also has Rufus Mapes in it. It is Photo 618. Rufus is on the ground, 2nd from left. He married Josephine Broders in 1907, the paper saying that they were two "well-known" young people of Table Rock, and he worked for the Burlington; they eventually moved away; word of a nasty divorce came in the papers, and nothing more. Where is he buried? Findagrave.com has no memorial for him. 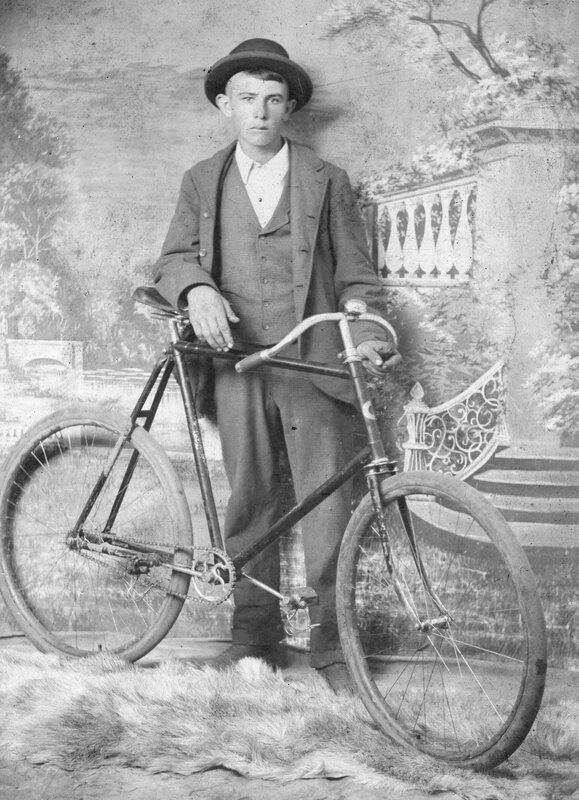 Photo 7789, Joe Hyke. There was a Hyke family in Table Rock at one time, but they apparently moved on. None are buried here. Photo 963 is a grade school photograph from the early 1900s and has a Hyke child in it. 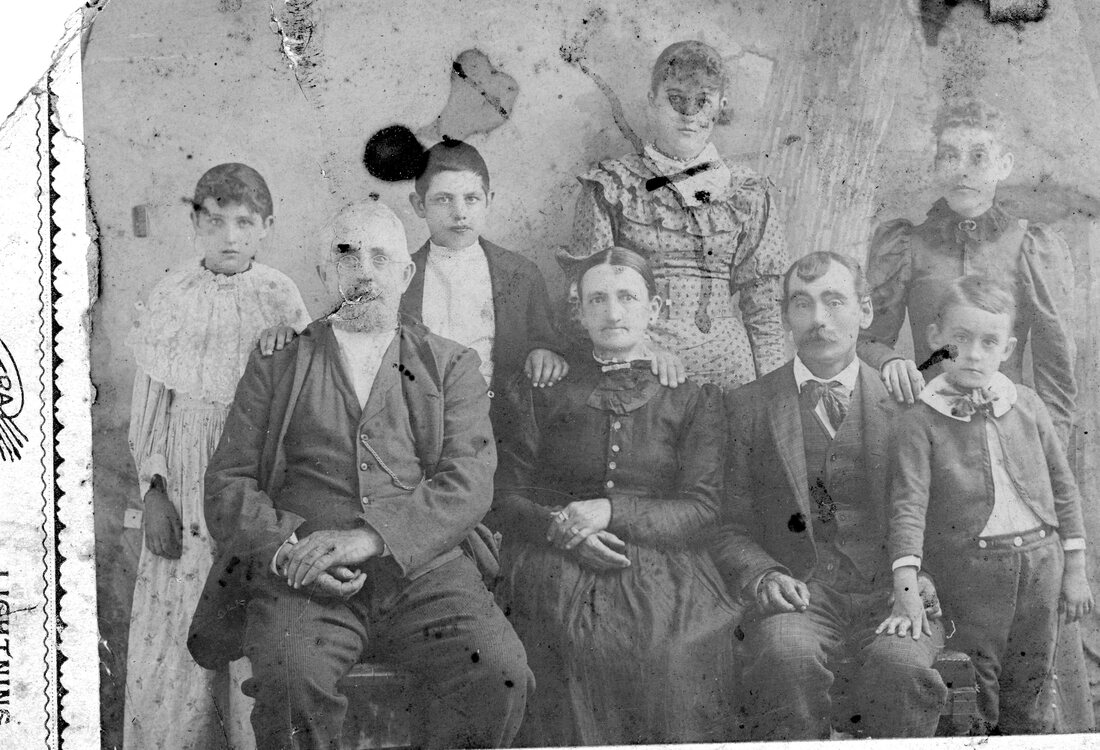 Photo 7795, labeled only as "Old Friends." It was taken at Welch's Lighting Studio in Elk Creek. 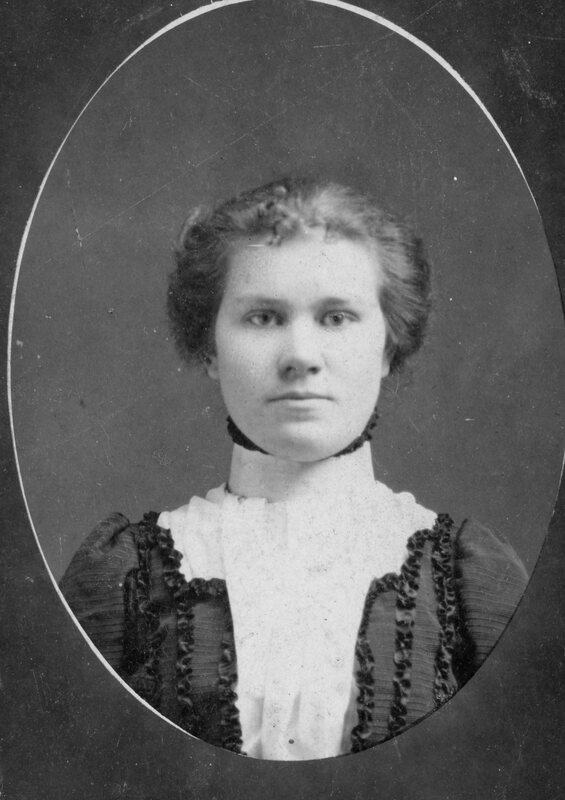 Photo 8100, unidentified. Might she be the taller girl in Photo 7795, immediately above? 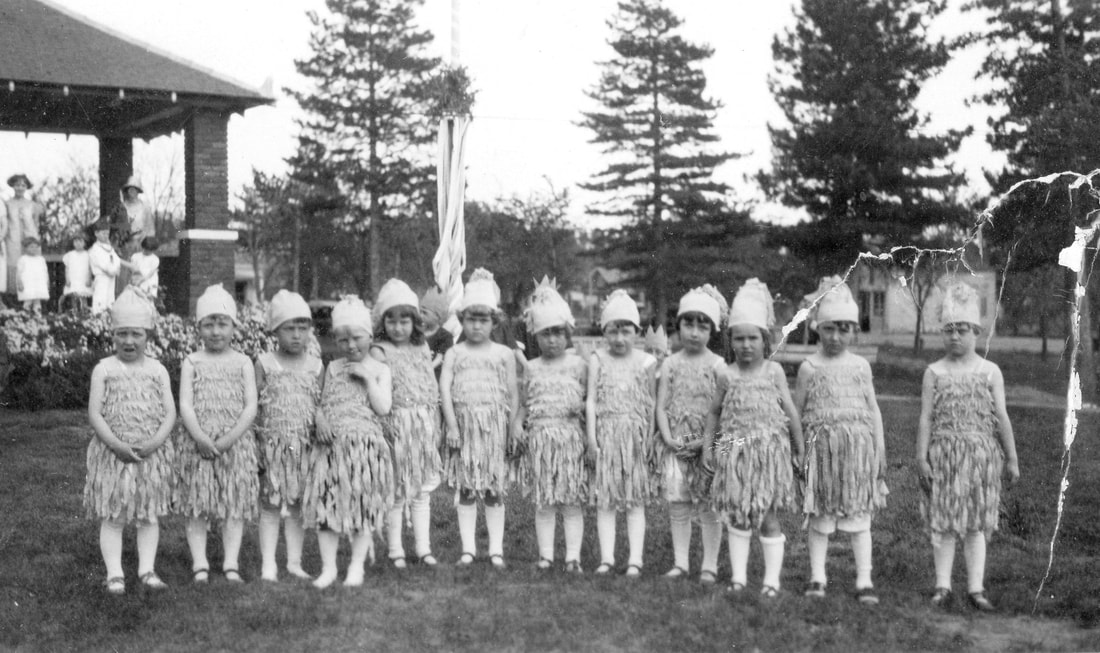 Photo 7792 -- little girls at the bandstand in the Square, early to mid 1920s. No names.
George's box of pictures also had some "things," including a book without a binding, on which is stamped "draft." It is a book by Peter  Van Fleet, who was once the Methodist minister at Table Rock.  Van Fleet later helped found Nebraska Wesleyan College and had a long and illustrious life.  In the end, he and his wife came to rest in the Table Rock Cemetery.  Van Fleet dedicated the book to his wife Eva, whose picture is in the front.  Only one page of text was copied, as an example.
View My Stats