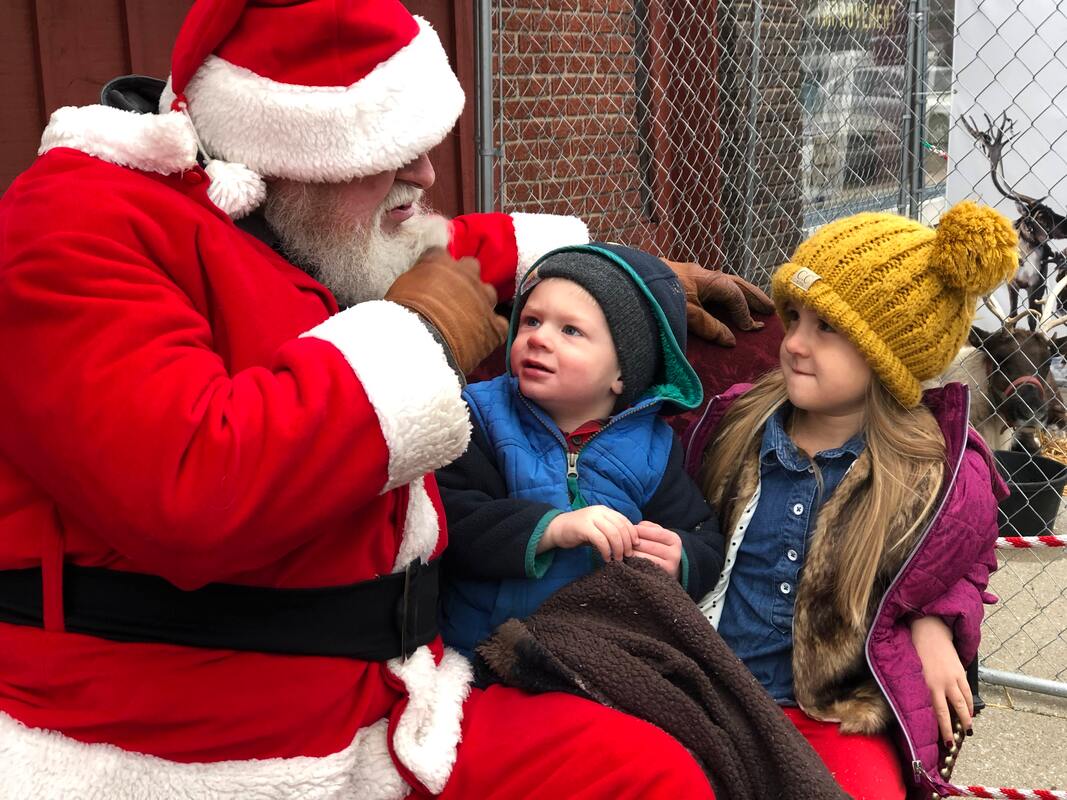 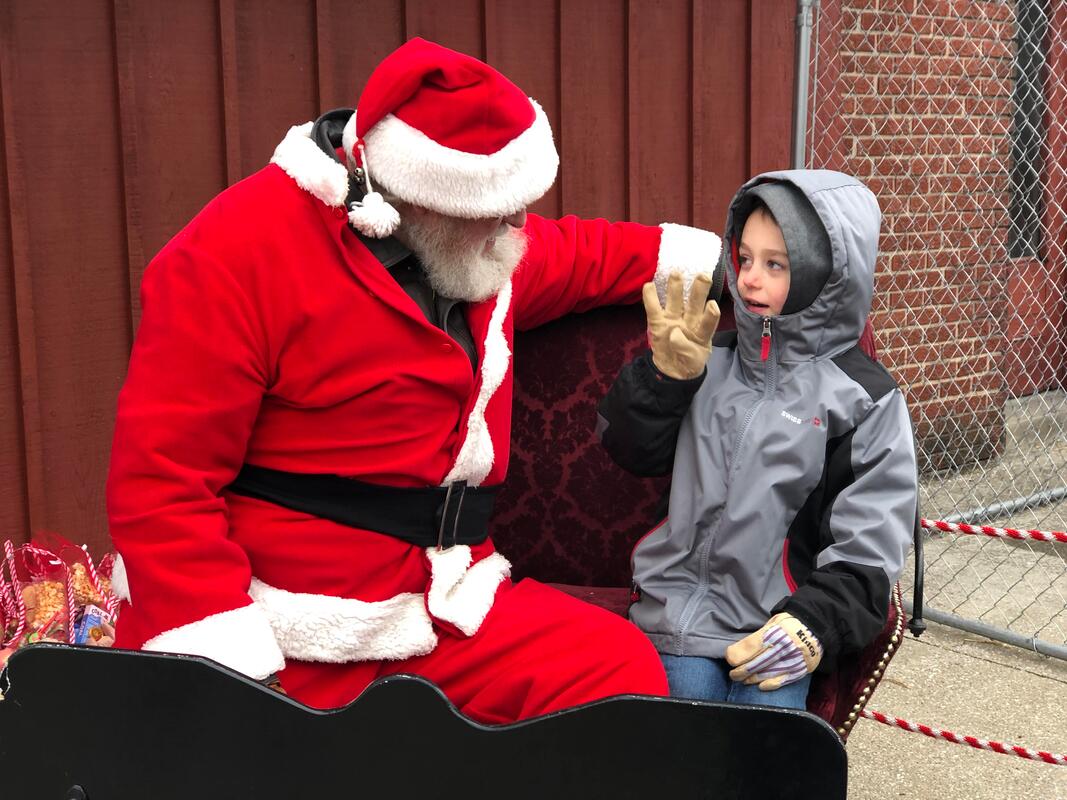 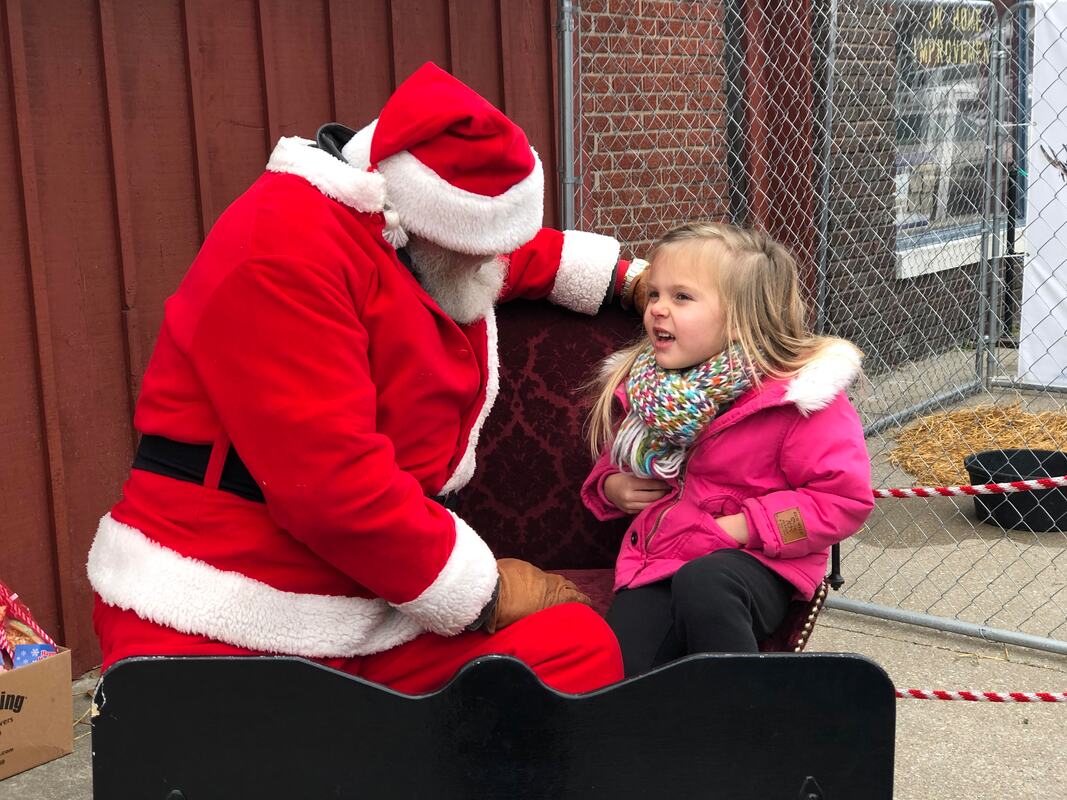 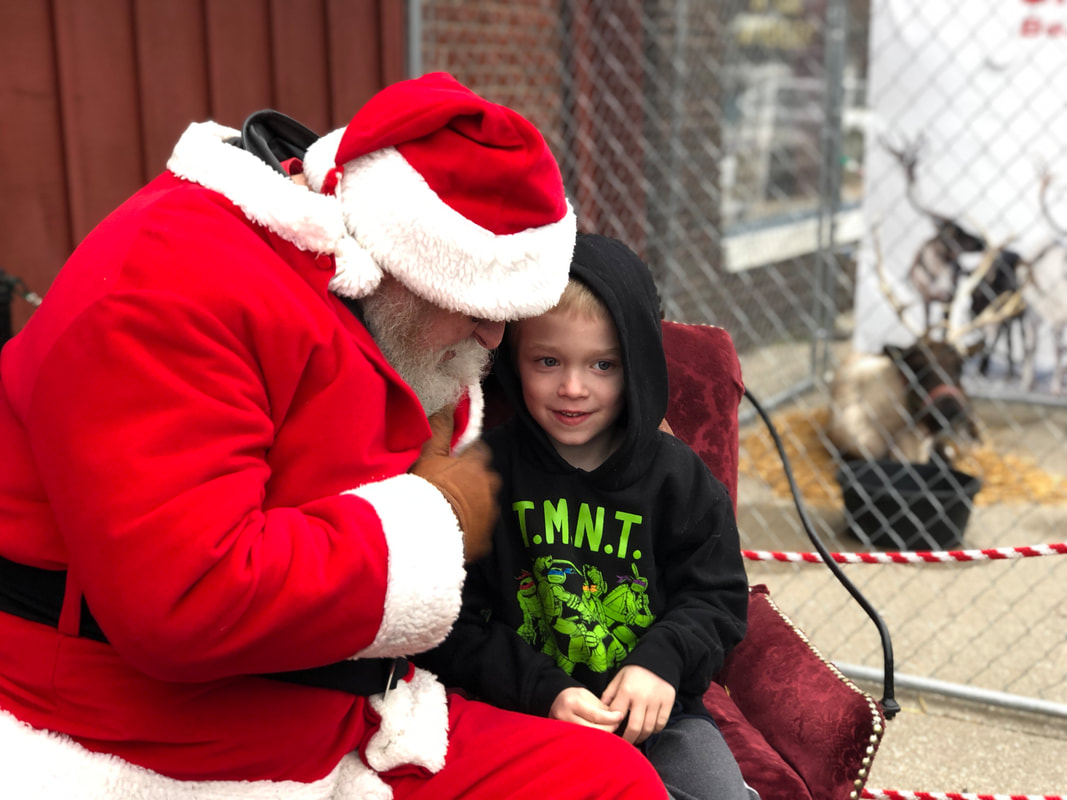 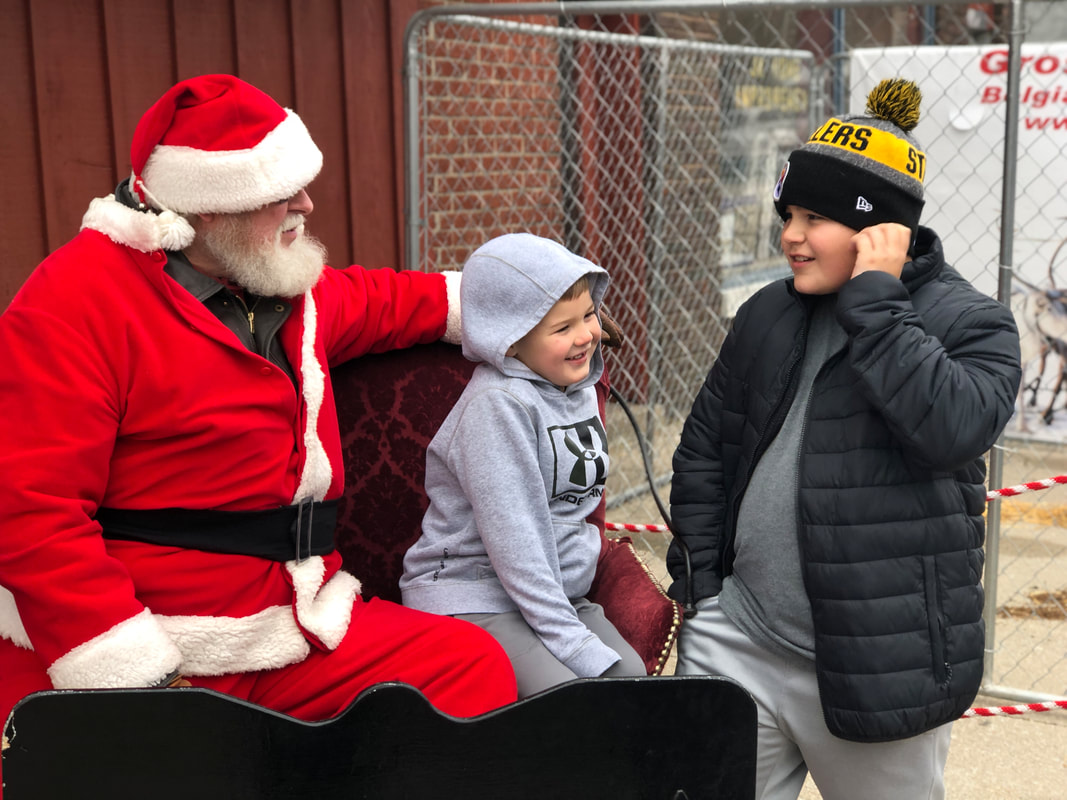 Santa, Mrs. Santa, and two of their reindeer, Blitzen and Prancer, spent last Sunday afternoon in Table Rock.  Over 50 kids braved the blustery afternoon of November 30 to stand in line in front of the Table Rock Senior Center.

Christmas came early this year because that was when the reindeer were available. Santa boards his reindeer at Gross Belgian R & J Reindeer and likes to travel around in the weeks before Christmas.  The State Bank of Table Rock and the Community Insurance Group bring Santa’s reindeer to Table Rock each year.

Santa arrived, as usual, on a fire truck, courtesy of the Table Rock Volunteer Fire Department.  He merrily headed straight for his sleigh where a long line of children and parents stood.  Most had both father and mother with them, always a welcome sight.

There were only a few terrified young ones this year, but most were too little or too shy to speak above a whisper.  I could not hear a single wish, although each little face was earnest.

Santa (Glenn Hogue of Auburn) wrapped an arm around the back of the sleight seat and leaned in close to listen to each child.  He took his time to talk with each child before hearing their request.  “How do you like my beard,” he sometimes asked, “It’s real, you know.”  One little girl tugged a whisker.  Trust but verify.  “You live on a farm, do you.  Do you have any deer on your farm?” Santa gestures to Blitzen and Prancer.  “I have my REINdeer he says,” with a broad smile.

Mrs. Santa (Cheryl Clement of Table Rock) stood by smiling, but was very very cold.  Santa had his big coat with fur trimming, but Mrs. Santa wore her special dress with an apron and eventually overcame feelings of impropriety to put on a warm coat herself.

As they stepped down from the sleight each child was given a Christmas stocking from the Table Rock Community Club and a special cookie and some popcorn made by Table Rock’s own Jennifer Newman.  Then they headed inside where the Community Club, led by Missy Freeman, had set up homemade treats, mulled cider, and hot chocolate.

Lots of cheerful visiting went on in the main room, and many then drifted into the movie theater where the Community Club showed Christmas cartoons on the 12’ wide movie screen.  Trade Day used to feature raffles, with prizes from the various merchants offered to the adults, followed by the arrival of Santa, and then the kids went to the theater for free movies. That was special because otherwise – at least in the 1960s when I was a kid – was a whole 35 cents.  Trade Day was then put on the merchants.  It survives in the form of this Christmas party put on by the Table Rock Community Club.

Many of the parents remembered this special tradition of free Christmas movies in the theater after Trade Day raffles.  Many of the children last Sunday experienced this tradition for the first time, and they sat enthralled.  There was an intermission with a break for a raffle for kids, organized by Amy Hunzeker.  Two bicycles were offered by an anonymous donor and were won by Wesley Pagnano and Kaitlyn Dietz. The Table Rock Legion Auxiliary, which meets in the Senior Center, once again donated special gifts. They were won by Brylin  Messing and Graham McDowell. And then there were a variety of other small gifts.  As each child’s name was drawn the child could come to the front and pick something from a collection there.  But they had to do it by the count of 5.  It turned out that there were enough gifts for each child to win.

Table Rock is ready for the holidays. Missy Freeman led an effort to put up a Christmas tree in the old bandstand, and festooned the band stand itself with lights.  The Table Rock Historical Society has its tree up in the Argus Museum and periodically plays Christmas music using the outdoor speakers installed this year by Kim Vrtiska. 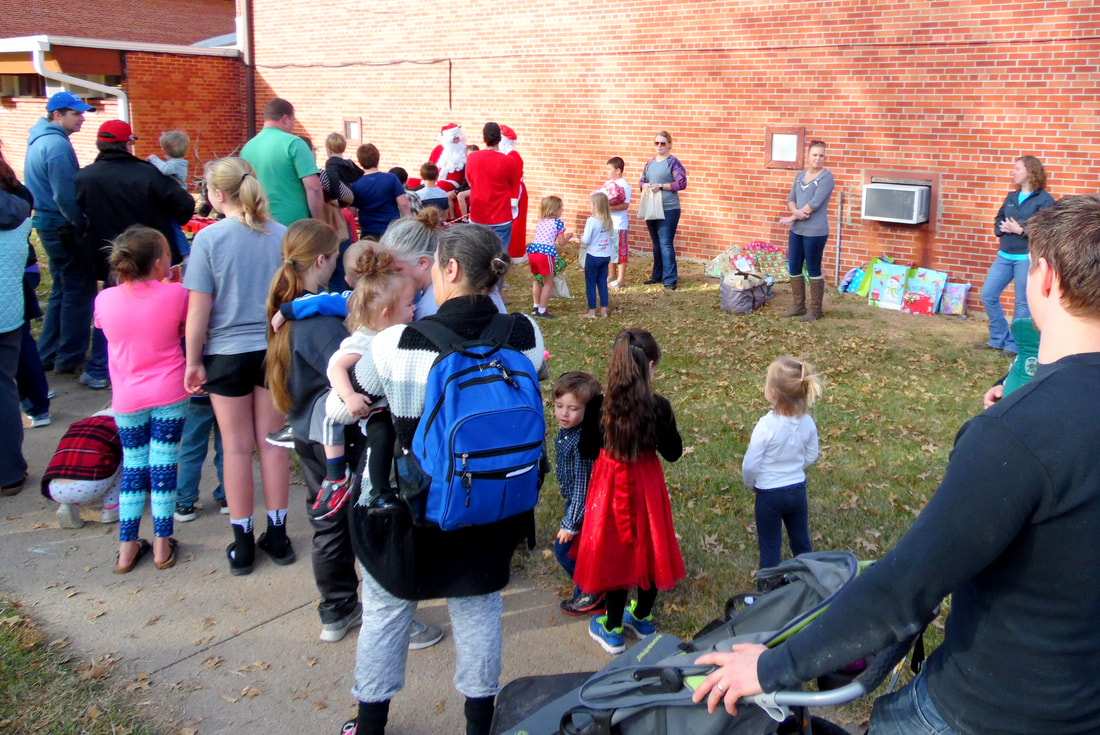 This year the Community Club celebrated Christmas for the kiddies.  The very long tradition of "Trade Day," when people far and wide were invited for a meal and raffled gifts, was transmuted.  Trade Day was a day when Table Rock businesses basically threw a huge party to thank all of their customers for their business.  Turkeys were raffled, Santa came.  Now there are few businesses and it has become simply a community party. Two years ago, the raffle was changed to just the kids but a soup dinner was still served, with lots of great deserts.  It was for a goodwill donation.  Sadly the donations averaged less than $3 a person.  In 2016, a modest price was set but again the great effort put out by a few turned out not to be worth it.  And last year the situation was different, because the Table Rock Fair had been revived only a couple of months before.  The same core group of people were nearly burned out.  This year it was fun for all who came, including the volunteers.  Santa ad Mrs. Santa and their elves did most of the work.  So there you have it.  The current history of Christmas in Table Rock.

Some of these were taken at home or in businesses, or around town in general.  Others were taken at Trade Day is what we in Table Rock call the village Christmas party. It used to be held by merchants as a thanks for those who traded with them during the year.
View My Stats