THIS PAGE IS UNDER CONSTRUCTION, AND EXTREMELY INCOMPLETE

Here is the only known photograph of a remarkable man who was well-loved by the community of Table Rock, Nebraska. It was taken on the occasion of his 50th wedding anniversary to his wife Kate.  Captain Jennings was a man of courage and enthusiasm.  He was a patriot.  He was a man of words, a man with a sense of humor, a man with a whole town of friends.  His obituary rightfully said, "He lived a vigorous life."  Writing a tribute to him is the most daunting of tasks.  This small efforts strikes out into a territory that sadly, today, will remain known only by newspaper stories and the legacy preserved by a few friends in his native county in deep Virginia. 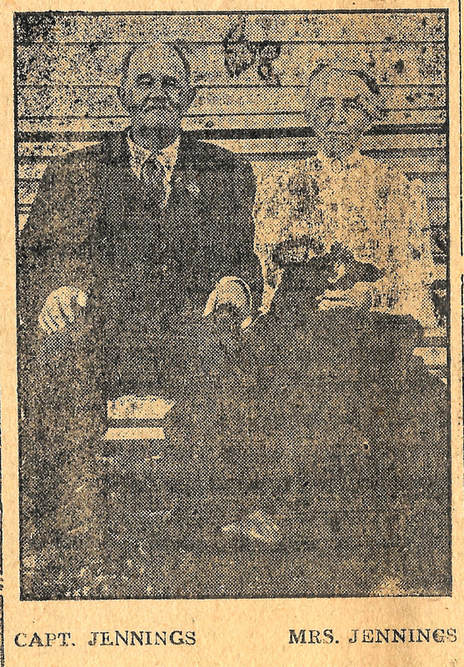 ​jennings before the CIVIL war

Captain Richard Polk Jennings was born in Halifax County, Virginia in 1844.  He was raised at Elm Hill Plantation, a 242 acre estate. By modern standards it would be a small farm, but in those days it was a bit more grand.

After Dr. Jennings' death, Betsy married another physician, Dr. Samuel Peter Hales.  Dr. Hales bought the farm and the family continued to live at Elm Hill. Dr. Hales and Betsy had at least two children together, Susan (?-1942) and Peter (1860-1948). 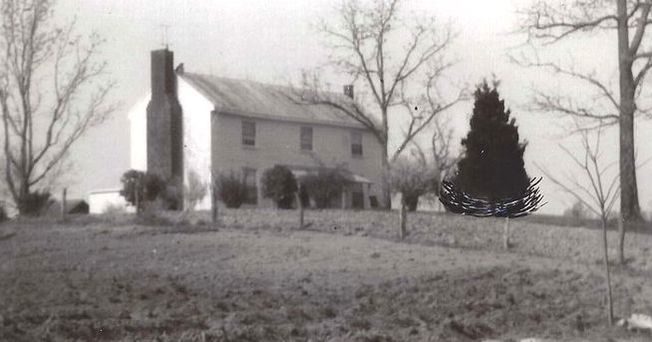 1861
jennings in the civil war

a prisoner of war as his unit surrenders at appomattox courthouse

after the war
jennings gets married, lives in virginia a while,
​then heads for nebraska

Jennings returned to Halifax County and on November 7, 1865 married a local girl, Susan Catherine Ballou, who went by Kate. They were both 21 years old, but with a war behind them, their life experiences can only be imagined.  (Richard & Kate were separated by her death in 1922, after 57 years of marriage.)

Their daughter Minnie was born in 1868.

1873
the jennings arrive in table rock

In 1873, Richard & Kate arrived in Table Rock. There they welcomed two other children, daughters Alberta and Fannie, in 1873 and 1874.  There, too, they found welcome by friends, who increased in number as the town grew rapidly for the next few decades.
Note: 1887 account by Frank Taylor, "fall in," decoration days, 4th of july, spanish-american war, politics, businesses including restaurant, H. Chambers' account, obituary
​ 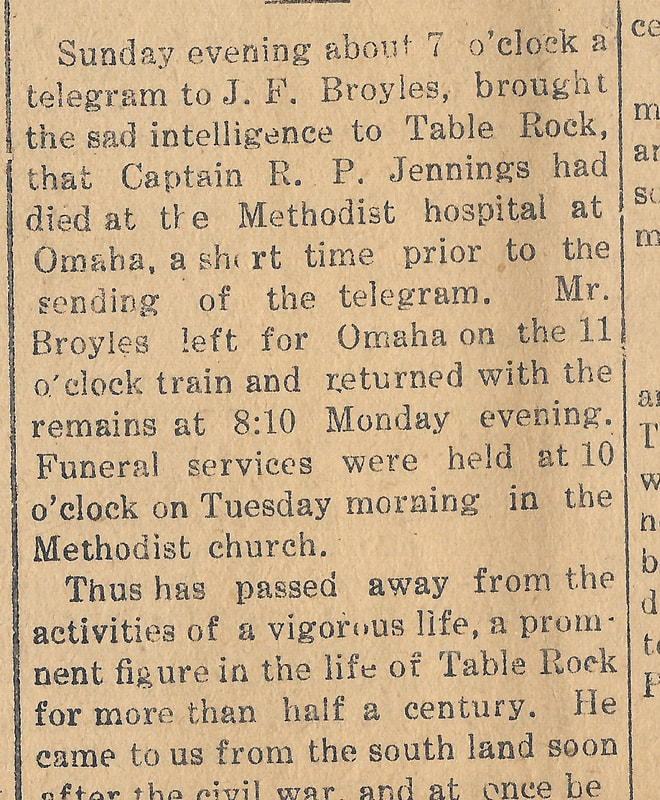 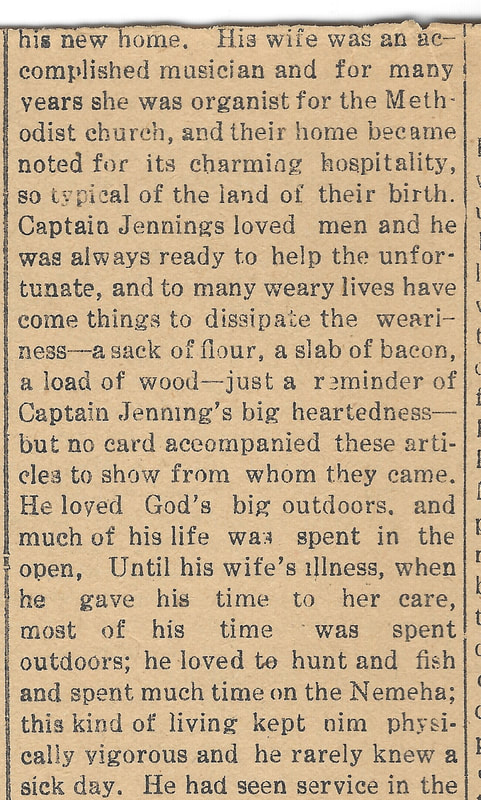 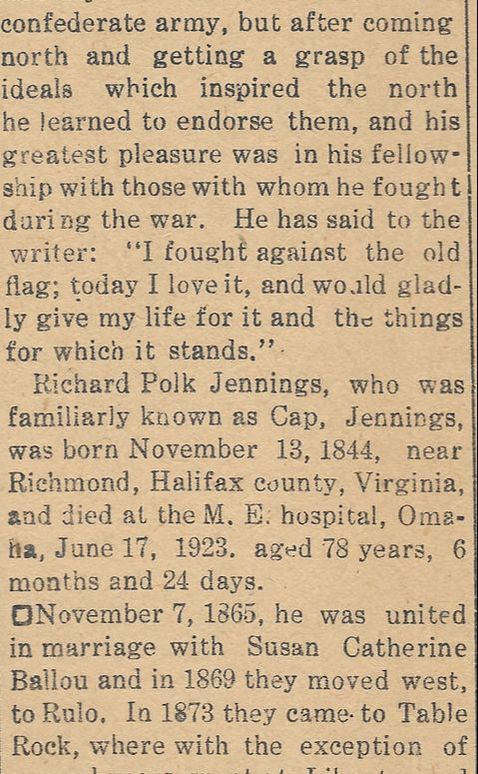 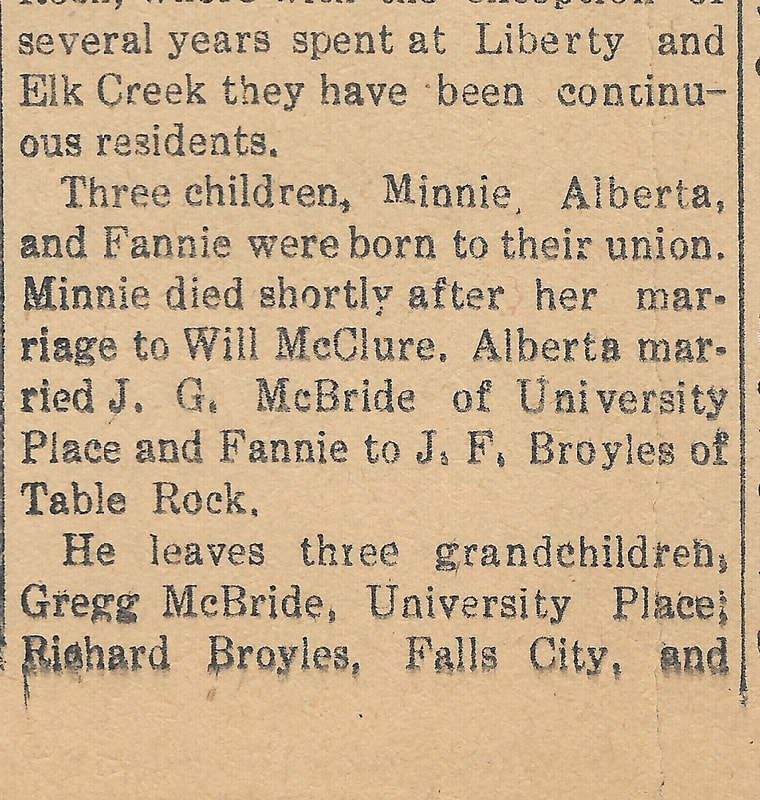 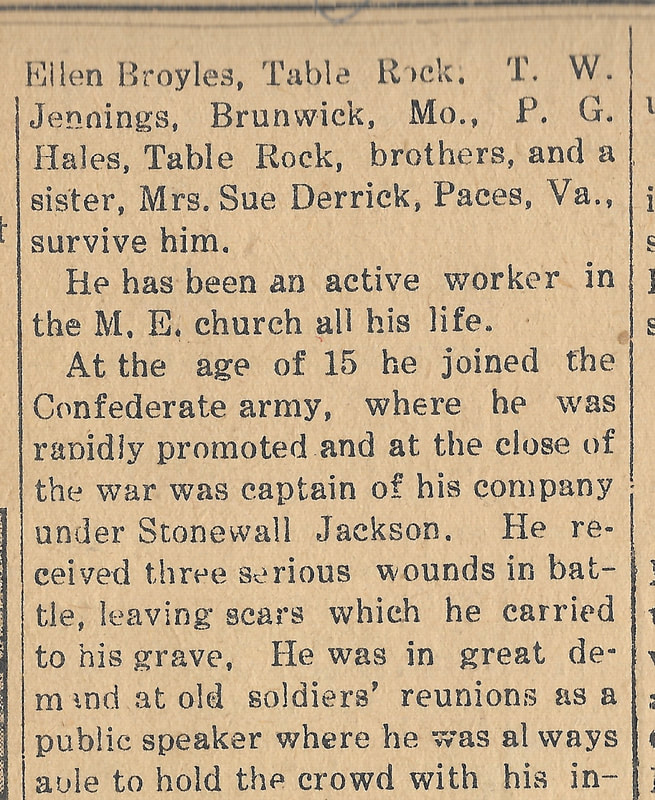 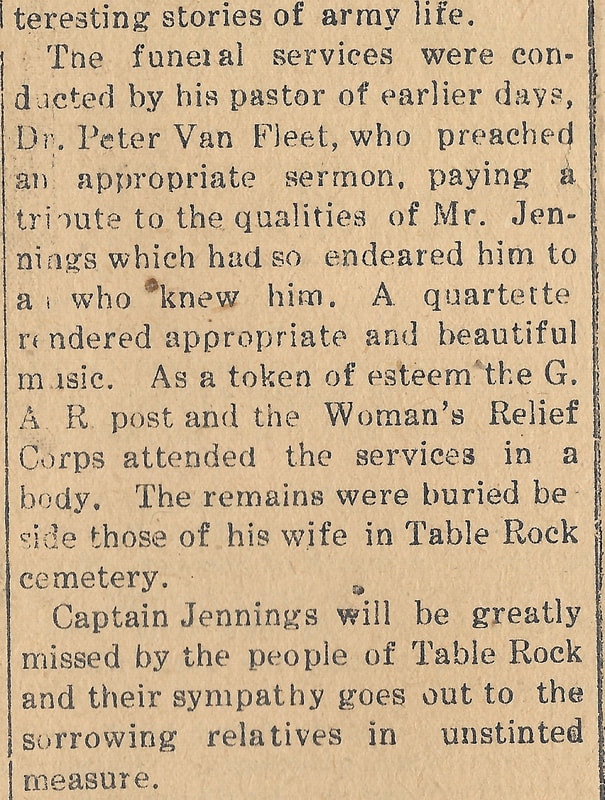 A letter to the Captain's grandson -
The captain "just barely got stahted!"

In December 2015, I was looking for something else and ran across a 1948 story about Gregg McBride speaking at a sports banquet in Table Rock.  I recognized the name McBride as the married name of one of the Captain's daughters.   Setting the Argus aside, I learned that Gregg had been a well known sportswriter for the Omaha World Herald for many many years.  I then followed bread crumbs in the Argus about the banquet that led to a wonderful added dimension to the story of the Captain, a score of year after his death.

The December 16, 1948 edition of the Table Rock Argus contained a letter written by Harmon Chambers. Chambers, who graduated in 1905, wrote about the Captain Jennings of his childhood.  His hilarious story about diving for clams in the Nemaha  adds another layer to the story

captain jennings in the news 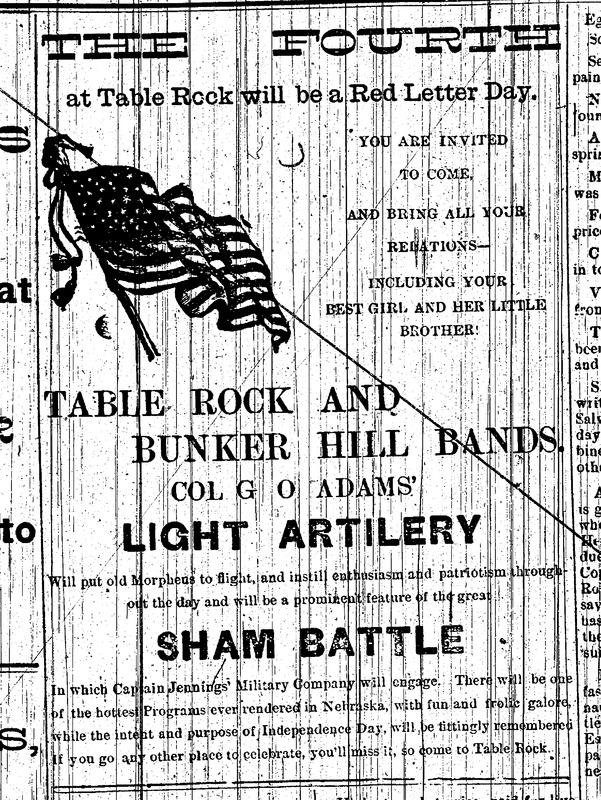 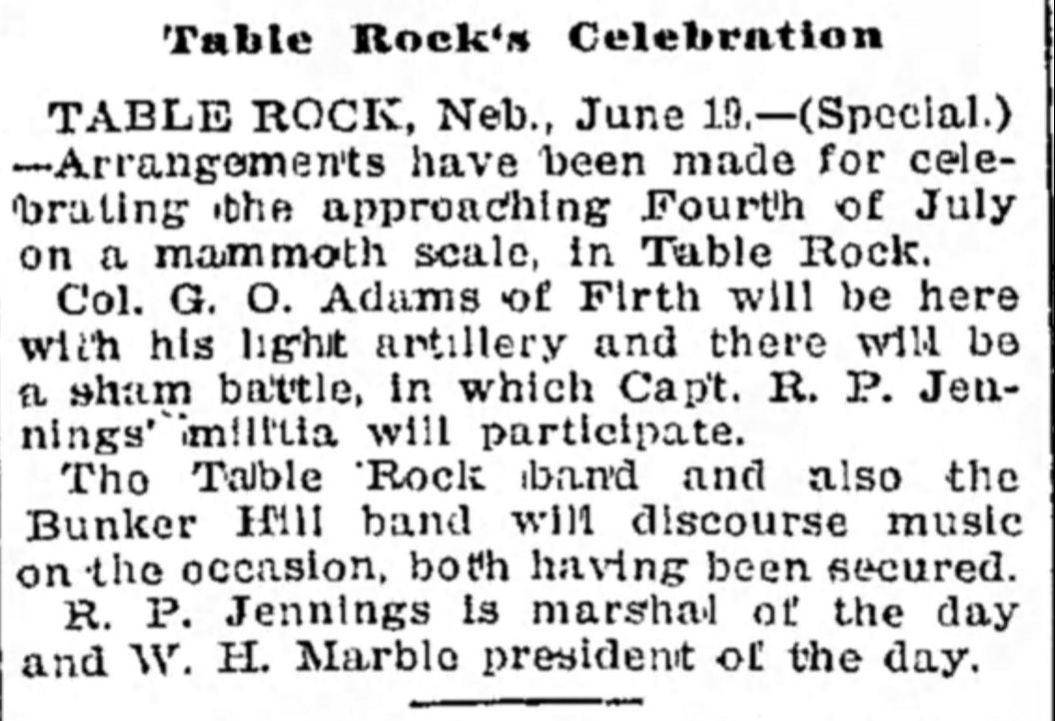 at the table rock cemetery 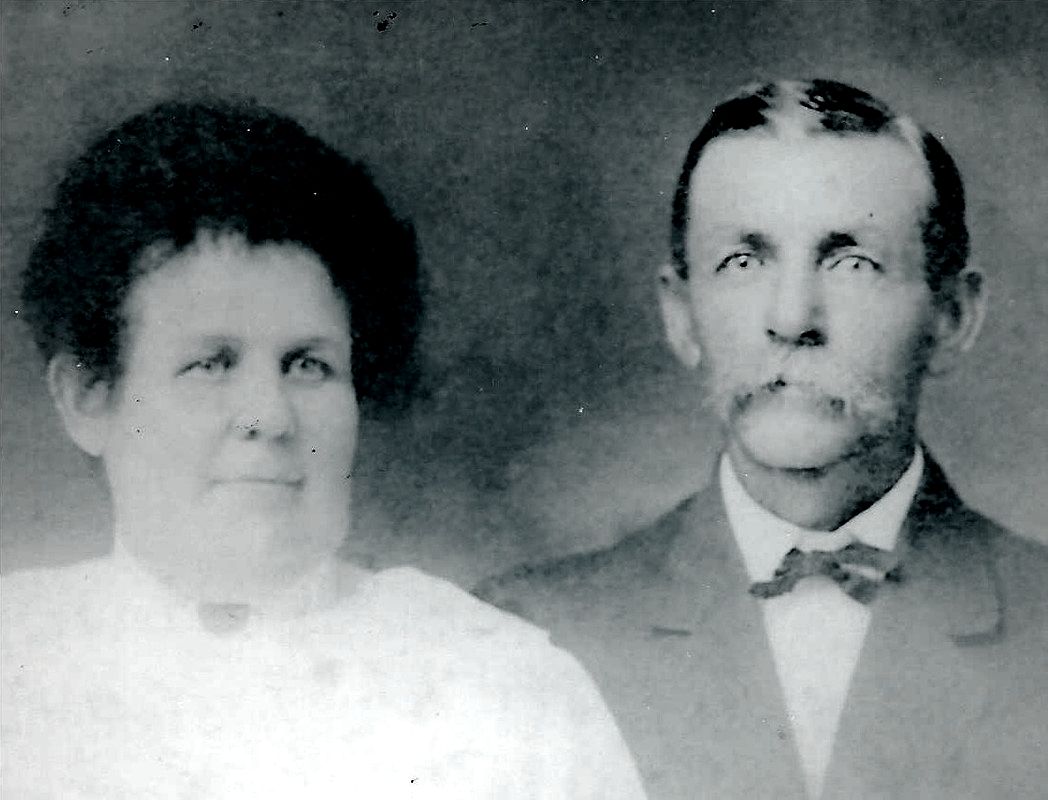 His memorial tombstone in the Edmunds Family Cemetery, a small but well-maintained place with only about a dozen burials, but they include both Captain Jennings' mother and father.  (His father's grave is unmarked.)
Excerpt of a November 12, 2015 email from Ginger Gentry in response to the first message from the Table Rock Historical Society reaching out to her:

Sharla, it is odd that you sent me this message. I am in the process of trying to find out about

​Richard's family. I know who is Parents are. His Father died when he was young and his Mother married
again. Her 2nd husband Cpt Hales was in the same Co as Richard  in the Civil War.

I guess you read my bio and see I work a lot with Civil War Veterans.

We own the Brooklyn Store & Post Office where the Brooklyn Grays joined the Confederate Army.
My husband Mack and I restored it and it is on the Virginia Landmarks Register and the National
Register of Historical Places,

I have found the grave sites of a lot of the 23rd. We put the memorial stone up for Richard beside his mother.

Do you have a photo of Richard?

This is collected on the FindaGrave memorial created by Ginger. The link is above.

1920 census living in Table Rock,Nebraska
Richard and Kate are age 75 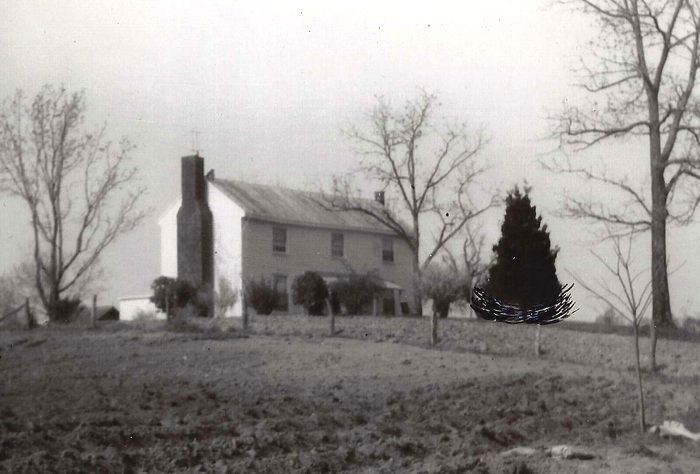 Elm Hill may look like a nice home by modern standards, but in 1844 when Richard P. Jennings was born, it would have been high living indeed.
Captain Jennings' mother was born Elizabeth (Betsy) Edmunds.  She was the daughter of Captain Henry Edmunds and Martha Stuart Morton. Betsy married Dr. Robert Garland Jennings and to that marriage was born Captain Richard Jennings, eventually to be of the village of Table Rock, Nebraska.  They lived at Dr. Jennings home, which was the Elm Hill Plantation, a 242 acre estate.  After Dr. Jennings died, Dr. Samuel Peter Hales purchased it and he and Betsy continued to live there.  Ginger says that the farm was later known as the Hales-Derrick place.  The building was torn down in the 21st Century.

the countryside where captain jennings grew up

Ginger Gentry suggested a look at the area by perusing the River Road Driving Tour:

Another view of life in Halifax County is this information about Woodlawn Plantation. It was not in Brooklyn, but it must have dominated the way of life there in many ways.
Here are some of the historic places which Captain Jennings may have seen as a boy:
Woodlawn Plantation
View My Stats