breaking the law as established in ordinance 74.

An ordinance of the Village of Table Rock, Nebraska once prohibited public nudity and also the wearing of "any dress not belonging to his or her sex." Take a look at Ordinance 74, Chapter 4, Section 24, enacted in 1911. (Ordinance 74 "embraced all of the ordinances" and "added to and perfected" them.)  Just as the ladies of town took to wearing jeans and other  "male" attire, Table Rock men just loved to dress up. 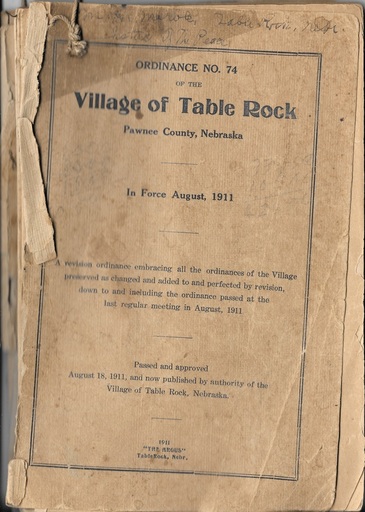 Photo 226. This appears to be the cast of a 1952 play called an All Star Wedding, see the program below it.  The venue is the Table Rock Theater (observe the light fixtures and the proscenium) although the background screens are from the Opera House. 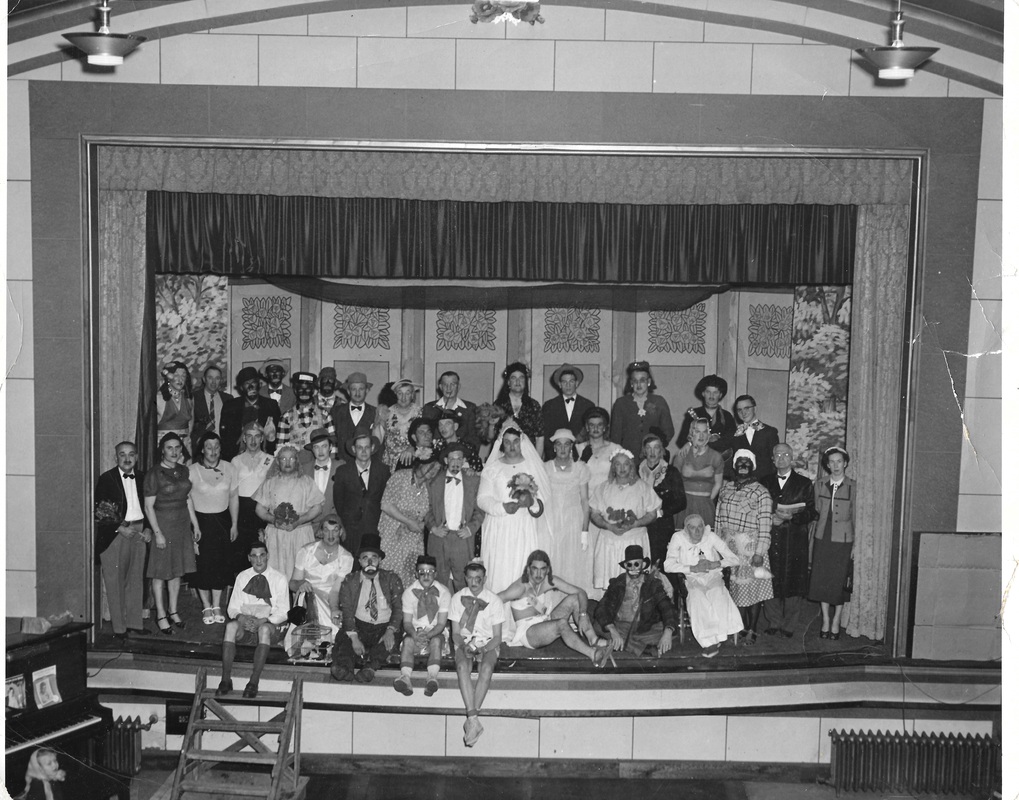 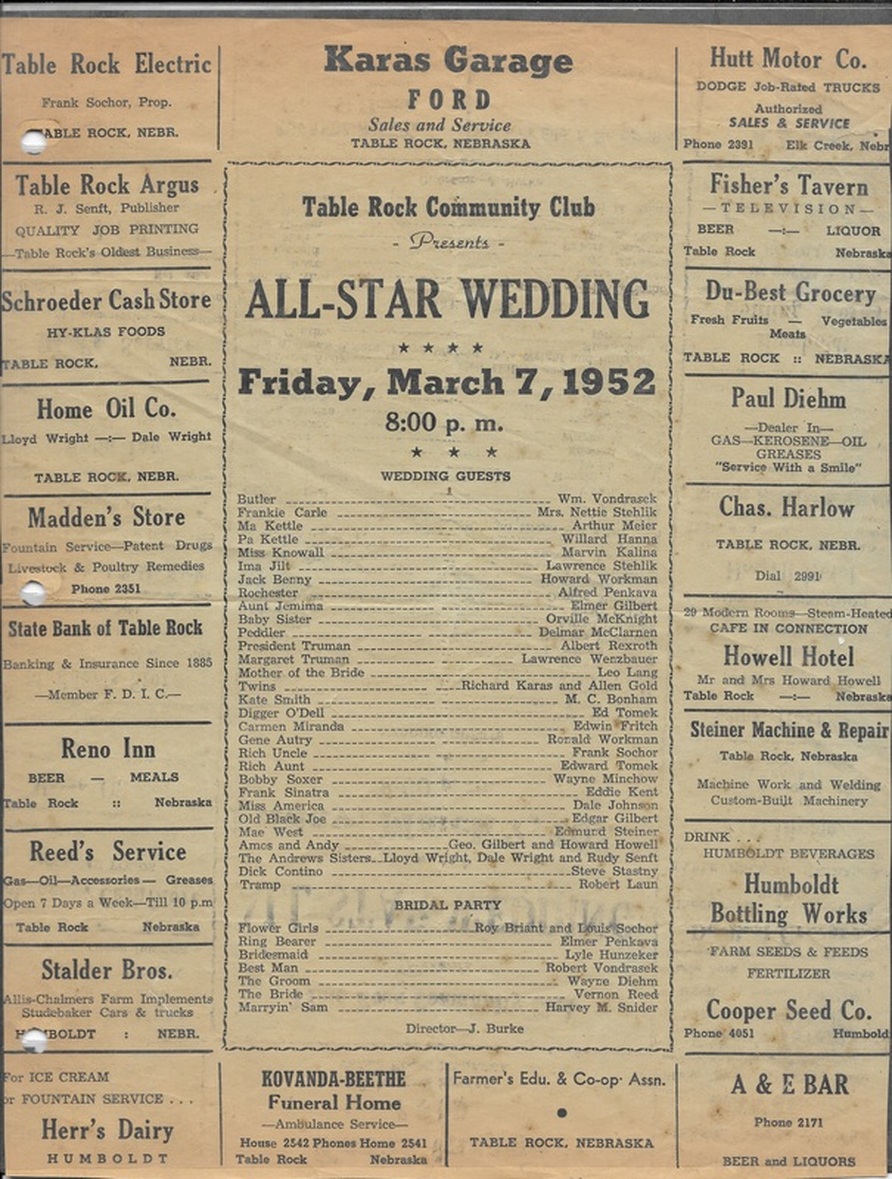 The play "a womanless wedding"

Photo 13 shows the cast of a Womanless Wedding. The venue for this particular photograph does not appear to be Table Rock.  The bottom part of the stage curtain is not from the Table Rock Opera house and the Opera House proscenium is square.  The Table Rock theater's proscenium is likewise square.  Perhaps the venue is in Pawnee City, it has been suggested, with a Table Rock cast.   Historical Society member Kim Vrtiska remembers being told that this play was put on by a traveling company that incorporated local actors. 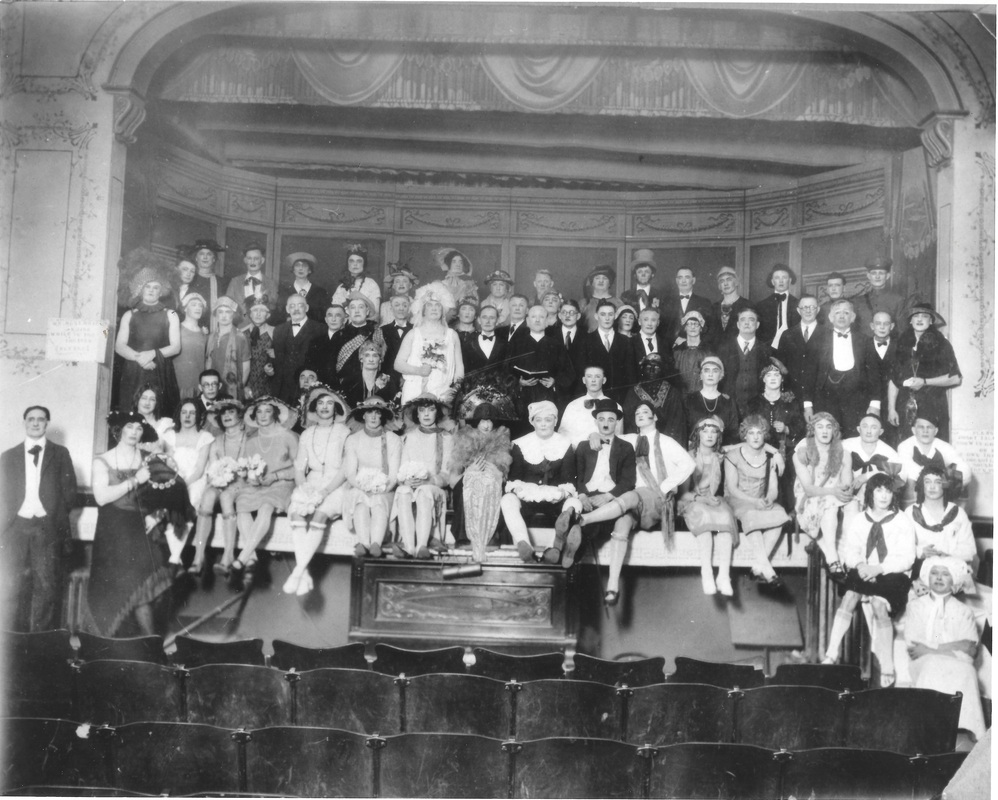 february 24, 1927 article about a performance of the womanless wedding in table rock

According to the article, the Woman's Club of Table Rock sponsored the play, in which 73 local men acted, playing both male and female characters.  15 people came from Lincoln! 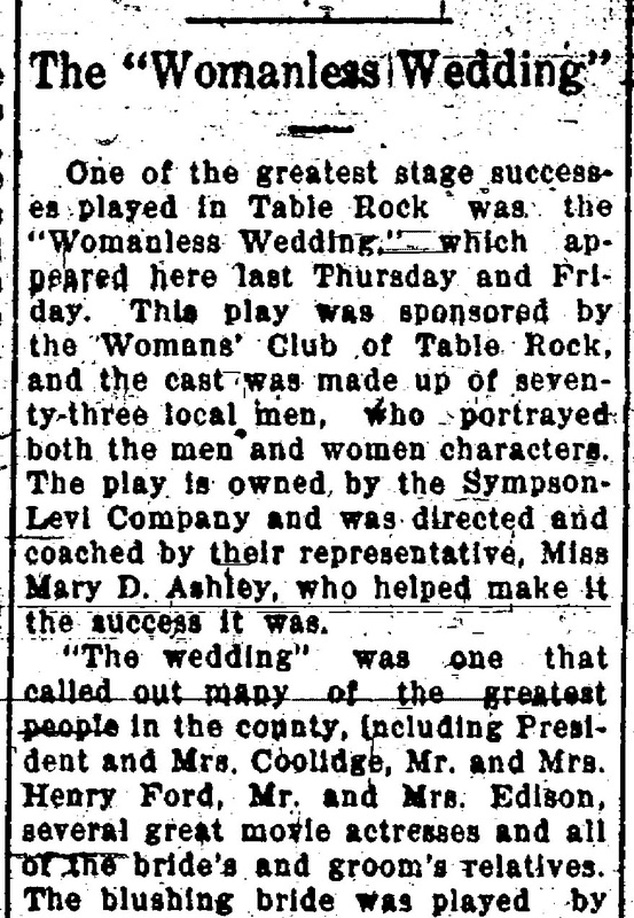 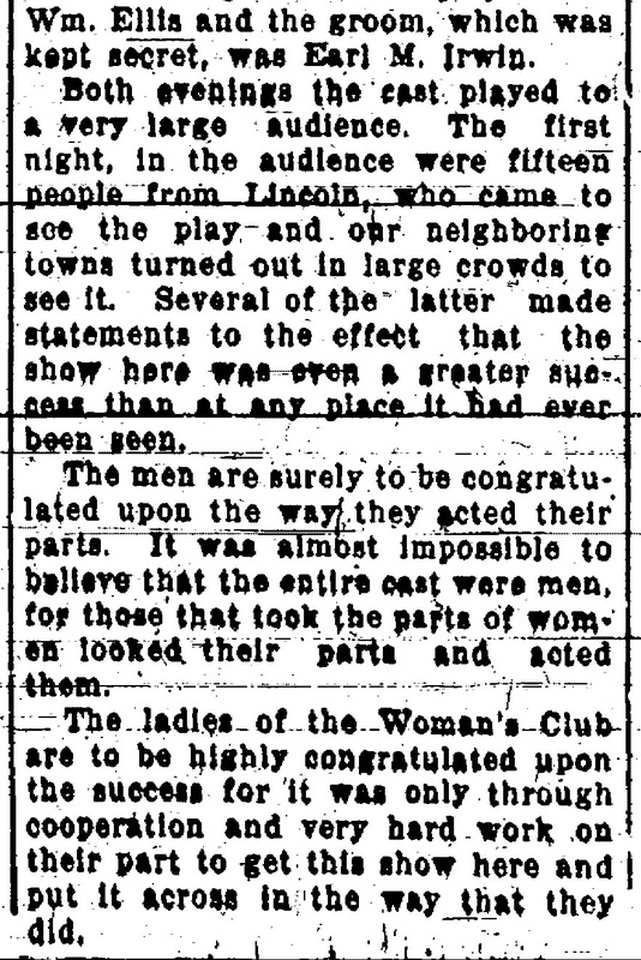 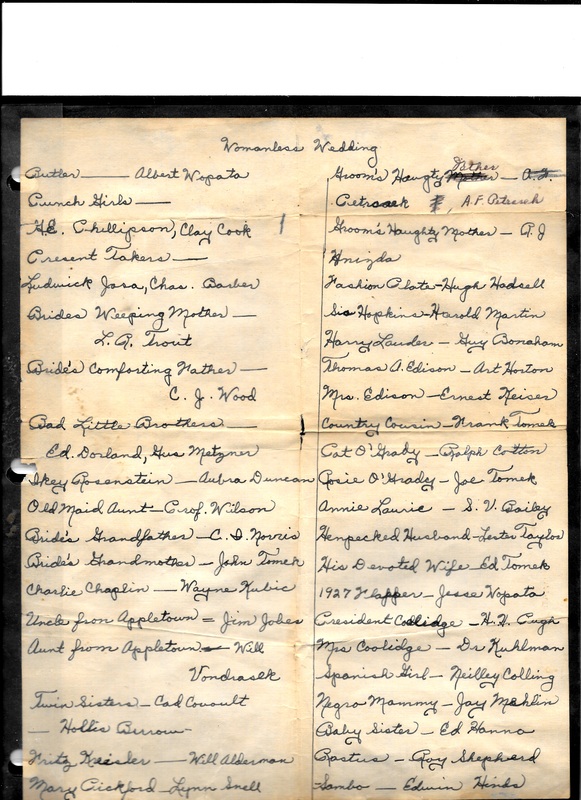 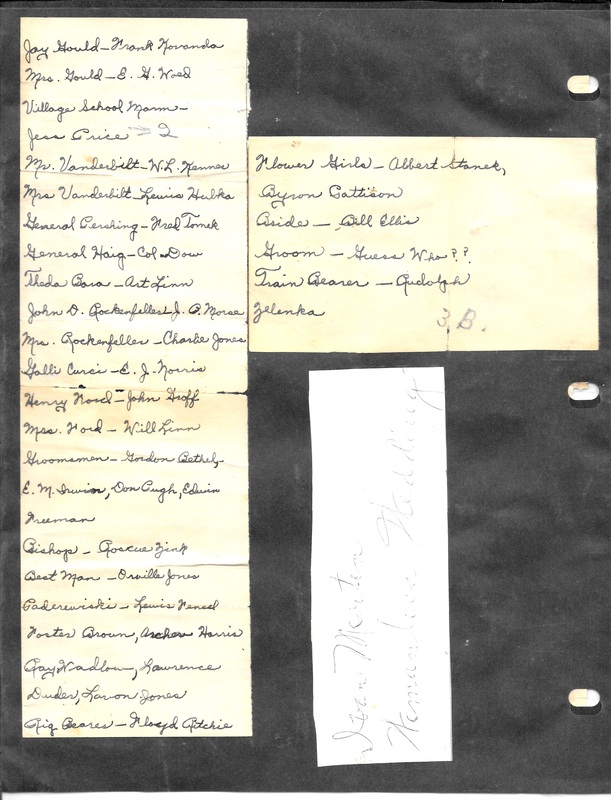 Photo 397: That long skirt is probably not being worn by a woman.... 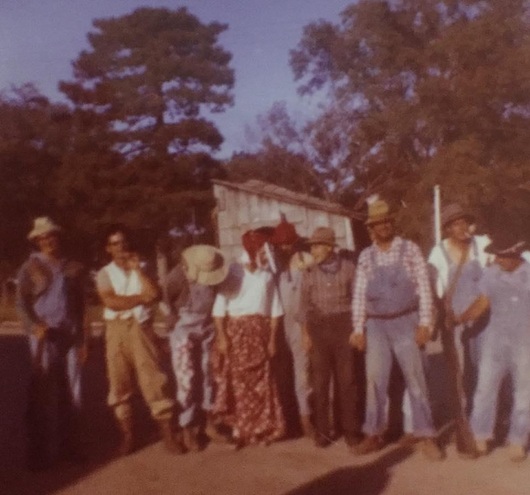 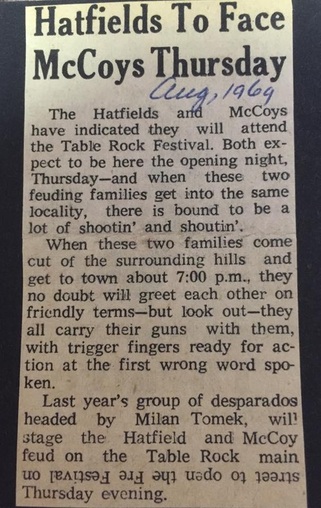 This dress thing is pretty recent.  1989?  That's only 26 years before 2015. The bandleader is Ed Hana, and the "woman" with the purse is reportedly one of the band members. He is not from Table Rock, but he nevertheless is breaking the law (as formulated in 1911!). 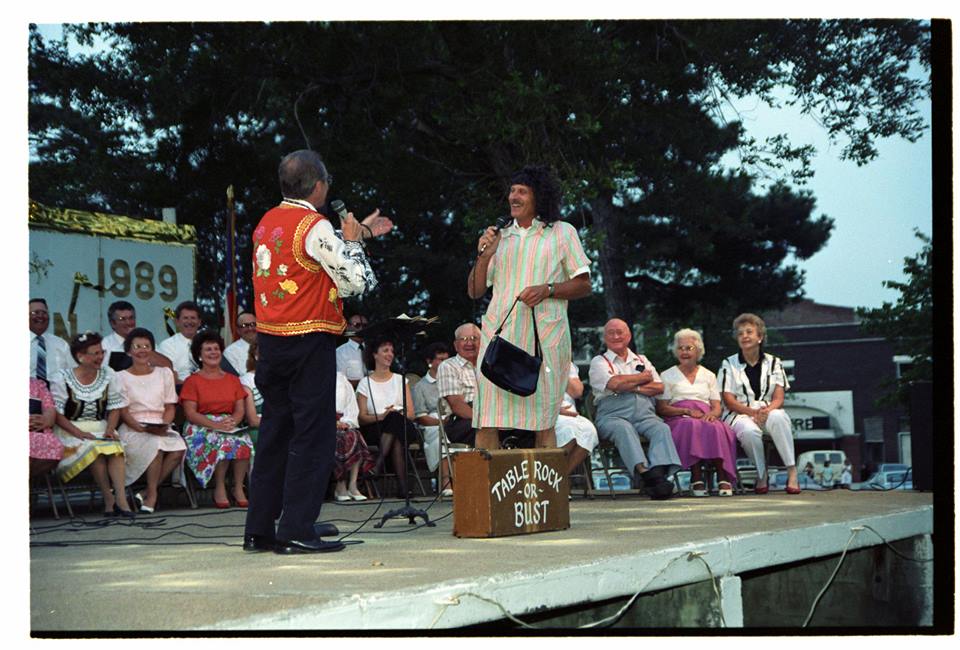