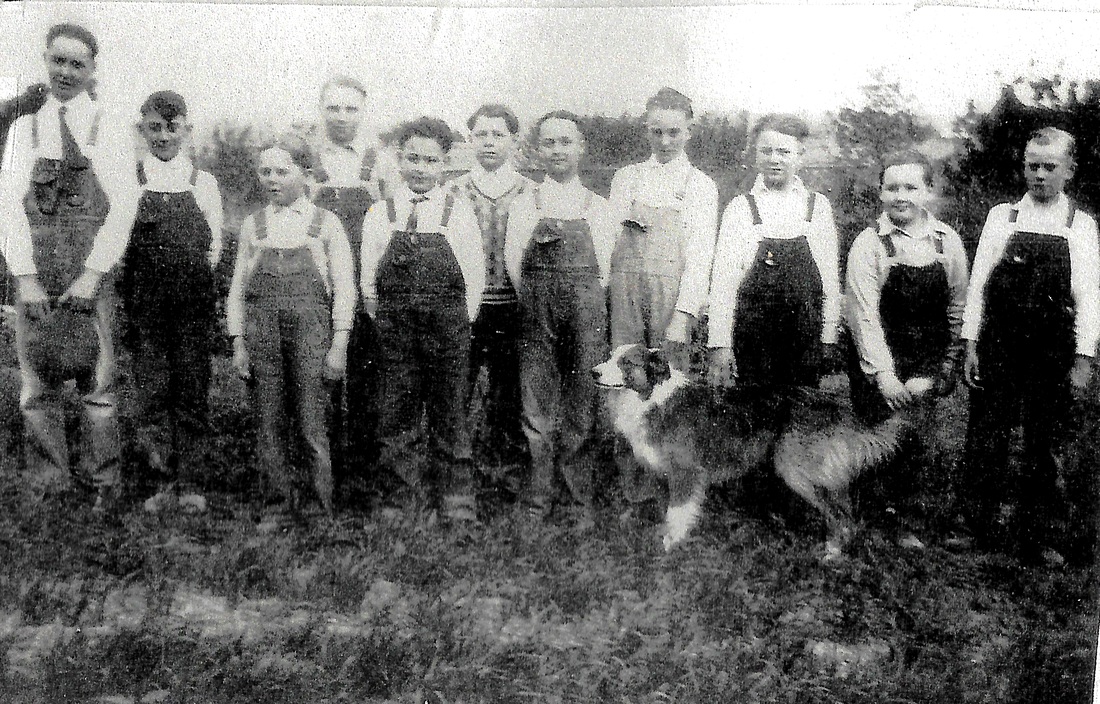 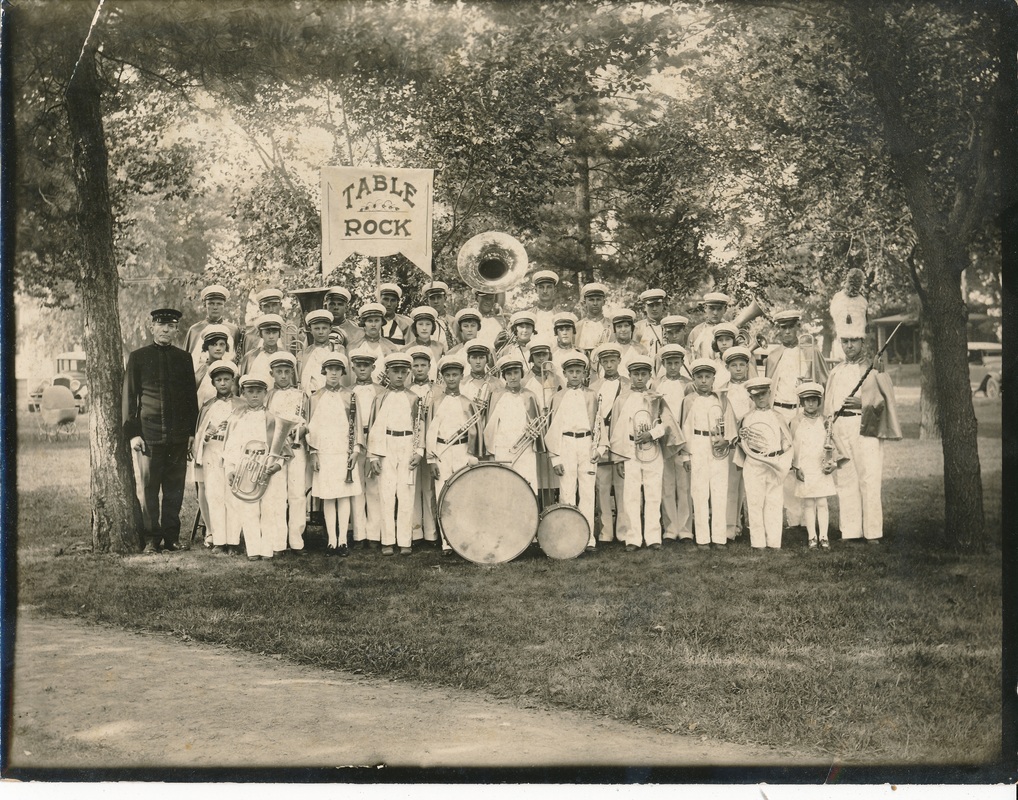 This is Photo 81, the Class of 1935; it is a photo of a photo; we have the original, but will need a larger scanner to get a better copy.

The photos are difficult to sort out, but Dwight is in the top row of 3, in the middle.  Marion is two to the right after that. 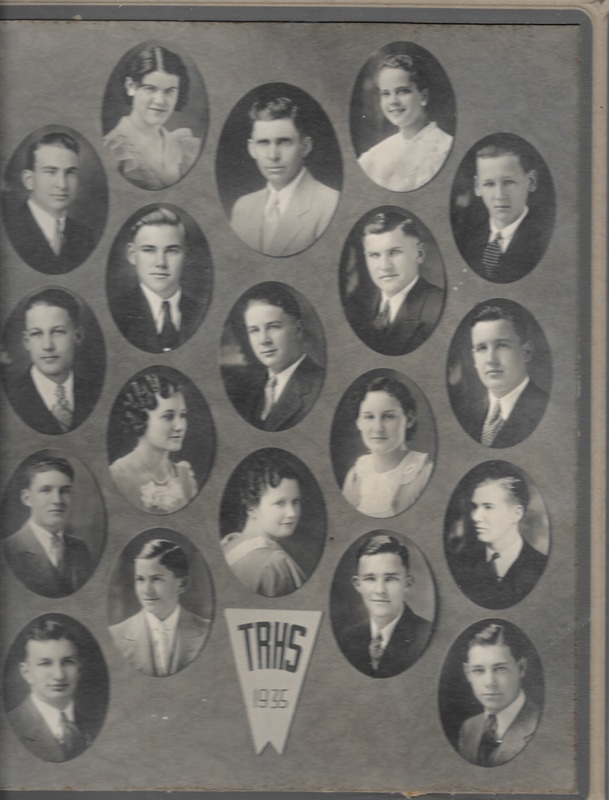 history of the class of 1935 by dwight bonham

Class histories were traditional and Dwight Bonham took on the considerable task of writing the one for the Class of 1935. He would have read it as part of the commencement exercises.  The intelligent good humor shows through what might otherwise have become a dry reading of names. 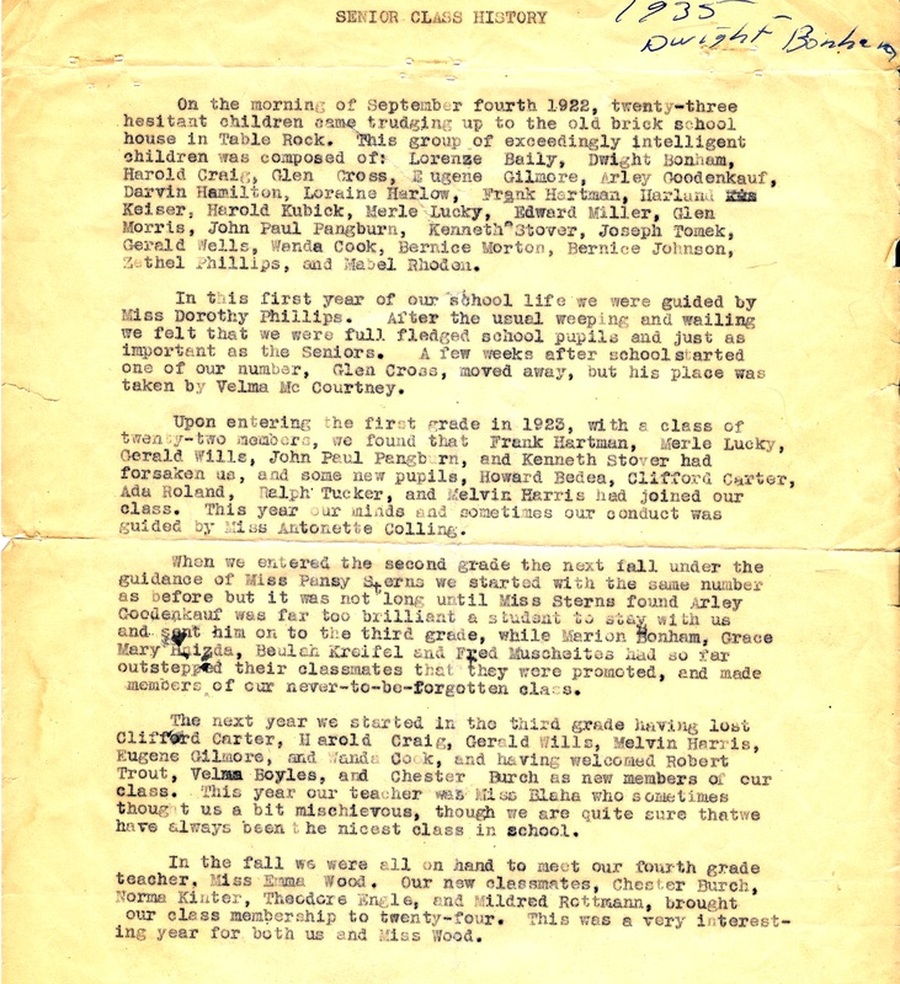 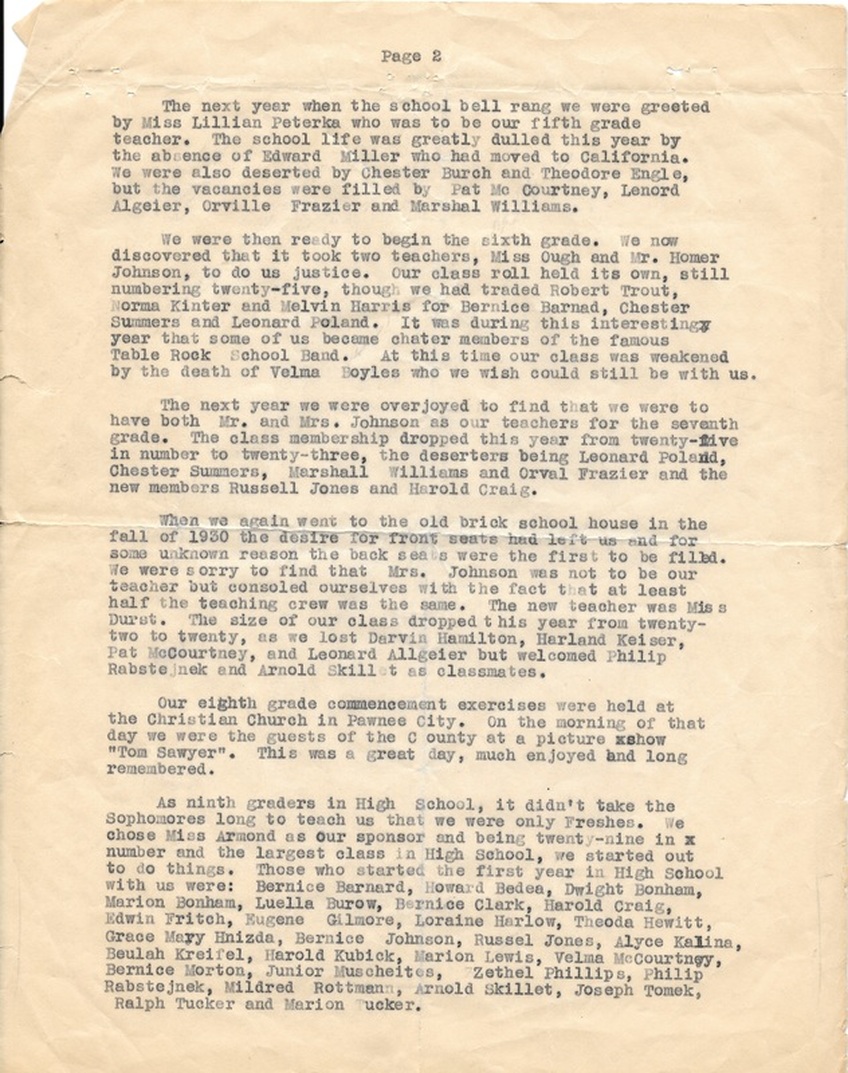 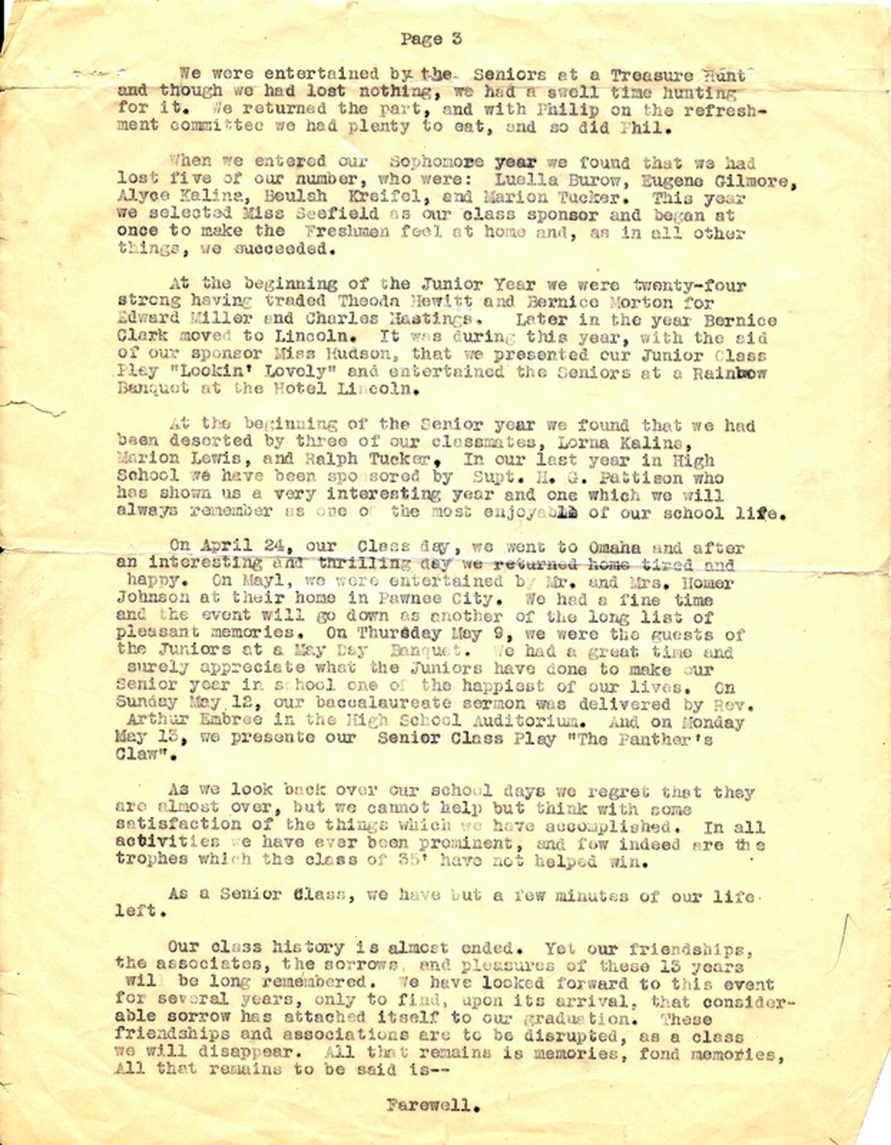 the bonhams and the
​state bank of table rock

The State Bank of Table Rock was founded in 1885, and in 1893 built the building that it still occupies, at the southwest corner of the Square.  In 1918, the Bonham family stepped in as owners, remaining for 40 years, through the local farm depression of the 1920s (long before the stock market crash), the Great Depression, World War 2, the Korean Wa....  Guy Bonham was the man at the window of the home town bank. 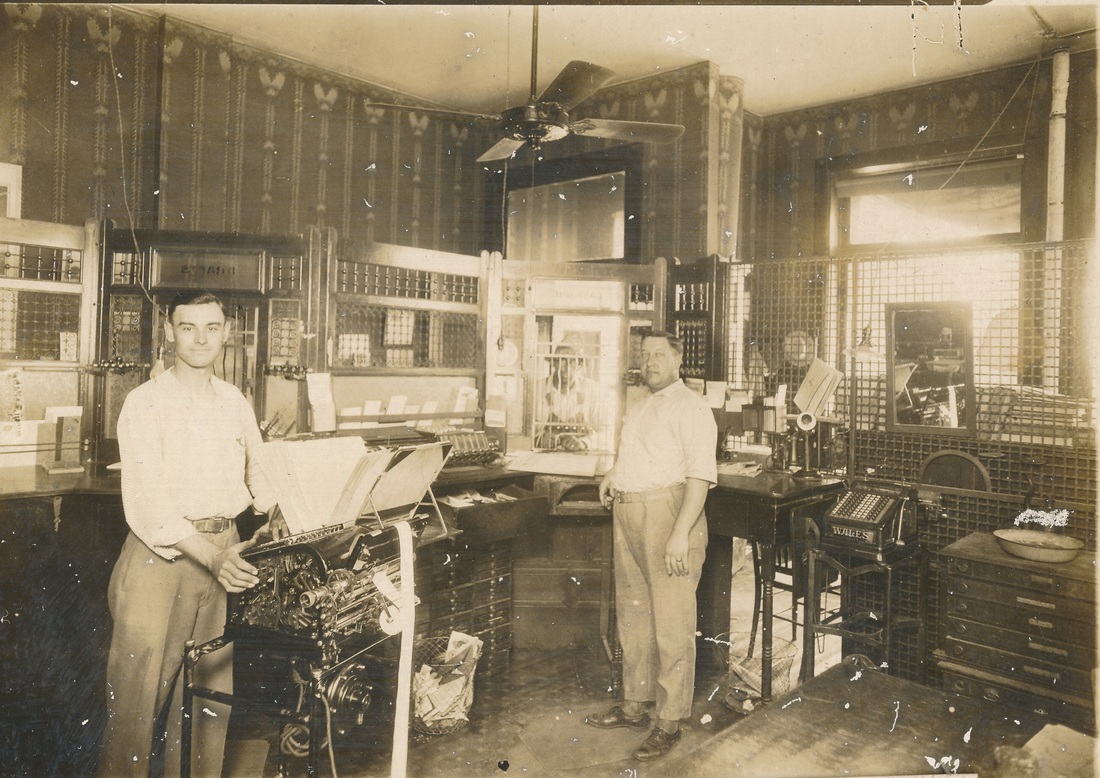 Photo 154, Guy Bonham at the State Bank of Table Rock, on the right. With him is Lawrence Duder. 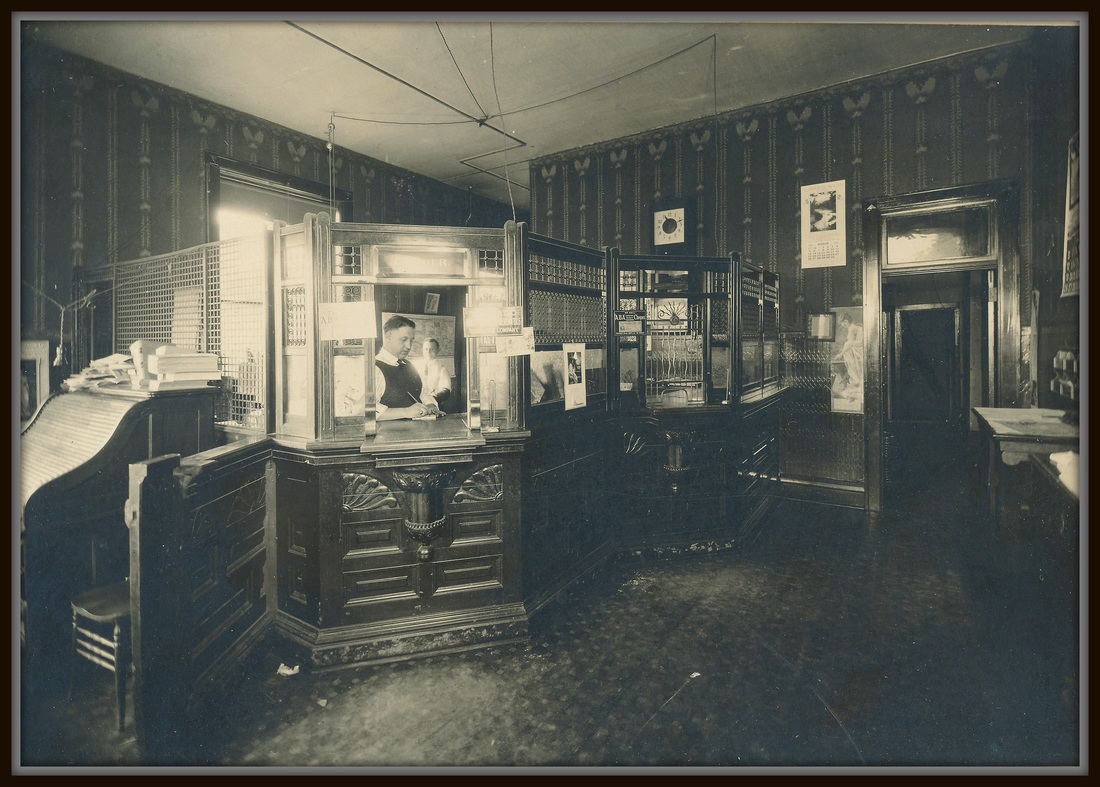 Who’s Who in Nebraska, transcribed at http://www.usgennet.org/usa/ne/topic/resources/OLLibrary/who1940/co/pawnee.htm

the bonham family picks their successor

In 1958, following the death of Guy Bonham, who was president and did the hands-on management of the bank, the Bonham family decided to sell.  The Bonhams did not rush in this process.  A Table Rock Argus article reported that they “desired to have the bank go into the hands of a man who would become part of the community.”

In the meantime, Bob Stillinger, who grew up in Columbus, Ne., having been a Navy Pilot veteran, and then graduated from the University of Nebraska was in the banking business in a small town in northwest Nebraska. He had always dreamed of owning a small town bank.  In a 2015 interview by Sharla Sitzman, Ethelann Stillinger of Table Rock  (Bob’s widow) told of Bob’s dream and recalled that there were few such banks available.  Then Bob heard that the Bonham’s were looking for just the right owner for the State Bank of Table Rock.   He came to Table Rock, loved what he saw when he met with the Bonham’s, they felt he was what the community needed.  They sold  their controlling interest in the bank to Bob who was 34 years old at the time.  He moved his wife and six-week-old daughter Roberta Sue (Bobbie) to town.  Asked how she liked Table Rock at the beginning, Ethelann said, “It felt like where we should be.”   Guy Bonham probably said as much in 1918. 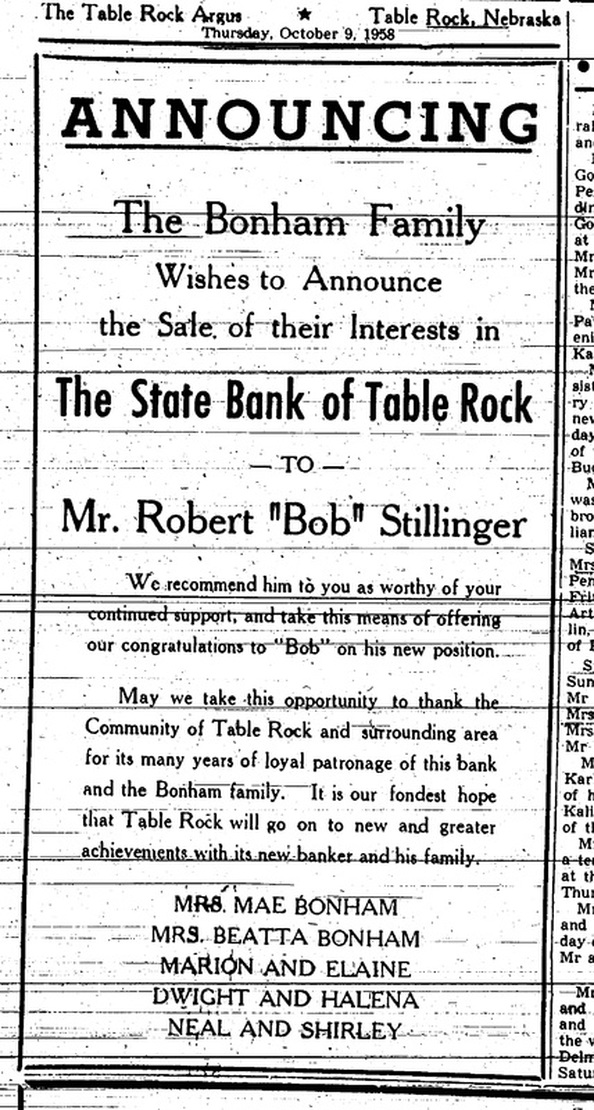 Marion & Guy Bonham were given a gift of appreciation for directing the music program during WW2 when the teachers were off fighting. Photo 792. 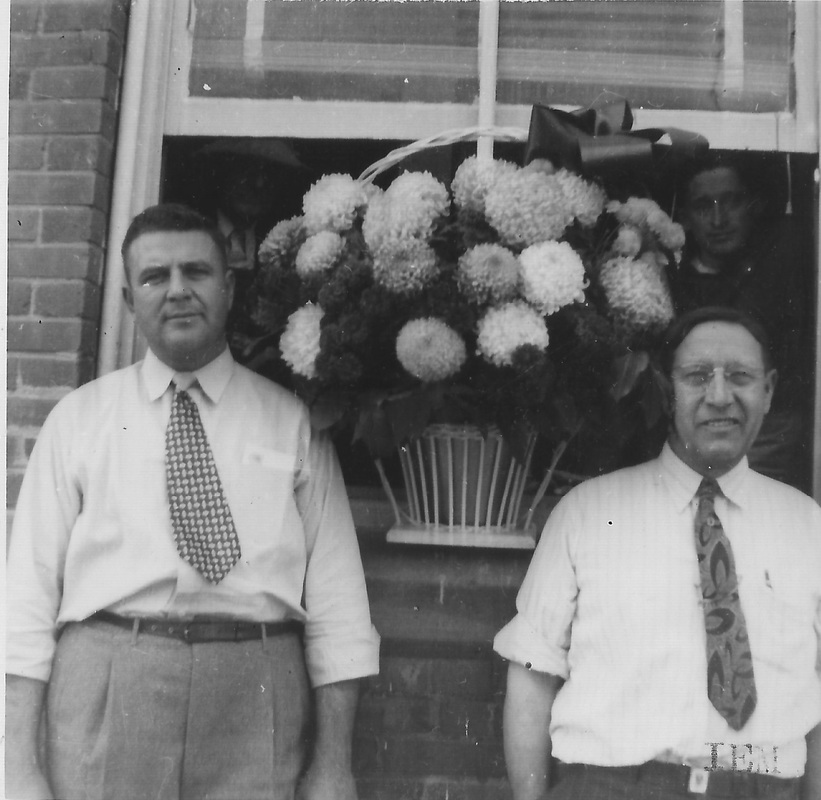 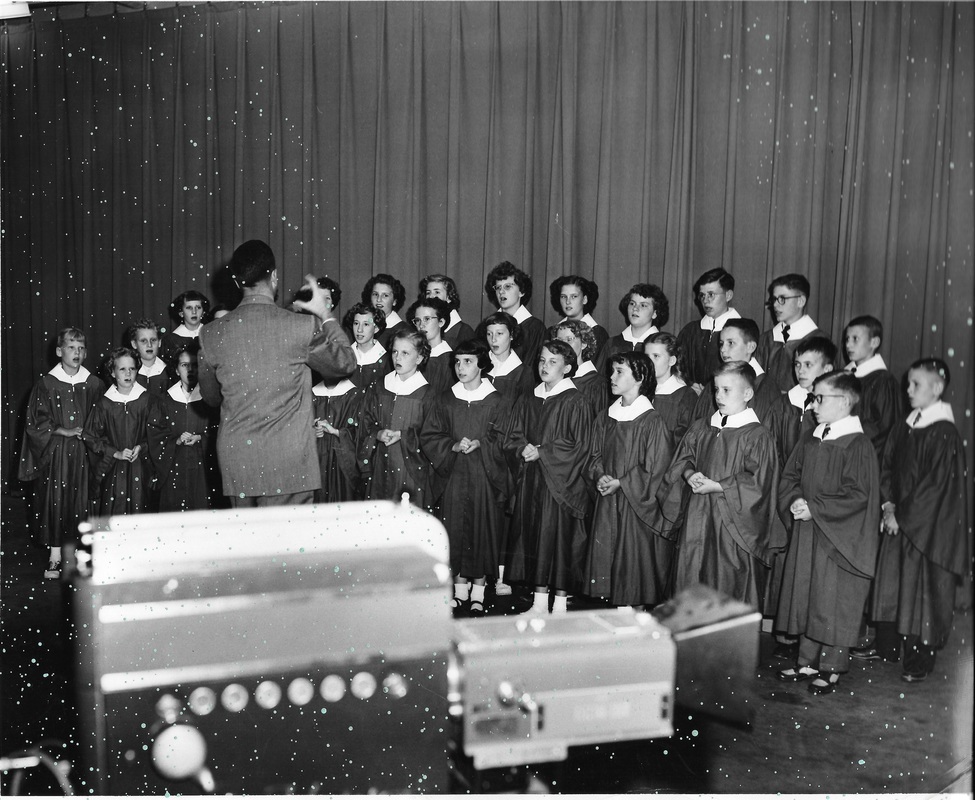 This 1953 photo was taken at a television station where the choir (which had been gotten together in about 1950) did a live broadcast. The students who are still with us well remember that big event!  Photo 35.
In 1982, some of the grown-up members of the choir gave a memorial performance for Marion, as reported in the November 11, 1982 Pawnee Republican: 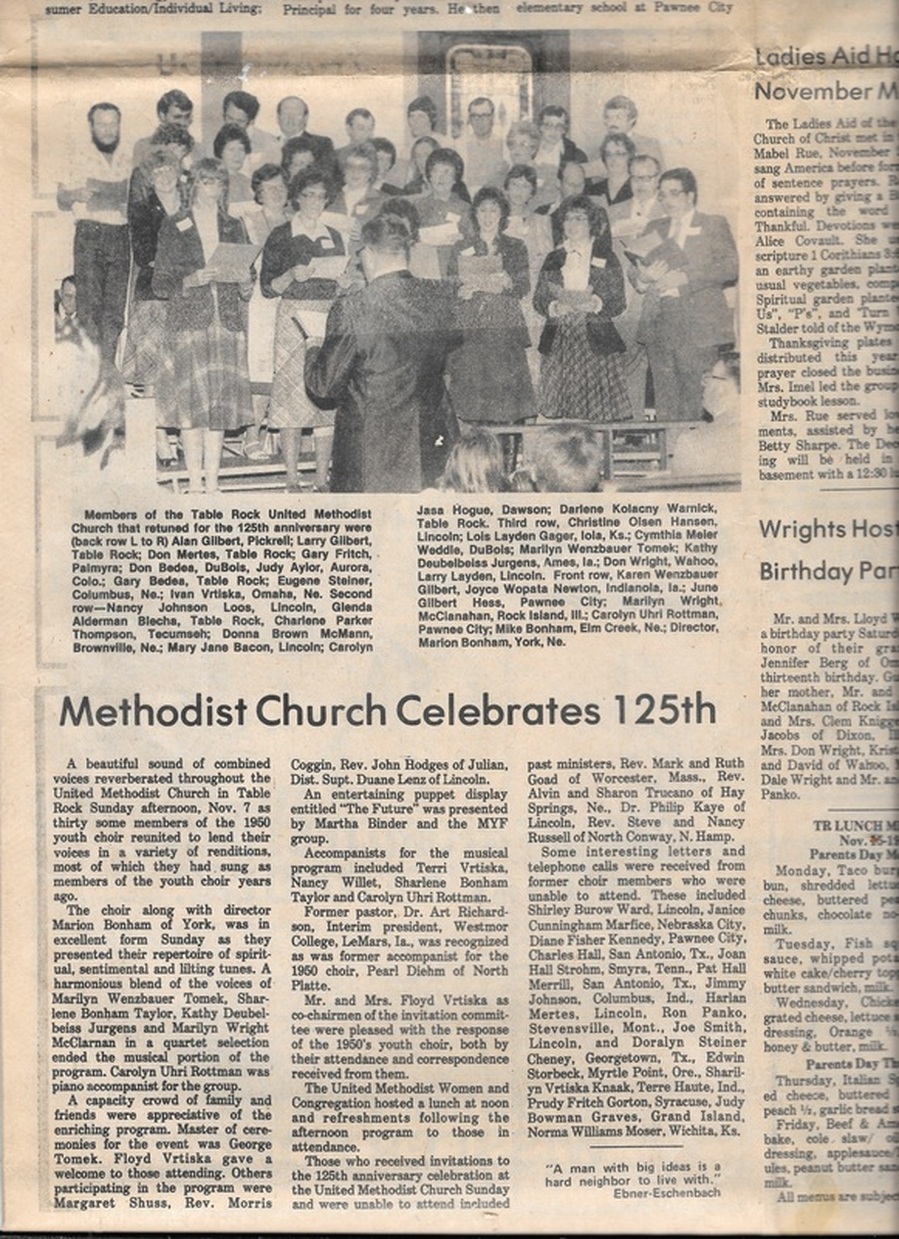