this page under construction

By Sharla Sitzman Cerra
My dad was born in the French Bottoms of St. Joe, Missouri in 1930 and died in Table Rock, Nebraska in 2013 at the age of 83.  He had lived in Table Rock for over 50 years.

the french bottoms -- home of his french immigrant
great grandparents 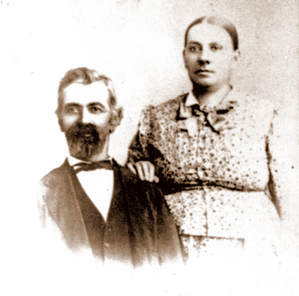 Nicholas & Pauline Didlo
Before the Civil War, Anna's father Nicholas Didlo came to this country from the Lorraine area of France.  His wife Pauline Calame may have been Swiss, because her own parents were married in Bern, Switzerland, a city straddling the German and French speaking parts of Switzerland.  Pauline had come to America prior to the Civil War as well.  Family lore has it that she came with her sister ***, and later brought their parents over.

Nicholas met Pauline when she was working in the city market in St. Joe, then described as the French market because a laage part of the produce came from truck farmers in the French Bottom.   My grandmother told me that all the men liked to go to the French market.  Nicholas discovered the beautiful Pauline there.  We don't know what she looked then, sadly.  We have only a picture of Nicholas and Pauline in their later years. It came from an album compromised of a large photograph of them and one of each of their children, by then adults. 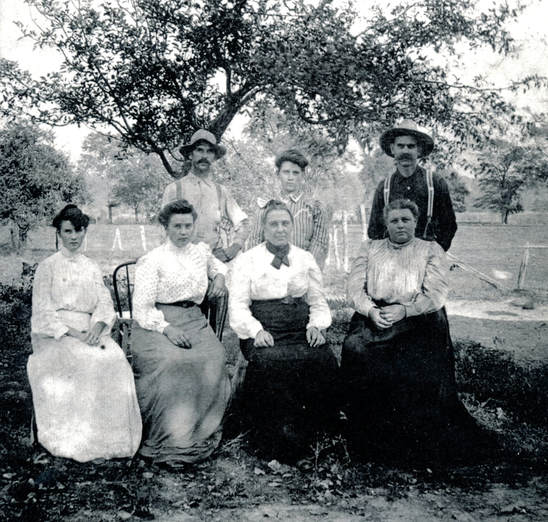 The children of Nicholas & Pauline Didlo Front row left is Marie Pauline, 2nd left is Laura (died during the 1918 flu epidemic), 2nd and 3rd are Vicky and Mary (or Mary and Vicky). Back row middle is Anna.
Nicholas and Pauline had seven children.  Anna was second from the youngest, and the especially lovely Marie Pauline the youngest.

All was apparently not warm and fuzzy amongst all of the siblings.  Vicky and Mary especially had a volatile relationship.  According to my great aunt Bessie Whitlow, her Aunt Vicky and Aunt Mary did not talk to each other for almost 30 years.  When the first one died -- I don't remember which -- the other was asked if she would make up with her sister and come to her side at her death bed.  She replied, "I haven't talked to her for 30 years, I don' know why I should start now."  What was the cause of this dramatic split?  Aunt Bessie could only shake her head.  "It was something about a setting hen," she said.  I asked my great Aunt Evelyne the same question and got the same shake of the head, and the identical response.  Nobody knew.  "It was something about a setting hen."

Moreover, there is a vague family story of what happened after Pauline died -- Nicholas had gone first.  Oliver became executor of the estate.  Anna and Marie Pauline being under the age of majority, he assumed control of their share of the estate, and when they became of age, there was a strong belief that the girls were not treated financially well.  They did get a share paid to them, and the family homestead was divided amongst the children.

When Geoge and Anna got married, they were of course poor.  George got a job connected with the railroad.  He rode "chicken trains" that went out to New York.  He had the menial job of caring for the chickens on their one-way journey.  He was gone an awful lot of the time.  "It will be worth the sacrifice," he told Ann, "This will build our savings."  It was a hard time for them.

the eggerts, immigrants from german

The family moved to Nebraska when he was still a child and they lived on a farm outside of Peru. There, they had many neighbors who were good friends, including some who ended up in Table Rock -- George & Blanche Kreifel (Babe's parents) and Alice Schneider's family.
Dad was working for Sears when he met Mom, a country school teacher north of Elk Creek at a little school called Twin Oaks. He put together farm equipment that farmers had ordered. When I was born, he was a hired hand working for a farmer named Elson Wiles, near Syracuse. He went to other jobs; by the time I was five and we moved to Table Rock, we had lived in Syracuse, Tecumseh, Julian, and Elk Creek. Dad worked for Binder Brothers for a while then struck out on his own, with a Sinclair gas station, junking, hauling grain, and finally the saw mill. He was always happier working for himself.
One of my favorite memories of my dad is that he always had a paperback western in the pocket of his overalls. He couldn't stand not having something to read at hand. I still have a lot of his westerns, which I dip into along with headier fiction.
Anyway, this is my dad as a baby and my dad around age 75.
View My Stats