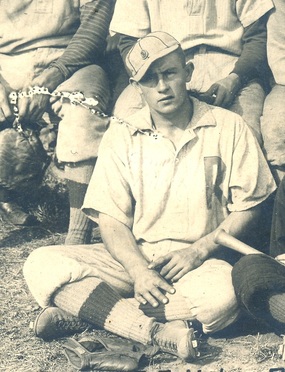 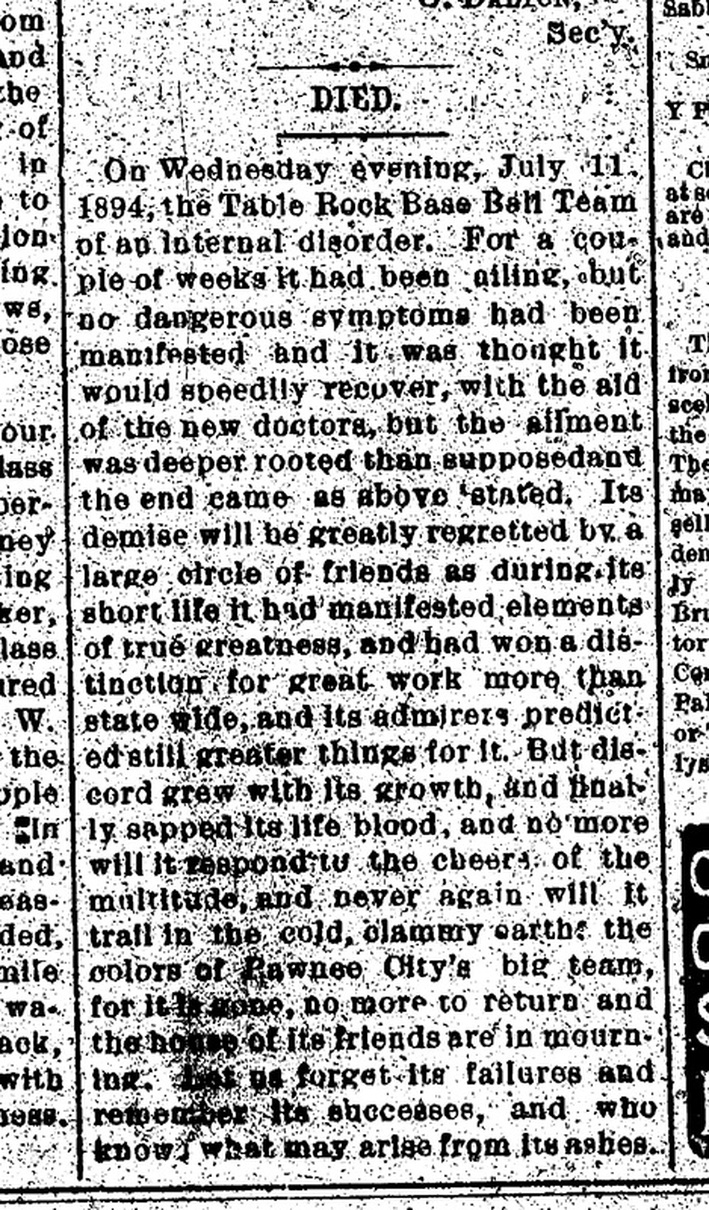 July 18, 1894, the team rose from ashes.  Judkins and Faulker resigned, Fellers and Anderson stepped in.

July 13, 1894 - a THIRD article about baseball in the same edition of the paper. The TABLE ROCK BLUES versus the Beatrice Giants.  Jim Faulker, Fusty Bowen, Ed Gettle, and "Covert" were cited:

September 27, 1894, Table Rock sports included baseball and horse racing.  Sounds like the baseball games were at the horse racing field (the "driving park").

Photo 214, championship baseball team, undated.  Only Ernie Wilcox and -- Bob Myer??? (to the left from Wilcox -- are identified. 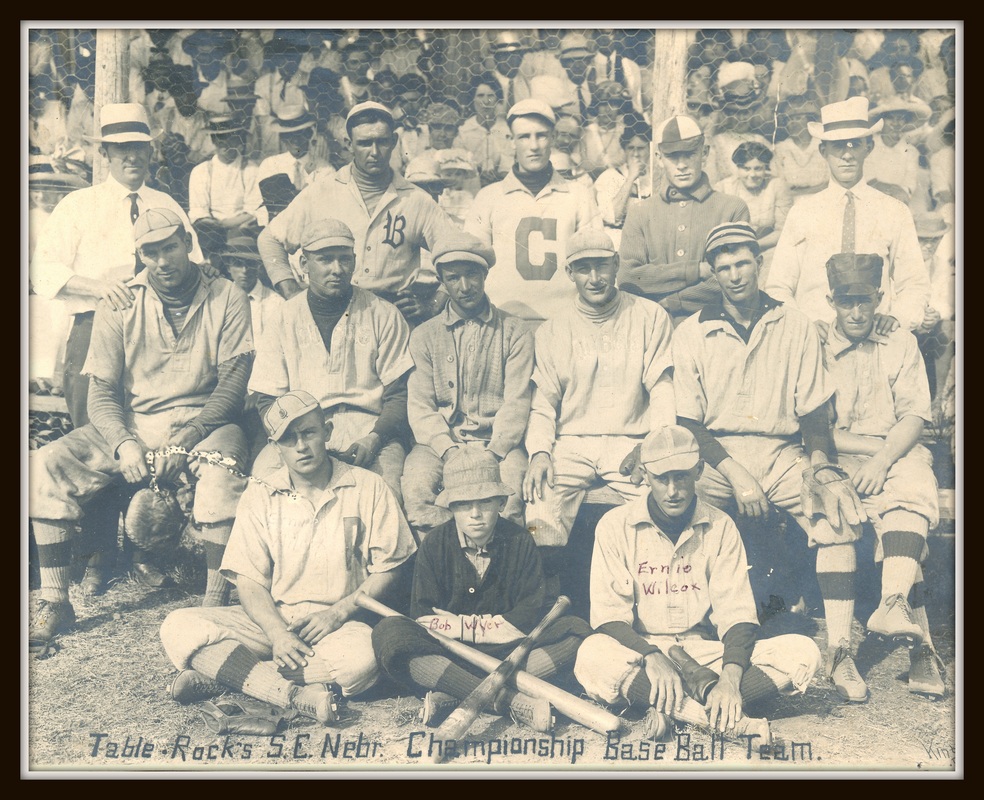 great article about baseball
​in the area

Opening day for baseball is just around the corner! Sunday baseball has a long history in the area. Charles Obrist wrote a wonderful article for the Pawnee Republican (May 5,1985).   The article refers to Table Rock, and I think you will probably know many of the names mentioned in it.

The death of Elmer Wehrbein in December 1984 brought back many memories of “Small Town Baseball”, when every small town had a team of some kind.

As far back as I can remember the names of N.A. “Nick” Steinauer, Joe Gyhra, Roy Templeton, Ira Kinkade and Pete Wenner were some that kept baseball alive in the Village of Steinauer and its surrounding area. I never saw them play but many tales were told of their ability and they were our biggest boasters as long as they lived.


My folks moved near Steinauer in 1912 and I soon found my idols of Sunday baseball. The diamond was northwest of Steinauer in Nick Steinauer’s pasture where a grandstand was built. As small boys we used to think we were in a special group if we could just carry the glove of some of these idols out from town to the ball diamond. Our admission to the ball game was to chase foul balls that went over the grandstand during batting practice and during the game. This was before the First World War


The players that always left an impression on me were George “Tubby” Frey, catcher; his brother Irvin “Ty” Frey, short stop; Ernest “Peanuts” Steinauer, pitcher; Alfred “Red” Krueger, pitcher; Frank Conradt, center field; Mart Morrissey, 3rd base; and Lawrence “High Pockets” Boehmer, 3rd base; were the most of them I can recall at this time.


Baseball in these small towns just about died during World War I. In the early twenties Rev. Otto Krueger, pitcher, who was studying for the ministry and Maurice “Timber” Huff, 1st base, played at Pawnee City.


In about 1922 Tubby Frey and Maurice Huff had the courage to try to get a ball team going. They picked up high school boys: scheduled some games in the rea and we ended the season winning about half our games. Some of the team members were Irvin Frey, Leonard “Penny” Gyhra, his borther, Albert “Boob” Gyhra, Norbert “Snort” Steinauer, Chuck Obrist, Timber and his brother Emmett Huff and Bill Rucker. Baseball interest was again coming alive. In 1923 the Modern Woodmen Lodge was quite active here and Joe Simon, local rock Island section foreman, took over the management of the Woodmen team.


Late in 1923 Steinauer really acquired some talent that left their mark in the southeast Nebraska area through most of the 1920’s. Our source of new talent came from the “Cow Pasture” teams around the area. W.G. “Billy” Phelan came from Lewiston to catch for us. He was 10 to 15 years older than most of us and gave us a lot of experience, knowledge and guidance from his catching position. At about the same time Wilmer and Elmer Wehrbein had created a lot of attention in the “Cow Pasture” games. A pair of identical twins had the area teams buzzing with their pitching ability and were soon more than ready to show some of the town teams’ opposing hitters what a whistling fast ball and curve ball were like.


In the spring of 1924 John Urich took over the team management. John operated the local soft drink parlor and by then baseball fever was really hot as the businessmen and the community purchase us new uniforms. I was about 16 years old and it took me several years to grow into mine. It would fit better today!!


While Elmer and Wilmer were mowing down the opposing batters by striking out about 15 per game, all the rest of us just had to give them some support and get some runs. We took on all the eams in the area, most from larger towns and won most of our games that year.


The following year Herman Krueger, local mail carrier, took over management. He played left field and the third of the ball playing Kruegers, brother of Alfred and Otto. The rest of the regular team was Billy Phelan, Wilmer and Elmer Wehrbein, Penny Gyhra, 3rd base; Boob Gyhra, Lawrence “Bill” Obrist, center field; Chuck Obrist, 2nd base; Fred “Fritz” Wagner, right field; Oren “Scrappy” Bledsoe came from Lewiston as infielder and “fake” softball pitcher, sometimes relief duty. Tubby Frey and Jerry Steinauer, a rookie, played part time and anytime Maurice Huff, Otto and Alfred Krueger came to visit we usually found a place for them.
We had two exceptionally good seasons under Herman Krueger and then he broke his leg sliding into home plate playing Falls City at Steinauer. Clifford Schroff managed the team in 1927 and by that time we thought we had conquered most of the surrounding teams.
The team broke up the next year. I really don’t know for what particular reason as there wasn’t any dissension or ever was.
In 1928 Bill and Chuck Obrist began to play for Table Rock and before the season was over many more from Steinauer were playing over there. I believe during this time the Wehrbein Boys and Billy Phelan began to play with Tate. Their diamond was west of Clarence Tegtemeier’s. They soon had a good team and won at least one Southern Gage Co. League Pennant. Sometime after maybe even before this Wilmer and Elmer, Bill Phelan, Penny Gyhra and Chuck Obrist played a season or two at Graf. I’m not so sure all of these events are in their proper order because about 60 years have passed. I have been asked how I or some of the few players that are still alive at this time, can remember all of these many details, especially about certain games, because we may not even remember by night what we had for breakfast!!


Some of the players of the surrounding town that left an impression on me as players and gentlemen off the field: Summerfield had their Bob and Johnny Smith, pitchers and their brother, George, catcher; Wymore Burlington Shop Team had “Toots” Kirchner, 1st base; “Sleepy” Patton, left field; “Humpy” Campbell, center field; Bob Wier, catcher and Jack Dalton, catcher. They would “spike up” with an imported pitcher when they played Steinauer. Liberty had Norman Fentiman, pitcher; Francis, his brother, catcher, Jack Cole, pitcher and the one and only Harlan “Squeelie” Pyle, pitcher. Virginia and Jerry Kozak, pitcher, Frank Krandall; Filley had Taylor and Lon Jackman, pitchers; “Squirrely” Noakes; Harold Yohe, pitcher, possibly “Swede” Jensen. Crab Orchard had Jim Sheik, catcher and “Wildhorse” Griffin and several of his brothers.Sterling had Val and Ed Zink, Pitchers, Bill Ehmen, catcher; Bill Christline, 1st base; “Bronc” Smith, pitcher; Christy Eaden, infielder. Burr had Louise Gentzlenger, pitcher.

Many others helped to keep baseball alive in Steinauer in later years. Marvin “Dutch” Hays and Fritz Wagner managed a team for several years. Marion Sommerhalder more than did his share to keep a team going for several years.
During the Forties and Fifties, I well remember Clary Gyhra, Norman Rinne, Elmer “Tuggles” Vrtiska, Bob Schmit, all-around players; John and Charley Conradt, Laren Siske, Logan “Bus” Schroff, “Spied” Morrissey and Ray Hothan, to name a few. Also, Harold Hoffman, Howard “Powerhouse” Sommerhalder, Willard “Fritz” Hoffman, catcher and his brother Norman, pitcher and Eldon Tegtmeier. I Hope those I have forgotten will forgive me.


Jerry Steinauer came to the team a good all-around field and baserunner. “Scrappy” Bledsoe played short stop and worried the opposition a little with his “faked” spitball.


More players that left their mark in the area “Rusty” McCalla, in his younger and more streamlined years, as an infielder and Dewy Strom, pitcher from Bern, Kansas.


Many tales, true or otherwise, could be told of the feats of Elmer and Wilber Wehrbein. We had been accused of changing them in the pitchers box with notifying the opposing manager or in the lineup.


No way could I ever forget Irwin Smutz. We replayed many ball games in his barber shop and we won them all!!!
I could write many tributes to the good friends I made through the years, even among those of the Tough Opposition.
I only wish the present generation could even enjoy half as much as we did, the Sunday afternoon Town Baseball Games.
They didn’t require a “Federal Grant” to have a place to play.

August 2, 1900 -- The Argus calls foul after Humboldt wins, accusing them of a team full of ringers: 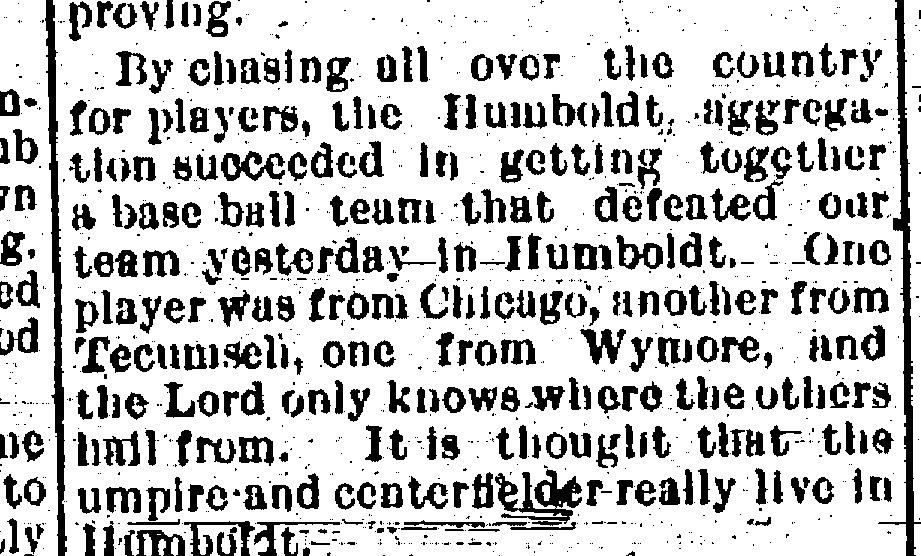 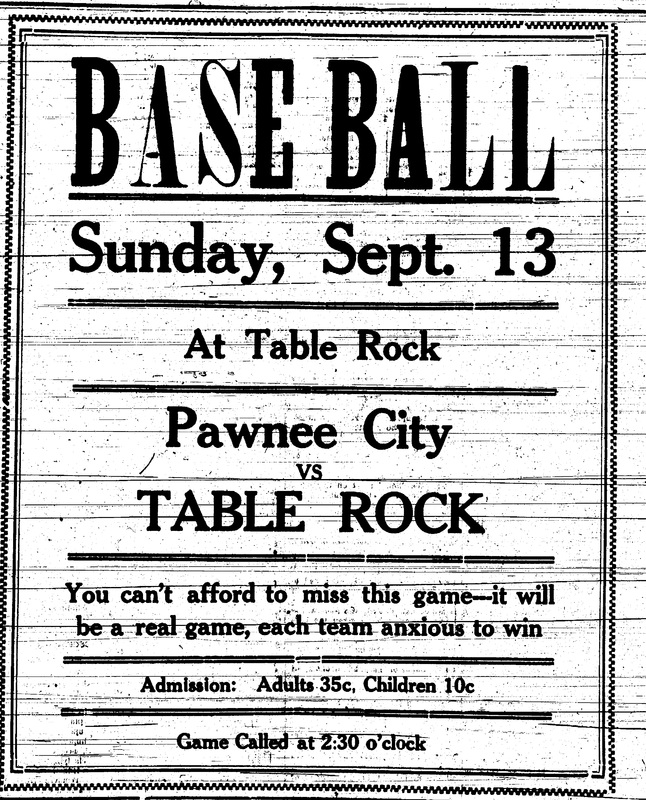