in praise of table rock

1856 - "it has been recently laid out in a fertile and beautiful section of the country near the great natural curiosity in eastern neraska...."

This is an excerpt of an article in the August , 1856 Nebraska Advertiser newspaper of Brownville, NE.  It speaks of various towns in southeast Nebraska.  After a discussion of Archer -- which was then the county seat of Richardson County and now no longer exists -- the article turned to touting the famous Table Rock, which does still exist.

1859 - "the beautiful village of table rock, almost surrounded with fine groves of timber and splendid slopes for building sites."

Excerpt from an article in the February 16, 1871, Nebraska Advertiser.  (The first train pulled up to the Table Rock depot in November of that year.) 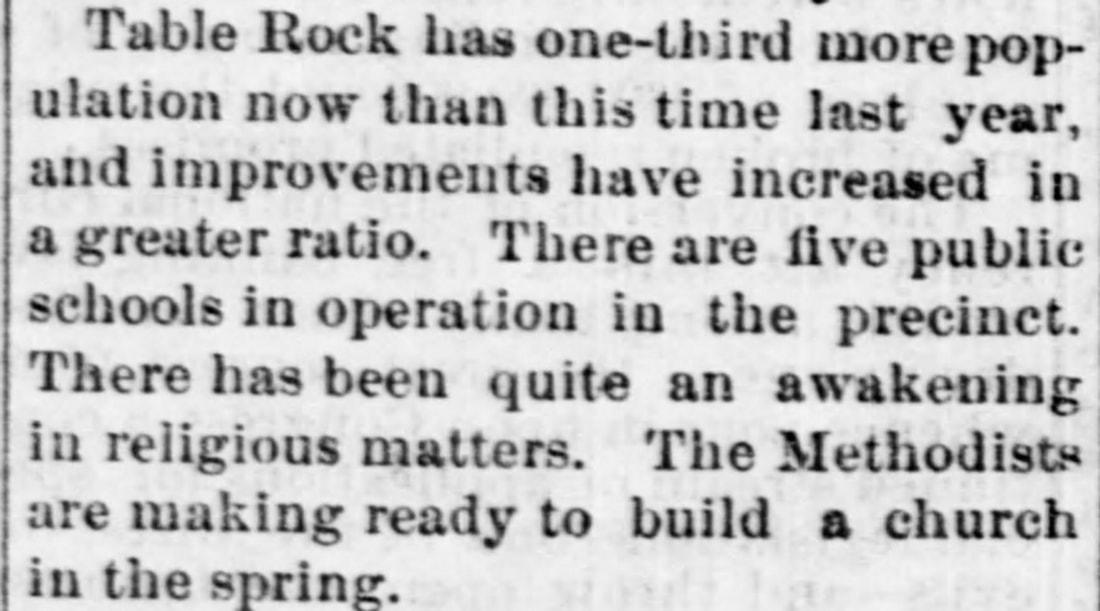 The Methodist Church that the article refers to was built in Lower Town. It was mid-block on what is now Highway 4, between Taylor Branch and Vine Street.   After the church moved uptown to its present location in 1882, it was used as a residence. It is gone now, but was a small white house.  Rudy & Hulda Zelenka lived there in the 1960s, and after that the Garry Harris family. Following a fire, it was eventually torn down.

1872 - "quite a town, with a number of residences and business houses having been built."

Excerpt of an article in the June 20, 1872 Nebraska Advertiser newspaper. 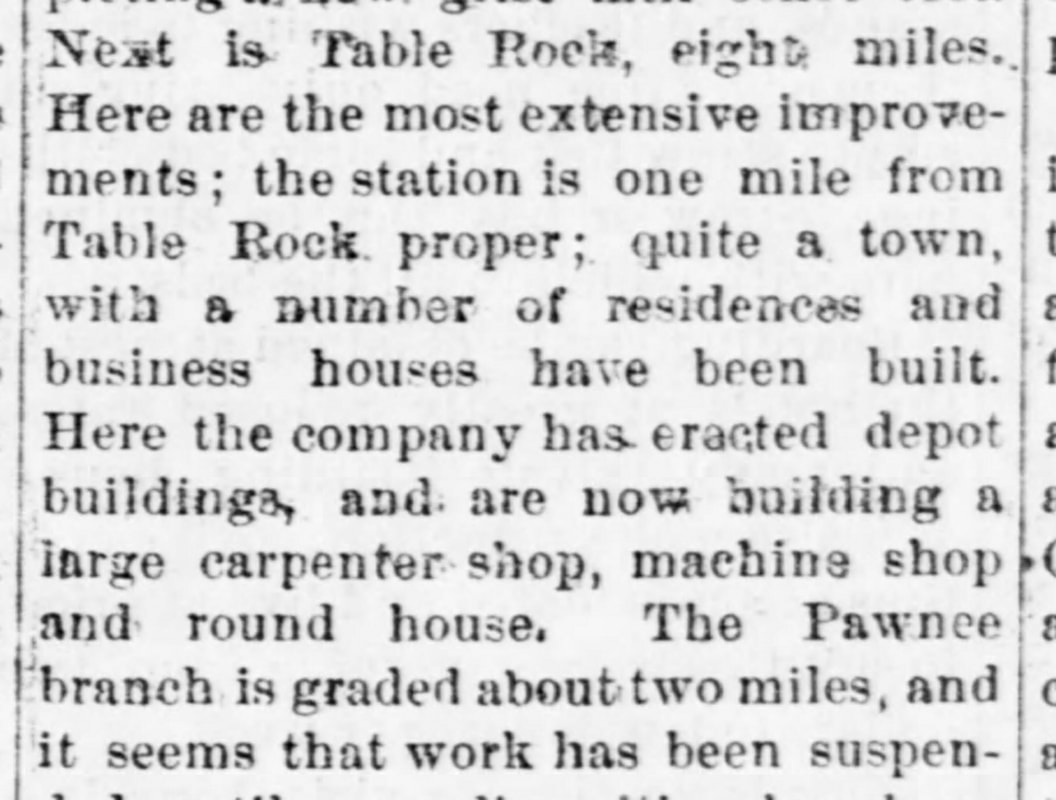 The October 15,1874 Omaha Bee had an article giving "sketches" of towns on the Nemaha, including Table Rock.  It also listed many of the businesses men and businesses, presumably paid advertising: C. H. Norris, the postmaster but also a merchant, for example. 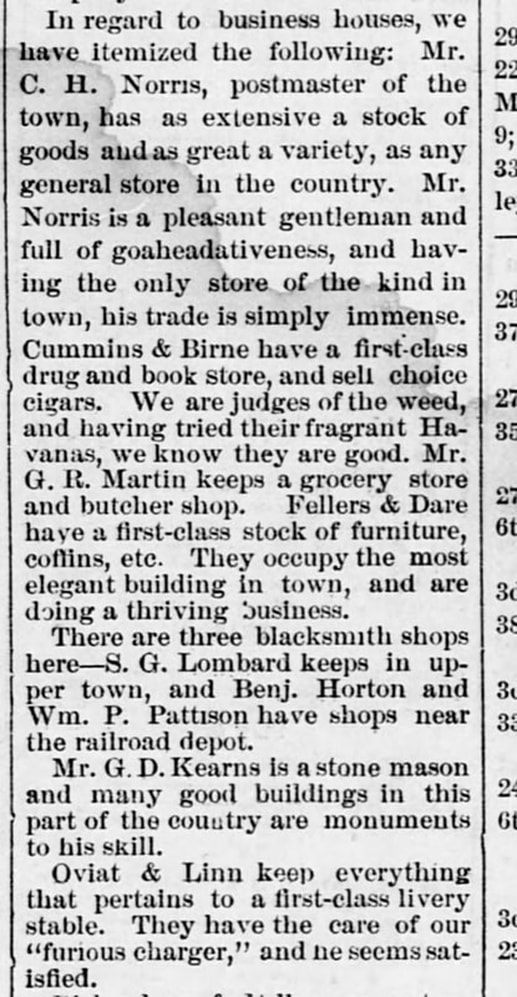 The August 12, 1877 Nebraska State Journal featured Table Rock.  Table Rock had begun a period of significant growth after the railroad arrived in 1871.  This is an excerpt from Table Rock from an article that described the various towns along the railroad, one by one.  This article begins after a description of Elk Creek, and from there the reader is led to: 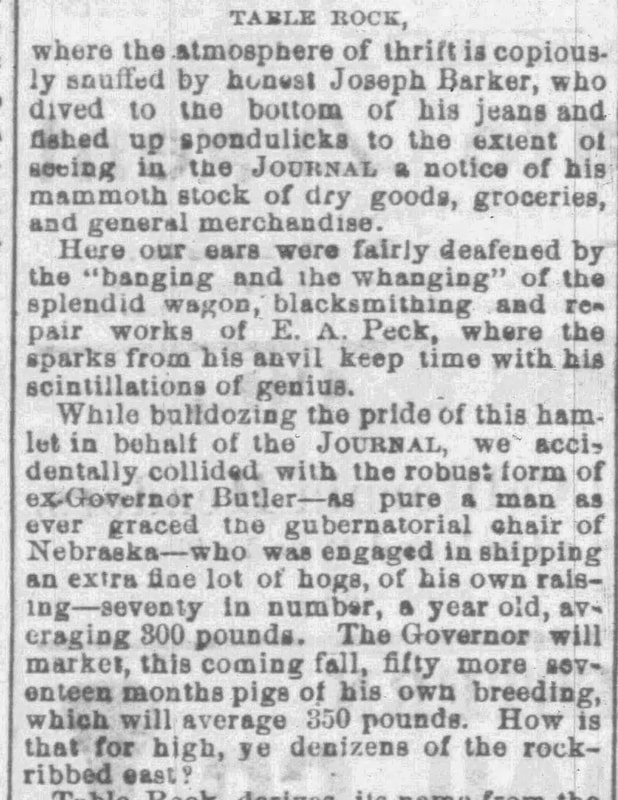 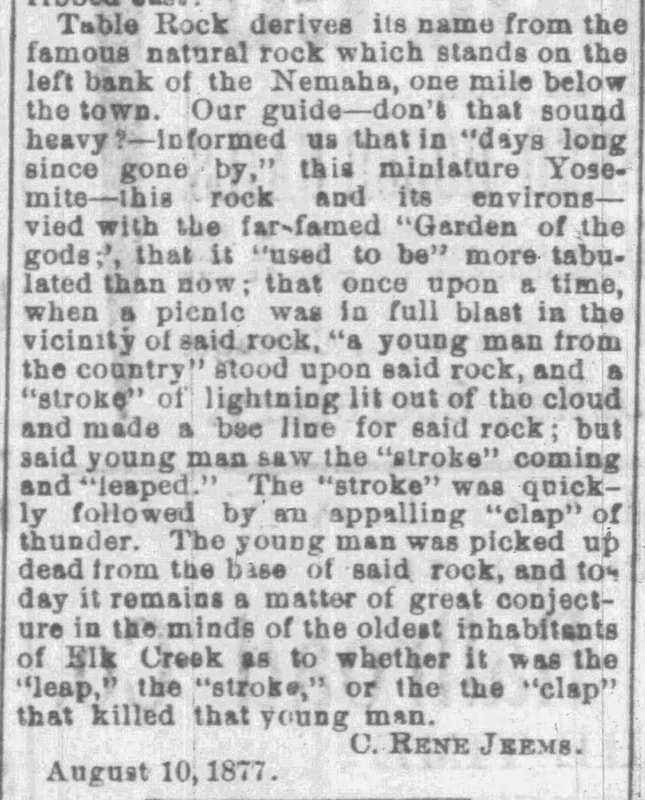 1878 - leaving table rock for pawnee city, "an hour cannot be more highly enjoyed than behind a good team...."

Excerpt of an article in the May 3, 1878 Nebraska Advertiser 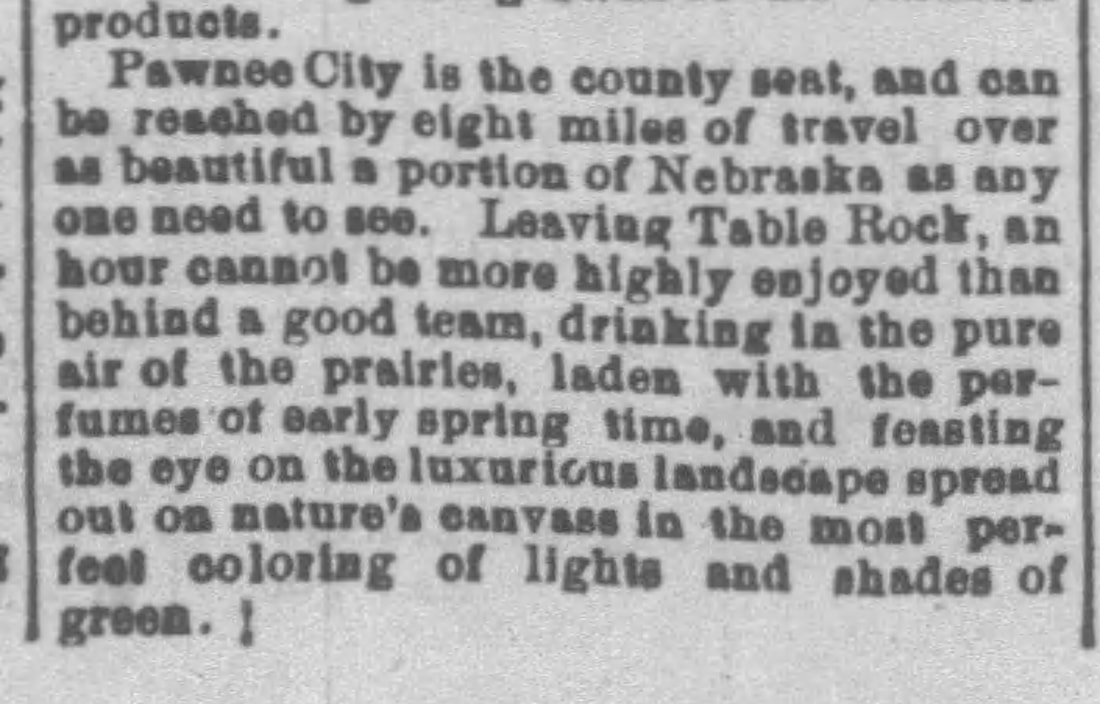 From a railroad propaganda booklet aimed at emigrants, A Guide To Southeast Nebraska, put out in 1878 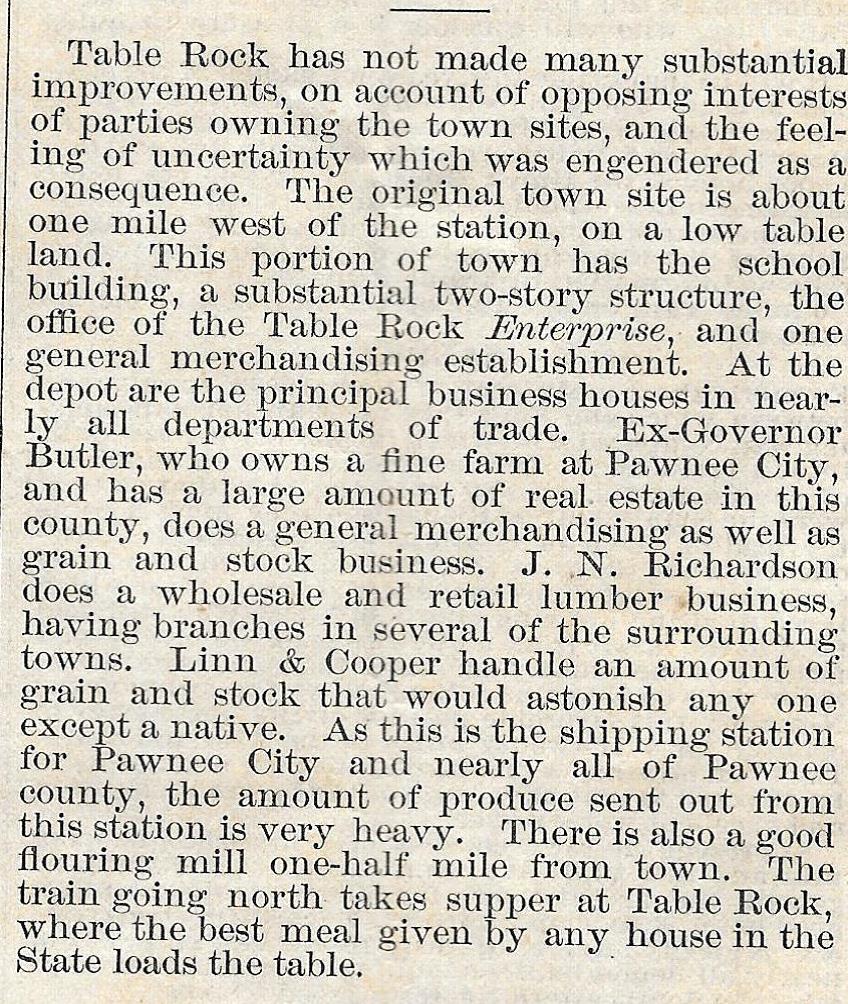 From the Andreas "History of the State of Nebraska" book, in which are compiled histories of all the counties and numerous vanity pieces about leading individuals.  The Historical Society has a copy of this book, here reprinted from the Kansas State Historical Society website. 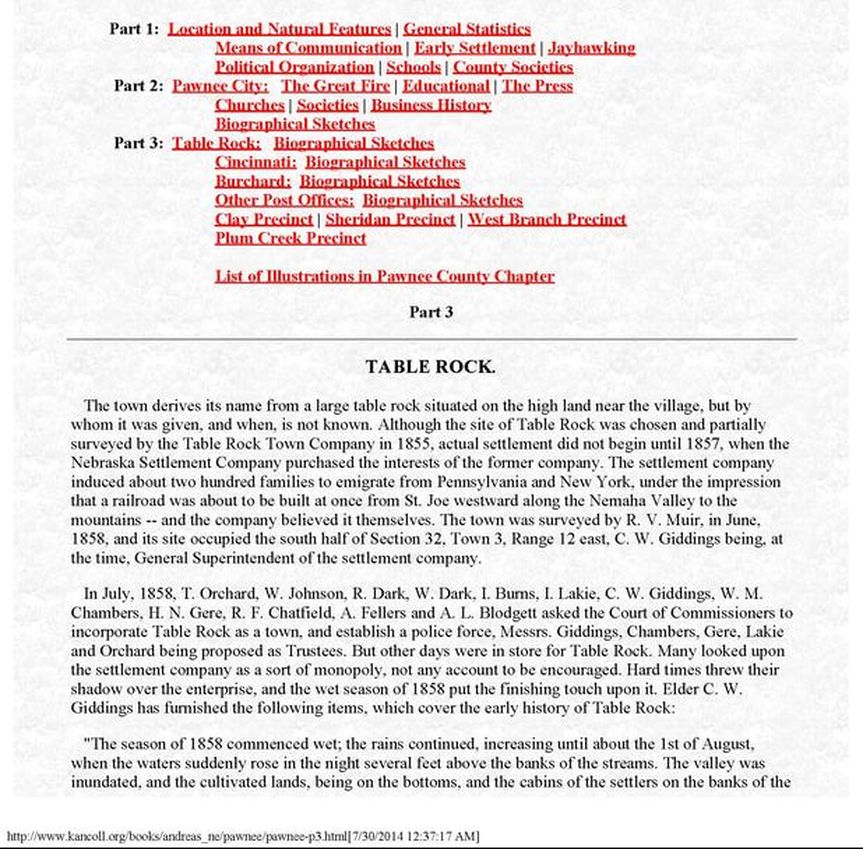 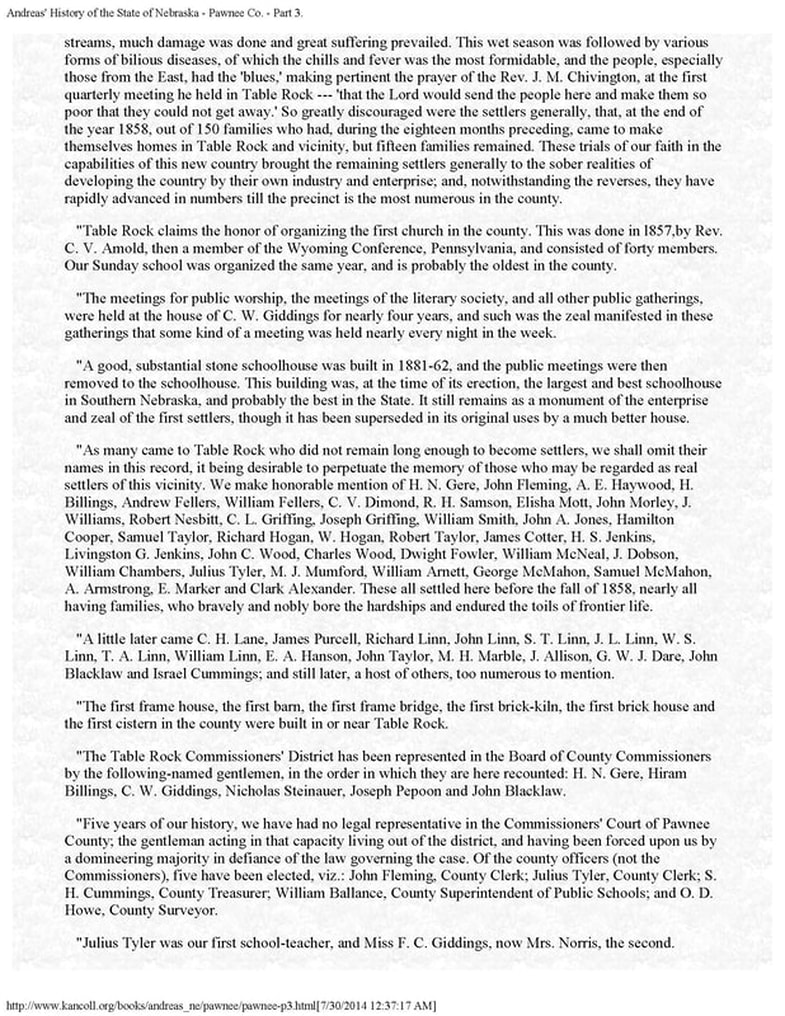 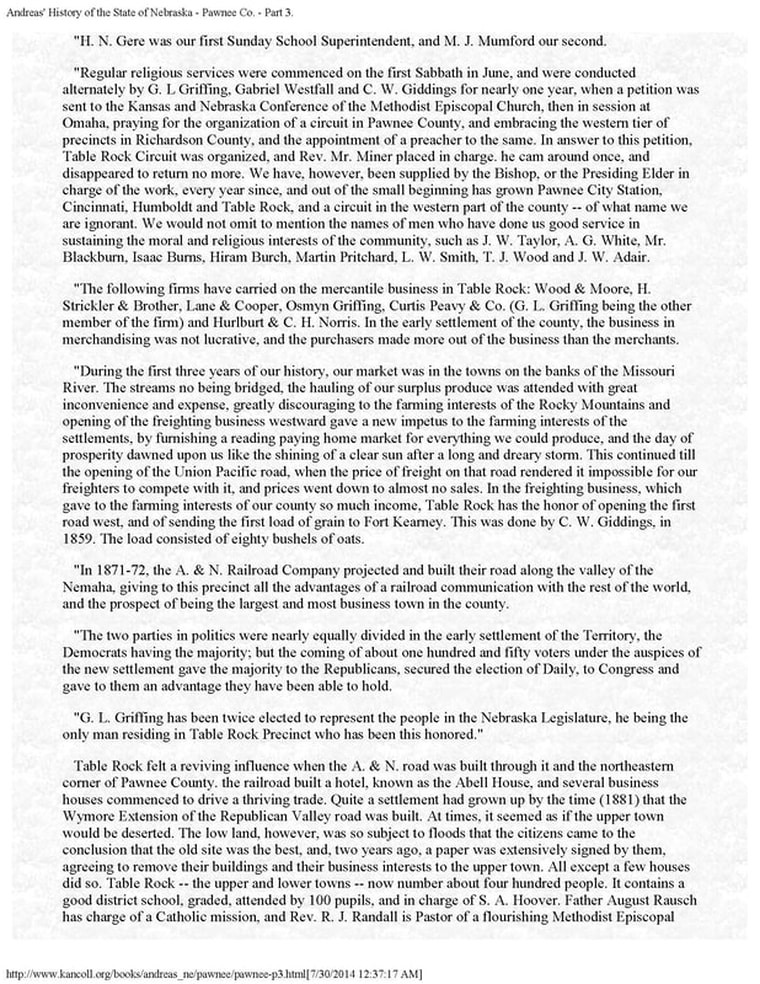 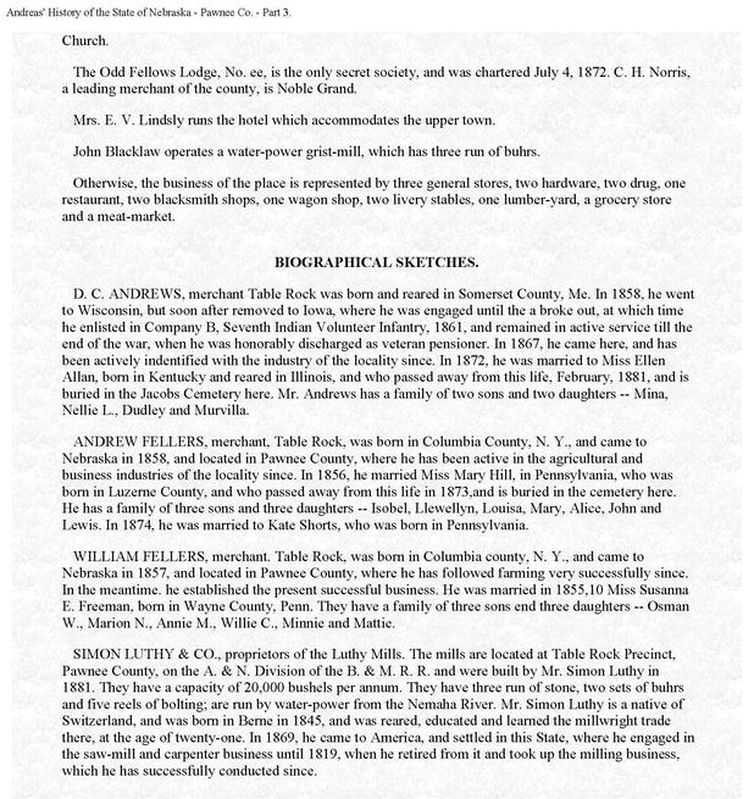 ​1905 - "they have one square set out with forest trees. it is a beautiful grove...The town is built around the grove."

An official from Indiana wrote from Table Rock about his trip there. He talks about the brick and clay industry, mentions the park, and more.  This article is from the Huntington (Indiana) Herald.

1914 - "we eminently excel in railroad advantages" and natural resources

The town made an aggressive pitch for the state to take over the Table Rock brick factory .  Two extensive articles in the March 20 & 27, 1914 Table Rock Argus painted a picture of Table Rock as a happening town that would be a good candidate for the prison system.
Part 2 from the Argus edition a week later 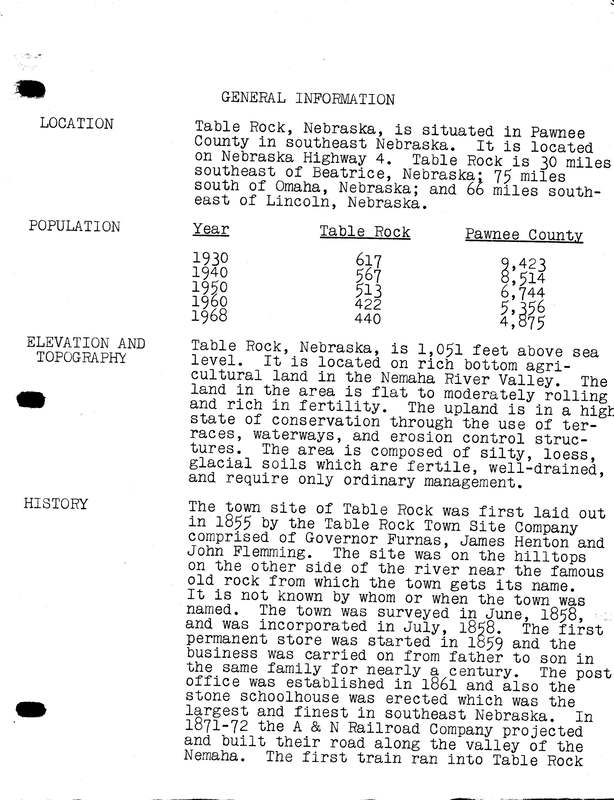 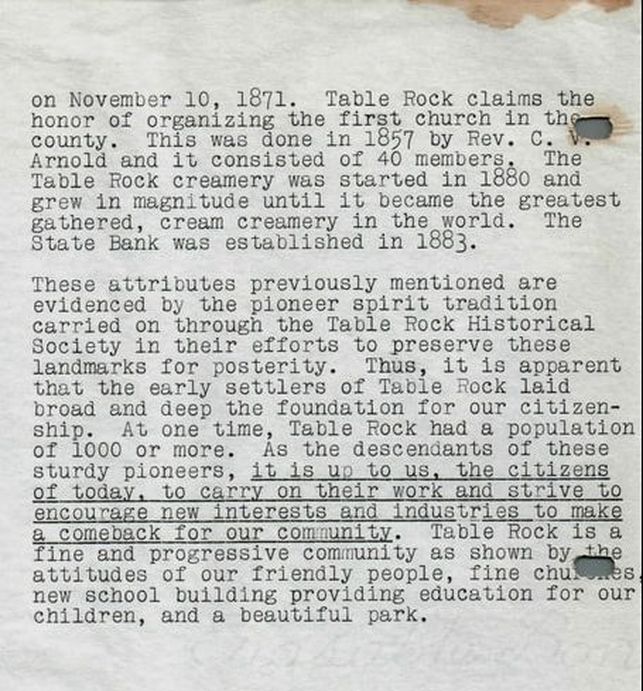 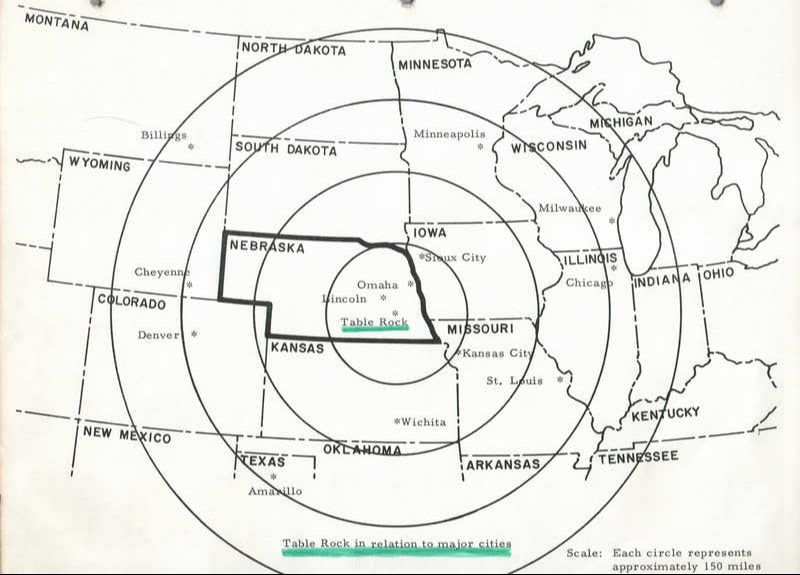